What to wear to Barcelona? 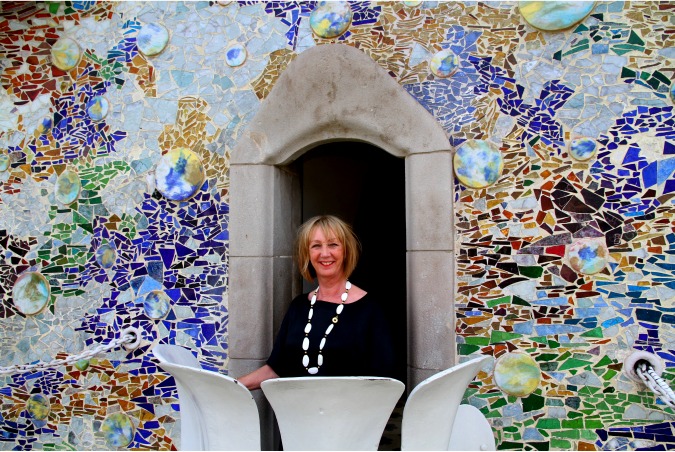 Knowing I would want to do a post about my little city trip, the big question was of course: what to wear to Barcelona? The temperature for those three days was going to be 25, 28 and 30 degrees Celcius which is very warm for me. Also, high heels (my favourite) were out of the question. Hours of walking is not something you do on high heels. Well… very few of us do. How to look nice on flat shoes with hardly any clothes on?

Light weight, was the answer. And… trusted ballerinas with support soles in them. So I started with the shoes and worked my way up. As we were only to be there for three days, it wasn’t too difficult. The “we” in this story are Lia and me. Lia, being one of my two best friends. We have known eachother since secondary school, from when we were 15/16. She is the best person to go on holiday with. Never, ever a wrong emotion or an argument, or whatever. Just lots and lots of laughter.

Here we go… look for the story in between the photos.

Above: the first photo at the top of the page was made at Casa Battló. More about this marvellous place later. It was taken by a camera on the balcony at the front of the house, being operated from the inside. Cost a fortune, but you got it digitally as well. 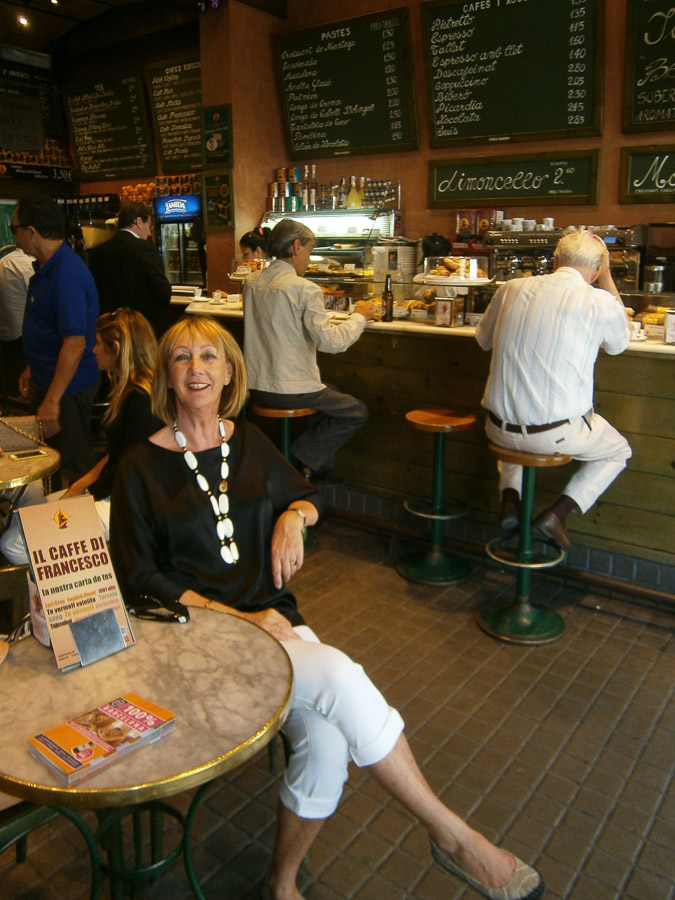 Below: here is Lia. 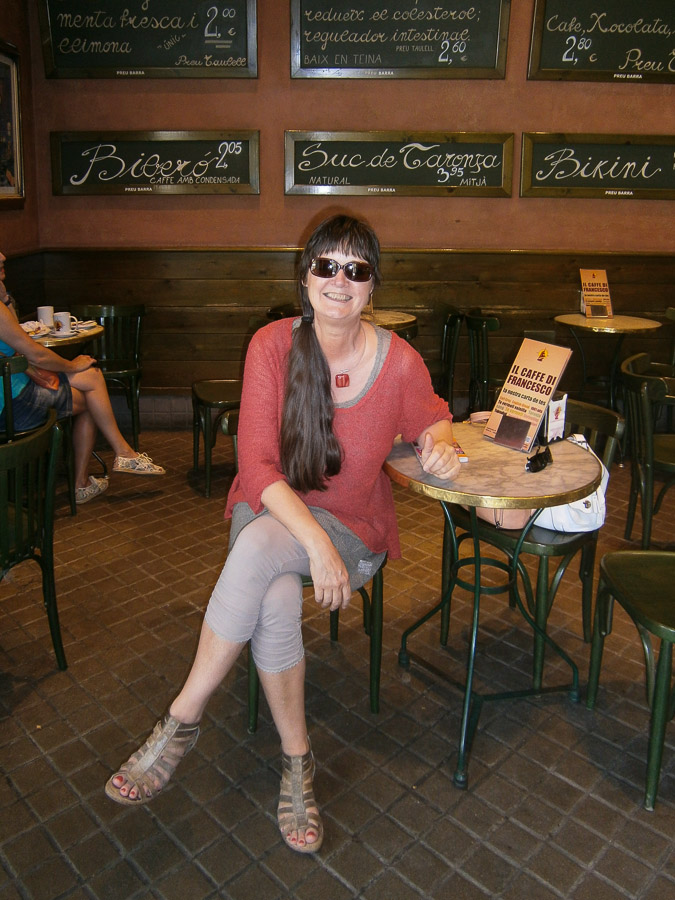 Below:  OK, mistake… I bought two hats. Judith, the Style Crone inspired me, but hats are no good for me. Just a little bit of wind and I had to grab it (or run after it). And at the end of the day, after sweating like mad underneath that hat, my hair went completely the wrong way. This black and white outfit should be worn with the trousers full length and black high heels, as seen here 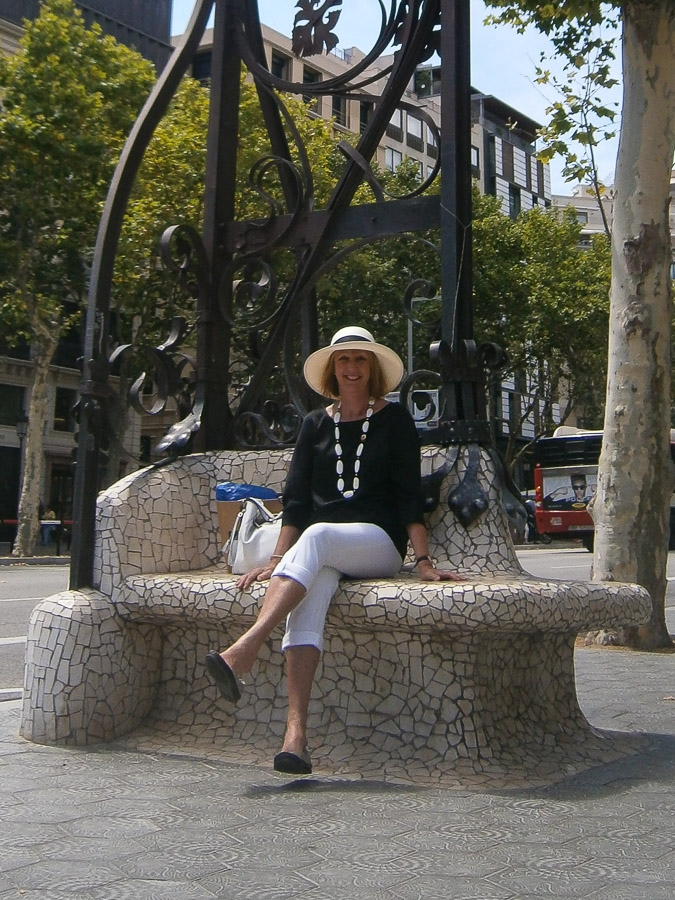 Below: Casa Battló, what can I say? Gaudi, the architect, was a genius in my eyes. Apart from the different way he styled the house, I love him for his clever thinking, like how to air the house, how to let the maids do the laundry at the top floor and dry it in the wind, without rain coming in, how to turn chimneys into art. Especially how he invented new ways to construct things. Really a genius, both technically and artistically. 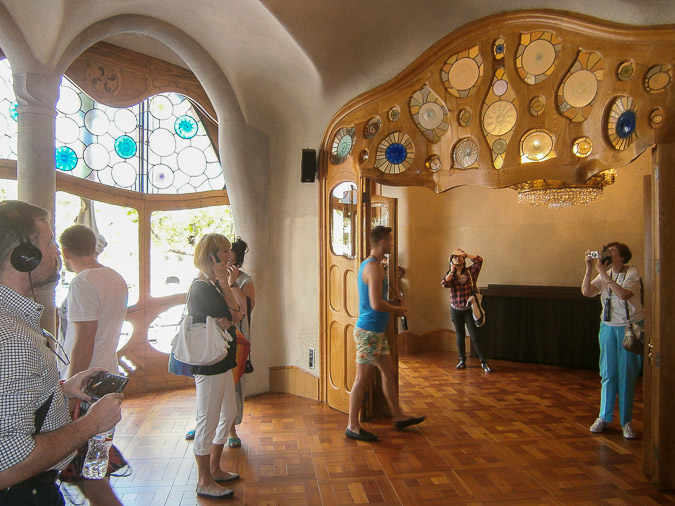 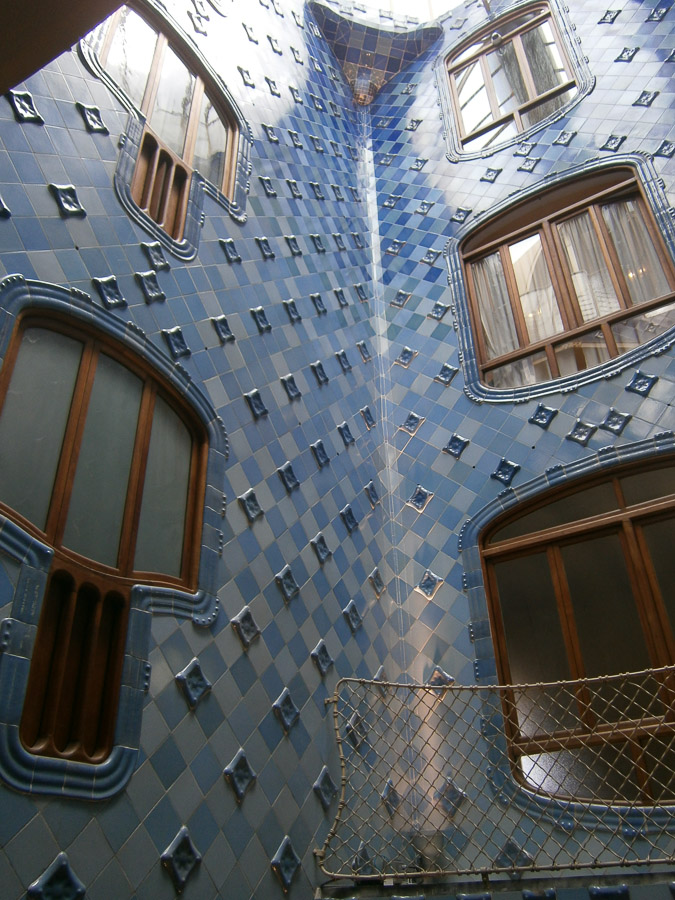 Below: grouping the chimneys and putting broken ceramic on them to protect them. That was cheap and clever as you cannot put normal tiles on these round surfaces. 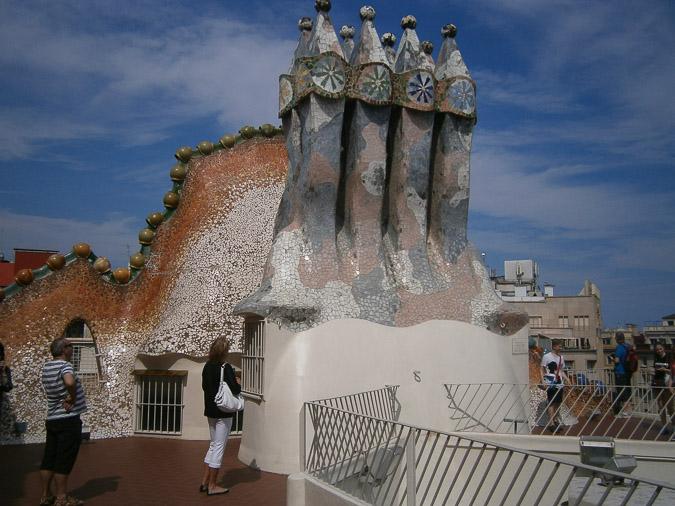 Below: on the left of the woman in pink and white, you see the top of the light shaft of two photos before. 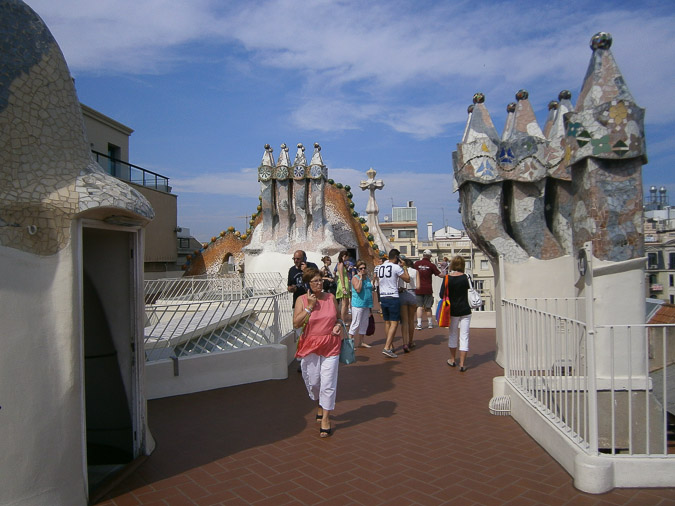 Below: onto Park Güell, another Gaudi project. Look at the construction above my head 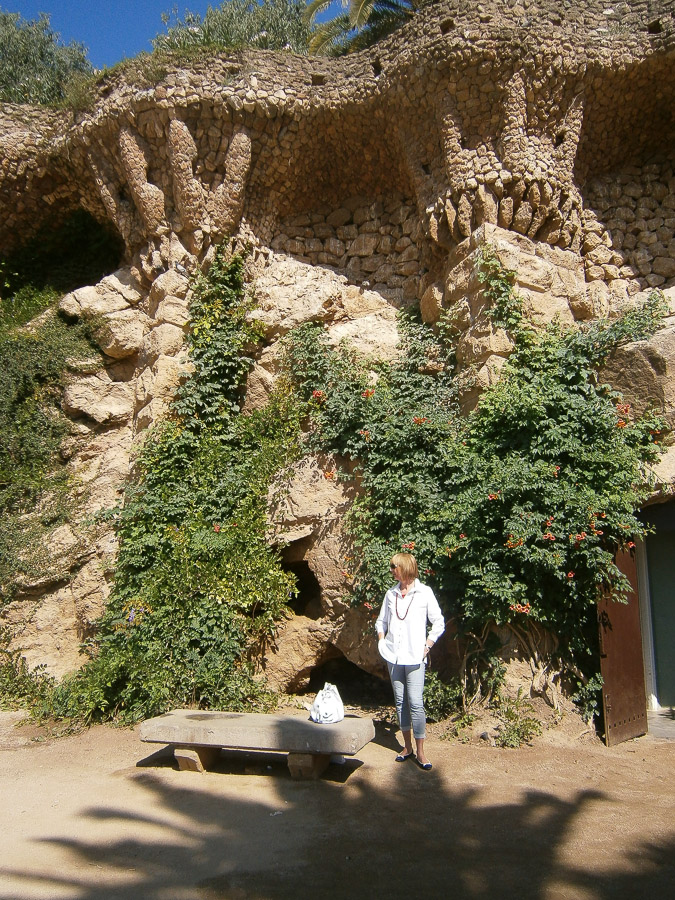 Below: wearing my blue and white striped trousers which you saw last week. This time with a white blouse, red top and red necklace and blue/white ballerinas. The trousers turned out rather moire in this photo. 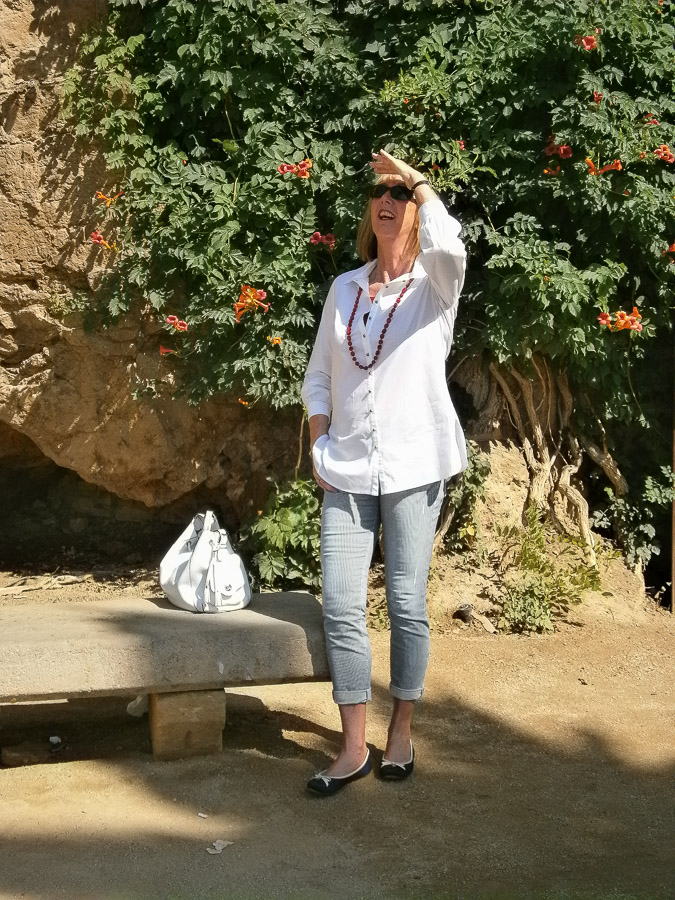 Below: part of the park, but you can see better photos if you just google. 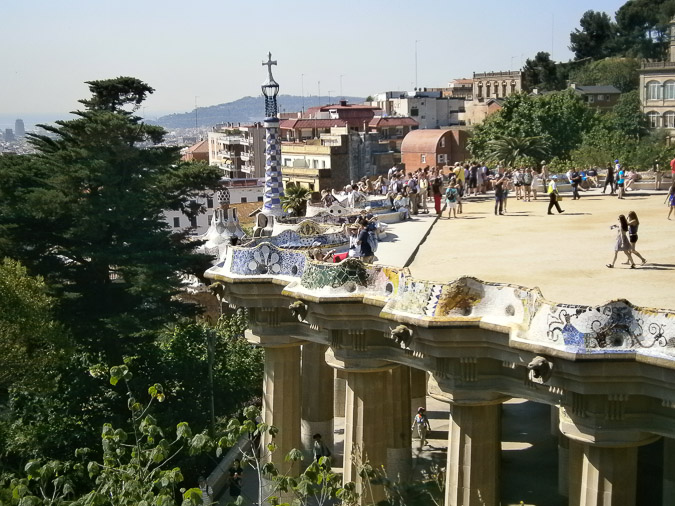 Below: the house where Gaudi lived in the Park Güell. 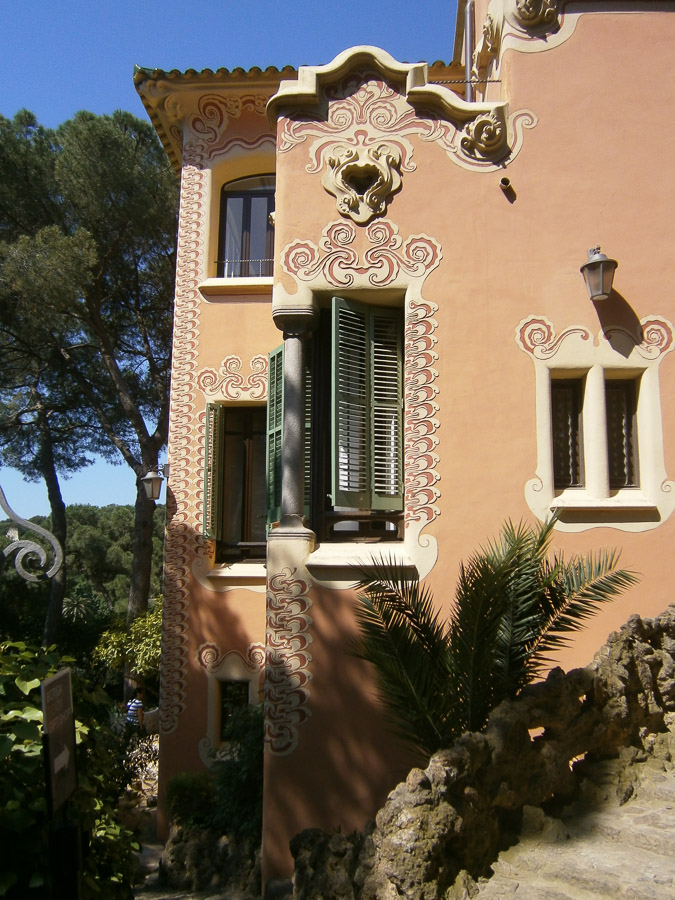 Below: Lia sitting on a bench in a 4D shop, next to a bronze statue of Gaudi. The Sacrada Familia projected in the background. 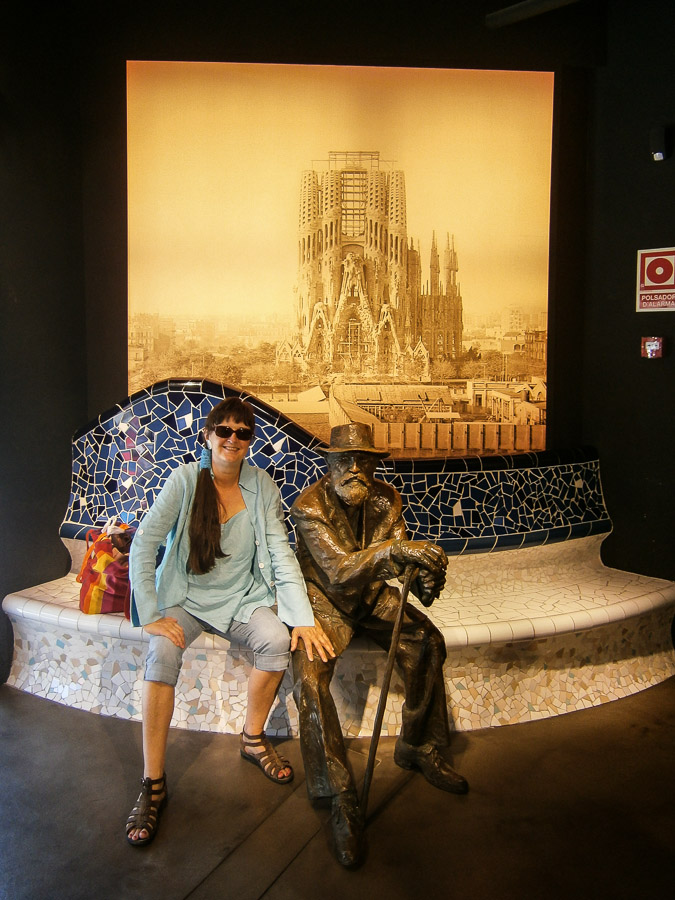 Below: third outfit: my black and white “jump”suit as you saw two weeks ago at the Amsterdam Maritime Museum. This time with flat ballerinas, red accessories and hat number two. 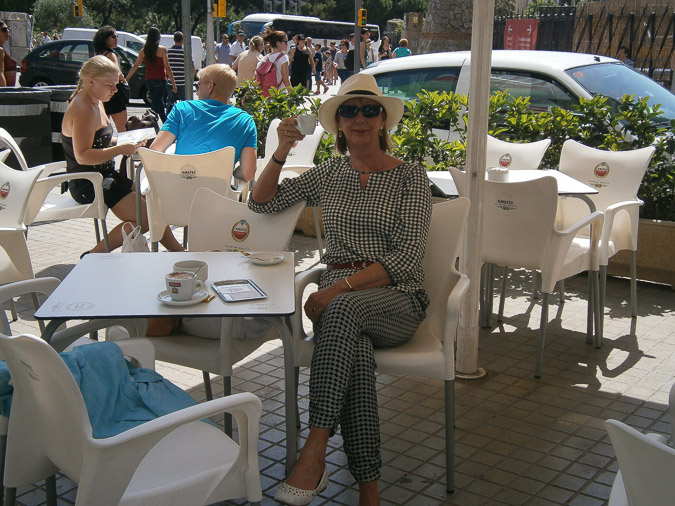 Below: with the Sacrada Familia in the background 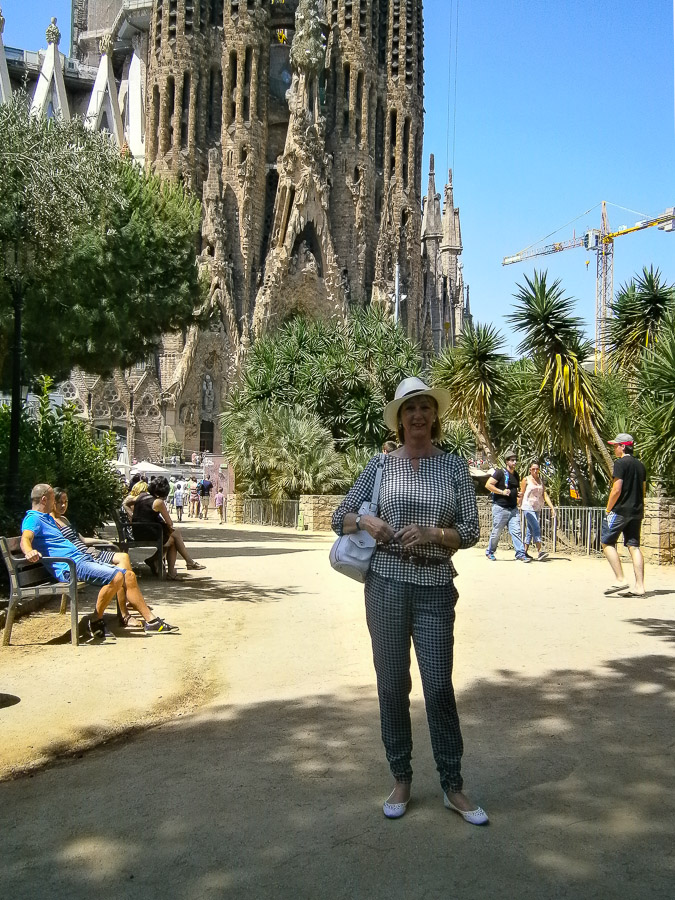 Below: and of course there was tapas… lots and lots of tapas. So nice. Ignore the face…. smiling is not always flattering. 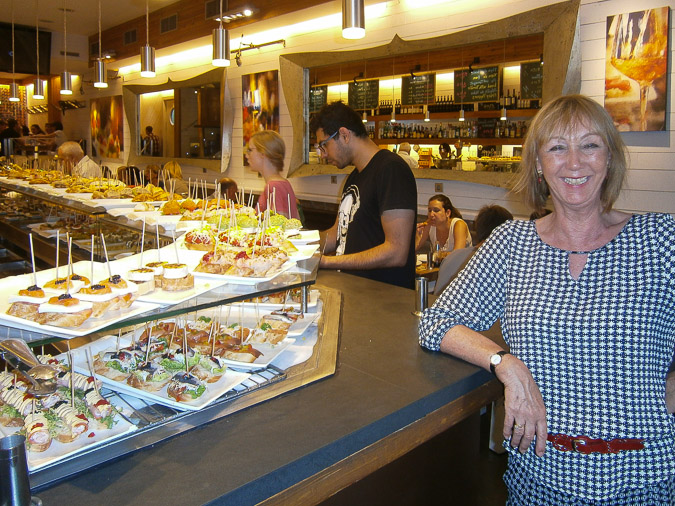 So three outfits and they were all good. Shoes were properly broken in. Most people I saw were wearing shorts. Tourists eh?

Below: as final picture a close-up of me with hat. 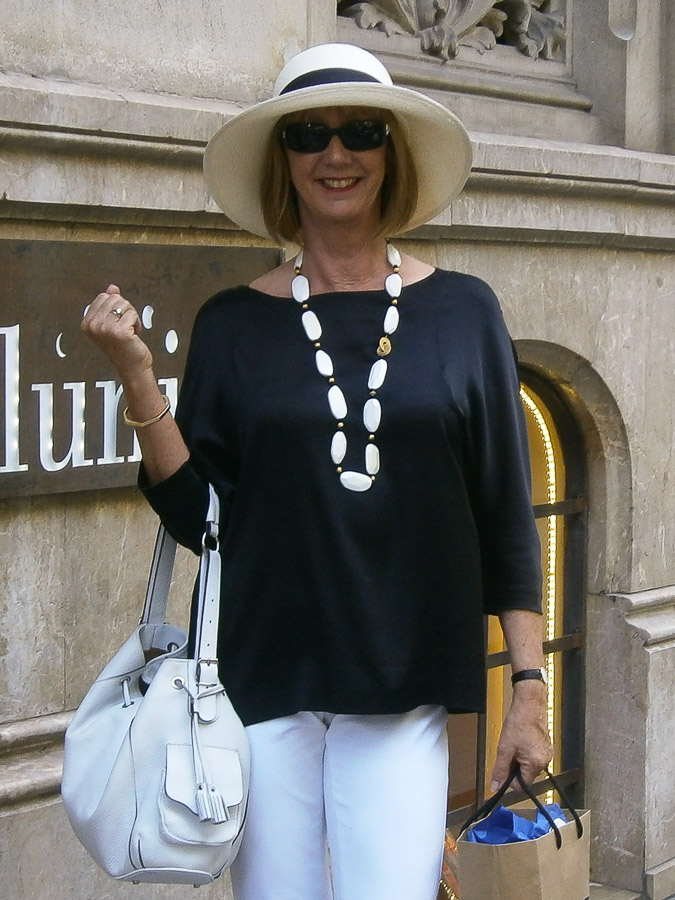