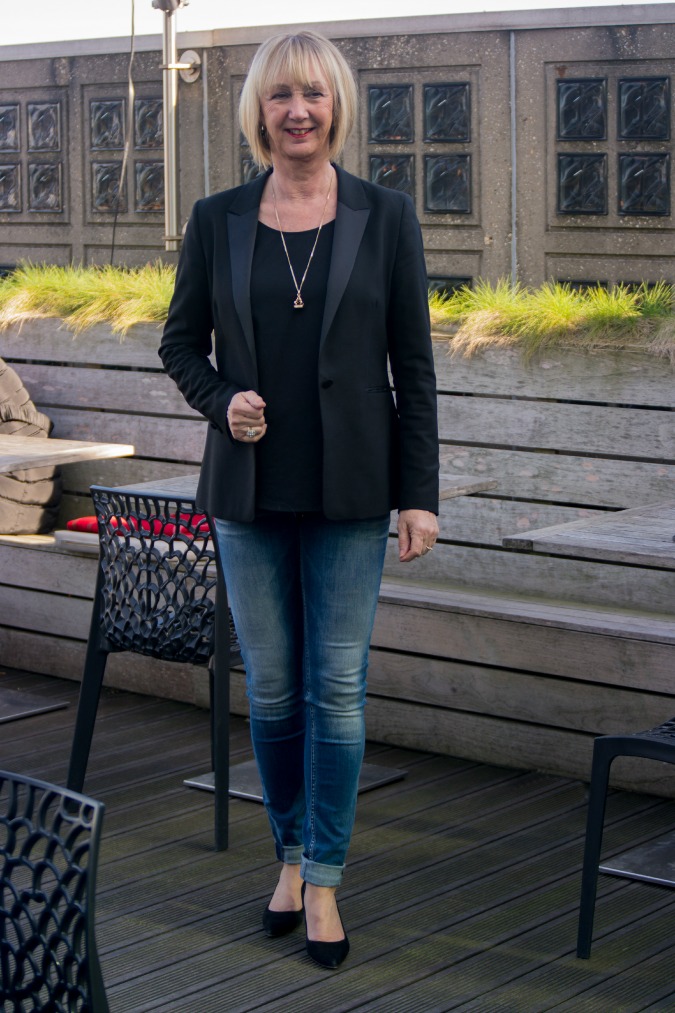 When I showed you the pictures of the IJhallen, I said I would give you a closer look at what I was wearing that day. Well, that was this black jacket (brand Reiss, present from husband Ron), a black top, my trusted skinny jeans by Denham, a gold necklace (present from Ron) and suede knee boots. But I prefer these suede pumps by Dune with this outfit. For me there is a right balance between casual and chic.

Now on to this post. Ron and I went to an Amsterdam department store called The Bijenkorf (Bee hive). It is probably the best one we have in The Netherlands.

The task of the day was to find a new trolley as the old one had broken down. Not to travel abroad with, but to take to work. You see, I schlepp around many things from one head office building to another. Like high heeled shoes, sandwiches, papers, sewing kit, glasses etc. Much easier to trolley that stuff along than carry it.

Below: here am I, carefully inspecting the selected trolley. 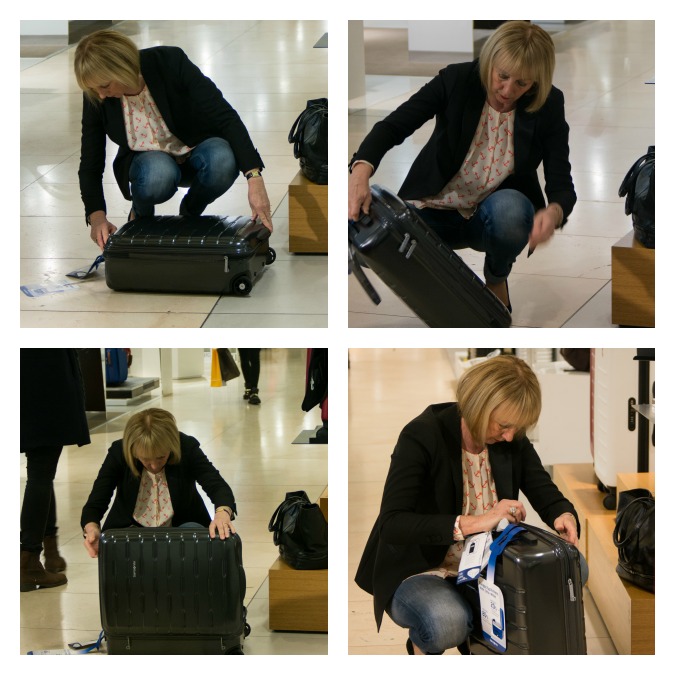 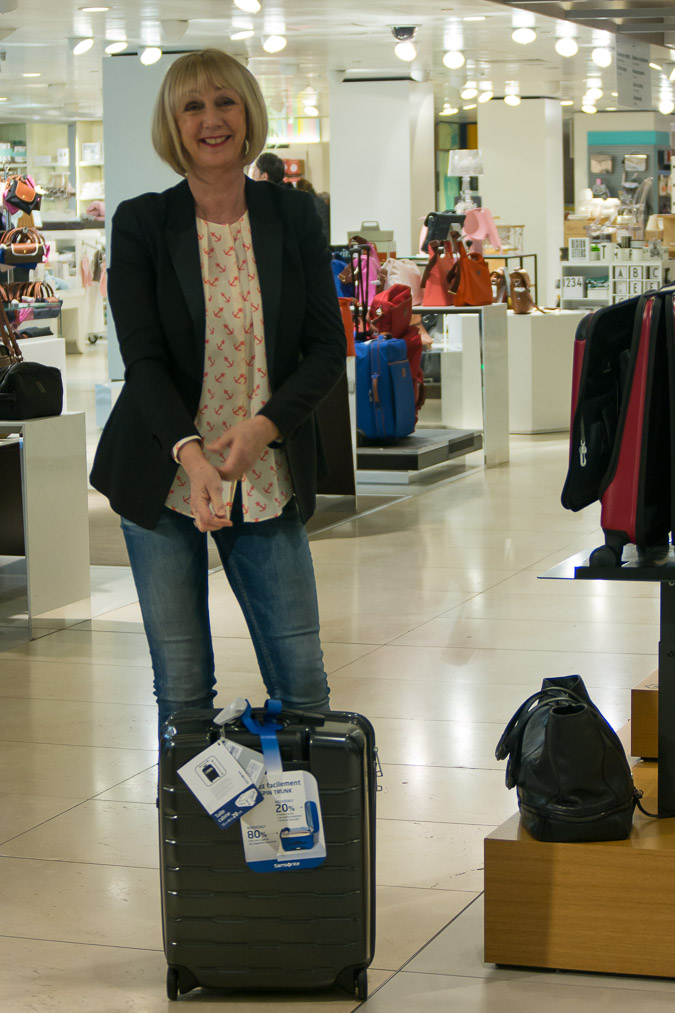 Shoes….. really it is not a big step from trolleys to shoes…. not in a department store. Below:  checking the price. I am actually looking for marine pumps and the ones I am holding are black. But as I am slipping out of the black ones I am wearing, it might be good to replace them. 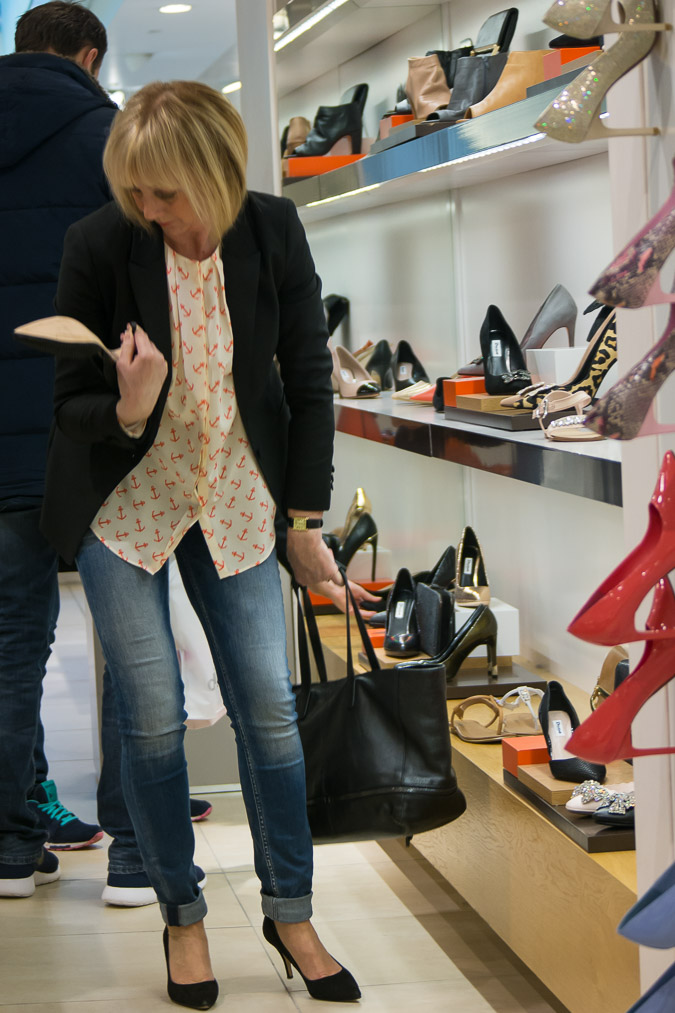 Below: checking the height of the heel with the ones I am wearing. 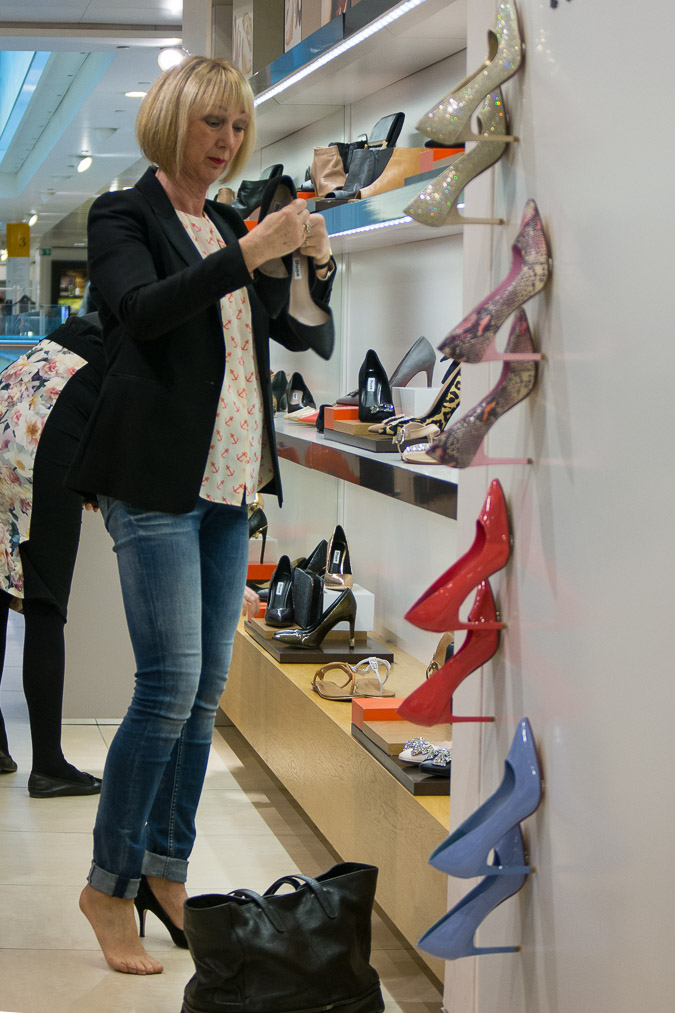 Below: request from Ron: “Could you please stop pointing your butt to the camera all the time?” 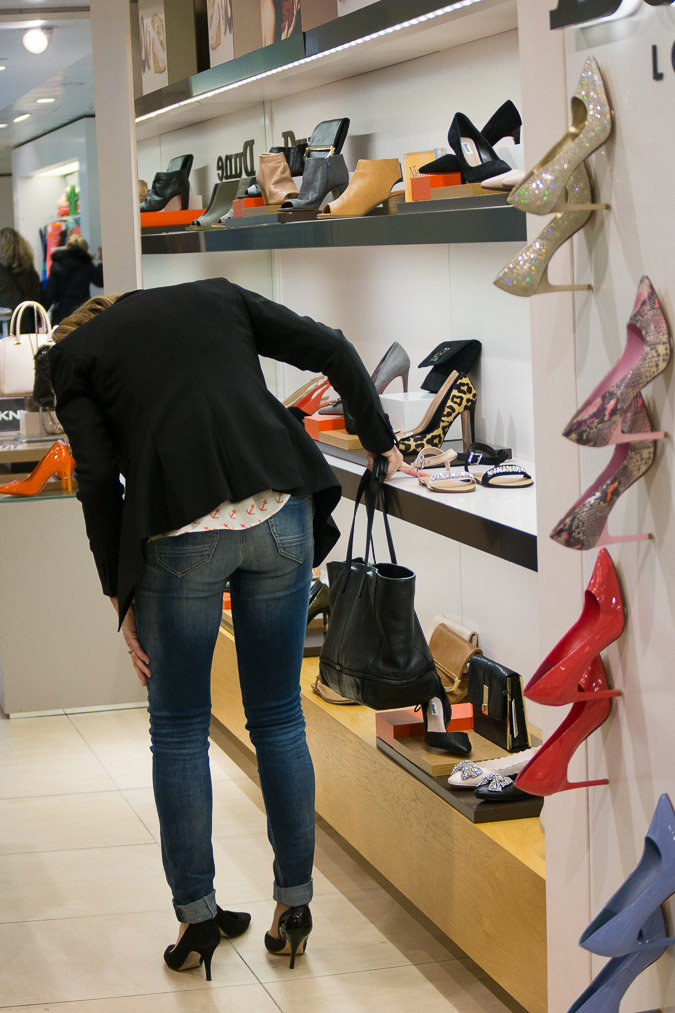 Below: they are very comfortable. 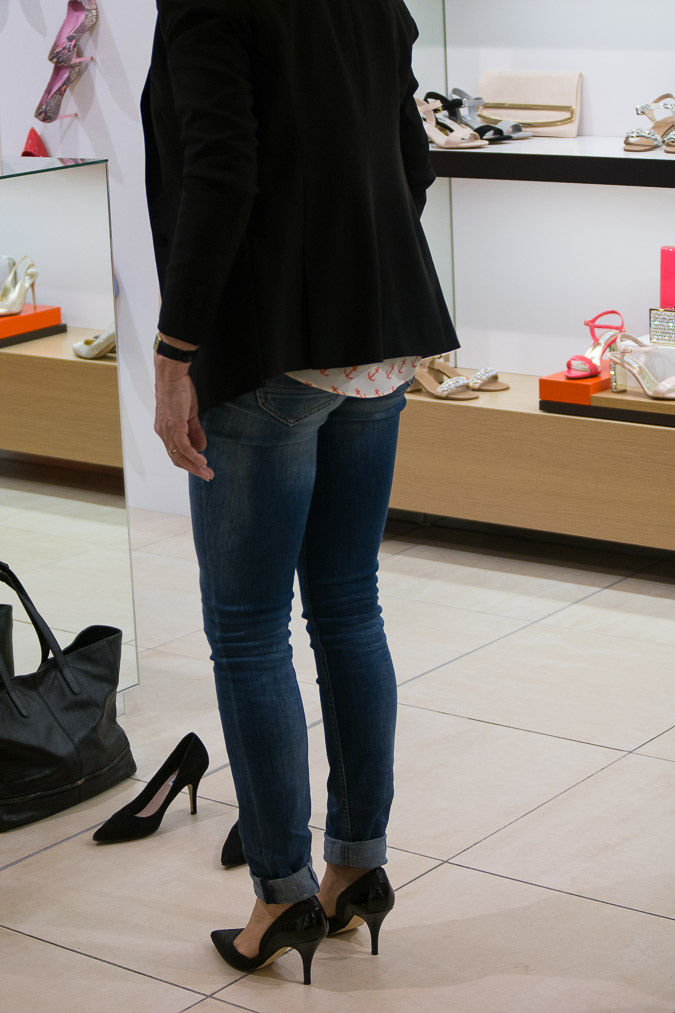 Below: can you see how concentrated I am on these kind of jobs? The anchor blouse I am wearing is by Marlene Birger and you have seen it before in this post and this one. 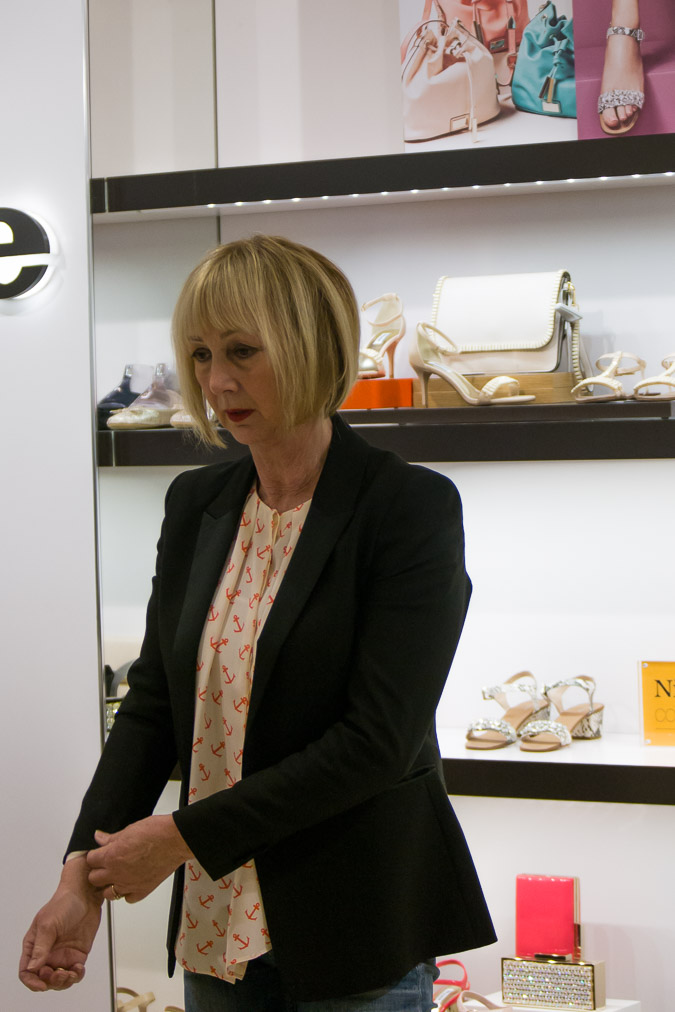 Below: just to show you I can still squat with heels on. Husband: “Not your butt again.” But in the meantime he was taking pictures. 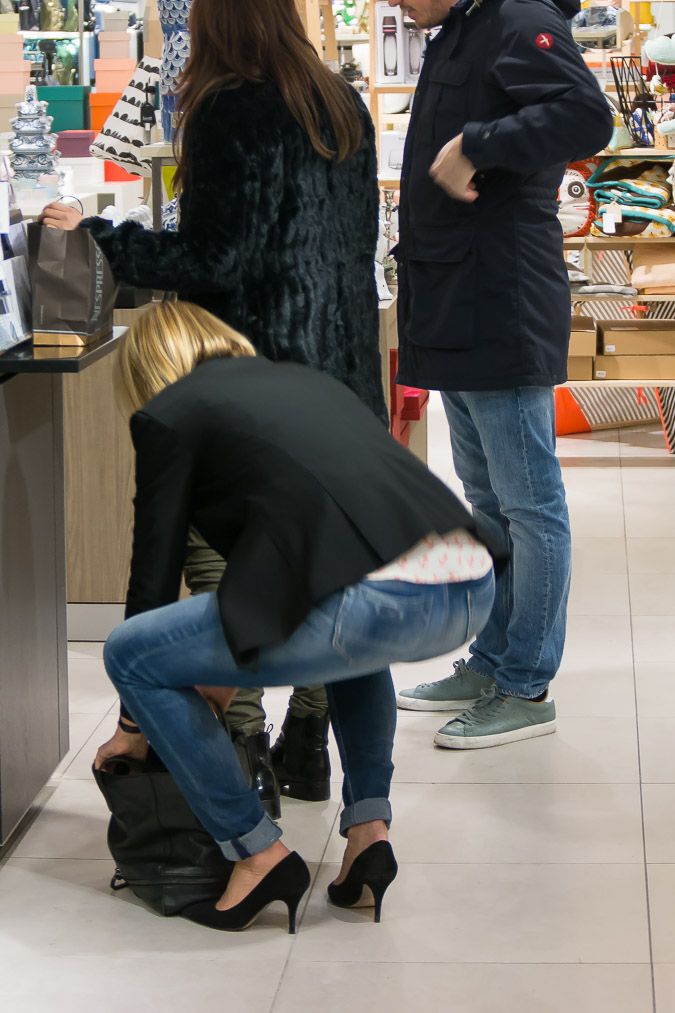 Below: the next department had this lovely red leather jacket (brand Arma). I would have bought it, but Ron didn’t like it. He thought it looked cheap (I totally disagree) and he didn’t think I would wear it a lot (he is probably right). As he is a good stylist, I listen to him. Often enough, when I am on my own, I buy clothes which he doesn’t always like. And I still keep them. When I am with him, I listen. 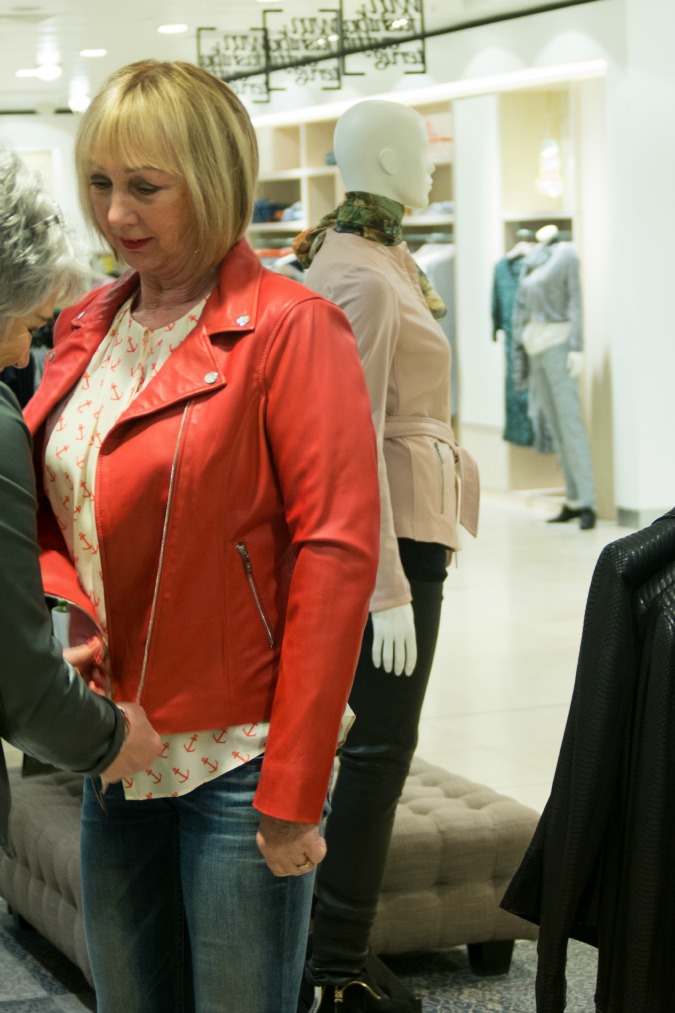 Below: this dress was not a good idea either. Although I was rather amazed by the fit on me, Ron said that the white layer underneath the black dress had a funny effect, especially around the bosom. He was right again. (Not a flattering angle….) 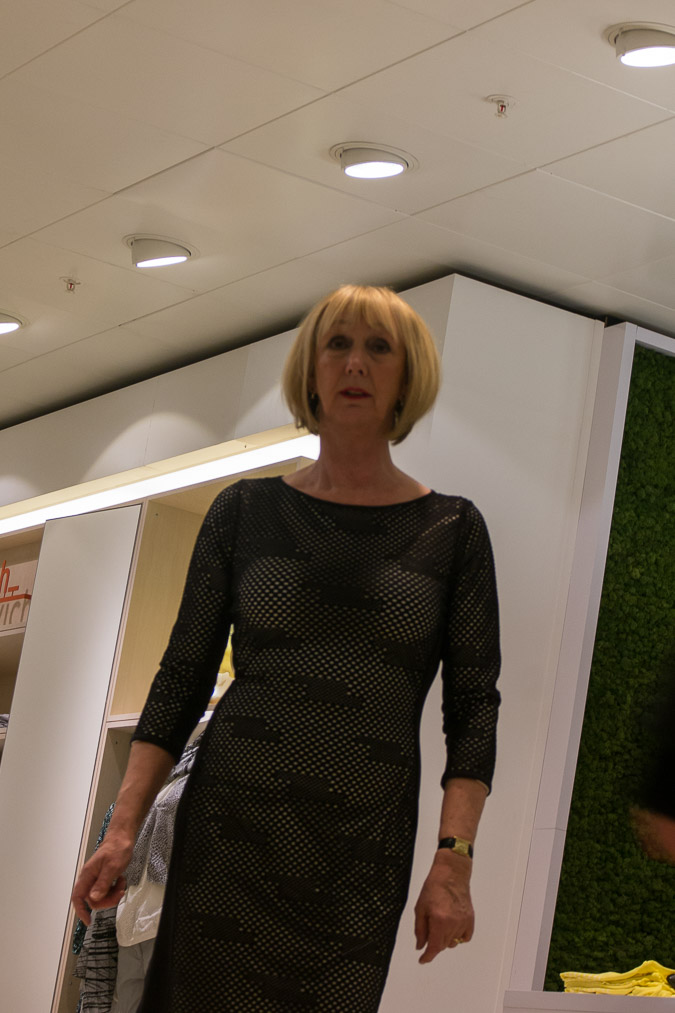 Below: Ron spotted this outfit (brand Claudia Sträter) and it made me very enthousiastic. But he said the yellow was too overwhelming. After seeing this photo I agreed.

It wasn’t easy taking pictures. An older sales lady of Claudia Sträter told Ron to stop taking pictures, in quite an unpleasant tone. When we asked for a reason, she didn’t give one. Just formed a straight line with her lips and repeated: no photos. Which we thought was ludicrous. I asked Ron to continue, but less conspicuously. So the sales lady called security, who told Ron to stop photographing. Again, no other explanation than: “we had a complaint from the staff”. This was a very explosive situation as my man is not taking these things lying down. A nasty discussion took place. AND I HATE PUBLIC SCENES. I will never start one. Hate them. Fortunately I was able to put out “the fire” before it totally blew up. But I do think the sales lady could have been a lot more client friendly. Another tone of voice would probably have done the trick, explanation or no explanation. Everybody wants to be treated with respect and we are no exception. 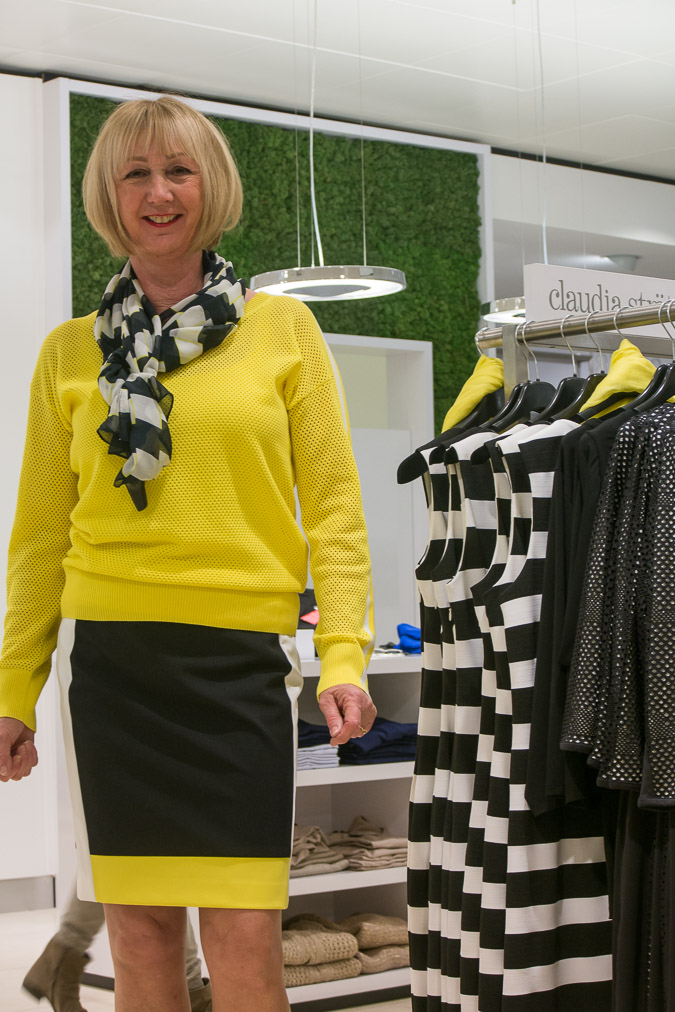 Below: nearby we found the brand Expresso, which is also part of the Claudia Sträter Group. Ron liked this cardigan. (My hair was slowly turning into a mess.) 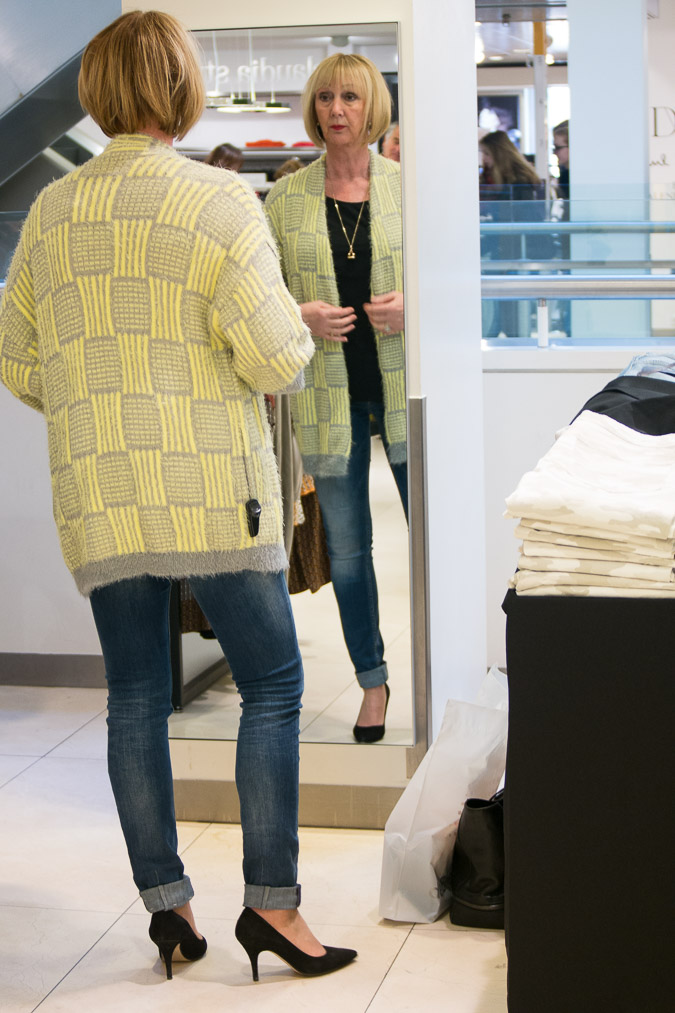 Below: I already liked it with a black top, but went all the way with a matching tanktop, jumper and scarf. 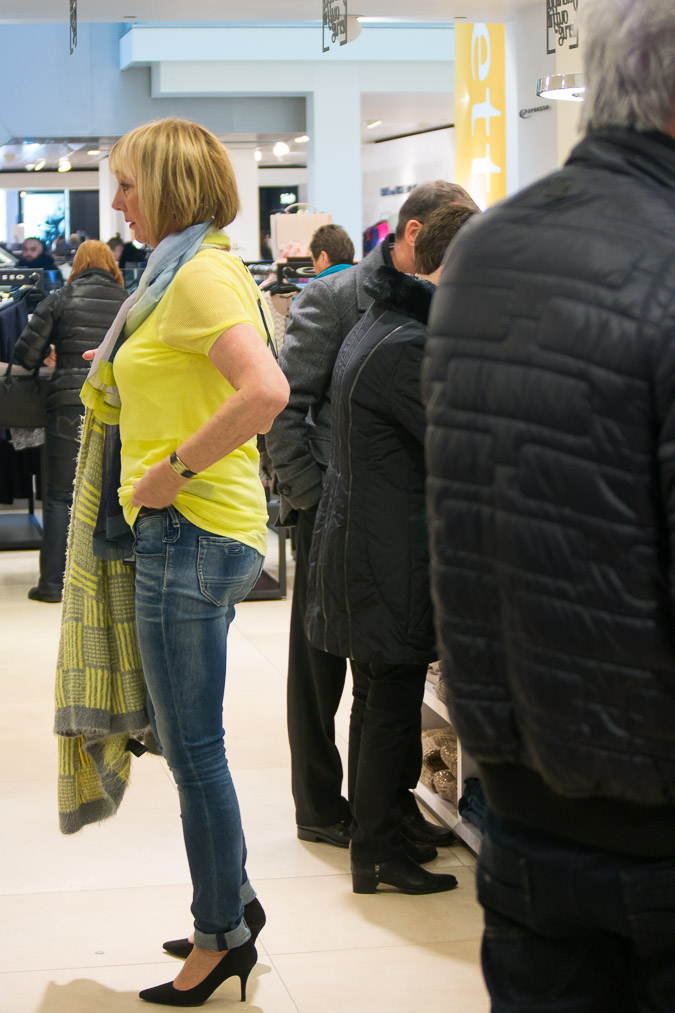 Below: end result. Puling, what I call, my “potato face”. 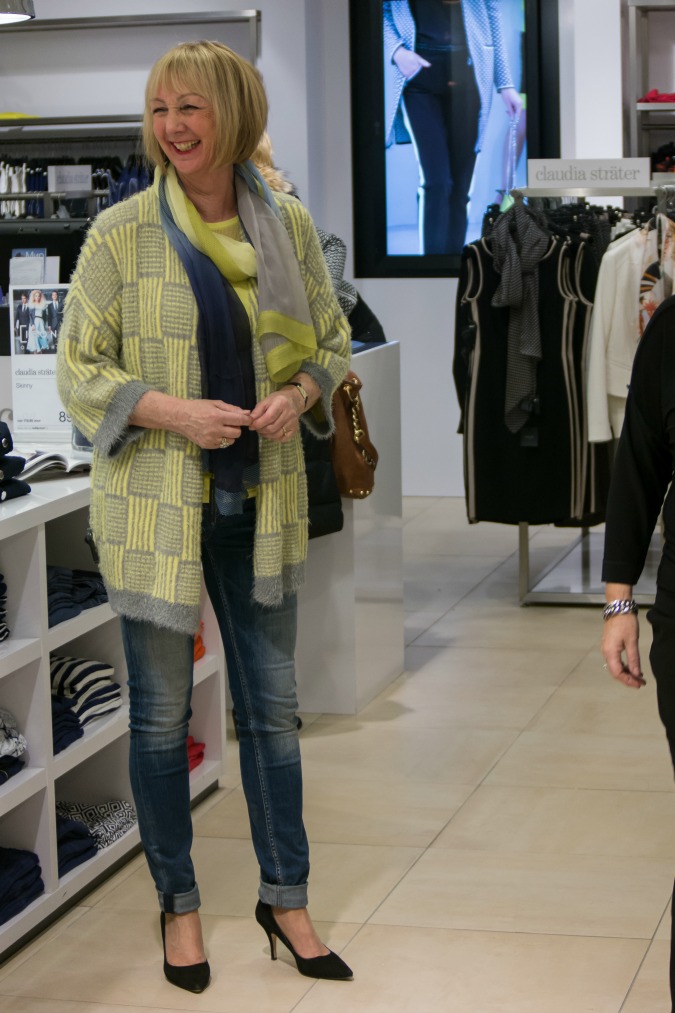 Below: the sales lady of Expresso saved the afternoon. She made up for the rude behaviour of the Claudia Sträter sales lady. 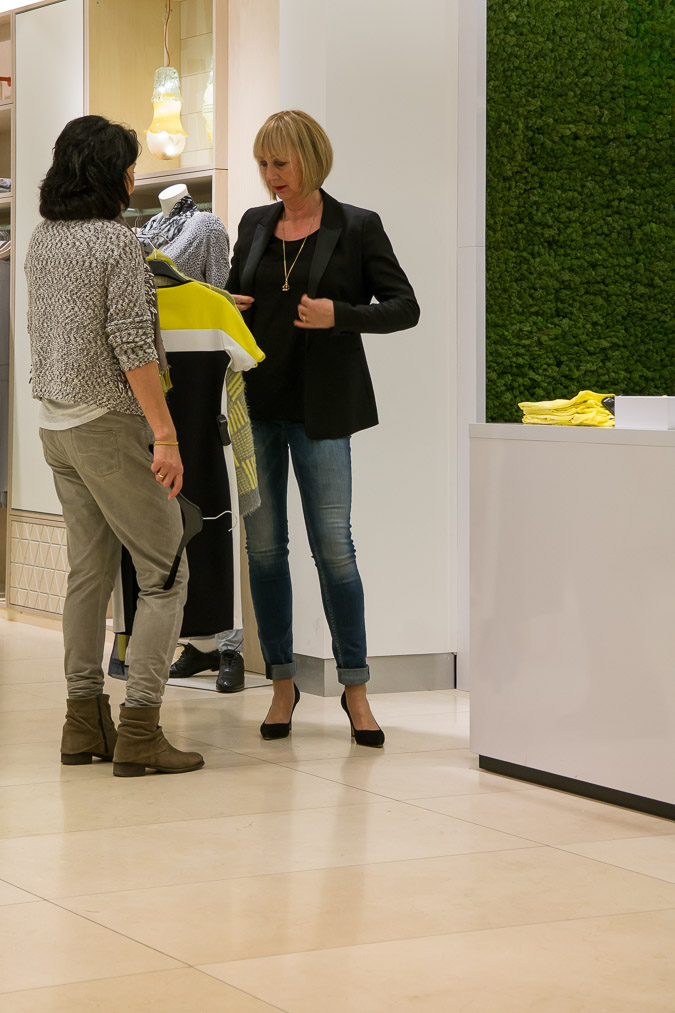 Do you have any idea why you would not be allowed to take photographs in a department store? Are they afraid you will copy the collection? Or photograph people who do not want to be photographed? We did ask the service department afterwards whether it was forbidden to take photos as we never saw a sign telling so. They said it wasn’t forbidden but please don’t photograph other clients. And if the security guard would make another fuss, to send him to them (as if he would do so haha).