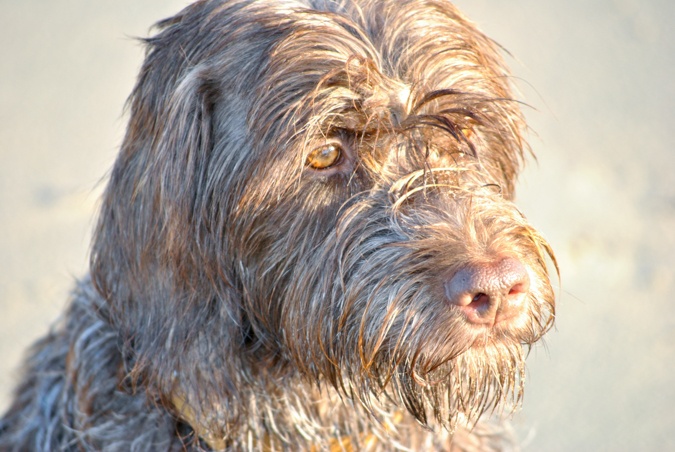 Yes, this is a fashion blog, or rather a blog about outfits. But it has also evolved into a personal blog about my life. Which is why this week there will be no outfits (you cannot count the big coat I am wearing) as our dog Charlie is no longer with us. We had to put her to sleep at the age of 12 as she was very ill (cancer everywhere) and we didn’t want to wait until she suffered. Which is difficult to see with this breed anyway. When Charlie’s mother showed signs there was something wrong with her, she died the next day. The breeder told us that post-mortem revealed she was in a terrible state but had never let on. We were not going to risk that with our dog.

Over to happier days. This is her happy life story.

Below: A couple of weeks old, still at the breeder. Who can resist this? She wasn’t housebroken yet, hence the wet spot beside her. 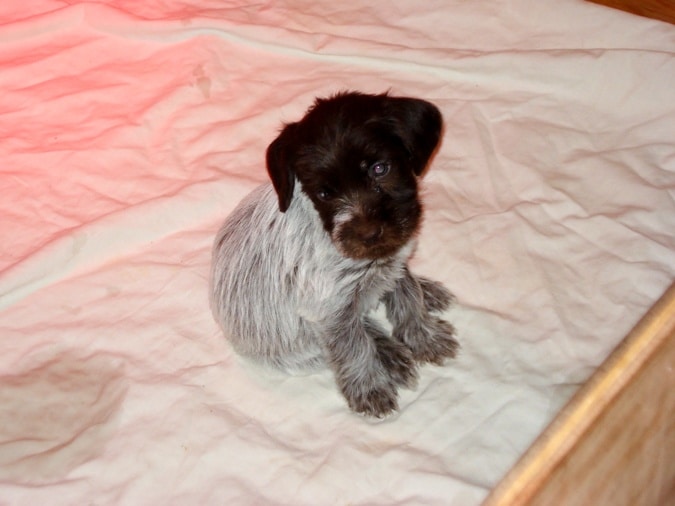 Below: Call me nuts, but the first thing that went through my brain when I saw the look on Ron’s face when he held the dog for the first time, was: “OH MY GOD, how is he going to cope when she dies?” He was sooo in love with her. He even brought a little Santa Claus with him on his first visit. It was nearly Christmas and he wanted to make Christmas cards from a photo of Charlie wearing a Santa hat. And he loathed such cards. We call that a 180 degree turn. 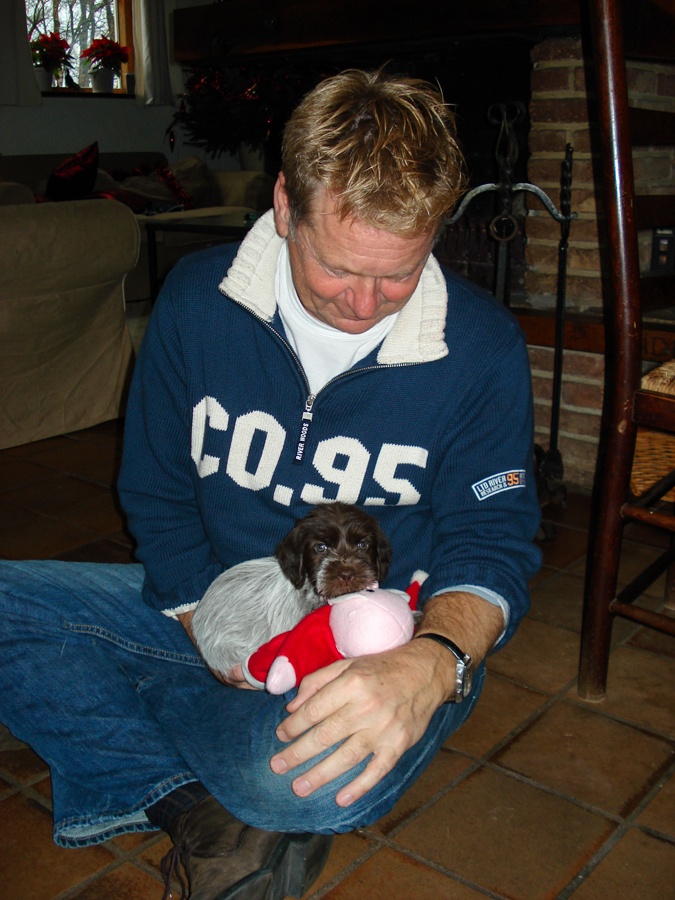 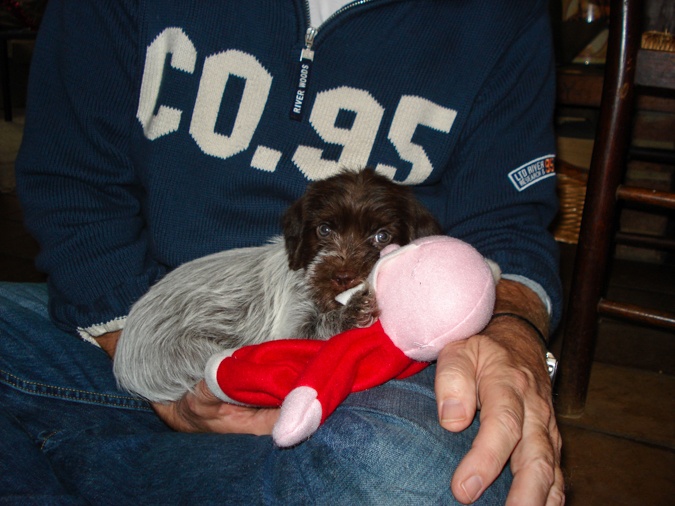 Below: Me with short dark hair and red nails, holding Charlie’s sister. A little bit of outfit talk: this means I have had that coat for at least 12 years now. It is my best coat. 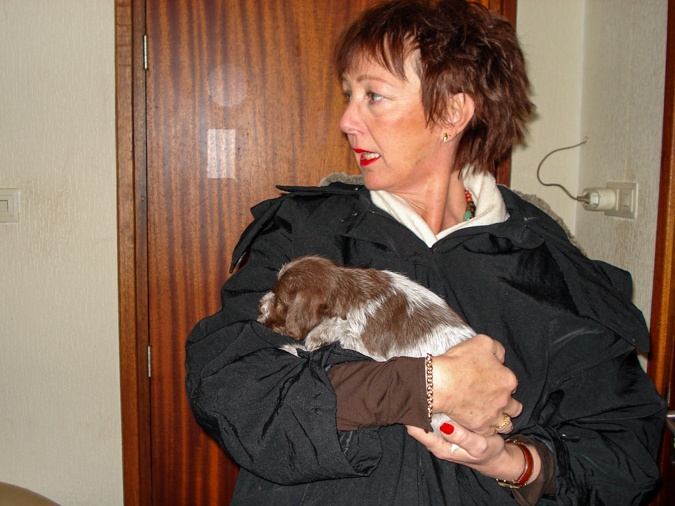 Below: She totally reciprocated his love. They were inseparable all her life. Where Ron was, the dog was. Ron used to refuse work assignments if he couldn’t take her with him. I think the hardest thing Charlie ever experienced in her entire life, was waiting at home alone for 5 hours. This sometimes happened, but really, not very often. 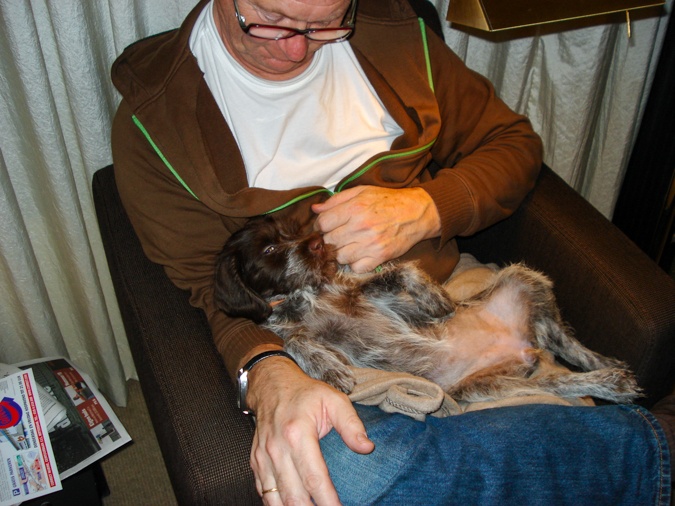 Below: At the time Charlie came to stay with us, we had neighbours whose puppy lost one leg, while playing rough games on the parquet floor. We had a parquet floor as well. We took action and had cheap carpet put in over the parquet floor so it couldn’t happen to our dog. Pity she wasn’t housebroken…. Half a year later when her legs were firm, we took away the carpet and found many big black spots on the wooden floor from the little wee-wees that had gong right through the carpet, having the same effect as acid. Never mind, we hired somebody to sand and polish the floor and that was that. 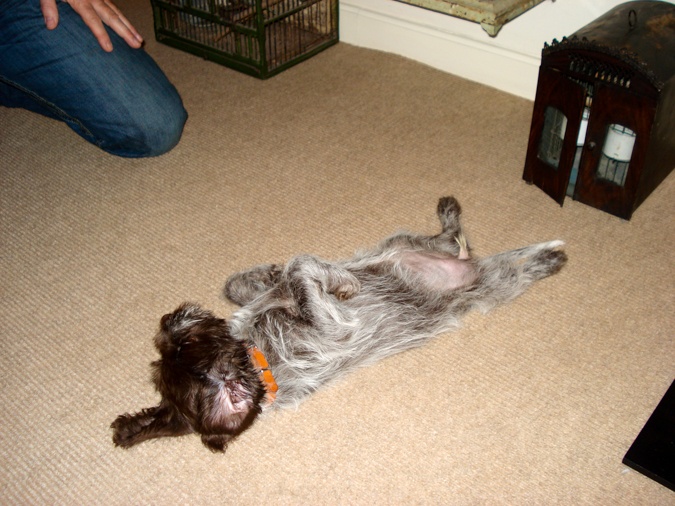 Below: She loved “fighting” with the broom. 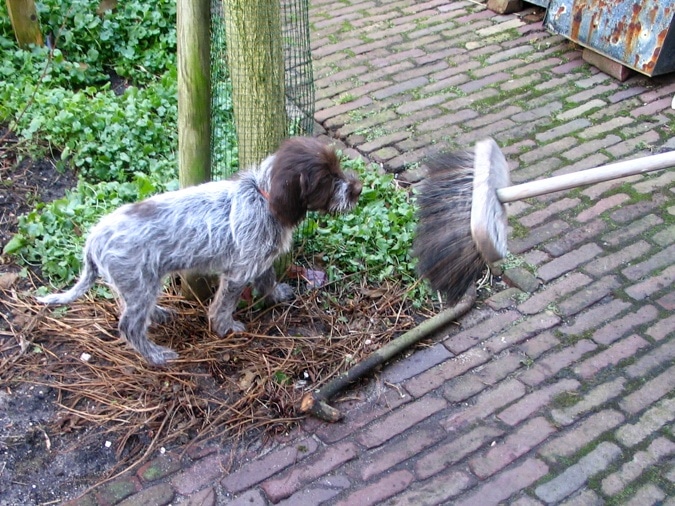 Below: Weird looking dog. “Look… I can fly, I am like Dumbo”. 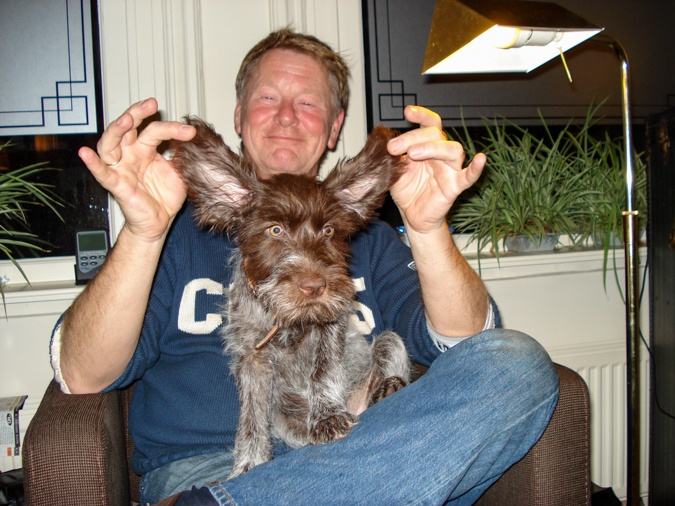 Below: Pedigree dogs are to be examined when they are a year. Hmm… she didn’t cut it as her back wasn’t straight. There was a little dent in it. Perhaps that is what you get when you are the runt of the litter? As she was, which is why she was much smaller than she ought to be. But she was a fighter and according to the breeder, she had a sense of humour, perfect for Ron. The breeder was right. 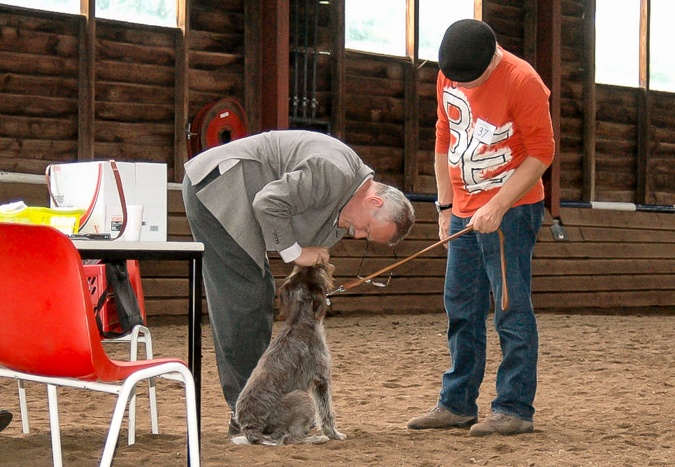 Below: Does Ron look as if he cares that her back isn’t straight? Nah.. he couldn’t care less. This is my favourite picture of the two of them. 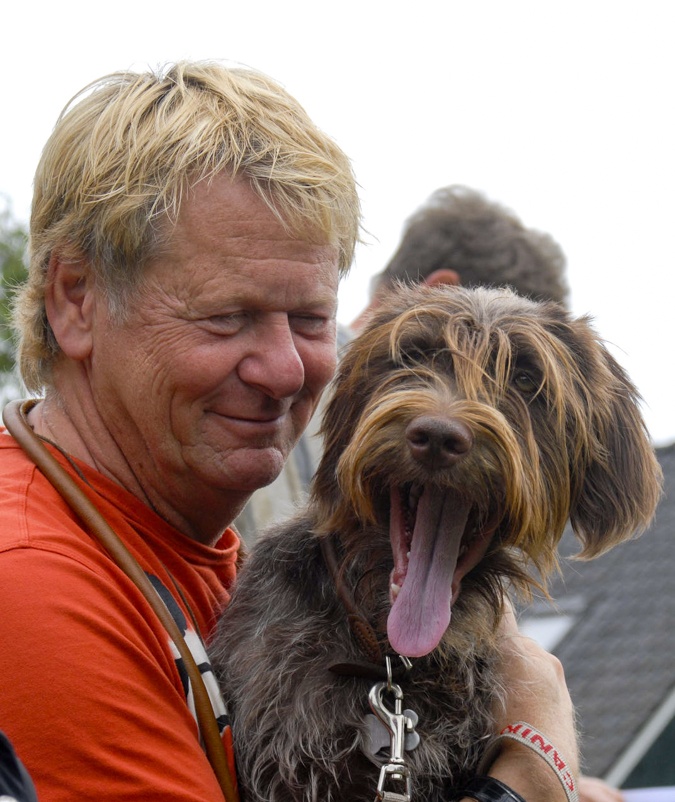 Below: Ron wouldn’t be Ron if he didn’t do things properly: dog training. Not for 2 months or 2 years. No, for 5 years. It has to be said that both Charlie and Ron enjoyed the little weekly gathering of this group enormously. They laughed so much and Charlie became the most obedient dog you could think of. Which is very helpful if you wanted her to stay or not eat the wrong things or to sit nice and still underneath your table in a restaurant (yes, that is allowed in a lot of restaurants here). 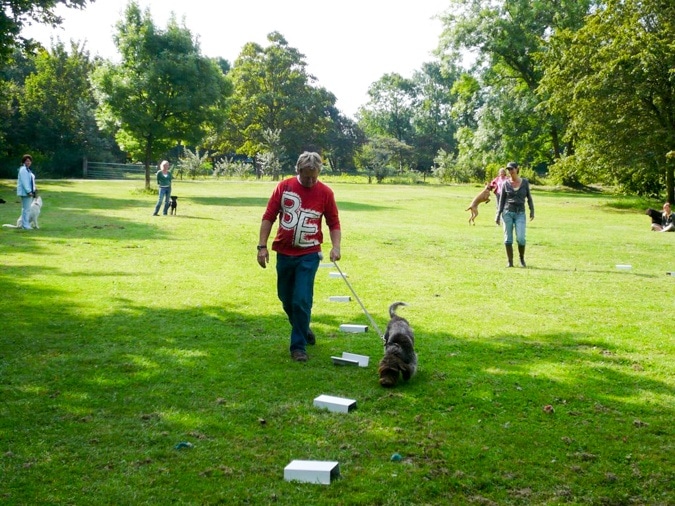 Below: She adored the beach and we are only 10 minutes by car away from it. Very convenient. Lots of forests, parks etc around here as well. Ron picked a different spot for each outing (two or three times a day), otherwise Charlie would have gotten bored. 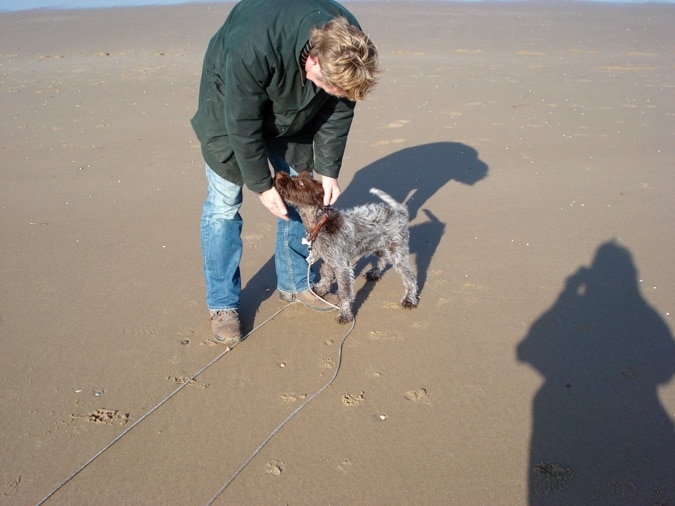 Below: Her breed is called Korthals Griffon and they are hunting dogs. Reality or play, when you threw something away which she had sniffed and say “search”, she started running in big zig-zag movements until the wind is favourable and she could smell it. 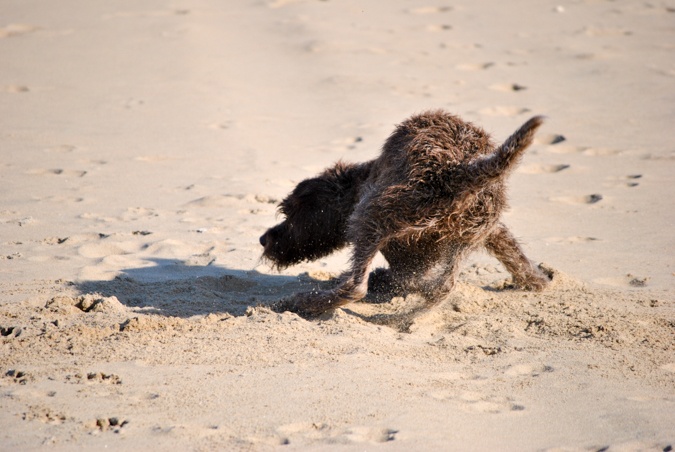 Below: Necessity to cool off in the water. Not going in too far though. She wasn’t that keen on swimming. Water yes, diving no. Which is strange as this breed is supposed to take to water like a fish. 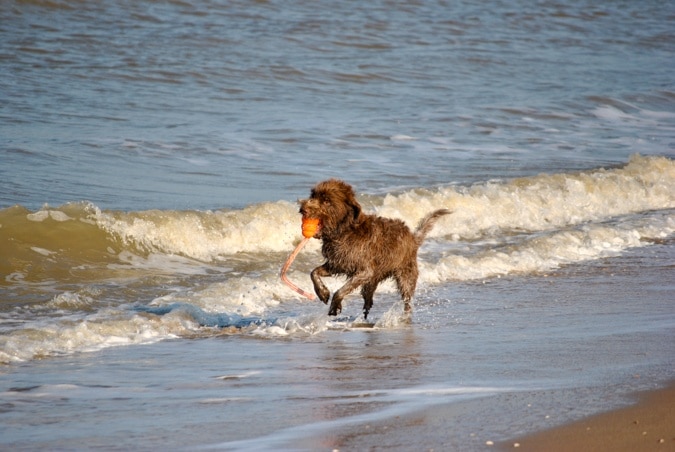 Below: As I said she is a hunting dog. And boy oh boy, did she like chasing hares and rabbits. At such speed. Even when she turned blind halfway through her life, she still chased and ran. Ron carefully selected fields for her where she couldn’t run into things. She adapted amazingly to her blindness. Most of the times you wouldn’t know she was. 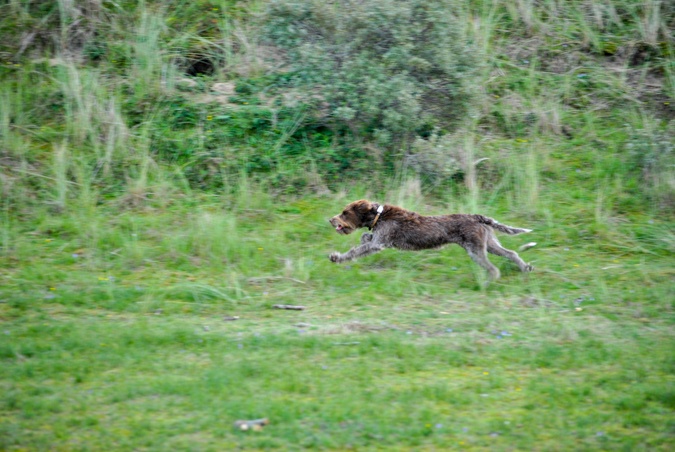 Below: Pffff…. cooling off again. 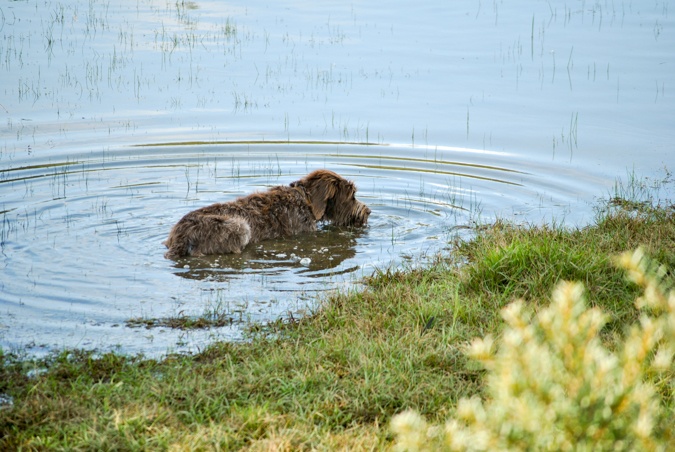 Below: Come rain or shine .. or snow, Charlie loved it all. I was her favourite sucker to hold something she could then try and take away from me. As soon as I let go and she got it, she would come back and the game had to be played again. Of course I was careful with her teeth. In this picture she has got her teeth in an old sock with stuffing. 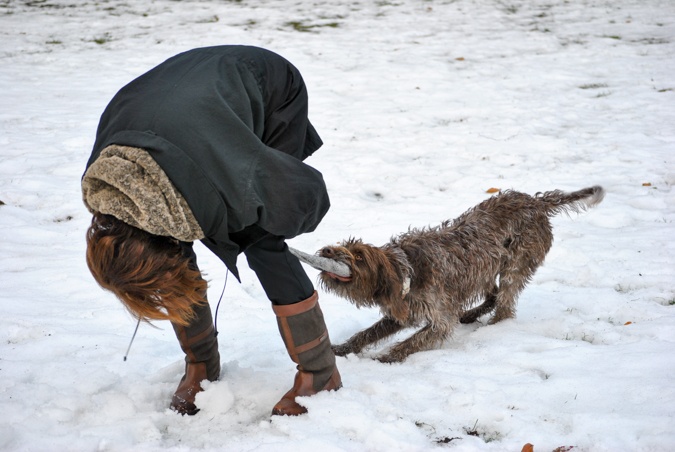 Below: There are mice and such underneath trees. Which means digging for a dog. 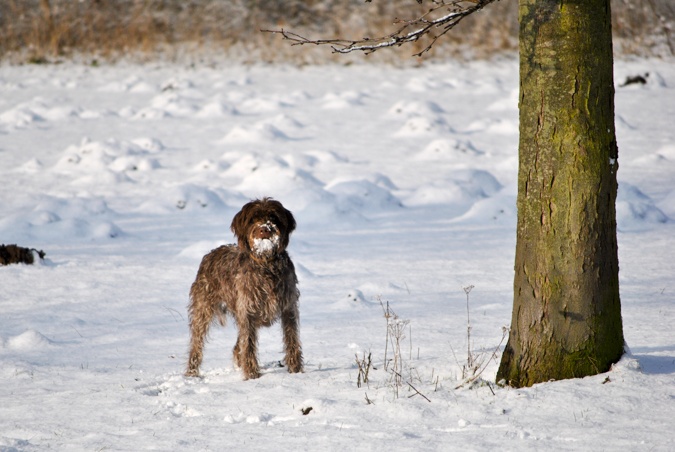 Below: You might already have seen this little video, but I added it again as I think it so represents the spirit of Charlie.

Below: Charlie on her last day out with Ron, covered in mud. 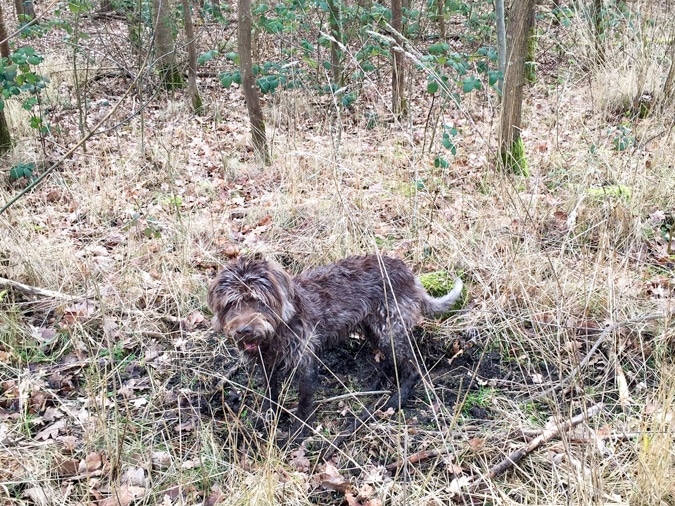 Below: It will take time for our tears not to run anymore. We miss her dreadfully but for her it was better this way. She had a very happy life with a peaceful ending. 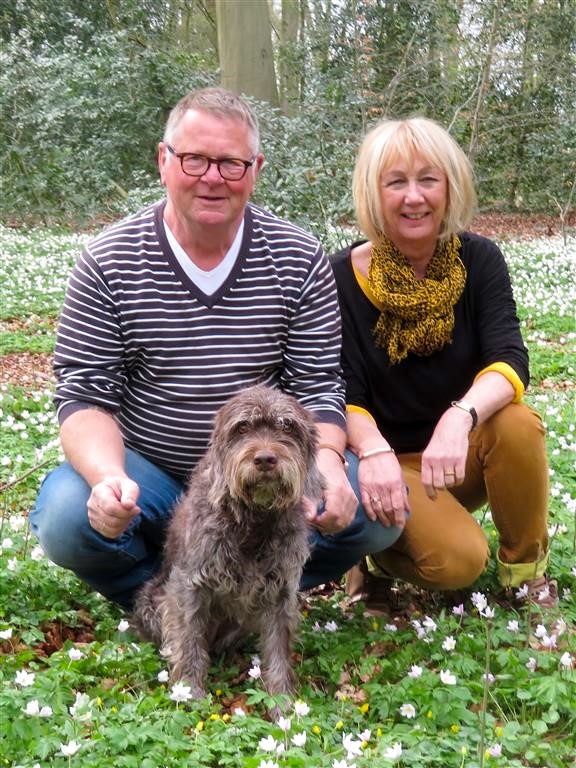 Next week will be about outfits again. I know you’ll understand the necessity of this post. It works therapeutically.

We received many cards, messages and comforting words from friends and neighbours. And indeed that is really comforting. Today our friend and neighbour Froukje brought us this little portrait of Charlie she made. So sweet and such likeness. 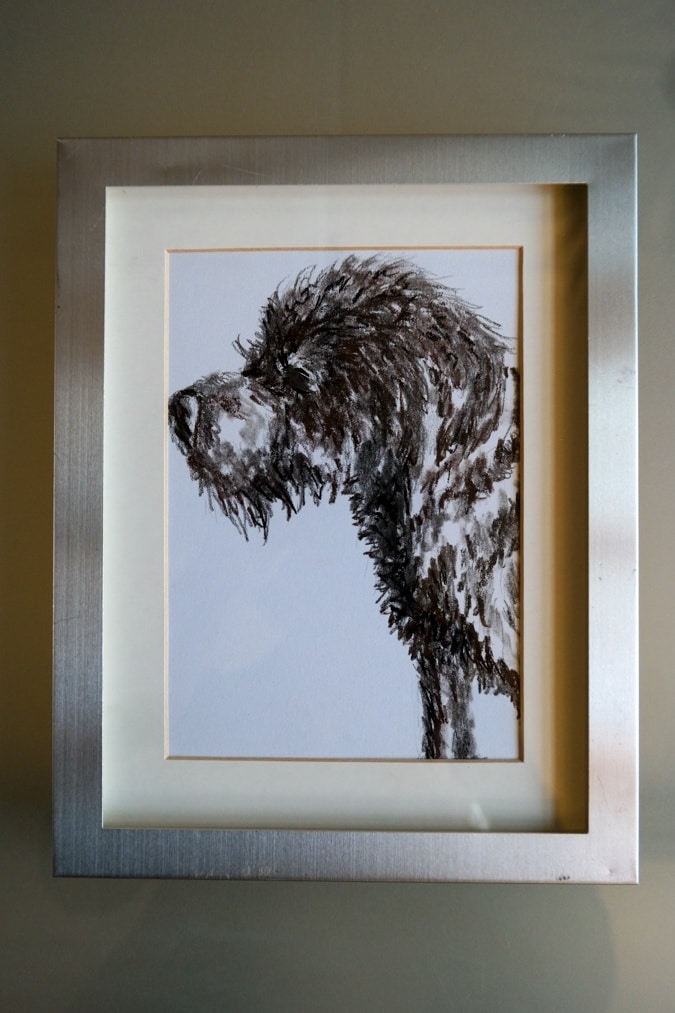 I will not reply to your comments because I can only say the same things and I already said most of them in this post. Please don’t regard it as rude. It is merely a defense mechanism against grief.