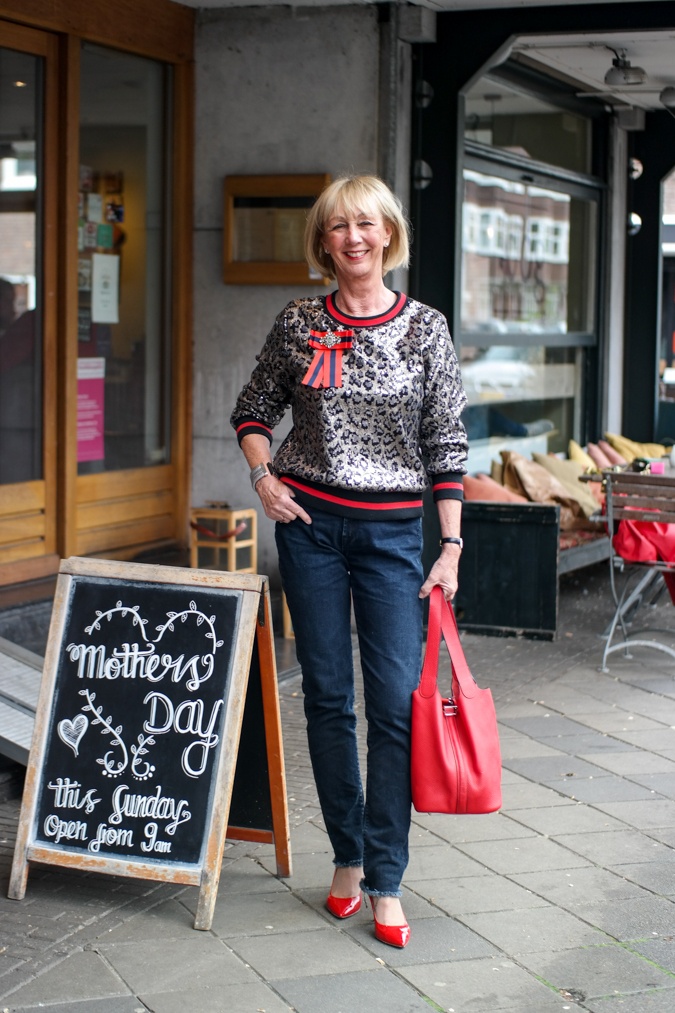 The “team” of Shopping Saturday: Anke, Sabine and I, got together for a Wednesday lunch as we all had no time to meet on a Saturday in the near future. Talk about busy women. The fact that Anke agreed to meet for a couple of hours that Wednesday amazes me. Because 1) she has a full-time job and a demanding one as well, 2) she has a toddler, 3) they are renovating their house in a major way AND 4) she was going on holiday with her husband and daughter the next day and had to clear a lot for the builders plus do the packing. This would stress me out completely. No way I would agree to come for a quiet coffee and lunch. Sabine was busy with children, school projects, work and loads of other things as well. Super women, that’s what they are.

I decided to shop my wardrobe and came up with this sequined jumper which I bought in Paris in 2016. Although I love the colours and the sequins, I hate the shape. It is really just a bit too short for me to wear on jeans and too long to wear on skirts. Of course I chose the most flattering photos for this post, but immediately after seeing the photos, I contacted Lisa of The Sequinist, to hear whether she would like it. After all, who better to give this lovely jumper the wear it deserves than her? I will see Lisa in July. Let’s hope it fits and suits her.

Below: Here they are again, Sabine and Anke. I missed them. They are such nice women. 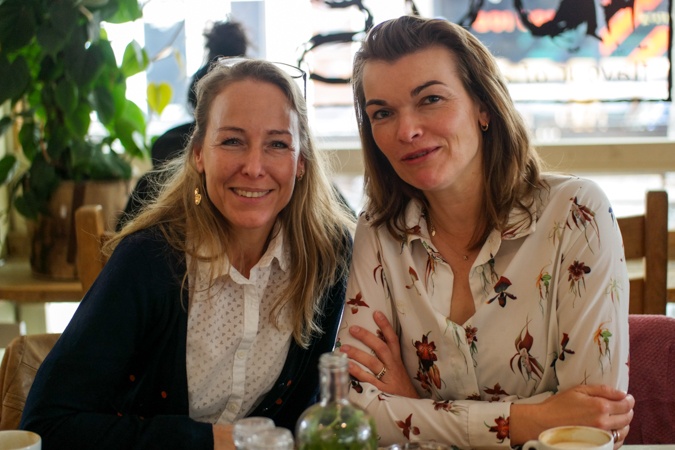 Below: After about an hour, Anke’s husband came in with their daughter. He was off to do some work in the house which is impossible with a toddler around. 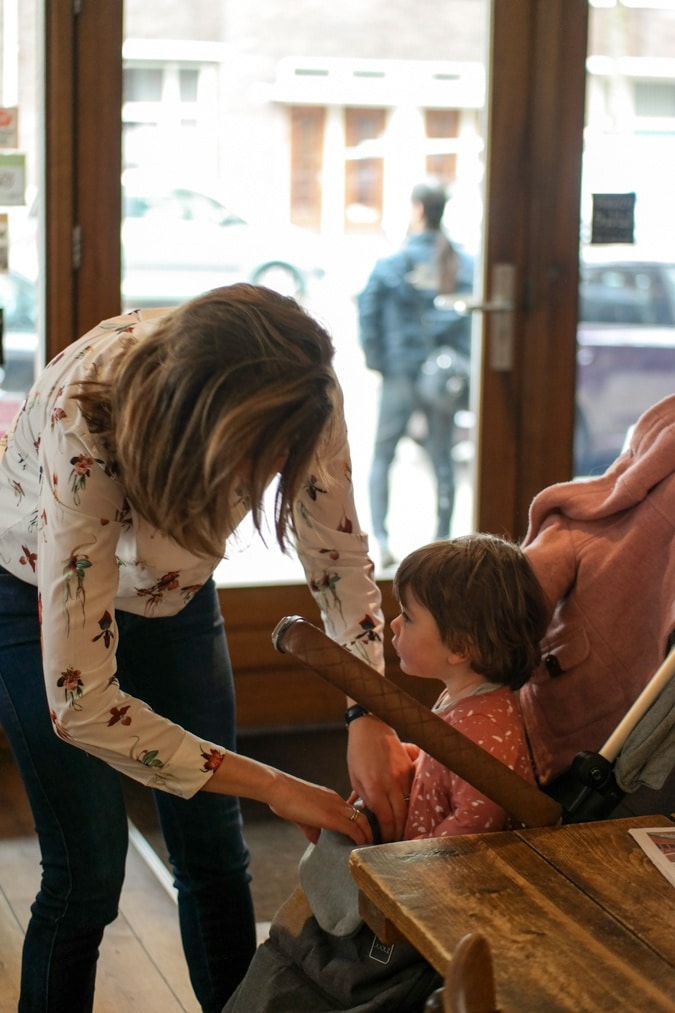 Below: I took this wonderful shot of the both of them. Adorable. (I have permission to publish it.) 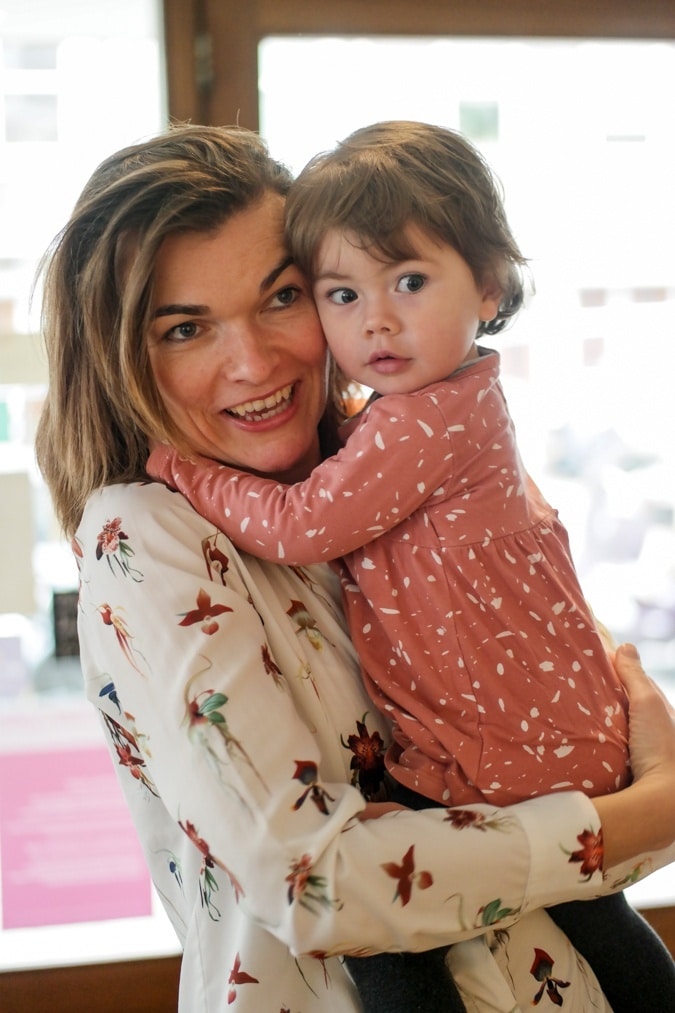 Both ladies had very interesting bags with them. Which I documented for you. And both just hung them around their neck for the photo (….).

Below: Here is Sabine’s colourful minibag. 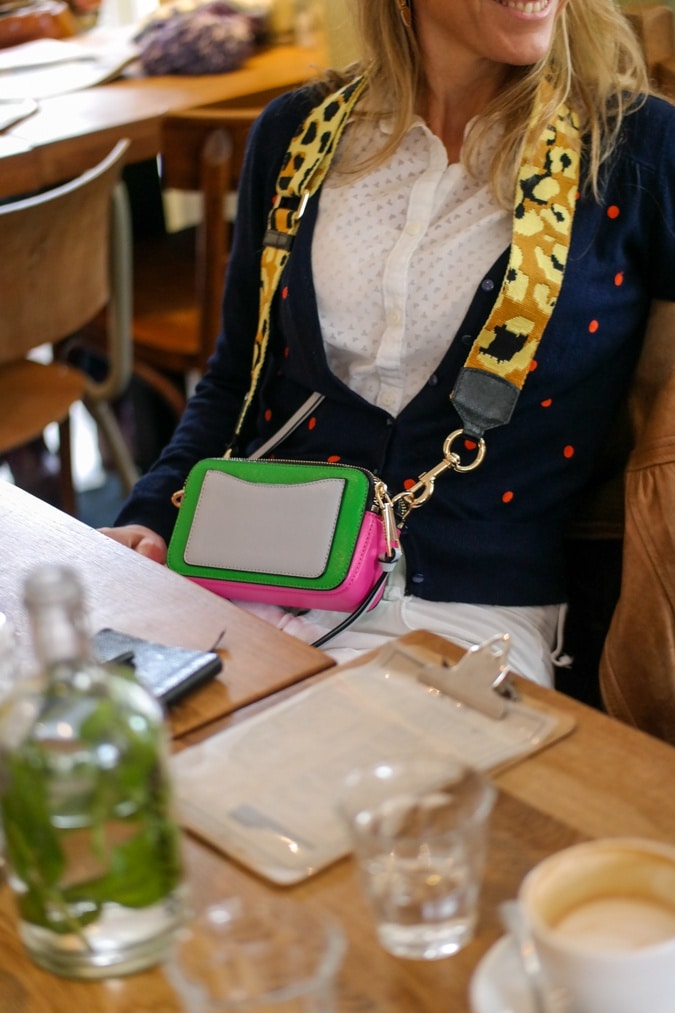 Below: And the other side of the bag. I loved it. Would have bought it too. 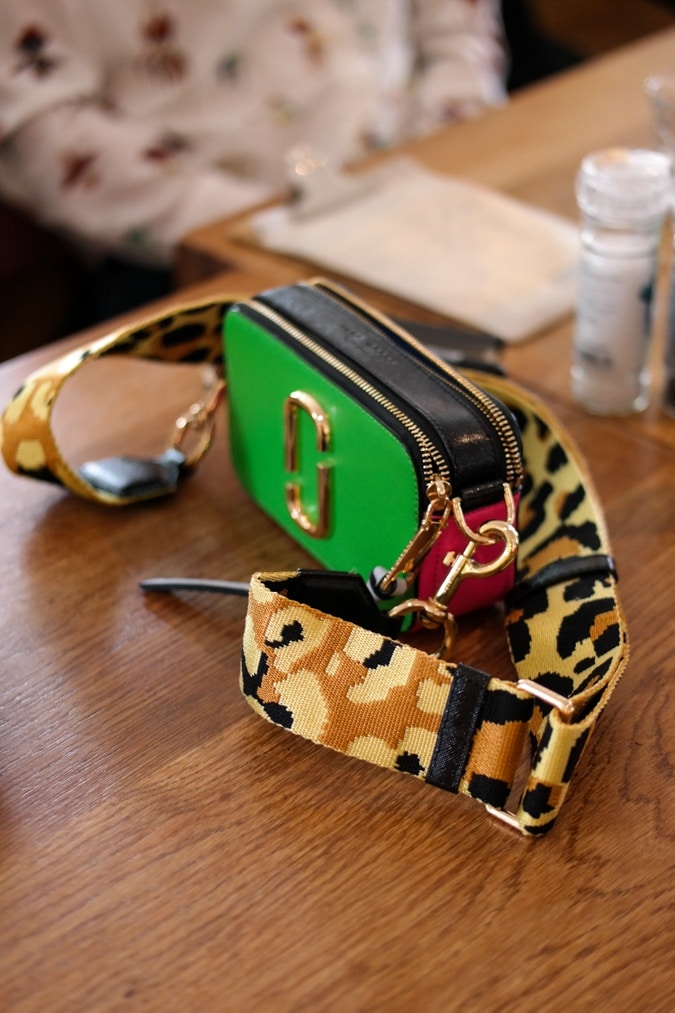 Below: Anke’s bag is totally different but equally desirable. The shape, the zip, the colour, it all makes this bag special. 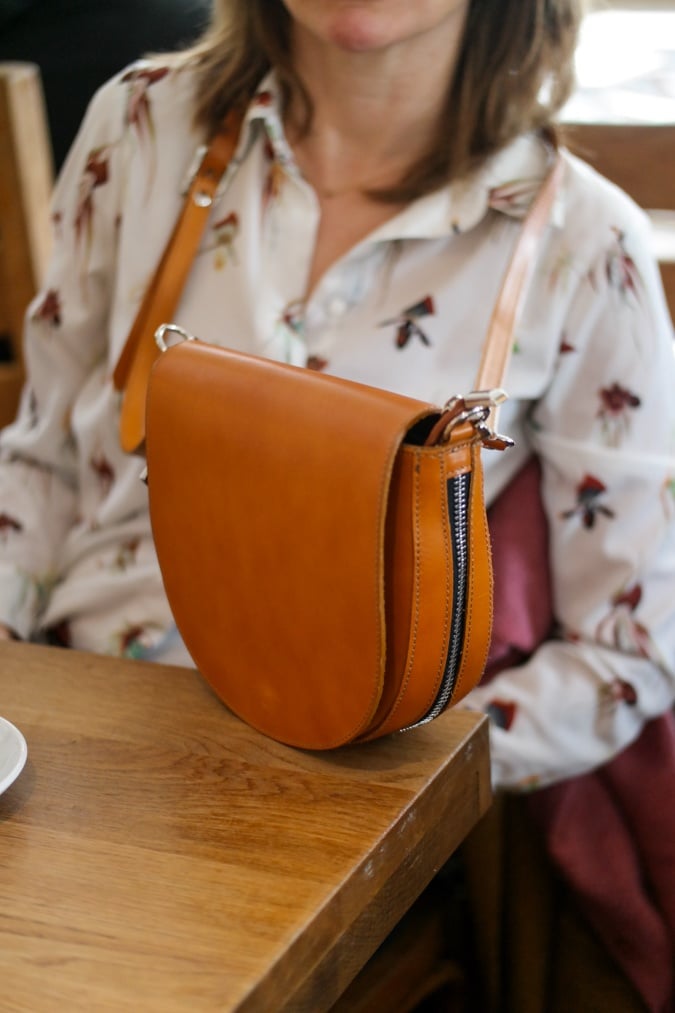 Below: Anke gave the bag to her daughter to play with. It was so funny seeing her trying to hang it from her shoulder in exactly the same manner her mother does. Before she got the bag to play with, she played with the pepper mill which was on the table. And I saw her put it into the bag (children imitate). When Anke had to go and was already outside, I saw the salt on the table and realized she nicked the pepper haha. I “ran” after her. Sure enough it was still in her bag. 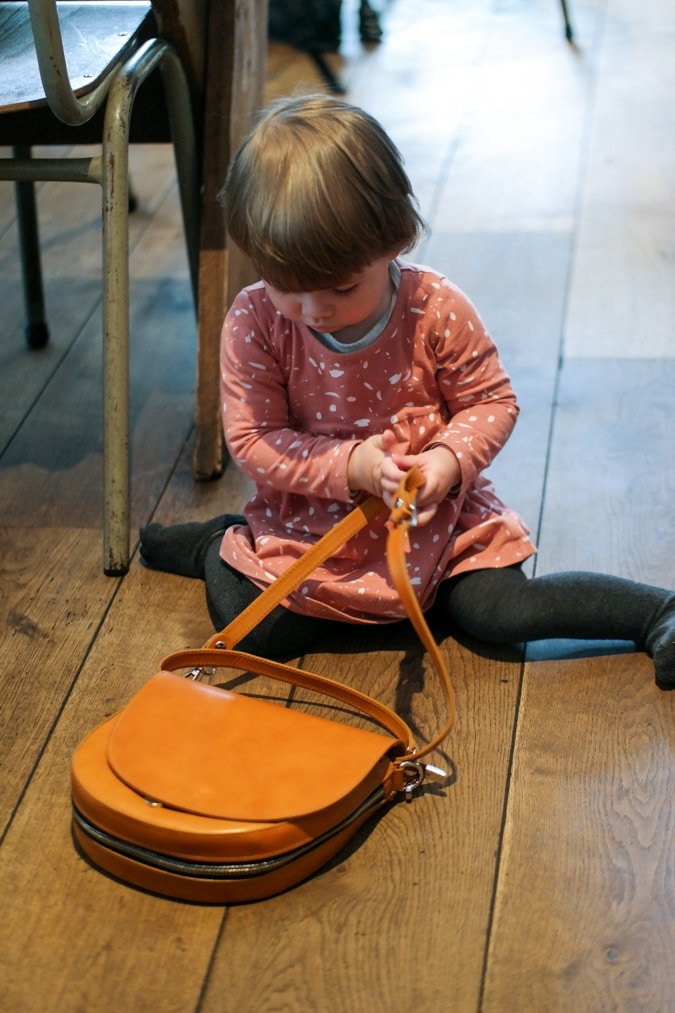 Below: After Anke left, Sabine took photos of my outfit. The bag is by Midlifechic Boutique. The jeans by Denham. The patent leather pumps I bought in Rotterdam on a Shopping Saturday with Anke and Sabine. 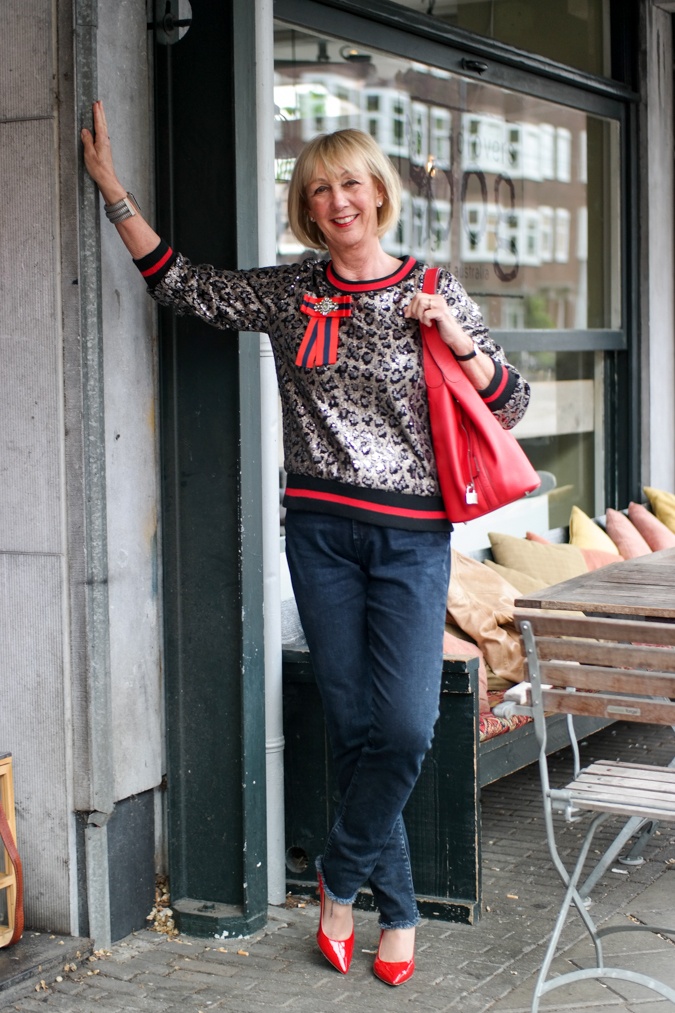 Below: Sabine ordered me to lie down on the bench … 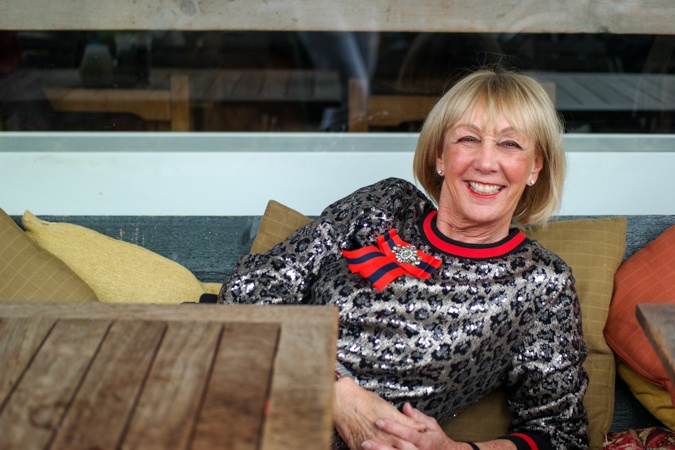 Below: …. and I pretented to eat grapes. 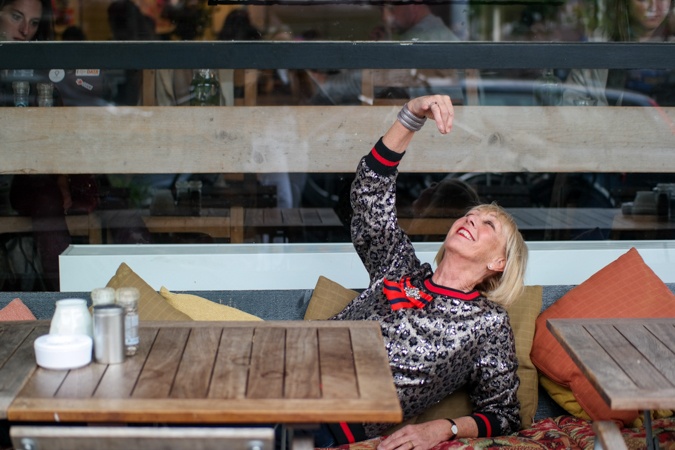 Below: Of course I also took photos of Sabine’s outfit. Her funky white jeans are secondhand and by Dolce & Gabbana. 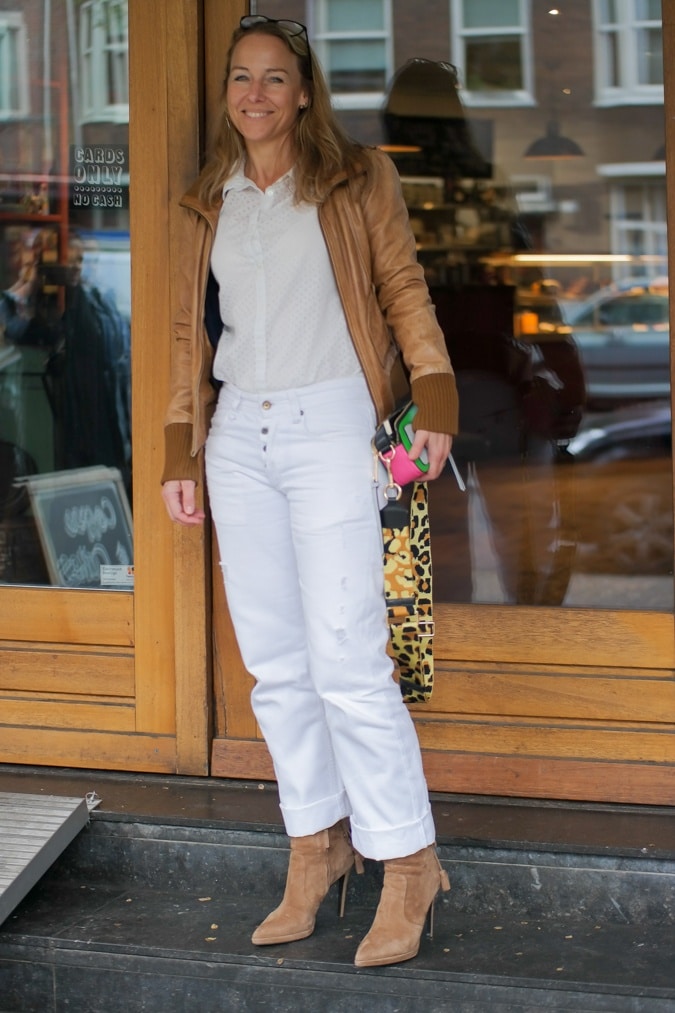 Below: Close-up of Sabine’s boots. 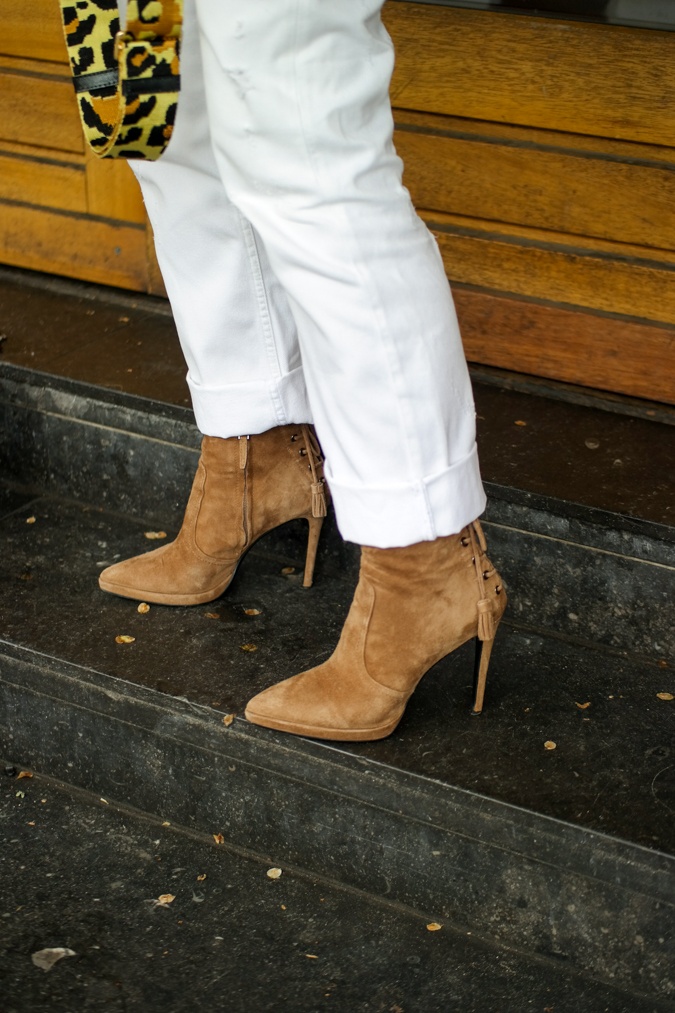 Below: The bench was a good prop, especially because it shielded us from the rain. The brooch is a gift from the Essentiel shop. They sold it attached to a jumper which didn’t suit me. When I expressed my regret, the girl in the shop told me that the day before such a jumper was bought by a woman who hated the brooch and left it in the shop. And I got it for free. Isn’t that nice? (Hmmm.. getting more wrinkly every day. Oh well.. as long as I am healthy. I cannot stop or reverse this process.) 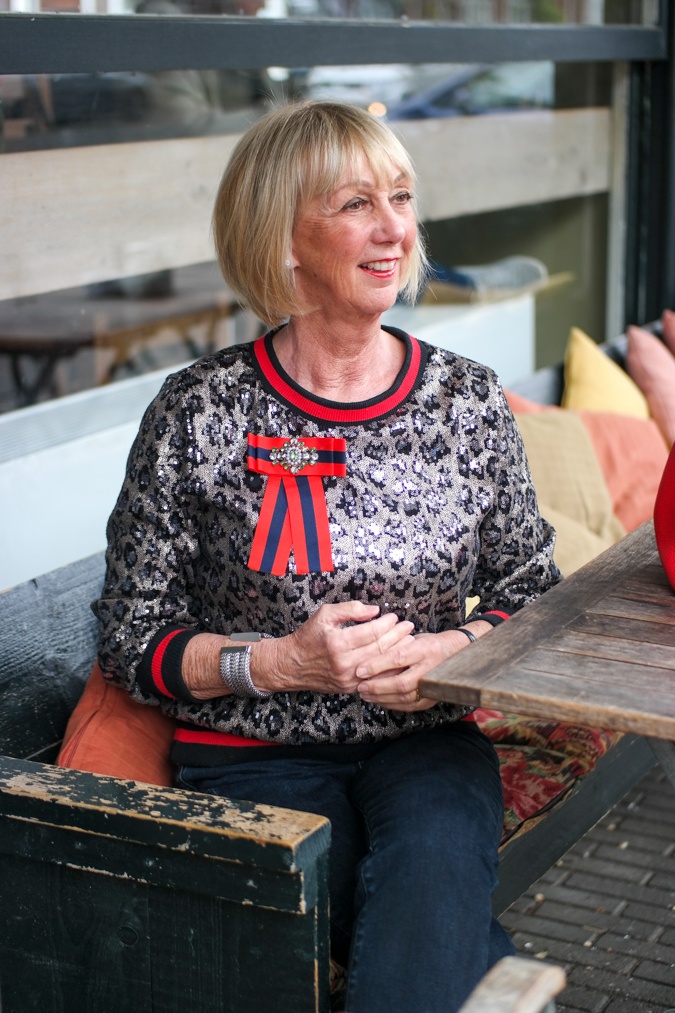 Below: Sabine wore one of her little cardigans with this outfit. She is a master in styling and her “thing” is cardigans as my “thing” is necklaces. 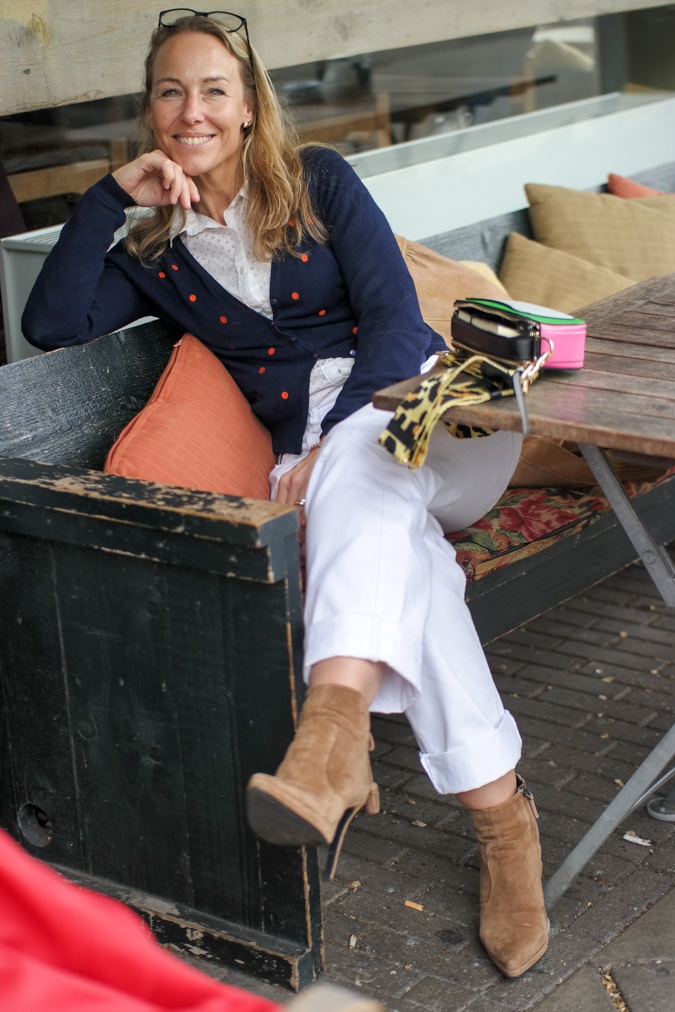 Below: Time to show my new raincoat. As I ride my bike far more often these days (good for Knee), I needed a raincoat. Never had one. This one ticked all the boxes and was very reasonably priced. I didn’t check their 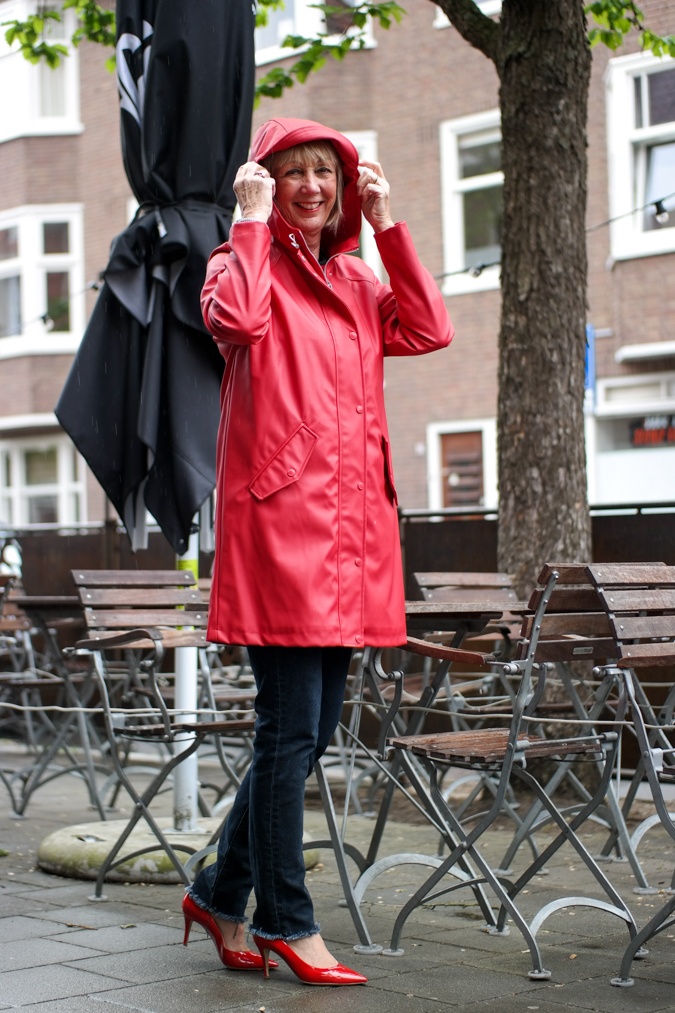 Below: For this shot Sabine had to stand in the rain hèhè. The jeans are frayed, but perhaps I should have cut off that one long one. 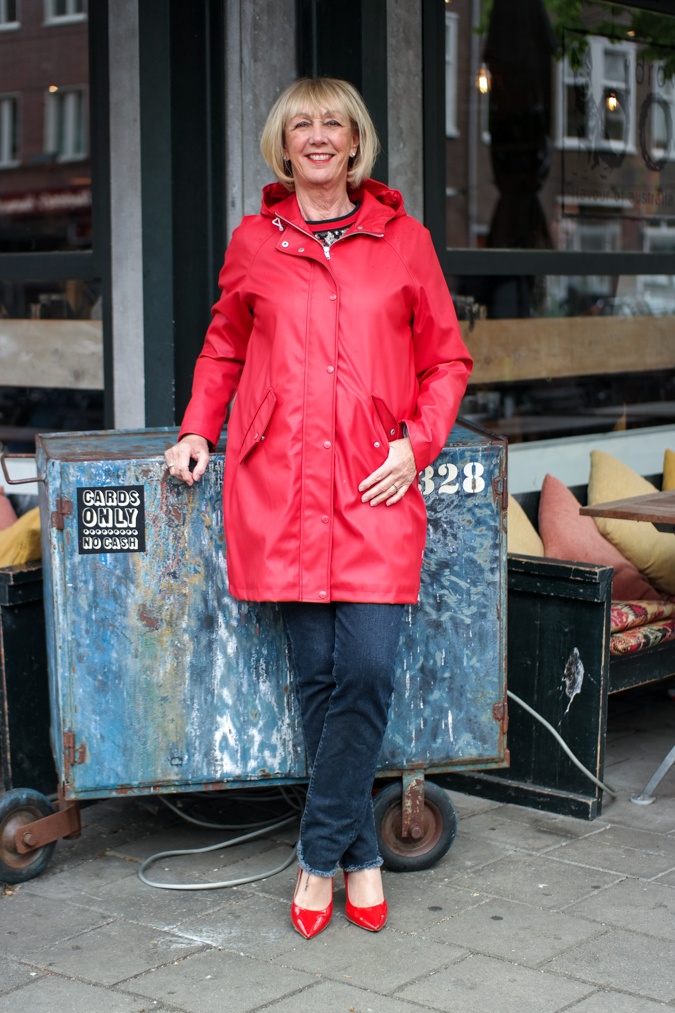 Below: Demonstrating the zip which can be opened from the bottom as well. Very handy. Sabine had to lift me up this container and get me down again. Knee and me cannot do that ourselves yet. 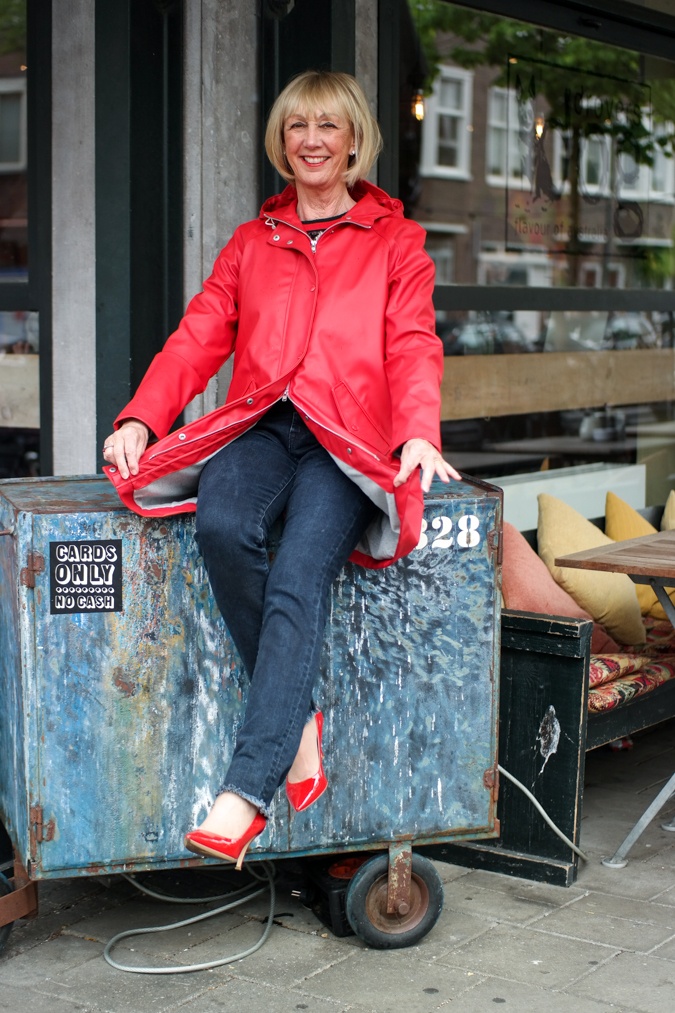 Below: Sabine and I had one hour left to do some shopping. We didn’t find much. I found a linen t-shirt with sleeves like the pink one below, but a size smaller and in cream. Quite rare, a thin linen shirt with sleeves, so yay. 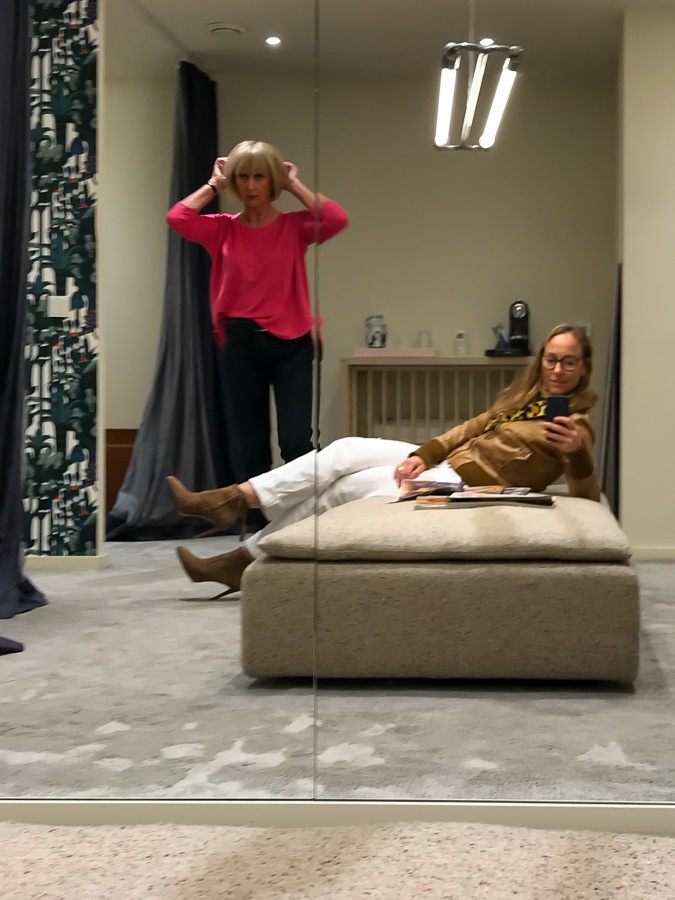 Below: A kiss from Anke. 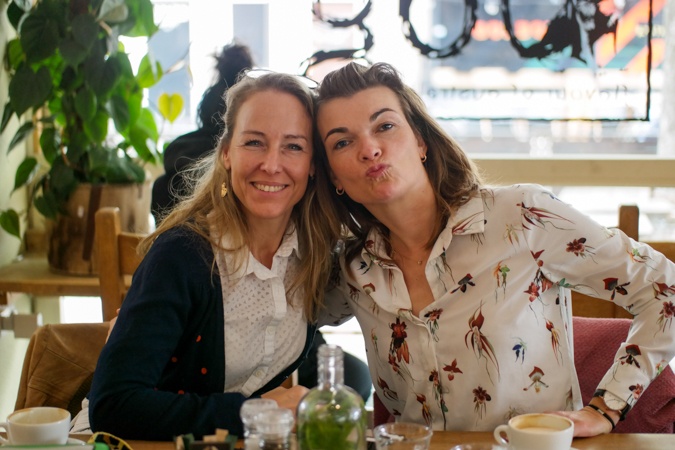 Strange week. Loads of errands to do on Saturday. Had to go to so many places downtown. A bike is very handy for such things. Dull errands like buying blusher and eye shadow, droping off the used Nespresso cups for recycling, getting vitamine pills etc. Boring. Followed by other boring stuff like checking our tax return (nothing “returning” though, just paying) and doing administration.

Sunday was mother’s day. Although my mum and I think it is a commercial idea which we should ignore completely, I always send her flowers. So she doesn’t have to be embarrassed when people ask if her children remembered mother’s day. This year I decided to visit her as well. I read about other women missing their mum and realized how special it is that I still have her. So commercial or not, I went over for a cup of coffee. Love her.

Tuesday started very badly. Some builder parked his car on the corner of a narrow street (not allowed). I decided that I could go round him and that my car fitted in the space between his car and the building container on the other side of the street…. Did you know there are handles on these containers? To lift them onto a lorry? Big, sticking-out handles in the same dirty blue colour as the container itself? No? Neither did I and I didn’t see them either. Wham, my right exterior rear mirror was smashed to pieces and hung like a dead bird on his wires. You have no idea how I can curse when I am angry. Not my finer point of course. Nobody should swear. The three builders who were looking at me, were completely mute. They expected me to rant and blame them. In my heart I did, but it was MY decision to drive on. I could have done something else. So I got out of the car, cursing, looked at the damage, cursed again and stomped back, slamming my door and driving back home as I cannot drive a car without that mirror. Then I had to go to a school in Amsterdam by public transport with 5 transfers. FIVE. As my new team had volunteered to help with a workshop for 8 and 9 year old underprivileged children. The workshop was about the plastic soup in the world, what to do and what not to do and as we are stuck with this plastic for now, how to create a piece of art with it instead of throwing it away and thereby polluting the oceans. Gosh, it took some effort to push down my anger and be nice, but I succeeded. Tried to put some uplifting text into a few young girls’ brains, like “you are worth it”, “don’t let anybody tell you what is nice or not. Only you decide what is nice for you”. You never know whether such a little seed will blossom. (Had the mirror temporarily fixed at the end of the day.)

Wednesday: fitness as usual, appointment with my seamstress to alter a few things and singing lesson. My second one. I really enjoyed that. Why I take lessons? Just because I enjoy it so much. No career hopes haha.

Below: Three photos I took while cycling back home from singing lessons. Unbelievable that this is all so close to the city. 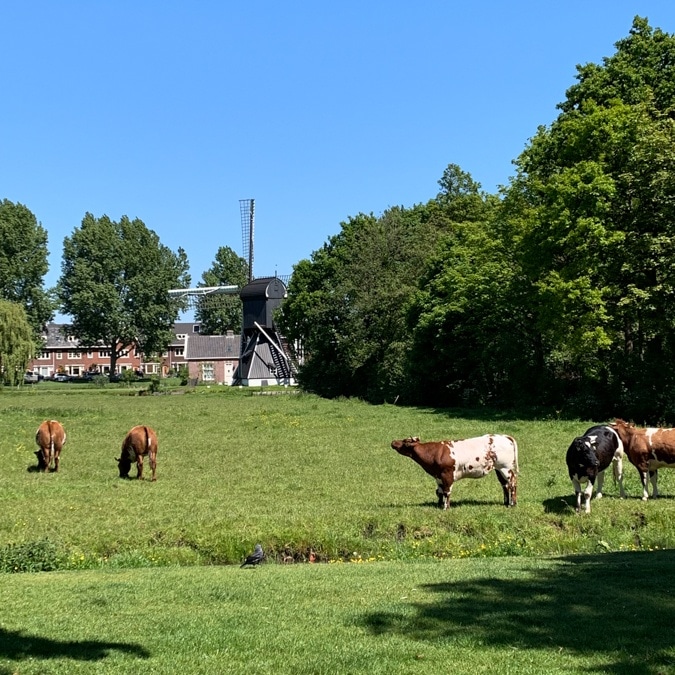 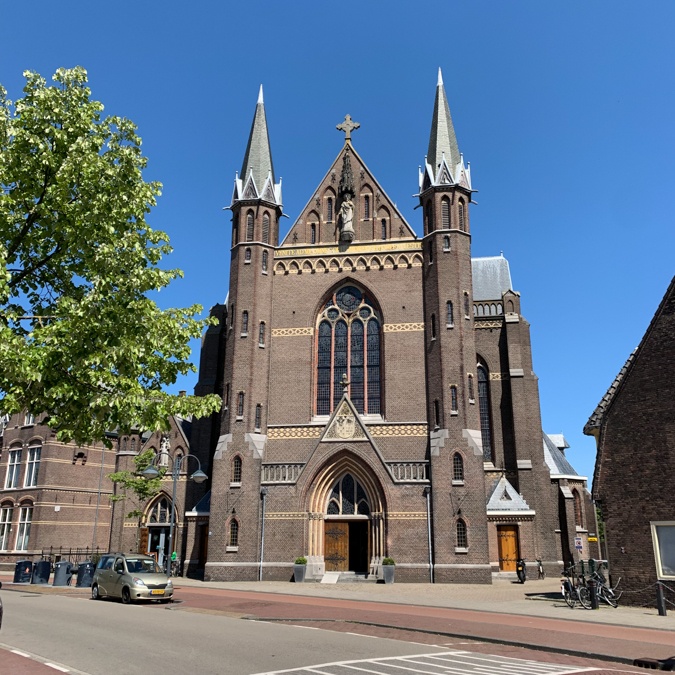 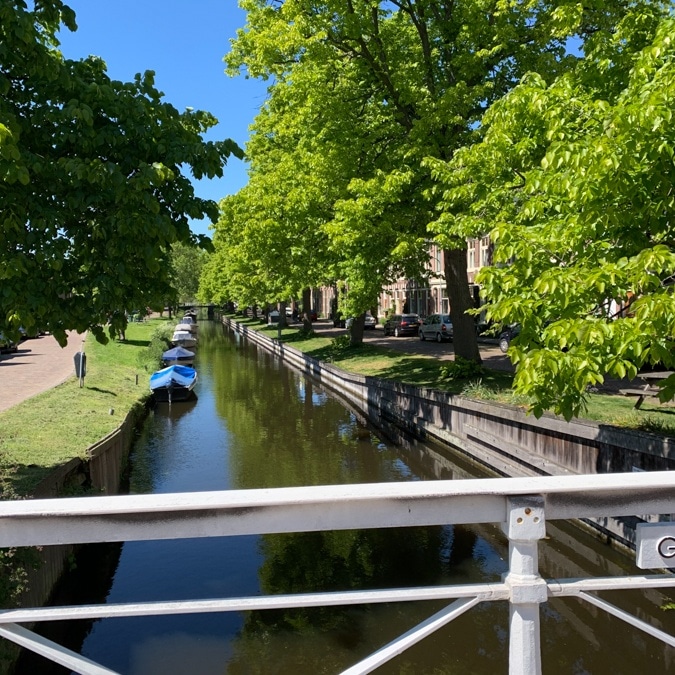 Then I had to wait for the dryer repairman. Alas, it is beyond repair. It works but it leaks. We will have to buy another one. Bummer. Our funds are low at the moment because of all the dog costs. And we also have to pay the painter who did the outside of the house. Murphy’s Law.

Thursday. Had a good day at work and in the evening I got to go to the theatre with my friend Helga. There was a band playing of 4 women over 50, very good singers. The band is called Mrs. Einstein and one of the members is my singing teacher. After their performance, which was both very good and funny, they had a sing-along in the lobby. All the visitors joined in and it wasn’t nice for your ears.

Below: The public is “singing” a Dutch song called “Kom van dat dak af” (come down of that roof). Believe me, the performance of the band before this “campfire sing-along” in the lobby was WAY, WAY better than the singing of the public but we had a lot of fun with it.

Friday: Working day and I had my exterior rear mirror repaired at the end of the day. No further news.

Below: Update of Watson, growing into a big dog so fast. 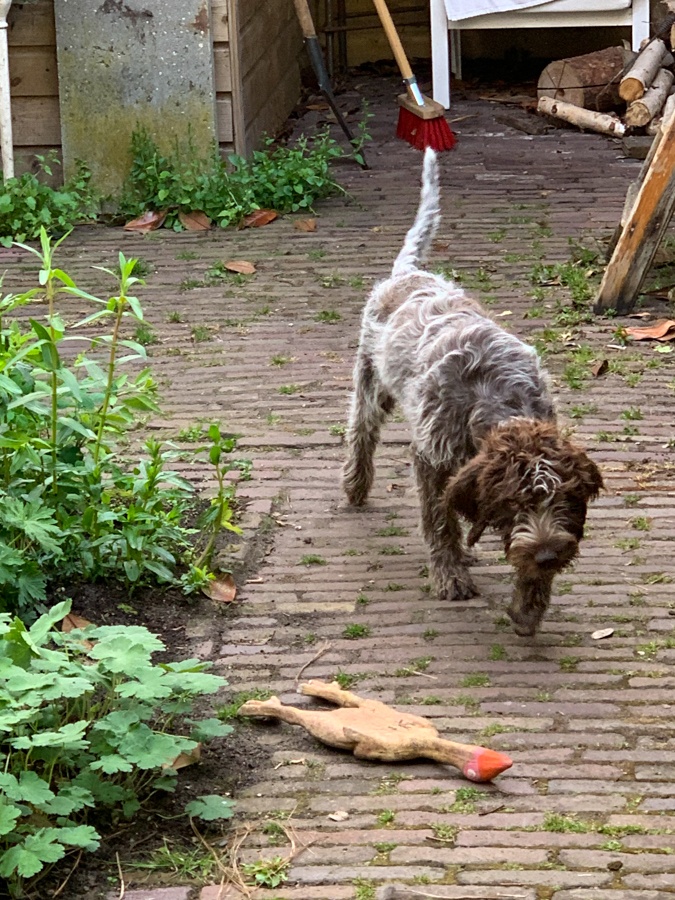