A red and pink pleated skirt 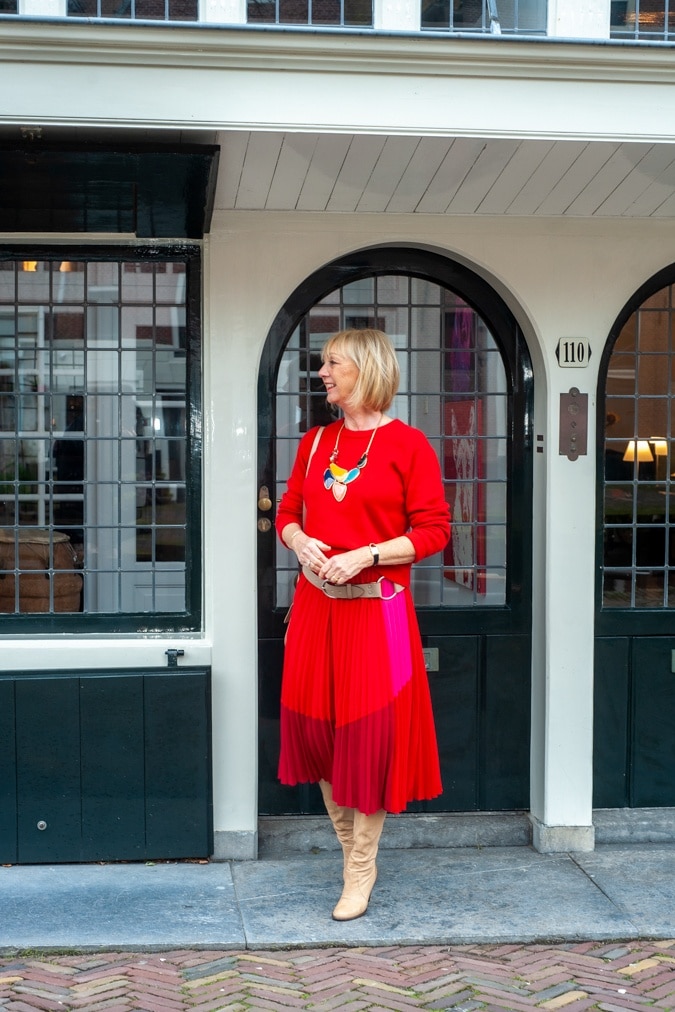 As soon as I saw this red and pink pleated skirt in the shop (kpa. in Haarlem), I was drawn to it like a moth to a flame. What a bright and cheerful piece of clothing. Red is one of my best colours…. near my face. The shop owner recommended the red jumper (sweater) which I refused at first as it is wool. She convinced me this one wasn’t itchy. Normally I regard this as a sales pitch with little truth, but previous experience made me trust her and I tried it: THE JUMPER DOESN’T ITCH. How on earth is that possible? I loved it. Therefore the styling of this outfit isn’t mine, but hers. I only added the boots, belt and necklace.

Kitty photographed and we chose Alkmaar as the town for our backgrounds. Alkmaar is a lovely old town with lots of special little shops. They are famous for their cheese market. The market (held every Friday from the end of March to the end of September) is a real tourist attraction. Cheese is transported on wooden barrows hanging between two cheese carriers, holding about 8 Gouda cheeses, each of them weighing 13,5 kilos. This video gives you a nice idea about Alkmaar and it also shows you bits of the Netherlands and the extensive use of bikes. There are a couple of short advertisements in between but I thought it was worth it. I hope you can watch from abroad.

Below: I bet these houses in Alkmaar are converted warehouses for transporting the cheese. 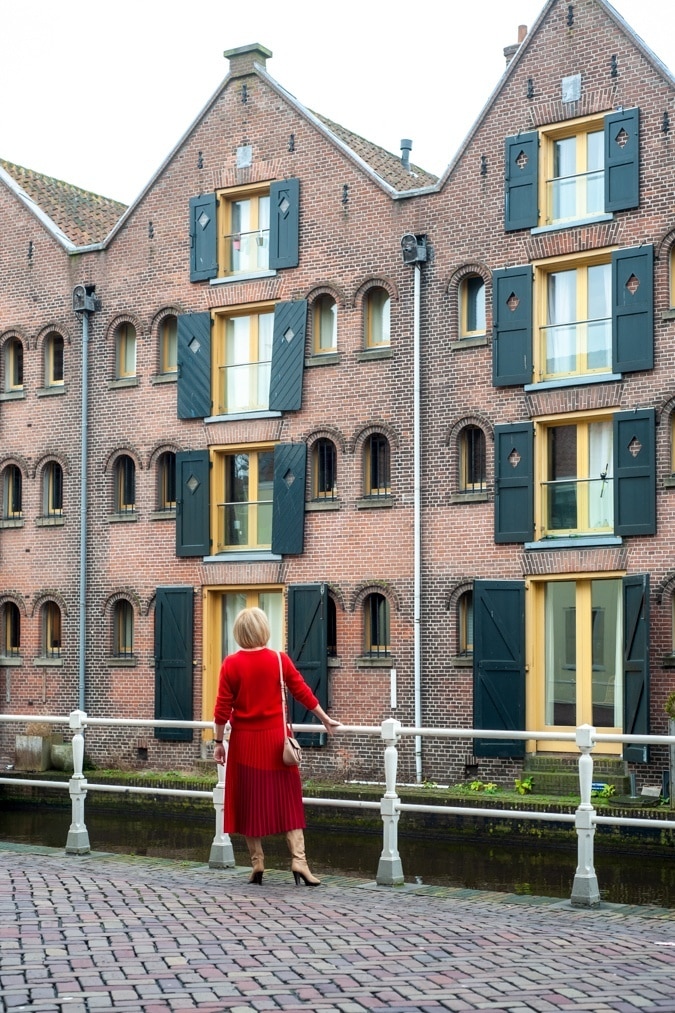 Below: Even on a grey day, the town is lovely to walk through. 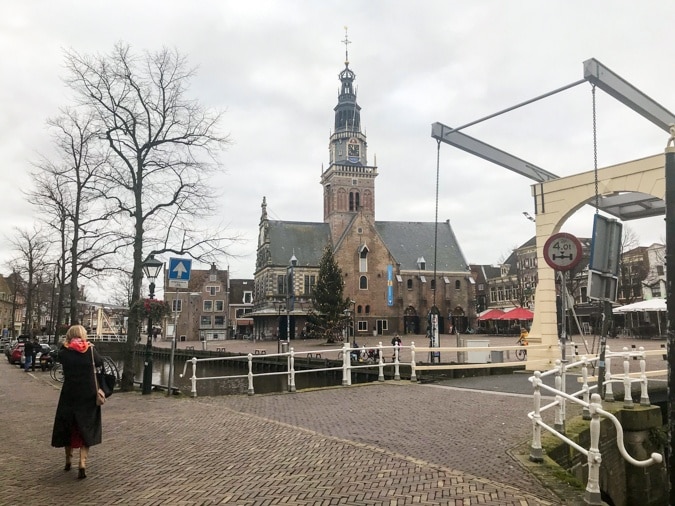 Below: This long wool coat had to keep me warm. When Kitty was ready to take a photo, bicycles were a great place to leave my coat and shopper. Never a shortage of bicycles in the Netherlands. 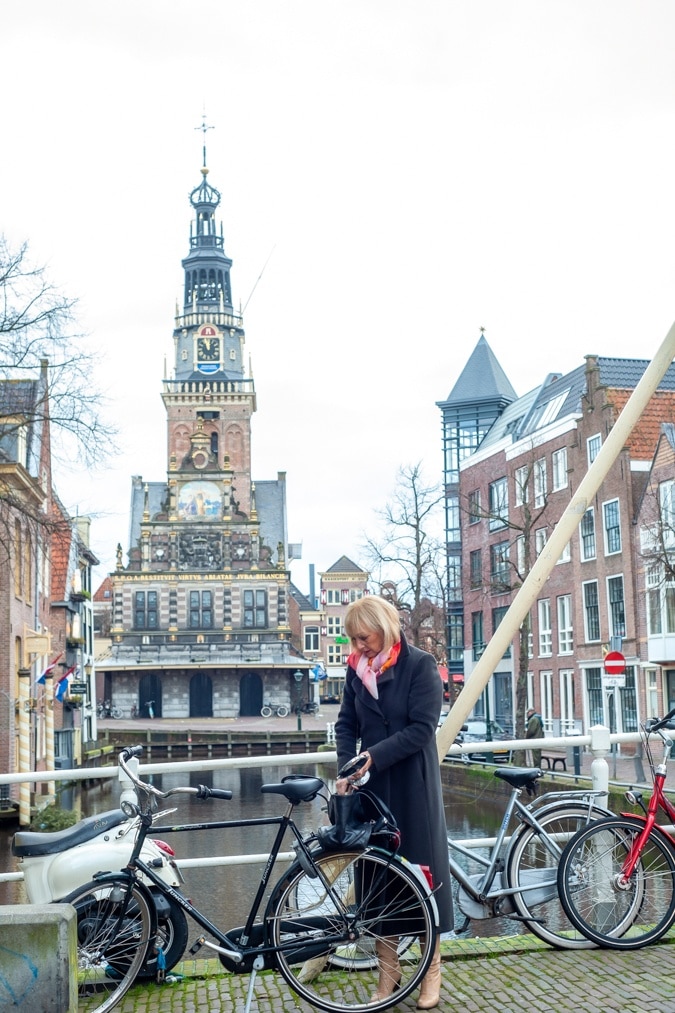 Below: We had already started taking photos at the warehouse houses. But I never checked the photos on Kitty’s camera as it was cold. 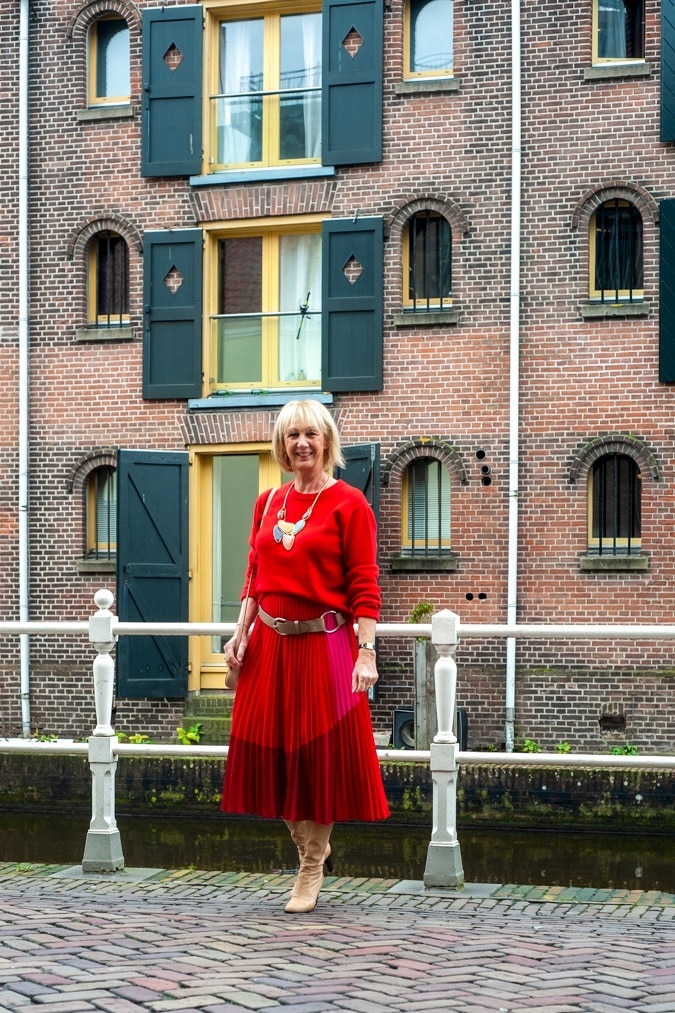 When Kitty sent me the photos she had taken that day, I found out it would have been a very good idea if I had checked them DURING the shoot. Or, even better, if I had taken a closer look at my try-out photo before the photo shoot.

Below: This is what had happened. I had added a belt to the outfit to book-end the boots. Half of all the pretty photos with lovely backgrounds were spoiled by the way my belt was hanging. It looks as if I am pregnant and the belt is supporting my belly. Awful. So I either have to wear the belt higher or dismiss the belt all together. 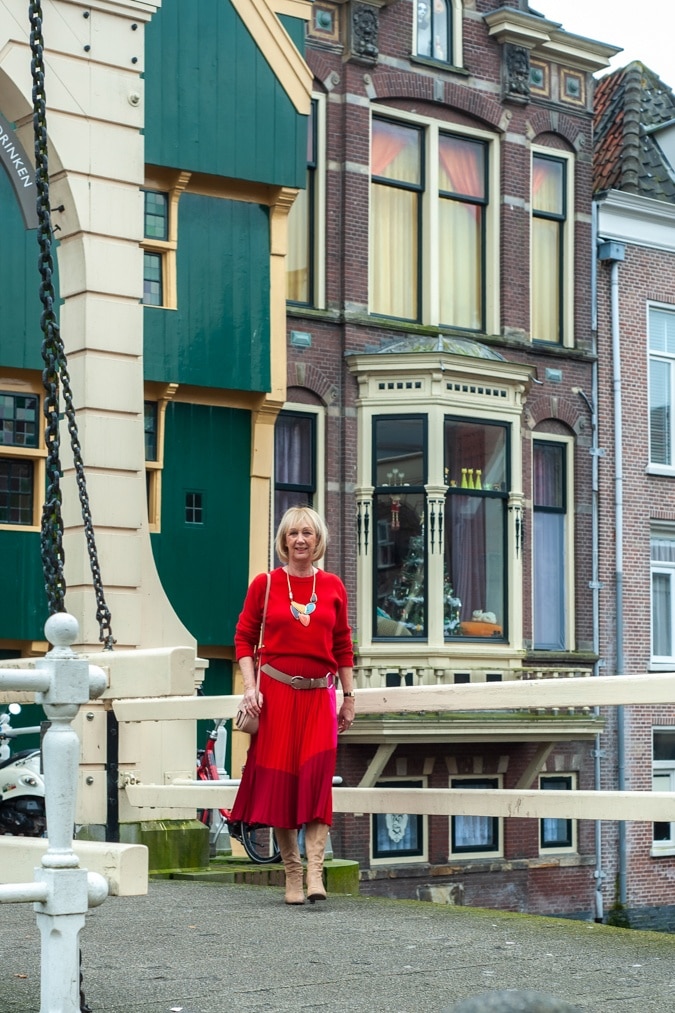 Below: This is what it should have looked like (my try-out). That belt should have been tightened to the maximum. 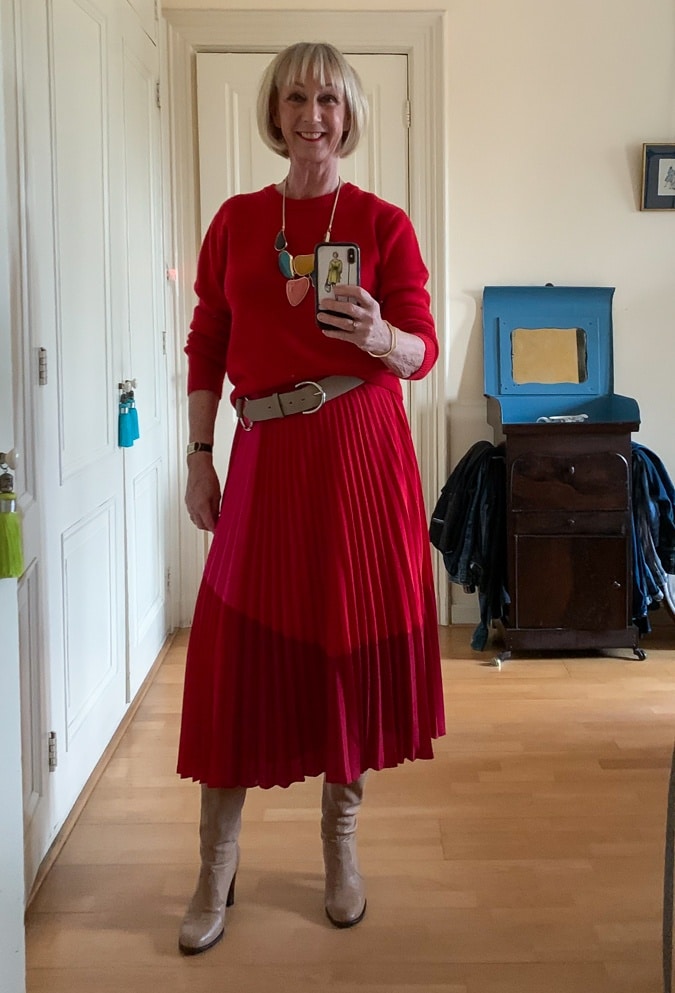 Below: Because of this boo-boo, you will only see photos with my hands in front of my belly or photos where I have hoisted the belt higher…. 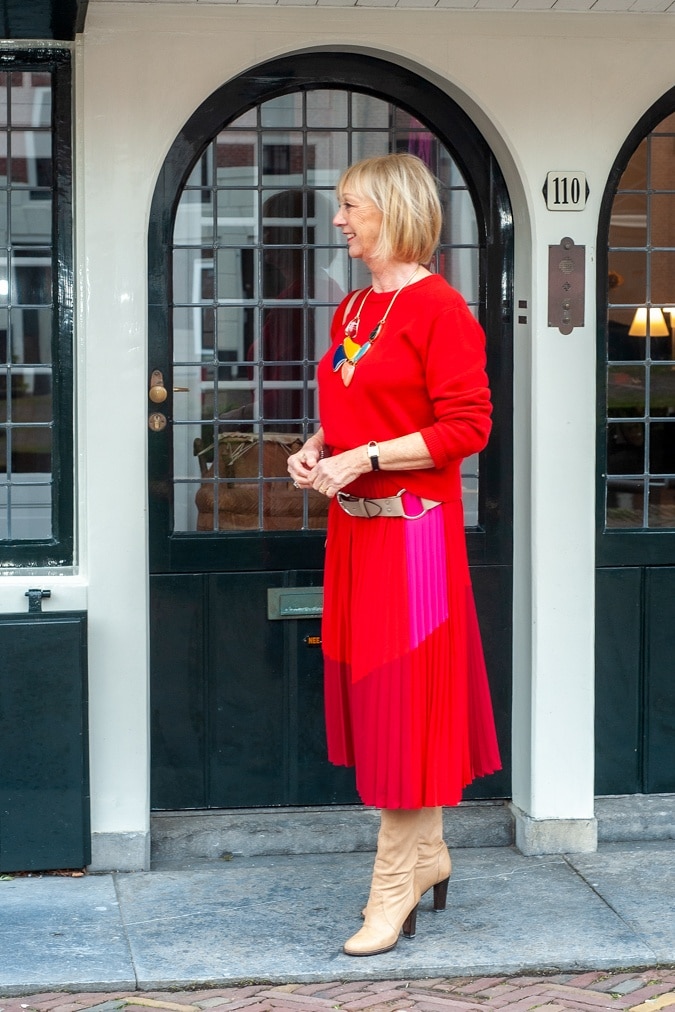 Below: Close-up of the Essentiel necklace. As I have a very narrow neck, it doesn’t have enough width at the top. This makes the pieces of this necklace twist and turn a lot. Perhaps I should glue a transparent piece of plastic behind it? 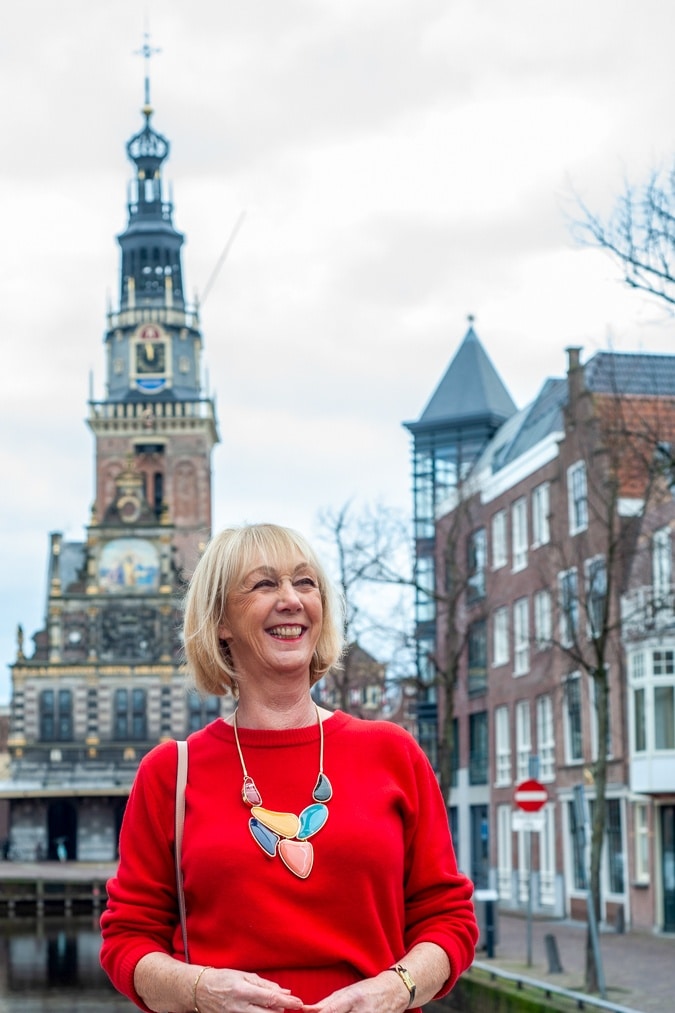 Below: We went to the centre of Alkmaar with the little shopping streets. 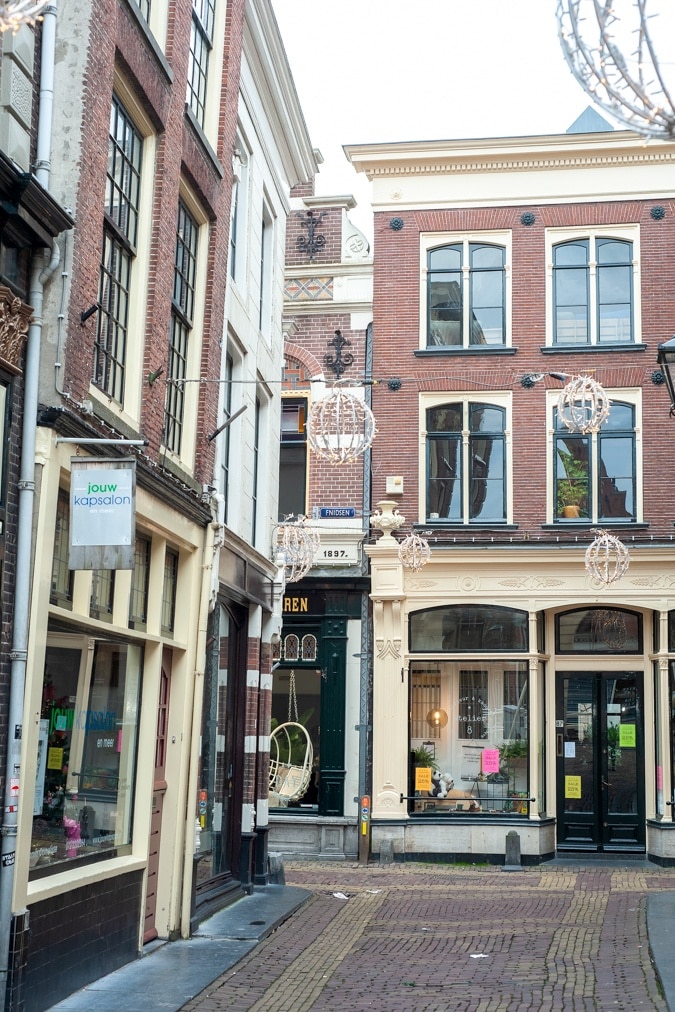 Below: This tiny street has the name Fnidsen (sounds very Scandinavian to me). I had adjusted the belt but it still is not sitting high enough. Because of the damp weather my hair decided to give up. 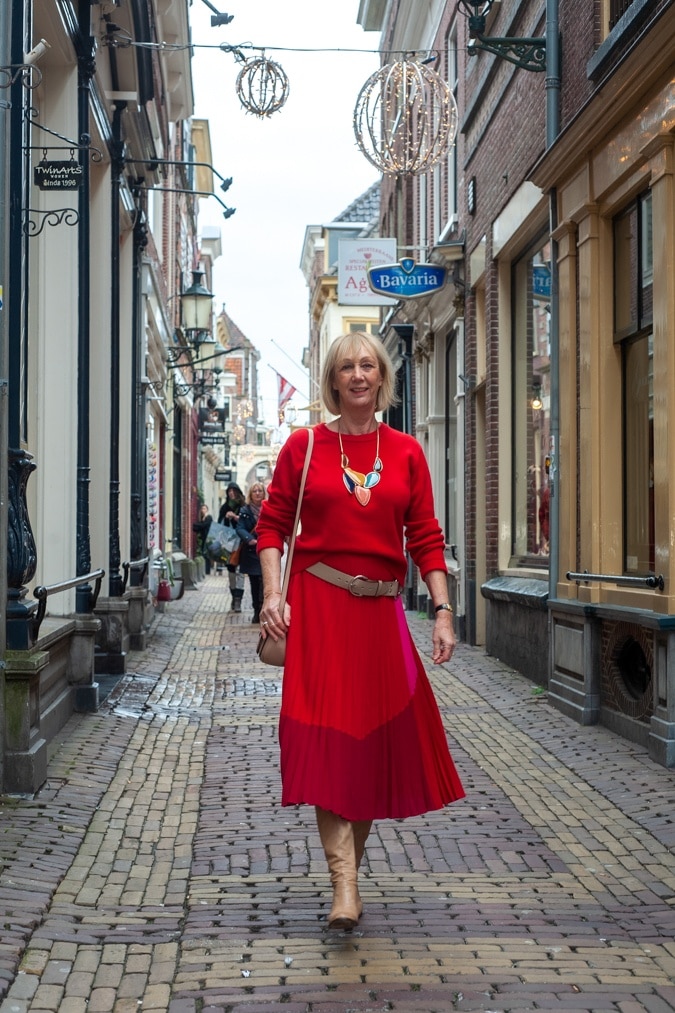 Below: Close-up of the skirt. Forget the pregnant belly, concentrate on the colours. 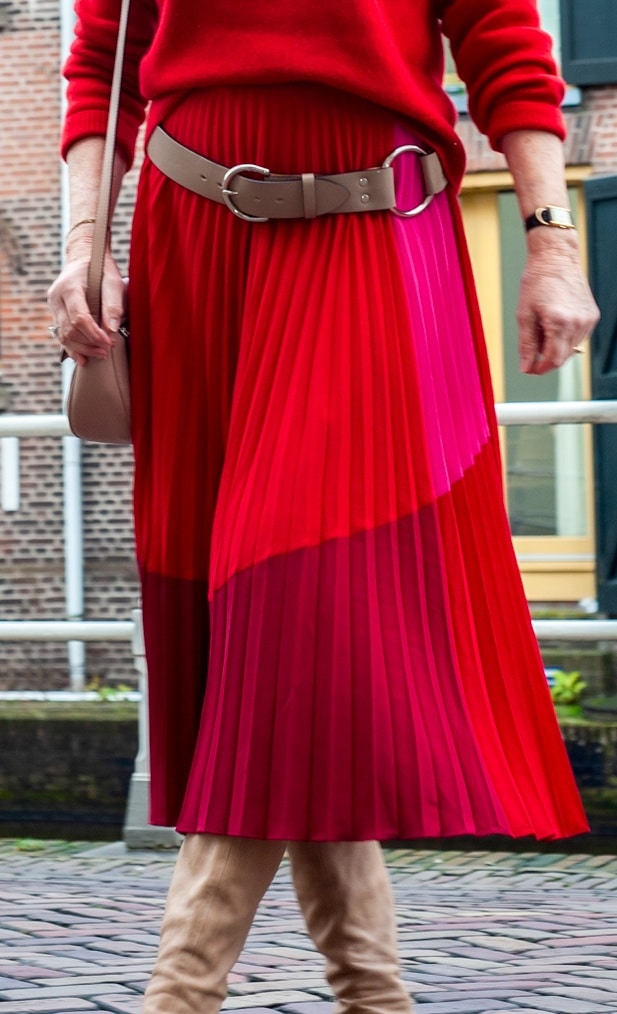 Below: It was time for lunch, so we moved on, over the bridge. 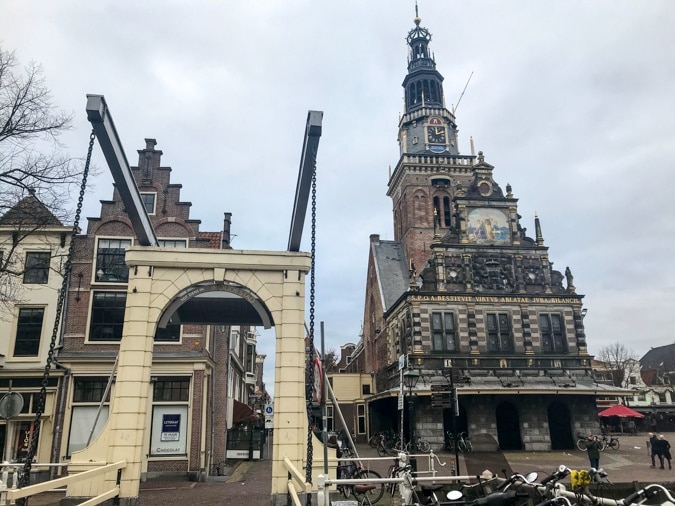 Below: This bronze cheese lady has two feet imprinted in front of her. It says: “Beemster (= a Dutch cheese) kissing point”. 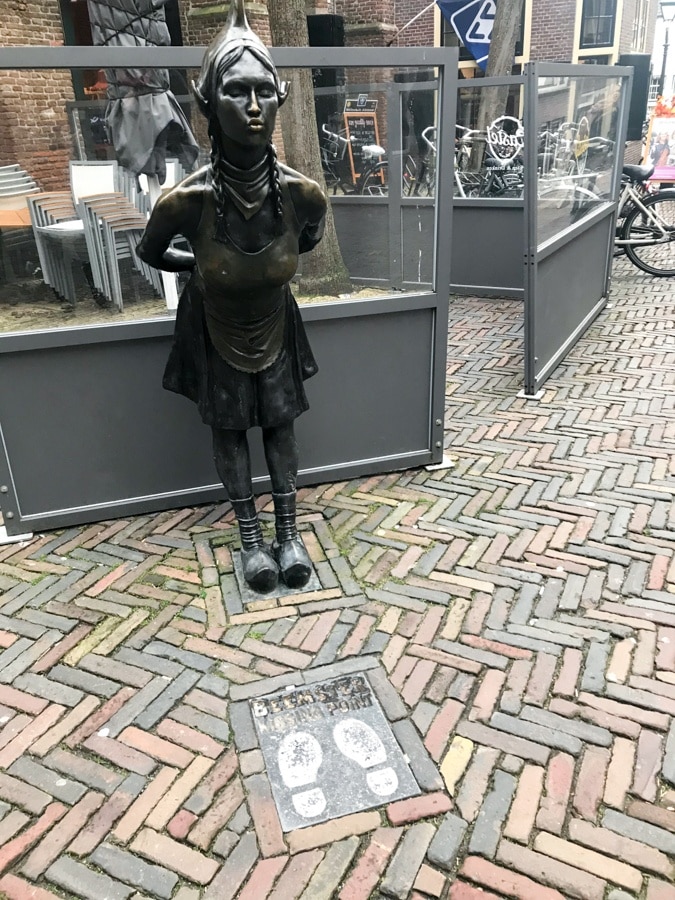 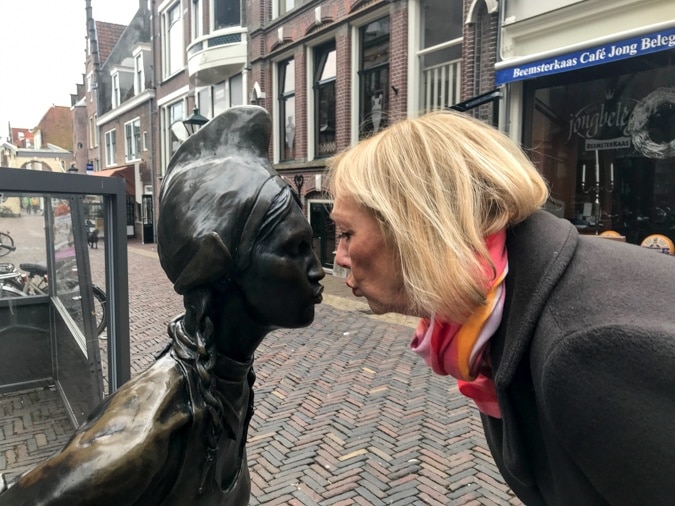 Below: Kitty, who was born in Alkmaar, guided me to a restaurant, called Heeren van Sonoy, which used to be a convent. It is situated in the courtyard of one of the almshouses. As it happened I had visited this place before with Sylvia of 40+ Style, in the summer of 2017. 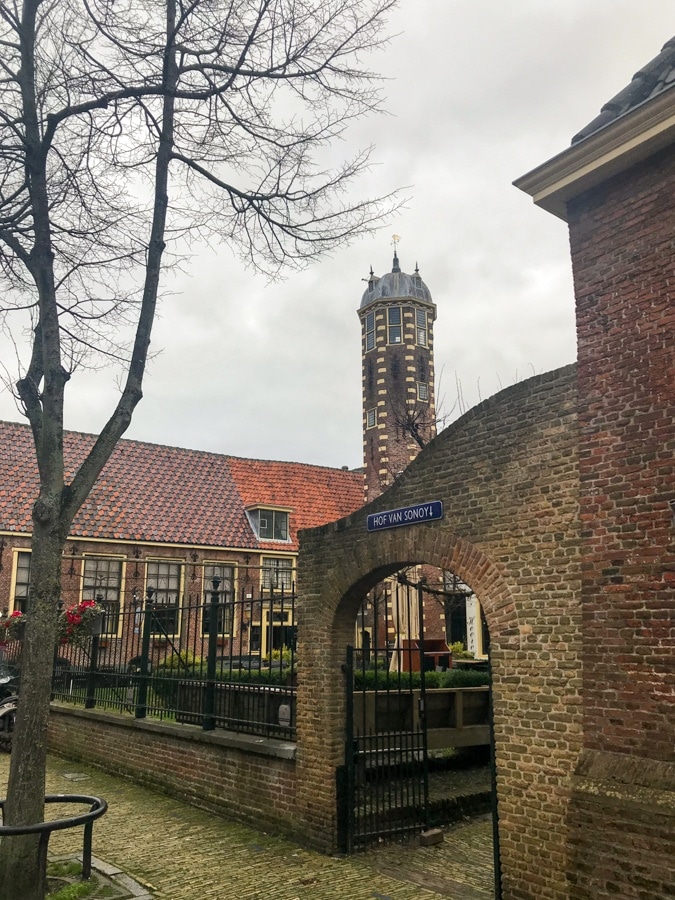 Below: It is a really nice place. When I was there with Sylvia in June 2017, we sat outside in the garden. Not such a good idea in January. 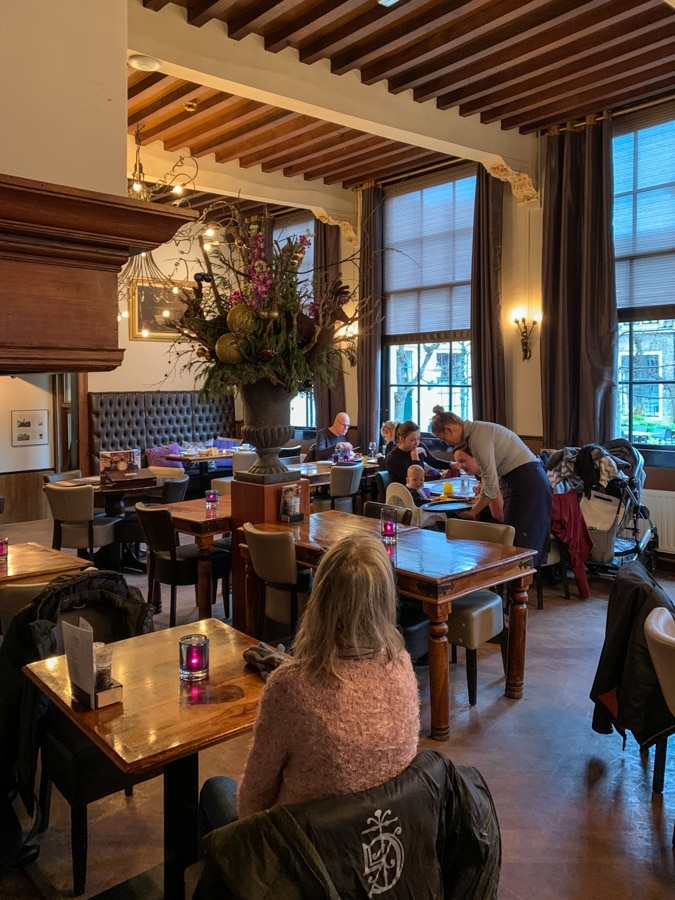 Below: Vague selfie of Kitty and me. “Fluffed up” my hair. 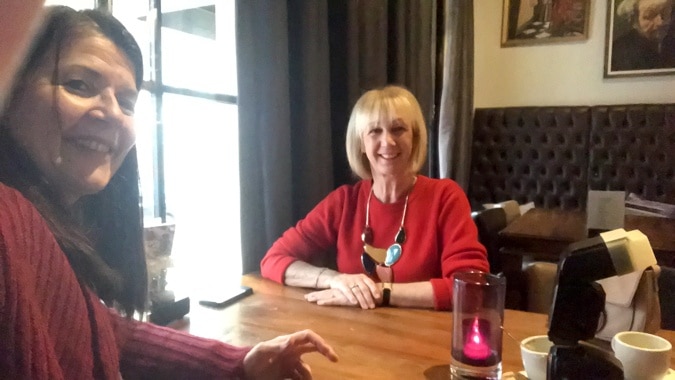 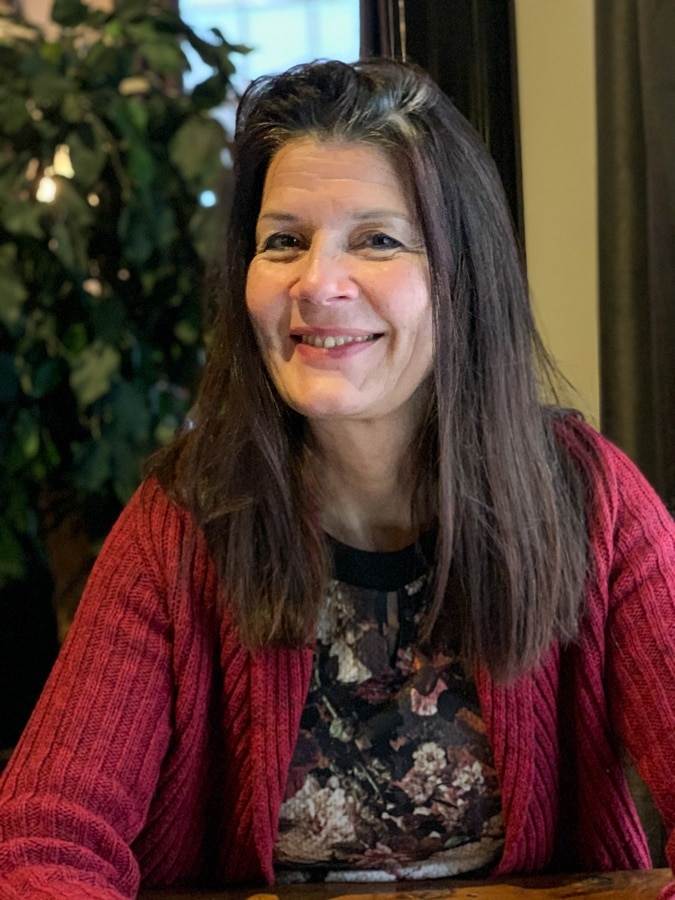 Below: I let Kitty take off her coat outside as I had to do (grin). She had bought new boots and wore a lovely dress with cardigan. 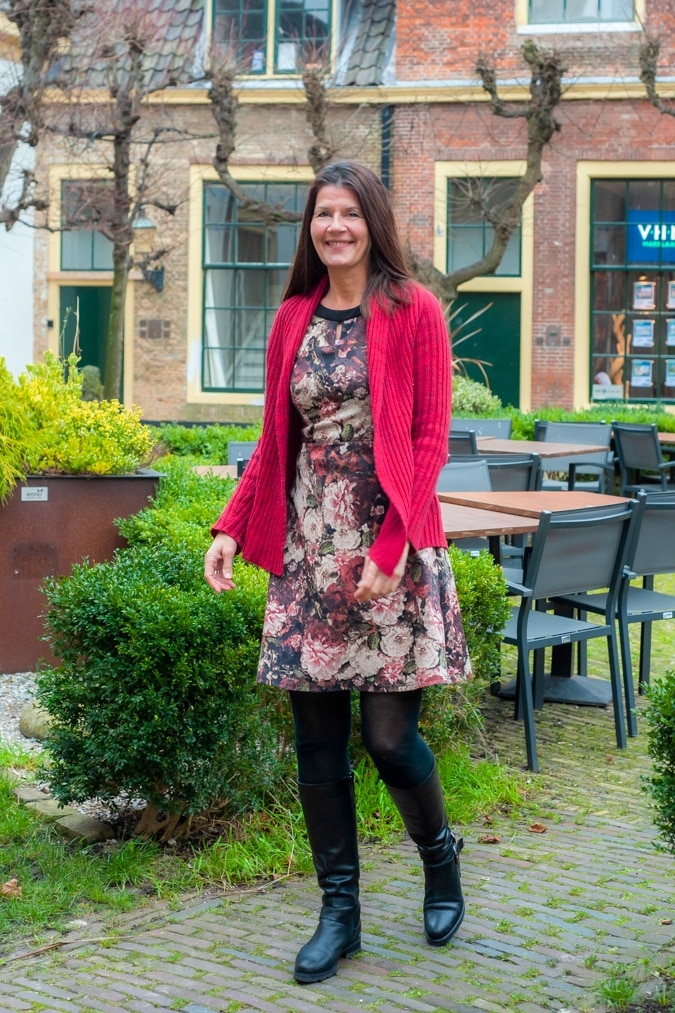 Below: Walking to the car, we saw this mannequin in a shop window. Quite spectacular don’t you think? 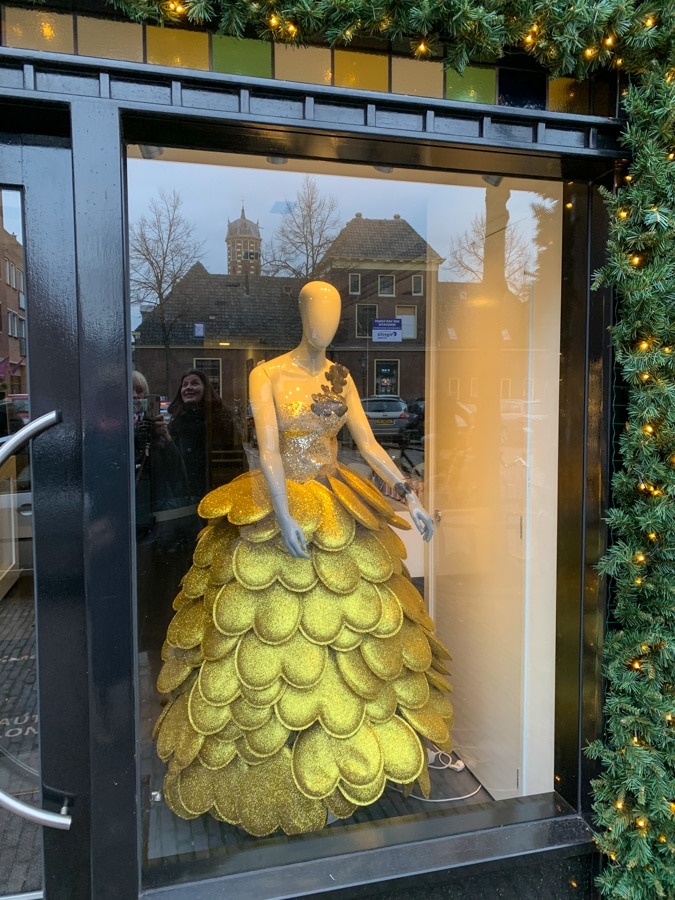 Saturday was a peaceful day. Not much to do but clean the house as our help wasn’t coming that week. Last time she couldn’t come, Ron did all the chores, so it was my turn. I hate it, like I hate cooking. From when I was 25 and sharing an apartment with another girl, I had cleaning help. I am not a good housewife.

Sunday: photo shoot with Kitty which was fun. Read a book.

Monday: my successor has started and I am breaking her into the work. YAY… She is a very lovely and very accomplished woman. Having a ball at work.

Tuesday: after work most of us at work went to see the yearly cabaret, performed by our colleagues. The performance featured a lot of jokes and sarcasm over things that happen in the bank. It was a fun evening in the theatre. The theme for this year was movies. Below you see the Sound of Music. 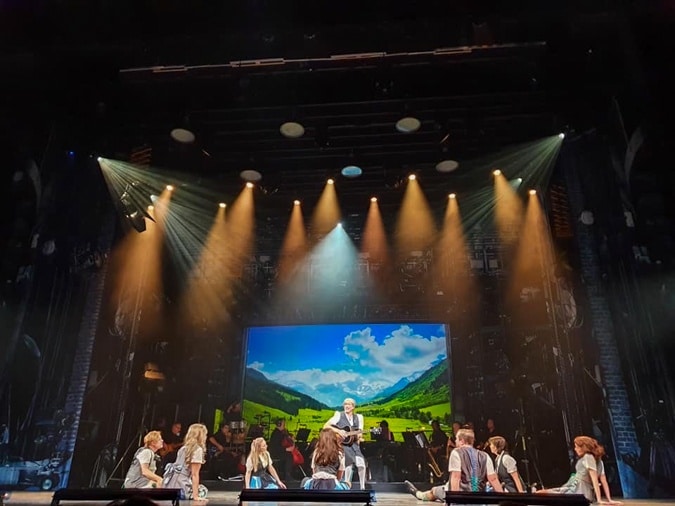 Wednesday: I dropped off the big dog bed at the seamstress. Why? you might ask. One evening last week, we saw that Watson was peeing on it. What the heck is the matter with that dog? Ron walks him very regularly and in time. We gave the dog bed to the dry cleaner as it doesn’t fit in the washing machine. Fortunately they accepted it. Once it was clean again, I could take it to the seamstress. She is going to make a cover from material like a plastic tablecloth. Plus a canvas cover. Expensive dog.

The Christmas tree has gone and we needed a new plant to replace it. Our previous plants in that spot have all died because there is too little light in the middle of the room. We succumbed and decided to buy an artificial one at a store which specializes in these things. Found a beautiful maple plant (Acer). Needless to say we picked the most expensive one in its height. Still, it is less expensive than buying a new real plant every year. We have to dust this one whahaha. 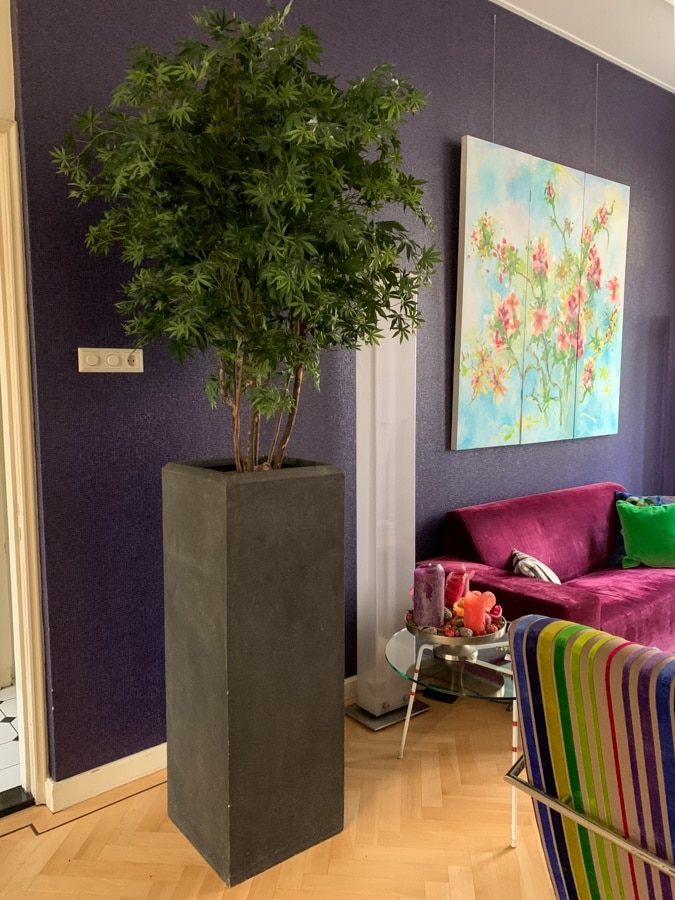 Below: I wore this outfit that day. Leopard ankle boots by Eijk Amsterdam (they have a wedged heel that looks like a stiletto heel). 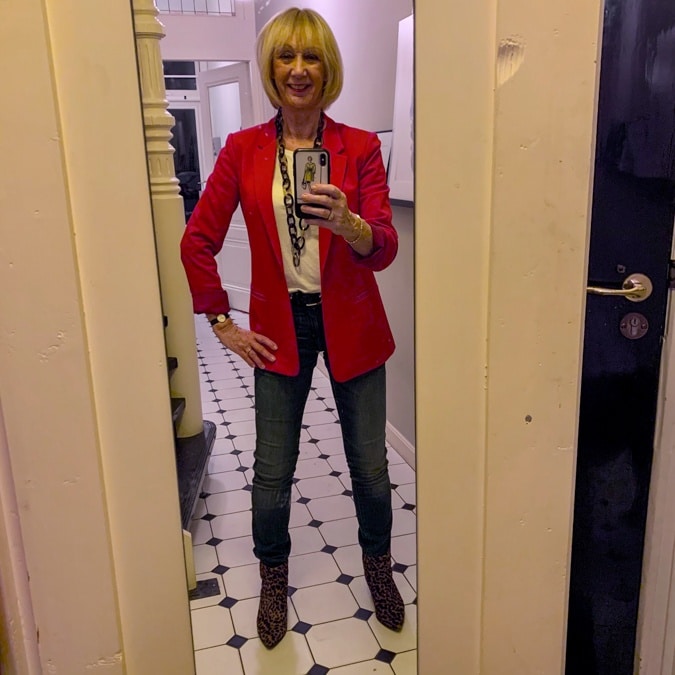 In the evening we picked up an old wooden ladder we found on the Dutch equivalent of Ebay. The seller turned out to be living one street away from us. What are the odds? We use this ladder in the garden for our cat; to give her easy access to the fence. Aren’t we nice? As it is wood and always exposed to the elements, it rots away and we buy a new (second-hand) one every two or three years. No artificial things here. We don’t want to look at an aluminium ladder in our garden.

Below the ladder at the left and bottom right a reluctant dog who thinks I am only calling him to take his toy away. I was trying to take a decent photo of him as the 11th of January was his birthday. He is now 1 year old. Children and babies…. murder to photograph. 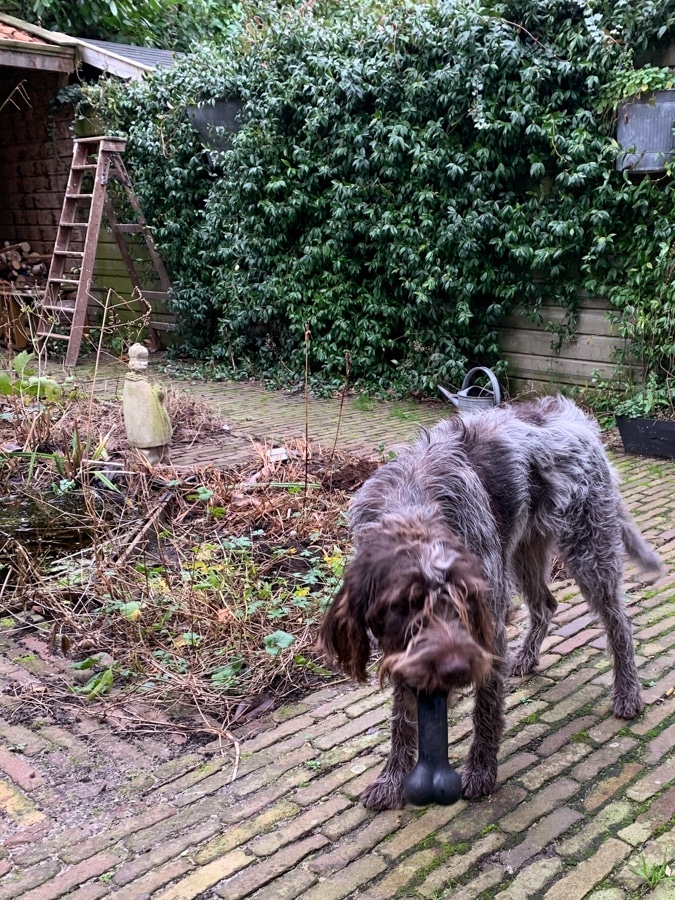 Thursday: lots of meetings and an alarm went off at work to evacuate the building. We were halfway down the first set of stairs when we heard it was a false alarm. That was the most exciting thing of the day. Laughed out loud a couple of times with my colleagues. When I got home, Ron had bought a new (real) plant (a Kentia Palm) for the spot near the windows in our living room. 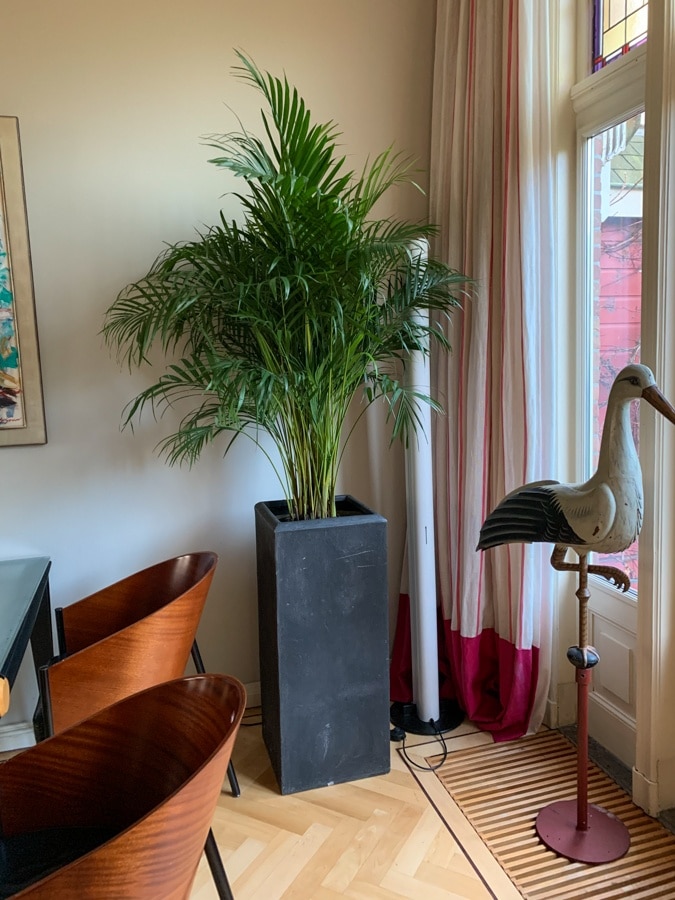 Friday: worked at the office because I had a meeting. Which fell through.. damn, I could have stayed home. The laughter with my colleagues made up for it. 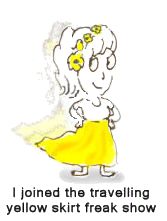