Double-breasted jacket and lunch with Anja and Misja 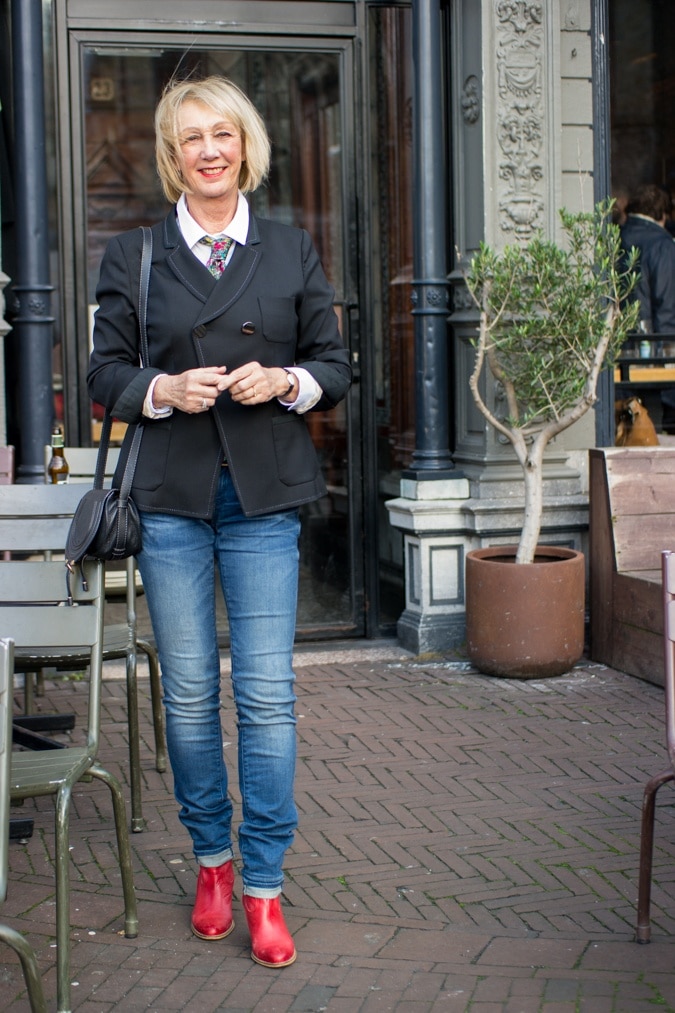 Normally I wouldn’t post a photo with such windswept hair but Misja, who took this photo, said it was total nonsense. Misja has her blog MisjaB and is a good photographer. As she can look differently and more objectively at me, I will take her word for it. This is the double-breasted jacket of my trouser suit. The suit that I couldn’t style as I told you a couple of weeks ago. Wearing both items separately is the only solution. You already saw the trousers with a jumper three weeks ago (at the end of the post) and here is the jacket combined with jeans.

I took a very old and colourful tie of Ron’s and emphasised the colour red with the (old) ankle boots. Misja made me turn up my sleeves for a more casual effect. The shade of red of the boots isn’t quite right in this photo above; the photos below show the colour better.

But let’s start at the beginning. Misja, Anja (Curly Traveller) and I met for lunch at café/restaurant Fortuyn on a Saturday. We form the Haarlem Bloggers, but the fourth member (Sylvia of 40+Style) was still in Singapore. Too bad.

Below: Anja arrived soon after I had claimed a table for the three of us as it was very busy. She was wearing a jumper (sweater) with birds.. 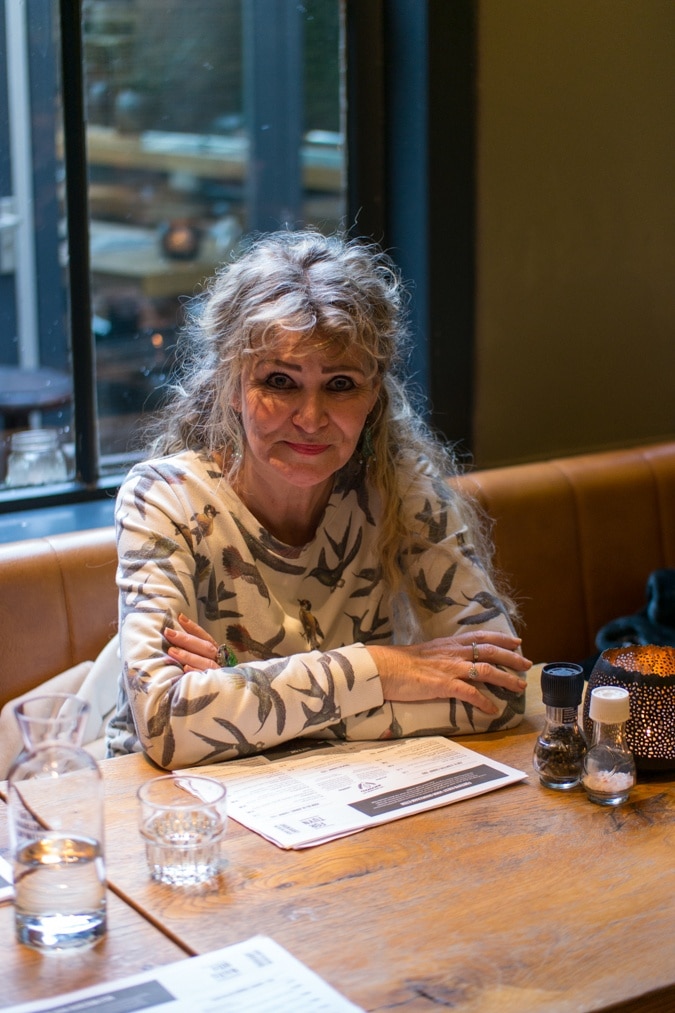 Below: … and a matching ring with a bird. 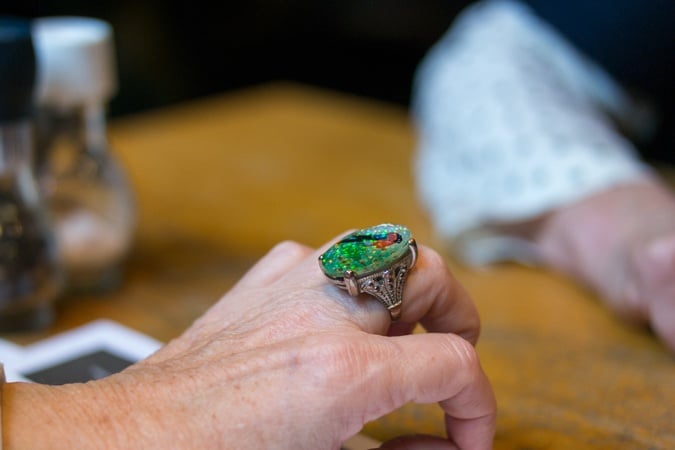 Below: Misja arriving, well protected from the cold. Cute hat. 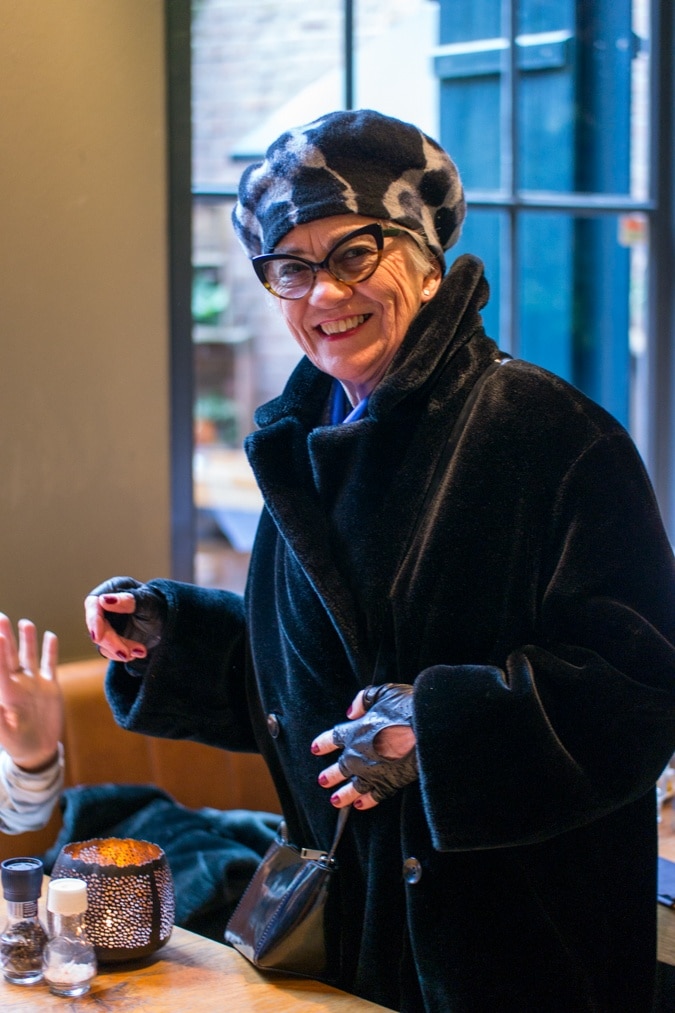 As we always do, we chatted, gave an update on what we were doing with our life and had lunch. Far too quickly we had to say goodbye again.

Below: Misja took this picture outside restaurant Fortuyn. (I am pulling a bit of a strange face.) This is the right colour of the boots. 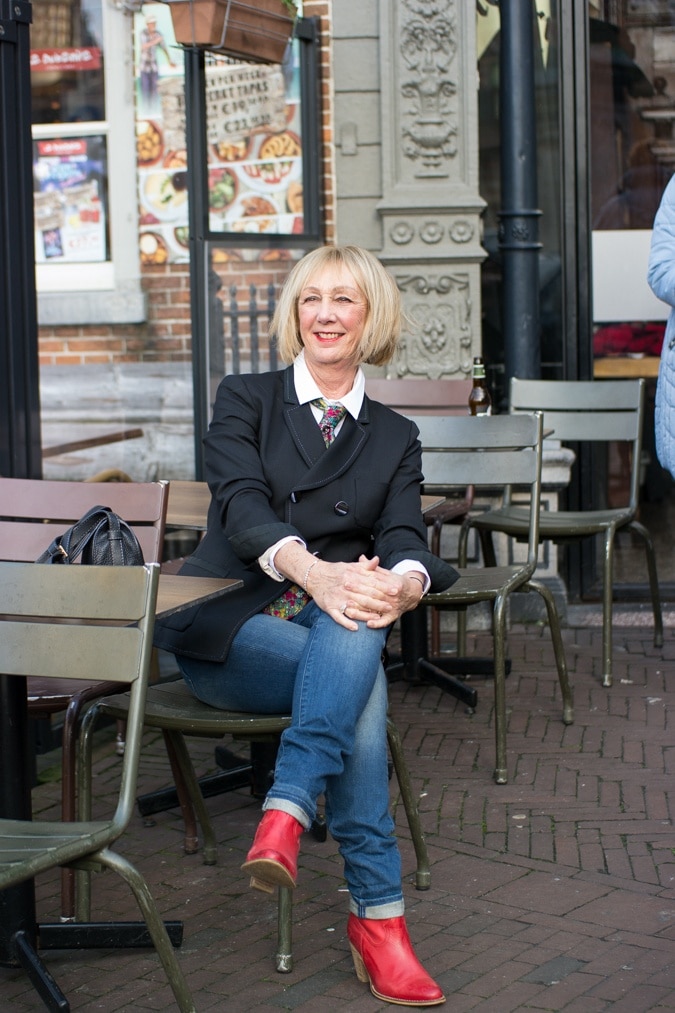 Below: Misja is really good at styling, as you can see below. Every time I see her I say to myself “Why don’t I ever think of that?” Some people have the gift. 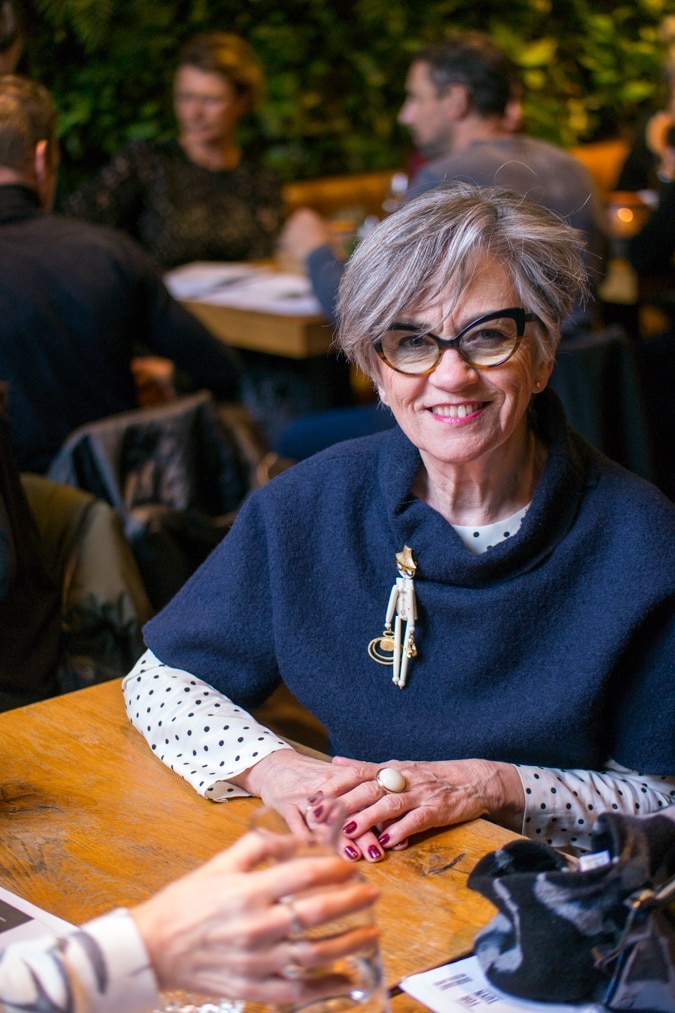 Below: Close-up of the brooch. The artist made this after Misja’s image. So good. 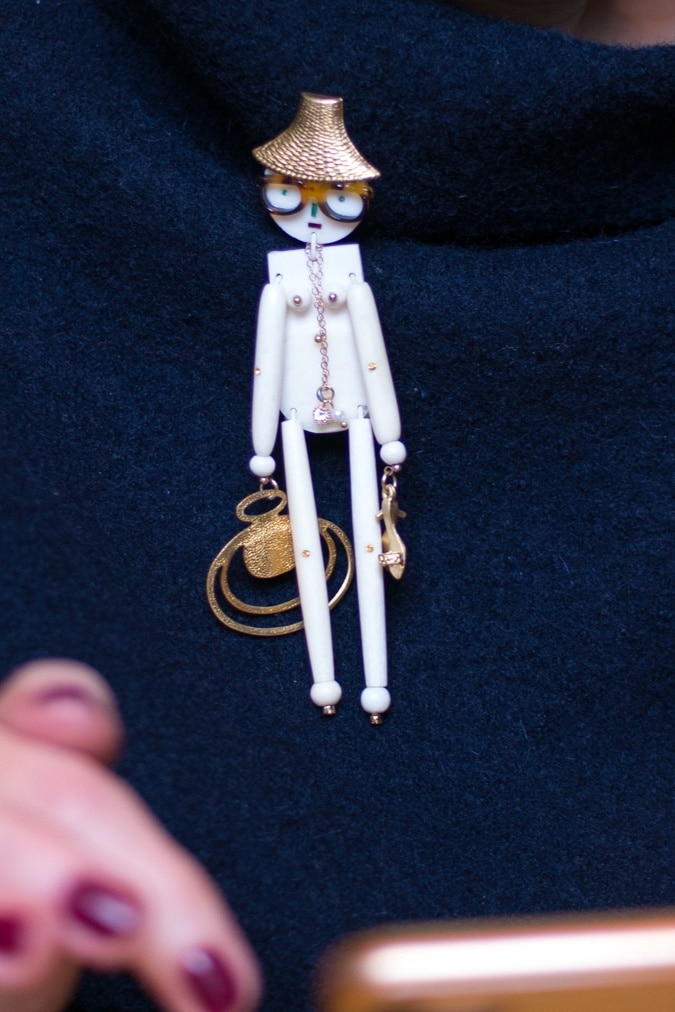 We said goodbye and I cycled back home with a stop at my hairdresser to have my fringe trimmed.

Below: This is the street, called Zeilstraat, from the big market square to my hairdresser. 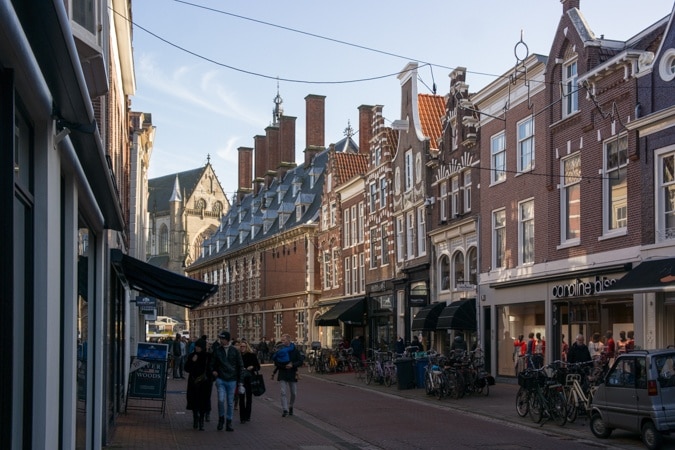 Below: The beautiful old building where my hairdresser (Rob Peetoom) resides. 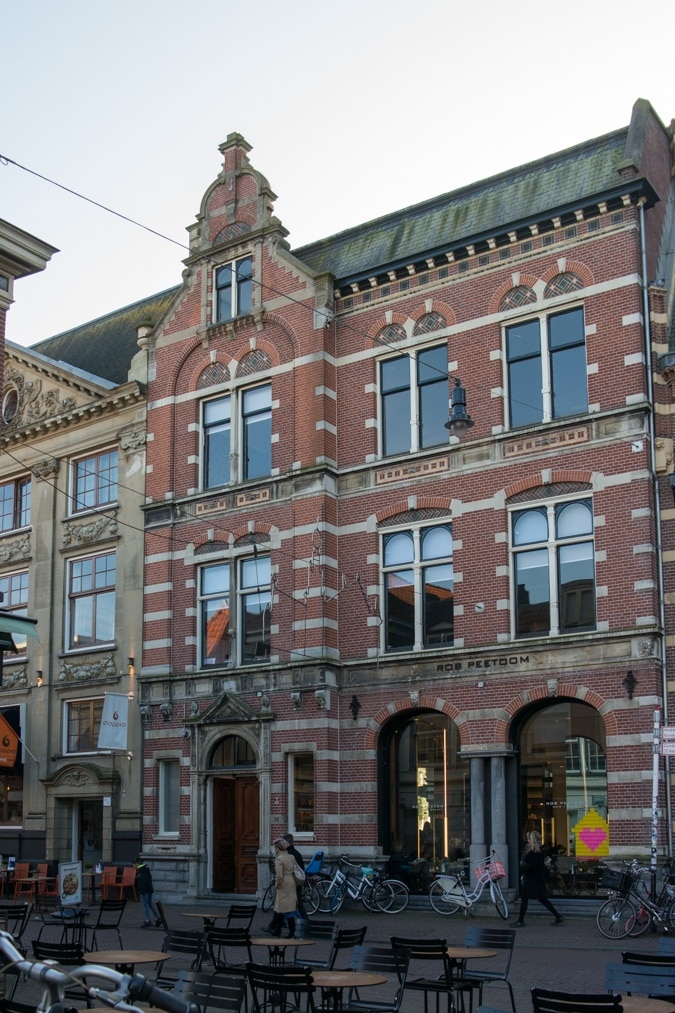 Below: Indoors where there is no wind… Ruby, my hairdresser’s daughter, was kind enough to take a few photos with my hair done nicely. 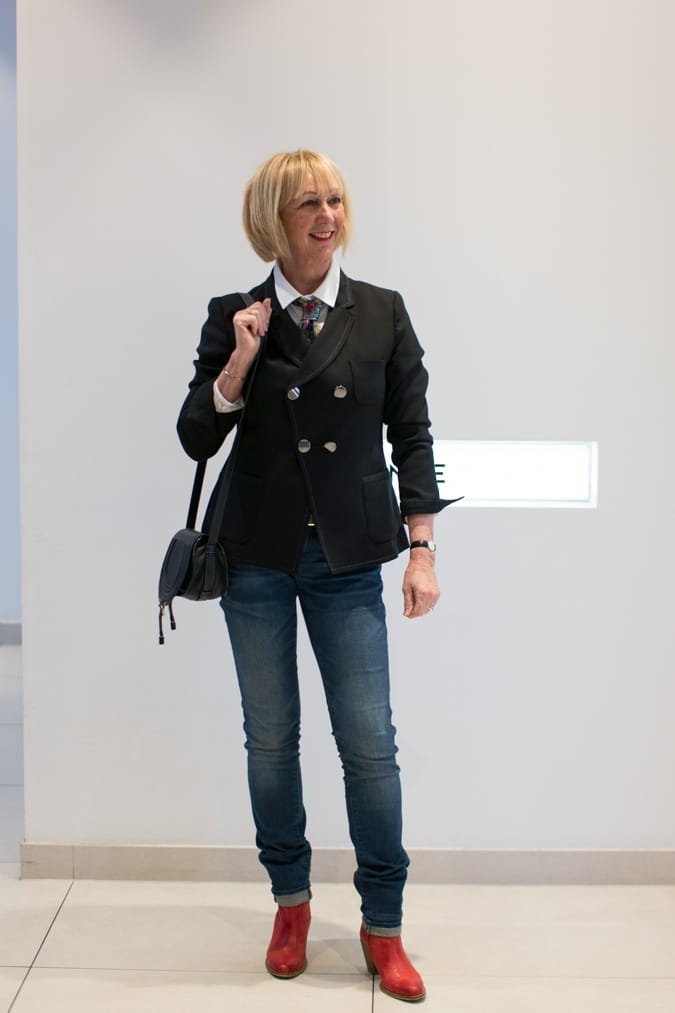 Below: And she took a few on the stairs. This one I like best. 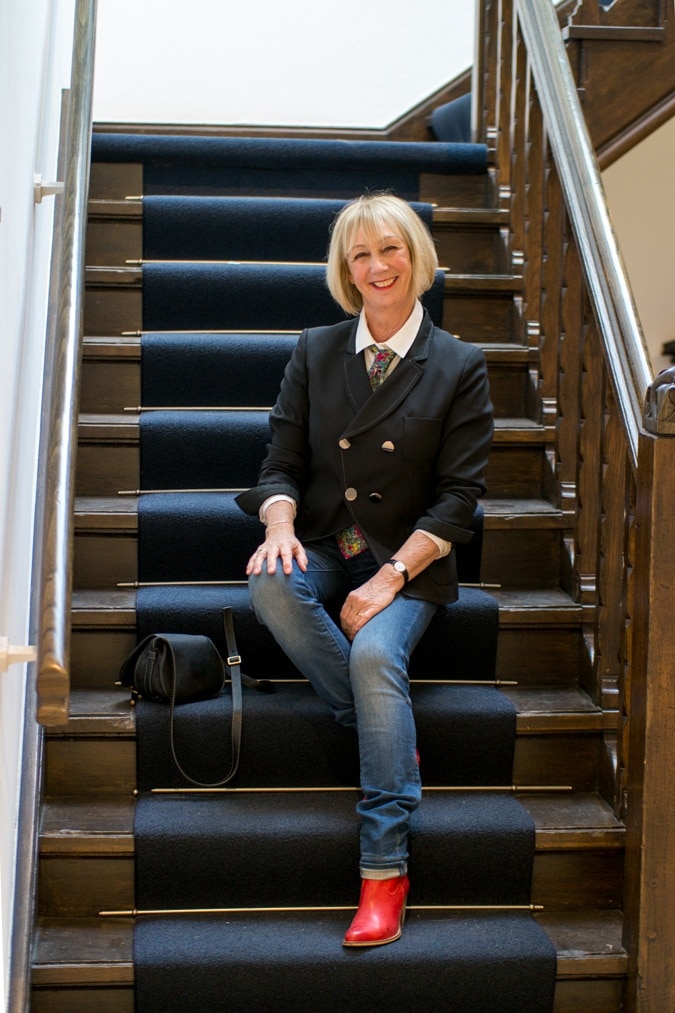 Below: Took some more photos of lovely Haarlem around the Zeilstraat. The first photo below is the view from the hairdresser. 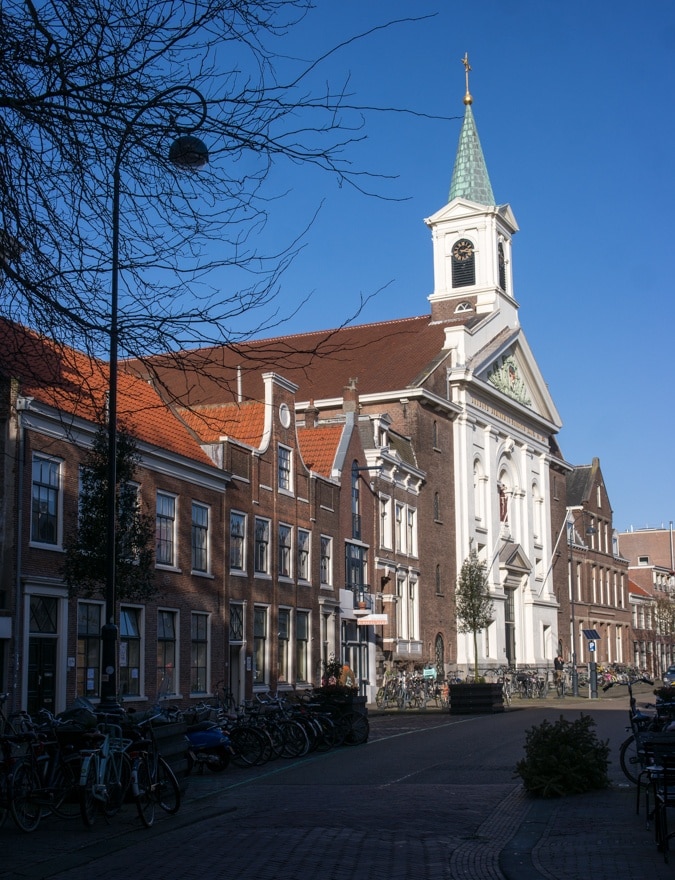 Below: And this is the building next door which used to be the post office. As you can see there are bicycles everywhere. It is like a plague in the Netherlands, but they are so handy with the short distances we have to cover. 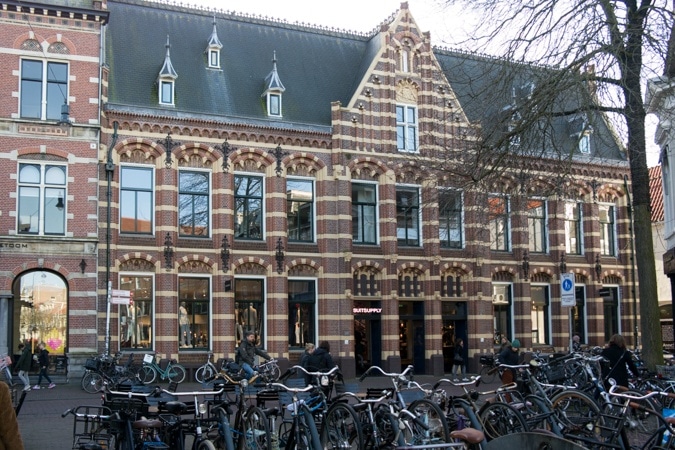 Below: Going home on my bike I spotted the yellow house on the corner. 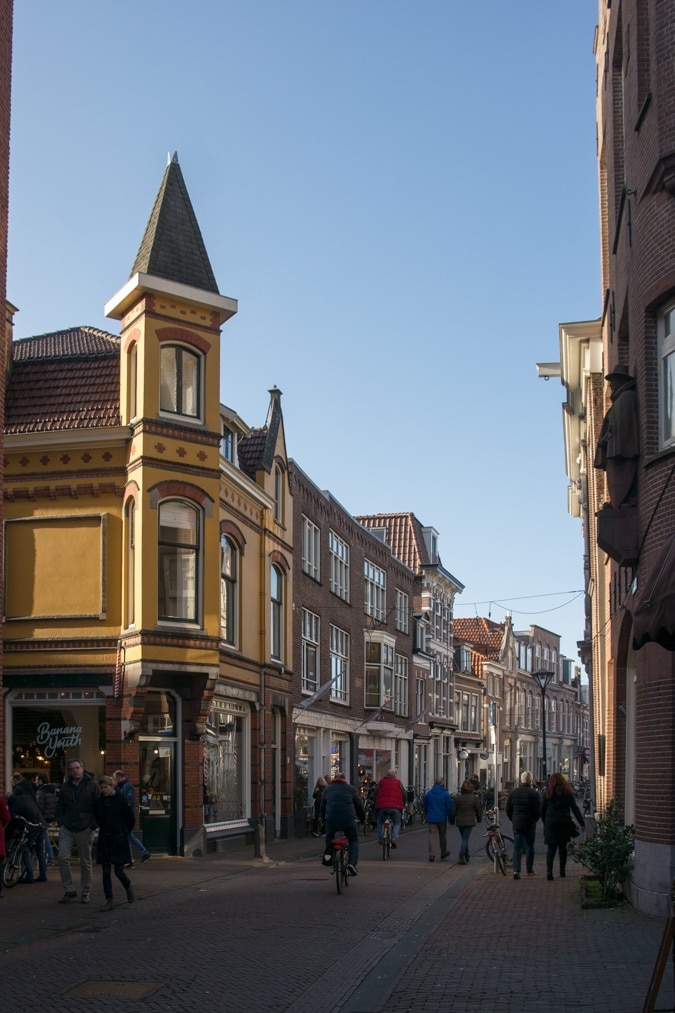 Below: Popped by my flower shop Jasmijn Bloembinders, to pick up the flowers I had bought earlier that day (such a nice shop)… 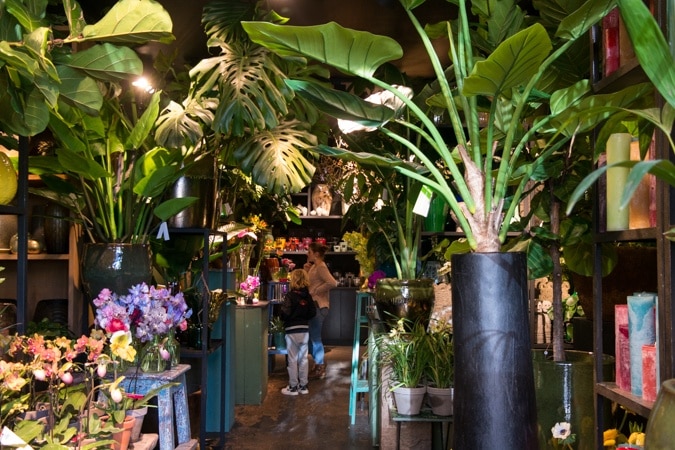 Below: …and fell in love with these little green vases; bought one. 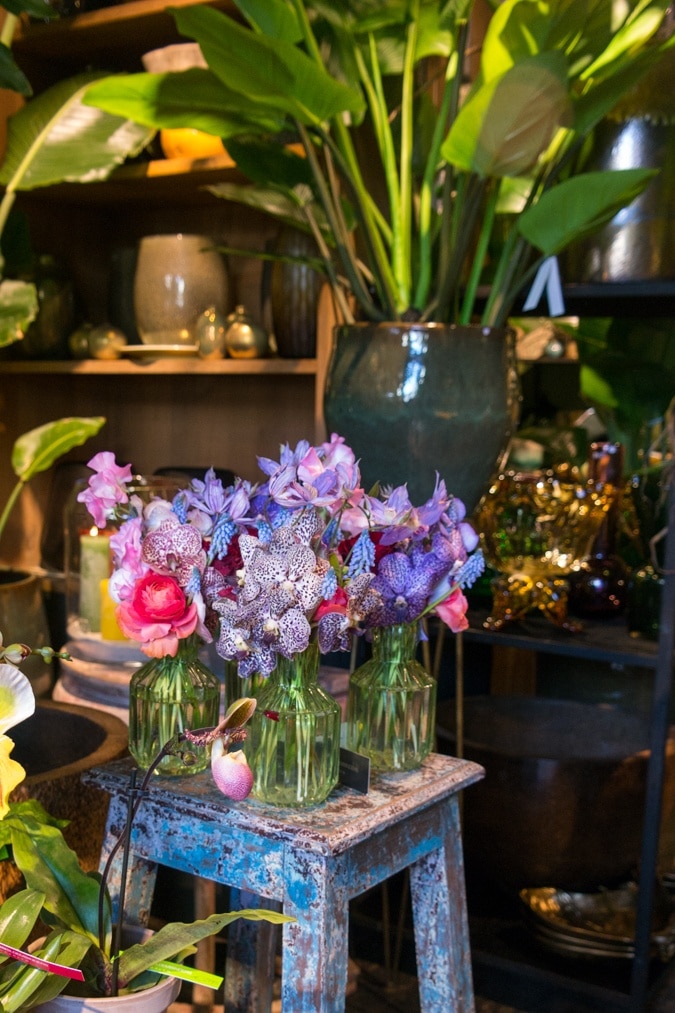 Below: This is Brie, one of the sales assistants. The flower arrangements in the little green vases above are her handiwork. 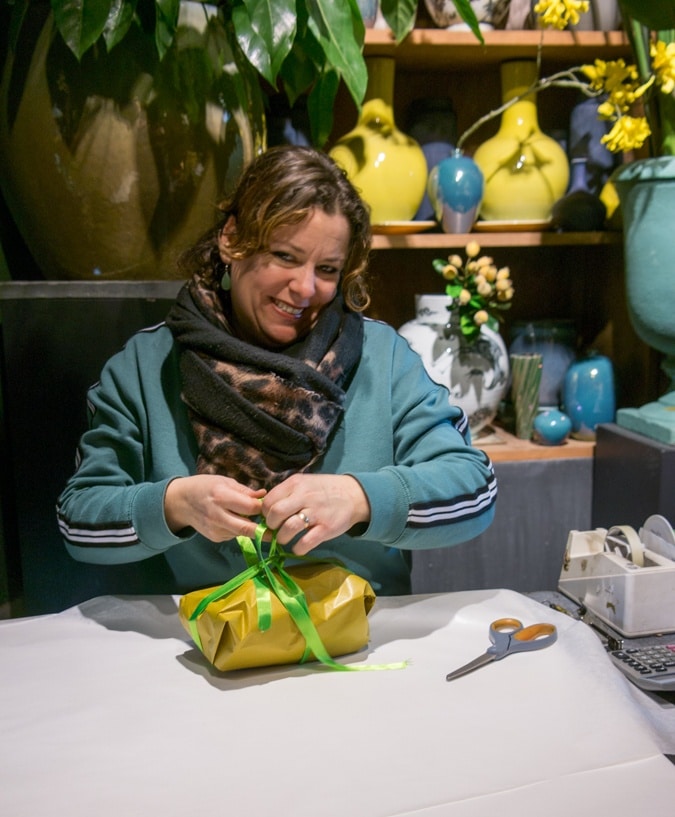 Below: Another rather spectacular building. 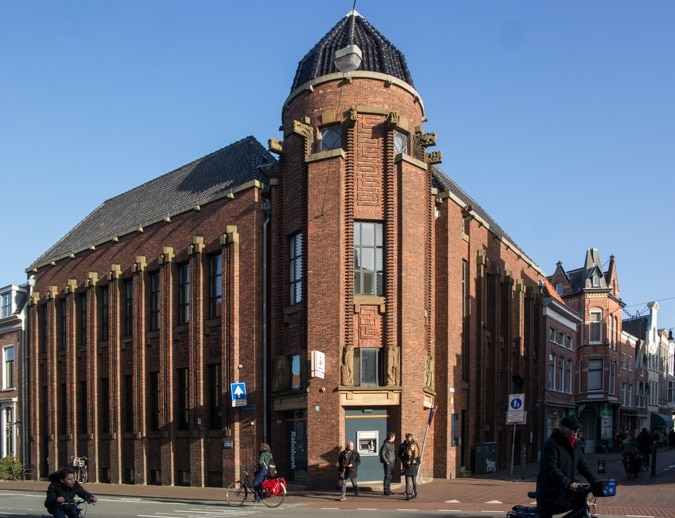 Below: Passing this restaurant I took a photo of the impressive chandelier. The people on the right (total strangers) were waving at me haha. 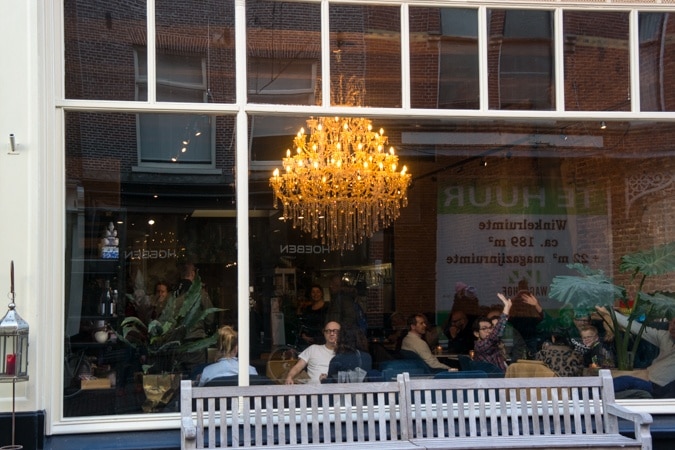 Below: Next door was the entrance with more chandeliers hanging in the corridor. Love it. 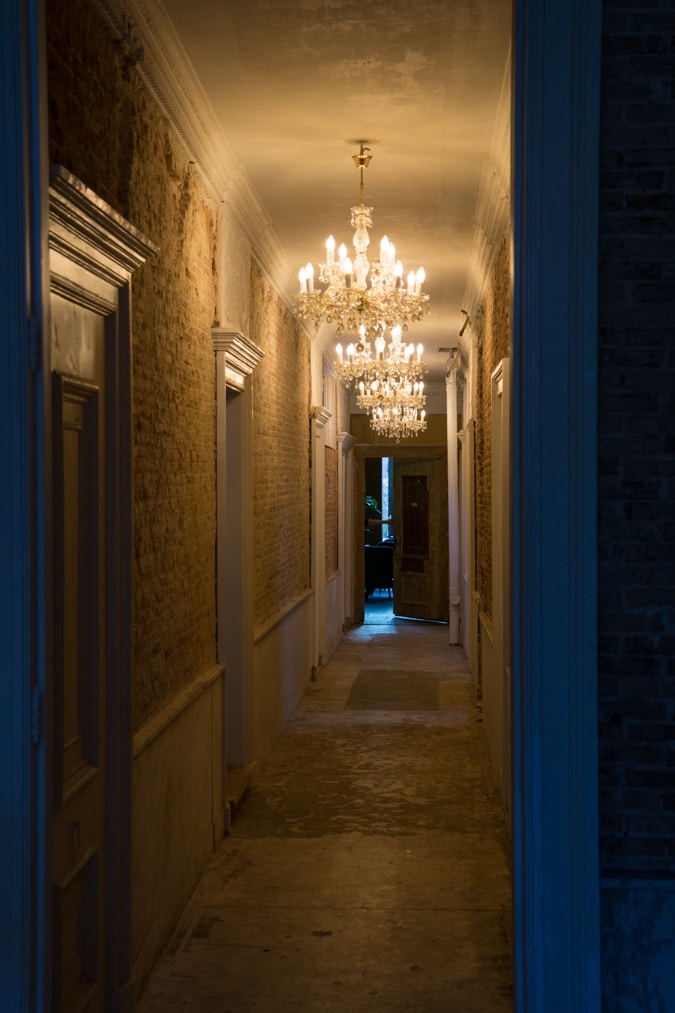 And that concludes this post. A bit of everything and lots of buildings. Hope I didn’t bore you.

Saturday: cancelled my appointment with the hairdresser as my hair was looking sooo good and the cut wasn’t due for another week. Only my hairdresser (Inge) was going on holiday. I rescheduled and Jaimy is going to cut it. She is good with my hair too. Did all sorts of shopping in town and in the afternoon had a photoshoot with Loes. Picked up my repaired sewing machine from the store.

Sunday: it was raining cats and dogs so I stayed in all day. Sewed loops on my legging so I can wear it with a belt and don’t have to hoist it up every 5 seconds. A disadvantage of having no hips. 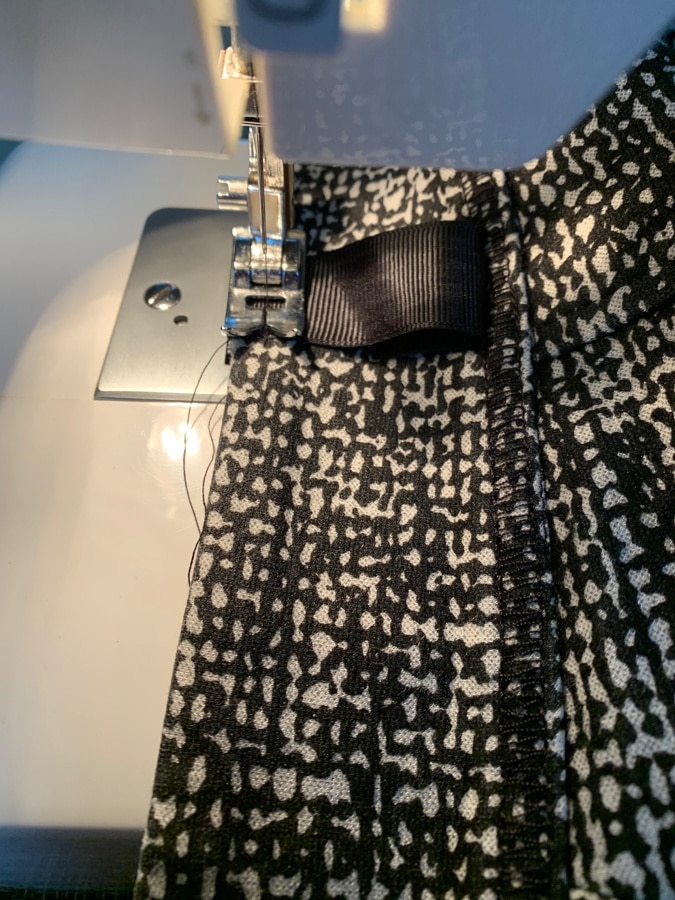 Monday: normal day at work, nothing interesting to tell.

Tuesday: again a normal day at work. I am doing the odd jobs now. Like proofreading, making an add, small stuff. And I explained a few little tasks I used to do to a colleague who is taking over from me.

Wednesday: that was a lovely day. My friend Marjolein visited me and we hit town. She had bought me a lovely bunch of pink roses. As that was too heavy to carry around all day, I asked the owner of a store I frequent, whether she would hold them for me and I would  pick them up at the end of the day (and she did). We had a very pleasant day and Marjolein bought a nice pair of trousers. I did take a photo of her in her lovely bright purple outfit but did such a bad job of it that I do not want to show that picture.

Thursday: easy start of the day, did a bit of work and went for lunch with my friend Maurits in the adjacent restaurant. Always nice to see him. I also met 3 colleagues that day whom I hadn’t seen for about 7 years so that was fun. In the evening tried to get 98 records back into my iTunes music library and failed. Let’s see whether I have them somewhere in a back-up.

On my way out, I saw a woman sitting somewhere in the office, wearing a great outfit. I plumped down on the seat opposite her to pay her a compliment… and it was Sabine haha. Trust her to come up with such a marvellous colourful combination. 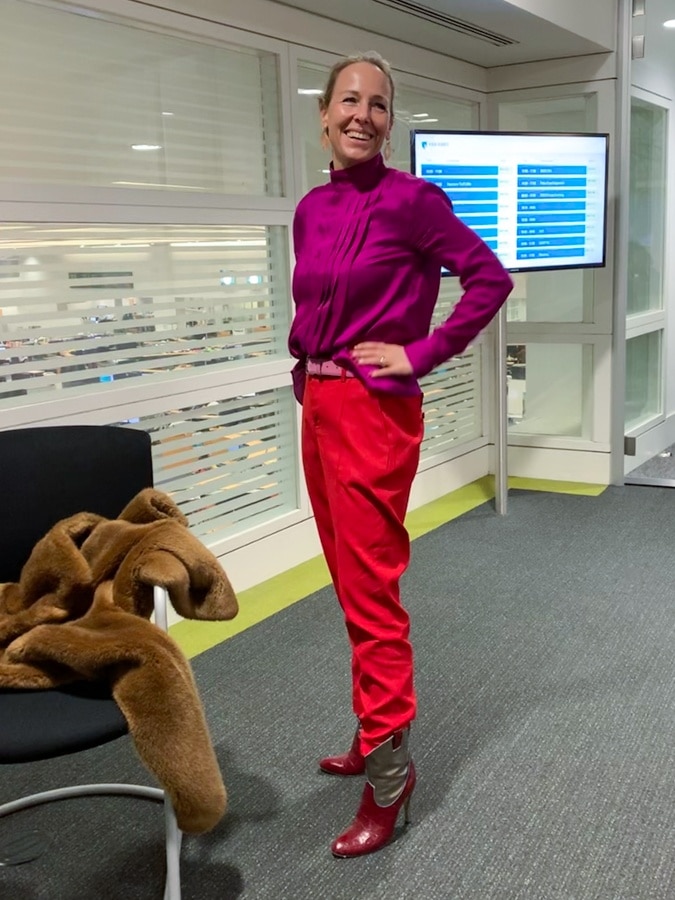 Friday: working from home in the morning. Had a lovely lunch with my ex-colleague Katrien. She is very creative and made this marvellous puffer coat herself. Needless to say, she gets compliments left and right, even from strangers. I do have colourful friends! 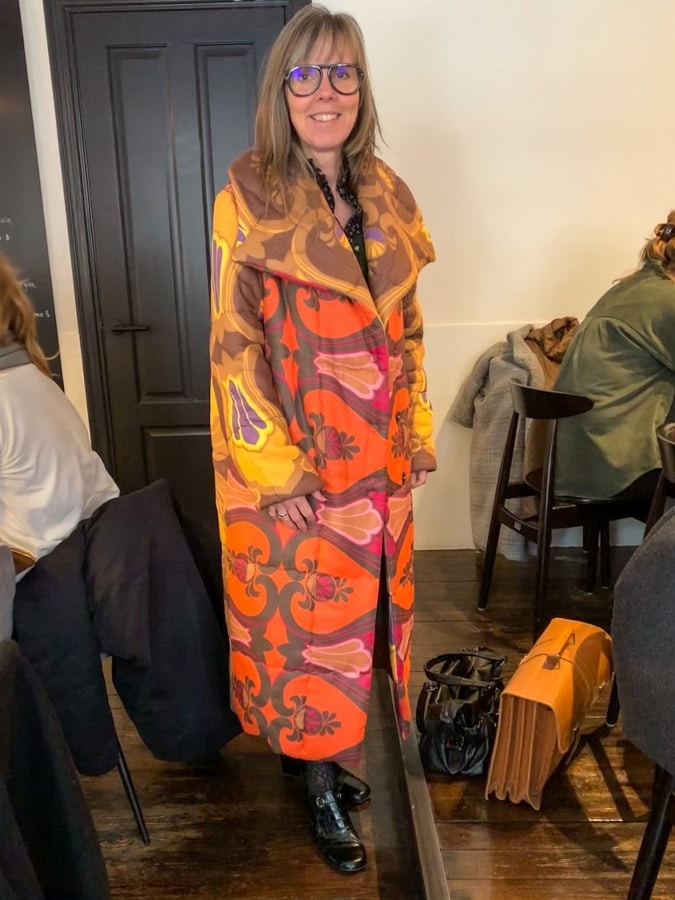 ← What if friends hold up a mirror to your reflection and you don’t like yourself? Orange snake print shirt →

← What if friends hold up a mirror to your reflection and you don’t like yourself? Orange snake print shirt →