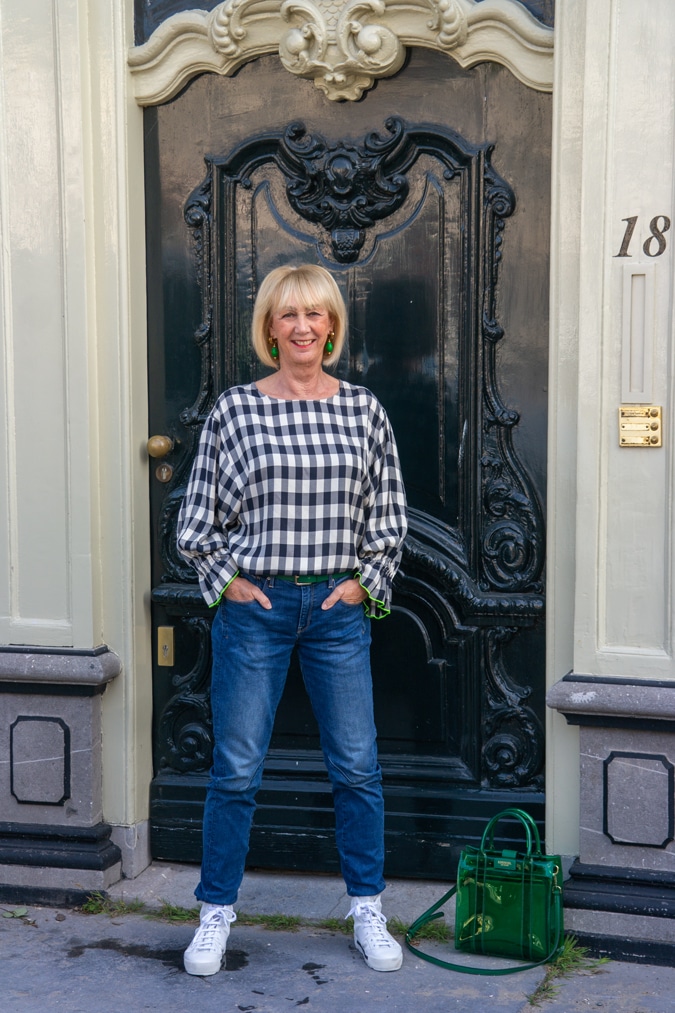 Jeans…everything goes with jeans and a black and white checked top is a no-brainer. My friend Peggy gave me this Essentiel Antwerp top as she didn’t like it on herself. She knows I am rather fond of this brand, although this season’s collection isn’t my style. I already had a black and white checked top but when I took it out, I saw it was torn at the back of a sleeve. It is beyond repair, so Peggy’s gift came at the right time.

Loyal readers know that I virtually live in jeans. Whether they are skinny, boyfriend, straight or flared, they all suit me (…she said modestly…LOL). In this post I am wearing my G-Star Raw boyfriend jeans in a dark wash, without cuffs for a change. The black and white called for some colour near my face, ergo…the beautiful green earrings by Lara Design. You saw them last week for the first time. They are in heavy rotation.

My friend Jeanne took all the photos. Prepare yourself for a lot of photos in this post. Jeanne is my friend since we sat next to each other in class when we were 16 and she lives in a small town called Maassluis. It is not a village, she corrected me, as they were granted city rights. I looked up “city rights” and came across an interesting piece of information on Wikikids.

“City rights were granted to a city by a landlord, from the 13th century onwards. These rights gave the cities privileges such as the right to build a wall to defend themselves better and to hold a market, which yielded a lot of money. The city rights in the Netherlands ultimately became the downfall of the nobility. Because the cities became so rich and powerful they no longer needed a lord to protect them. So they didn’t pay the lord anymore (or far less). If he didn’t like it, they could defend themselves against an attack from him. As a result the counts and dukes received a lot less money and had far less power.” (Can you tell this is kids’ language? Or is that the way I write anyway? LOL.) You can read more about it here.
Maassluis‘ city rights were granted much later (1814).

Below: To give you an idea of beautiful Maassluis, here are a few photos. It is a very old city with a lot of water (canals) and bridges. 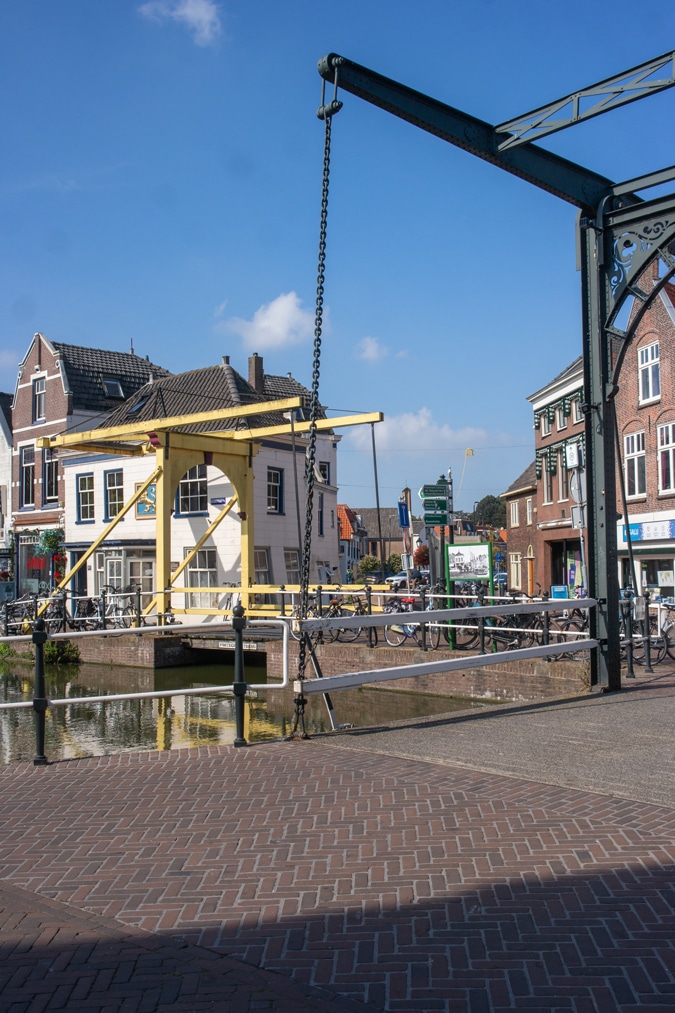 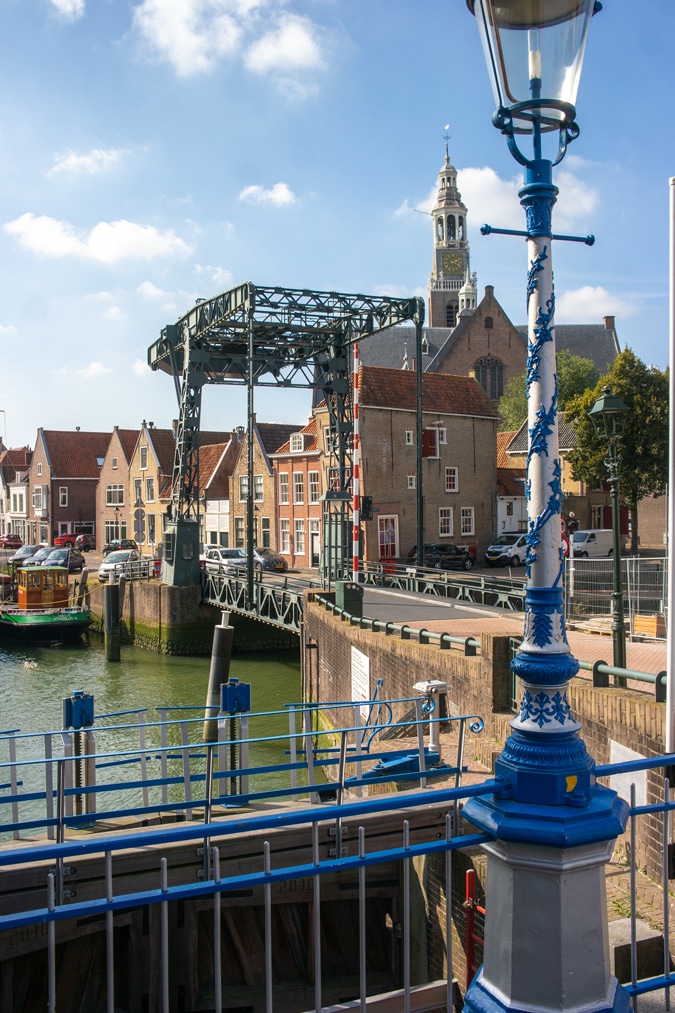 Below: The first photo of this post was taken in front of this grand house. There was a guy standing in front of the house, ruining the photo, but my photoshop skills are improving. I got rid of him…heh heh. 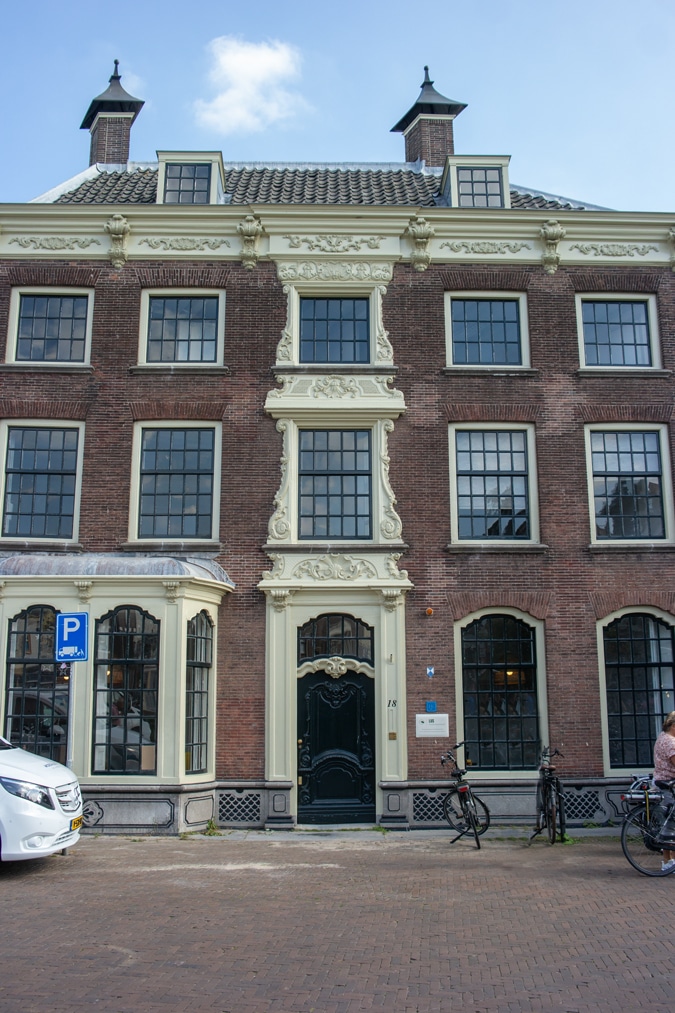 Below: I love the wonky lamppost. There aren’t any trees on the right side of the canal, which I think looks horrible, but I don’t know the reasons for that decision. 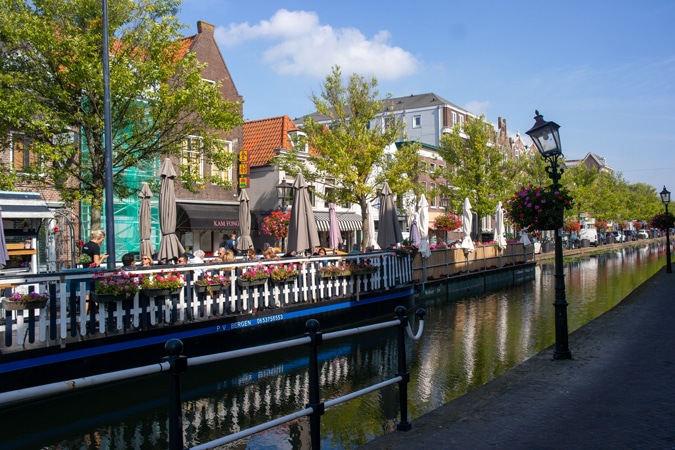 Below: Now, let me introduce you to Jeanne. It is almost impossible to take a good picture of her as her face moves constantly, but I succeeded in the end. She is a kind and helpful person who laughs a lot. 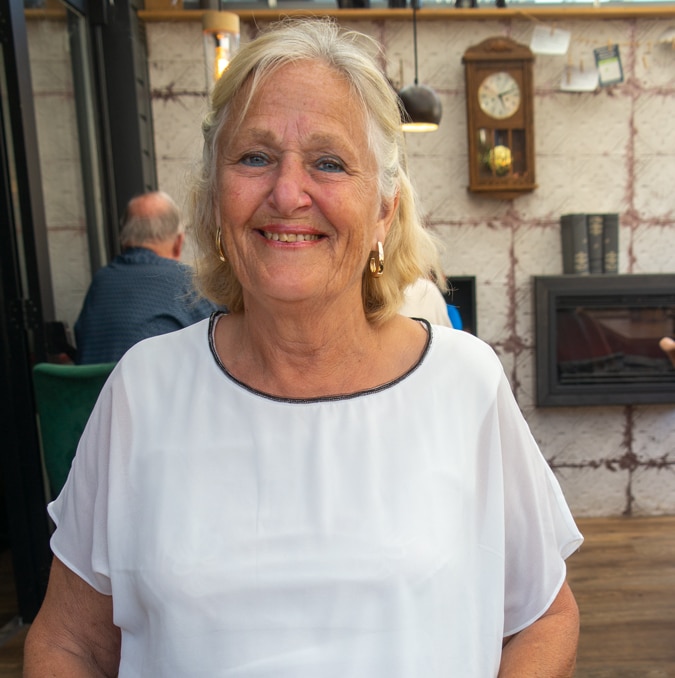 Below: We started taking photos near her house. I am wearing my awesome lime duster coat. I love that thing and don’t wear it enough. 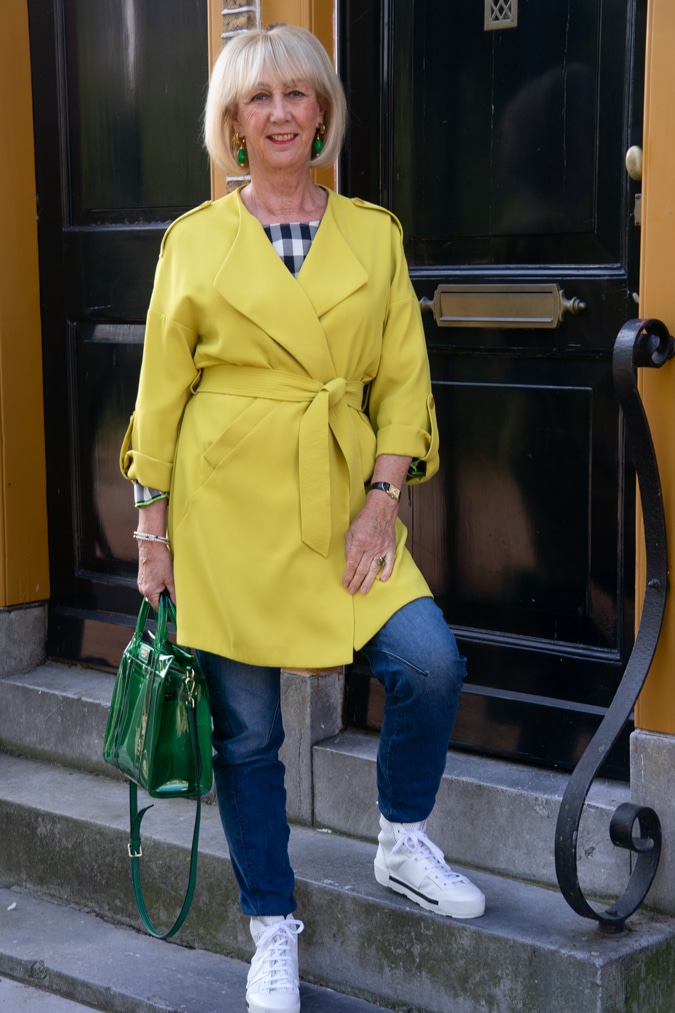 Below: As we were standing in front of a neighbouring house, the neighbour opened his door to see what was going on. Good-looking neighbour. 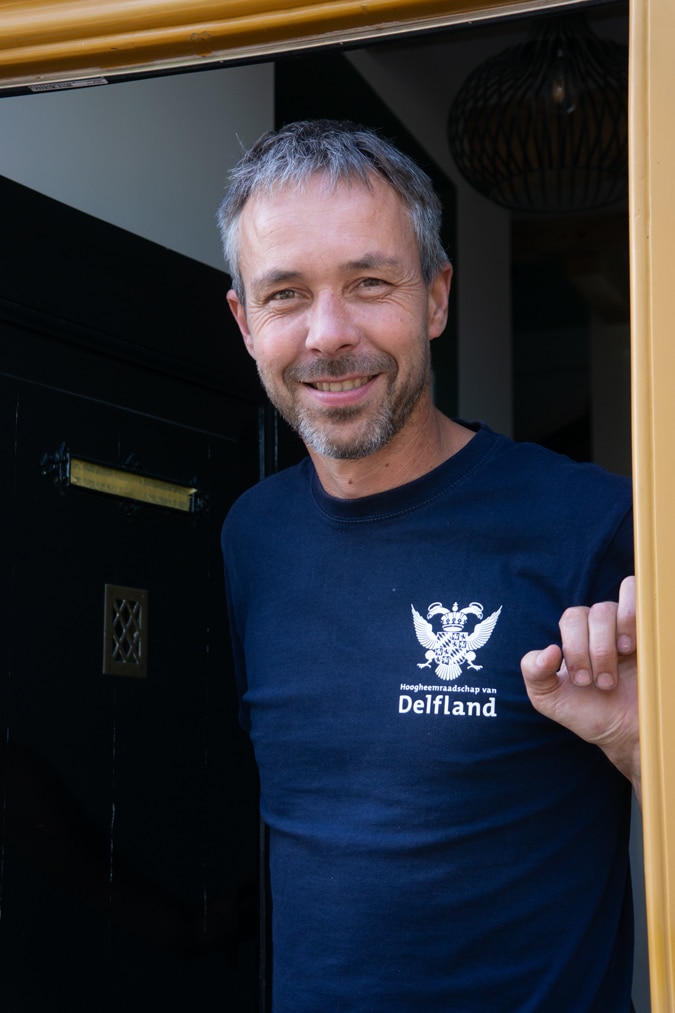 Below: The temperature had suddenly gotten so much better, that I packed the coat in my tote. 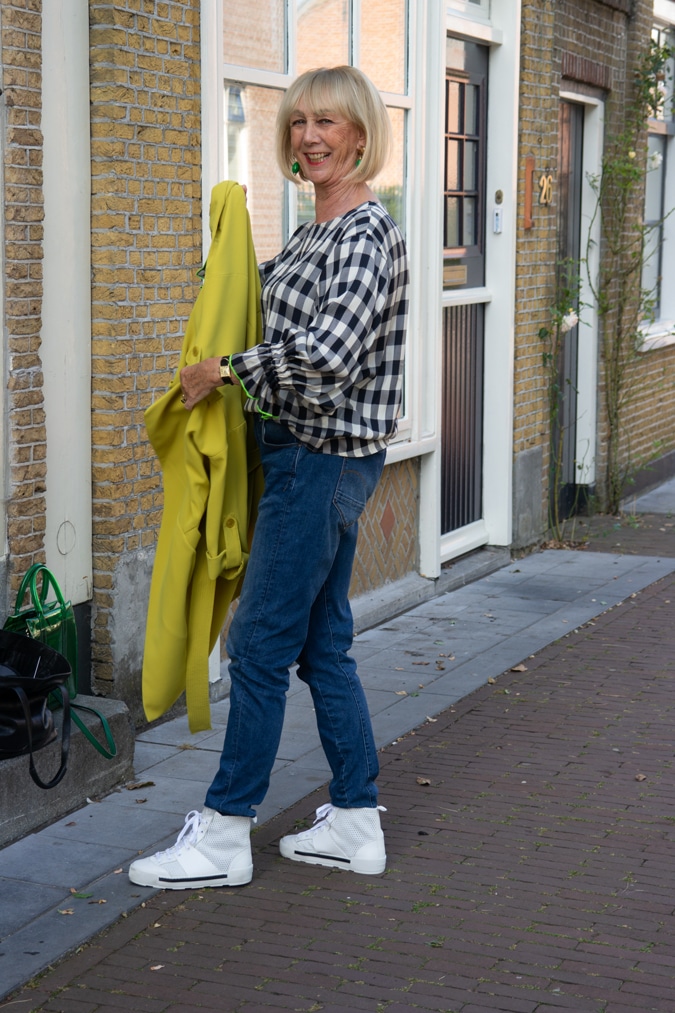 Below: I always schlepp this big tote with me. It holds the camera, a mirror, brush, comb and…my duster coat. Walking across the street (which is also a dike) to the stairs leading to the centre. 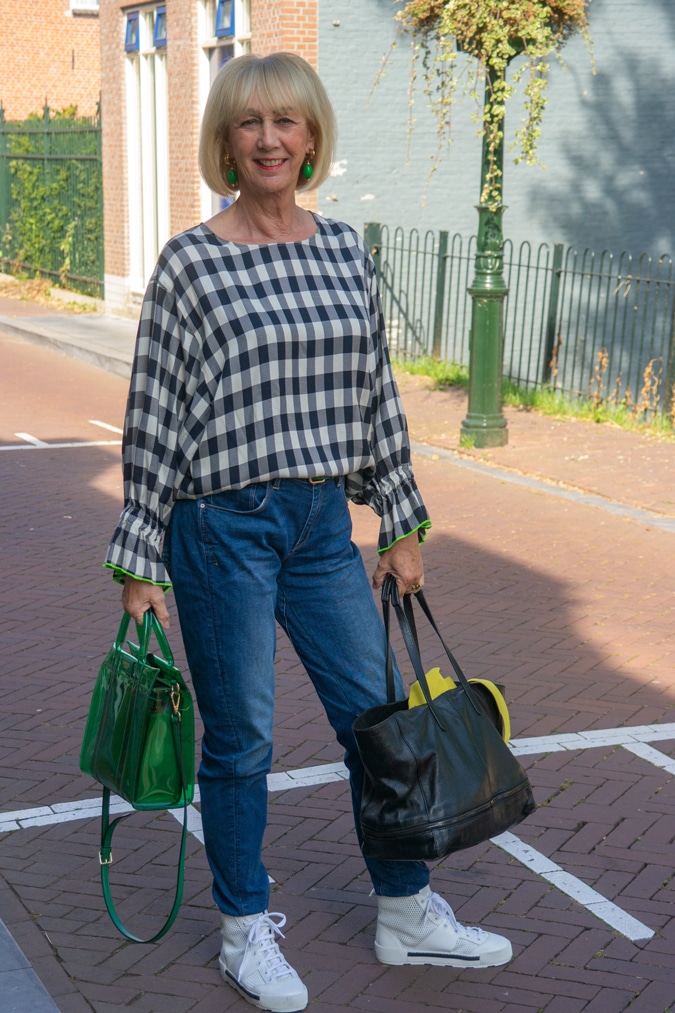 Maassluis is a city with a dike. Jeanne lives in a house with several levels. The ground floor is the level of the dike and her garden and basement are down a level.

Below: Across the dike there are stairs going down to the centre. Jeanne turned out to be a very good photographer. I hope you like all the green elements I tied in together: the edging on the sleeves, the earrings, belt and bag. 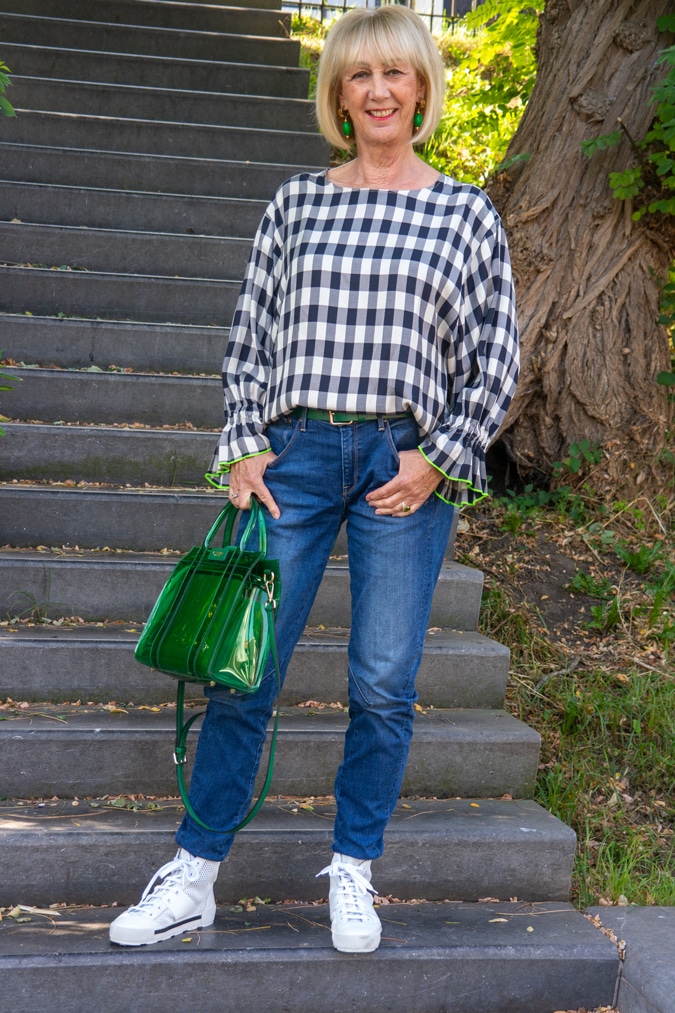 Below: The top from the back. Not that interesting but still good. 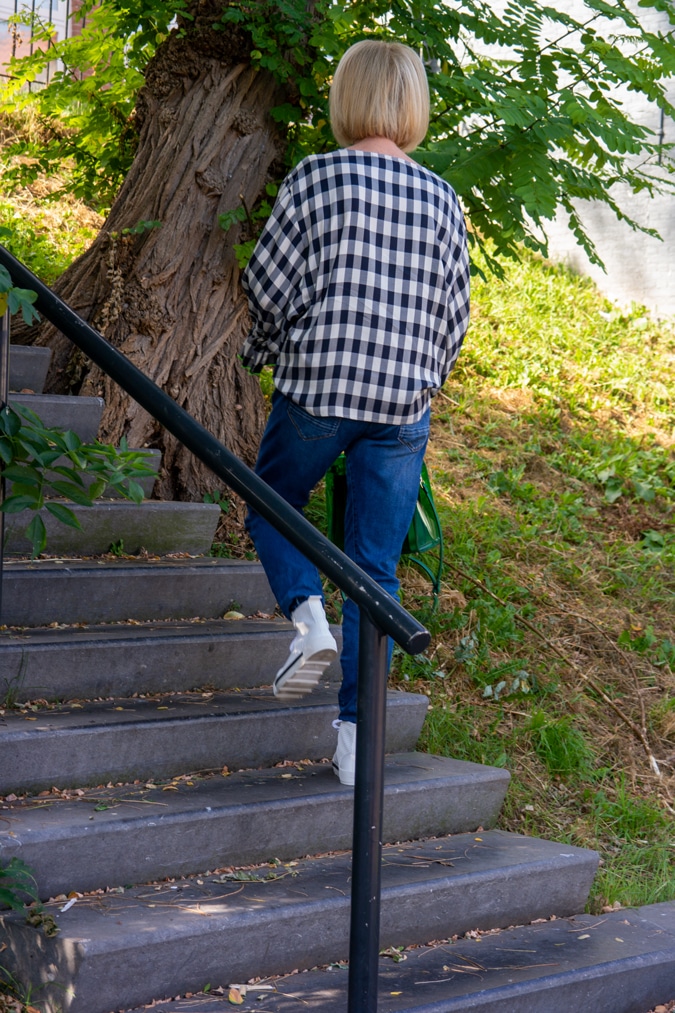 Below: This beautiful building is called Gemeenlandshuis. More about the building here. Further down you will see a photo of the back, where there is a canal (remember the chimney and tower). 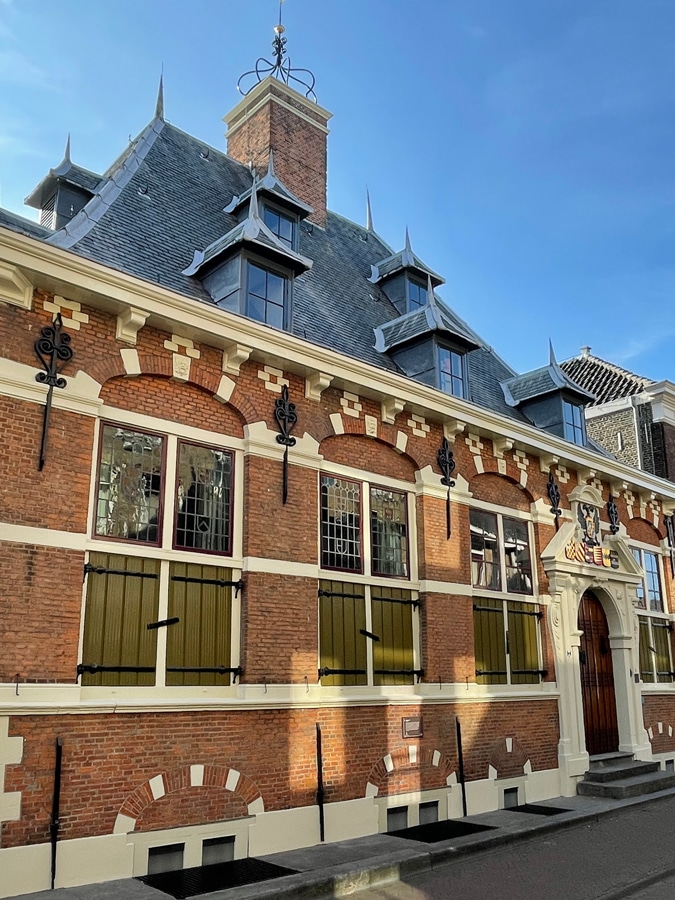 Below: Great door to sit in front of. 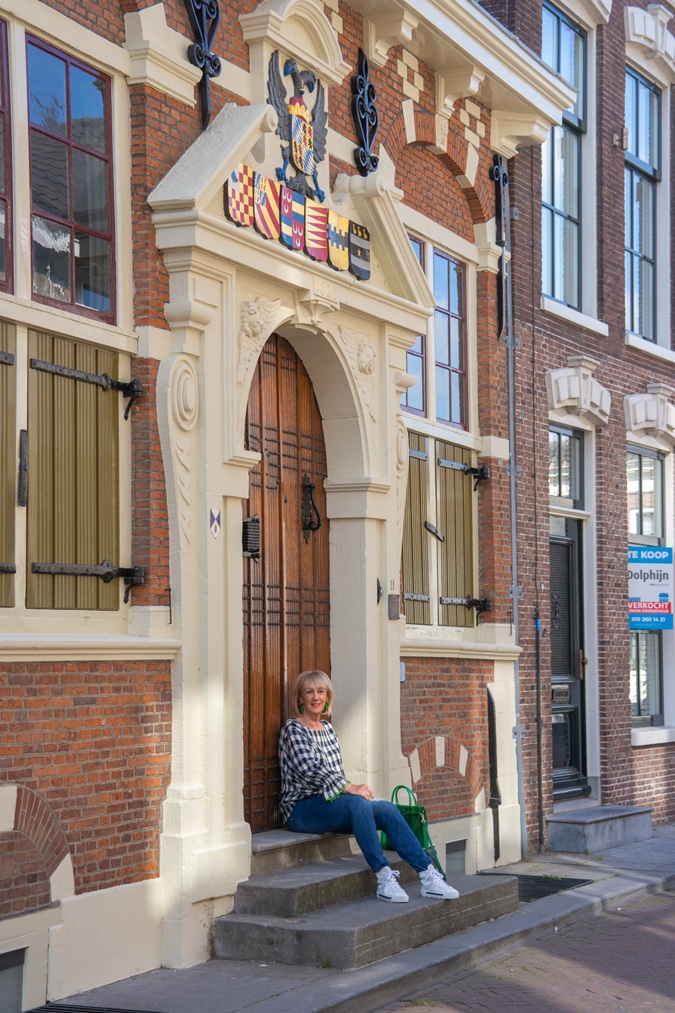 Below: Detail of the chimney and the roof windows. 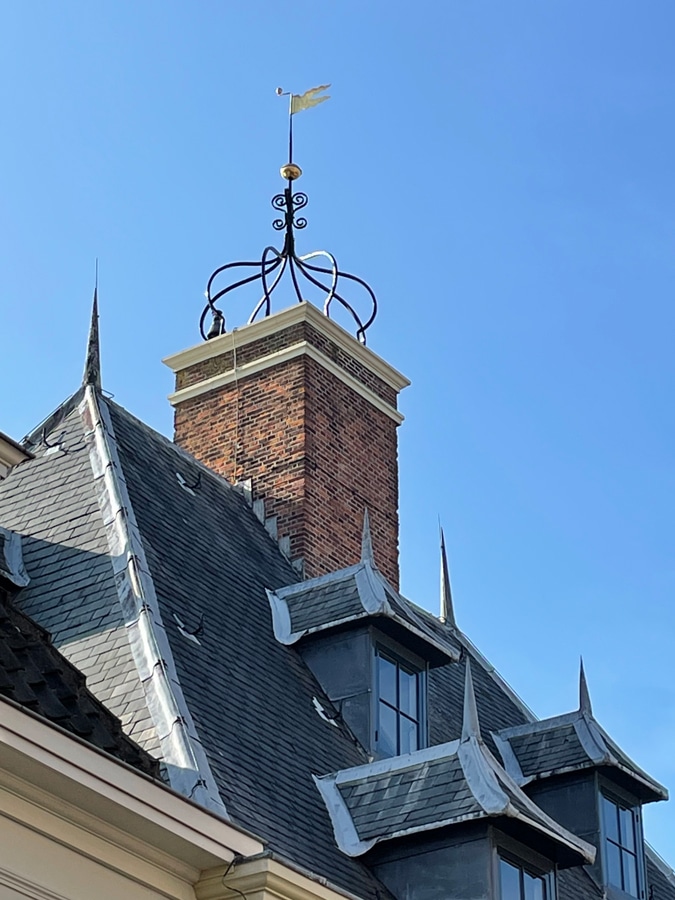 Below: Down the same street is the “Nationaal Sleepvaart Museum” (National Towage Museum), also with the canal at the back. 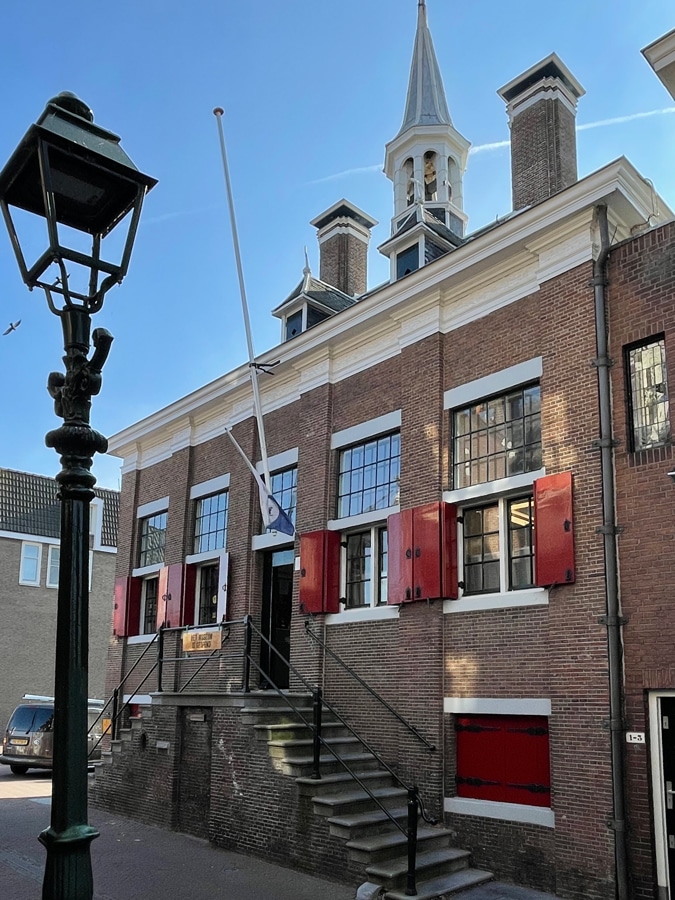 Below: Jeanne was giving me a historical tour through Maassluis and our next stop was the harbour. 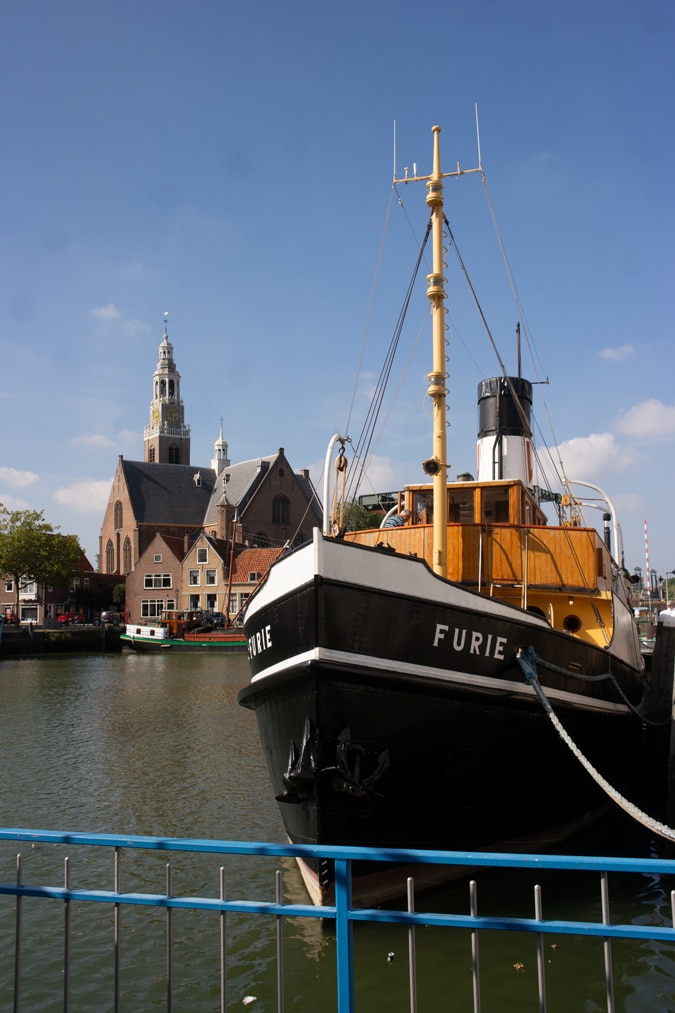 Below: Singing: “Sittin’ on the dock of a bay, watching the ships roll in“. 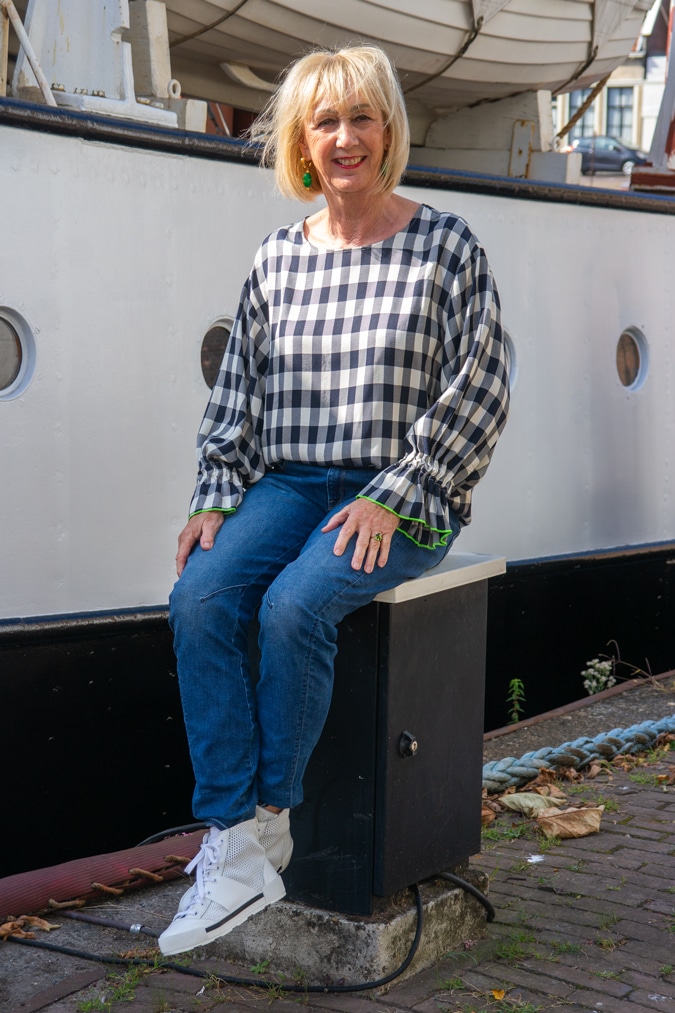 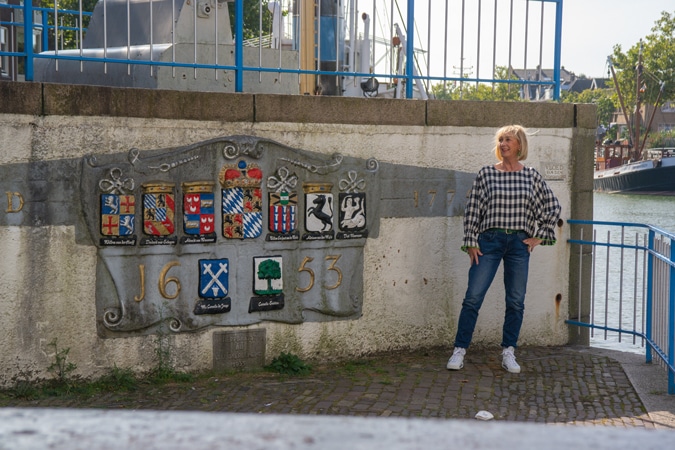 Below: We walked all the way around the harbour. Across the water are the two buildings I have shown earlier. You can recognise them at their chimneys and towers (the building in the middle and on the right). 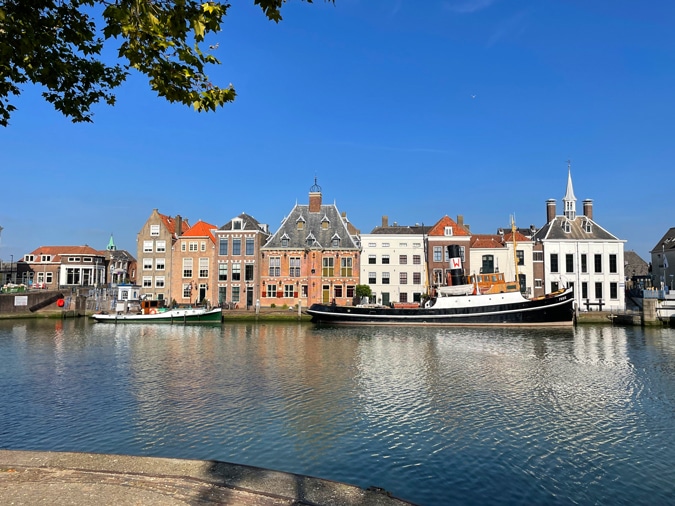 Below: Close-up of the earrings by Lara Design. 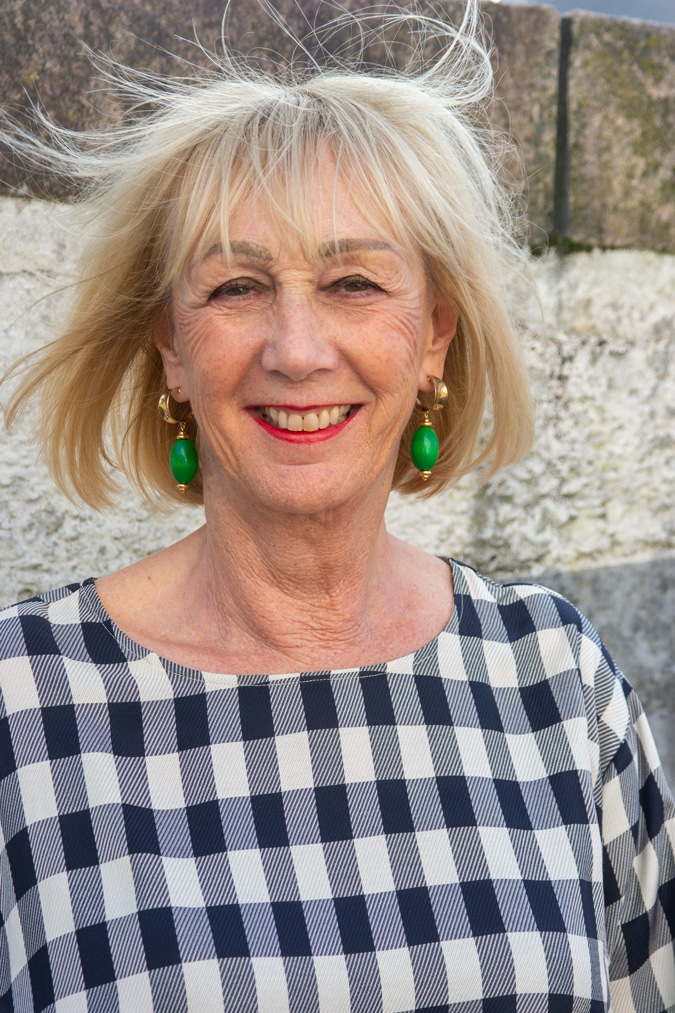 Below: Close-up of the basketball sneakers I scored in the sale at LAB Women’s Clothing (great shop). They are by Vic Matié. I have difficulty finding sneakers and boots to fit as I have flat narrow feet with a very low instep. It means I can get into any shoe or boot, but it doesn’t necessarily look good. I will just wear socks in them. 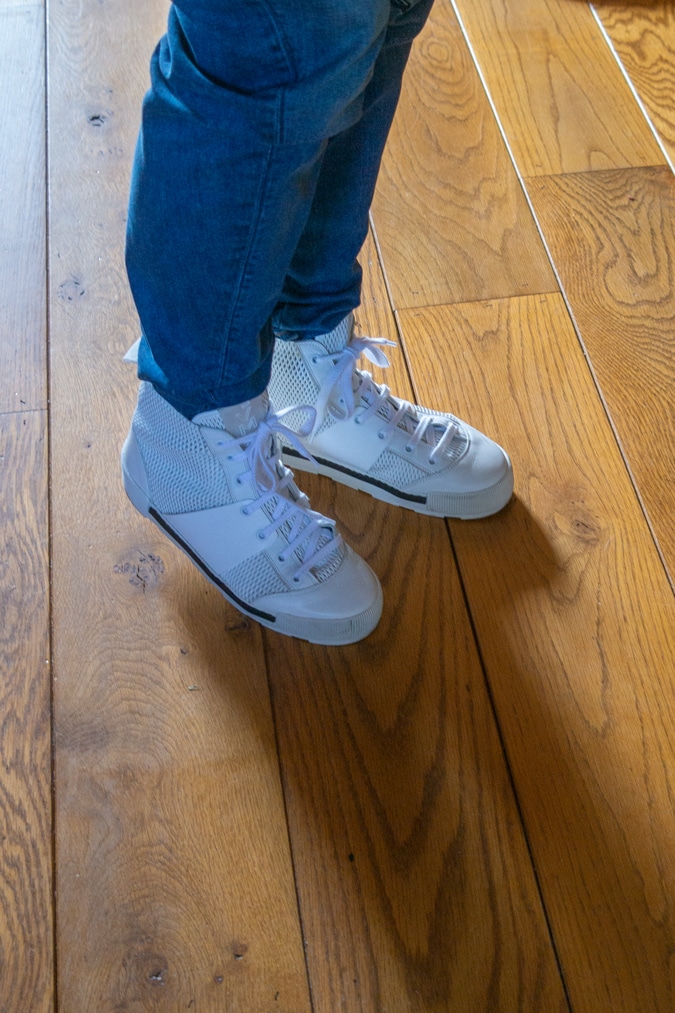 Below: As we returned at Jeanne’s home, I took this photo of her tree of life above the front door. Many houses have these ornaments. 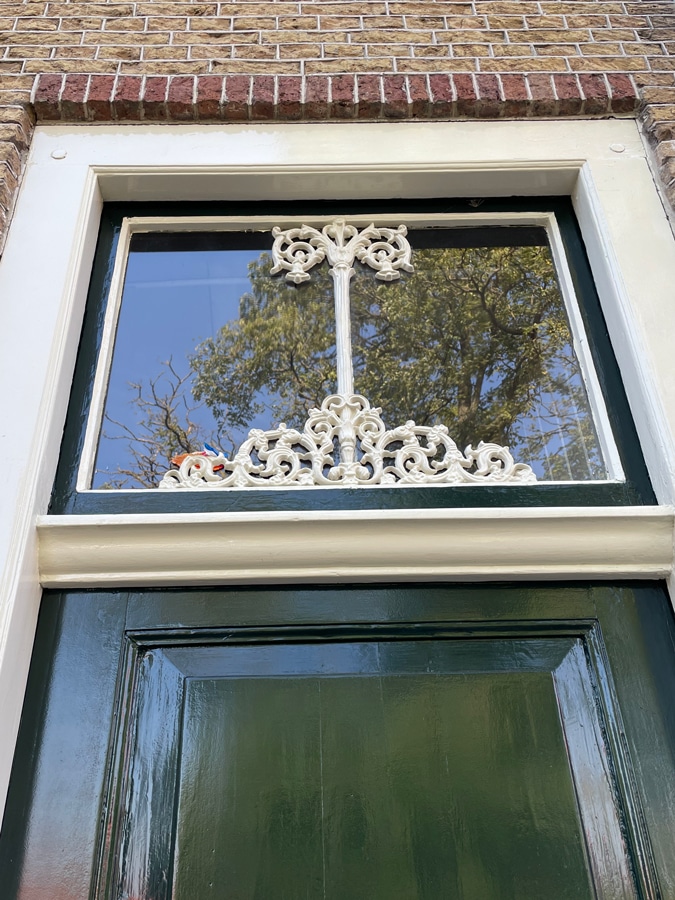 Well, this was more of a historical tale than an outfit post. Sometimes I wonder whether people want all this information. I know you lot in America think it is great, but I wonder about other readers. I think I have shifted too much and will probably ease up on it.

Saturday was my last day of health and I visited my mum. Forgot to take her photo.

Sunday, Monday and Tuesday I spent sneezing, couching and generally feeling miserable. A severe cold. Of course I did a self-test to see whether Covid reared its ugly head, but fortunately only one pink line appeared. Nevertheless, no fun.

In the meantime, my (yes, I said “my”) new-to-me Volvo got its inspection and apart from some minor things, it is a fine car. The garage is busy this week to repair the minor things (like a new battery) and on Monday the inspector will check whether everything is executed as it should be. I am a very trusting person, but with things like second-hand cars I do not take any risks. The business has a very bad reputation.

Wednesday I felt much better and normal life resumed. Marcella came round for the weekly video (hoop earrings this time). In the afternoon I went to Karlijn in her shop (kpa) to video talk to an expert who Karlijn consulted for her business.

Thursday started with a visit to the doctor. On my list were: spasms in my calves during the night, headaches and stomach pain. The latter was already solved and we agreed it probably was a little kidney stone. For my spasms she advised to drink more water during the evening, even if it meant I had to pee more. The explanation is: your body gets rid of waste and drinking water helps the waste to leave the body. That process doesn’t stop at night. OK, I am going to try that.
Headaches was the next thing on the agenda. The doctor asked my since when I was suffering from them. I told her: “33 years, just as long as I know my husband”. She replied: “Have you ever tried leaving your husband?” And we both burst out laughing. She knows Ron well and knows our relationship is solid. I thought it was very funny. Long story short: I am not allowed to take any painkillers for two months and I can only be on my smartphone or tablet twice a day. And I know she doesn’t mean two times three hours LOL. We’ll see how it goes.
So, if you are on Instagram or Facebook and you hear almost nothing from me, this is why.

In the afternoon I had a very nice lunch with a fellow Instagrammer, Janna of Timelessstyle. We agreed to meet in Amsterdam and she chose a very posh hotel to have lunch. It will take a few weeks as I have a lot of outfit photos in stock, but you will get to hear the story and see the photos in the near future.

Friday. A bright and sunny day with a little autumn chill. In the morning Kitty and I did a photoshoot in the woods with beautiful hazy light. It is going to be a good post. Coming soon.
In the afternoon Marita came for a visit. We sat in the garden and had some good laughs together. As she was leaving, Ron saw her in the street and said to me afterwards: “She looks as if she likes clothes as much as you do. She looks expensive”. I immediately messaged this to Marita and she thought it was very funny. The beauty of it is, Marita was wearing the same white shirt as I have (as seen in last week’s post). Ron never says I look expensive. I told Marita it must be her face; she has an expensive face LOL. 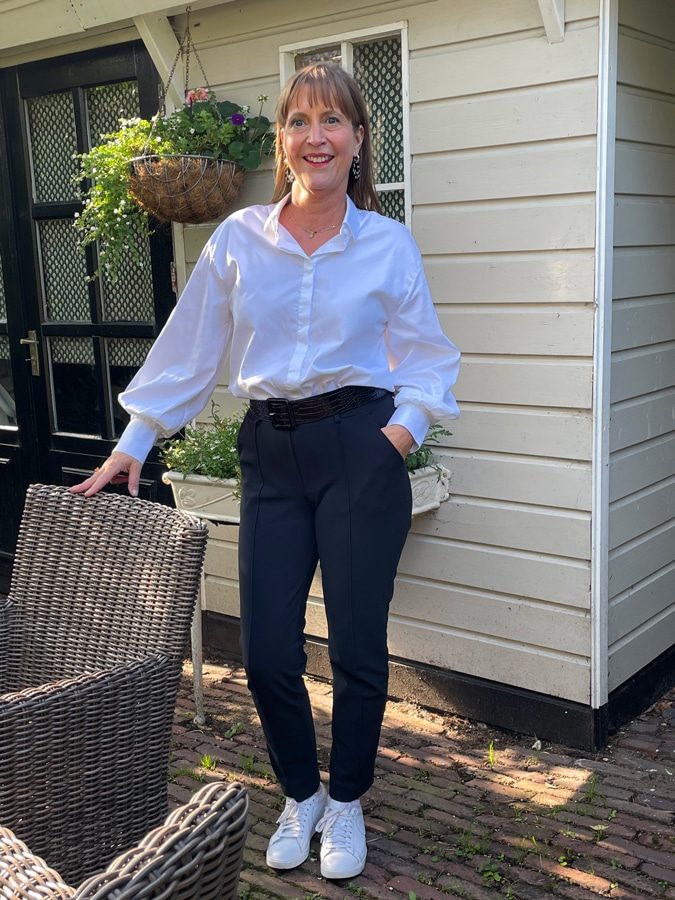 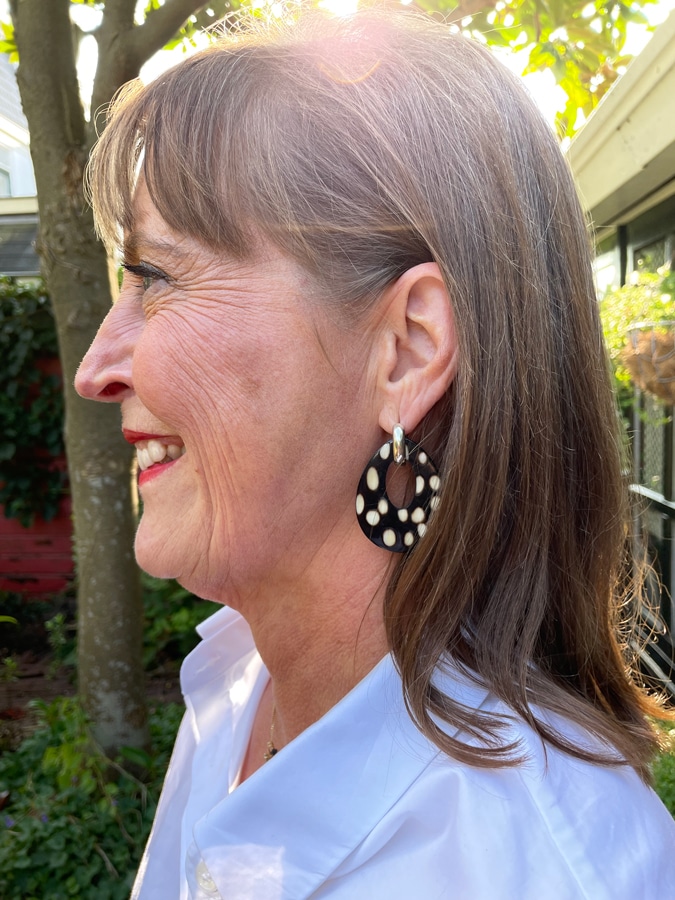 A mixed week. And on to the next one.