Shades of brown with jumper and patterned trousers 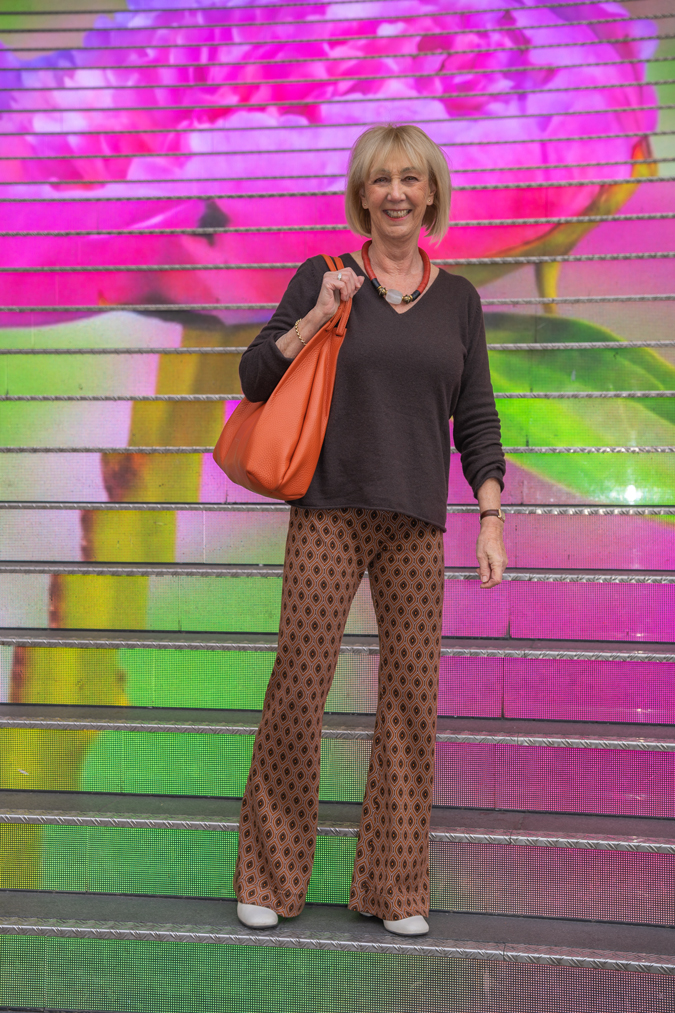 Finding locations for a photo shoot is always difficult and even more in winter. This brown jumper and patterned trousers had not been shown on the blog yet and it is a warm outfit. Just right for this cold weather. In other parts of the world it is much colder, but for us Dutch, minus 2 degrees Celsius really is cold nowadays. In the old days we had far worse temperatures plus snow. Because of climate changes, our winters aren’t that cold anymore.

Marjolein was my photographer and she had suggested to use a Christmas fair as background. It sounded like a good idea but luckily she checked it out a couple of days before our shoot and the fair was a disappointment. Then she suggested to go to the centre of The Hague and use the windows of Bijenkorf department store as background. They always have fairy-tale windows. Alas, this year they are obviously economizing. Look at the tree they have in the store (below): 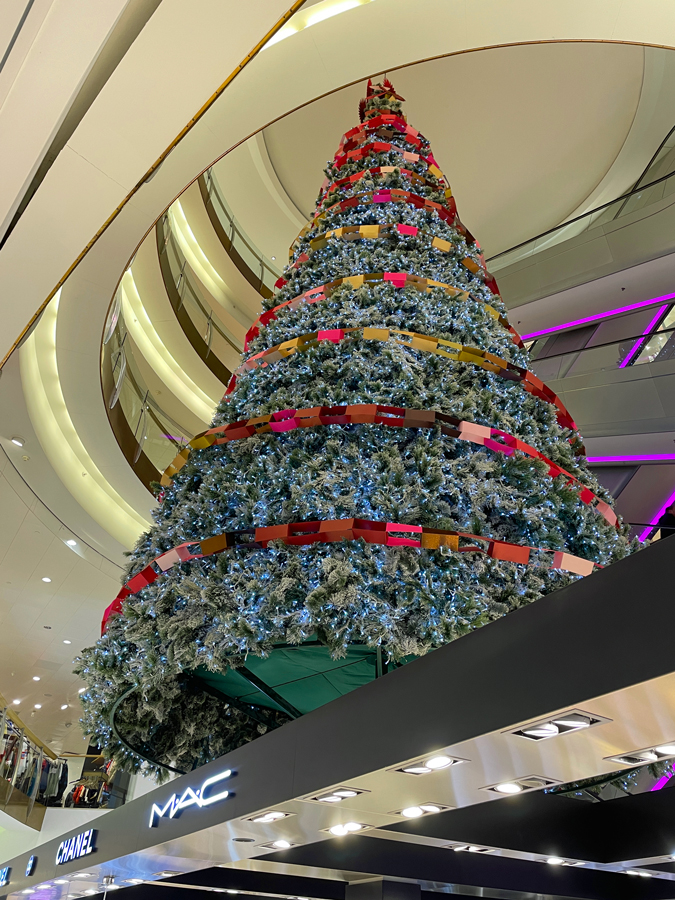 We were heavily disappointed. Their windows were just sales windows, obviously sponsored by brands.

Below: A window sponsored by the brand Sandro. I imitated the mannequin not too well, I’m afraid. 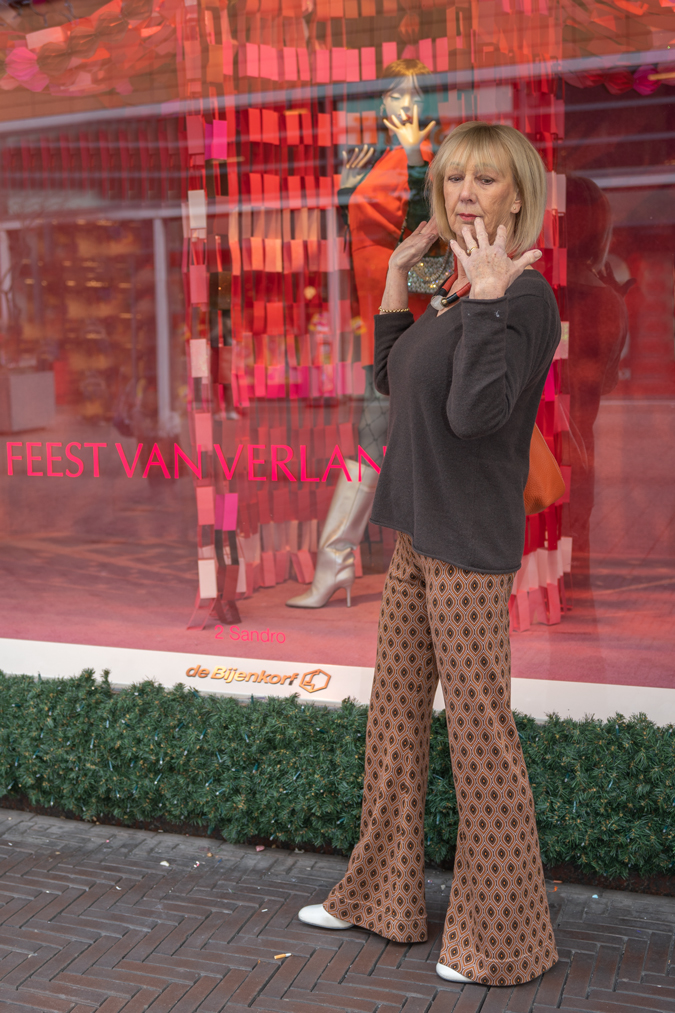 Fortunately there were fun stairs with a light show next-door.

Below: We created a little video.

Now, those stairs we can use. 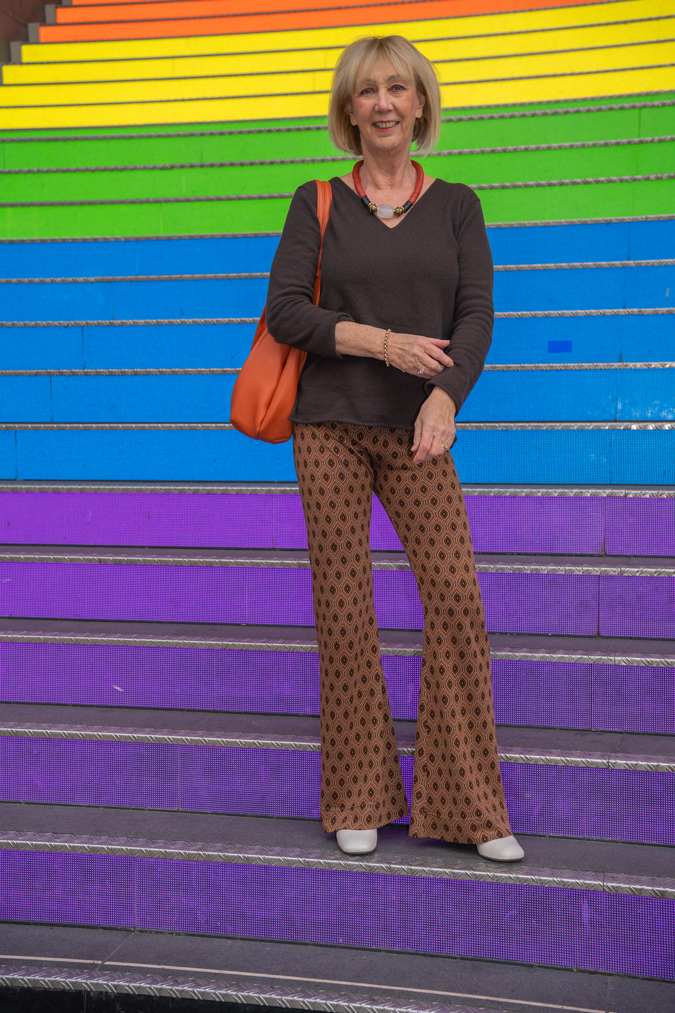 Below: Lovely background of peonies. 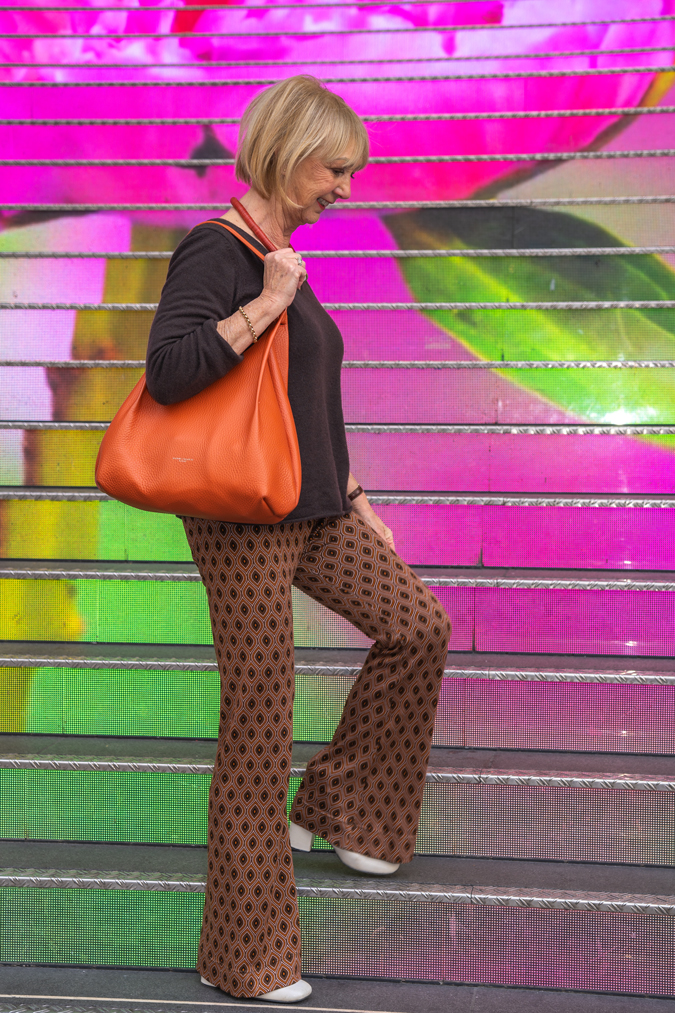 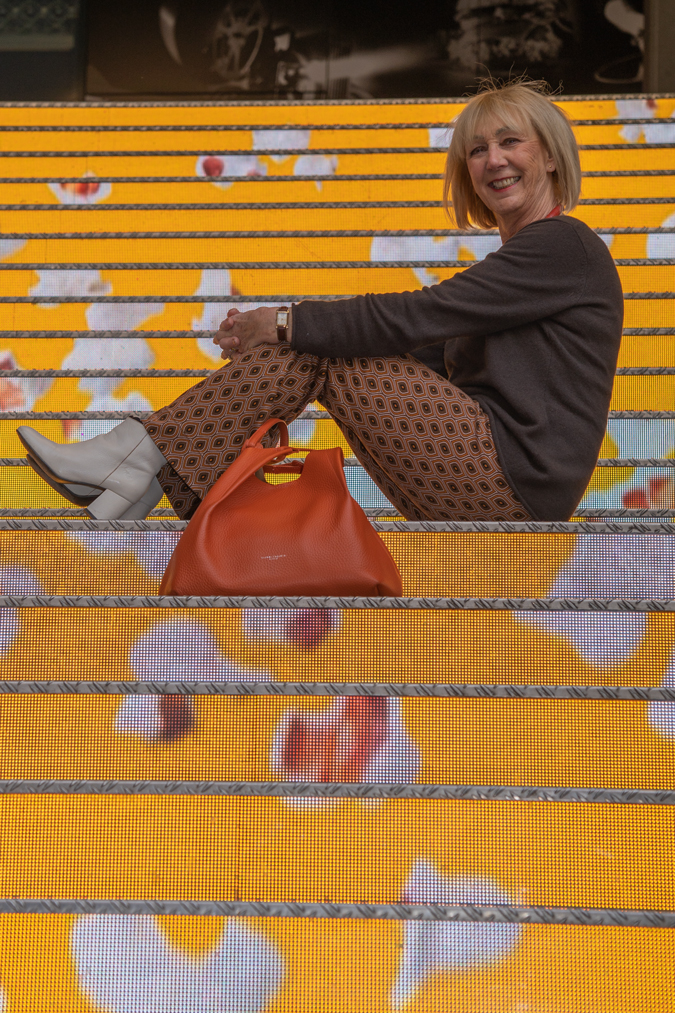 Want to see more? Probably not, but as this was the only background we had, you are going to have to. 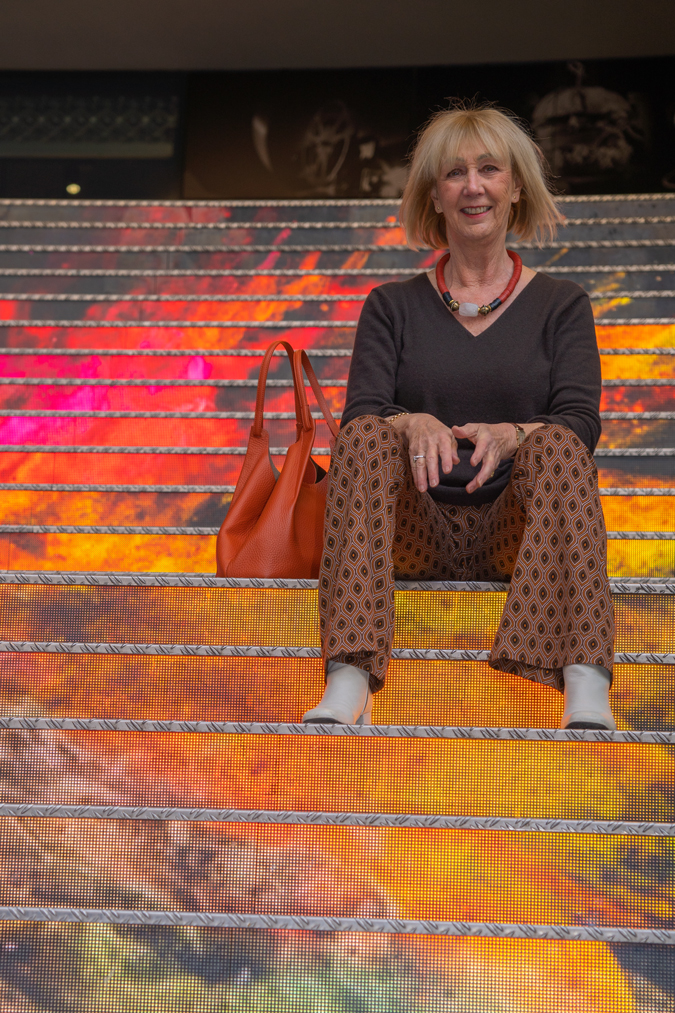 Below: You cannot escape advertising; somebody’s got to pay for it. The casino in this case.
A bit more about the outfit…the orange bag you have seen last week, the brown cashmere jumper and the patterned trousers are from one of my favourite shops in Haarlem (LAB Women’s Clothing). They have quite the slimming effect. The necklace is at least 20 years old. 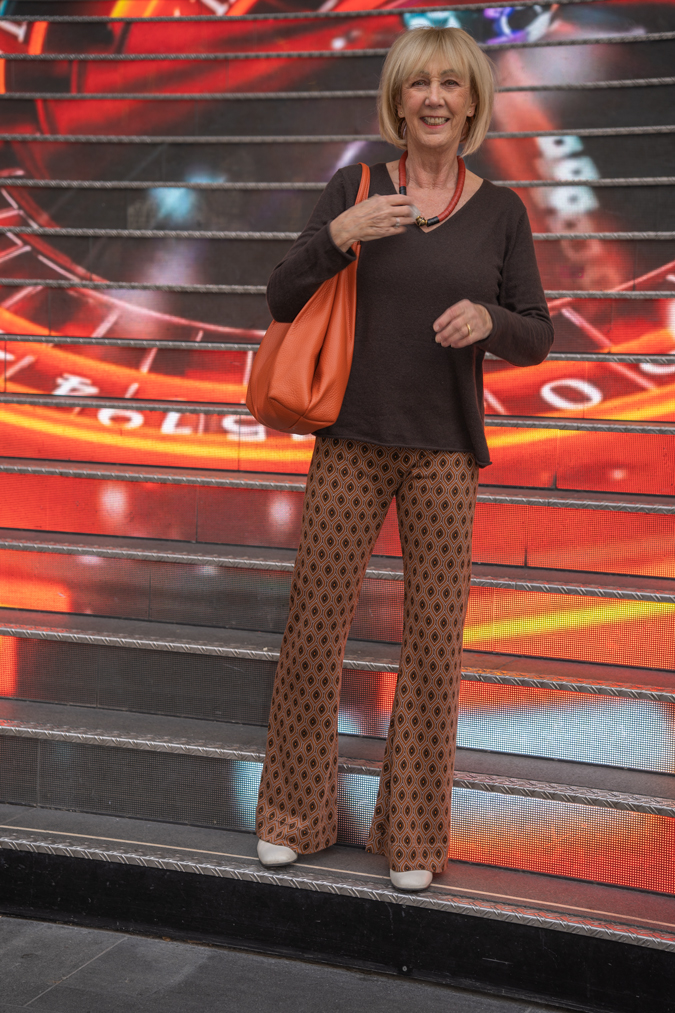 Below: We decided to go to “The Passage”. That’s better; at least here is a bit of a Christmas atmosphere. It isn’t Beverly Hills but at least the old buildings are nice. That’s me in the black coat; at last, a red carpet for me LOL. 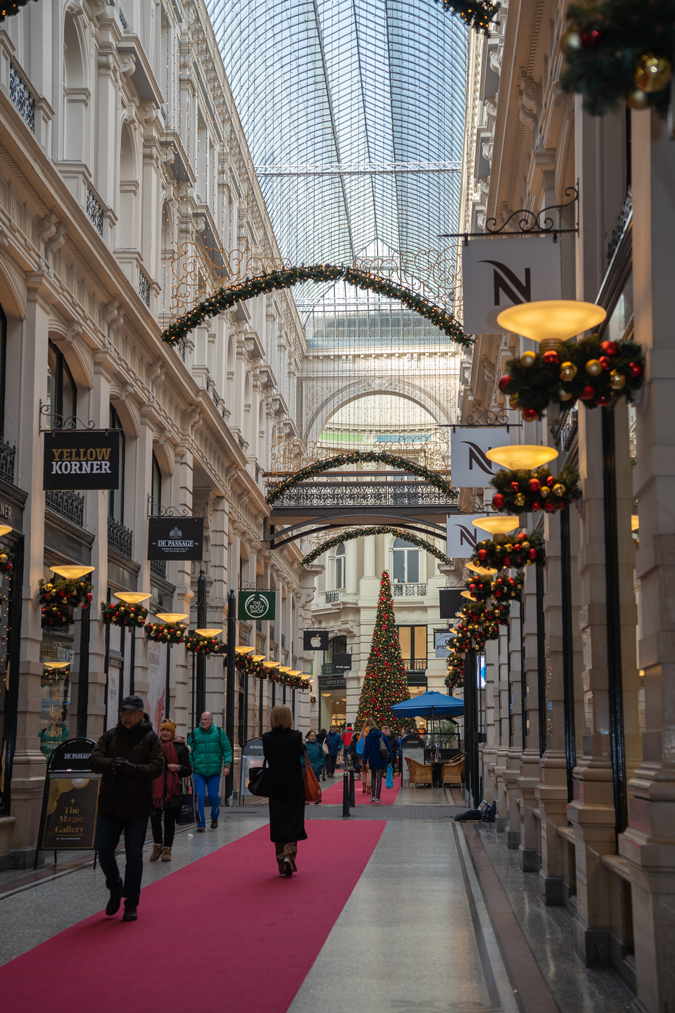 Below: Like everybody else we took a photo with the tree. 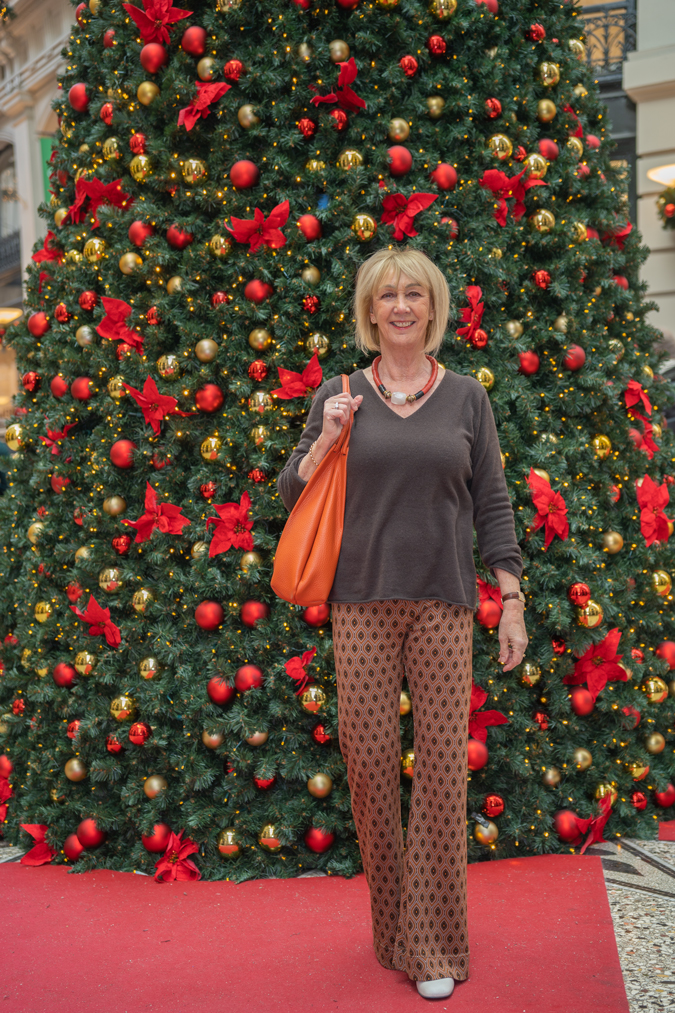 Below: We also found this bench which is quite quirky and complemented the colours I was wearing. The boots are Fly London and several years old. 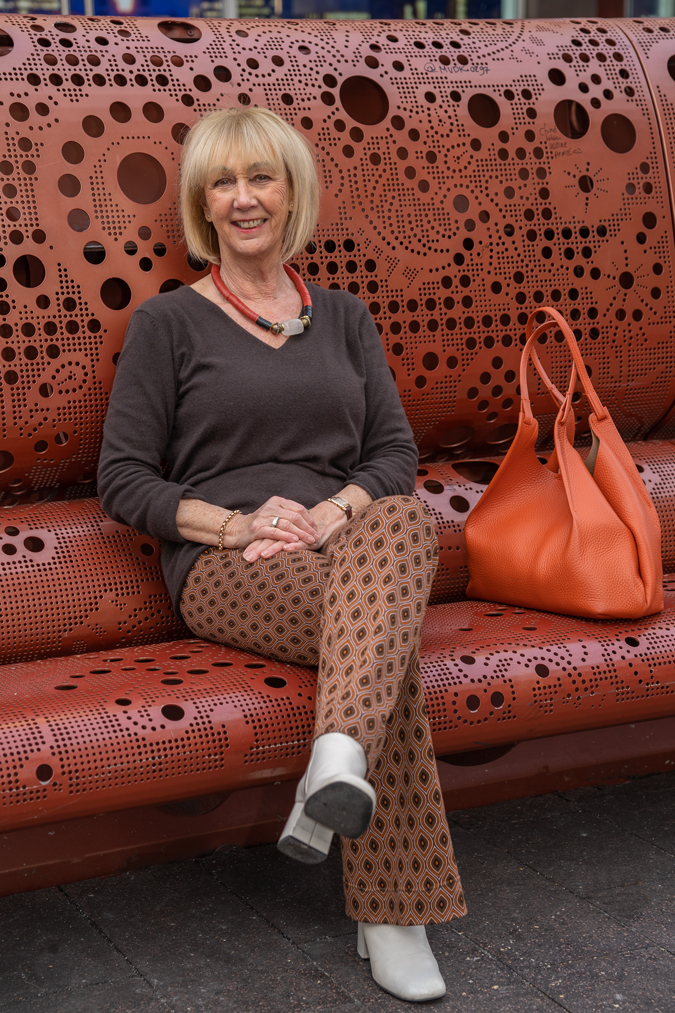 Below: I thought we had enough outfit photos and I was freezing, so off to a nice restaurant for lunch. We chose LEUK (which means pleasant or nice) and we can give this one in The Hague, our thumbs up. Very friendly service, good food and lovely cappuccino.
I made Marjolein take off her coat and pose in front of the restaurant. She did it reluctantly haha. New fashionable black trousers and cream jumper, finished with a pop of green with this great bag. 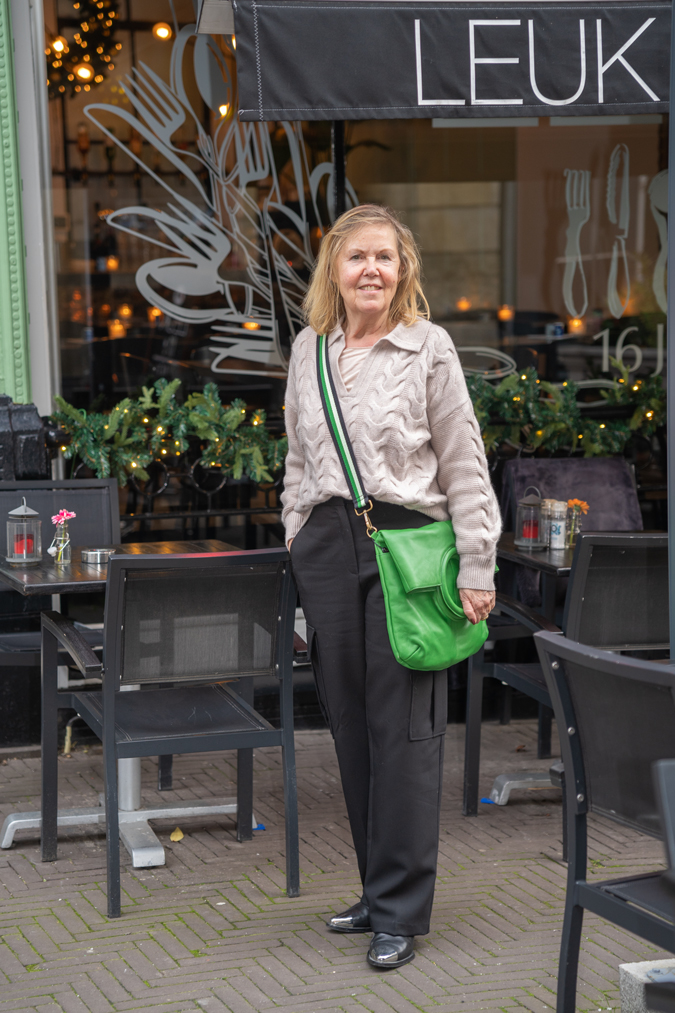 Not too much variation in this outfit section and hardly any story. Bear with me dear readers, cold days bring limitations.

It was a very quiet week. The photo shoot with Marjolein above, was of course nice. And Ron and I had dinner at our friend’s house (Georg and Marla). That was a pleasant evening with delicious food. They are such good cooks.

Marcella (of Lara Design) committed herself to run a stall with her jewellery at the Haarlem Christmas fair. That meant 3 days from 8.30 to 20.00 hrs in the freezing cold. Despite her moonboots and her ski trousers she was still cold. I popped round on the Saturday morning for some moral support. 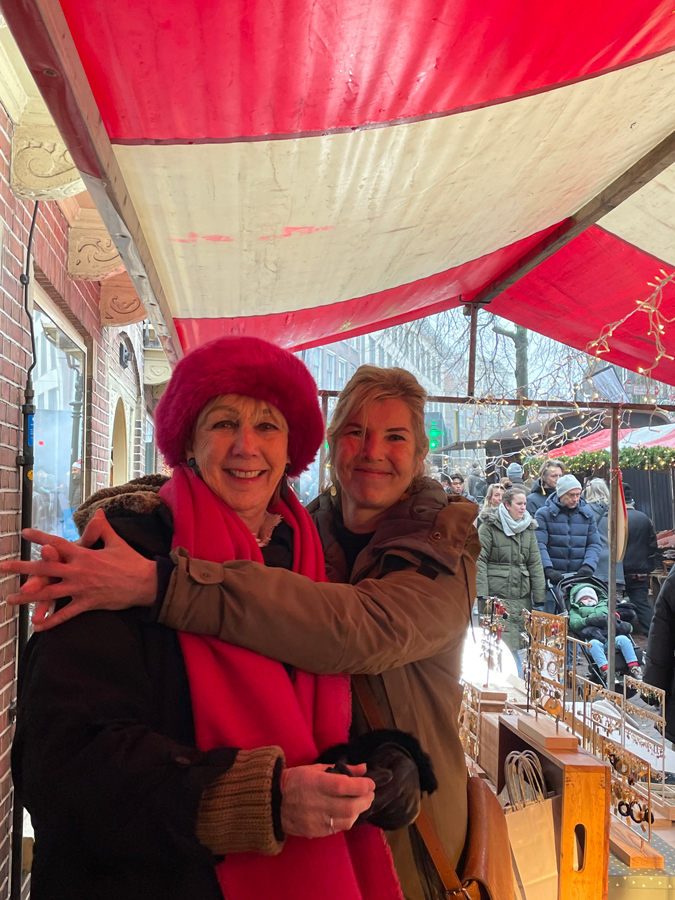 Below: Mum in one of her new jumpers with pearls. 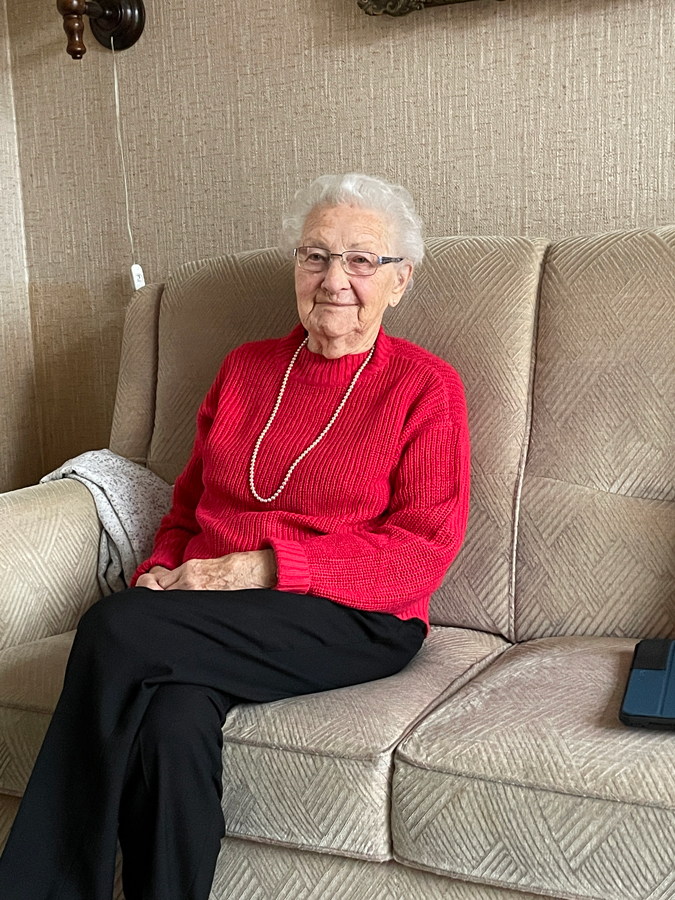 Below: Mum as my niece, her husband and their children visited her. I think this is an adorable photo. 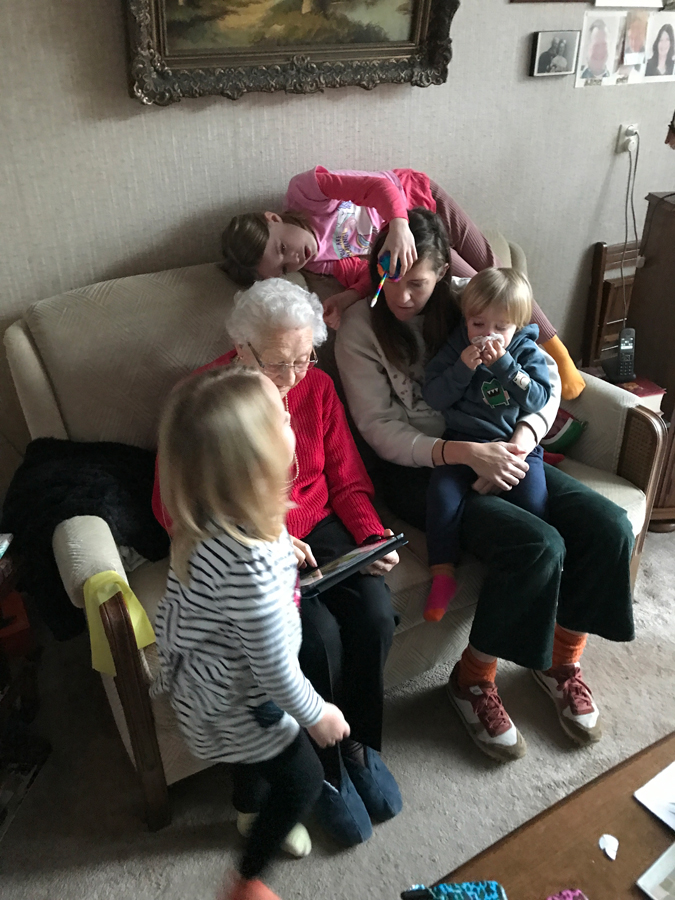 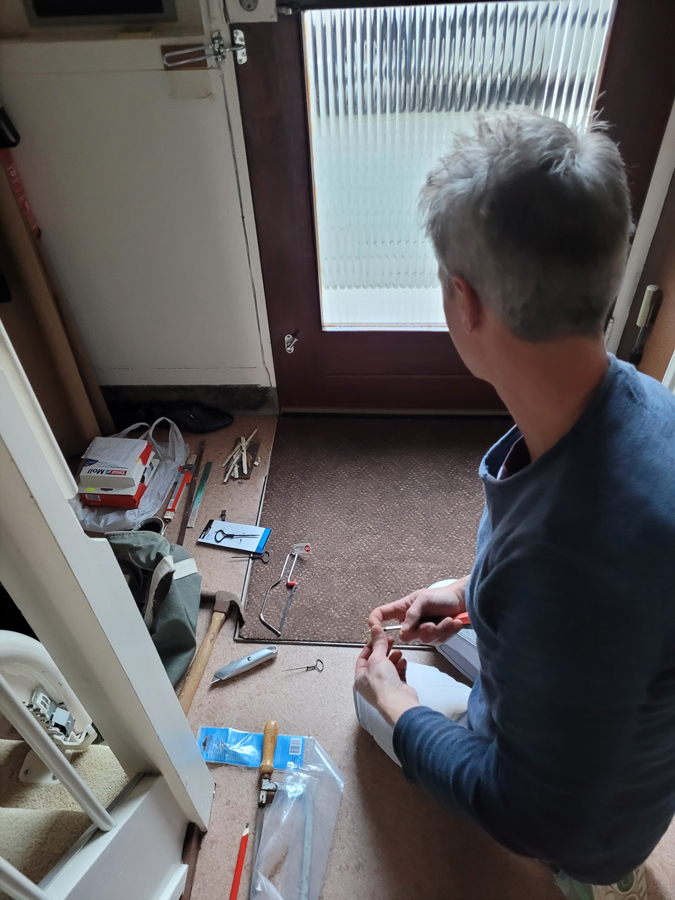 There was the matter of a glitch in my email program Mailchimp. I couldn’t fix it as it required expertise I do not possess. For days I called everybody who I thought, would be able to help me. Ron came to the rescue by searching Google for ‘expertise’ and ‘Mailchimp’. He found saskiasmit.nl who solved my problem in no time, was very helpful (even in the late evening) and gave some additional advice. She gets an A+ from me.
It wasn’t even expensive which is rare.
Why is it rare you might ask? Well, they say you can only combine two items from the triangle ‘good’, ‘fast’ and ‘cheap’.

Which is why Saskia is rare. She did the email job very quickly, very well and at a low price.

Even though we have a new router, the Wi-Fi problem with Ron’s iPad is still not solved. Numerous phone calls to the provider haven’t led to a result. They say they tried everything and cannot help us anymore. So very disappointing.

Together with my neighbour Monique I saw the film Ticket to Paradise. Although it was enjoyable, I totally agree with the review of the Daily Mail: “For my money this is predictable fare, lazily plotted and scripted, and it gets even more predictable, as the visiting Americans are left wide-eyed by the quaint local customs.” From the start you knew how it was going to end and all the bits in between weren’t funny enough. A shame as both George Clooney and Julia Roberts are such good actors. 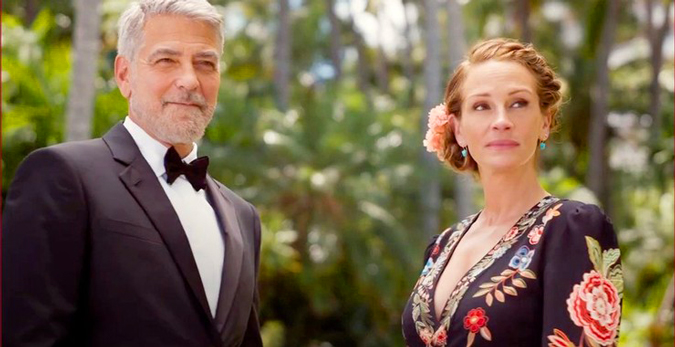 Thursday and Friday our streets were covered with a sheet of ice which made it hazardous to walk outside. When Monique and I returned from the film on Thursday evening, we laughed as we really felt like two old ladies, treading very carefully. Younger people were walking carefully as well, but we were walking like penguins, as Monique phrased it LOL.

I have been styling new outfits with clothes from my wardrobe and found that restrictions bring out the best styling. As it is winter, I am wearing my thick jumpers. It is not necessary to wash them immediately after wearing once, especially as I always wear a top underneath. To put them back on the shelf in the wardrobe isn’t a good idea either, so I stack them on a cupboard in the bedroom. I try and wear them as often as I can so I can wash them again. In doing so, I combine the jumpers differently and come up with new outfits. Restricted by re-worn jumpers, who would have thought.

Nothing else is new, so see you next week.