The first route through Amsterdam started at the Dam square in a department store called The Bijenkorf which means beehive. As you all know what department stores look like, not many picture of that. 😉
If later, you want to view this post again, you can find it under the tab “Amsterdam” in the top navigation. This is where  all posts tempting you to join me in a long (shopping) weekend in Amsterdam are stored.

You can see on the little map which route we walked. “We” means me and my husband Ron for this first route. On the next routes girlfriends accompanied me. 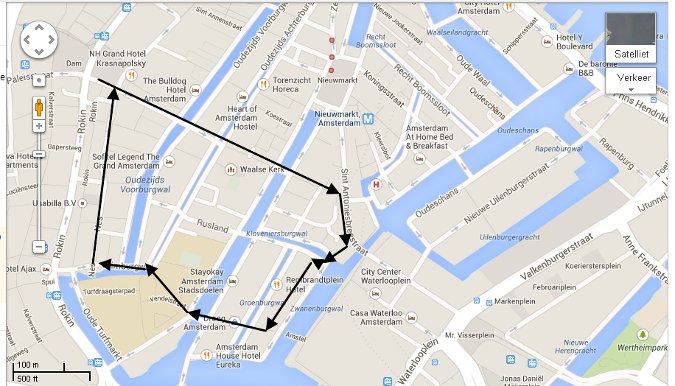 The weather was not all that good at the beginning of the first day. In order to paint you a realistic picture, this is what Amsterdam looks like in the rain. And yes, bicycles everywhere. As you will see in nearly every streetview. 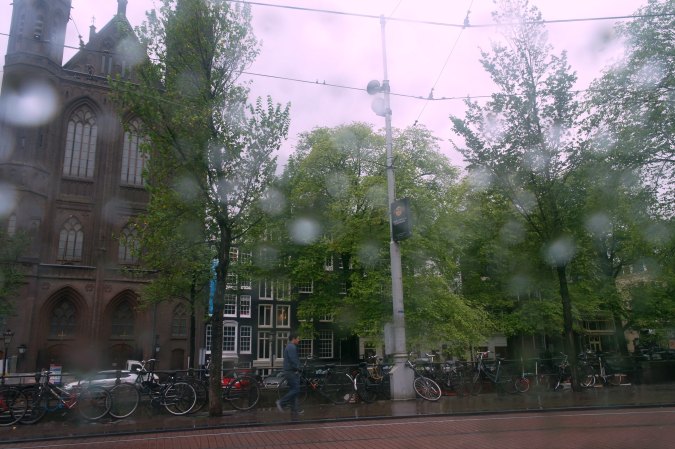 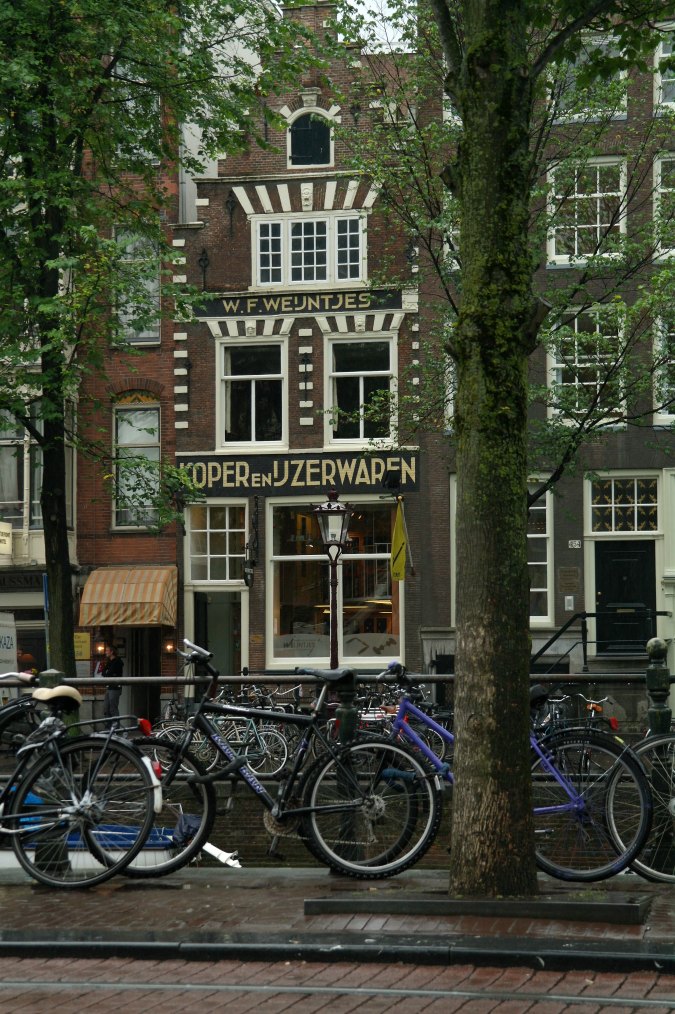 The picture below was taken in The Bijenkorf department store and shows you my shopping outfit. Sensible flat boots with support soles in them, Dan’s necklace and a big shopper to hold the umbrella and any lovely things I might pick up along the way (…..).  The hand on my jacket is to cover up the loss of my button in the parking…. (found it again).
We went for coffee with a plate full of chocolates (I can go wild you know). The cocoa, which they used to make a pretty picture of the plate, covered my white jeans. Not a pretty picture. Some water got rid of most of it though.

And on we went to a beautiful shopping centre called Magna Plaza. Unfortunately there are only a few nice shops there. 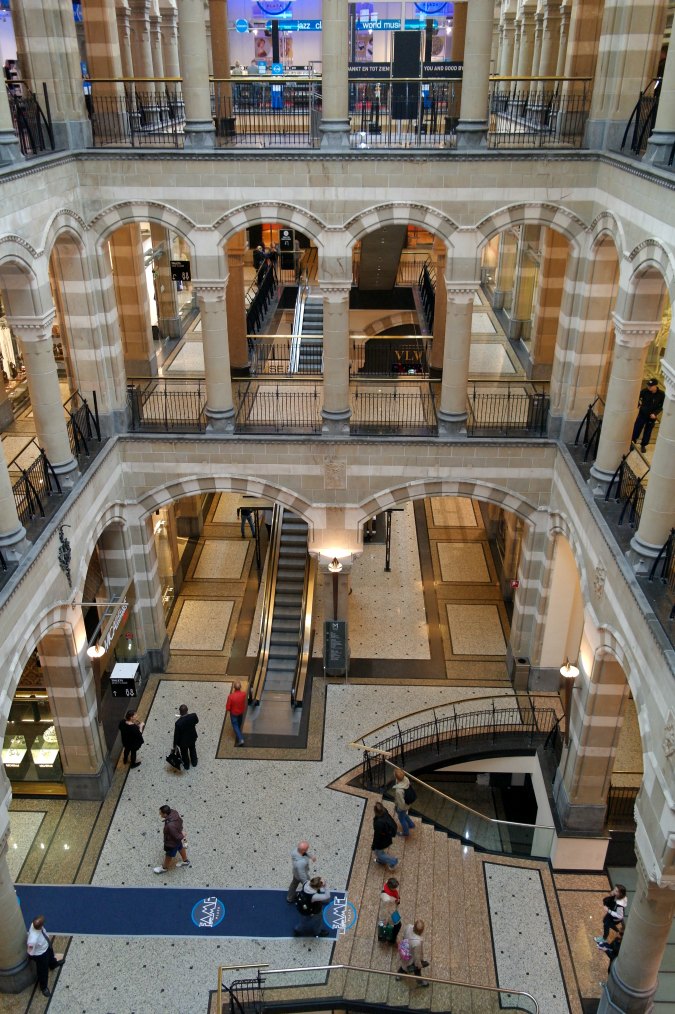 There is a lovely shop called Stilla with clothes, bags and jewellery. See this link for the collection. 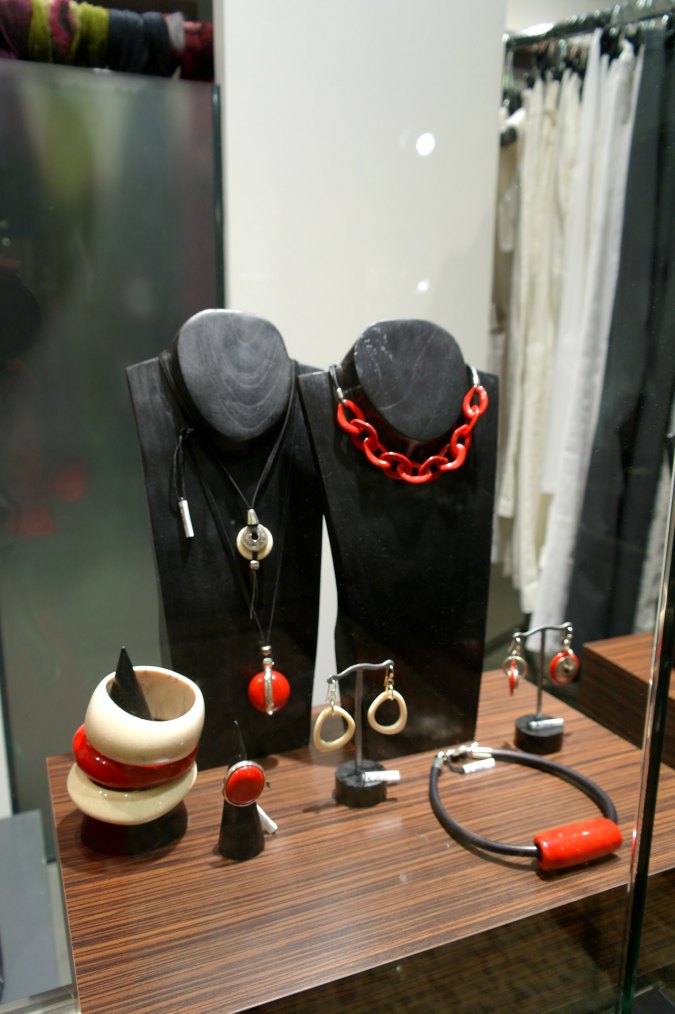 On to the next shop for more jewellery: City Fashion. 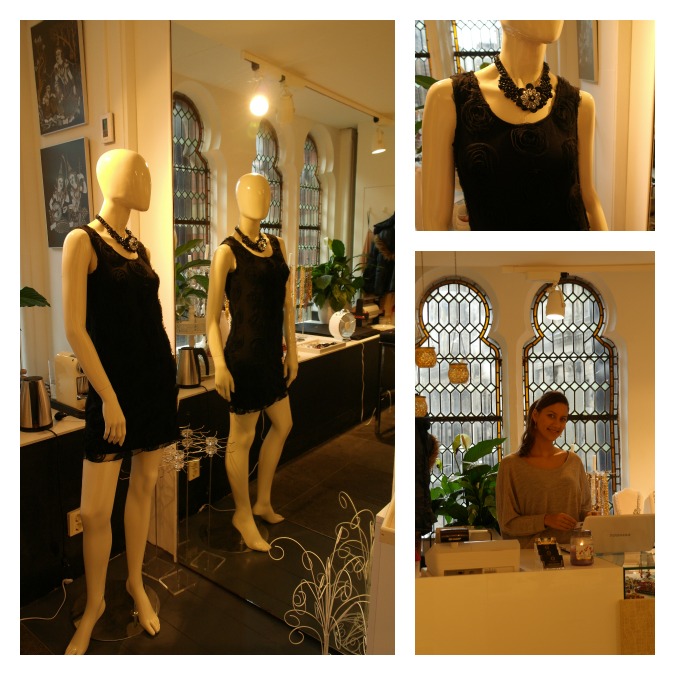 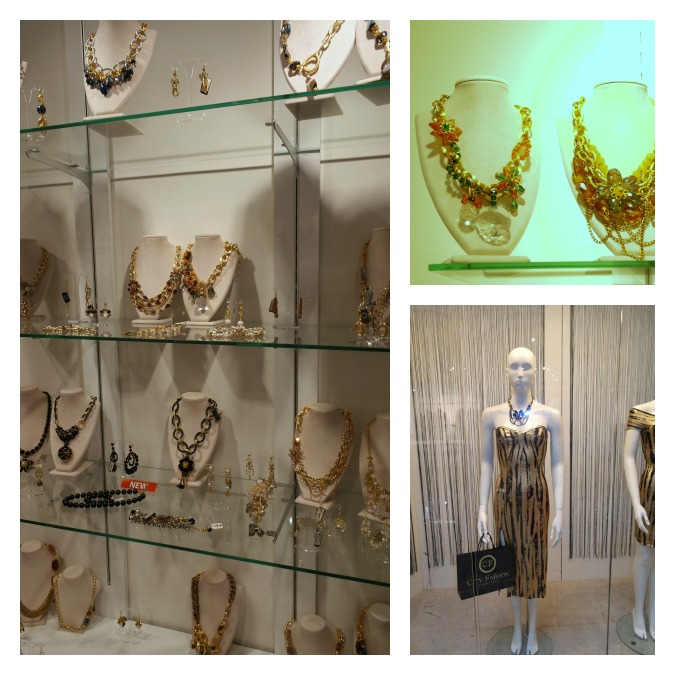 Back across the Dam square where this street artist kept an amazing balance. See his pink tie? 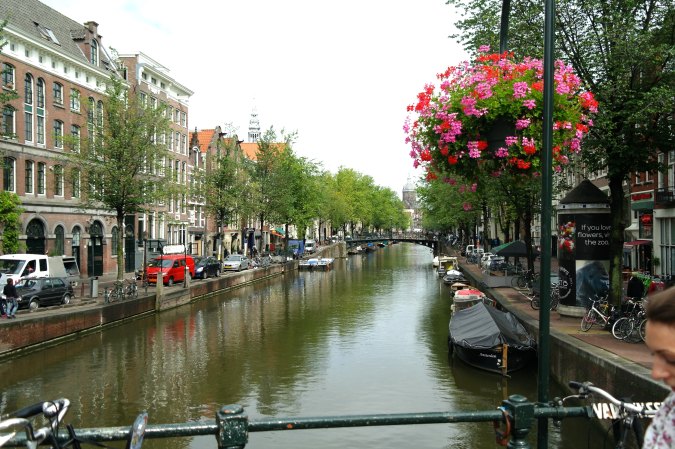 Where ever you go you will see these kind of views like above and below. 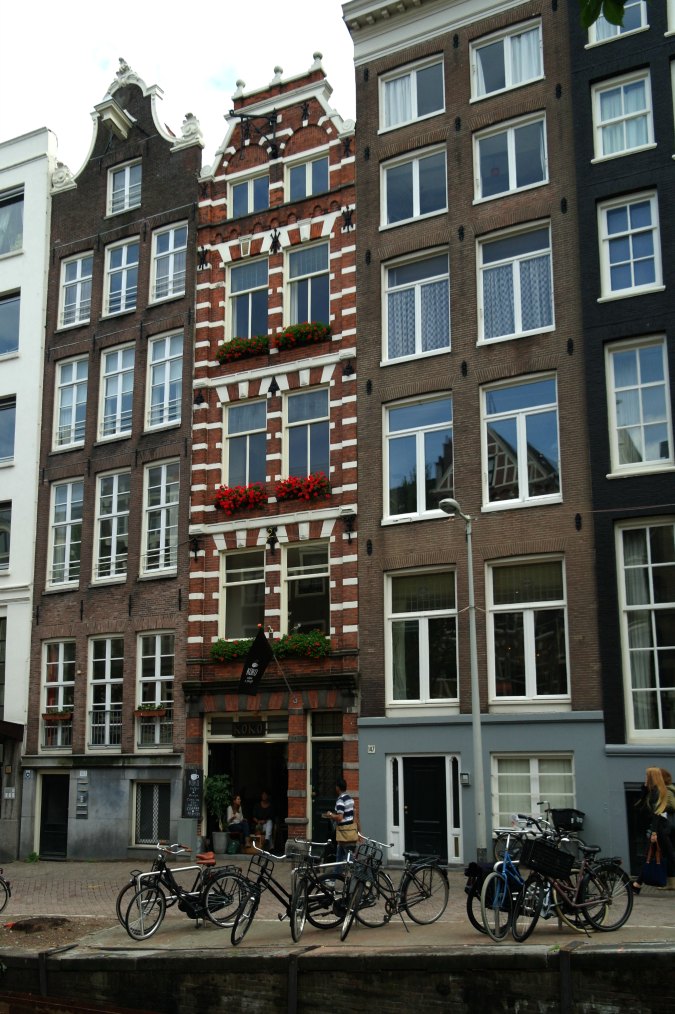 We arrived at Capsicum, Oude Hoogstraat 1, a shop on a corner that sells natural fibers. Like the felt orange stole in the window or the 100% cotton bathrobe which I could not resist. Especially not because Ron thought this robe would be such an improvement on “that worn-out excuse for a bathrobe you are wearing on a Sunday morning”. Who can resist such a recommendation? So I bought it. When I got home and unpacked it, Ron had put the money for it in the parcel. Sweet, sweet man. 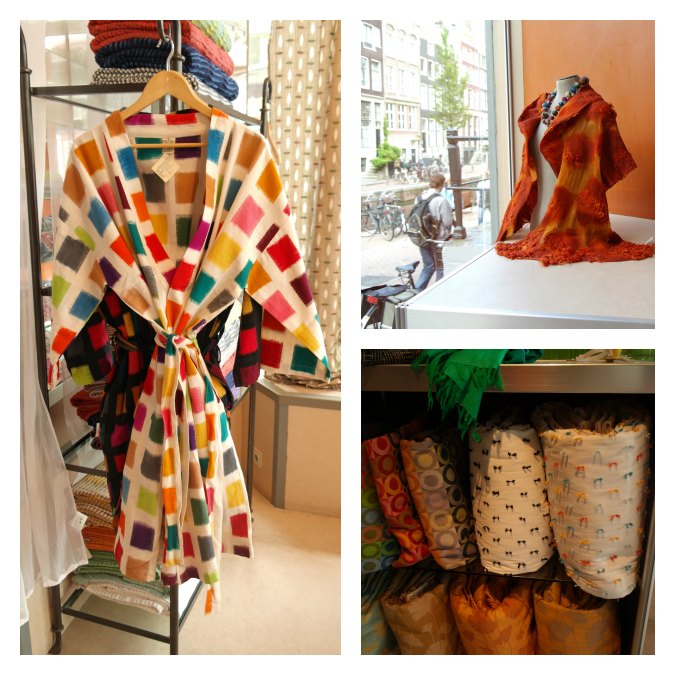 Capsicum also has three dimensional material called Waves and beautiful delicate scarfs. See this link for more products and information. The black stole with red flowers below (folded) is completely covered with beads. It was so lovely and cost € 175 ($ 237 / 147 E pounds) in the sale. Unfortunately I never have an opportunity to wear it so it is still there. 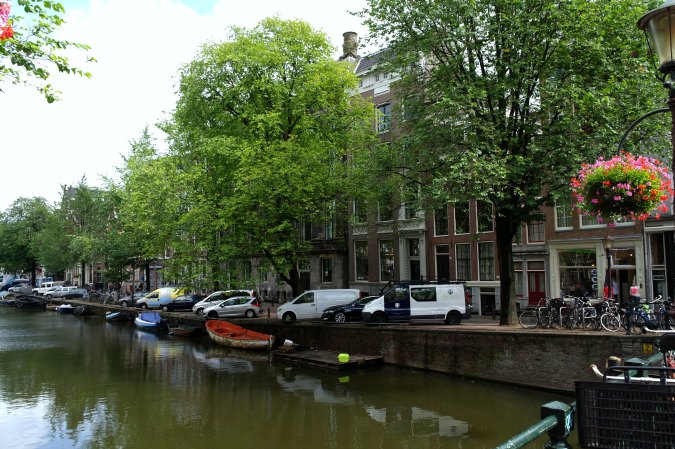 with a view of the Nieuwmarkt (New market). At the top of the picture below the Waag (scales) where they weighed things in the old day. Originally it was a town gate 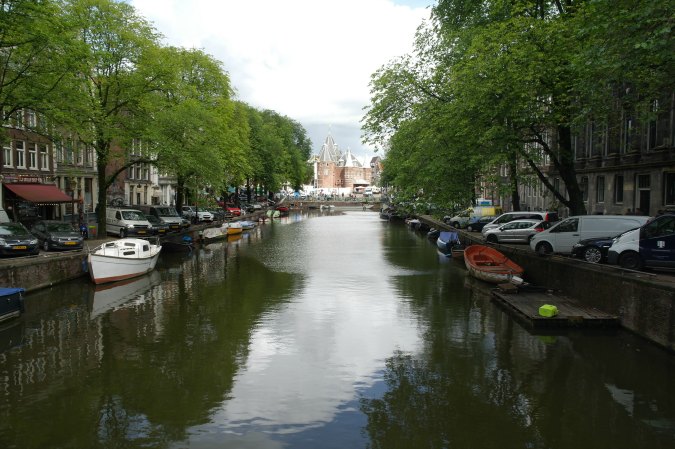 This lovely little hat shop is in the Nieuwe Hoogstraat and I took a photo especially for Judith (Style Crone) to get her over here in May or September too. 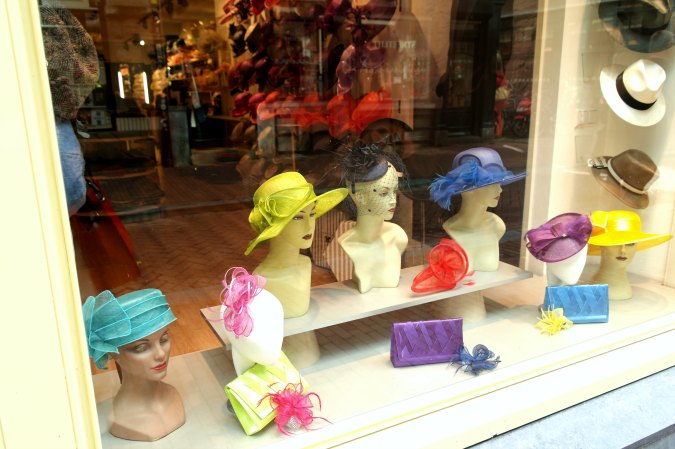 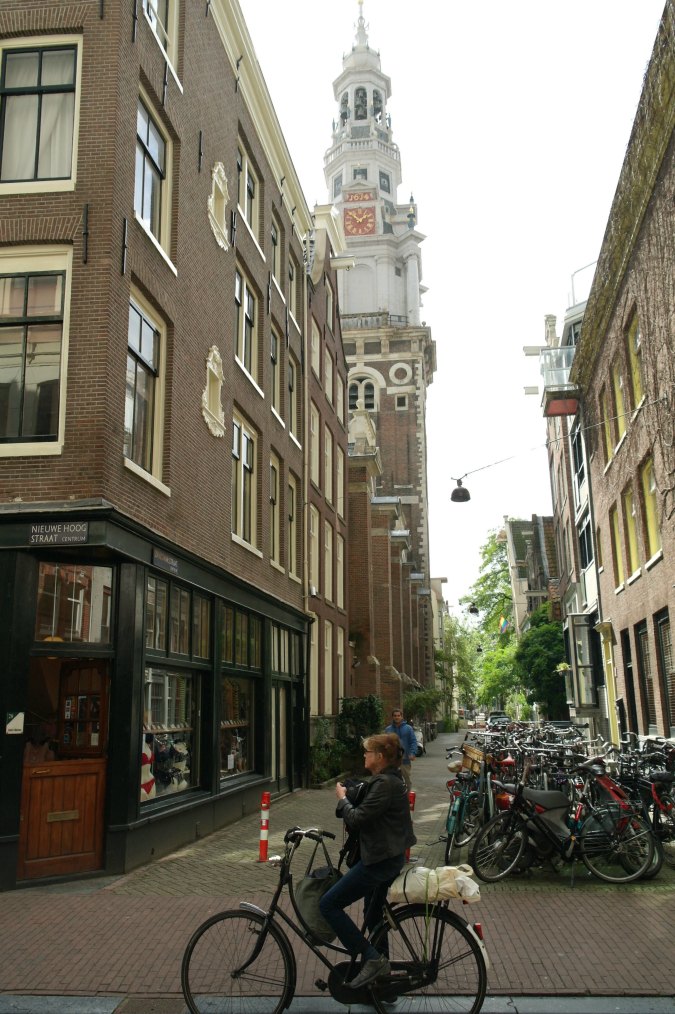 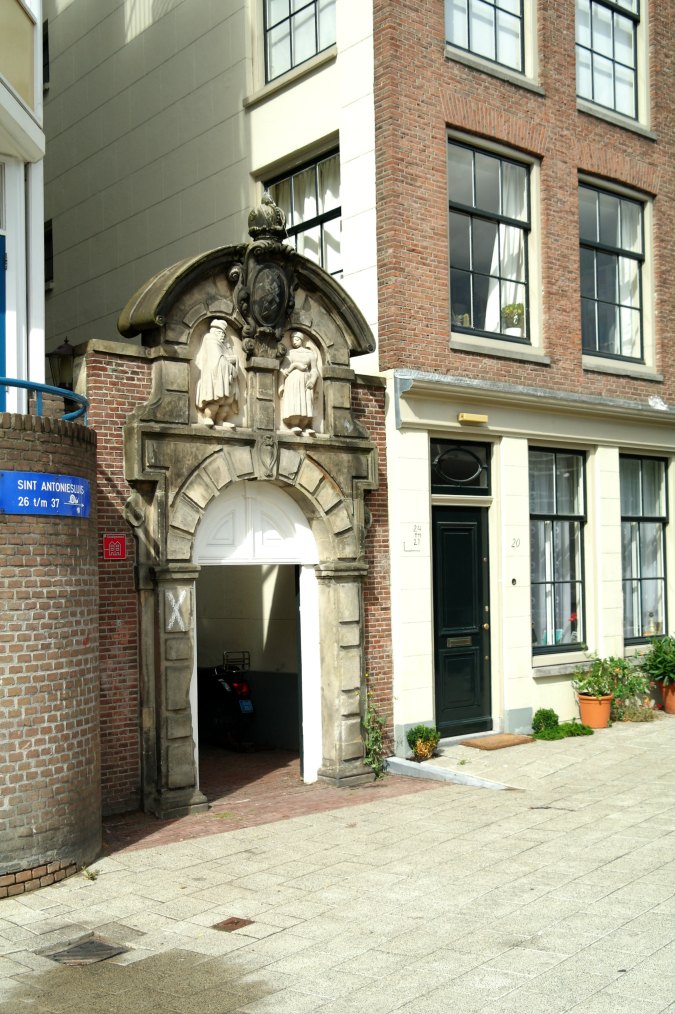 In Sint Anthoniebreestraat we saw a shop called Riele at number 128. The mannequin in the window was dressed in tartan and I asked whether it was Vivienne Westwood. It was not, but they did sell Vivienne (the checked trousers and skirt the lady is holding up) 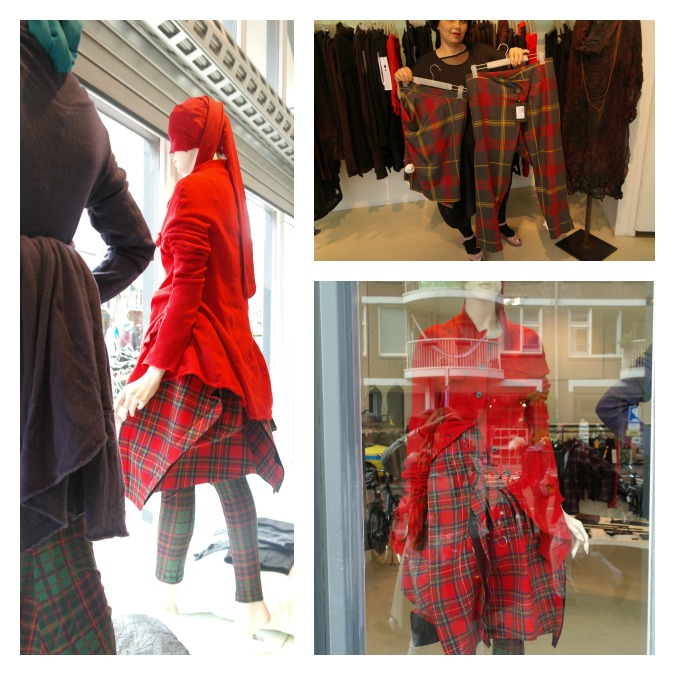 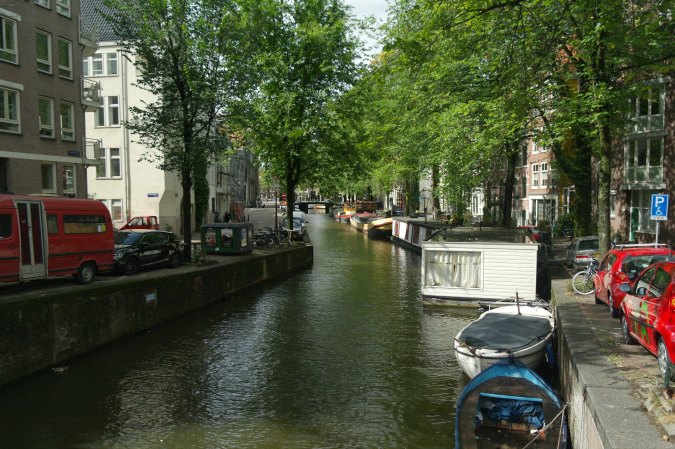 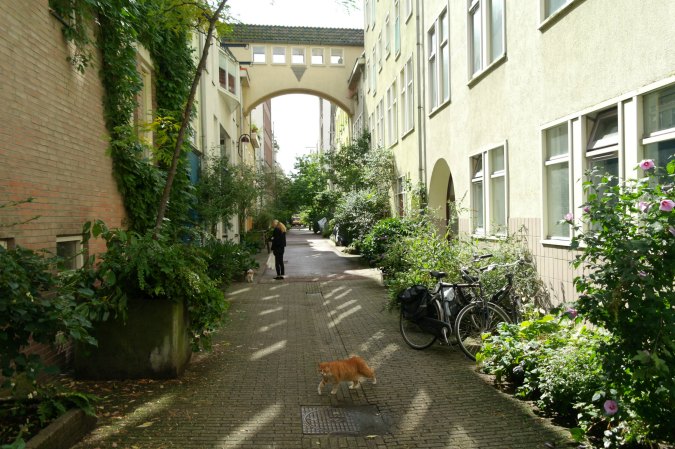 From Ververstraat to Staalstraat. At number 13 is Naturalis op de Dijk (I won’t bother to translate that) a shoe shop with unusual shoes which temptation I resisted. For once. 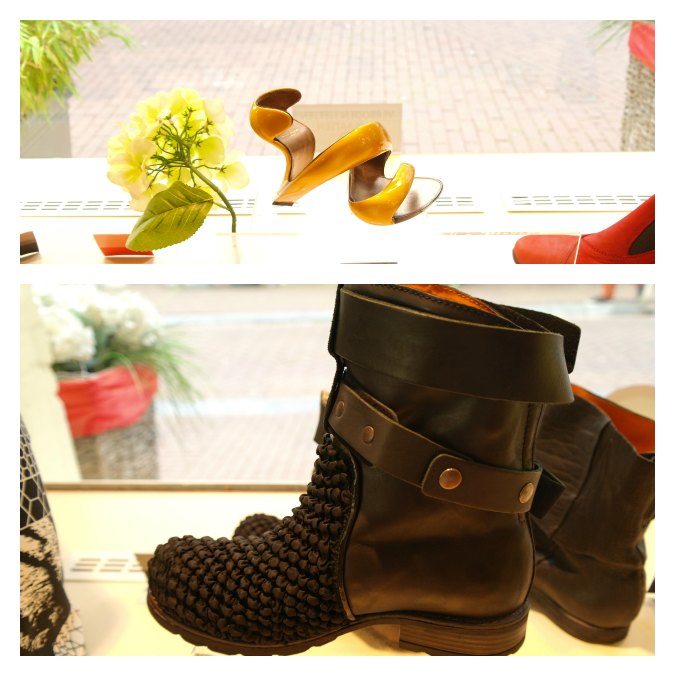 And another canal (really this one is different from the ones you saw before. You can check it).
In the church you see in the distance (Zuiderkerk), Rembrandt painted the Nachtwacht (Night Watch) as the painting was too big for his studio 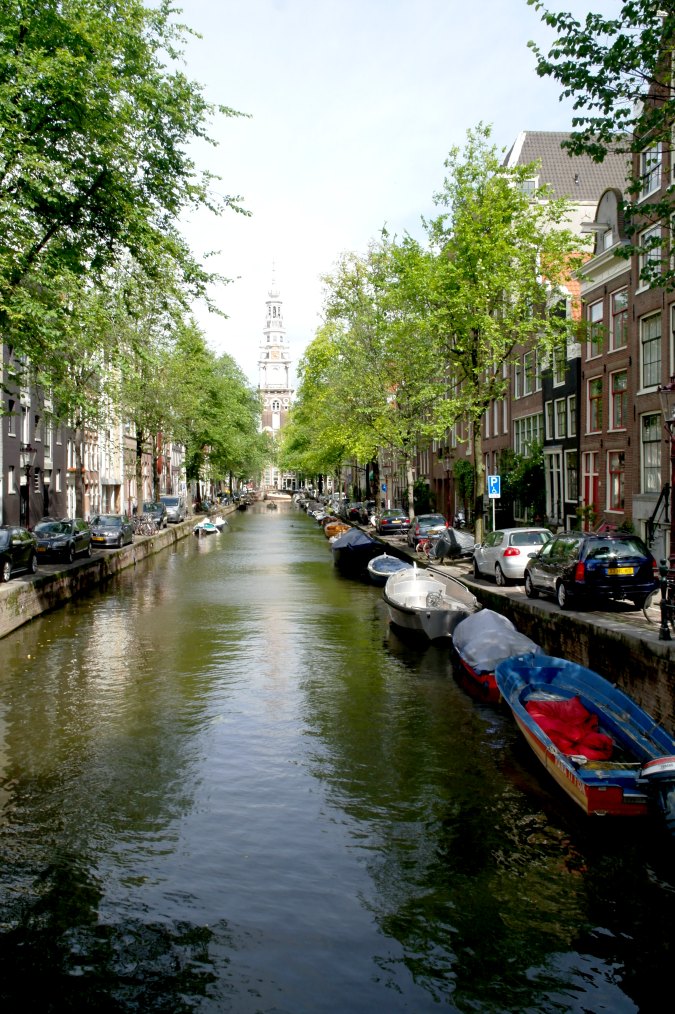 In the photos below you can see an attempt to copy the Pont Neuf in Paris, by attaching locks onto a bridge. Makes a pretty picture 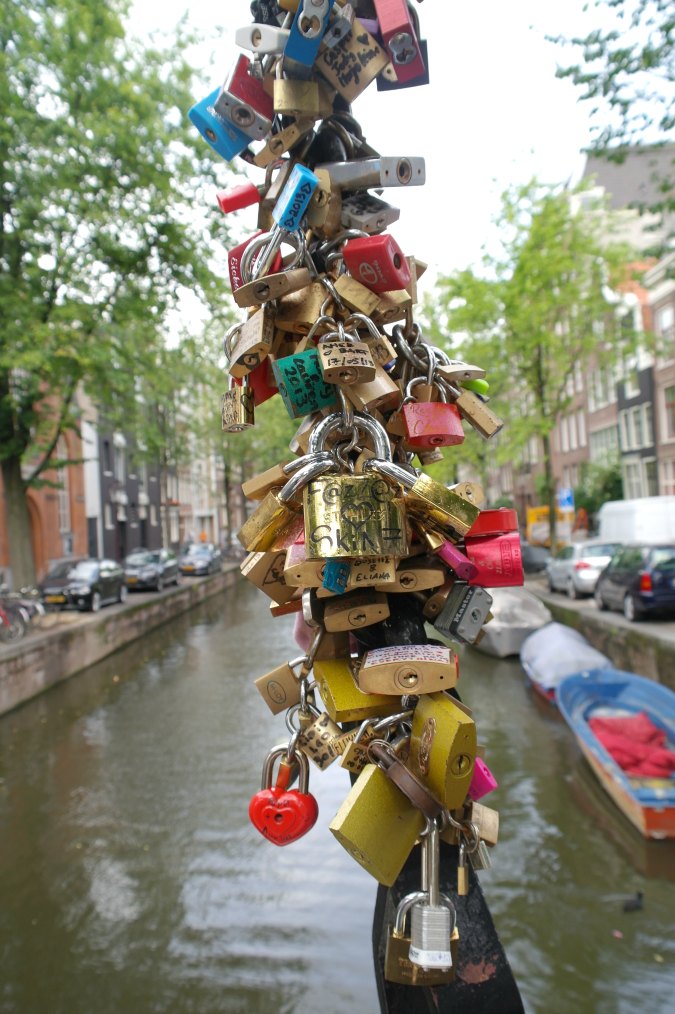 Locks on the other side of the bridge too. (At the left in the photo.) 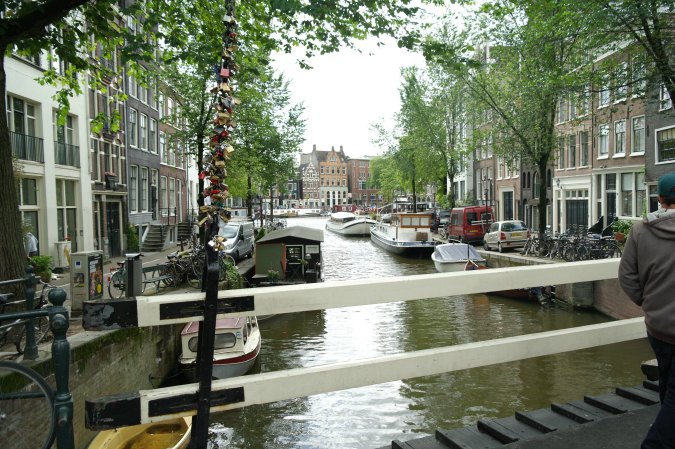 At number 7B in the Staalstraat is a very interesting design shop called Droog (means “dry”). First some pictures of design stuff (here are the knitted plastic boots again) 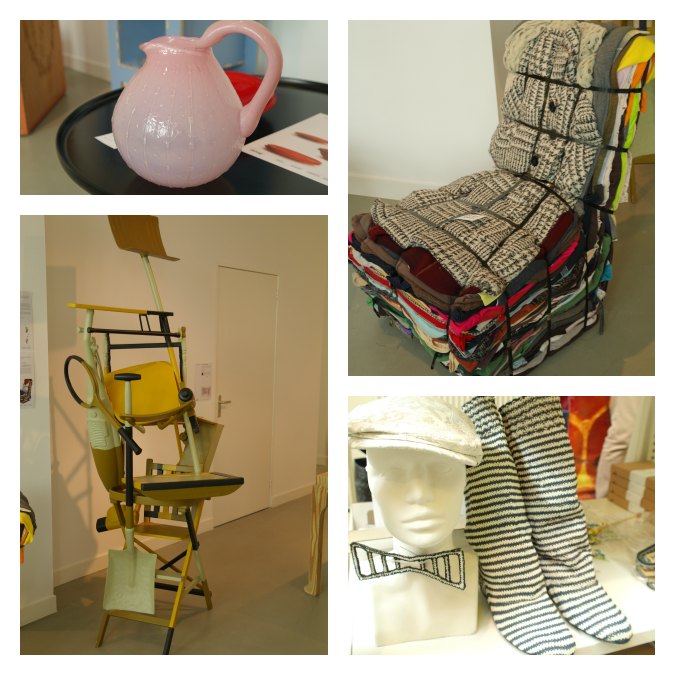 And they have a basement with designer vintage (the Paris stuff as well) from the sixties and seventies. 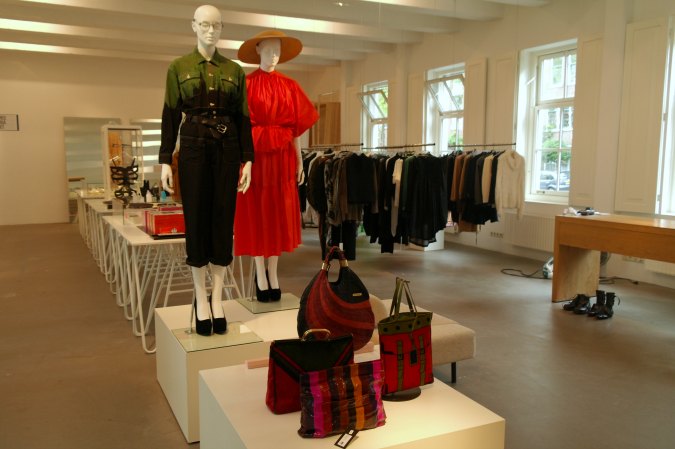 The bracelet you see below is by Dior 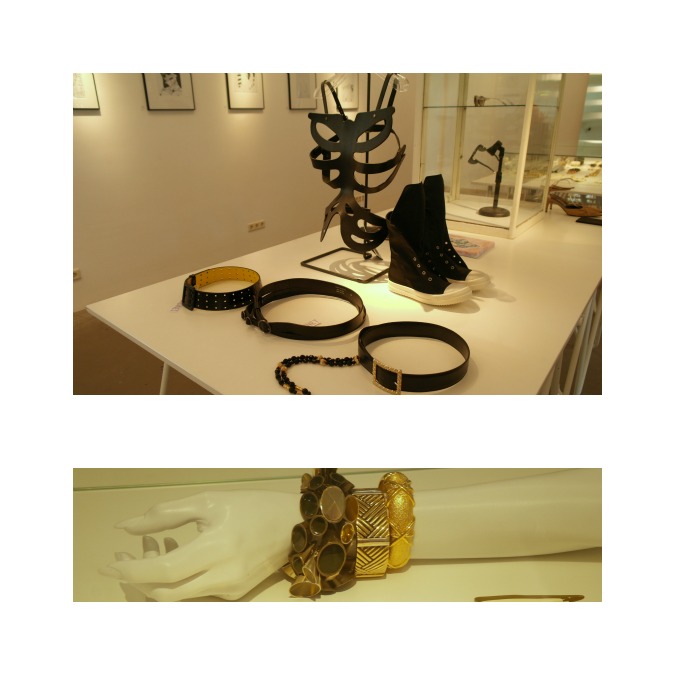 And the last stop was at a contemporary jewellery designer shop called Beaufort at Grimburgwal 11.
Have a look at better photos than mine on their website 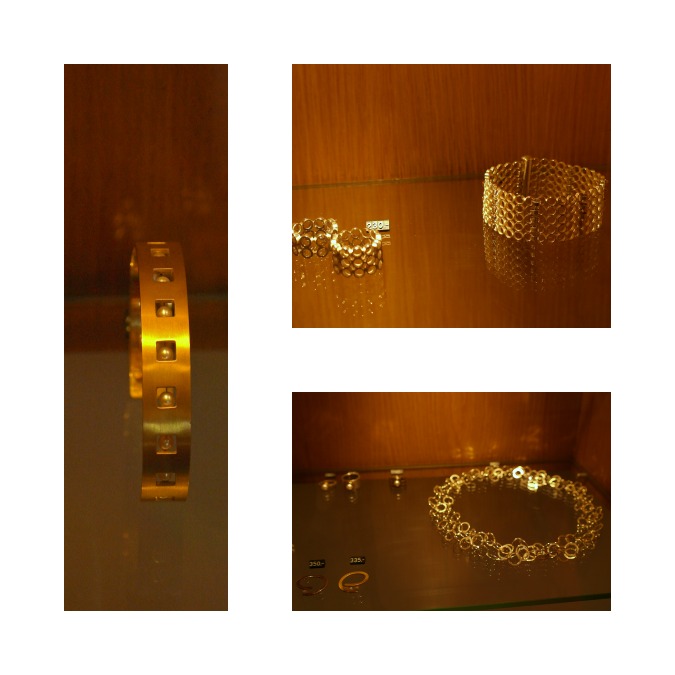 That concludes route 1 through Amsterdam. We had potato stew with sour kraut for diner. 😆
Rest assured that none of these shops paid me or asked me to feature them. I do not “do” commercial.
I am just showing these pictures to tempt you to come to Amsterdam in May or September. See my previous post about this.

Was it too much? Please let me know what you think and be honest.
Greetje