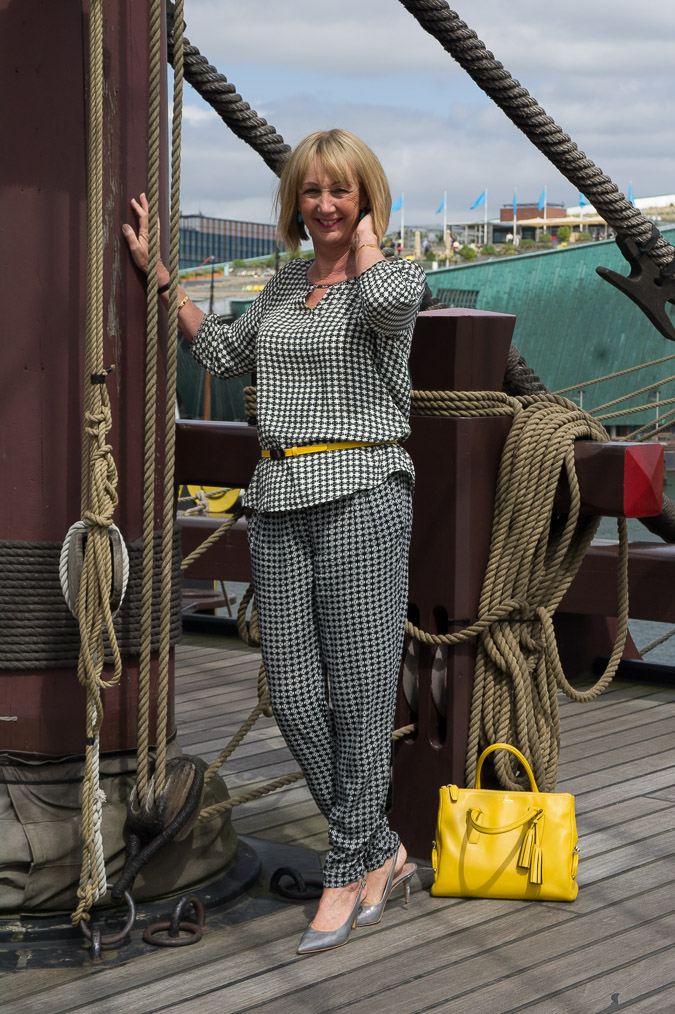 Another little piece of my beloved city: Amsterdam Maritime Museum. For the Dutch: Scheepvaartmuseum (don’t even try to pronounce it when you are not Dutch). My husband Ron was kind enough to take photos again of my new outfit, my variation on a jumpsuit. Very comfortable, like PJ’s. Because it is not one piece but a top and trousers, it is easier to make it suit my bodyshape. Top and trousers are the same pattern, only contrast. In this post you will first see “outfit”, further down “ship” and “museum”.

Of course I was wearing flat shoes when we arrived… Walking on a ship with stiletto heels is such a crime to the boat. Only, we were taking photos outside of the Maritime Museum and only went in for a cup of coffee. They have a great restaurant. The upside of their wooden tables have marquetry (inlay) in the shape of ropes and their cakes are really good. Their apple pie was worth committing a sin. What do I mean by that? Well… I am trying to remain the same weight, in order to fit alllll those clothes in my wardrobe. Which means: hardly any cakes, no alcohol (that is easy for me),  in short: watch what you eat. Or did you think a reasonably slim figure at my age just came naturally? Haha…, no way José. OK, back to the subject.

These outings with Ron are a real pleasure for me. For him? Hmmmm… it is not his hobby, he just likes doing me a favour. Not very likely he is going to take all my pictures from now on. Perhaps if I am really, really nice to him? He doesn’t want to see his picture on my blog either (shy, I guess). After some objections I did get permission to publish this picture:

Below: Ron contemplating on how he is going to photograph me. See his serious face? His mind is working. And no, he is not wearing his T-shirt inside out. It is meant to be worn this way (fashion eh?). 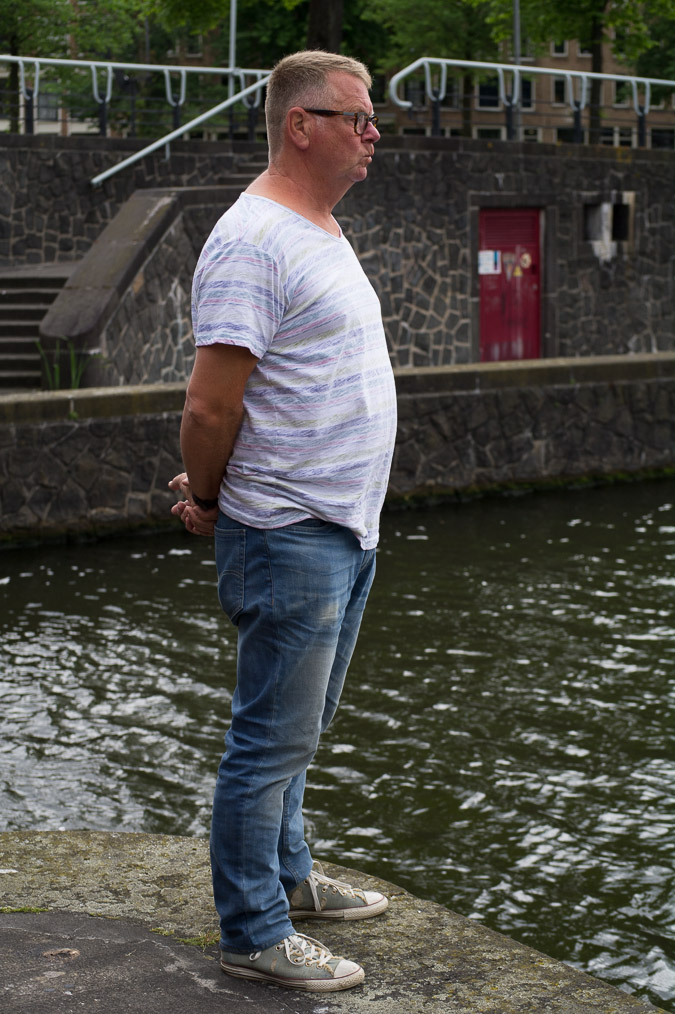 Below: we started underneath a bridge near the Maritime Museum. Each time Ron stood 2 inches from the canal, it made me feel sick to my stomach. If he were to thoughtlessly step back….. 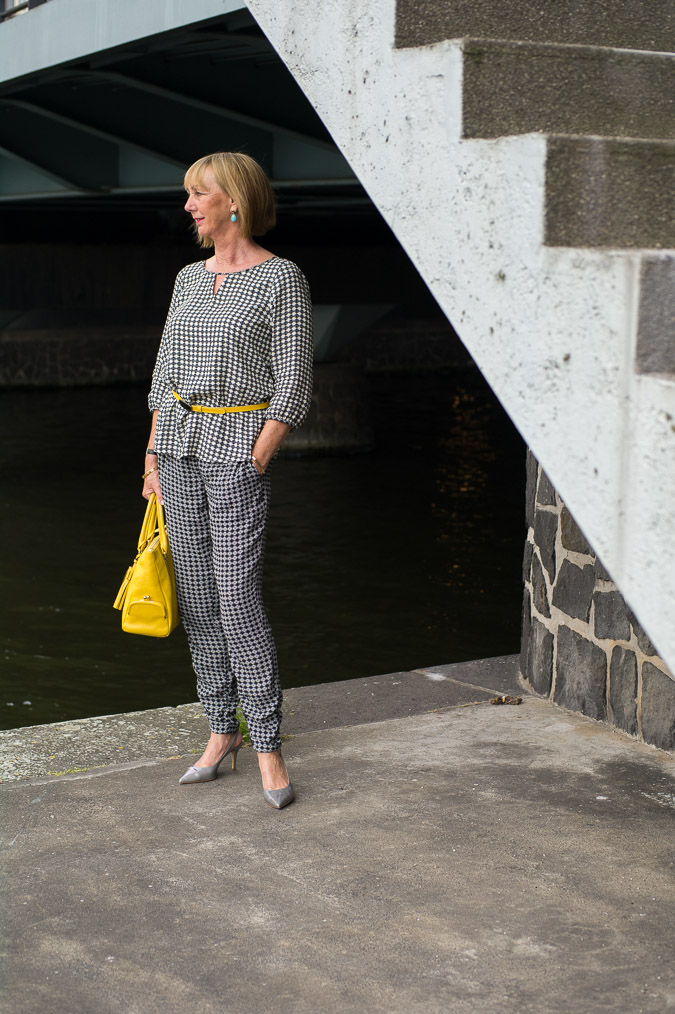 Below: some more pictures of the outfit from different angles. 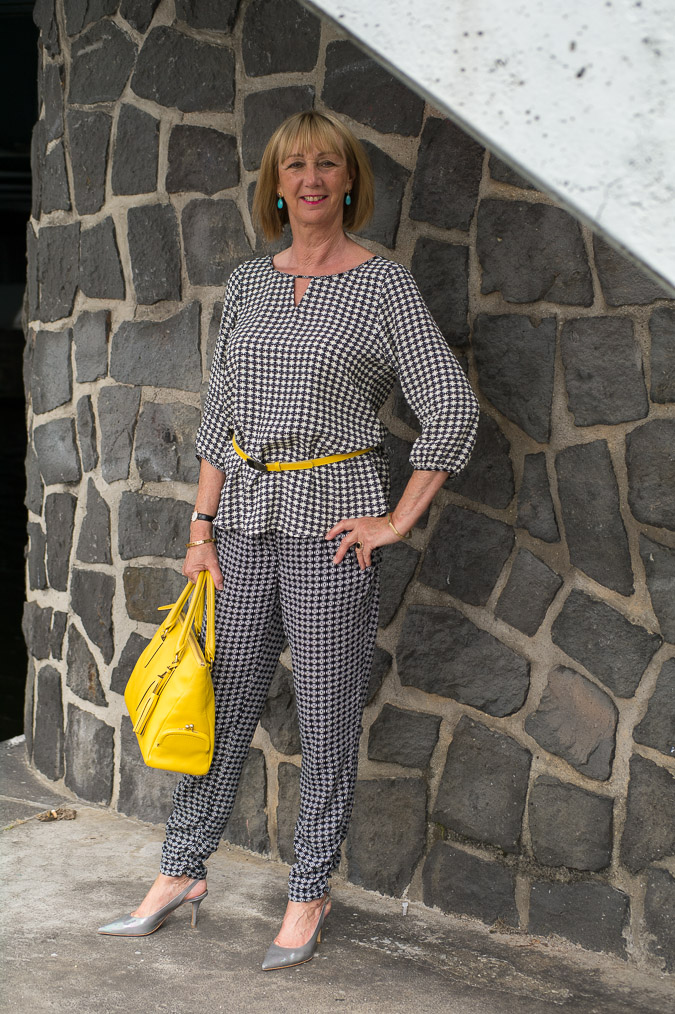 Below: look… nice red door as background. (Ron found this spot.) Ann of Blue Hue Wonderland used to make terrific photos with industrial backgrounds like this. Such a shame she stopped blogging. 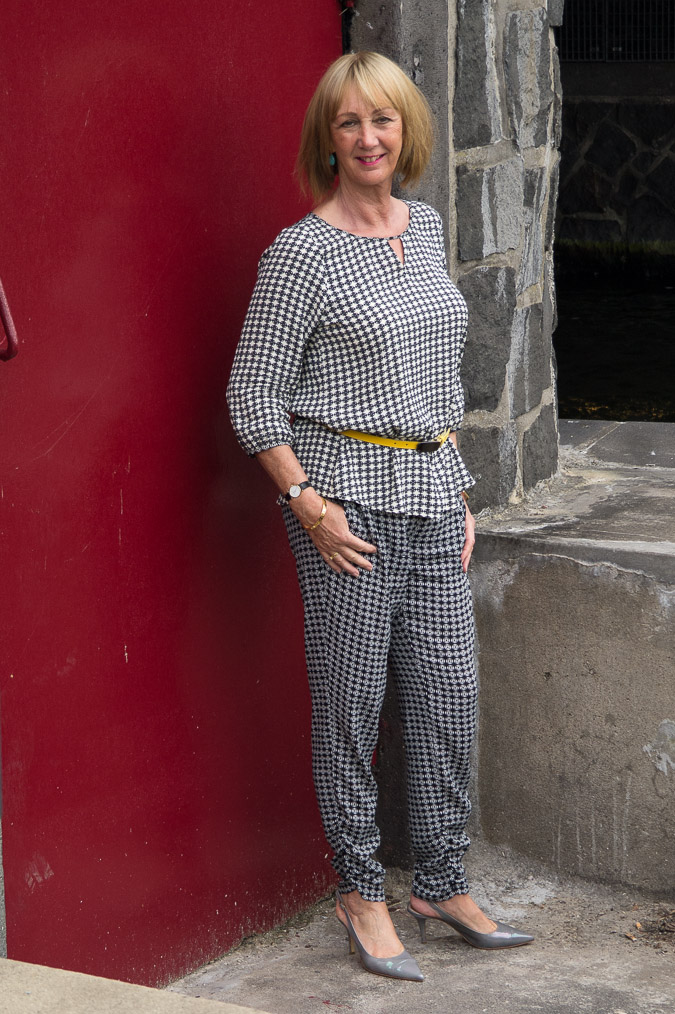 Below: gosh my hairdresser is good!!! 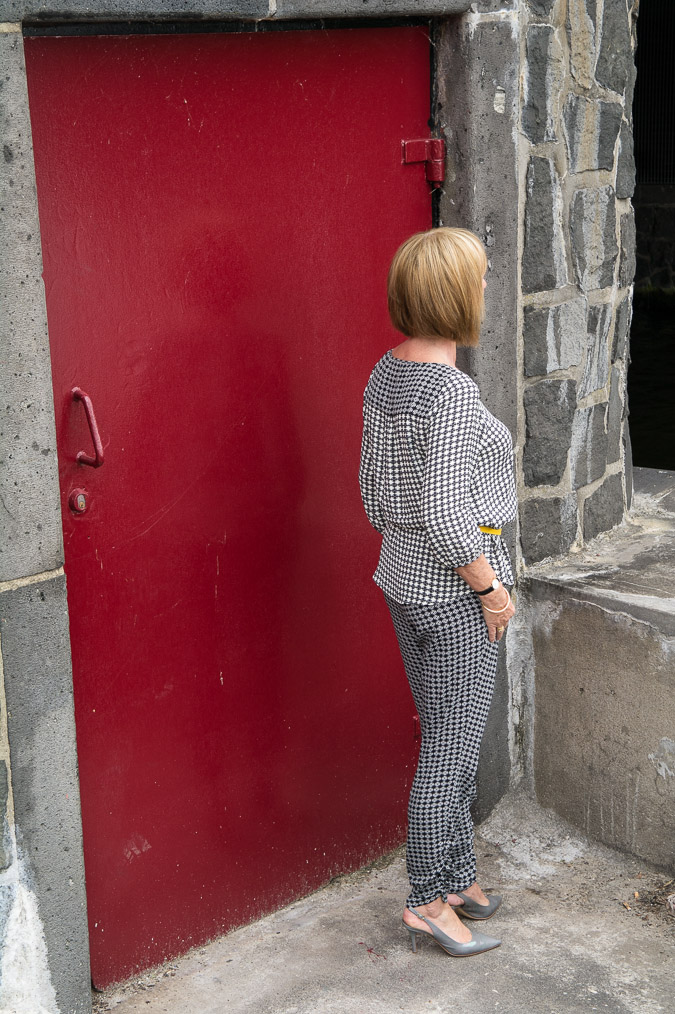 Below: details…… Yes those shoes look very much like my silver slingbacks, but these are more grey and have a lower heel. Less spectacular, much easier to walk on. (I ruined them during this shoot by stripping the heels. Rats… my cobbler will fix that though. He is European champion shoe making.) 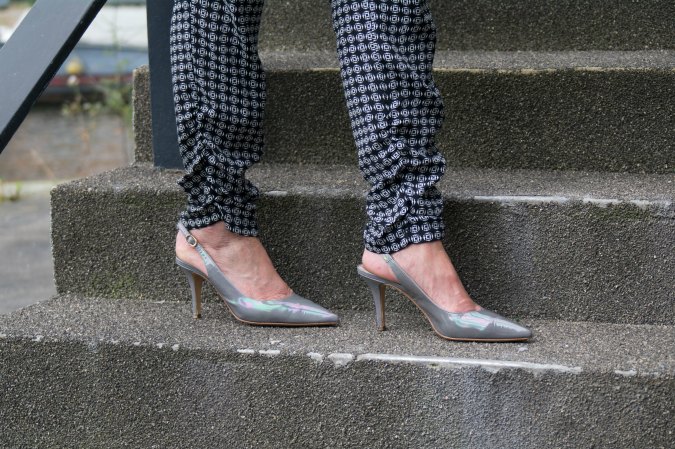 Below: my trusted yellow Coach bag. 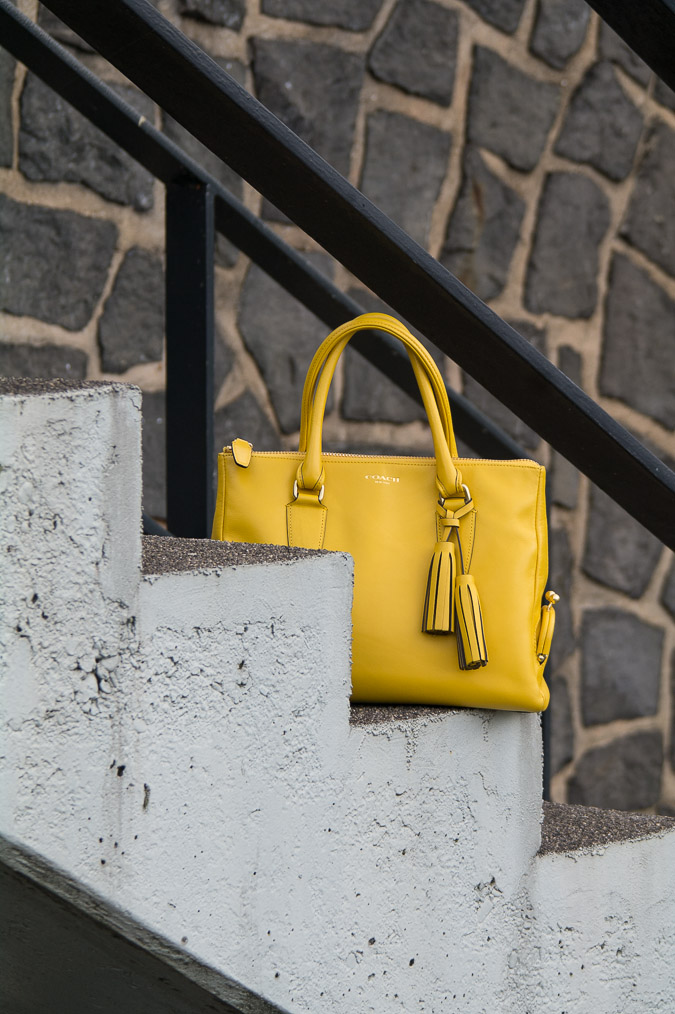 Below: let’s move on to the National Maritime Museum. 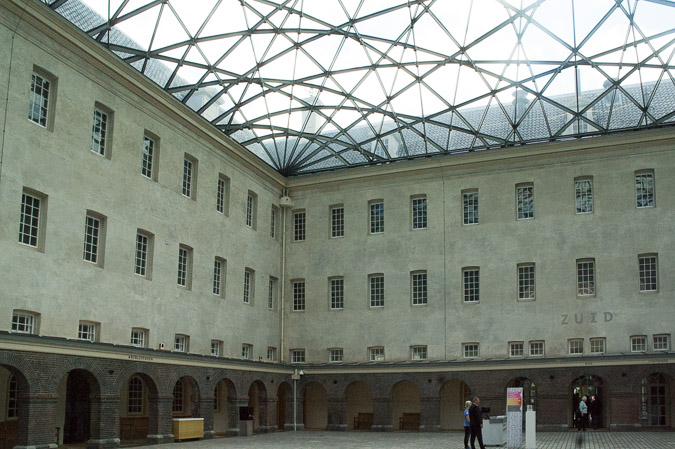 Below: behind the museum is the replica of the Dutch East Indiaman, the Amsterdam, docked alongside the quay. The museum’s biggest attraction, literally and figuratively. 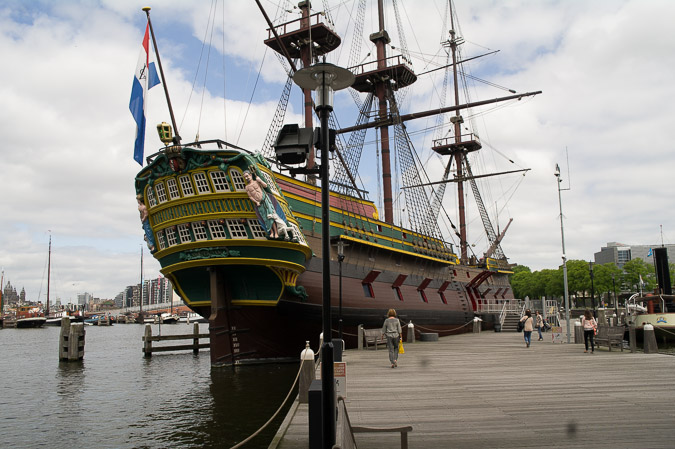 Below: see the little windows at the back? I think that is where the captain had his quarters. This is how it looks from the inside 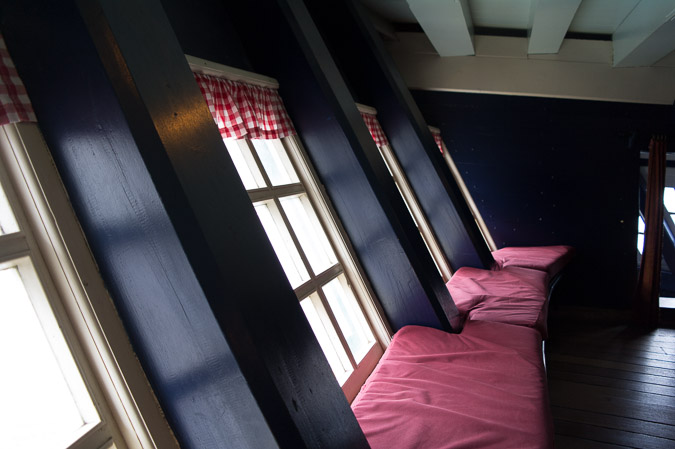 Below: this is the view looking out. 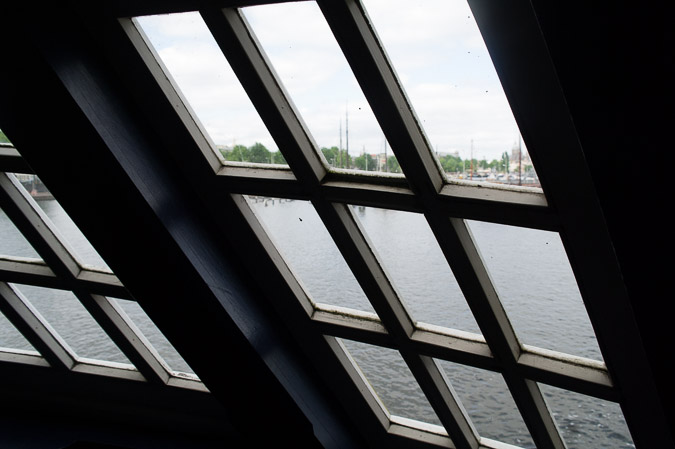 Below: part of the captains quarters. 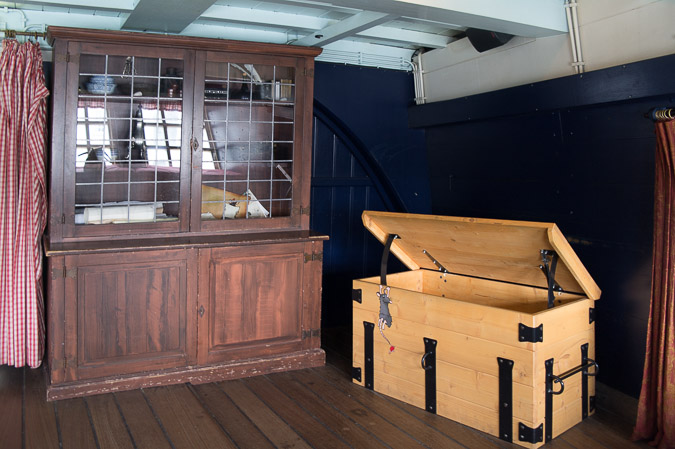 Below: the captains table, safely secured to the floor by a rope. See the opening at the left? That led to the toilet, the WC 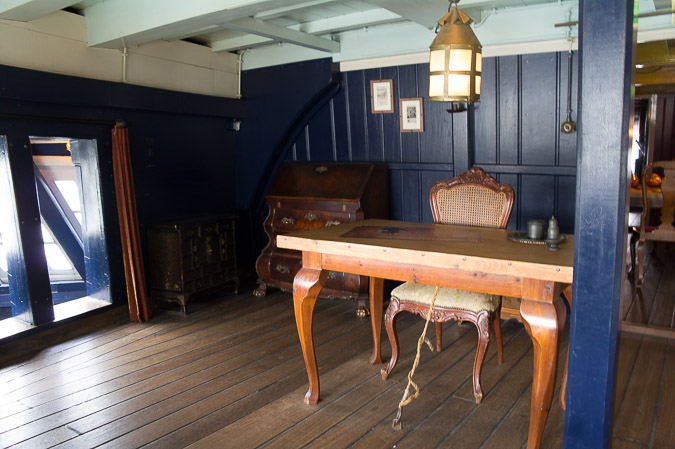 Below: we have different standards for toilets these days. In those days on the ship you just lifted the lid… Well… the captain. No idea what the sailors did… 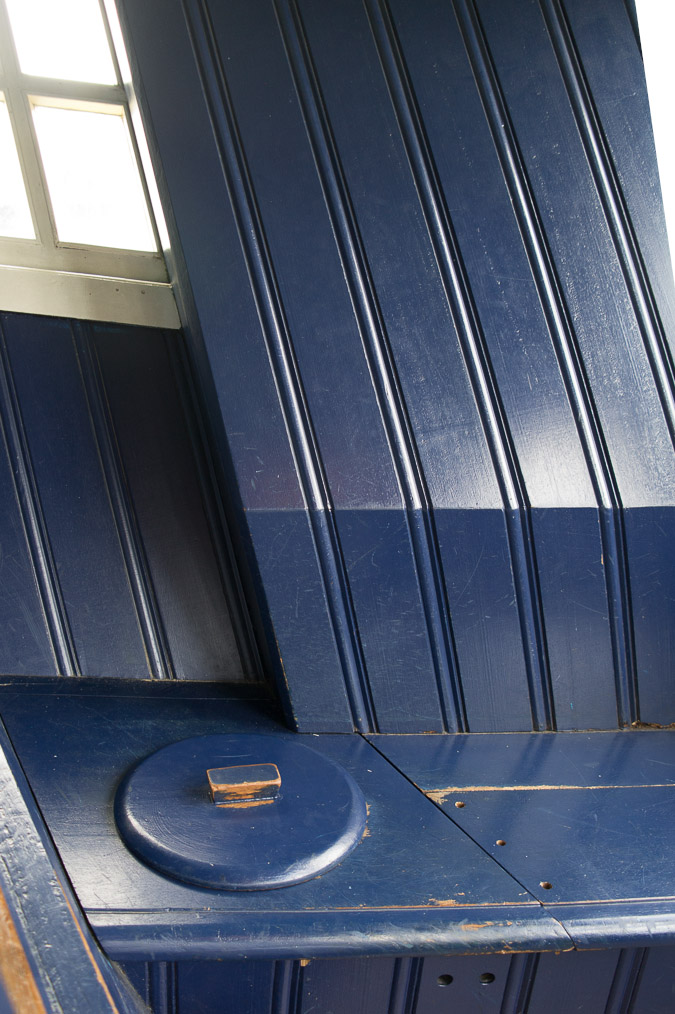 Below: the ship is huge as you can see by comparison to me. See how the top piece of my blouse is the same contrast pattern of the trousers? 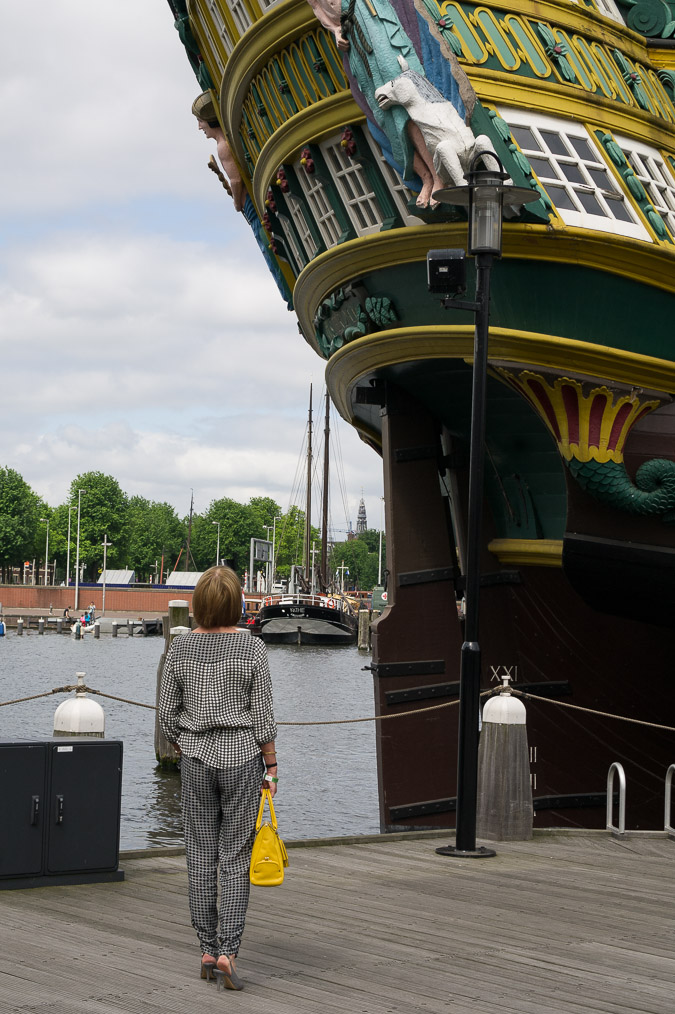 Below: some “artistic” photos on the ship 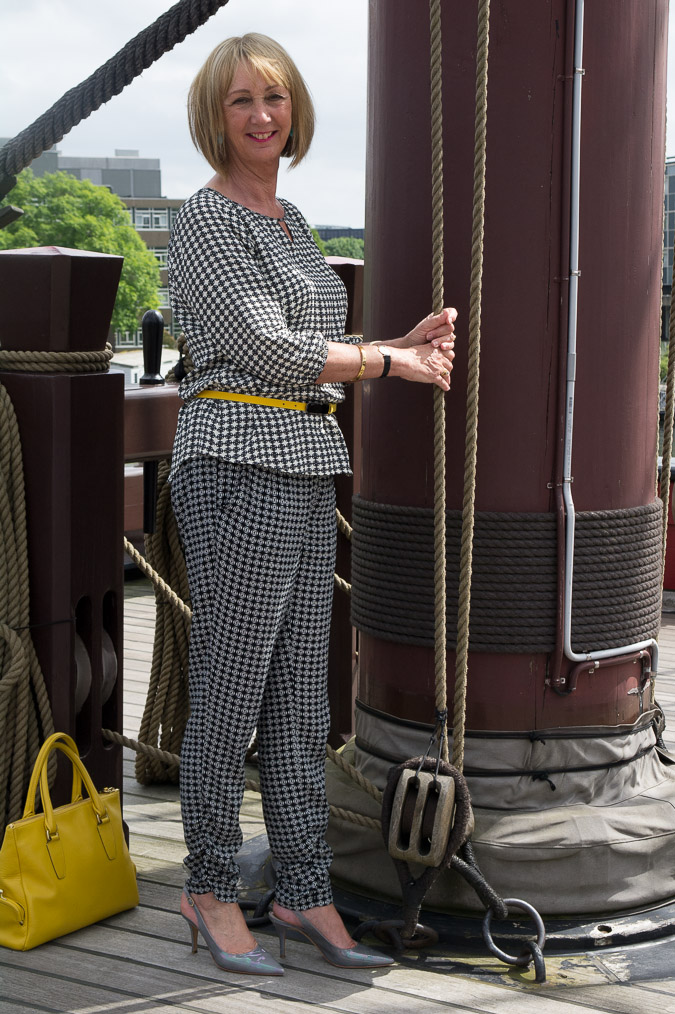 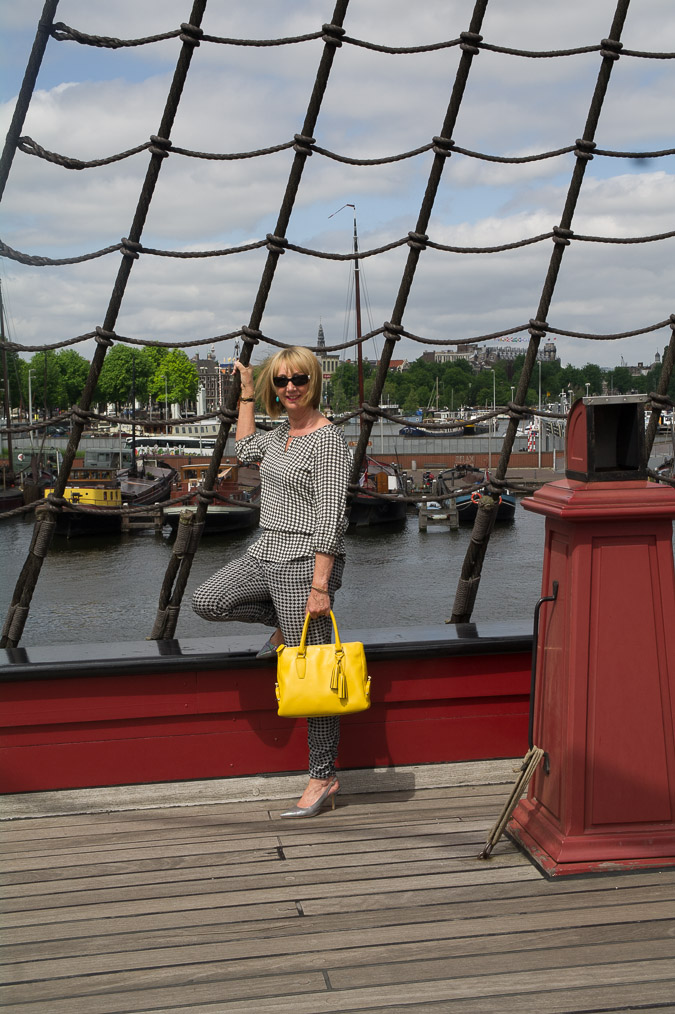 Below: inside, behind the captains quarters, was the dining area for officers (I imagine). We took a picture of three happy tourists, sitting down “for diner”. (Everything was glued to the table, no nicking cutlery.) 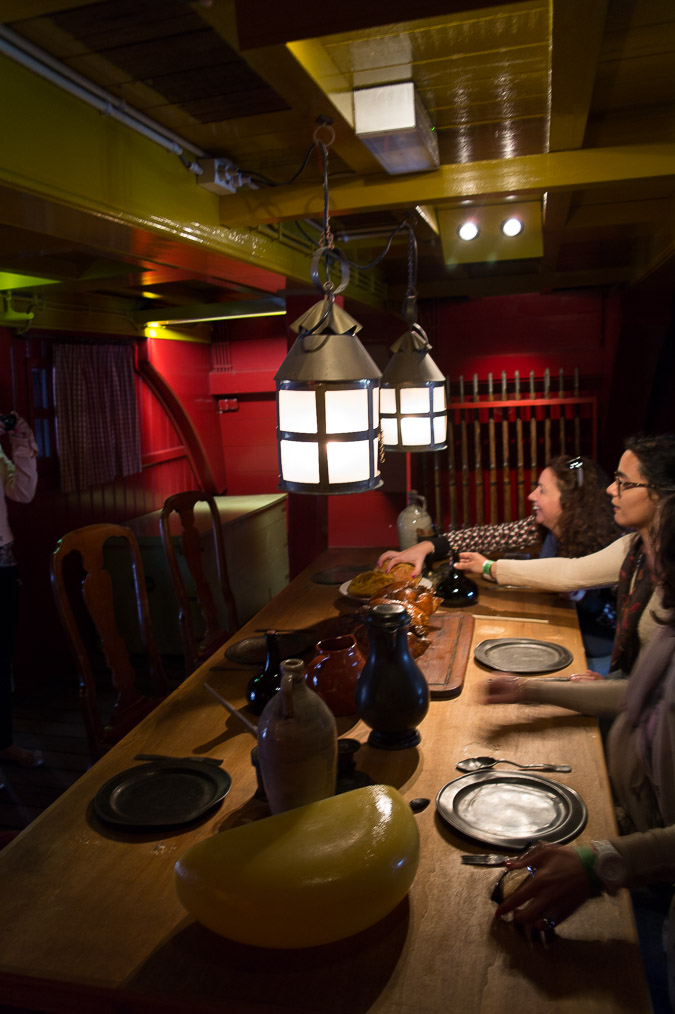 Below: Ron created a “Rembrandt”. Unfortunately not a flattering photo of me. 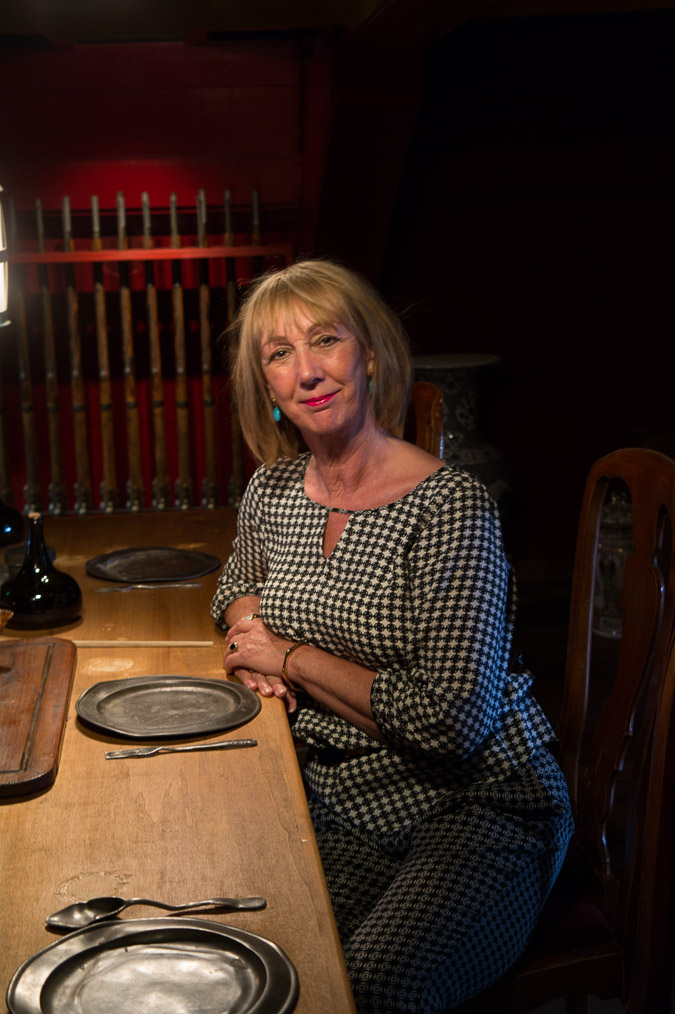 Below: the front of the ship. There is probably a better term for that… 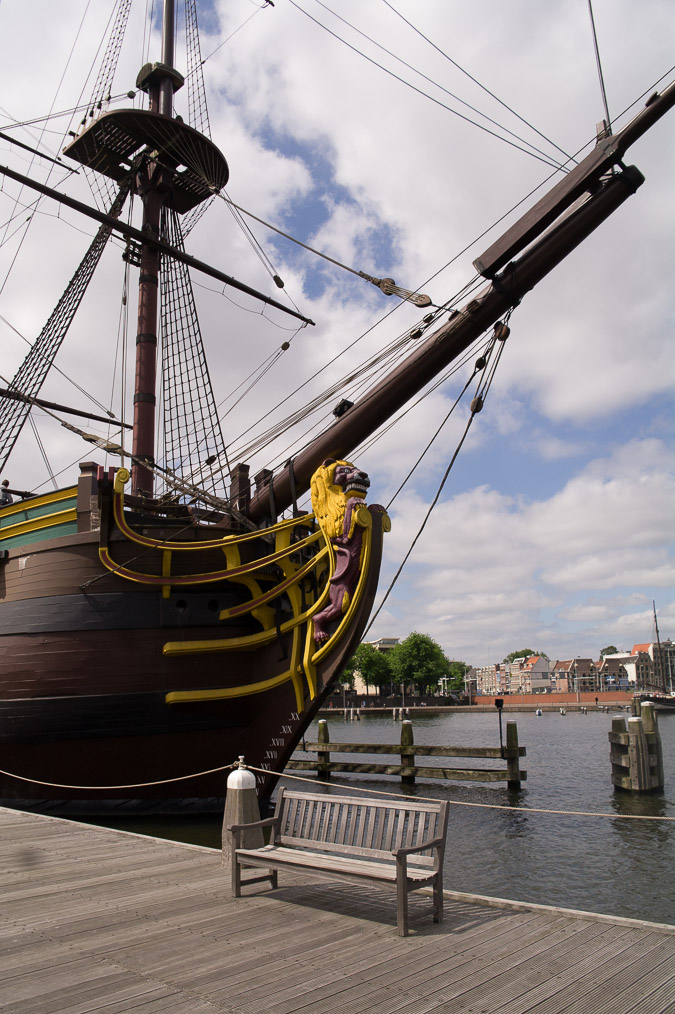 Below: the bridge of the ship. It was too dark to photograph inside, but I can tell you, people were a lot shorter in those days. It was like an English cottage:…”mind your head”. 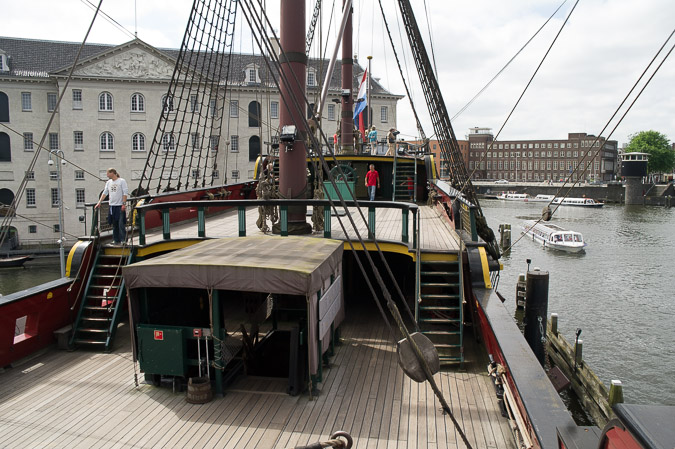 Below (and above): the back of the museum, where the ship is docked. 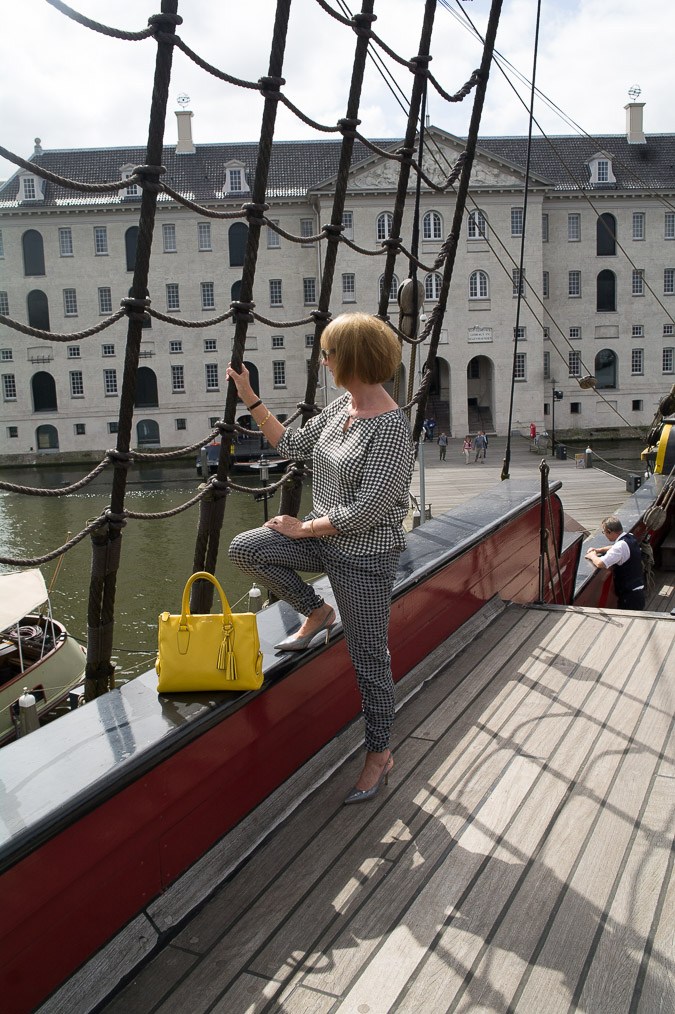 Below: the musuem used to be an arsenal, built in 1656 (they built it in 9 months… and made a point of mentioning this in the right stone). As a storehouse for the Admiralty of Amsterdam. 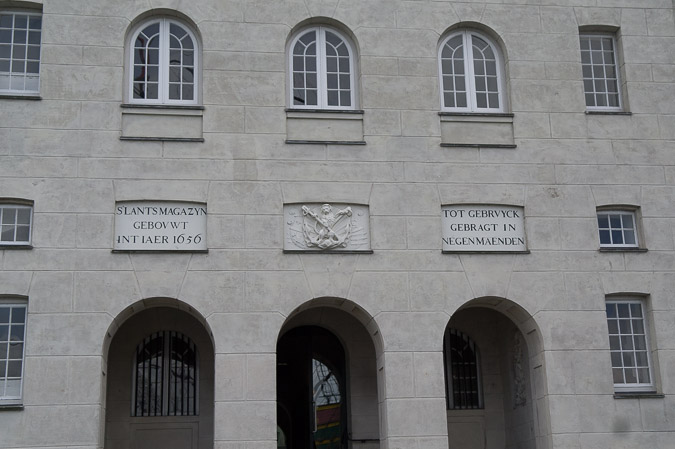 Below: in the museum you can find all sorts of maritime stories and examples. There was also an exhibition called The Dark Chapter. About the Dutch who were so keen to ship people from Africa as slaves. A very dark and shameful fact in our history. 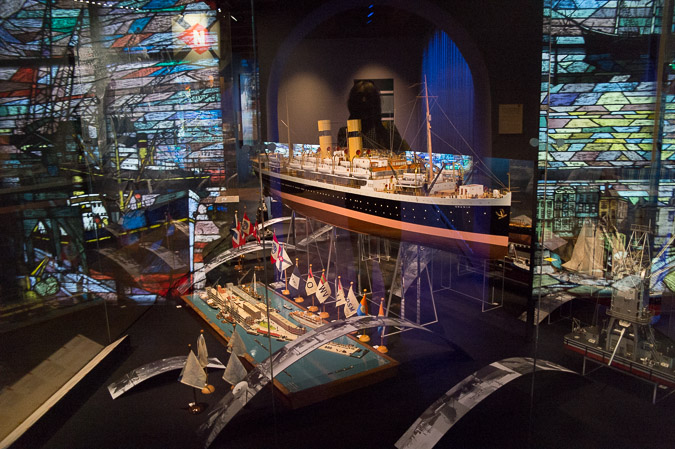 Below: I did not stop to listen to all the history stories in the museum itself. They have done their utmost to use modern media in exhibiting our maritime history. 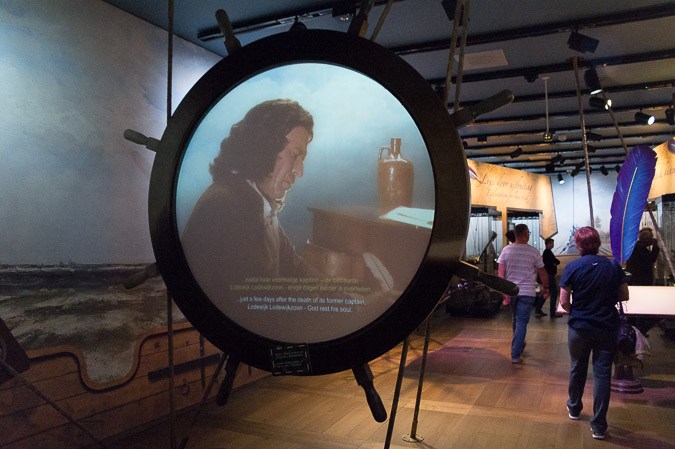 The next two weeks I will be on holiday. Trying to post but not knowing whether time will allow me. Visiting Barcelona for three days with my best friend Lia.

PS Linking up with the gathering of oh so many other bloggers at Visible Monday, hosted by Patti.