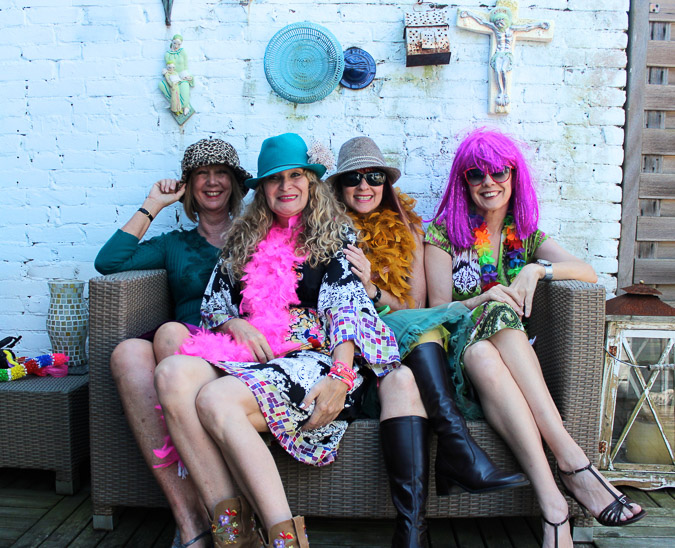 Things can go a bit crazy when you put four bloggers together who are mad about clothes. OK fair enough, this was not my idea; crazy Anja and Suzanne came up with it and I played along. Reluctantly, I will admit, as there wasn’t anything flattering for me in the clothes box, being a size larger than the other three. The photos in this bloggers get together part two, are taken mostly on the Saturday (see part one here). Taking advantage of the weather (and my husband), we went for a boat cruise through Amsterdam. Always fun.

But let’s start with a few days earlier, when we had dinner in Anja’s garden. Suzanne had whipped up a delicious salad with cheese and strawberries and whatyounots. She made us a different salad a few days later and a chocolate /avocado mousse as desert. Man… that girl can cook. I would keep her on just for that. 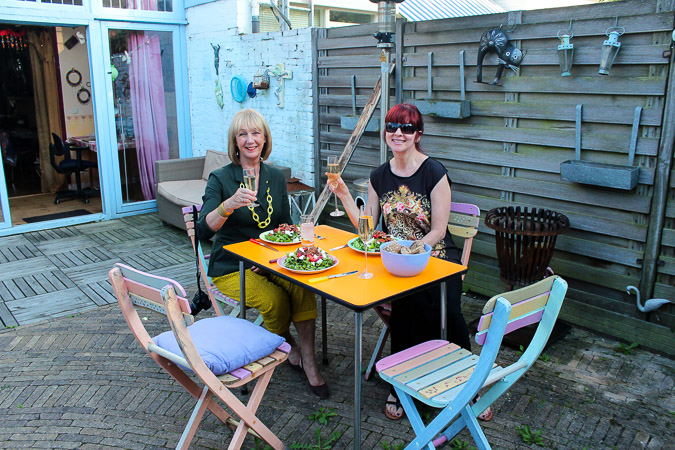 Below: OK, another crazy photo, with moustaches this time. Don’t ask me why, just for fun. 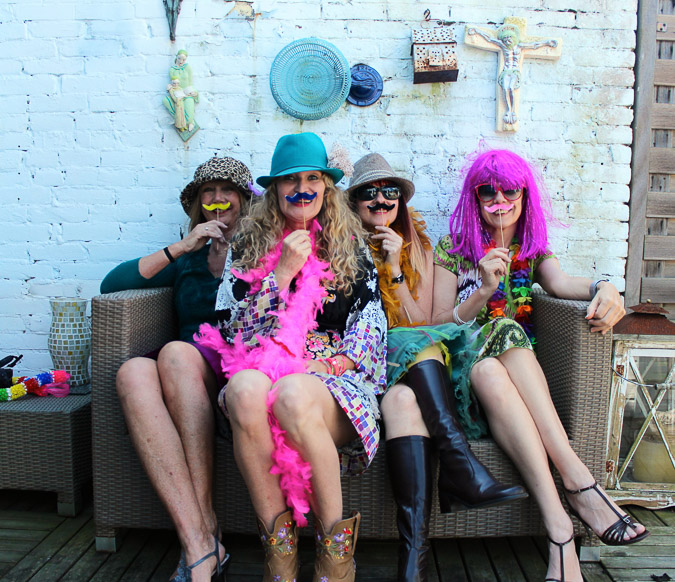 The photo sessions with other dresses and wigs, turned out especially good for Sylvia. Anja and Suzanne wanted to see what Sylvia would look like in Anja’s clothes. I can tell you: very good, but I will leave it to Sylvia to post that on her own blog (40+Style). We hurried to clear everything up (clothes everywhere..!!!) and drove to Amsterdam, where my sweet husband Ron was waiting for us with his boat. Luckily we had so much better weather than a couple of weeks before, when Ron did the same for Daniela of the Pretty Cute (see post about her visit here).

Below: what do bloggers do when they get together? They all bring their cameras and they take pictures. All of the time. “Now with my camera….”. Asking strangers: “Sir… can you take a picture of the four of us? Yes please, with all four cameras”. Actually, that last request, we only dared asking Ron. 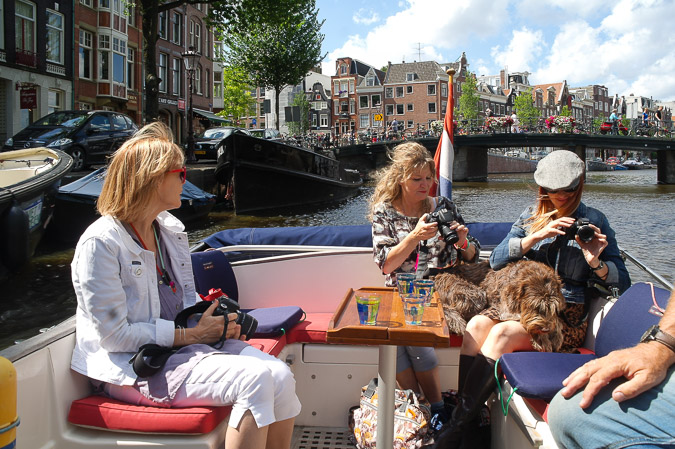 Below: here is Ron, the captain. 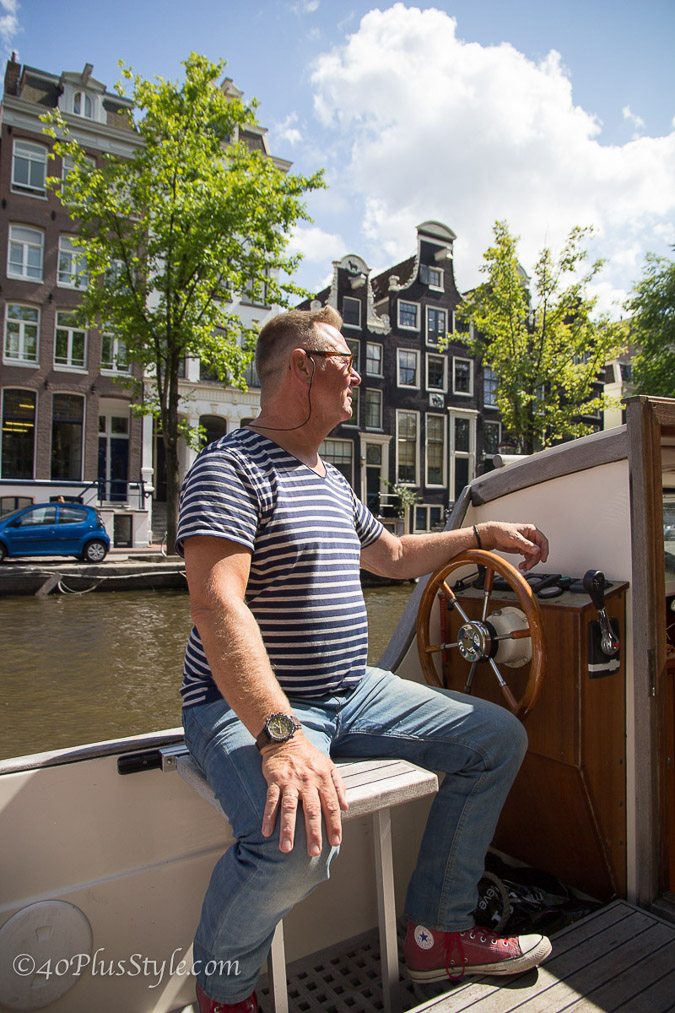 Below: Suzanne gave him a peck on the cheek as a thank you for cruising us around Amsterdam. Don’t worry, it was just a small peck and we were all supervising. 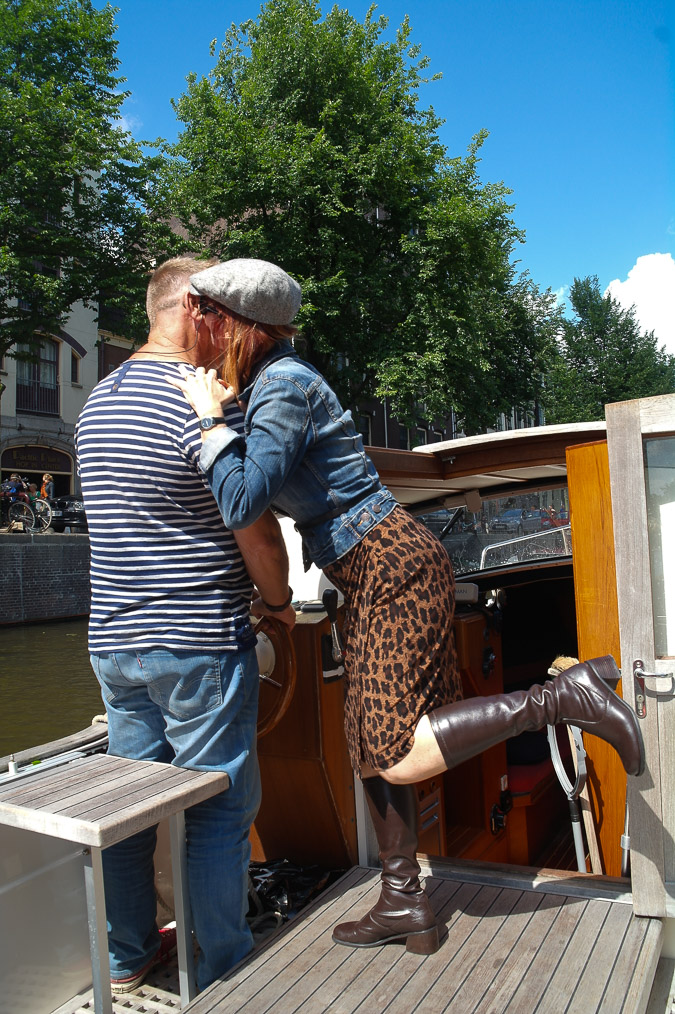 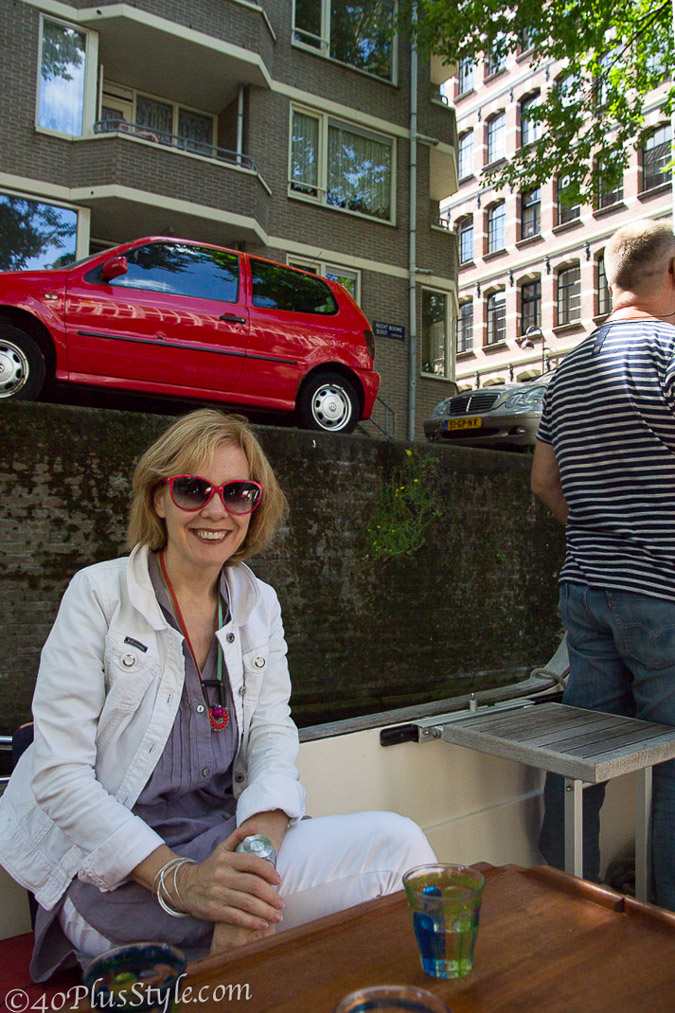 Below: dog Charlie doesn’t like cruising with the boat (poor Ron), so she spent the whole trip on our lap, mostly Anja’s lap, being cuddled all the time. 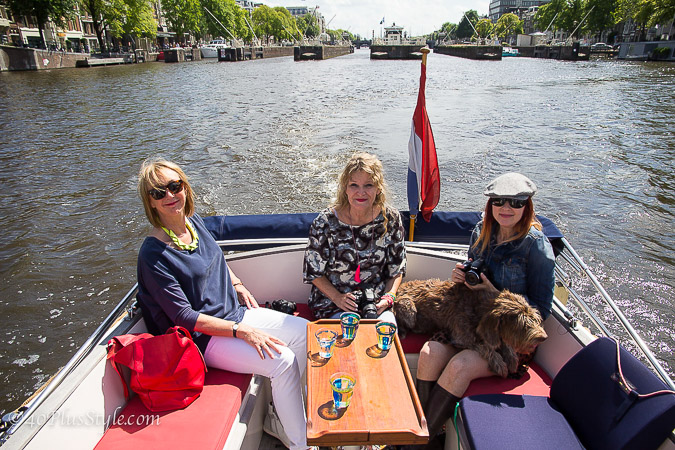 Below: now for some views of Amsterdam… to start with, the Amstel (the big water way Amsterdam was named after). 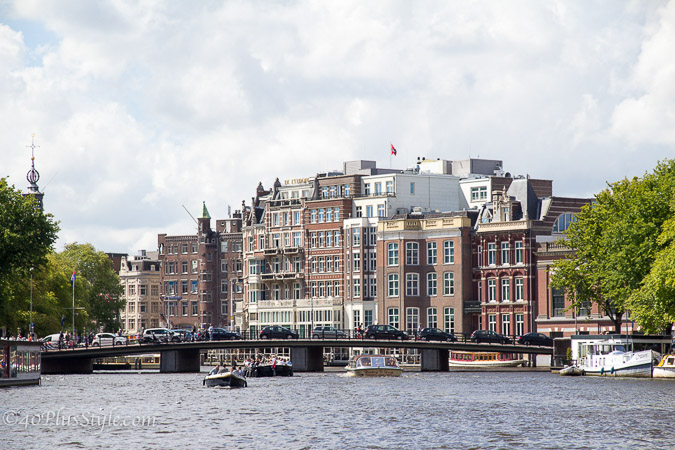 Below: no idea where this is. It is one of the big canals. Could be Prinsengracht, Keizersgracht, Herengracht. They are all this pretty. 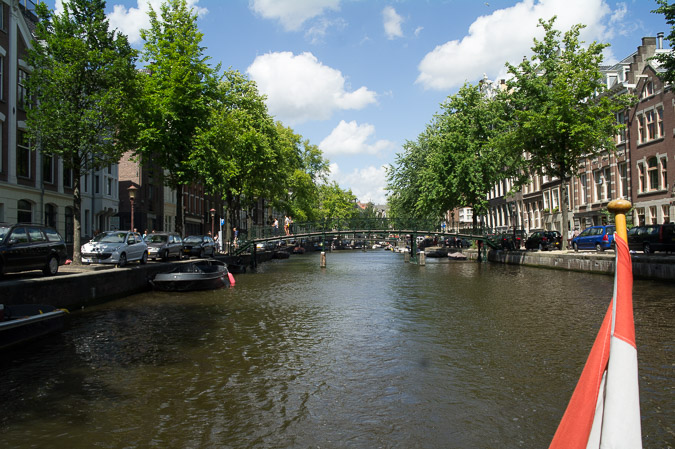 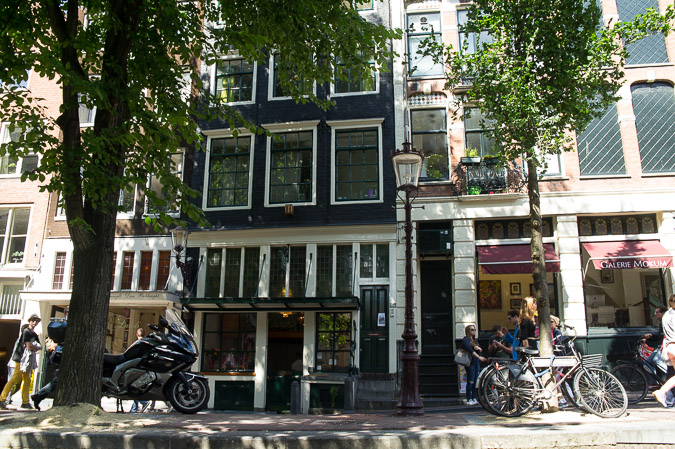 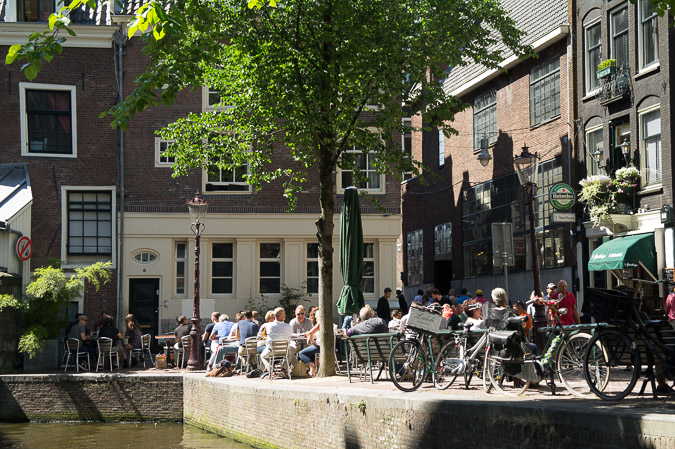 Below: there are many, many batchelor parties going on in Amsterdam. I bet you this young man is going to be married within a week. 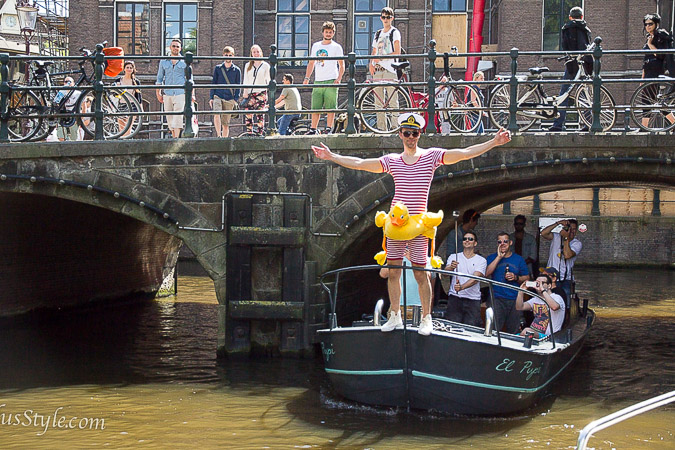 Below: we cruised a little bit in the red light district but didn’t take any pictures (best not…if you know what I mean). but it is a pretty area. A bit like Venice. 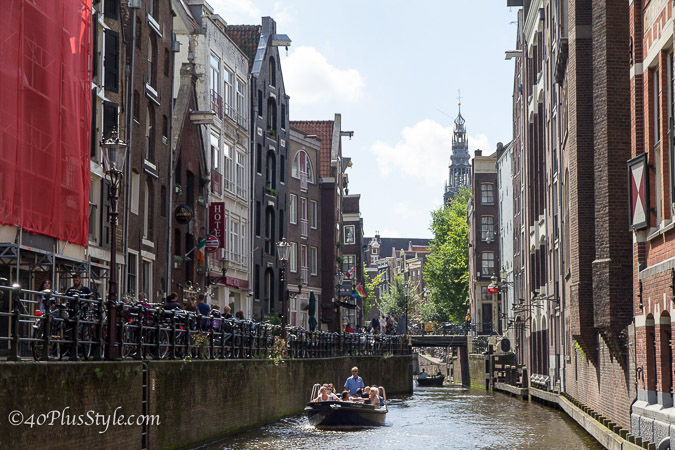 Below: then Ron dropped us off at Prinsengracht, where we climed up the quay and did some salad shopping at the Lindengracht market. Suzanne is picking out the ingredients for the Sunday meal. Small detail… we lost half the shopping as we were talking too much and didn’t pay enough attention on how many bags we were supposed to have…. 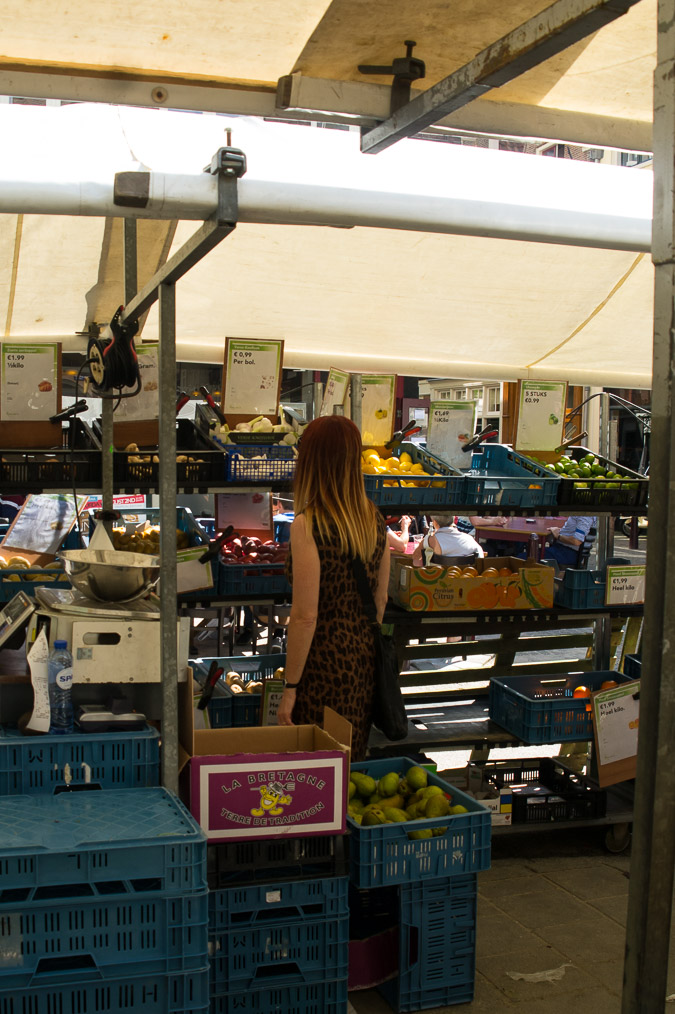 Below: we probably left the shopping at Winkel, corner of Westerstraat and Noordermarkt, where they have the best apple cake. Sylvia and I shared one and divided it in two to be sure neither of us ate more (remember Dan? I told them your joke). The necklace I am wearing was a present from Sylvia. 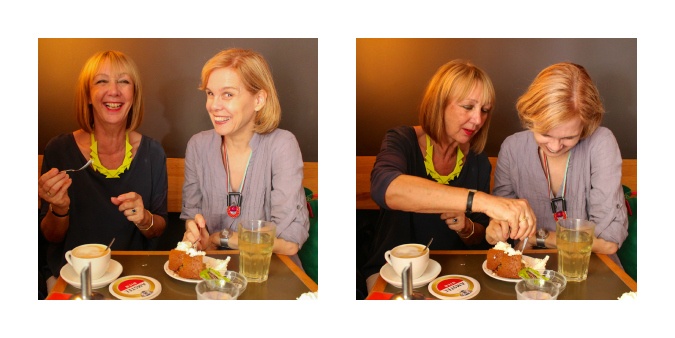 Below: talking about necklaces…. these two were gifts from Suzanne. She made them herself. I can highly recommend having other bloggers over. It pays off  hahaha. 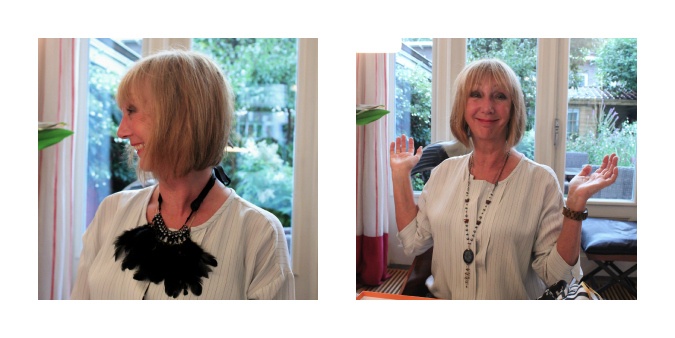 Below: after the shopping we got back on board and Ron took us to a restaurant, Pont 13, which is in a former ferry boat.As I said, Ron had to take pictures of us with four cameras. There was a lot of metal in the restaurant. Which figures as it was a boat, but that is pretty bad for the acoustic. The menu was small but the food excellent. Really good. 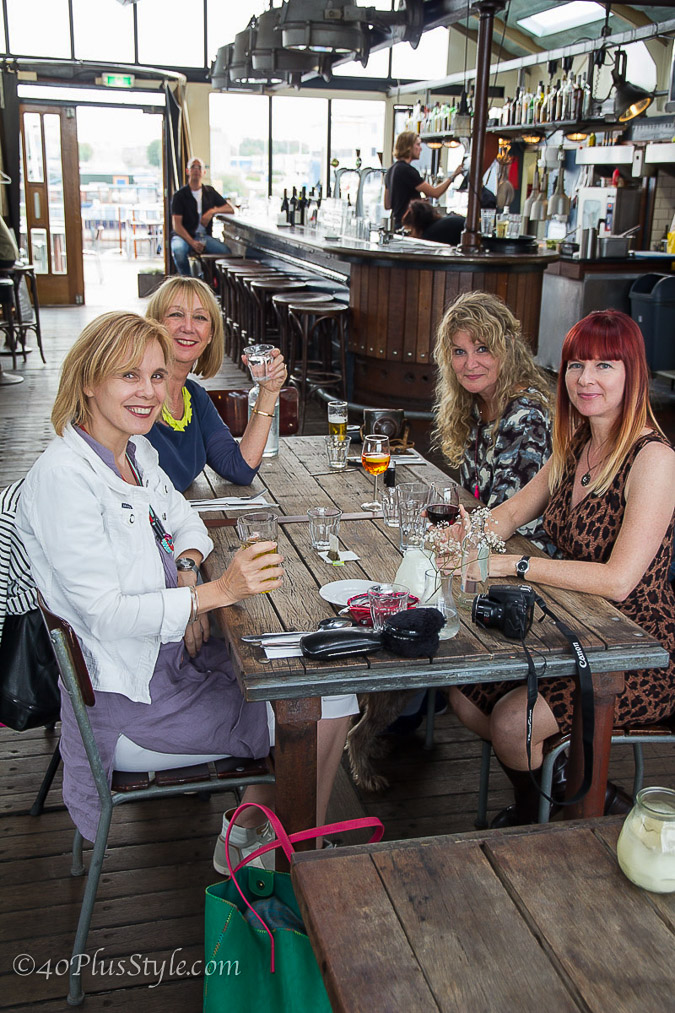 Below: my camera was clearly focussing on the thing behind Sylvia. 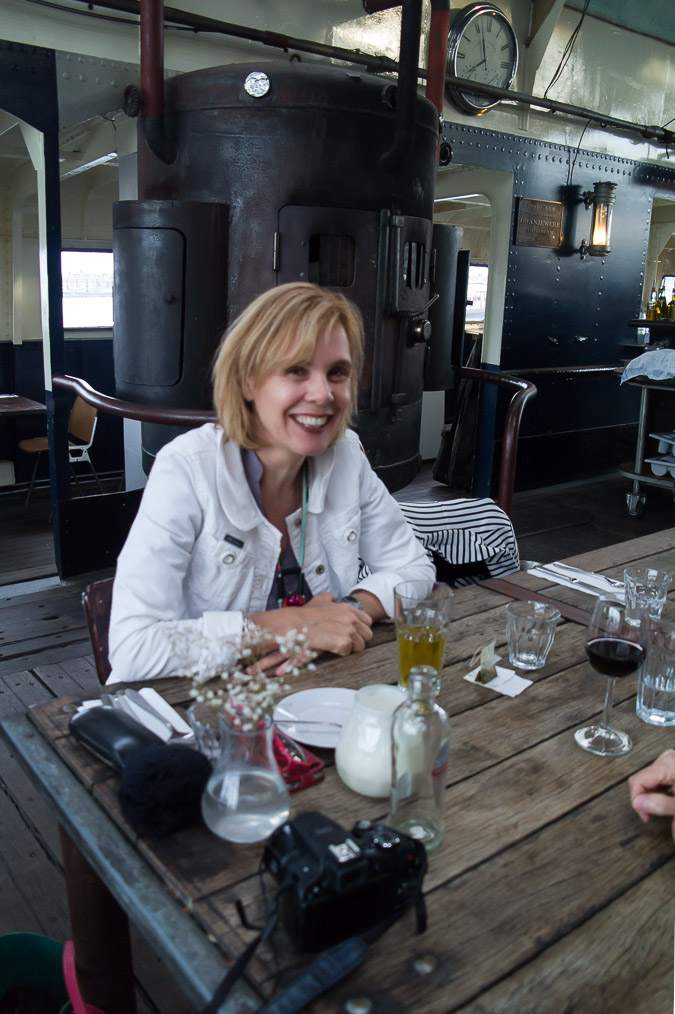 Below: Sylvia and me goofing around.

Below: on our way home we had to put on a jacket. 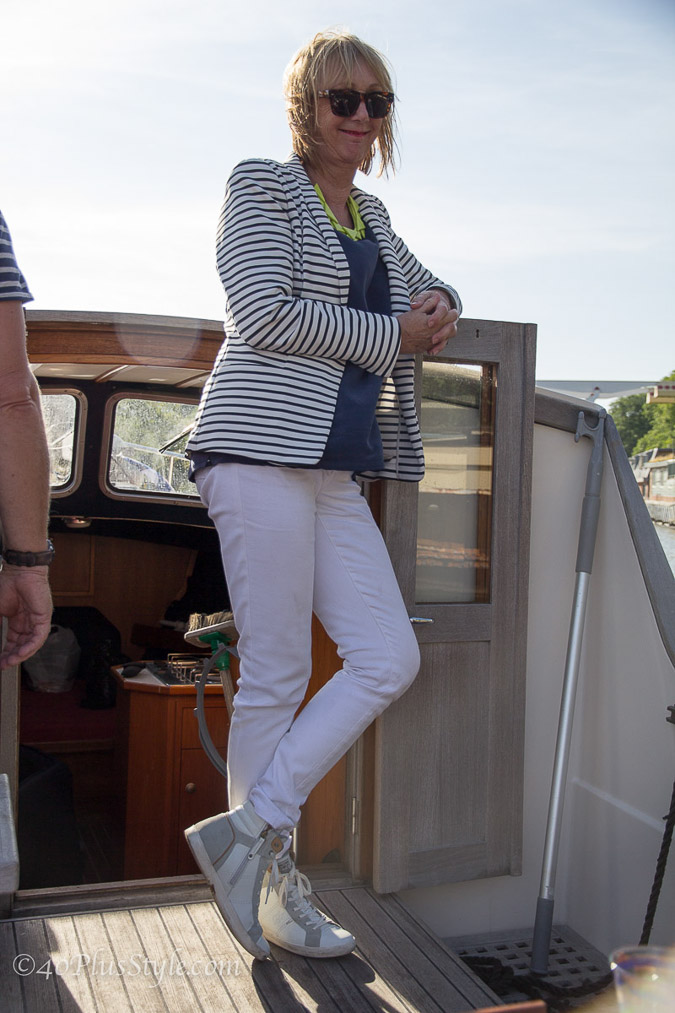 The next day, Sunday, the weather was unpredictable, so we all went to a museum: Stedelijk Museum in Amsterdam. Well worth the visit.

Below: we started taking pictures outside where we had lovely backgrounds. Me, Anja and Suzanne. 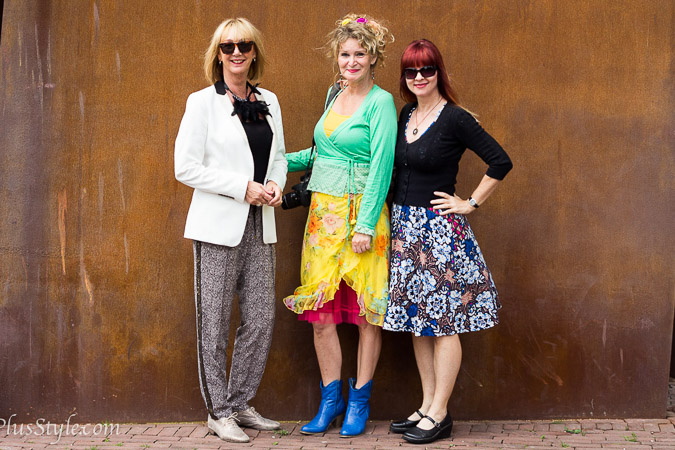 Below: for fear of lawsuits I will not publish too many pictures of the art. But we couldn’t resist this: a black and white art work (forgive me… I don’t know the artist), and me, dressed in black and white. 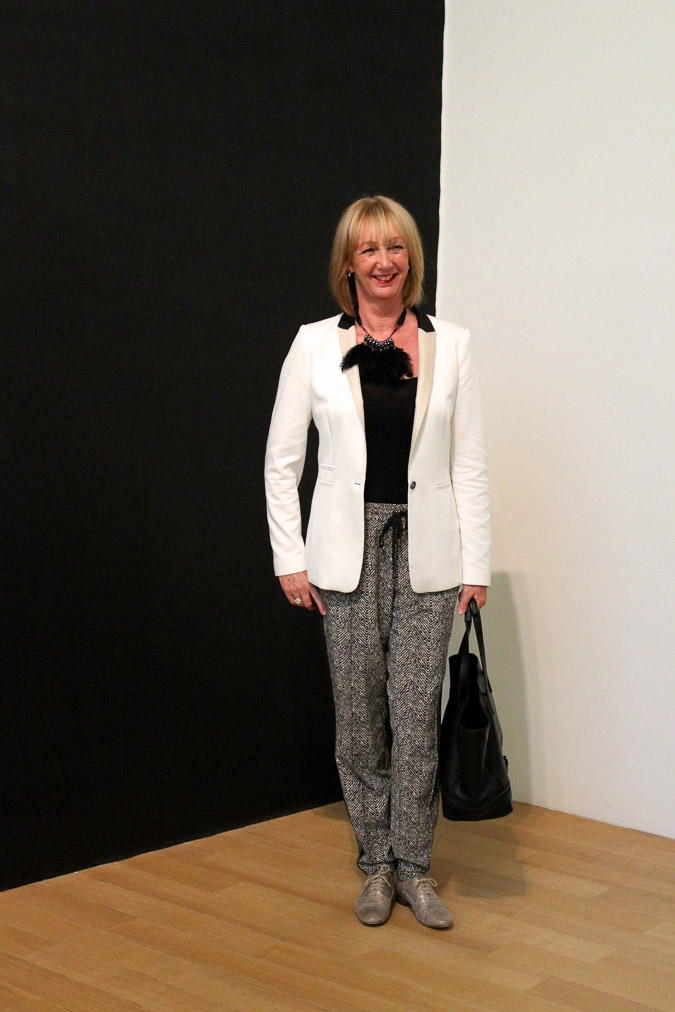 Below: this is a mural by Karel Appel. Me, Sylvia and Suzanne. 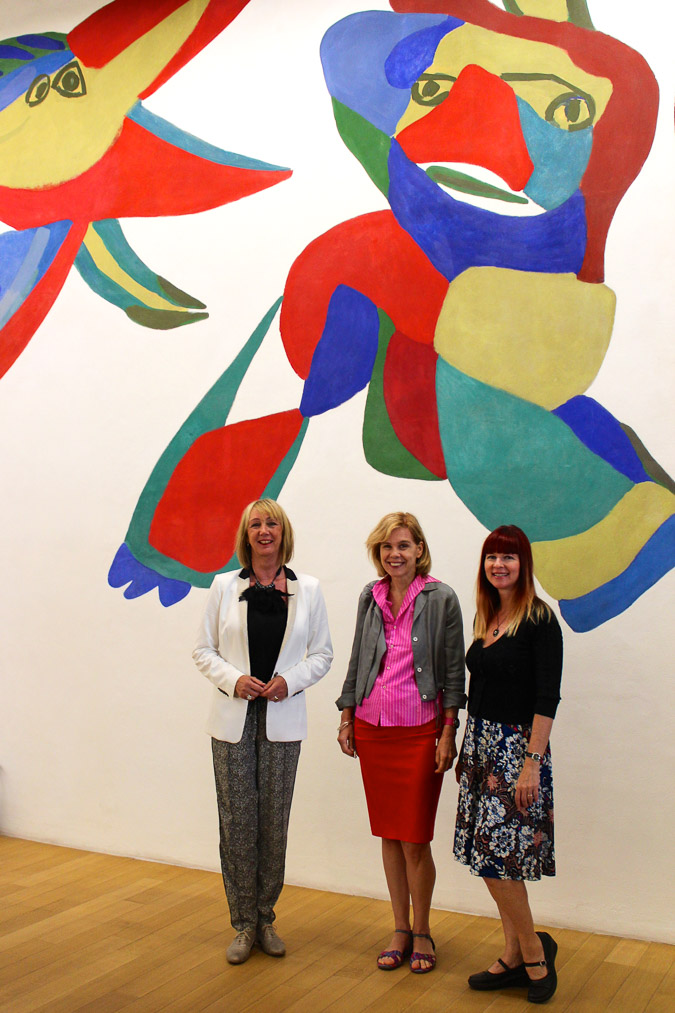 Well fooks… that is the end of the bloggers getting together. Hope you enjoyed it.

Some photos were taken by me, some by Anja of the blog Curly Traveller en some by Sylvia of 40+Style. I have no photos yet of Suzanne (of Suzanne Carillo Style Files) who lost her suitcase on the way back to Canada. I just learned yesterday that she has it back..  what a relief. The camera and new clothes were in it.

Next week the start of a new series: Street Style women over 40.