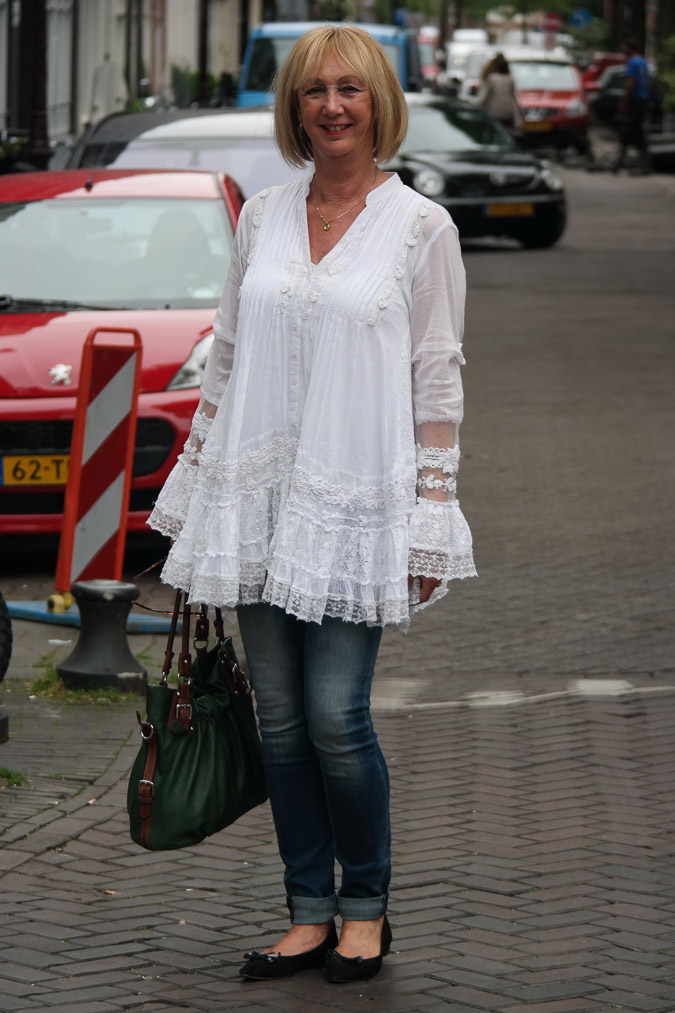 When you are in Spain, near Ibiza, you come across Ibiza type clothes. “And….”, as my neighbour said, as she saw me in this blouse, “….being on holiday you buy things that are less appealing when you are back home”. Clearly she was not a fan of my white boho blouse. Neither is my husband Ron. When I showed him my new treasure he just laughed. And I could see in his eyes what he was thinking…: “from which large window did you yank those curtains?”. Nevertheless he once again took these photos. Bless him.

I don’t care what they say or think. I ADORE it. I might look like a middle aged hippie, I might look ridiculous… I love it. I never had a wedding dress and that left a scar (long story; boring). You can be as honest as you like in your comments.

Below: we went to Amsterdam to the Gerard Doustraat as our daily paper said that this area was upcoming, hip and happening with lots of nice new shops. Time to investigate. The area is lovely anyway, near the Albert  Cuyp market. Lively neighbourhood. 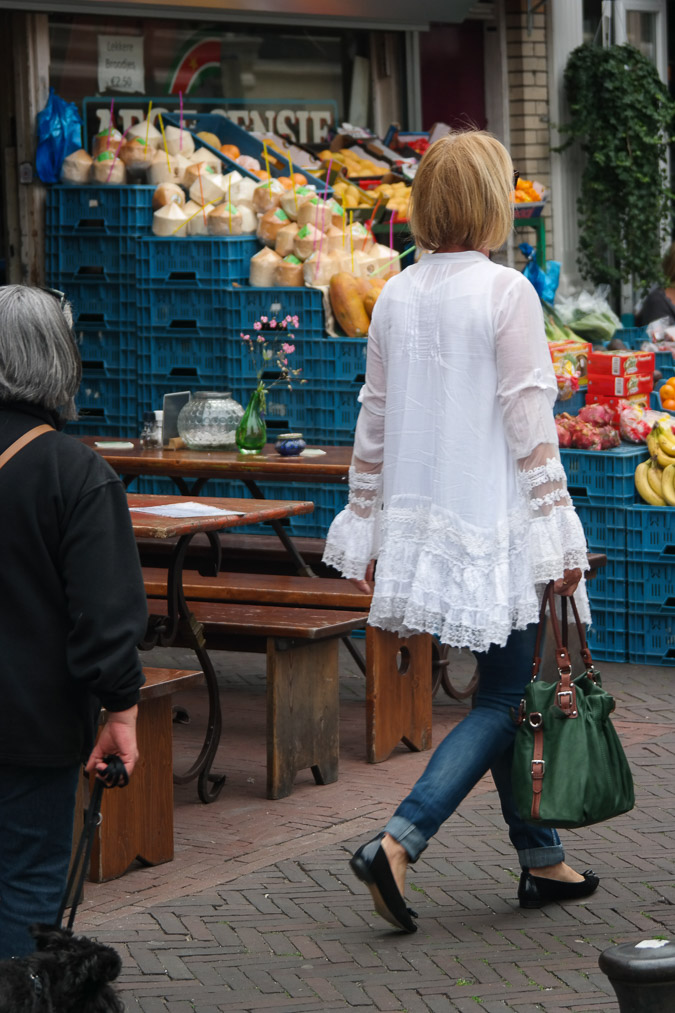 Below: there were indeed quite a few nice shops but I think I was satiated with clothes (is that possible??? No… just a temporary lapse). 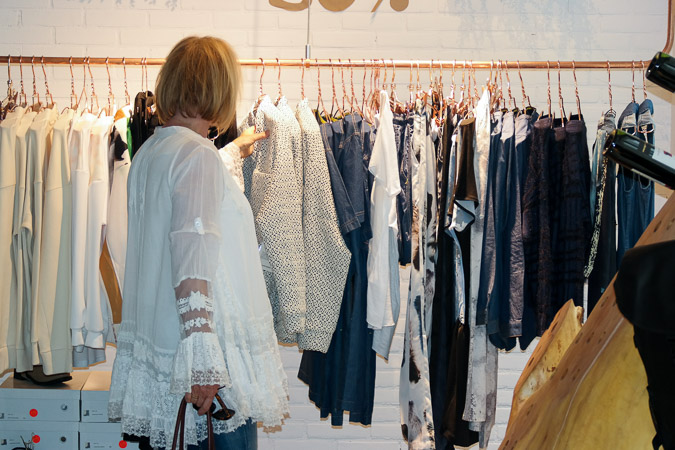 Below: I love it when Ron takes a pictures when I walk. They always turn out nice, although I looks rather arrogant (= my normal look). 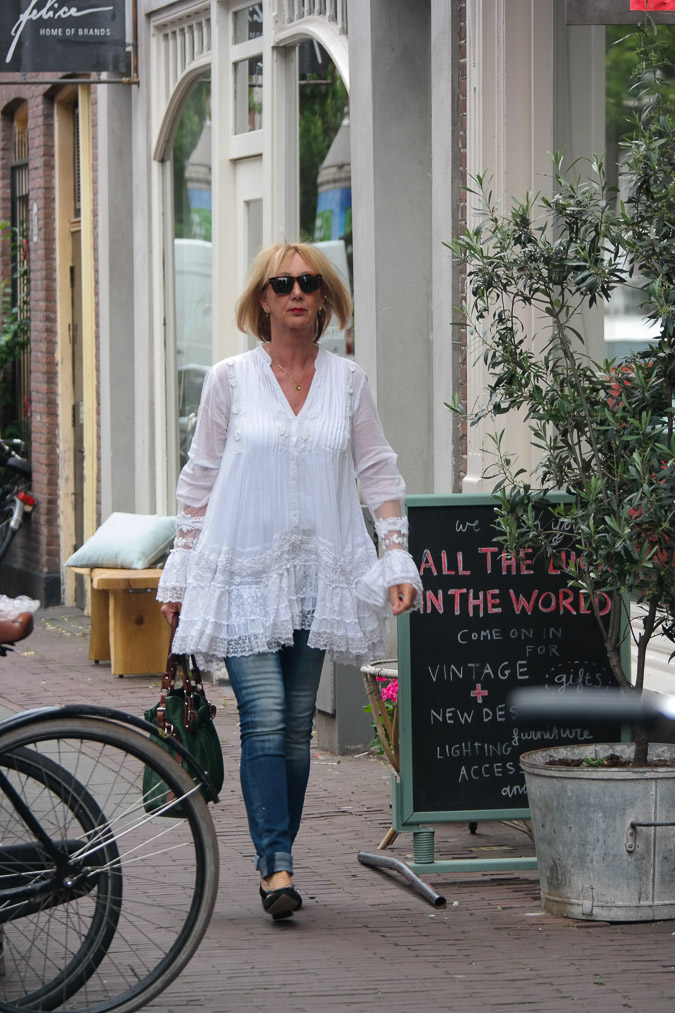 Below: as usual bicycles everywhere. Beware of cyclists in The Netherlands. They never watch out. 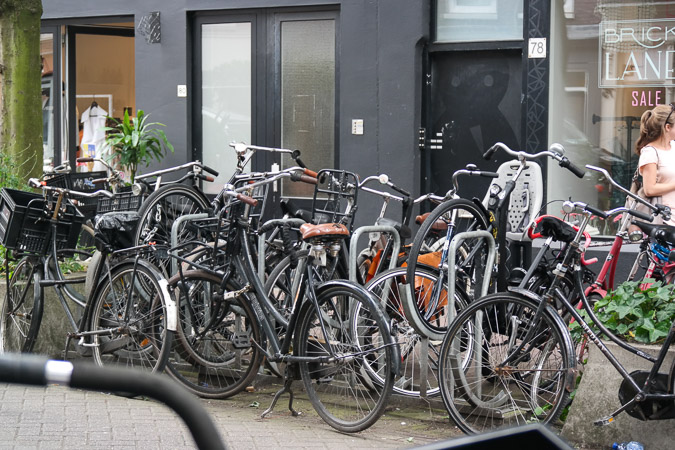 Below: this charming lady started a conversation by saying she loved my blouse. She told me her life and love story in three minutes. Which I thought was very well done. Quickly to the point. She was nice. 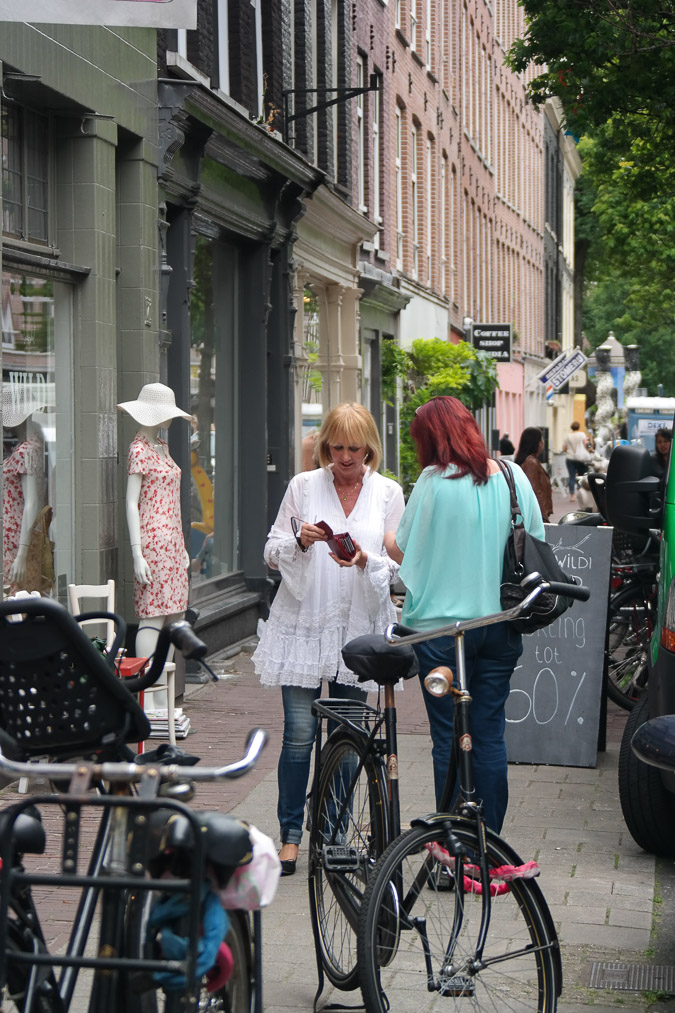 Below: we both agreed that leaving Amsterdam to live somewhere else is a mistake. Though I love where I live, I do miss Amsterdam very much. Of course I handed her my blogcard. Never miss a chance to attract a new reader… 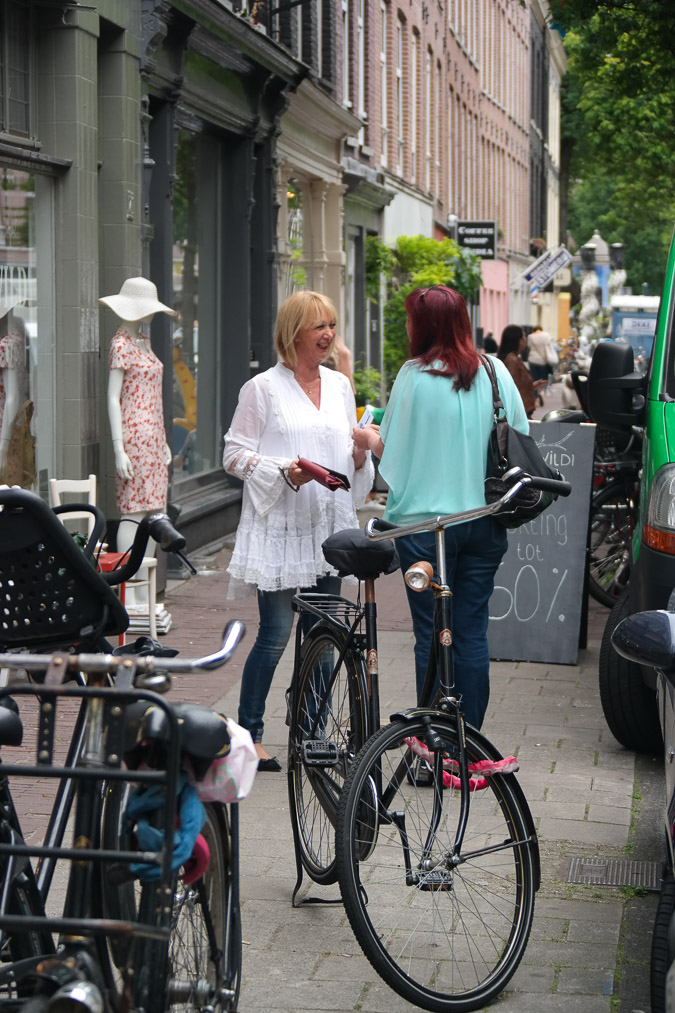 Below: time for cappuccino on a terrace. Ron made close-ups all the time but thought I was too static, so he threw a beermat at my head. That made me laugh but alas those photos weren’t nice. 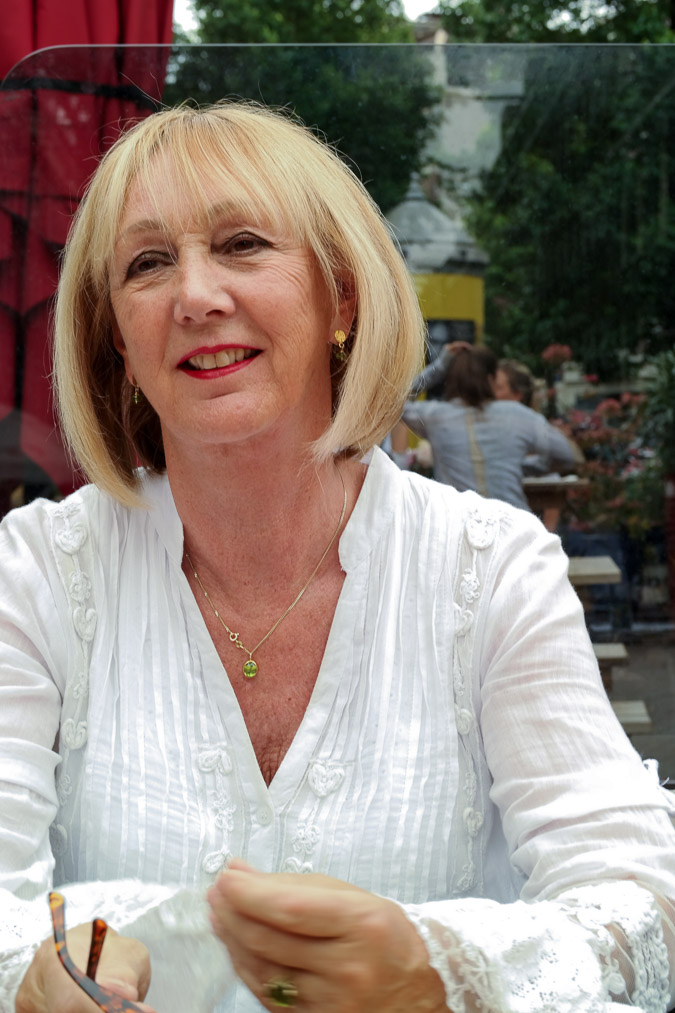 Below: jewellery: peridot ring and small pendant, matching earrings (see photo above). And my new wedding ring with little black pearls. I might have gained a lot of wrinkles through the years, but fortunately I gained jewellery as well LOL. Compensation fooks. 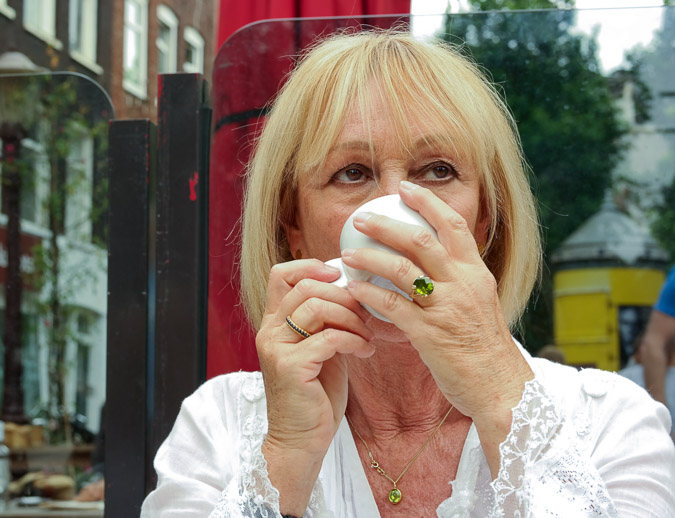 Below: my pointed black suede ballerina’s with blue bow. Very comfortable and they hold my support soles. 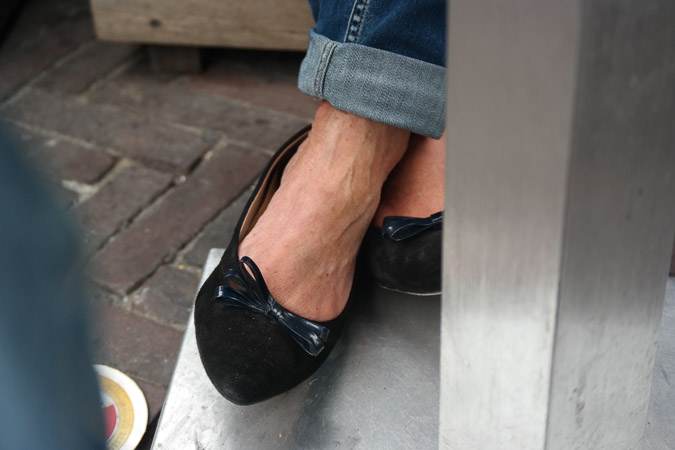 Below: showing the width. 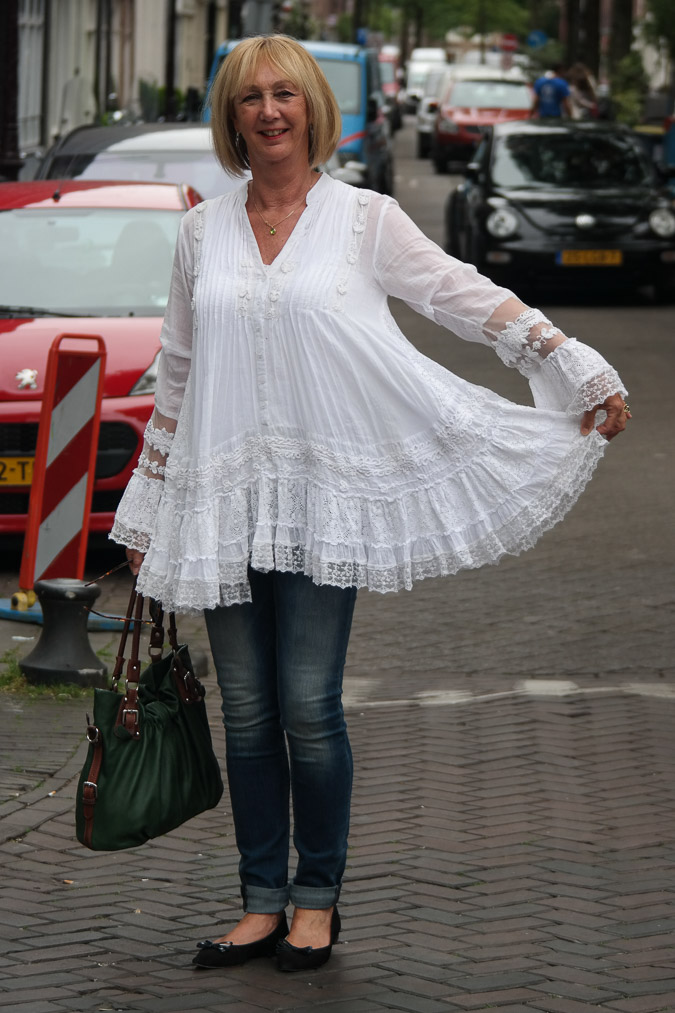 Below: as a I was standing on a corner waiting to cross, this lady in the Volkswagen Beetle stopped. 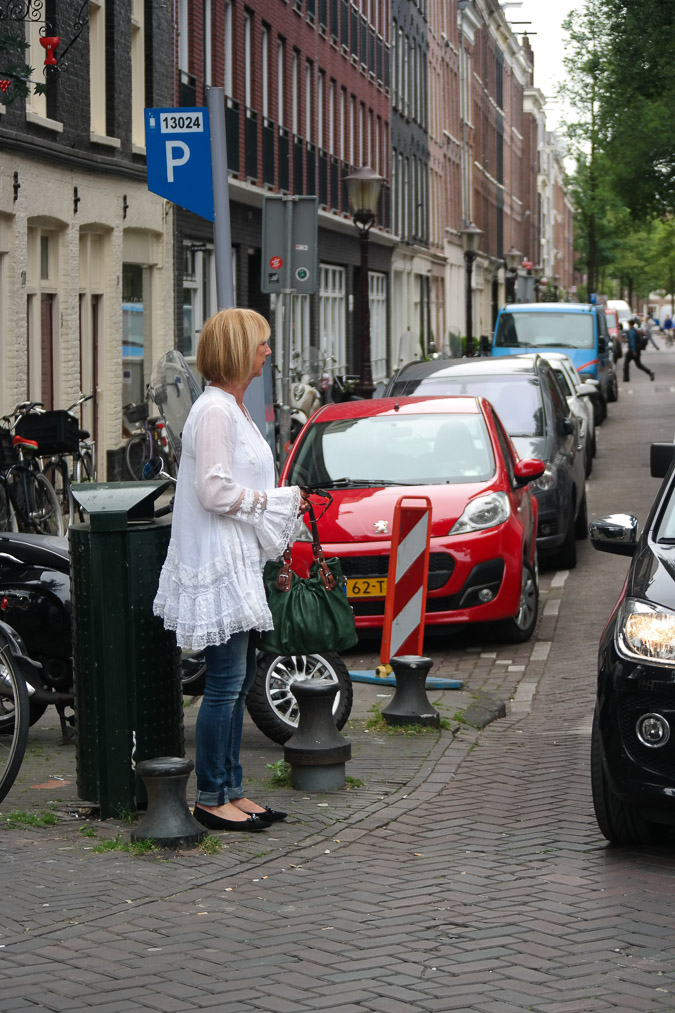 Below:  she opened her window to compliment me, which led to a joyful conversation. Leave it to me to talk to strangers. I love it. Forgot to give her my blogcard. Darned. Missed a chance. 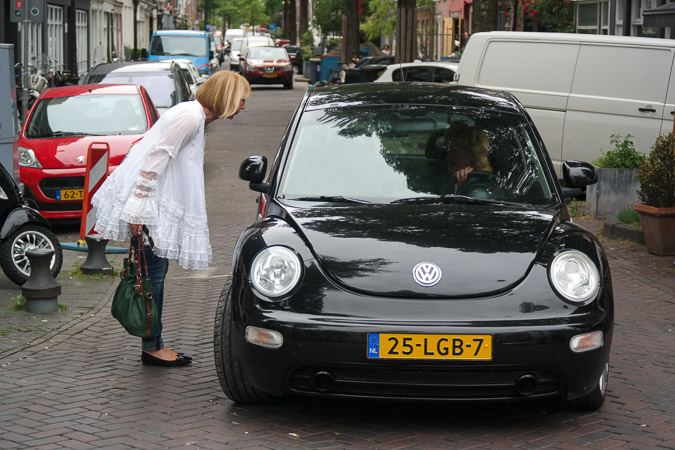 Below: as we were driving home, we saw a little market at Minervaplein. We tried for a bokeh photo. Nearly good. And we found out another mistake we were making with the camera. You live and learn. 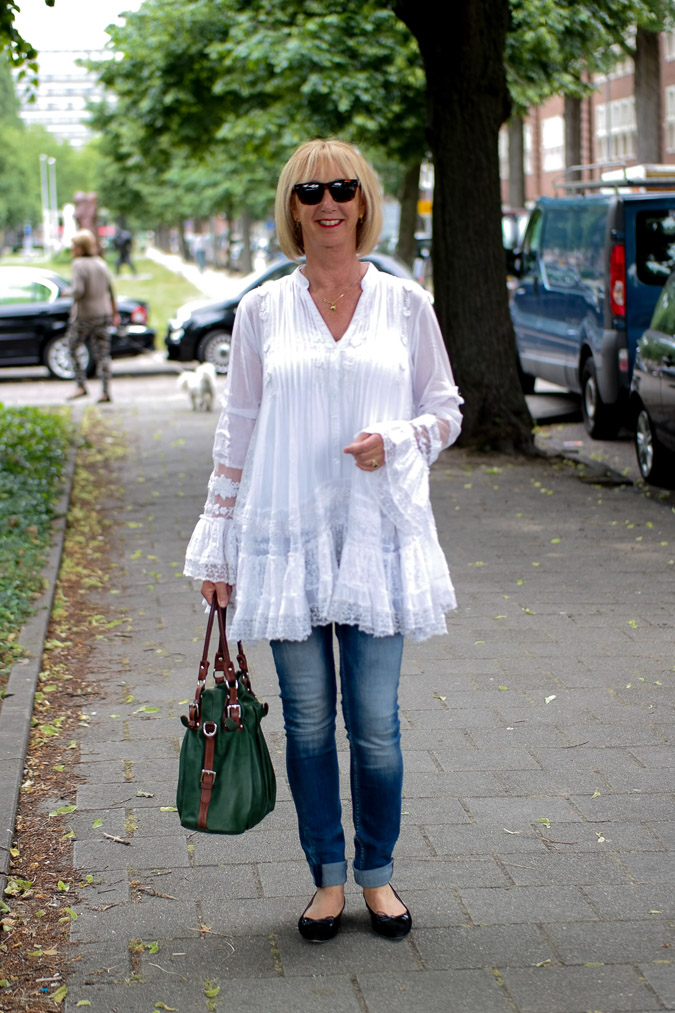 Below: a little traveling van with really good cappuccino. 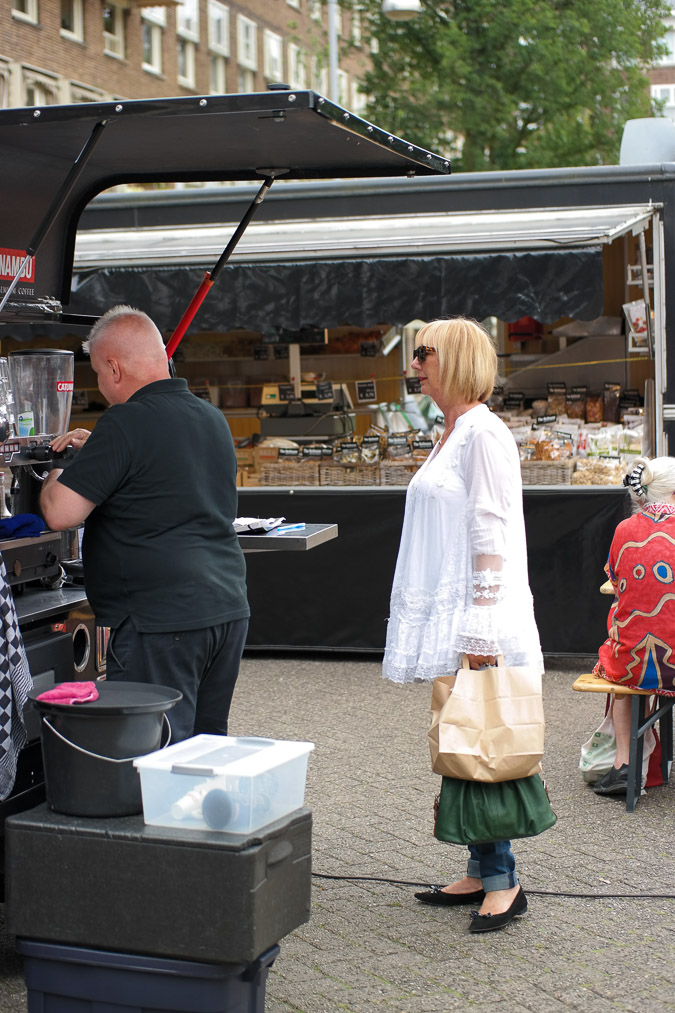 Below: there were nuts, bread, vegetables, fruit, raw food bonbons (don’t ask me what that is, but it tasted nice. Not like chocolate though.) 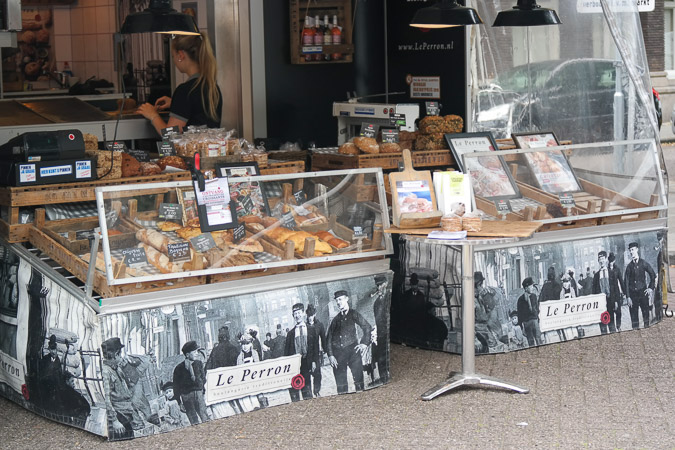 Below: and there were chickens… from Madame Poulet. She only buys free range chickens who had a good and longer life. Hence they are juicier. Seasoned with her herbs, they are delicious. So much better than normal chickens. 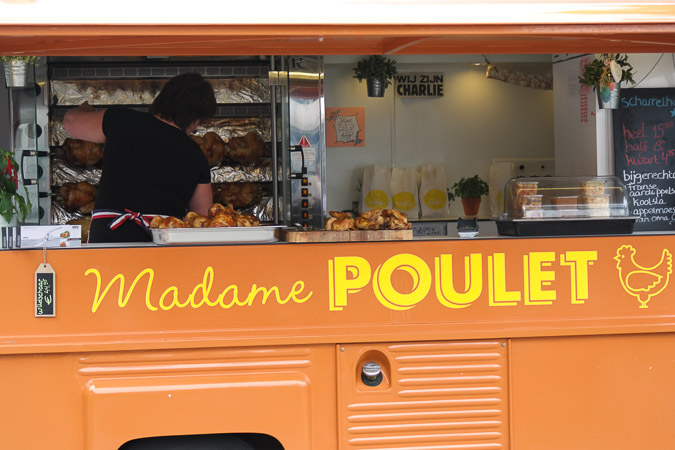 Below: see???? Don’t they look yummy? Guess what we had for dinner that evening…. Right!! Chicken. (The Dutch can Google where to get them.) 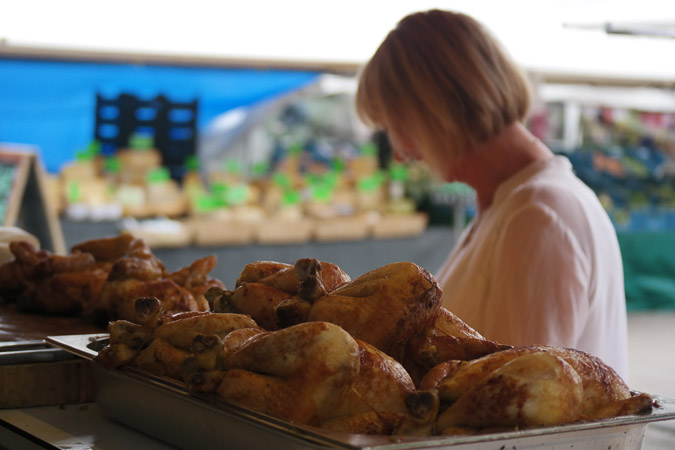 Hello Greetje,
I was wandering around Sag Harbor today and I came across a very expensive store. In the store window was your blouse (I am including a photo). I went inside and inquired and she said it was made for her in Europe. The cost was $420. Also she said (get this), that the editor of Harpers Bazaar was recently seen in the Hamptons wearing this very same blouse.
Tell that to the naysayers!
X Elle

(I thought it was hilarious. I am all of a sudden as trendy as an editor of Harpers Bazaar and I paid € 138.-. “It was made for her in Europe”, my foot. You can get them by the dozen.) 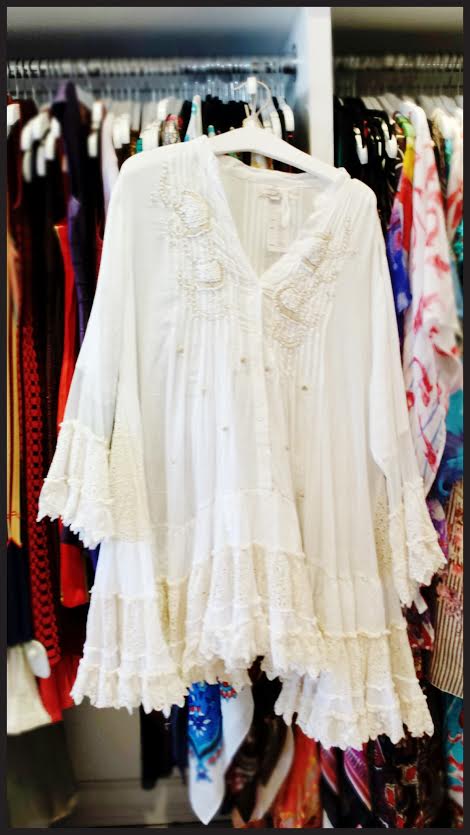