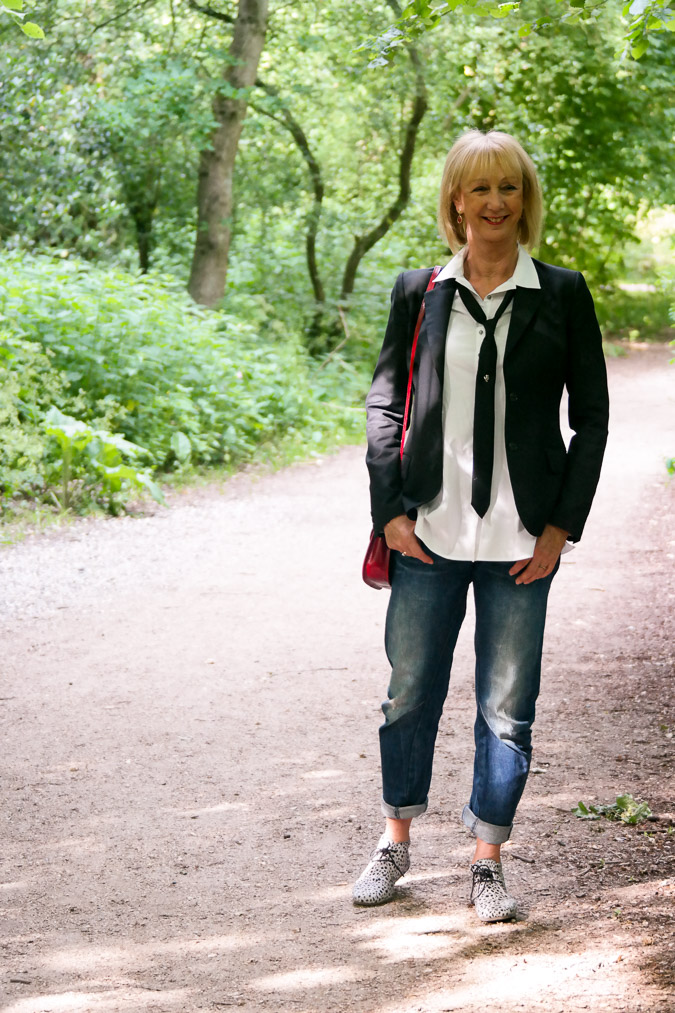 After a few more ladylike posts, I am “treating” you to this casual outfit. My husband Ron said when he saw it: “You are dressed like Charlie Chaplin”. Thank you darling. Fortunately he added: “But I like it”. I know this outfit will not appeal to everyone (anyone?). You don’t have to say you like it in your comments. I know a lot of you will not and that is OK. You can say that as well. I won’t be offended. The outfit came about when I had bought the extremely comfortable shoes. I suddenly remembered a Street Style photo I took of a woman which I thought looked different and very good. I will show you.

Below: this is the woman I am talking about. 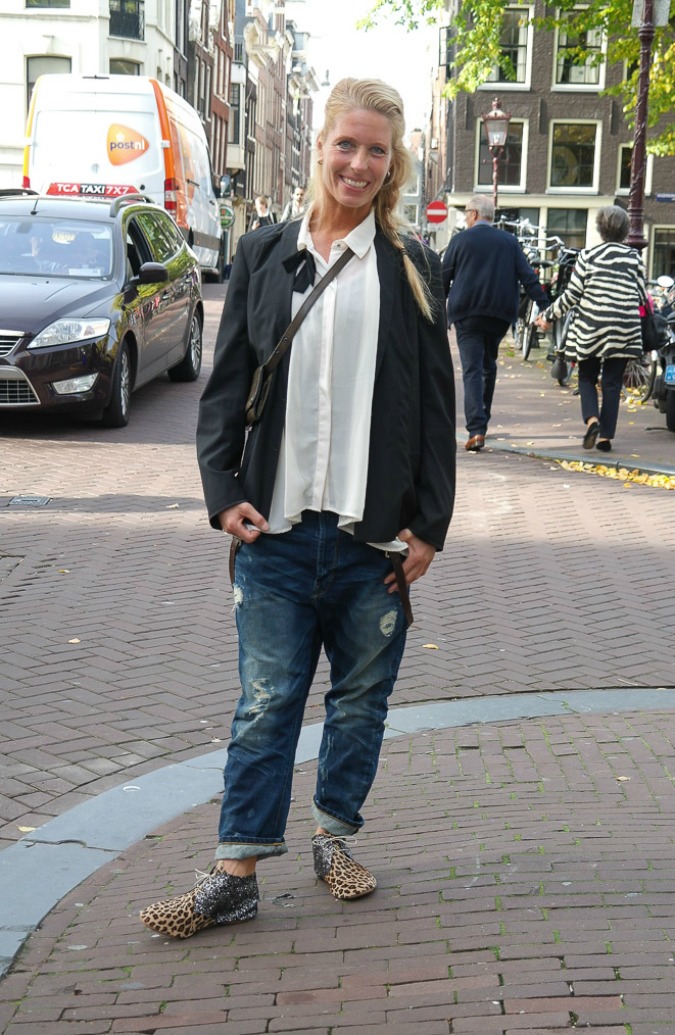 When I got home from the office (yes I went to work, dressed like this), I asked Ron to take pictures as I needed them for this blogpost and there was little time left (I am on holiday in Spain). Ron got up, grabbed the camera and we went to the Haarlemmerhout, the oldest public park of The Netherlands.

Below: great houses surrounding the park (of course). 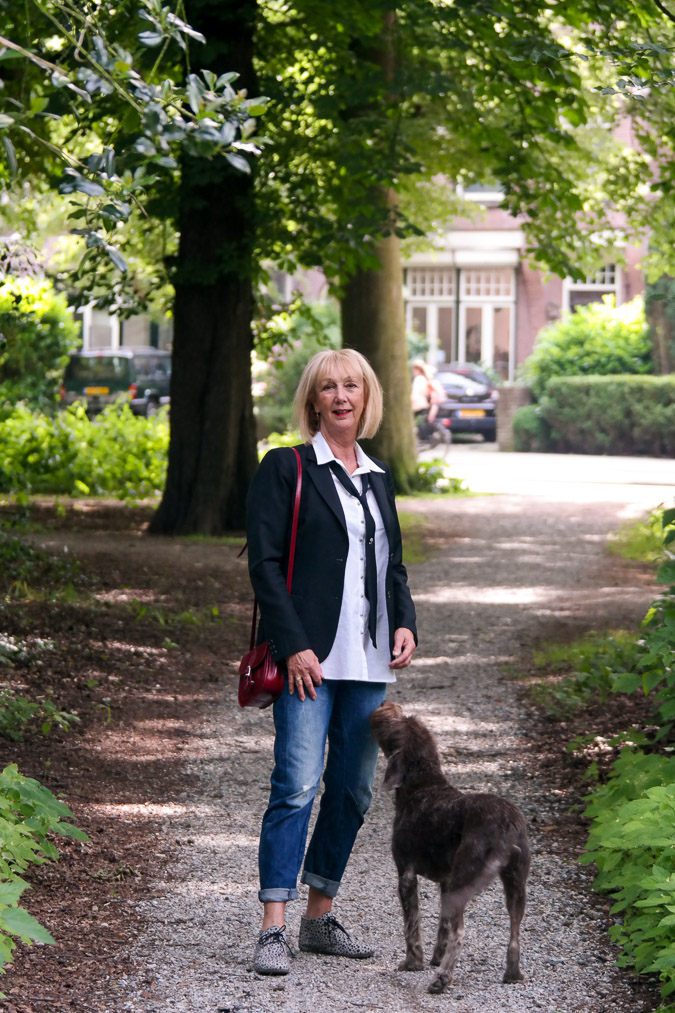 Below: Charlie was very pleased with yet another hour of fun in a park. 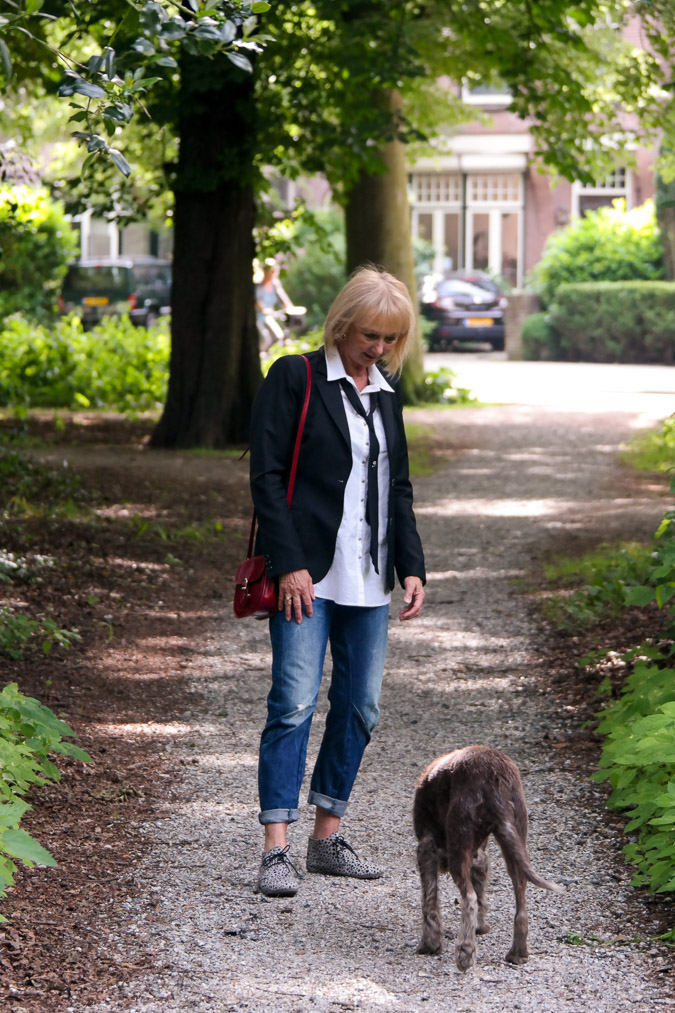 Below: it was lovely weather and everything was sooooo green. 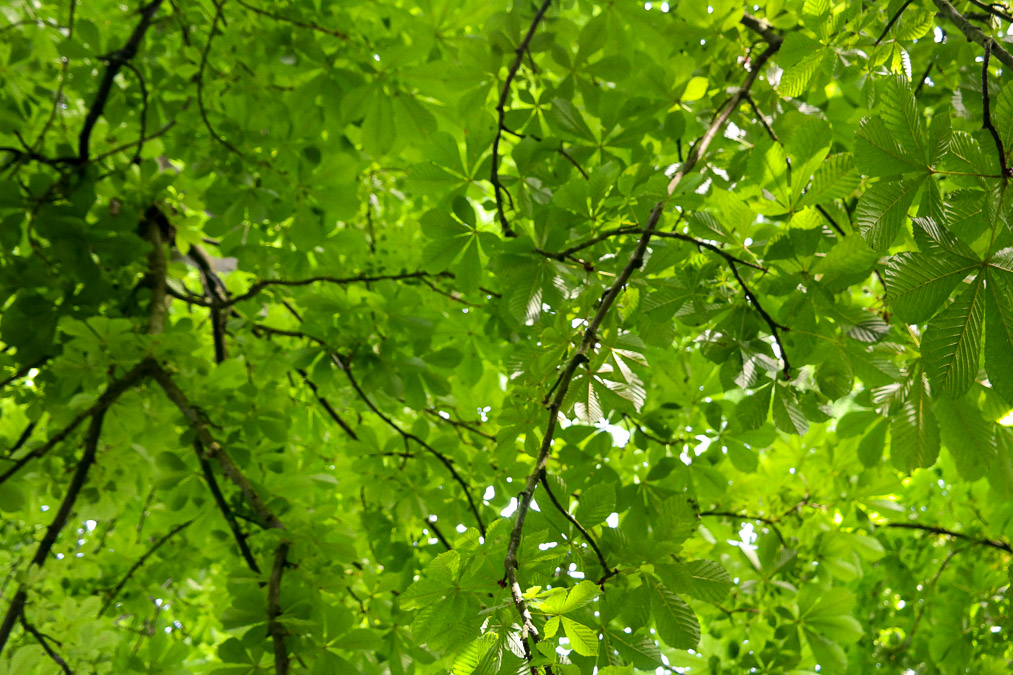 Below: thinking of Pat’s advice to try and avoid head-to-toe boring pictures, Ron took this picture by my request. But I found out that a landscape picture at the top is not cutting it… Have to work on that. 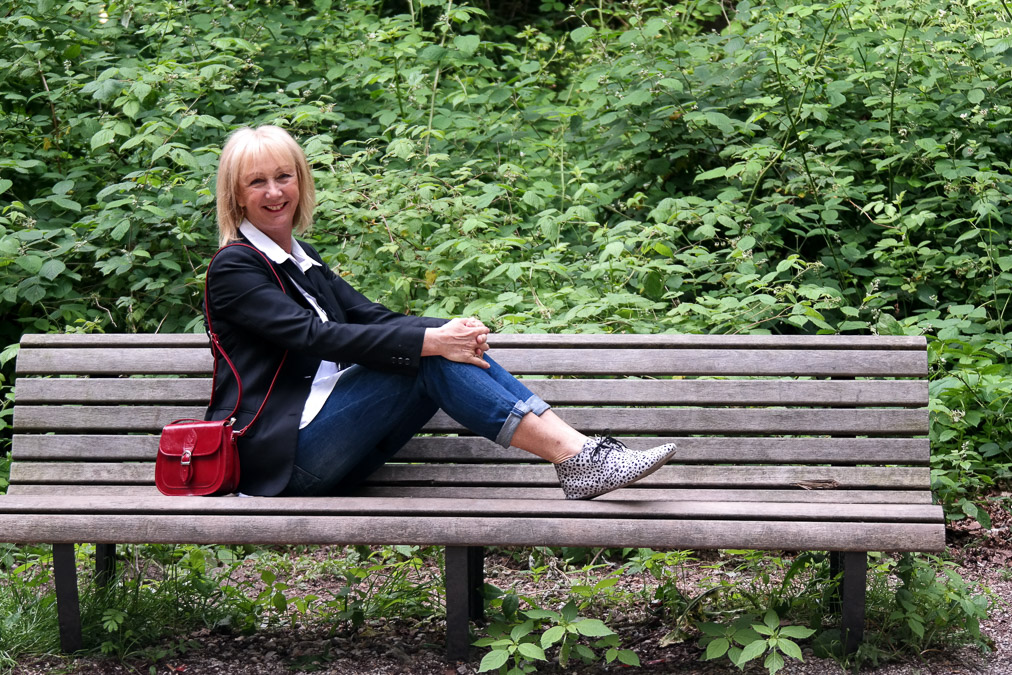 Below: we arrived at the monument of Laurens Jansz Coster, the inventor of the printing press who lived in Haarlem. (There is another person claiming this. Let’s say that great minds think alike.)

I thought it was rather a sad monument. Looked more like a tombstone. 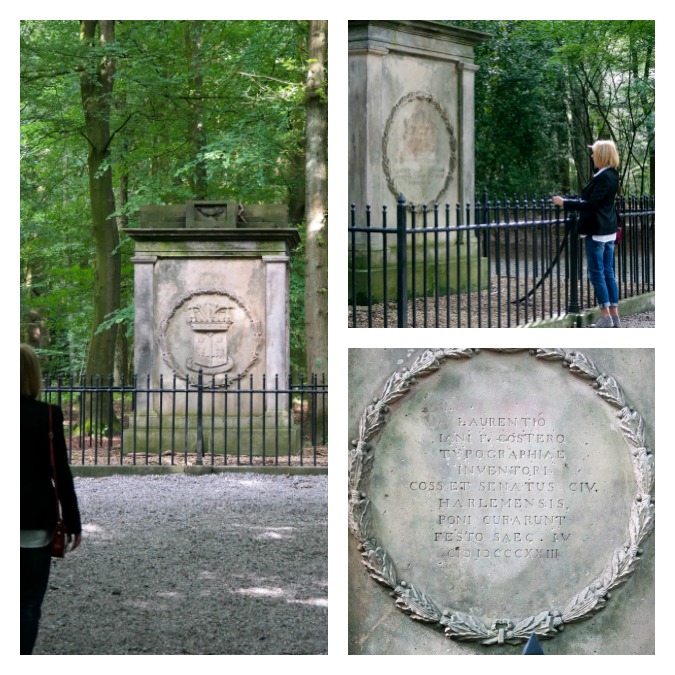 Below: I tried to climb over the fence but old age kept me from really doing so. 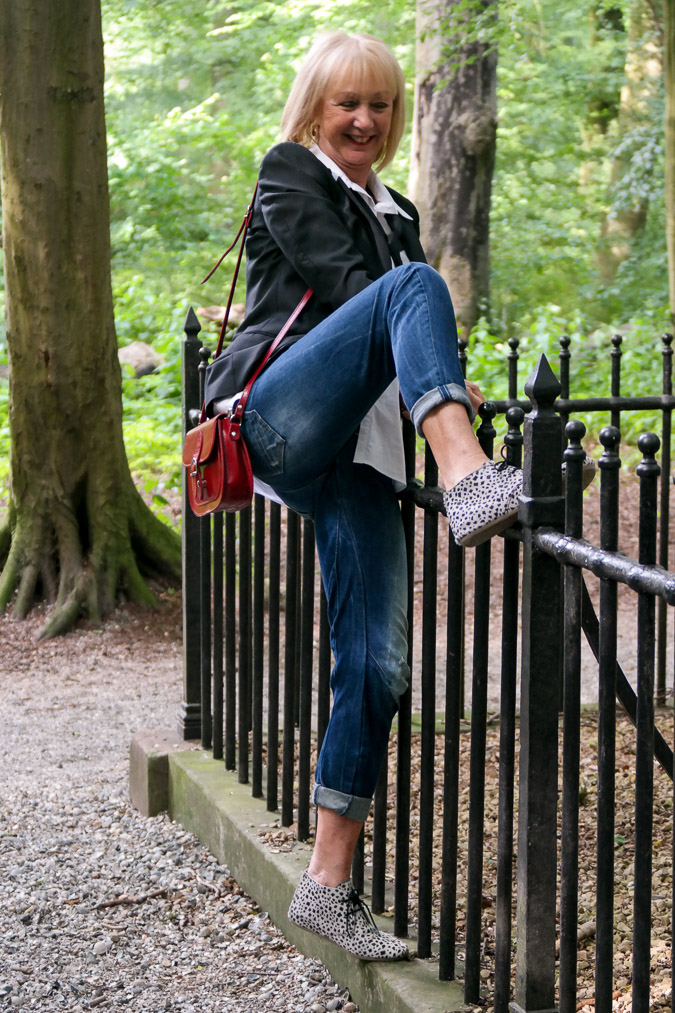 Below: heading towards another monument.. 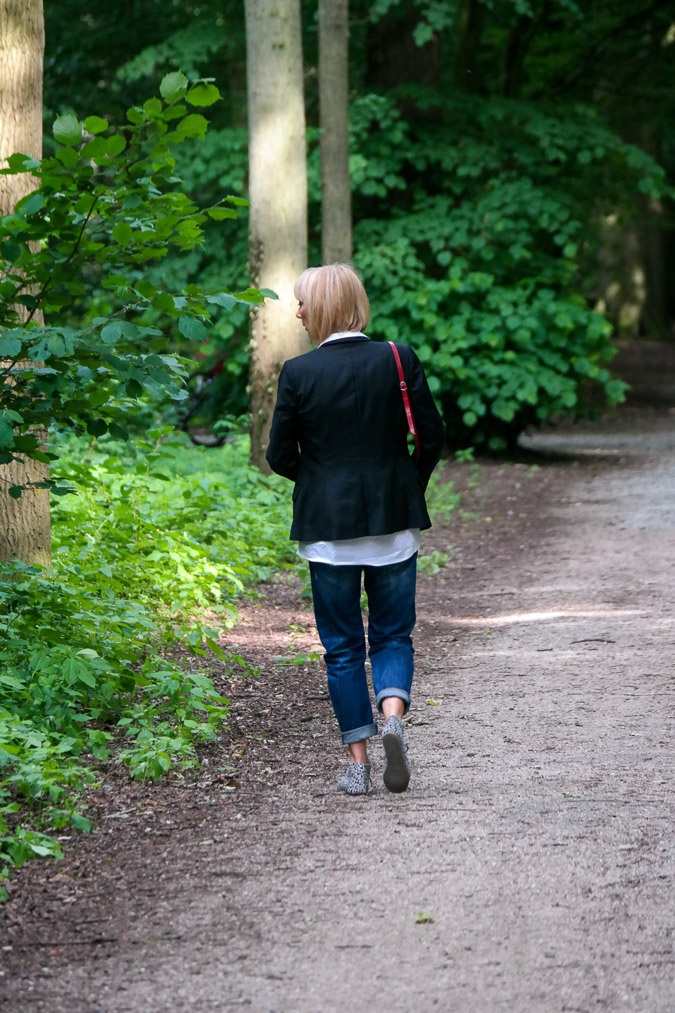 Below: this is the Hildebrand monument. 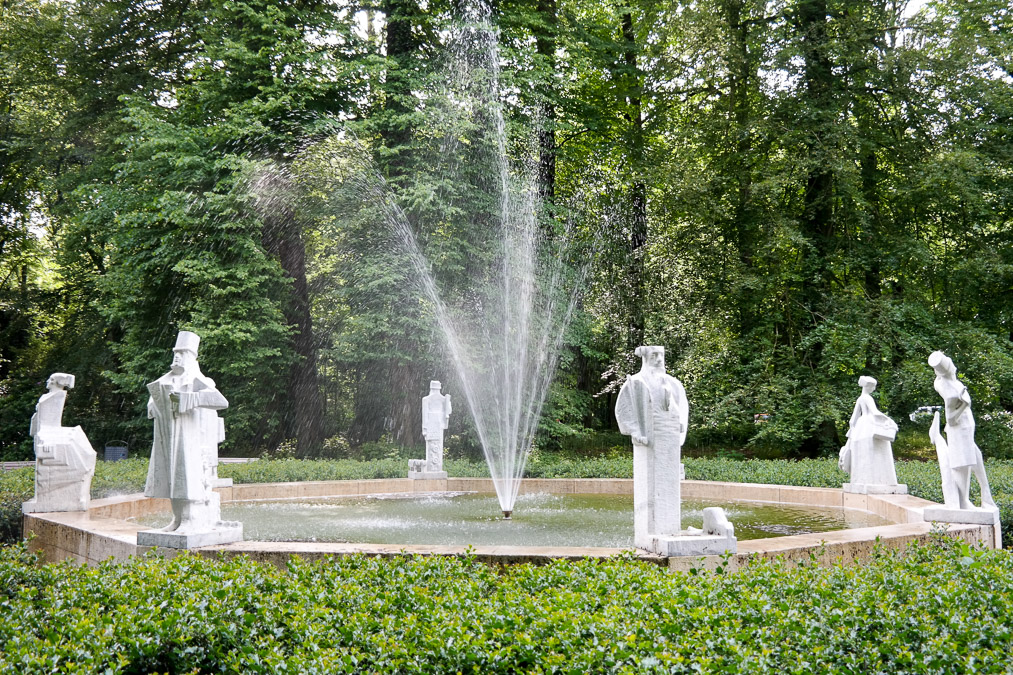 The explanation on the sign is only in Dutch. Which is a bit of a shame. Small explanation from me: Nicolaas Beets is a writer (1814-1903) who used an alias: Hildebrand. The sculptures around the fountain represent figures from his books. 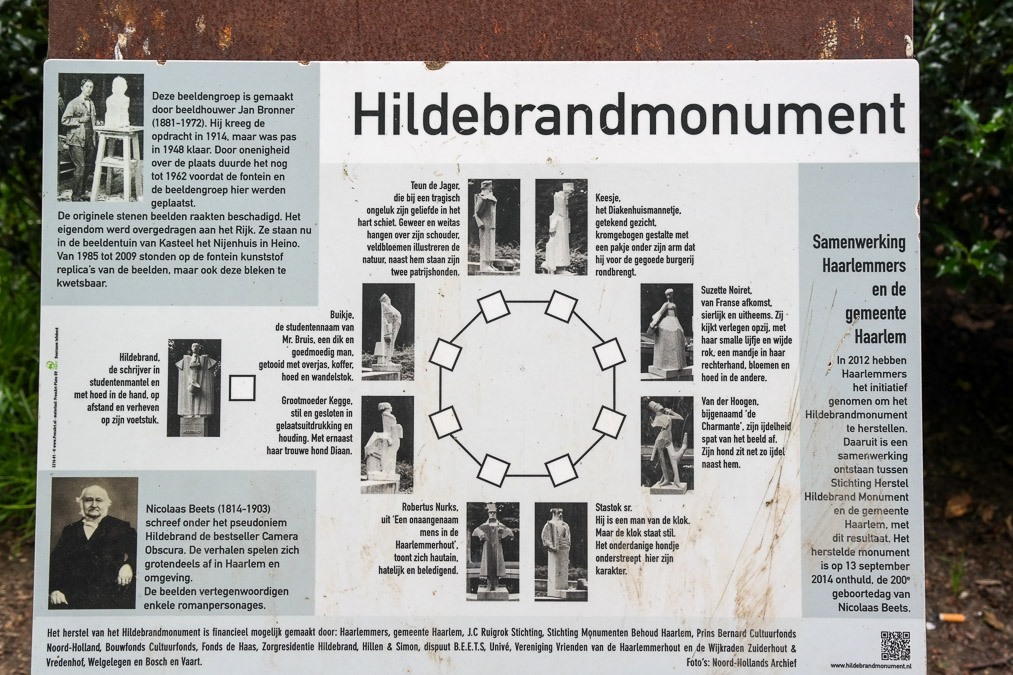 Below: a few examples of the sculptures up close. 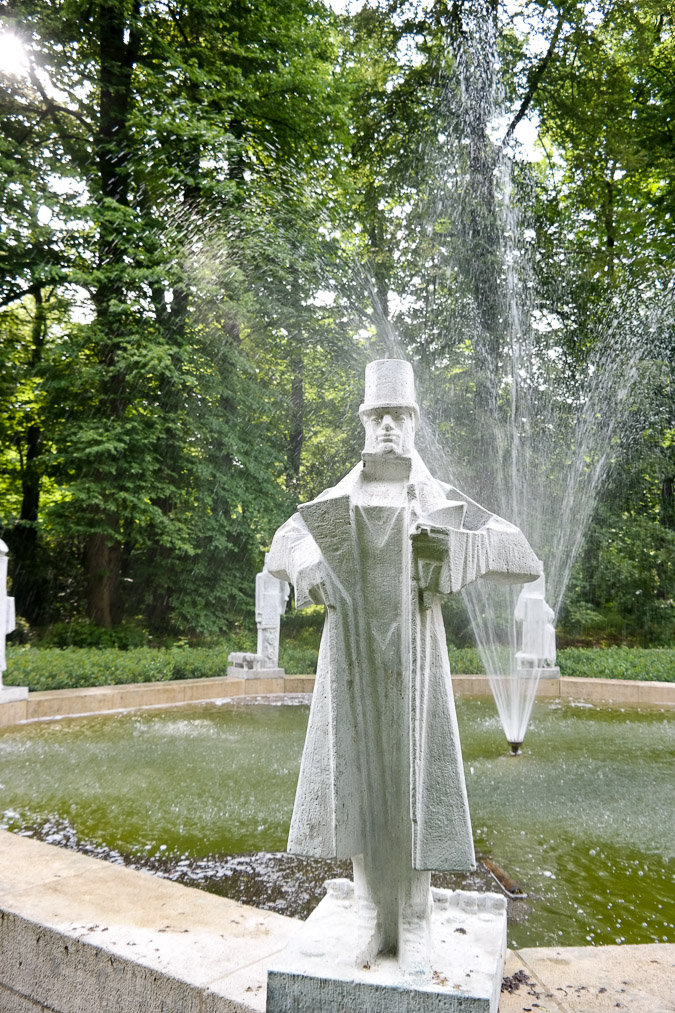 Below: arty picture. Can you see the lovely mansion in the background? 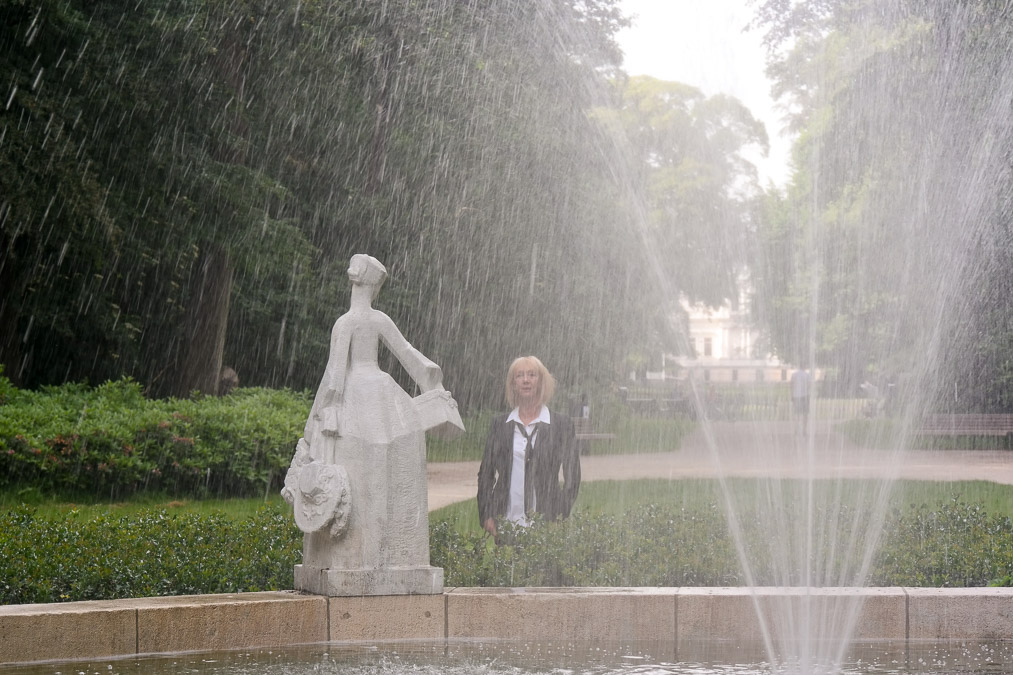 Below: close-up of the pin on my tie. 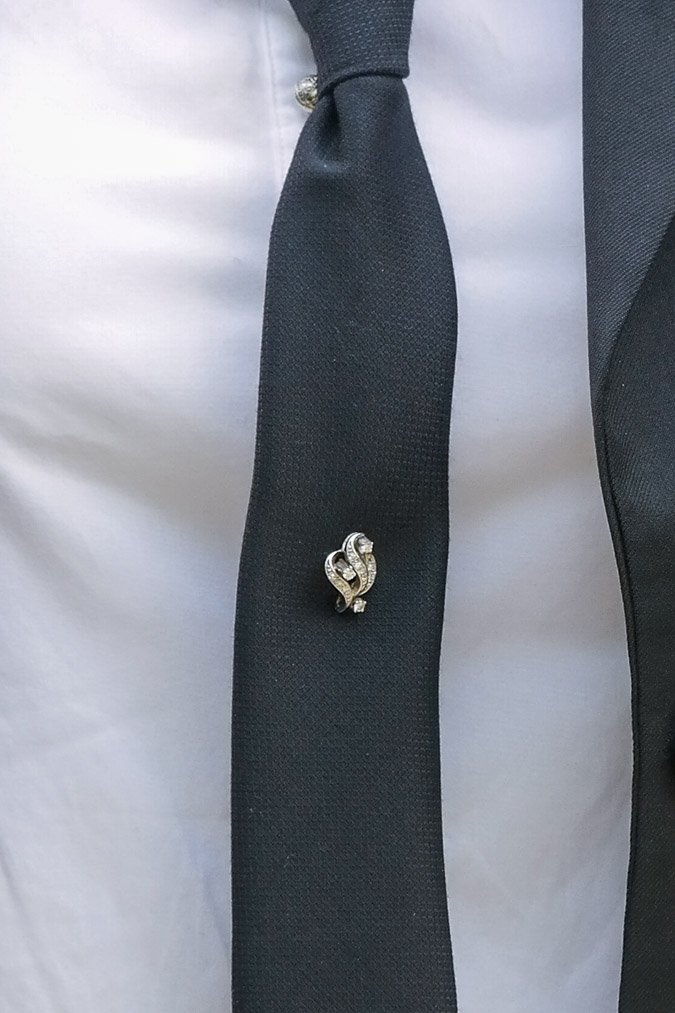 Below: close-up of the shoes. Brand: Maruti.

Below: in order to get such a close-up, I have to bend my body in awkward positions… My hair had died and gone to heaven by then. My appointment with the hairdresser was the next day. A week later than is advisable, but she insisted on going on vacation. 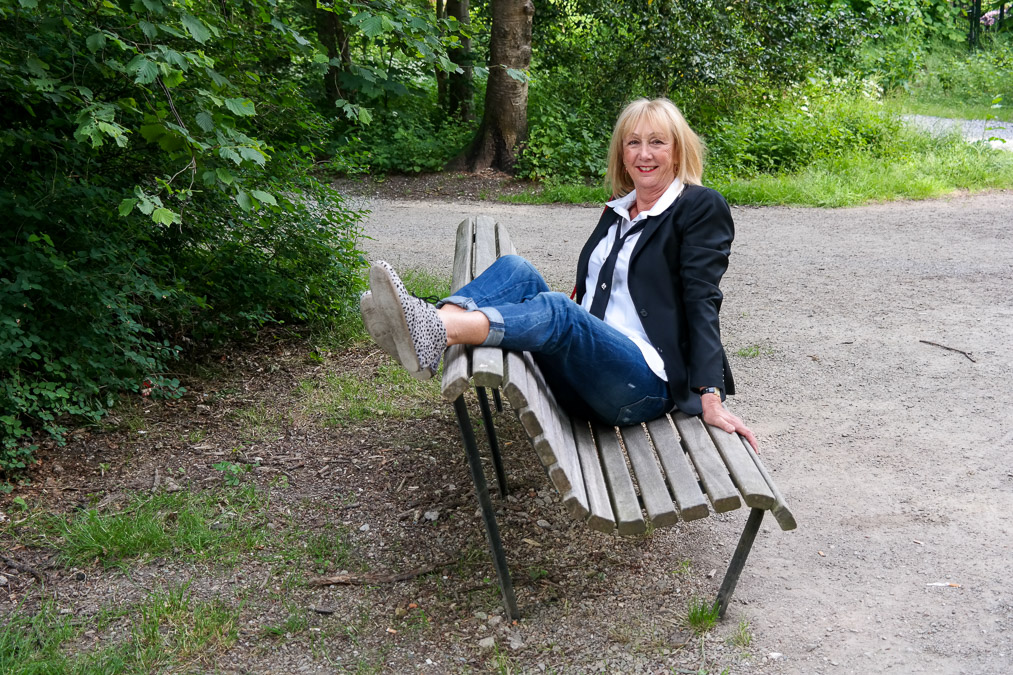 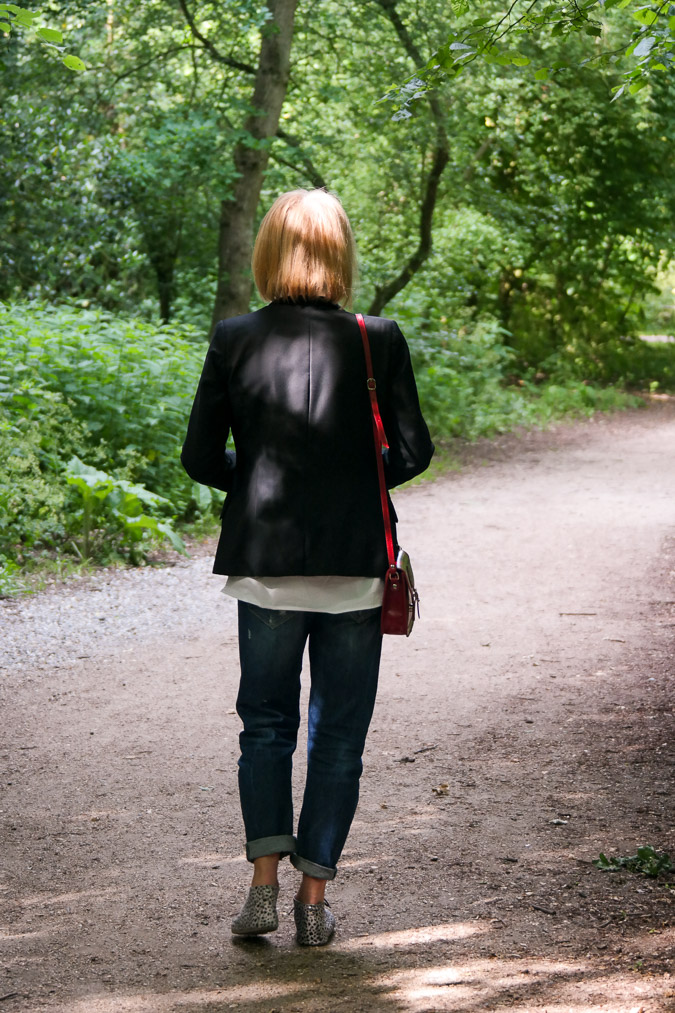 Below: beautiful chestnut leaf (Hah! Ron asked me whether I knew from which tree this leaf was, thinking I was such a city girl I would never know. I surprised him. We had to gather these leaves in the first grade of secundary school, in a thing called herbarium. It was September…. I still remember all those spiders while collecting these leaves. Horror for a person with spider phobia. 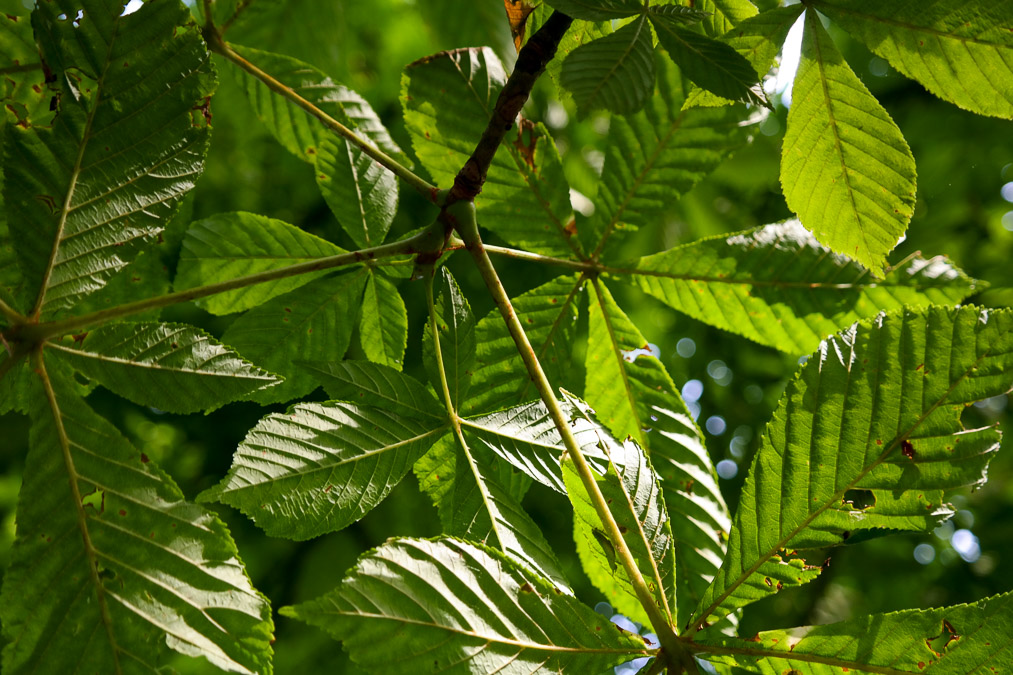 Below: we passed this weird looking tree and Ron thought it would make a smashing photo if I sat on it. Again fat chance. I know I could have pulled it off if I had tried it in a different way, but the tree was way too dirty. The outfit may look scruffy, but isn’t. 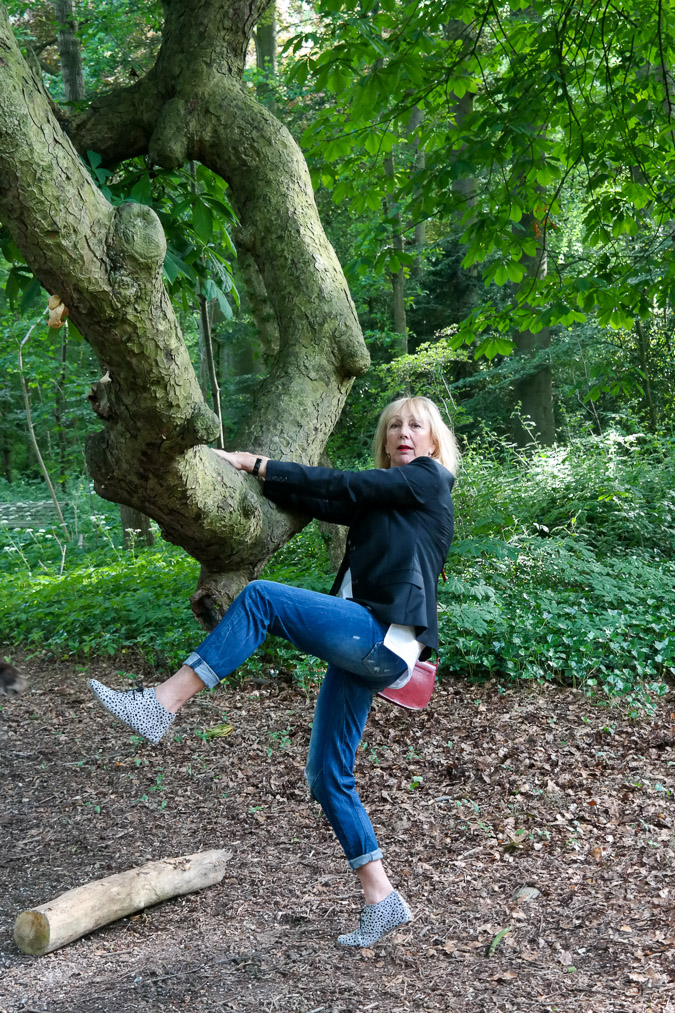 Below: I will leave you with this last photo of a stump with lots of mushrooms/fungus on it. Looks like art. 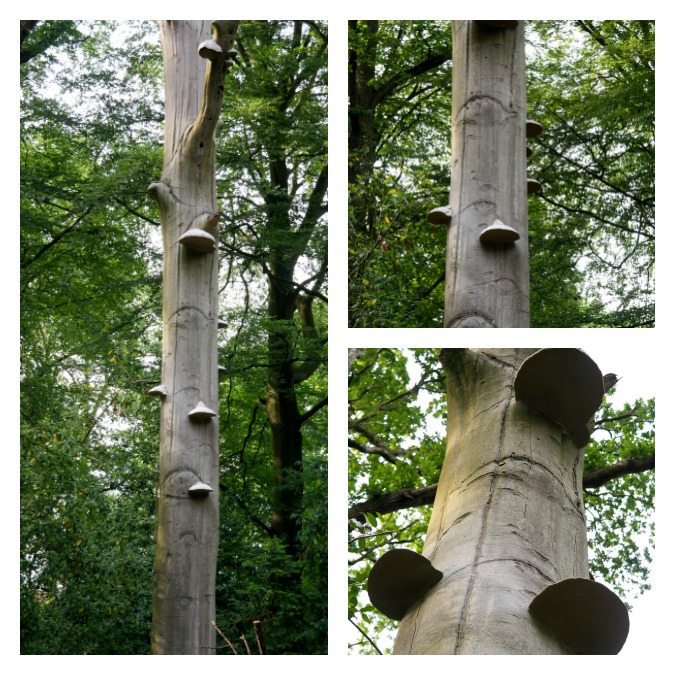