What to wear on holiday in Spain 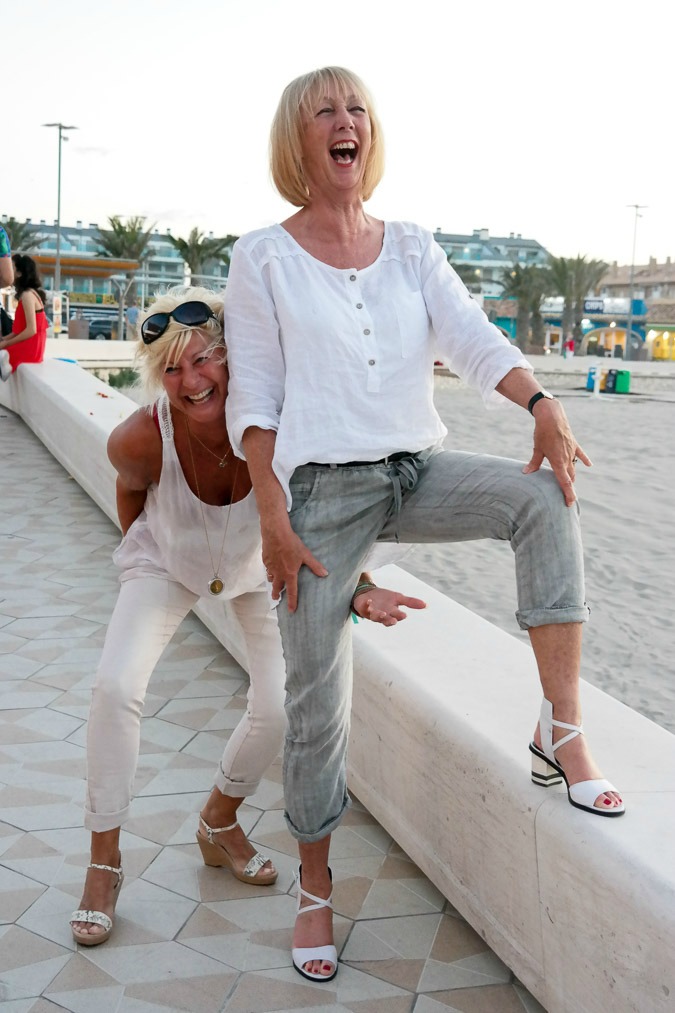 This first photo is representative of my holiday with 5 friends who I have known for 21 years. Laughter, laughter, laughter. Oh.. and shopping. My word, these women are worse than me (I do pick them, don’t I?). Which is why this blogpost deserves the title “What to wear on holiday in Spain” as you are going to see a lot of outfits. Not only mine, but my friends as well. I am thrilled to bits that they let me use their photos for a blogpost.

All six of us worked at the same employer in the old days. We meet once every two or three months, one of us being the host of the day. Same procedure every time: coffee with cake, then lunch, everybody in the car for an afternoon of shopping, back to the home of the “host”, drinks, dinner and go home. From 11 a.m. to 9.30 p.m. We often say: if they were to make a Soap of our lives, you would say “this is over the top”/ “that wouldn’t happen in real life”. We have gone through much. Only a very few times did we have a moment of falling out with each other but everything was always solved within the hour. We can resolve, forgive and forget. Our friendship is tried and it holds. No, it grows because of it.

Right… that was the soppy bit. Let’s go to outfits, shopping and fun. It was a sunny holiday.

Below: dinner at the beach. Let me introduce everybody. On the left Claudia, behind her Marijke and behind Marijke is Marianne. On the right side: Jilske, behind her me and behind me Marianna. There is only one letter difference between Marianne and Marianna which often leads to confusion. They all qualify for 40+style. One more than the other  😆 . There is 21 years difference between the youngest and the oldest. 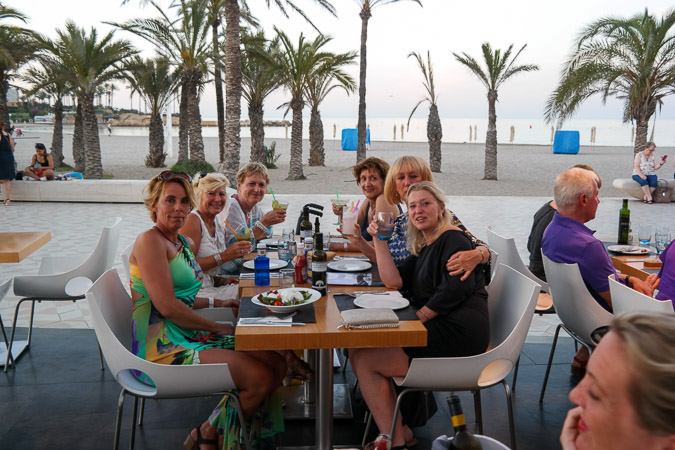 Below: Marianne in a blue/white top which she bought in Spain last year. Wearing white trousers with it. 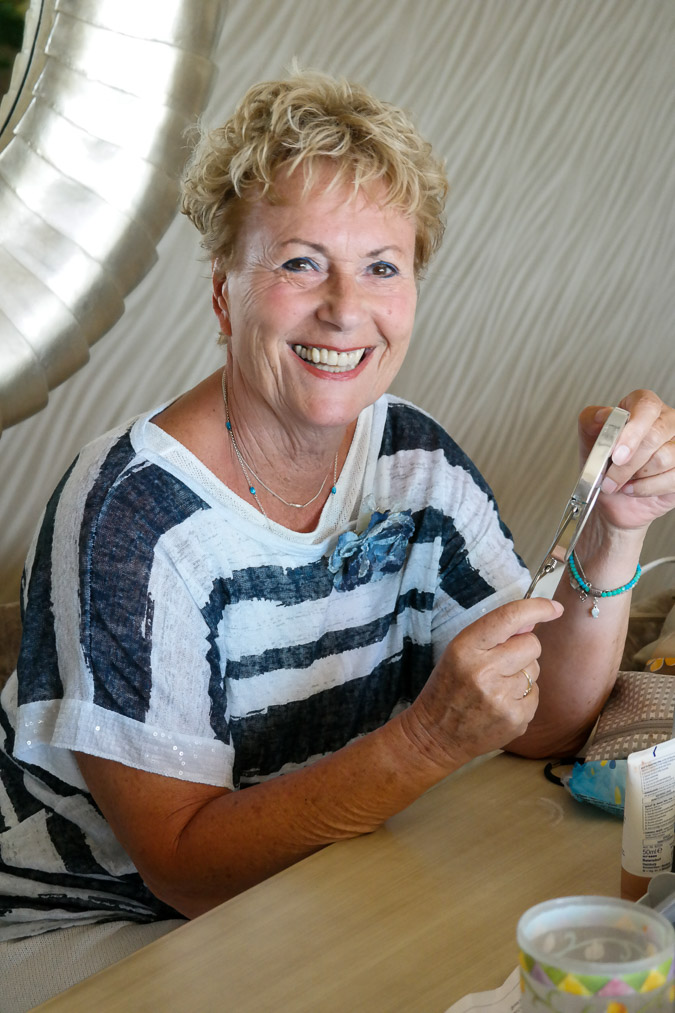 Below: Jilske, the most photogenic one of us all. She is wearing a white breezy summer dress. Jilske travels with a very small suitcase. But the amount of clothes she pulls out of it… amazing. Like watching a magician pull scarves out of his sleeve. No end to it. 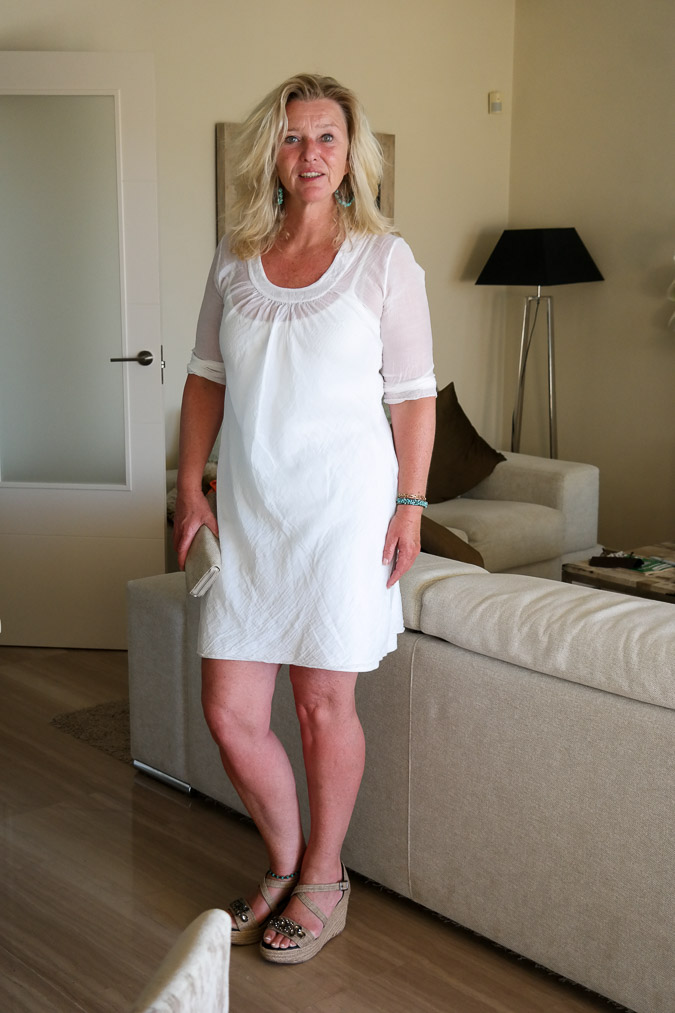 Below: Claudia in a borrowed dress. We tried to find the same one for her, but couldn’t find it. Unfortunately, as it looks smashing on her (and on the owner too). 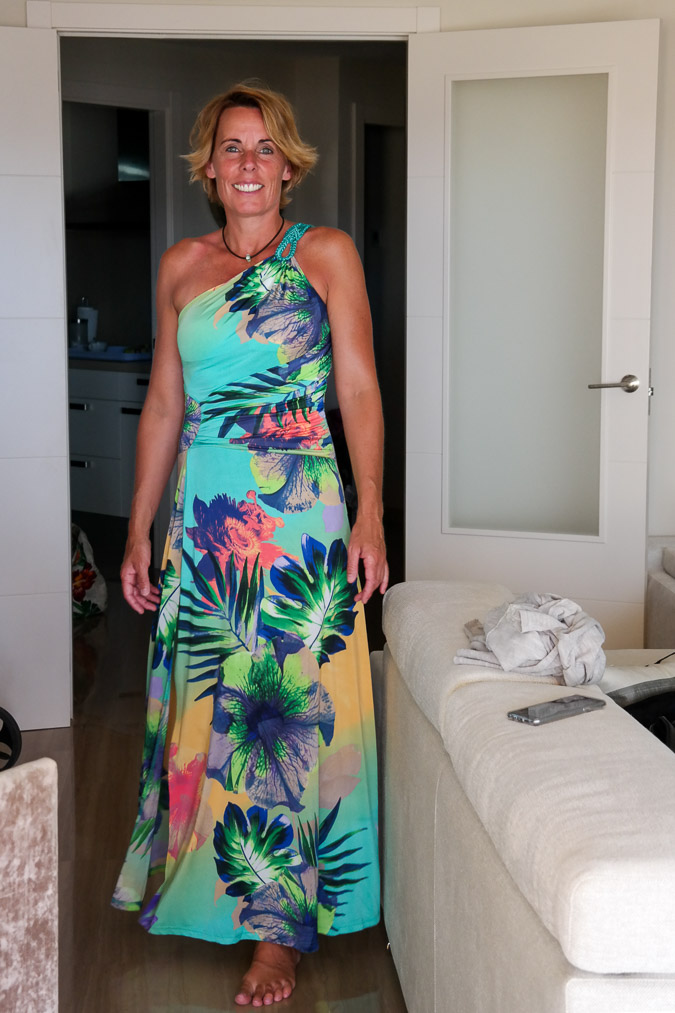 Below: Marianna. It was doubtful whether Marianna could join us on our holiday as she was due to be operated on her feet. Fortunately the operation was scheduled right after our holiday (and it was successfully performed). But it meant she wasn’t as mobile as would have liked to. She is wearing a very soft silk pair of olive green trousers with matching top and would of course have worn different shoes with this if she could have. Her orange cardigan gave a nice pop of colour. 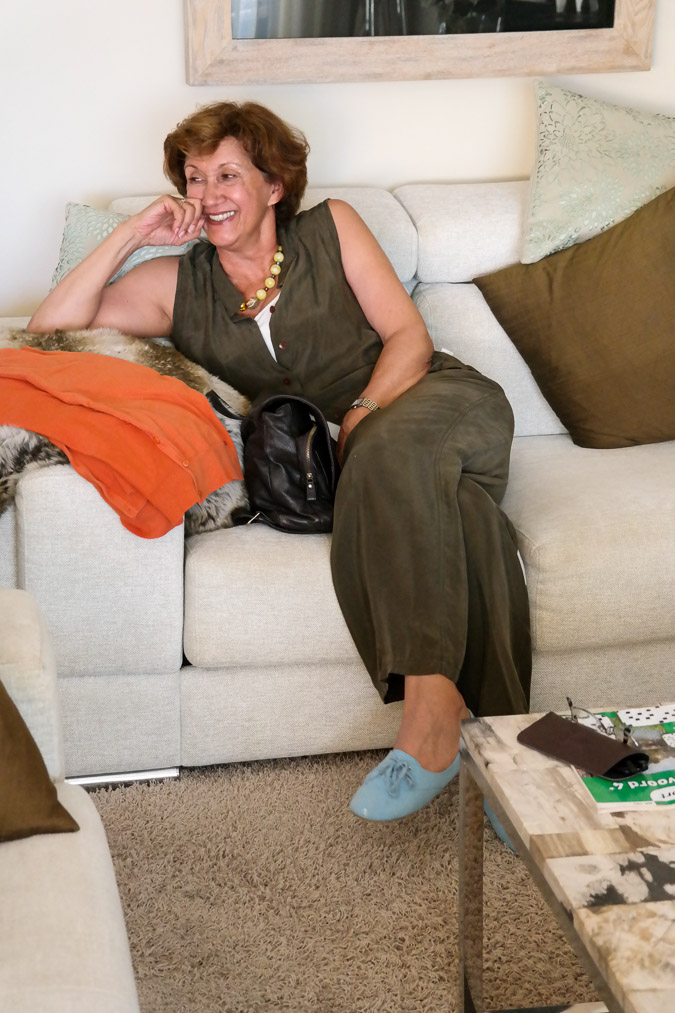 Below: Marijke, wearing a black lacy number. She is one of the most difficult people to get a decent photograph of. Her face is always in motion. Like Claudia she wears figure hugging dresses very well. 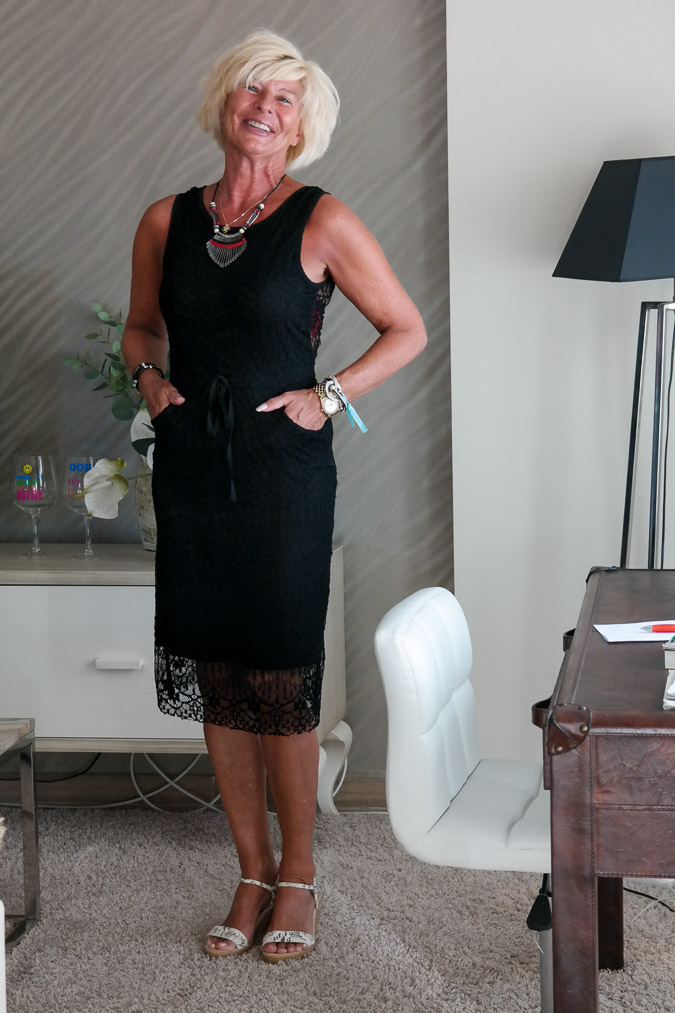 When we are in Spain, we go to the beach, we drink a lot of cocktails, we usually eat at the beach boulevard. And, as I said, we do a lot of shopping.

Below: first day, first shop… Jilske told me the combination of the green kimono top I was wearing that day (seen before here) with the fuchsia trousers was a great combination. Especially with the scarf we found. Who am I to argue? I bought the trousers and the scarf. The lady you see in the mirror is the lovely owner of the shop who recognizes good customers very well 😆 . 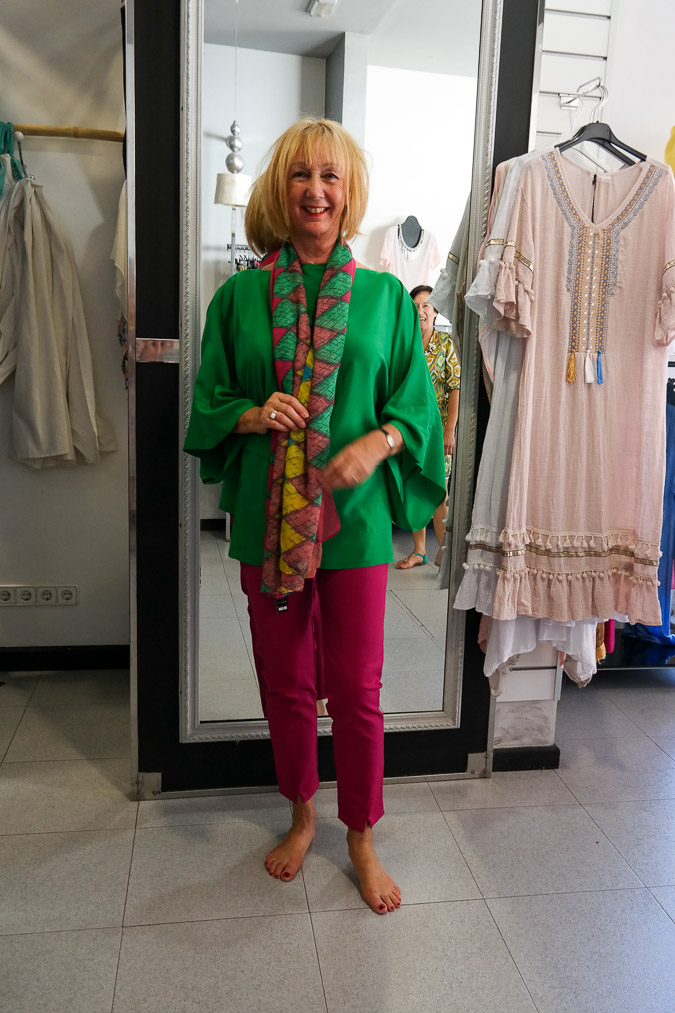 Below: Marijke tried on this dress because we all fell in love with it (her husband too as it turned out). But we all couldn’t wear this. This is a typical Marijke-dress. We found some great black peeptoe slingbacks to go with the dress. 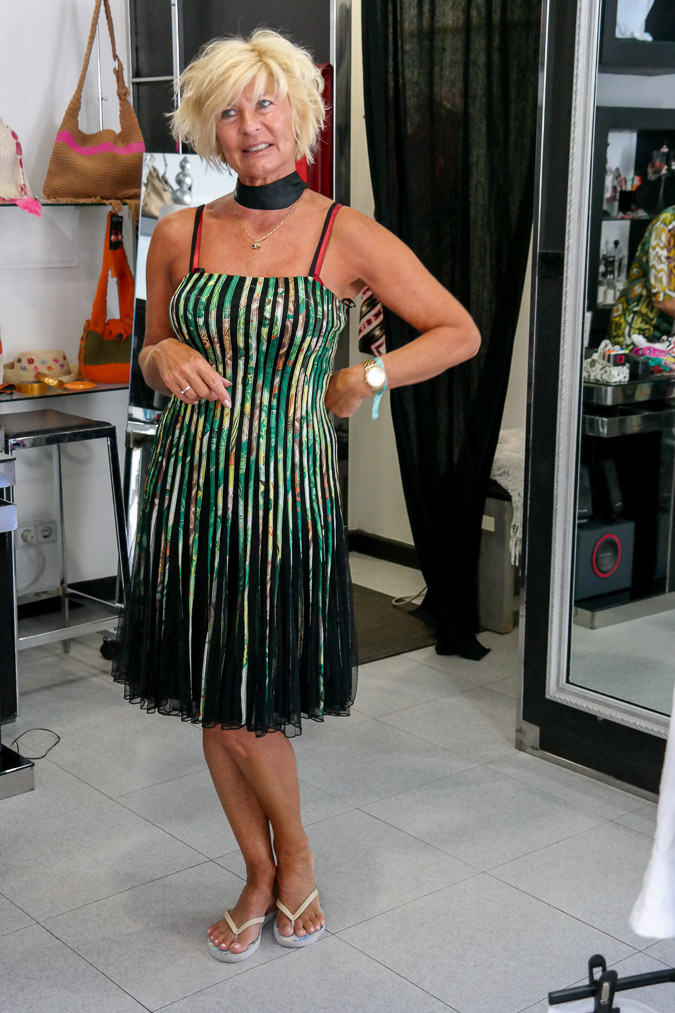 Below: me again. These linen trousers and shirt were a steal. Perfect for hot weather and a style which I like. Also see the top picture of this post in which Marijke is photobombing. 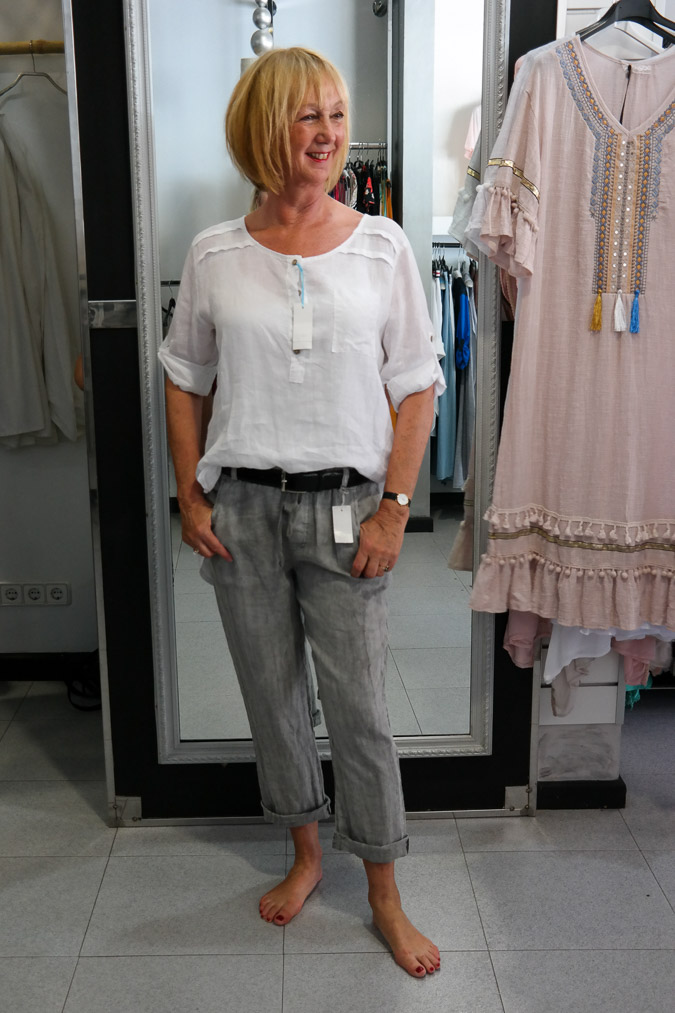 Below: Jilske took some more photos of the outfit so you can have a good view. The shoes I bought in Geneva work so well with this outfit. 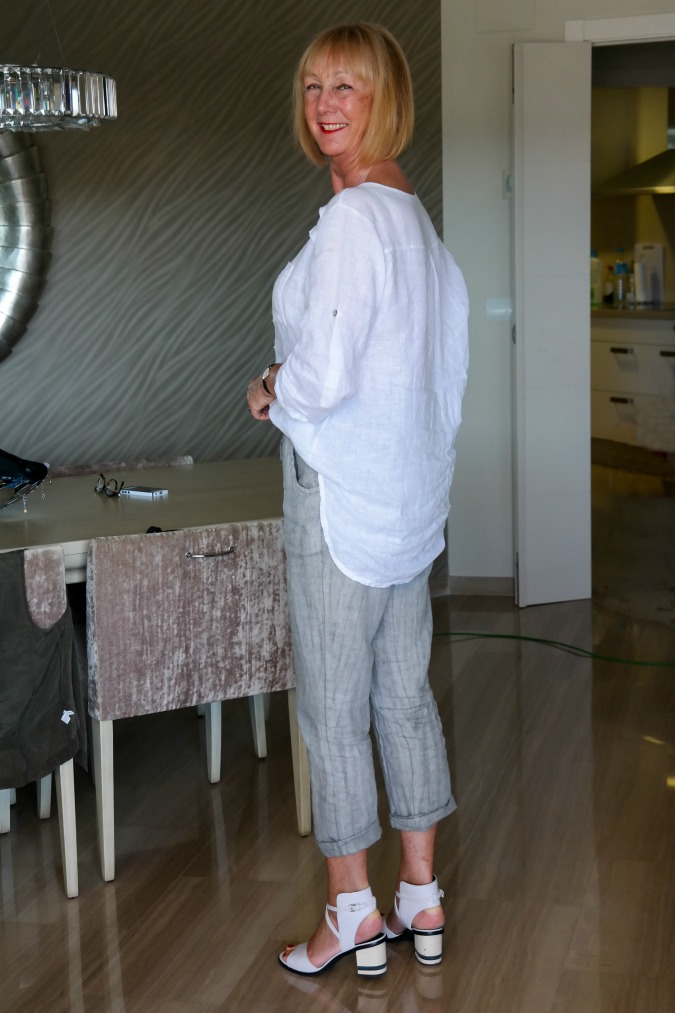 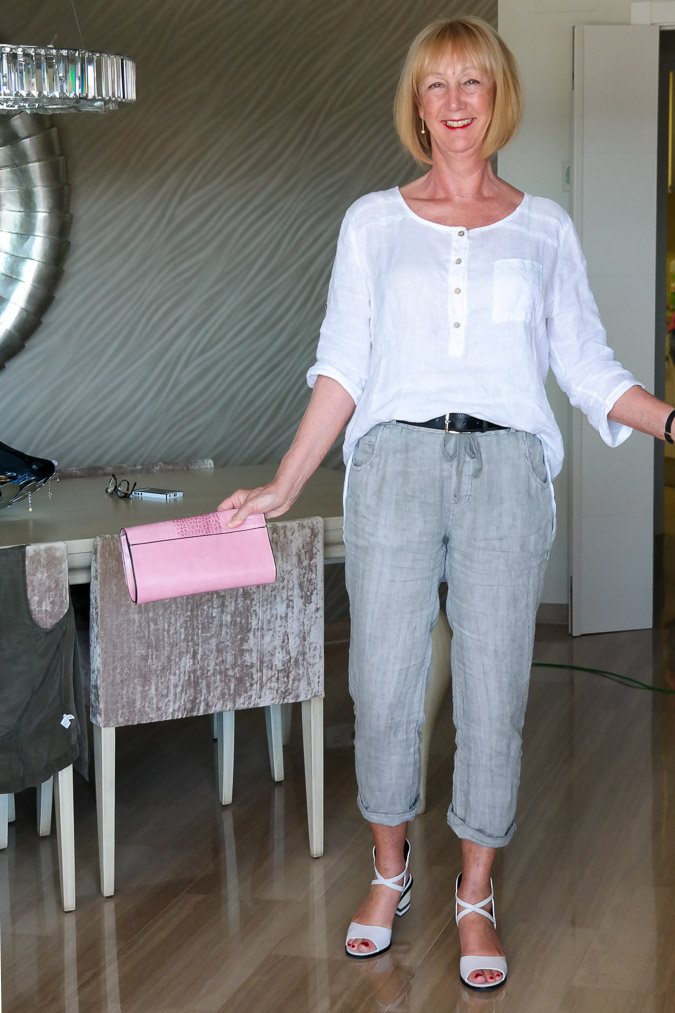 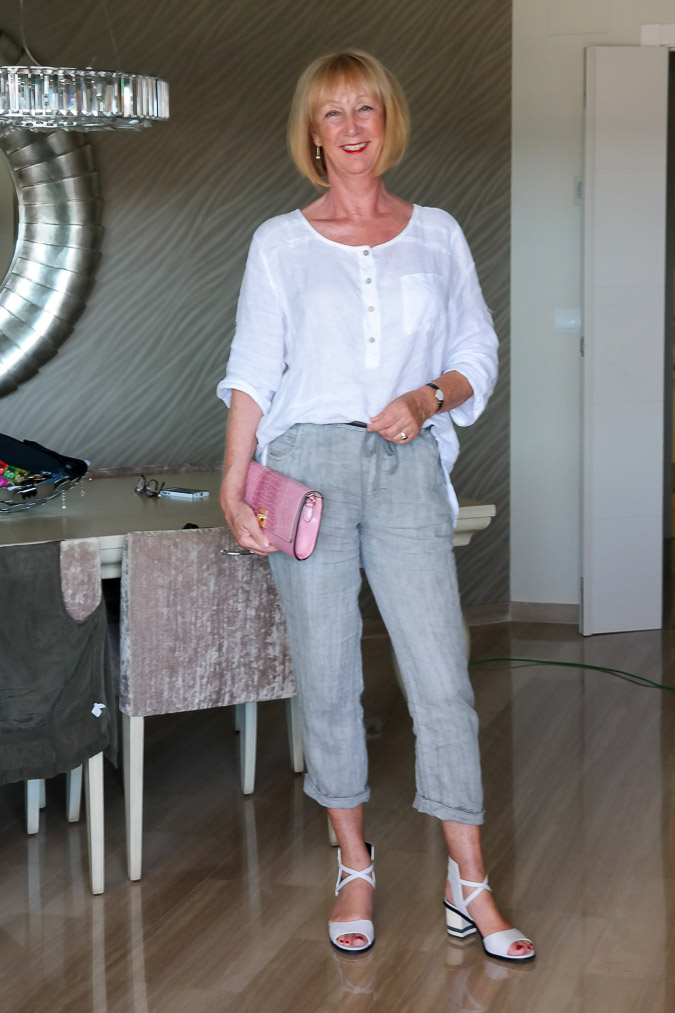 Below: close-up of cute little clutch. 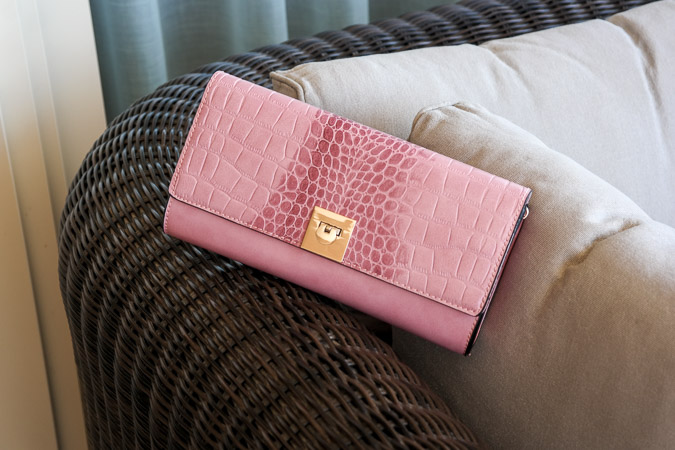 Below: we really cleaned up, set the table and cleaned it again, washed towels and stuff, but the dining table was a mess. The whole holiday. 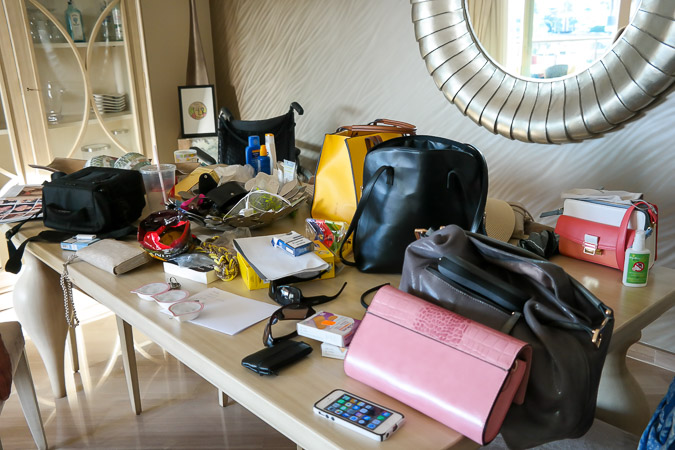 Some more outfit pictures of the others.

Below: Claudia, the most sporty one of us. 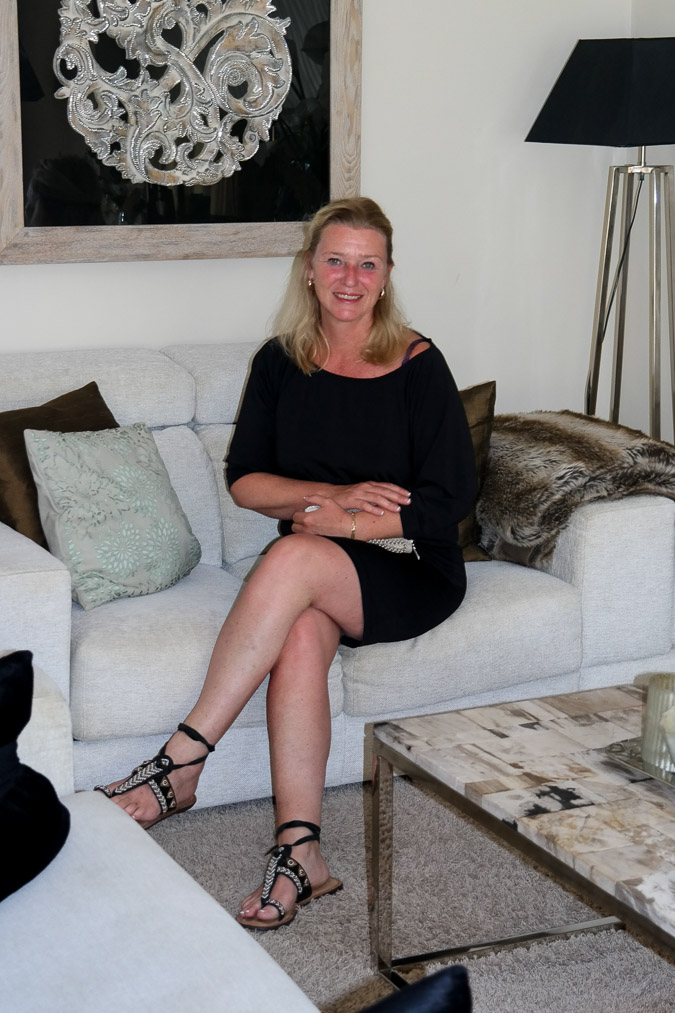 Below: I will leave you with this last cheerful picture of Jilske, Marijke and me. Cocktail hour. The big white section behind us is the sea.

More examples of what to wear on holiday in Spain next week. As I said, my friends love shopping and clothes as much as I do.

Linking up to Not Dressed as Lamb featuring I Will Wear What I Like. Theme: red, white and blue for the 4th of July.

Also linking up to Not Dead Yet Style with Visible Monday. Similar theme this week: how to dress when it is hot.

← Battle of the jeans What to wear in Spain – the sequel →

← Battle of the jeans What to wear in Spain – the sequel →