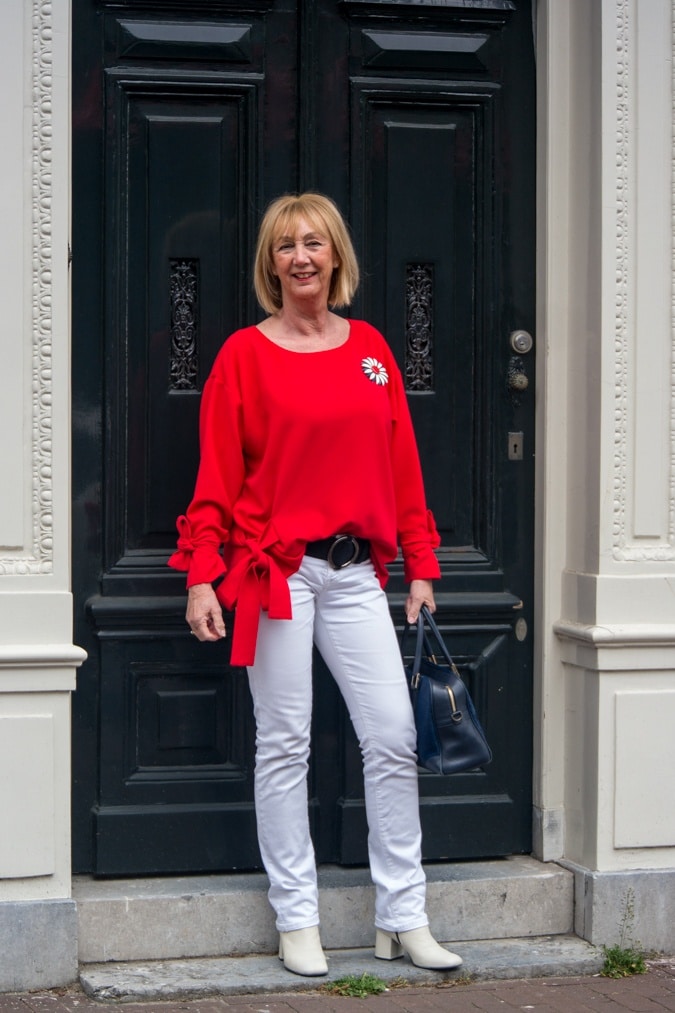 As I have stated in previous years, you don’t need to look like a fool on King’s Day. Traditionally the day when everybody goes mad in The Netherlands. We celebrate the King’s birthday (April 27) with flea markets everywhere (the Dutch love to make a buck), dressed ridicously in red/white/blue or orange, preferably with an orange hat, wig or crown. And we pray for sunny weather. Or at least no rain. This year we were quite lucky, as it wasn’t raining although with temperatures of 15 degrees Celcius (or less) you could do with a coat.

This post could have been much nicer if A) the sun had been shining full blast, B) we had gone to Amsterdam and C) my knee had recovered sufficiently to walk a whole morning. As neither of these requirements were met, we did a quick tour through Haarlem. (To see what it could have been like, click through to this post of King’s Day 2014, the day we met Australian Donna and her husband.)

As we passed by car, we saw that the lovely park of Kenaupark (posh area) had been turned into one big flea market. Evidently the place to be in Haarlem. Everybody had emptied their attic and most people would buy other people’s junk to fill it again. Books and toys are most popular.

Below: I started with a (blue)coat after we parked near the park. 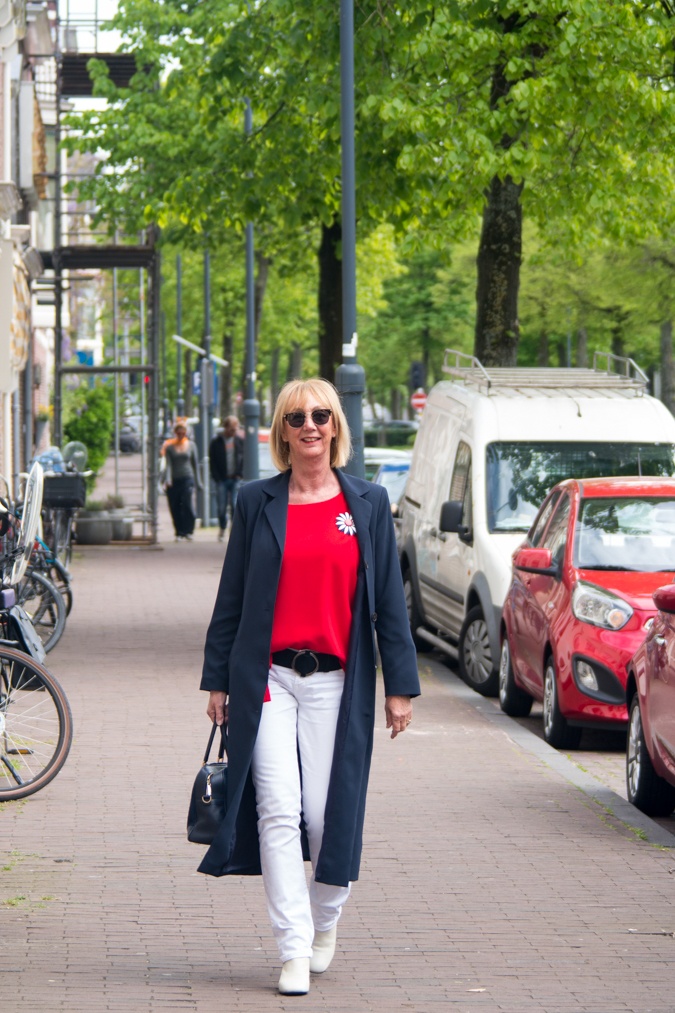 The red top I am wearing is a present from my mother for my birthday a couple of weeks ago. The brand is Hofmann and I found it in a fabulous new store in Haarlem: Studio LM. Oh my… this store is high end and holds such treasures. It is a miracle I came away with only one top. The service was perfect. I tried on a couple of trench coats when the designer friend of the sales assistent handed me this white one by Les Coyotes de Paris (second row of the lookbook). Oh… I was so tempted, it was perfect for me. But a white coat?? I could still recall the smile on the face of my dry cleaner guy when he saw me in the street with a white woolen winter coat (this was years ago). You could see him thinking “Business!!”. I know Studio LM will see me again. In case you were wondering: yes, I have paid back all the money I borrowed from my savings account. Back in business (shopping) but with plans to save more from now on. Good girl.

Below: Entering the park. It was packed. The red top has a deep split at the back and lots of bows. I love bows. 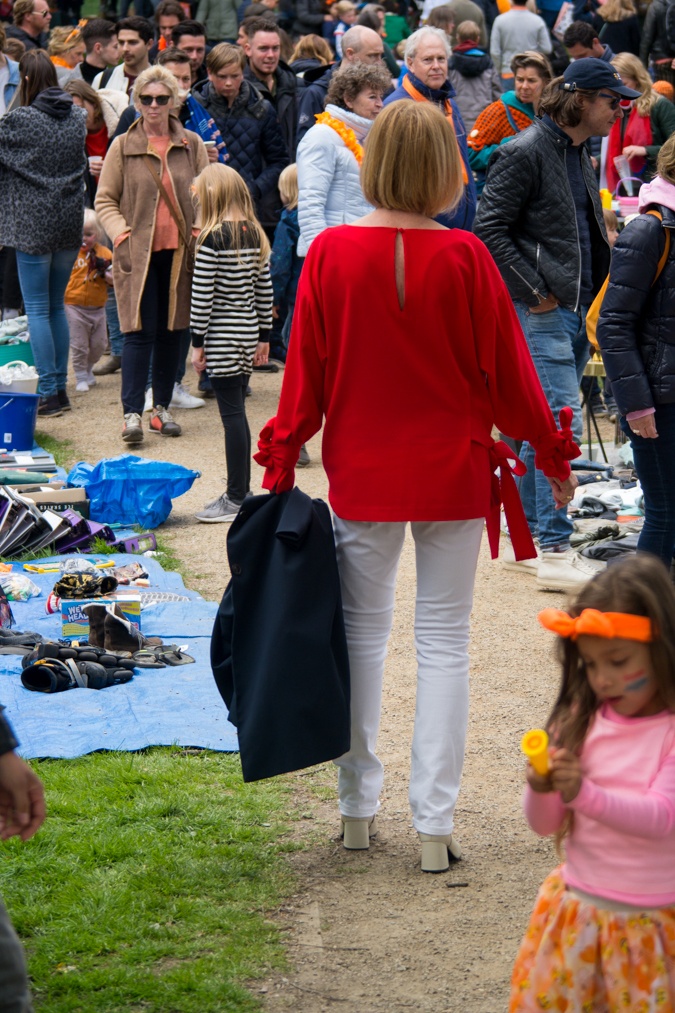 Below: Focus on the bows. 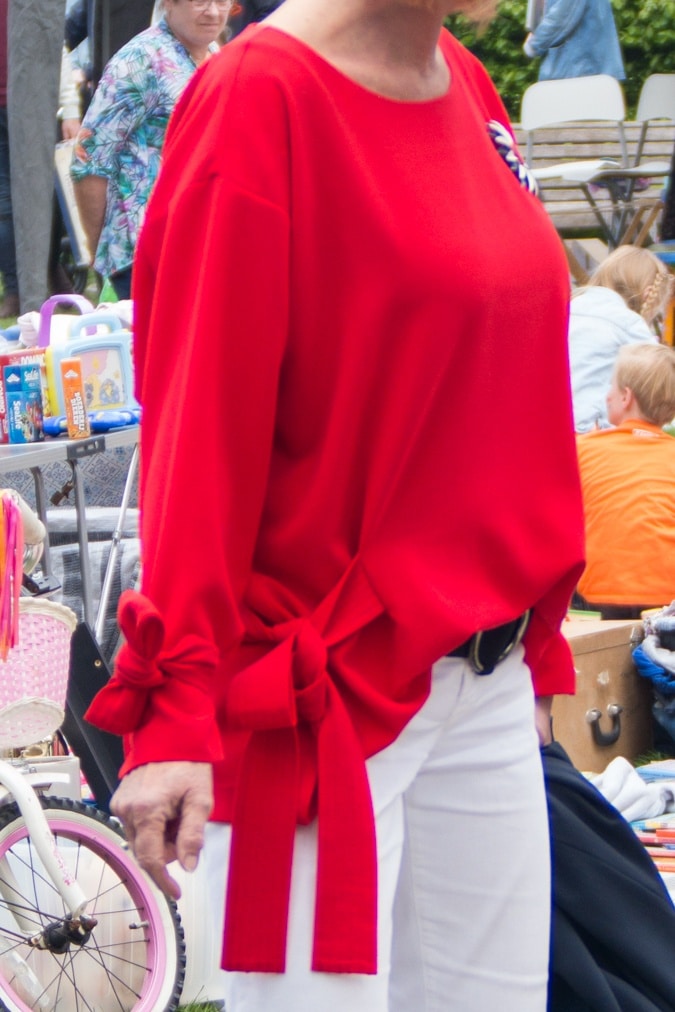 Below: As I said, Kenaupark is really beautiful. Reminds me a little bit of Notthing Hill Gardens in London. There are detached mansions which were built as summer residence for the rich of Haarlem around 1867.

Below: Hmm… what’s that? A summery throw-on? 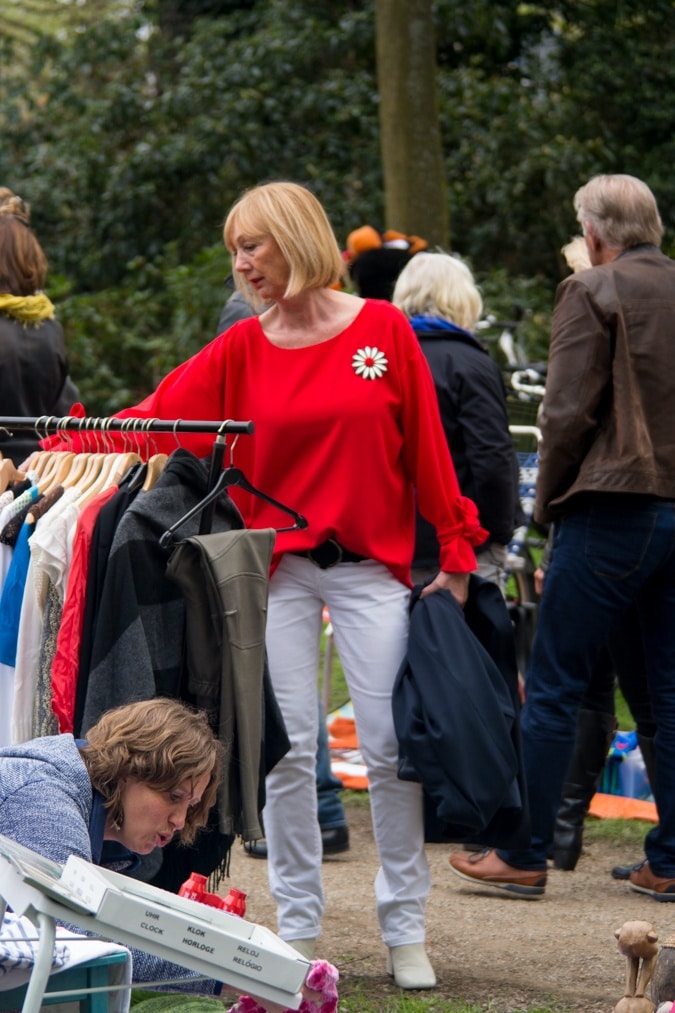 Below: Nice… however a size small. I have size large. I know nobody believes me, but I have proven many sales assistants wrong when they disagreed. 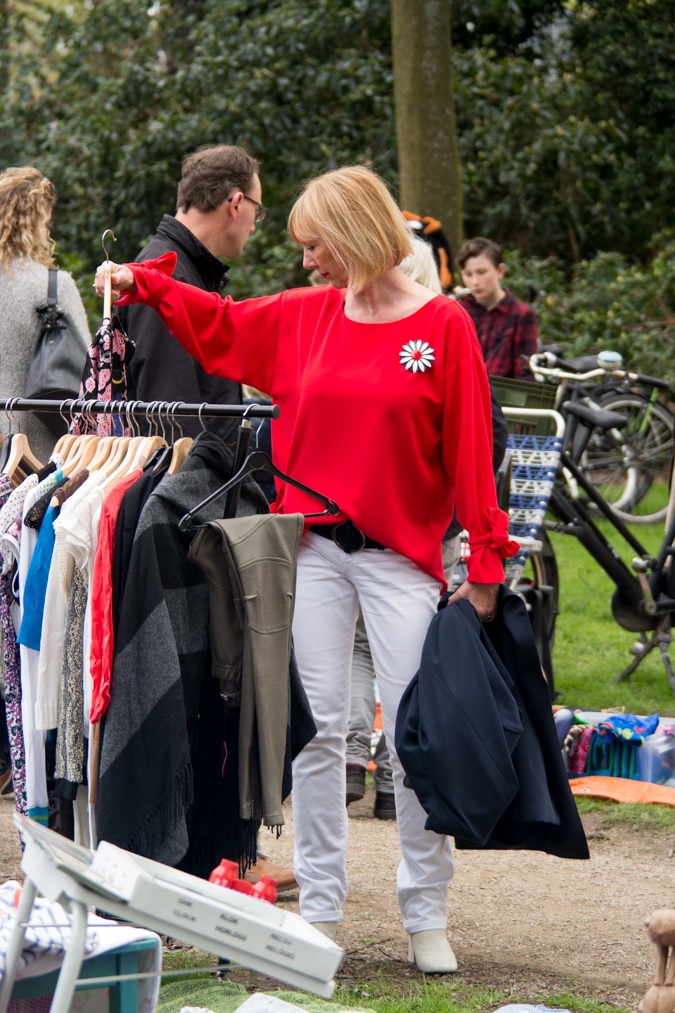 Below: Lots of activities going on. These kids were probably trying to earn some money by performing. 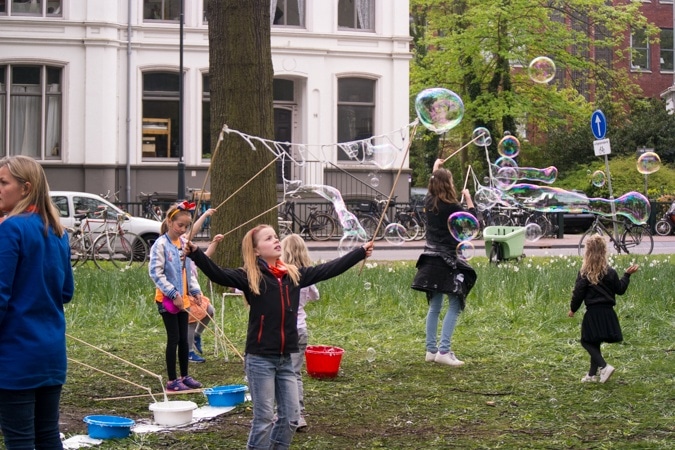 Below: Further down the busy park. Gosh I love this top. 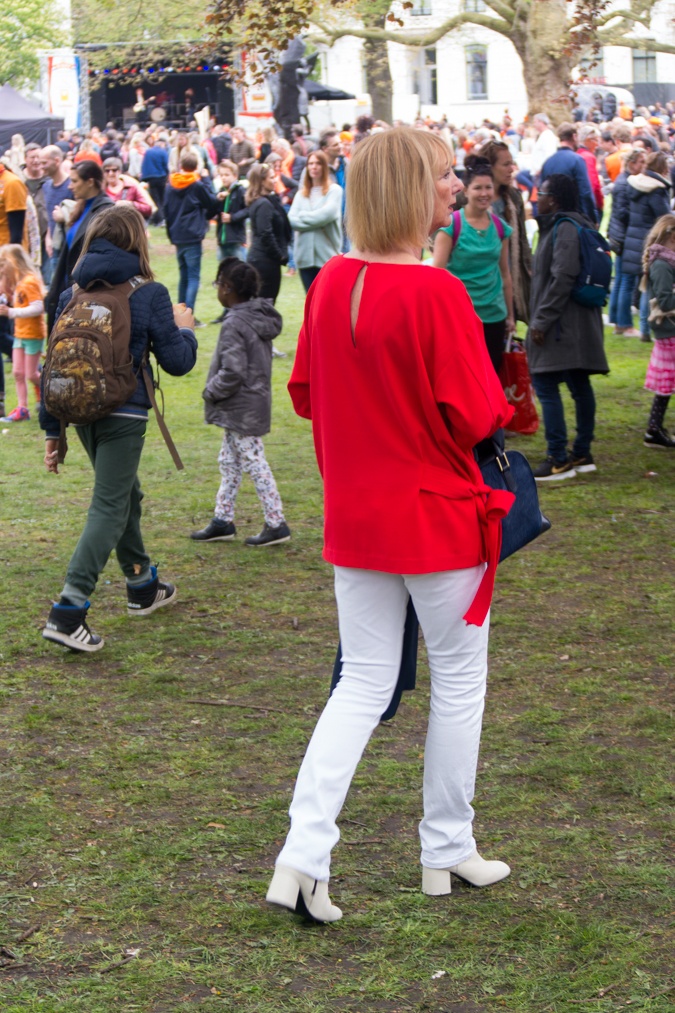 By the way, I have been to the orthopedist last Thursday. We agreed that inflammation is indeed what is wrong, caused by the wrong support soles. Since last Monday the knee is improving. I am not there yet and back on diclofenac for another fortnight to help the inflammation disappear. The orthopedist approved. Which means I now hardly feel any pain anymore haha. Oh and surprise surprise. I inquired whether he dared to predict when I would be back on high heels. You know what he said?? “No problem. If you want to wear high heels, do so”. I was flabbergasted and asked him whether that wouldn’t put extra pressure on the poor knee. His anwer: “You shouldn’t worry so much. Just do whatever you want and when it hurts, do less.” Right…… 😯

Below: There is so much junk for sale. Mostly sold by children with their parents supervising. 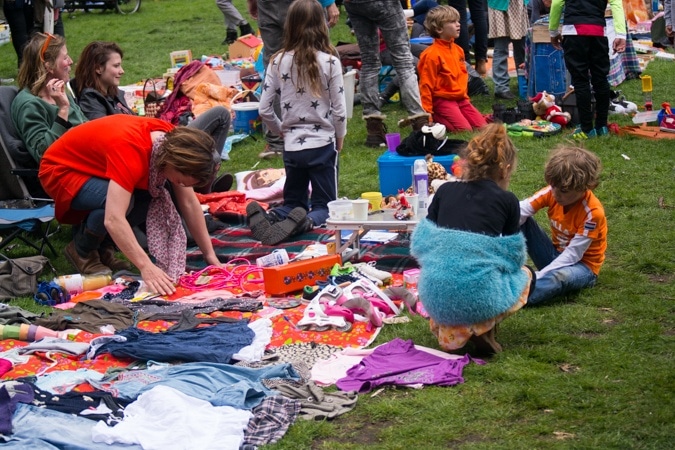 Below: A collage of headwear. 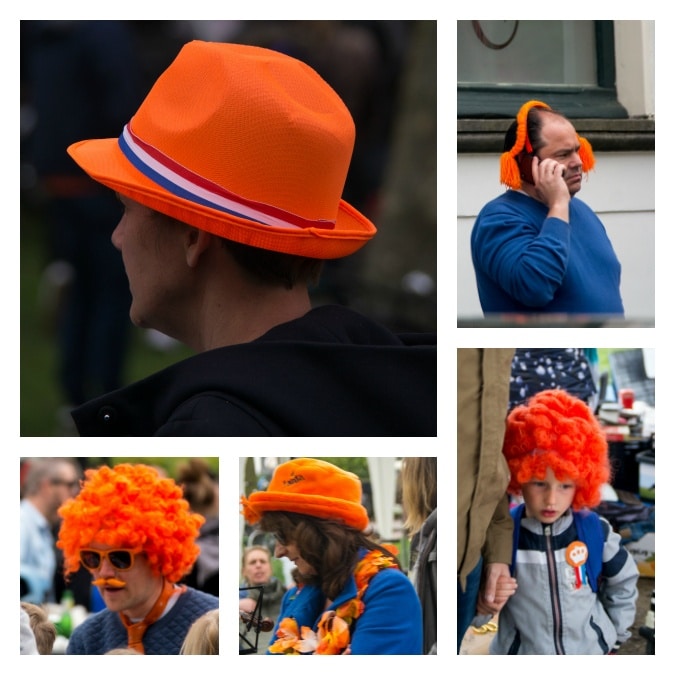 Below: Cannot remember why I laughed. I suppose I laugh easily and a lot. 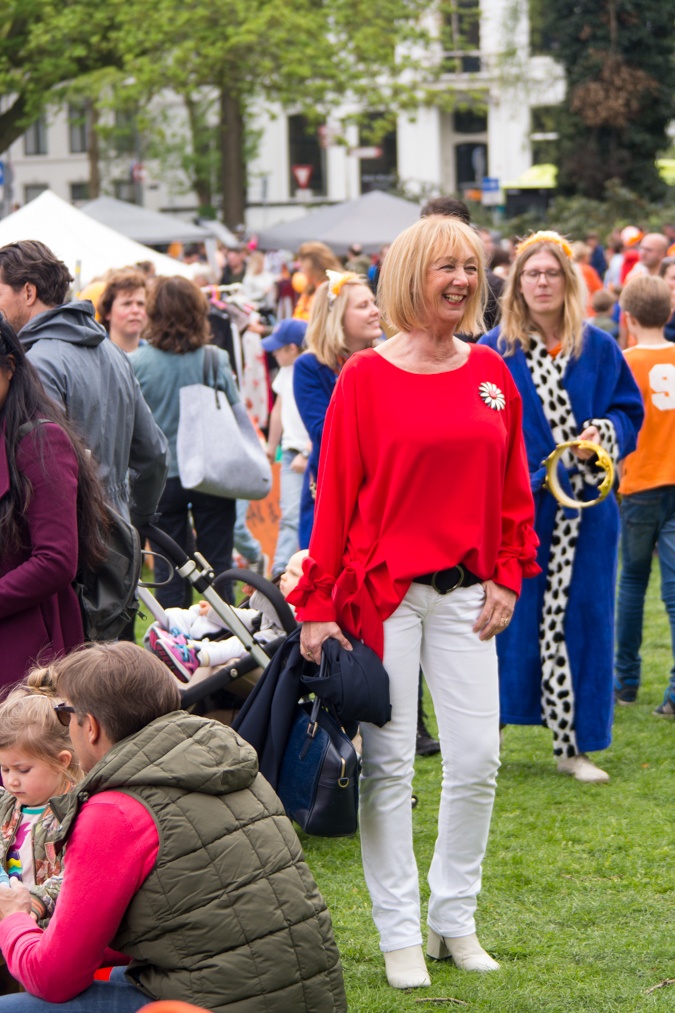 Below: The girls behind me in the photo above, overtook me and asked whether I liked to be photographed as queen. Two euros please.

Below: I had to put on a regal face. 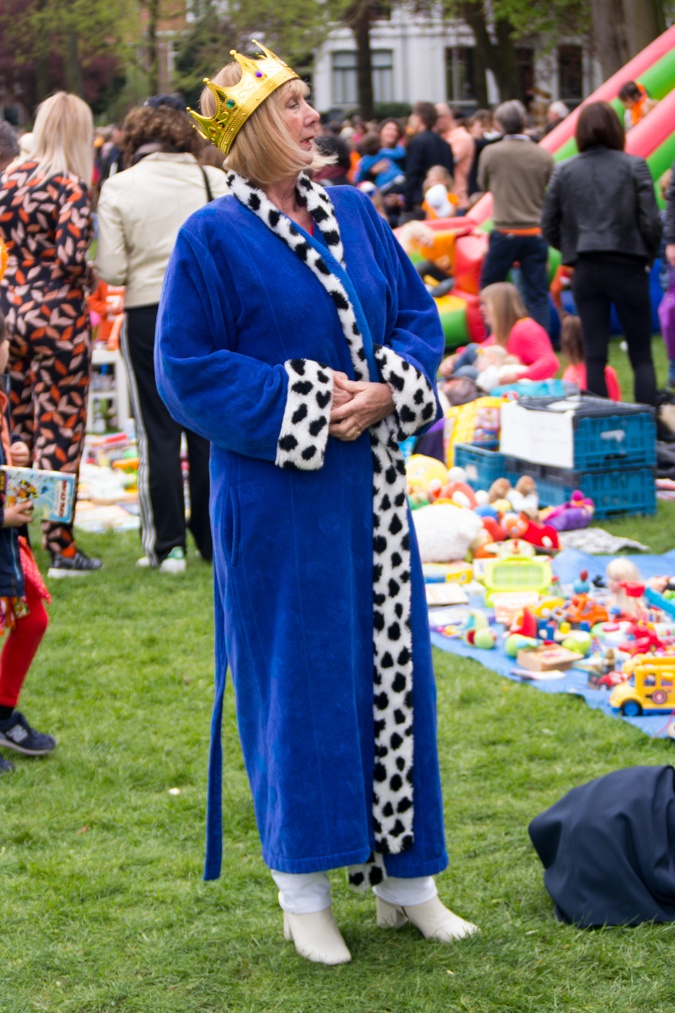 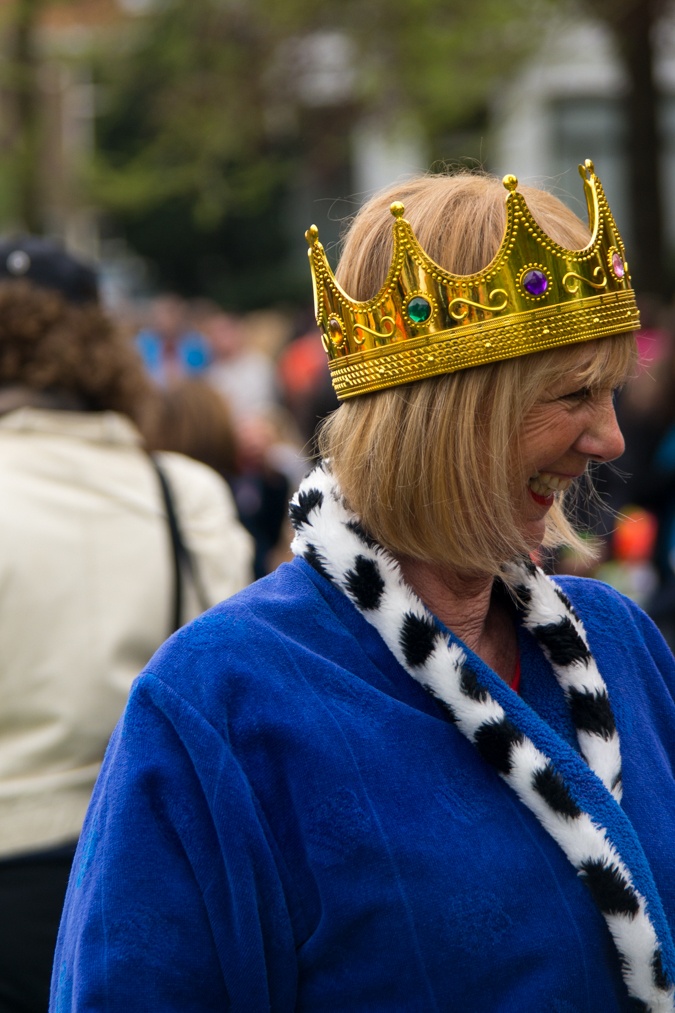 Below: Ron took a little video by accident haha. Only 4 seconds. He was telling me off and I cut that bit out  😆 .

Below: Further down the park a young guy was performing on stage.

Below: He played a catchy song and the children were dancing. 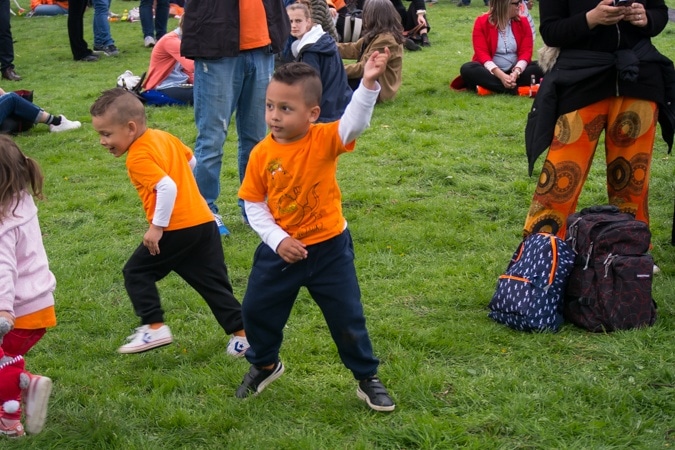 Below: I was just swinging a little bit. The little girl in front of me was really giving it a go, dancing as if her life depended on it. 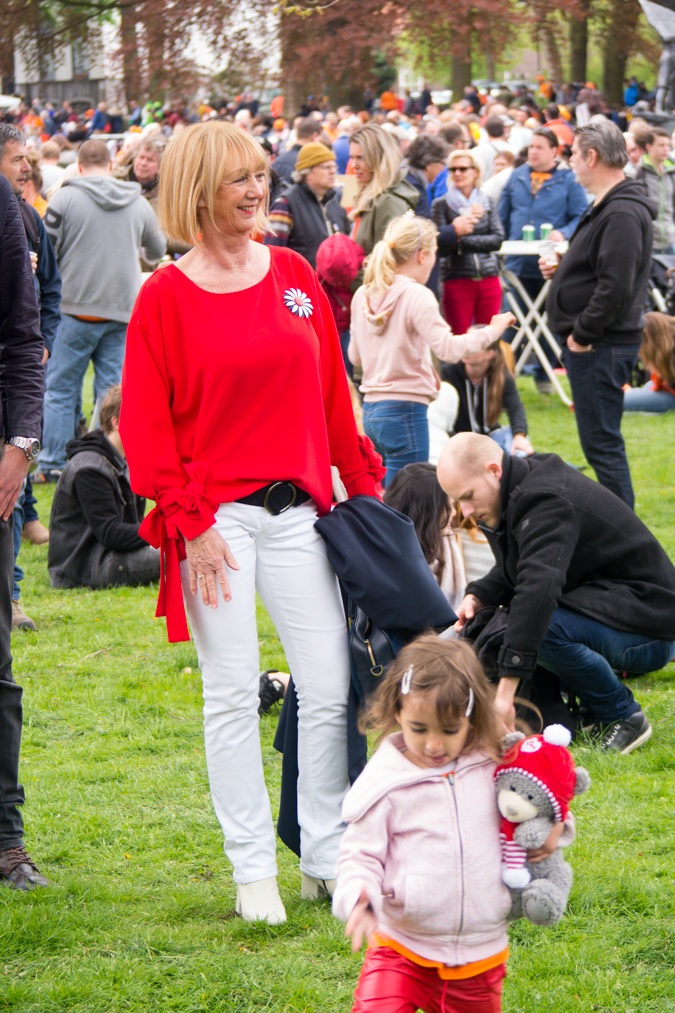 Below: Rats … bow came undone. The ones on my sleeves I just sewed put. If I ever want them loose (not very likely), I will take out the stitches. 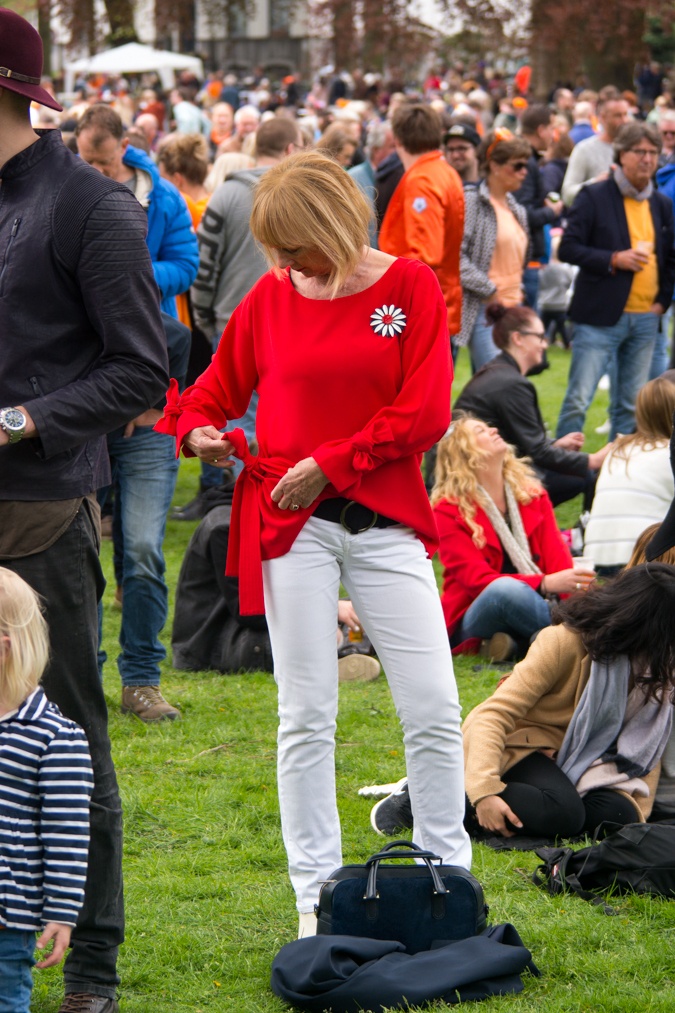 Below: They sell mini crêpes (pancake) here, called poffertjes. The name of the van Pofferdikkie, is a Dutch play on words. 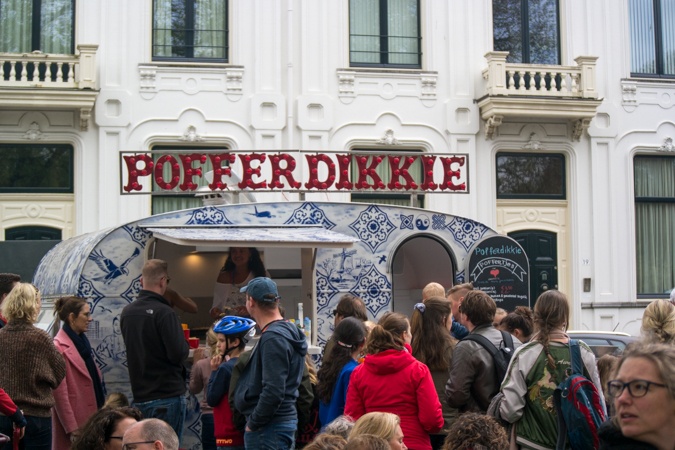 Below: Another cute van, selling barista cappuccino. YAY.. you know how much I love cappuccino. 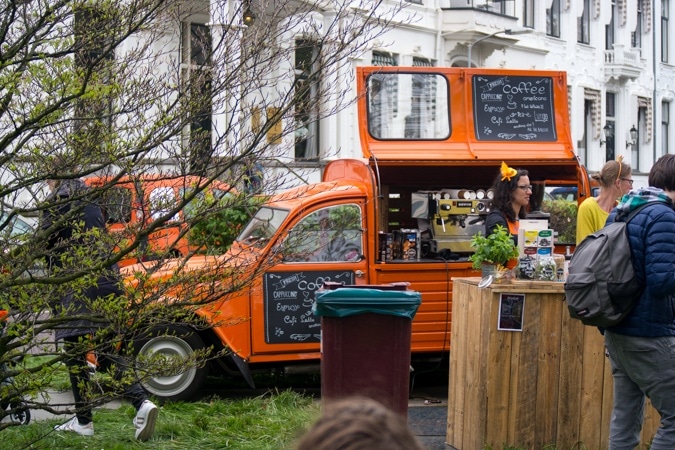 Below: Fully concentrated on my lovely coffee. 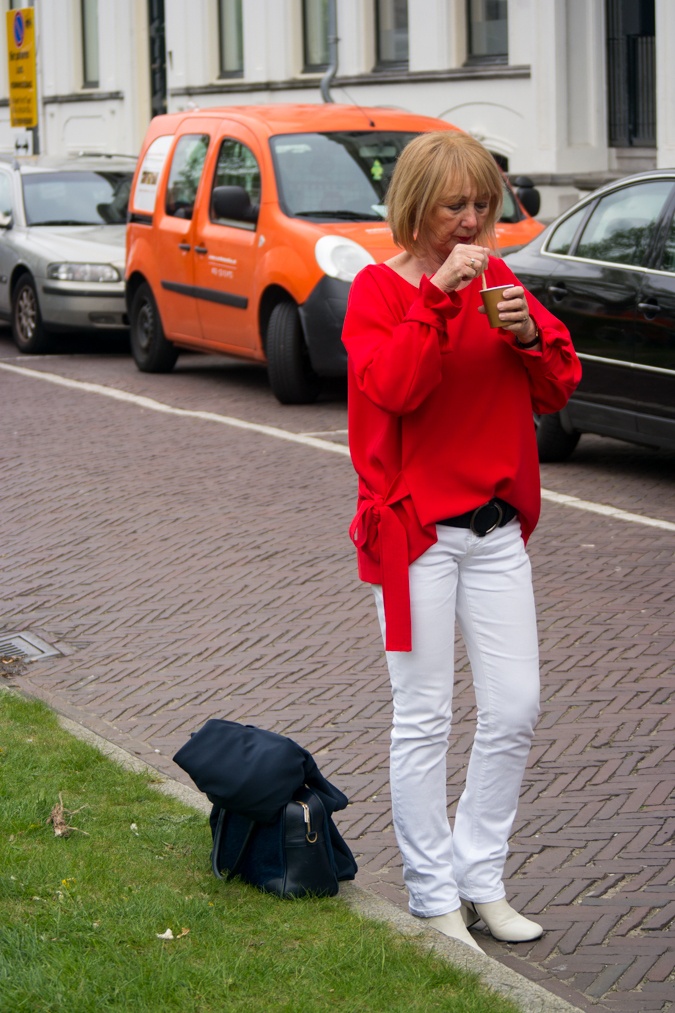 Below: Concentration while I enjoy. On my left hand I am wearing a blue ring. Details darlings, details. 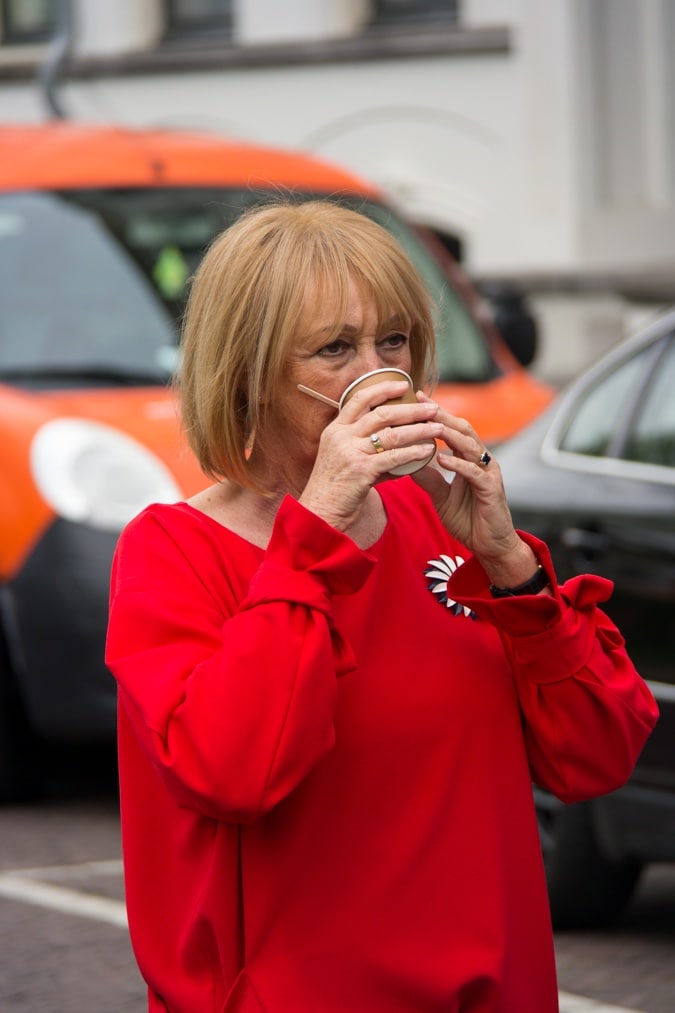 Below: Then I called to Ron who was a bit further away: “Can you take a picture of this?” pointing at my brooch (bought at Bella’s Etsy shop: Citizen Rosebud). Two men passing us, turned to Ron shouting: “Yes, take a photo of her boobs.” I know it was rude but at the age of 64 this remark just made me laugh. I nearly spilled coffee on my lovely top. 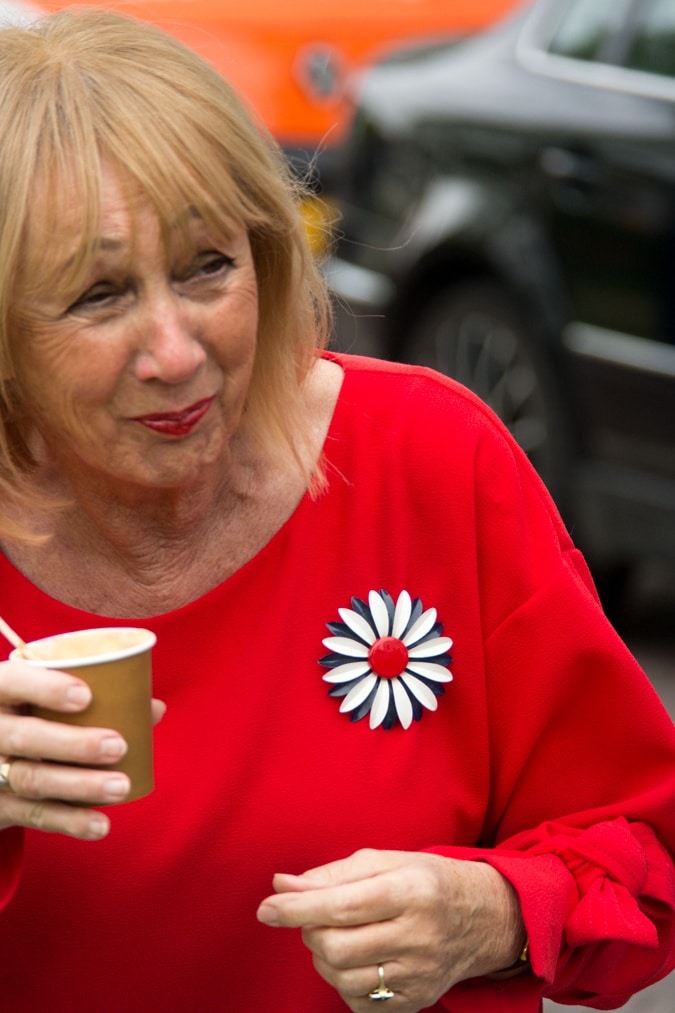 Below: One last shot of how people are generally dressed this day. 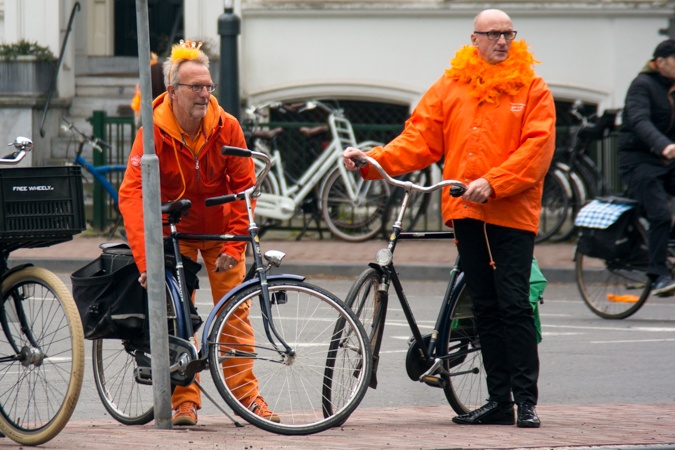 When you want to experience this feast, come to Amsterdam and on the right day: April 27. We used to celebrate Queen’s Day before Willem-Alexander became king and that was three days later. In old tourist guides this day is not updated which means a lot of tourists arrive on April 30th.