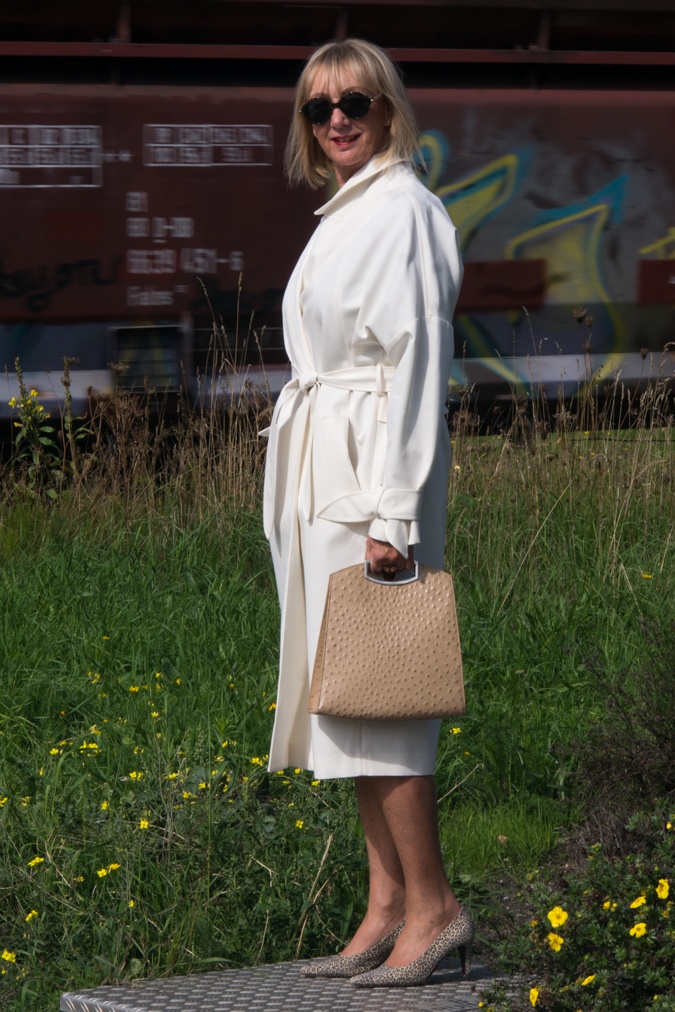 Just looking at this off-white summer coat scares me. I imagine all sorts of stains on it, which will be very, very visible and spoil the “rich” look of this coat. Who in her right mind would buy such a thing? Me, said the idiot.

When it was full price I resisted it. A month later I bumped into a second-hand Burberry off-white trench coat which I bought. Only to find out two days later that the above coat was heavily reduced in the sale (at Studio LM). As a matter of fact it was the same price as the second-hand Burberry one. Regret set in immediately.

My mind did a ridiculous warp with reality: “I would buy the new one and put the Burberry one back into the second-hand sale”. Which I did. When my mind was clear again, I realised that MY take from the second-hand sale would only be 1/3. After all, the owner of the shop has to earn a living too. I contemplated and decided that 1/3 was too little money to let the Burberry coat go. I now have two off-white trench coats. Double idiot.

Crisis when taking these blog photos.

Last Sunday morning I suddenly thought of new blog photos. It wouldn’t have been nice to ask Loes (my neighbour) as photographer. She often works on Sunday afternoons and probably had a lie-in. So I asked my husband Ron to help me with his creative services again. Bad idea.

The camera wasn’t producing any sharp photos whatever I tried. Drives me nuts…. when a device, machine (camera, computer, car.. ) does not work, it sends me into a fit. (Although the “not working” is my fault of course, I always blame the device.) I suppressed the fit but probably not entirely. Ron doesn’t like taking my photos anyway, so when his efforts seem futile due to faulty equipment, he gets angry too. Long story short: we won’t do this again. For the sake of our marriage.

Ron showed me several location options which I all declined as they were yellow (for instance yellow sand). My blond hair against a yellow background is terrible. Oh those days when I was a brunette… much easier.

He did have one last location idea: brown trains. Good idea. When we arrived where he had seen them, they were moving!! Just our luck. We did manage to quickly take a few shots but we didn’t have enough time.

Below: My hair wasn’t cooperating, and Ron says that the coat looks like a bathrobe in this picture. Tsss… although he has a point. Higher heels would be better. Or jeans with the coat. Or a scarf. The brand is Les Coyotes de Paris. 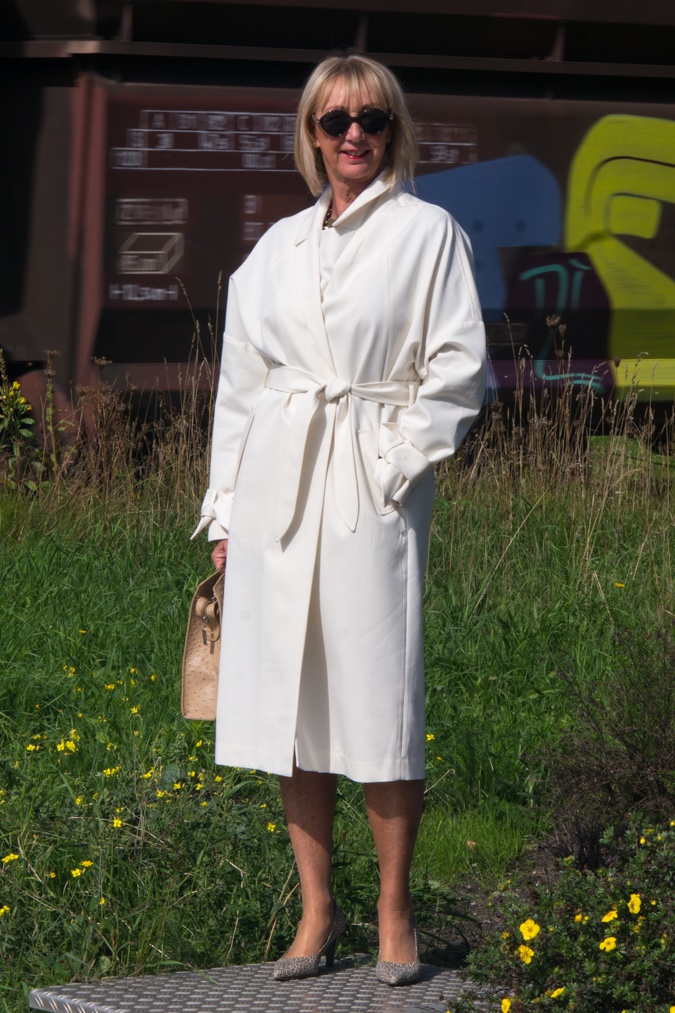 Below: Close-up of the bag. It is an ostrich print on leather. Not real ostrich. And it is ancient. See the detail on the sleeves? Don’t think it is very practical but it is different. 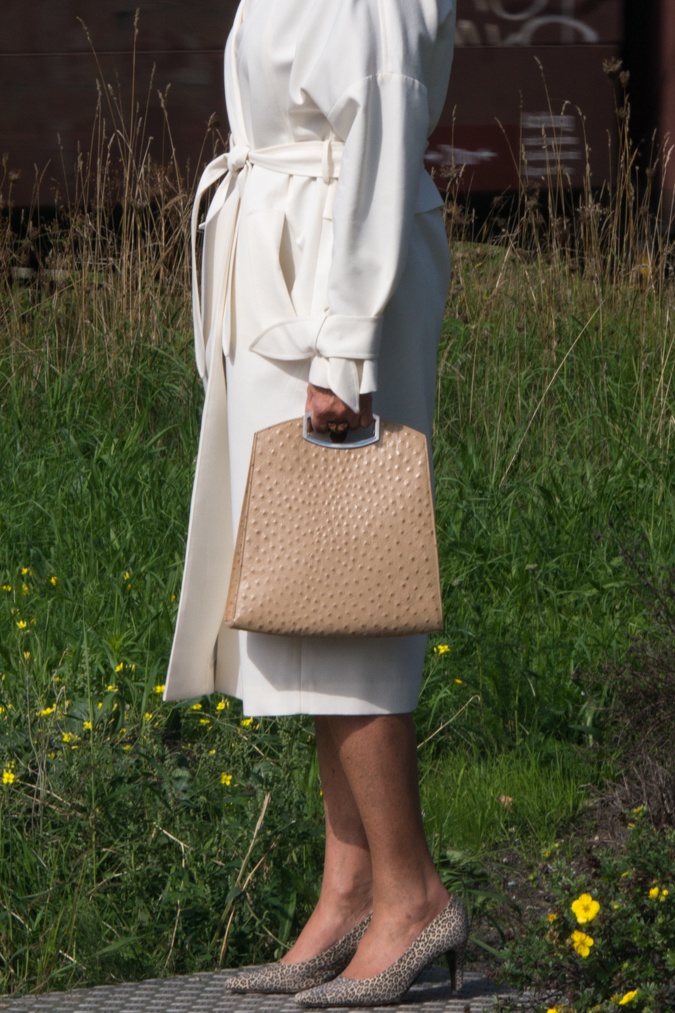 Below: Near the rail track was a road with trees. Always nice. Most of the pictures were too blurry though. The one below is not too bad but misses my feet. 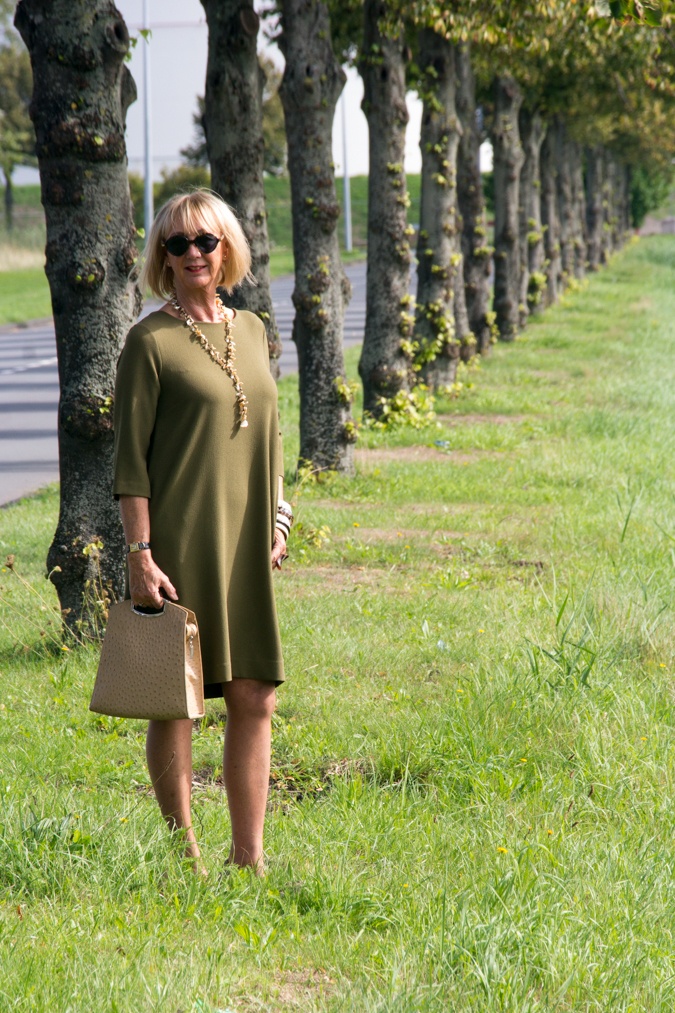 Below: We had another option. A blue/green background. Blue is good! 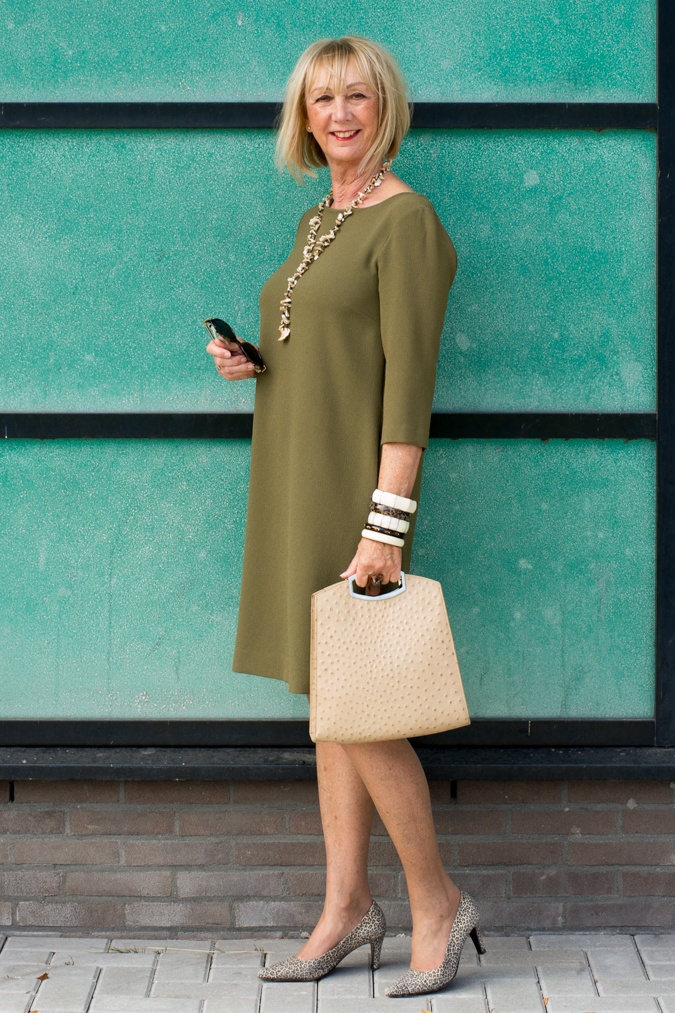 Below: Outfit details. The dress is second-hand from Today’s Vintage. I paid € 19. Three days later I saw exactly the same dress when shopping in Cornelis Schuytstraat, for € 119,-. Nice deal. The necklace is quite old and from Paris. The bracelets are all second-hand from various shops. Leopard shoes: old, by Panara. 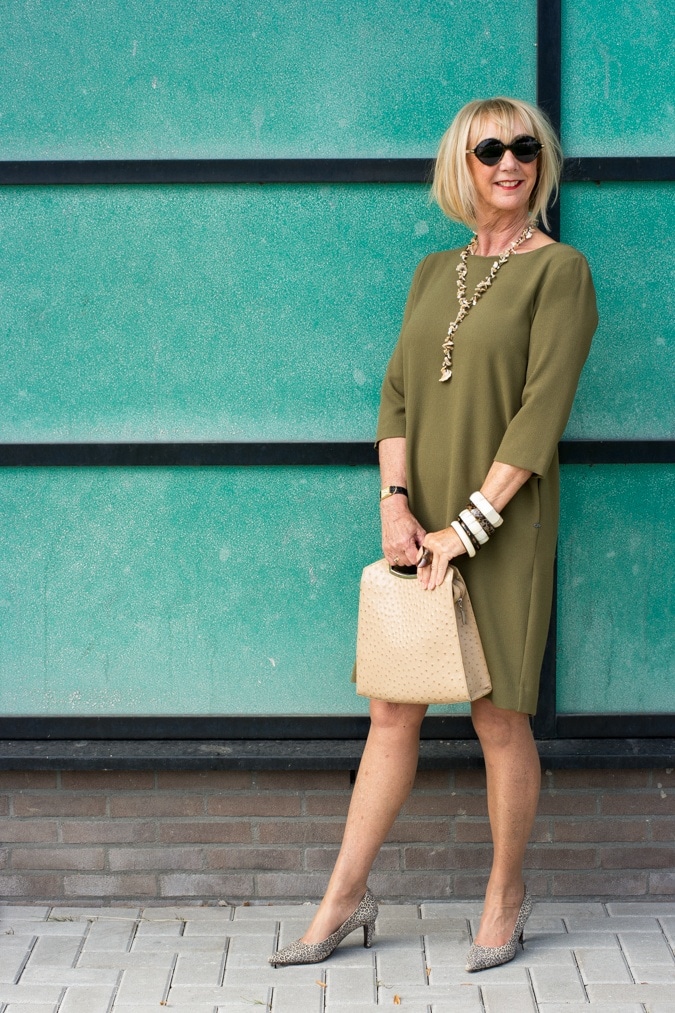 Below: Close-up of the shoes. 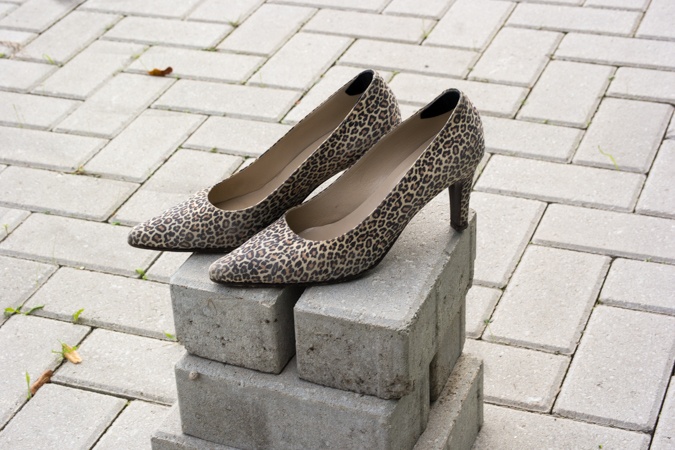 Below: Close-up of the bracelets and the ring. 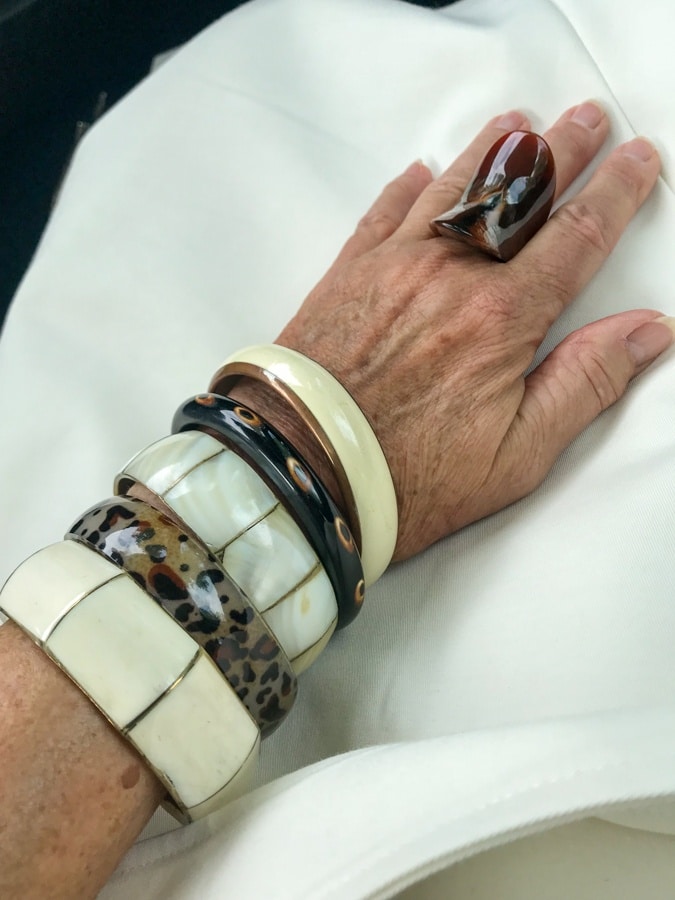 Below: One last shot of the outfit. Sorry I haven’t got more variation. 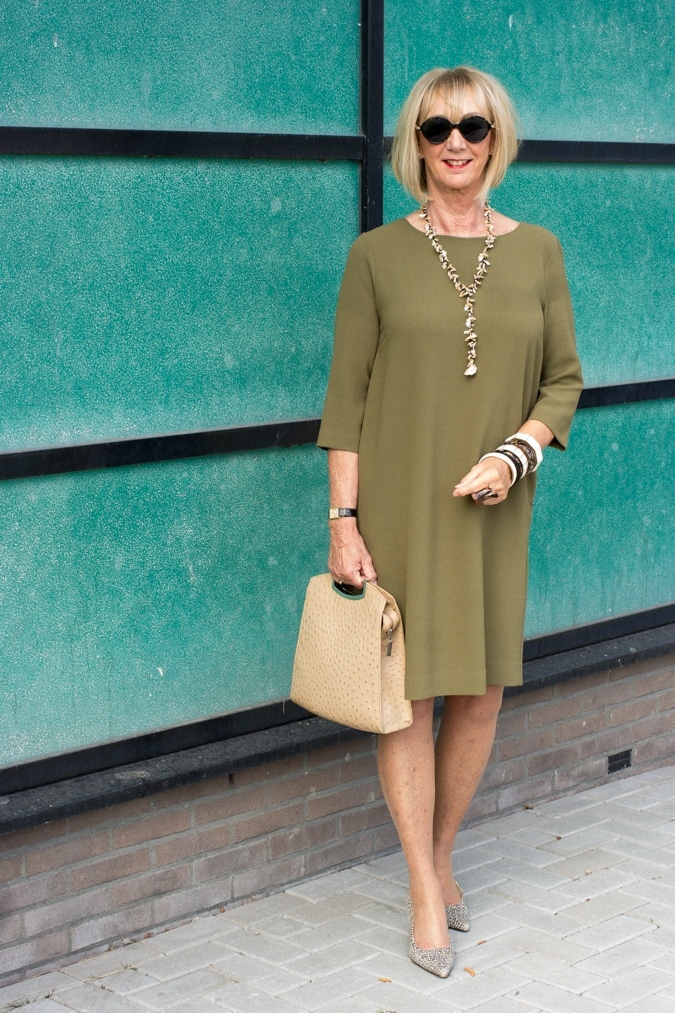 I worked my ass off. Pardon my French but I really had a stressy week doing much overtime. The project that was stopped and then revitalized again, was even worse (planning wise), than when we first started. Plus Murphy and his law had to come in 36 hours before the final deadline. A lot of things which were already finished had to be done again because of various reasons. I HATE STRESS. How I ever got myself in a job which is ruled by deadlines (advertising) beats me. I love this type of work and I think I am not half bad at my job either (modesty is overrated I think). But deadlines? Stress? No thank you.

Which means I haven’t had much time to do anything or see anyone. Had a farewell lunch (sushi) together with my colleagues to say goodbye to the lovely account director of the advertising agency. She is leaving for South Africa with boyfriend and dog for an indefinite time. She was good, really good and has a lovely personality. We will miss her dearly. Didn’t take photos as people usually aren’t too keen on seeing themselves unedited on the internet. So no photos of the farewell drinks that same afternoon either (for another lovely person).

My friend Marianne, one of the BVA girls, surprised me with a gift. A super duper gift. It is rather personal why she gave me this. Please don’t hold it against me if I don’t tell you. When it is just me, you are allowed to know nearly everything. But when other people are involved I want to protect their privacy. She bought me a Chloé mini crossbody bag, the Marcie. I had my eyes on that one for months. You will see it soon. It is on its way.

I was going through some old photos and found a bunch of the celebration of my 50th birthday (14 and a half years ago). Oh gosh, they were sooo bad. I look like a right idiot. I decided to show you the two below.

Below: Short hair and lots of rouge is not a good look for me. Even in those days a cleavage was not a good idea. I think I should count myself lucky with all the wrinkles in that area. At least now I don’t ever expose myself like this anymore. 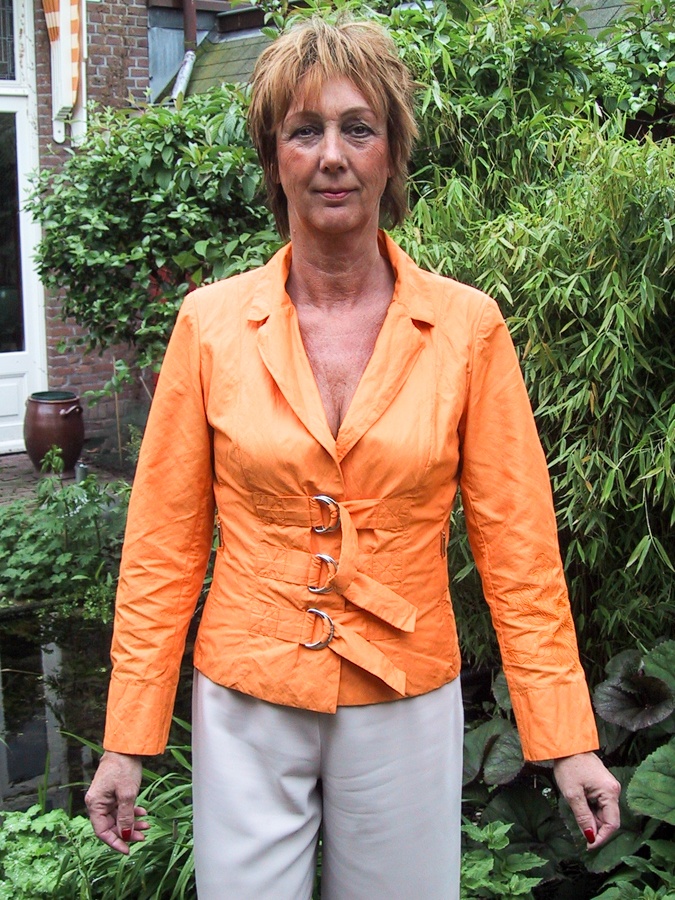 Below: Now do you get it when I say my figure is shaped like an inverted triangle? These clothes were not doing me any favours, to put it mildly. Know your figure, your strong points, emphasize them, and the bad ones, try and camouflage them. With these clothes I did exactly the opposite. 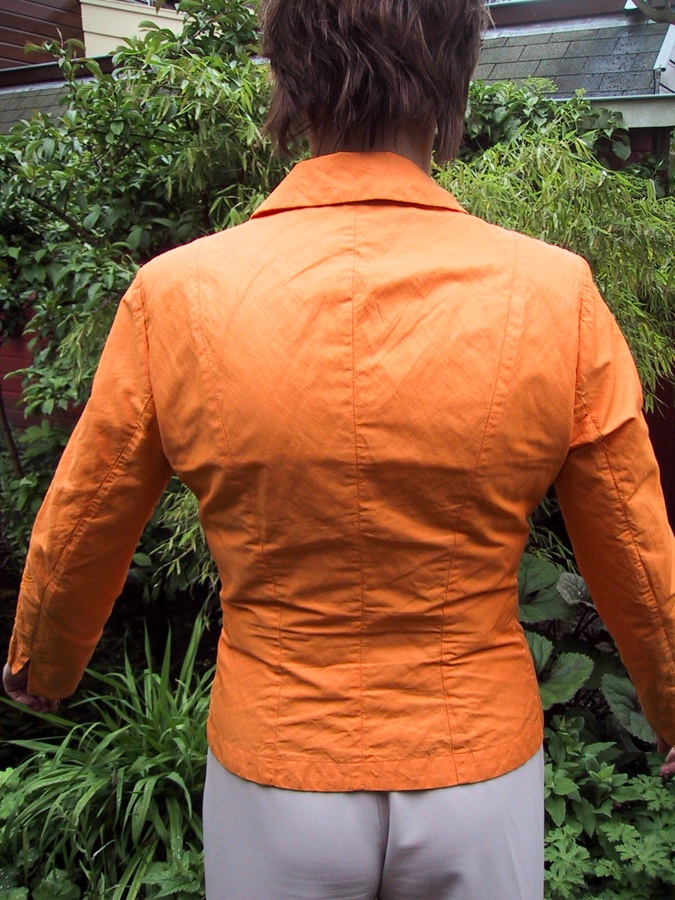 Saturday we had a street party. The only organization involved is announcing the date (many of the neighbours are in a Facebook group of our street), a month or so in advance. And on the day itself, around 4 p.m., all neighbours put chairs and tables outside. Some cook, some bring crisps or wine, whatever. And we chat. We have been doing this for a number of years now. Always so nice. The weather was cooperative (dry and sunny) although not too warm.

Below: This is what I was wearing when we started in the afternoon. I had worn my new orange ankle boots earlier but they are still in that stage of breaking in. Besides, sneakers are much handier at a street party. I managed to wear a scarf without looking as if I am strangling myself or am having a bad cold. I might get the hang of it after all. 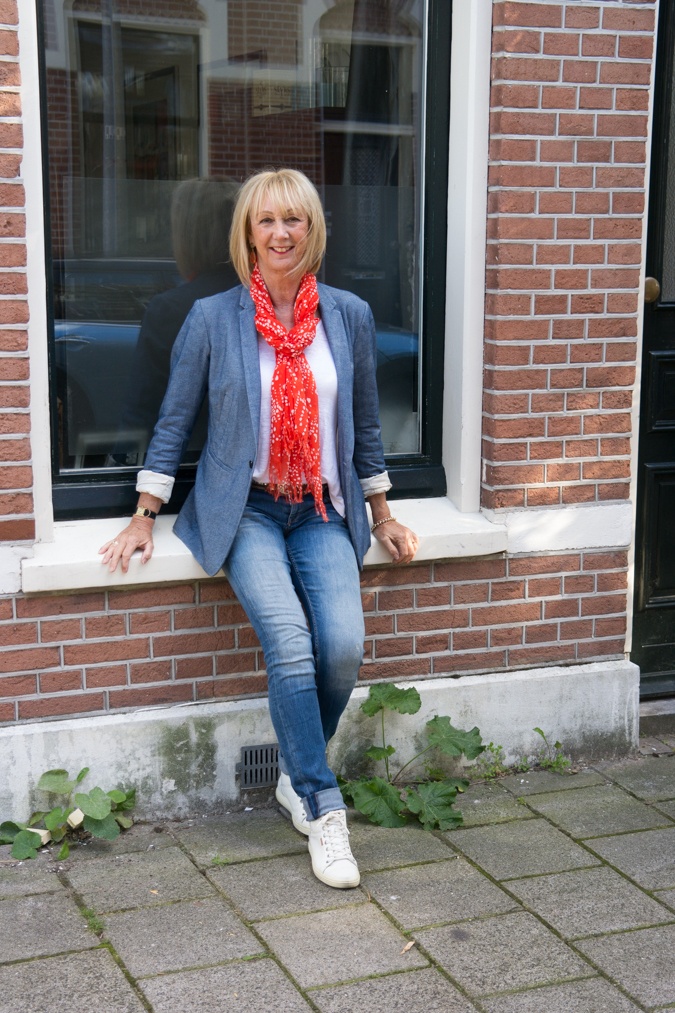 Below: Ron was wearing a leather apron. I blurred the faces of our neighbours. They might not want to be on the blog. 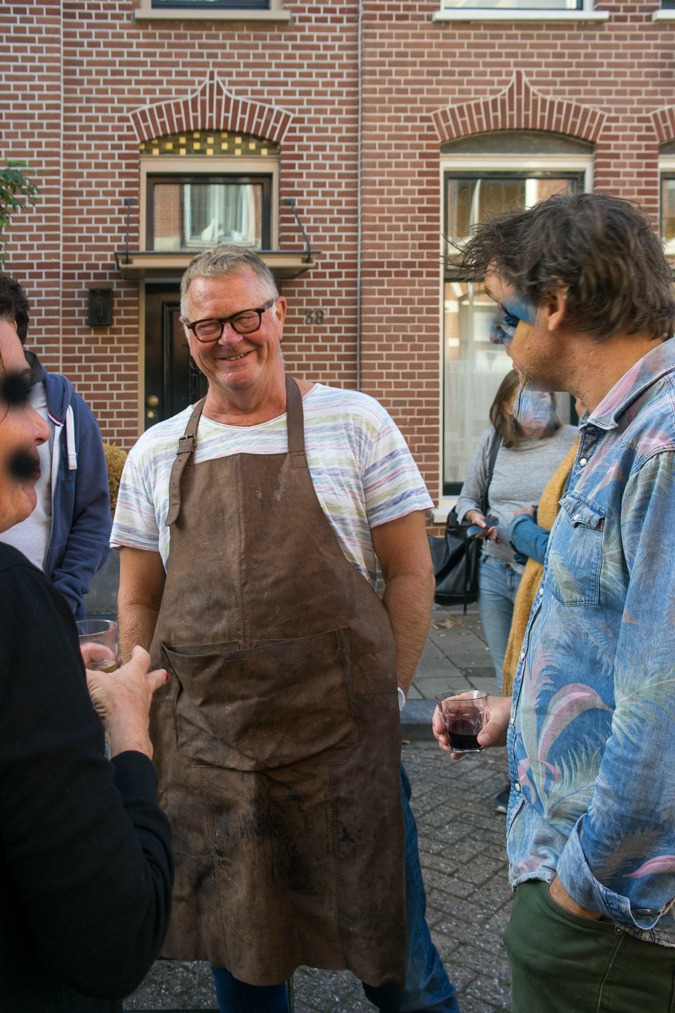 Below: Ron was cooking lam stew in this pot, hanging on a tripod. 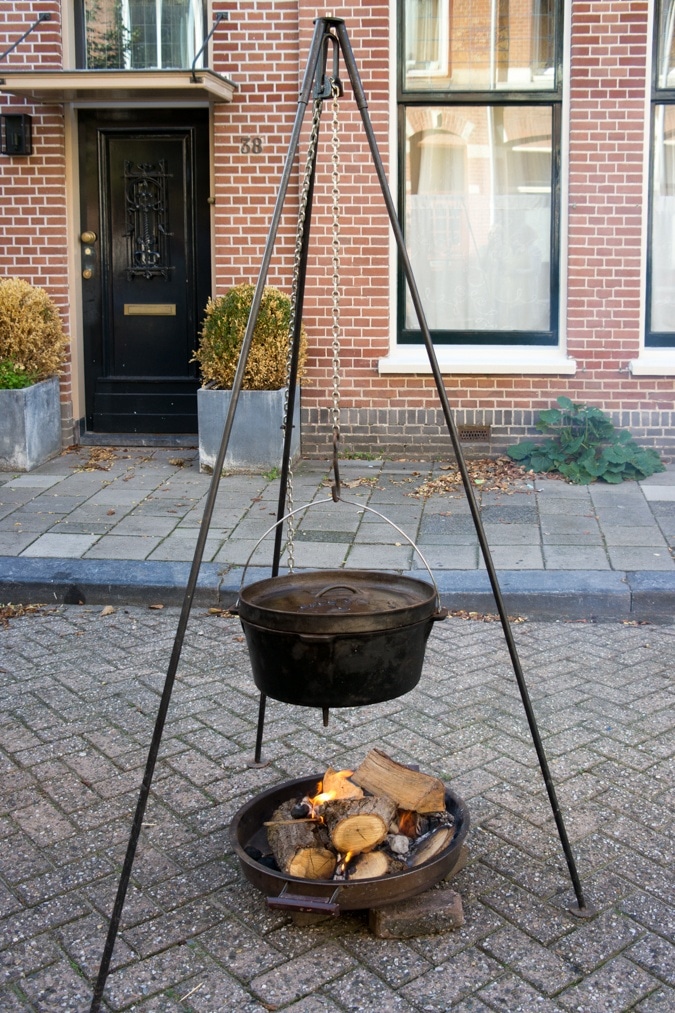 Below: When it cooled down, I changed into a thicker blue top with yellow/blue cardigan. My hair was not at its best anymore. 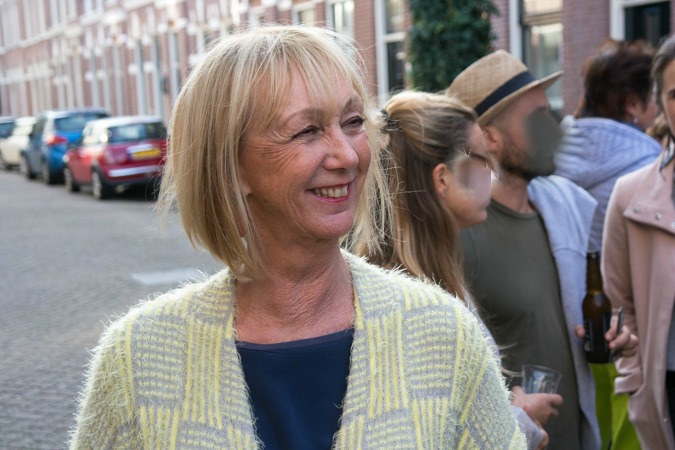 Below: It was very lively. This is only a small part of the street and the neighbours. There were more tables and chairs and a bouncy castle for the little ones. Loads of food. People just bring stuff and there is always too much. Nice variety though. 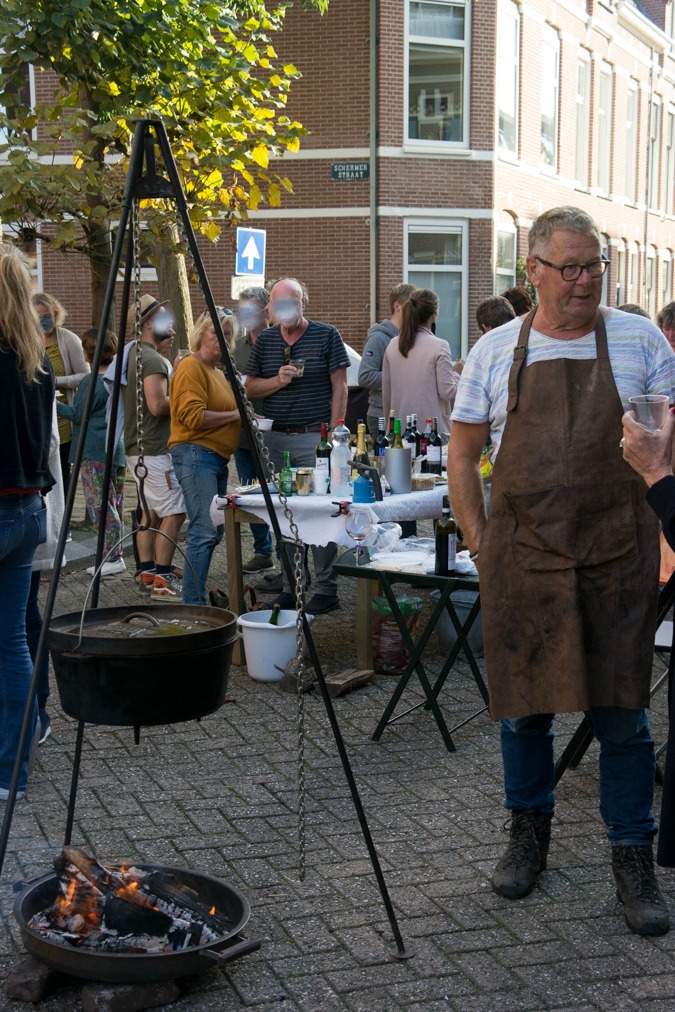 Below: This is the lam stew. 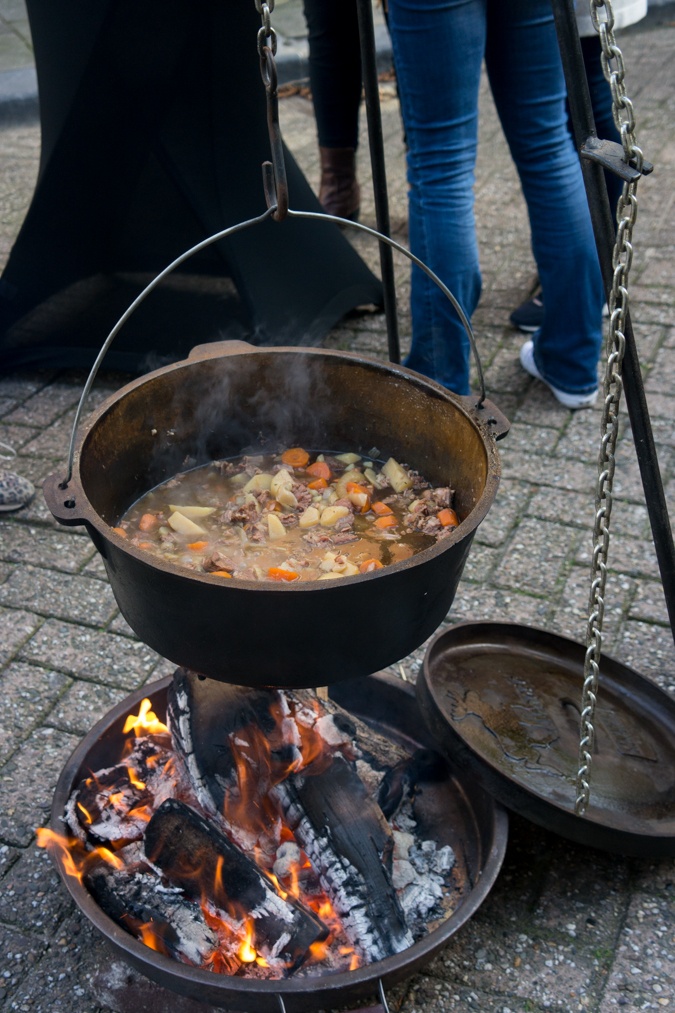 Below: There was a cake competition as well! Every year judged by the youngsters in our street who announce the winners and hand over the awards. Made a great dessert. Such a shame I cannot use one of the many photos of the little girl who was determined not to leave the cakes out of sight haha. 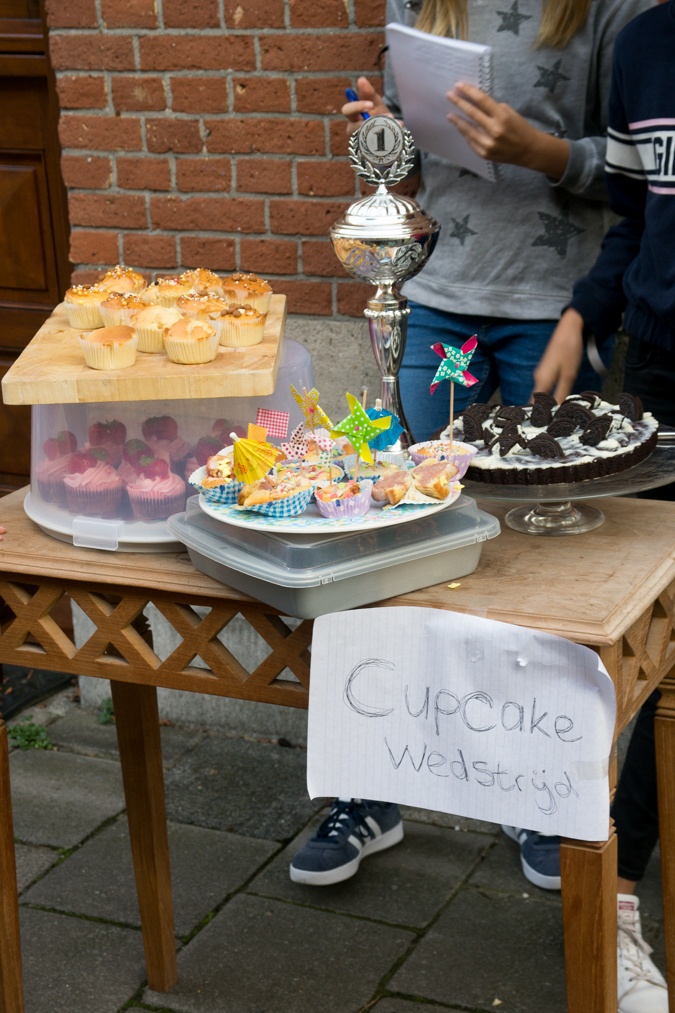 The quality of the food and the cakes was (again) excellent this year. But better yet was the chatting with our neighbours, the getting to know one another. I can recommend this initiative to everybody.

I got blog help.. hurrah!

At the street party, I was talking to Kitty, one of my neighbours who is a photographer. When I mentioned my blog (I bore most people with talk about my blog), she spontaneously said: “I would love to take the photos for your blog”. I mean… how lucky can I get? Now I have two photographers helping me: Loes and Kitty. Both living in my street. We had a little get-together about it. Very handy for me if one or the other has no time. You would think it doesn’t get much better, right? But it does.

Out of the blue, a reader emailed me, saying she read in a comment I was looking for a native speaker who would like to edit my posts for English mistakes. (For free of course, as this blog doesn’t earn me a penny.) She volunteered! Out of this world! Her name is Selina, she is from London and 30 years young. Not even my target group.

I have no words for all this kindness. I am very very grateful.

Kitty and I have already done a photoshoot today. You will see the result next week. I wore a highly visible trouser suit. Loes loved it. Hope you do too.