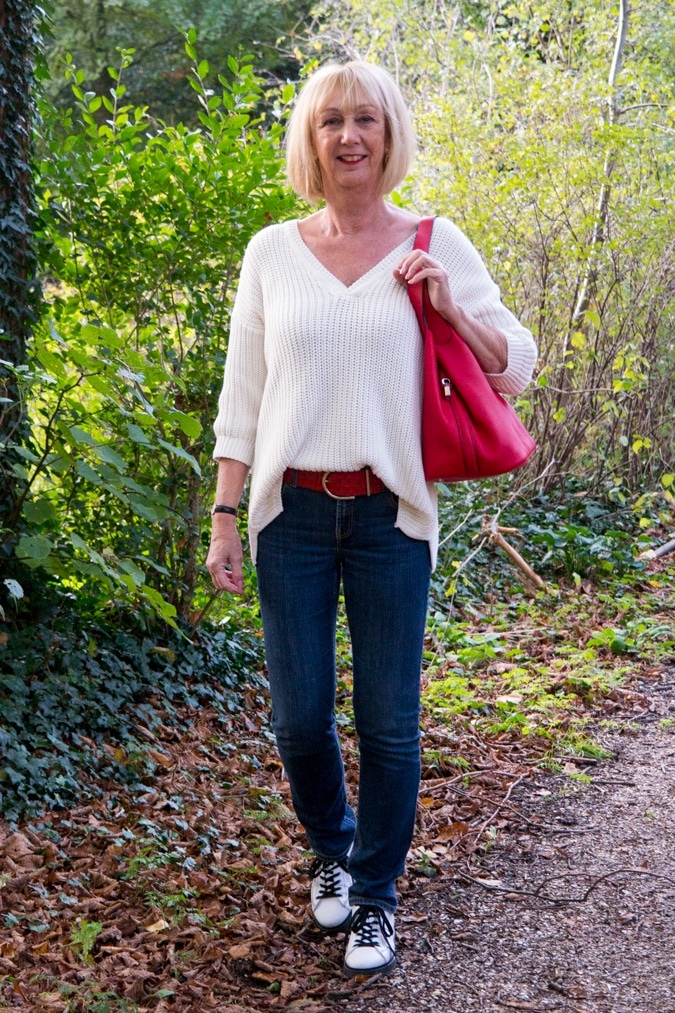 Is this casual outfit the right background to show this pretty red tote bag? Or does it deserve a cute dress to shine? If the latter, no fear, I am sure you will see me with this bag and a dress as well. It is that pop of colour which so easily boosts an outfit to a higher level of attractiveness. (By the way, my blog is getting a make-over. Work in progress.)

My darling husband Ron offered to take photos again as Loes and Kitty were both too busy with work to do a shoot. As we all work full-time and all have lots to do in our free time, it is always a challenge to find a mutual date. Ron surprised my with his offer as I thought it was over and out with blog photos by his hand. When he heard that I did not have enough material to last until “my” photographers were available again, he stepped in to support me.

It was the end of the day, the golden hours, and fall in a park provided a lovely background. Plus Ron could walk the dog (Charlie) while I waited in the car.

Below: That little white bridge provided a good background. We tried to persuade Charlie to cross this bridge but she started shivering all over. She doesn’t like water beneath her. Bridges, the harbour, the boat, she loathes them all. So sad for Ron who had this romantic idea when Charlie was a pup to go on long advertures with the boat, and Charlie doing a Titanic pose at the front. At first we took her with us on the boat and tried to make her feel at ease, but no such luck. Is it because she was born November 3 and never experienced the boat and the harbour when she was in her first 12 weeks with us? Or is it just her? Ron thinks it’s the first. Anyway, she is now 12 years old, she will never lose her fear. We went the other way. Happy dog. 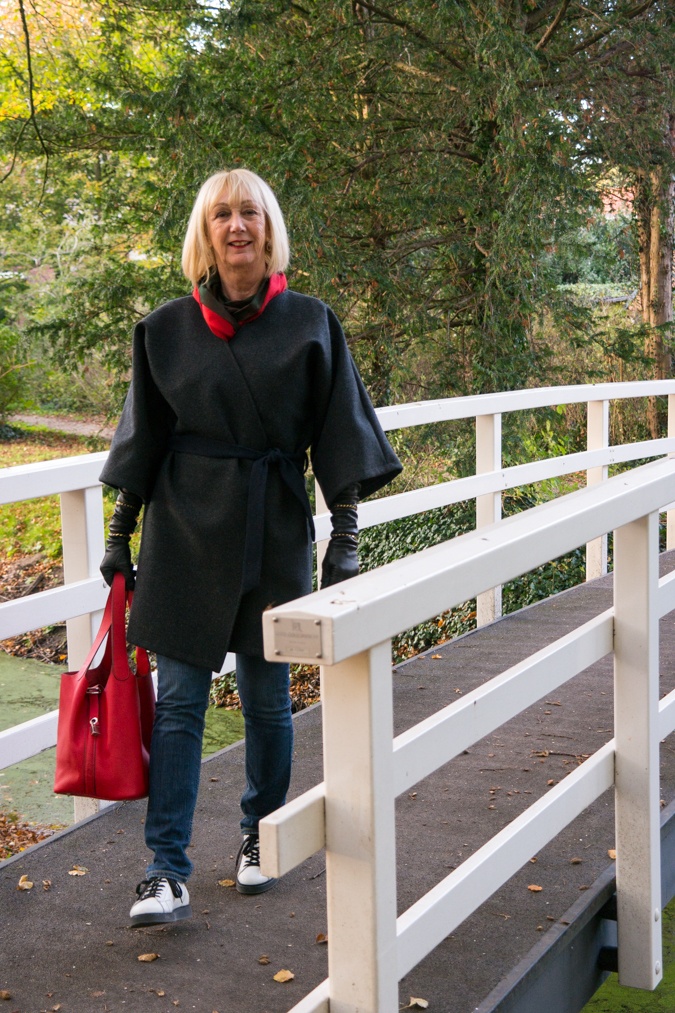 Below: This is me in shock as I had left a bag on the path and Charlie, being practically blind, tripped over it. Stupid me. 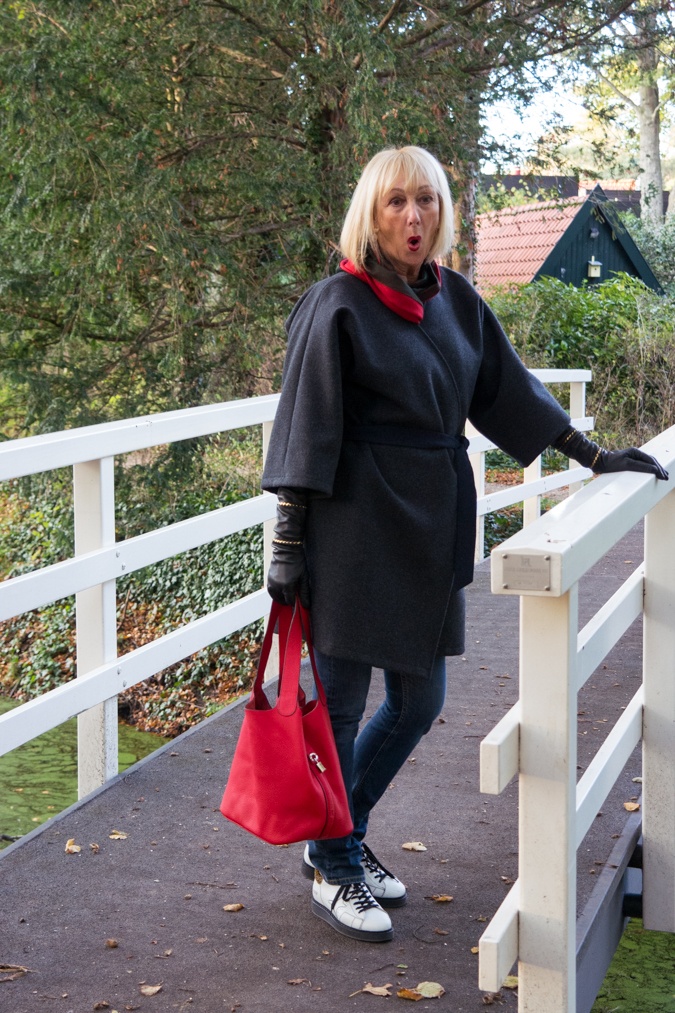 Below: There were farm animals in this park. I was talking to a cow. Ron said he didn’t want to take photos next to a sign that says: “Please do not feed because of rat problems”. The sign on the back of my jacket is a gimmick of the designer. Not some label I forgot to take off. 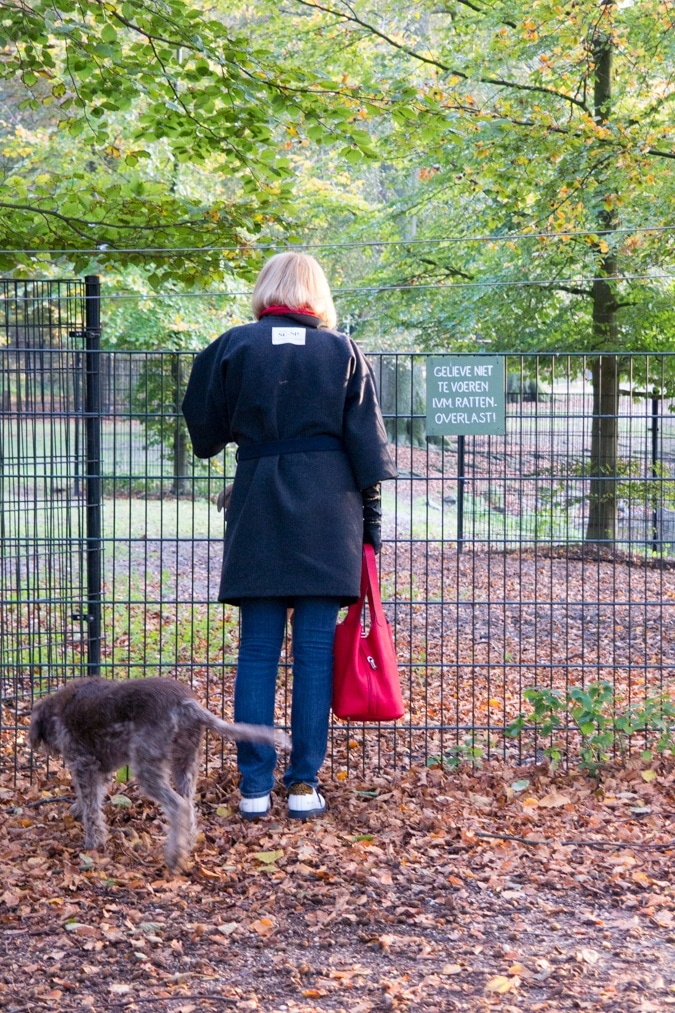 Below: The kimono coat was a find in Paris at a boutique in Le Marais, The boutique is called Addicted. Great little shop with reasonably priced items by young designers. The black leather gloves are from a small shop in Paris and cost me an arm (pun) and a leg. 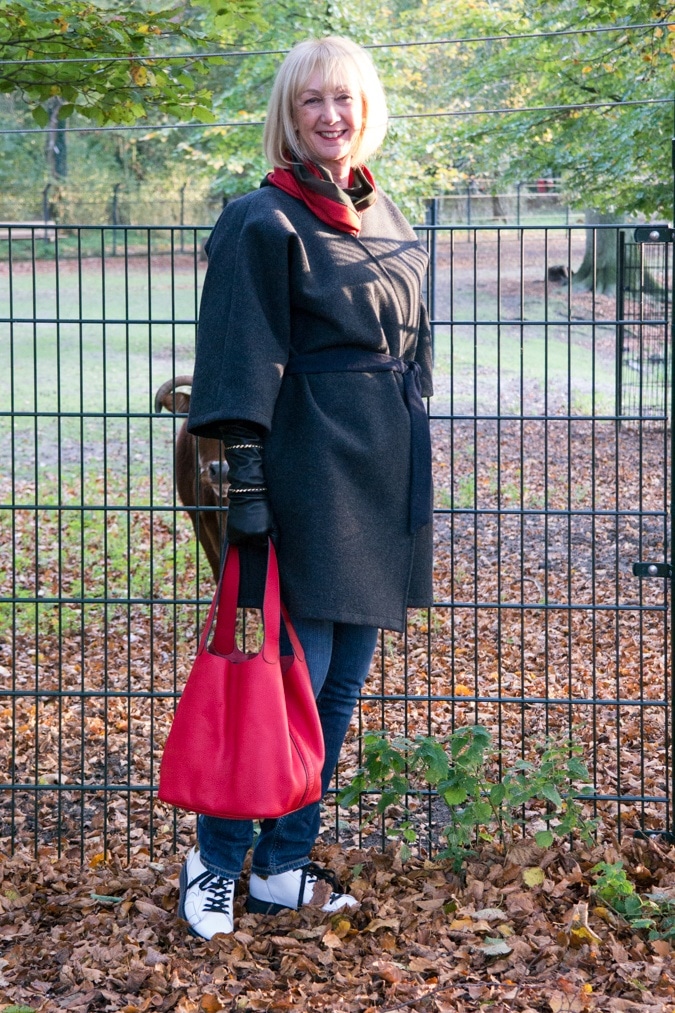 Below: This was the cow which I was admiring. She strolled off and however nicely I spoke to her, she just gave me a disparaging look and left me looking at her behind. 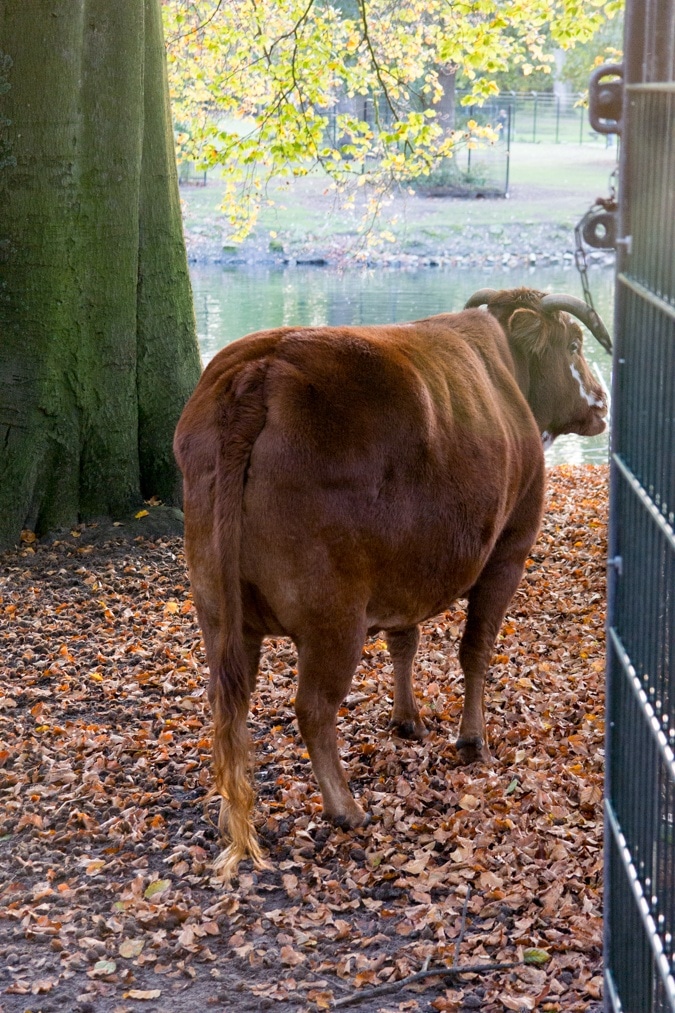 Below: It was warm enough to take off my coat. The sweater is by Bellamy Gallery, the belt is old, the sneakers are a great find at LAB Women’s Clothing. Brand: Ama-brand.

But the piece de la resistance is of course the red tote bag. My blogger friend Nikki of Midlifechic designs bags which are produced by craftsmen in Turkey and sold in her online boutique. When she showed this red example I was sold. She still has a few ones left and also sells adorable clutches. So if you are looking for Christmas presents… Midlifechic Boutique is worth a visit. Just saying. 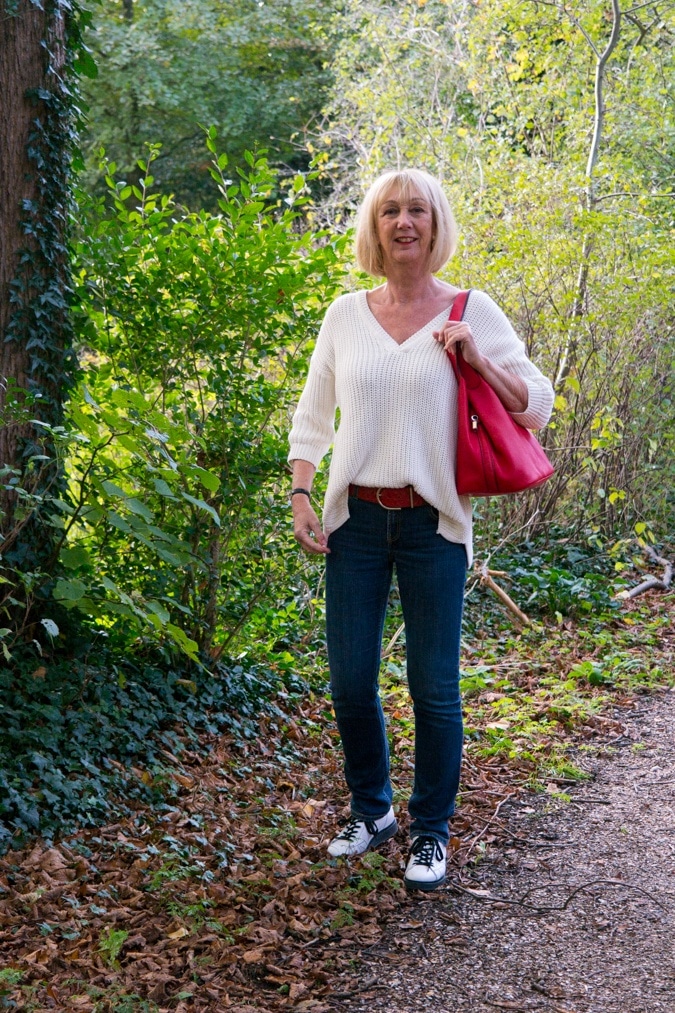 Below: View from the back. This sweater is a perfect replacement for the white one I had last year. That one was ruined by spray dye. 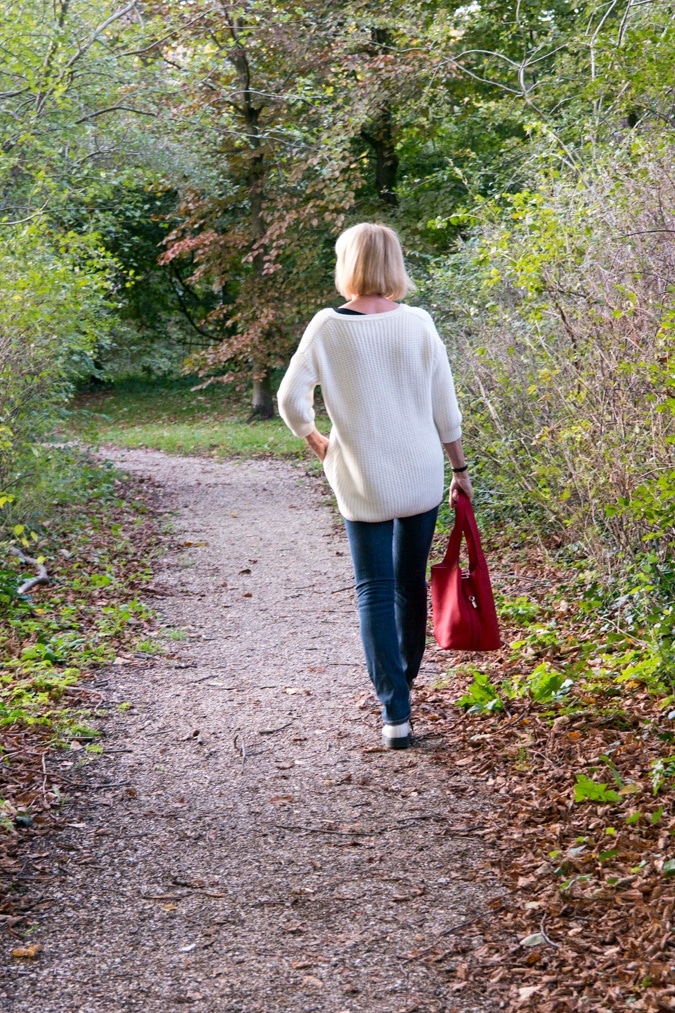 Below: A little path led to a dark shed. Dark backgrounds are good with my blond hair. 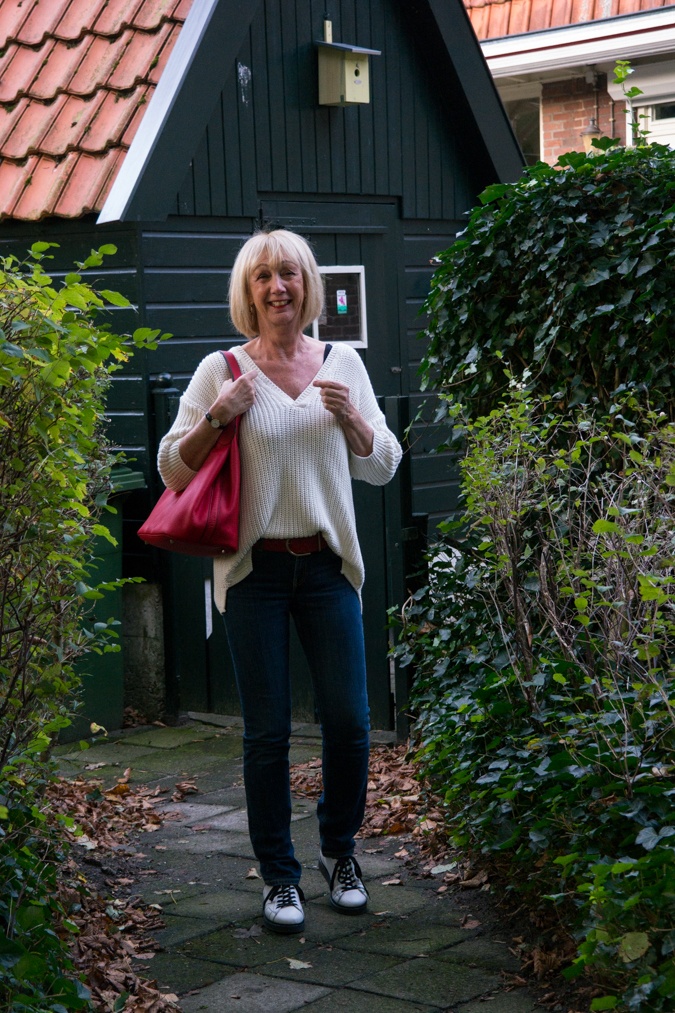 Below: I wanted to pose by leaning over the little parapet….. 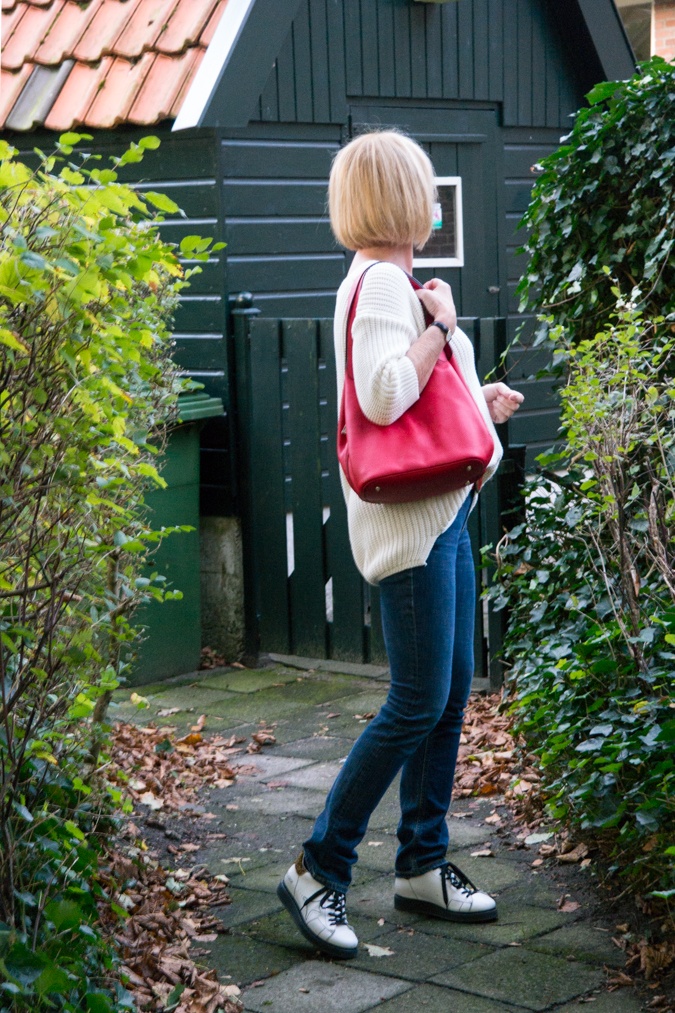 Below: As I did, I suddenly discovered a woman in the kitchen at the other end of HER garden. Oh my, how rude of me…. I bolted…. 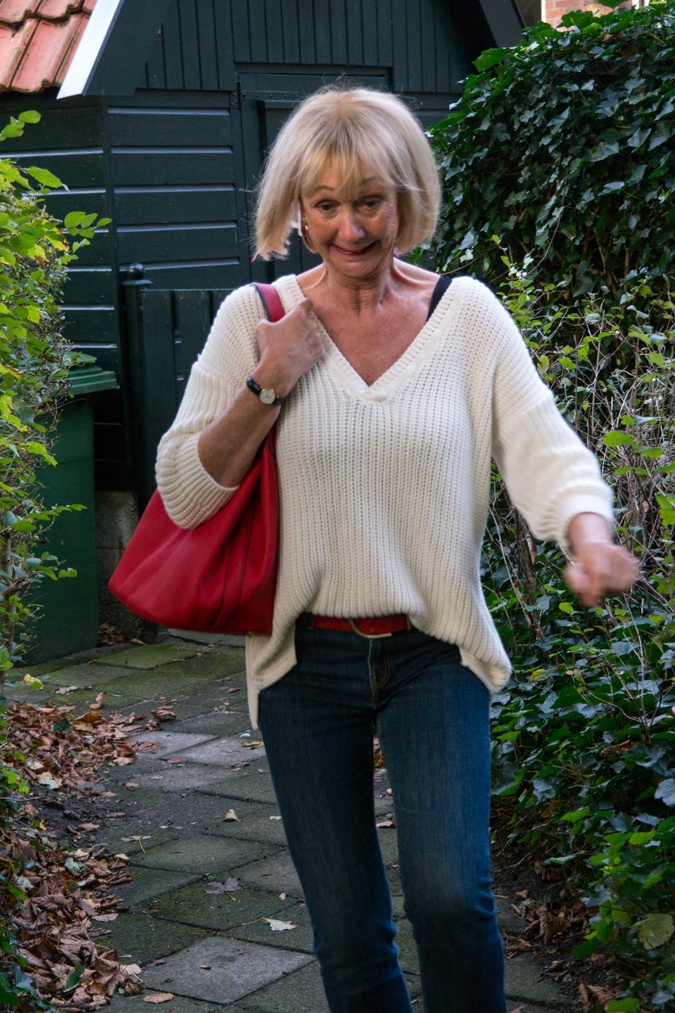 The woman came to see what I was doing. I explained my actions, she laughed and said she thought we wanted to tell her a deer was near her garden. Apparently that happens frequently.

Ron let Charlie run around while I waited in the car (Knee) and as we drove home he suggested the little town of Bloemendaal might have some nice backgrounds as well.

Below: At the florist. 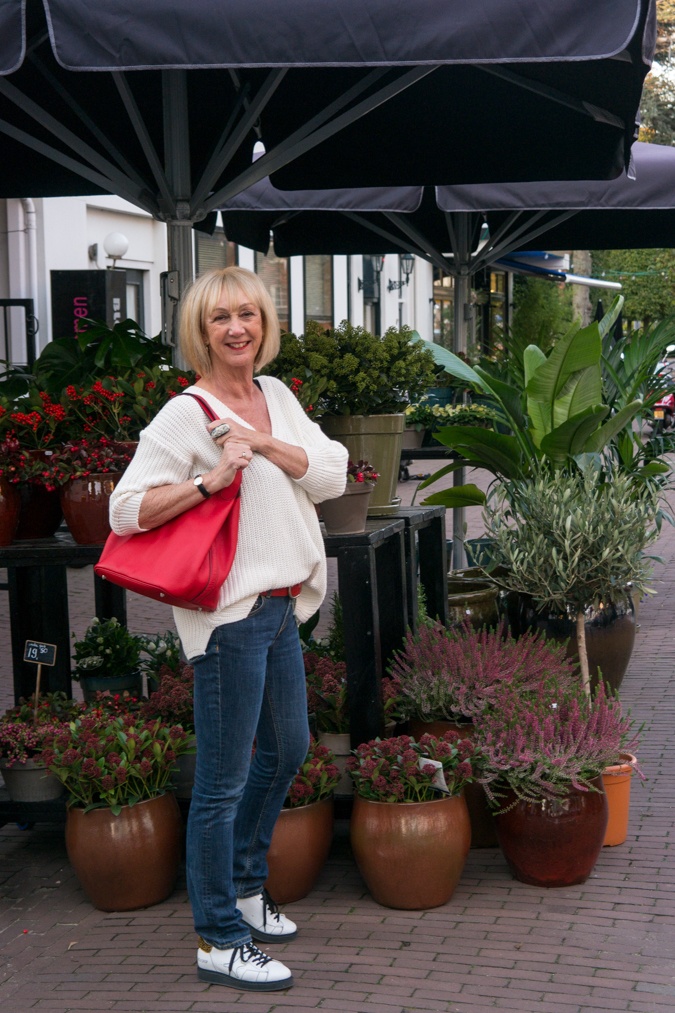 Below: I forgot to put on the ring in the other photos… here it is. 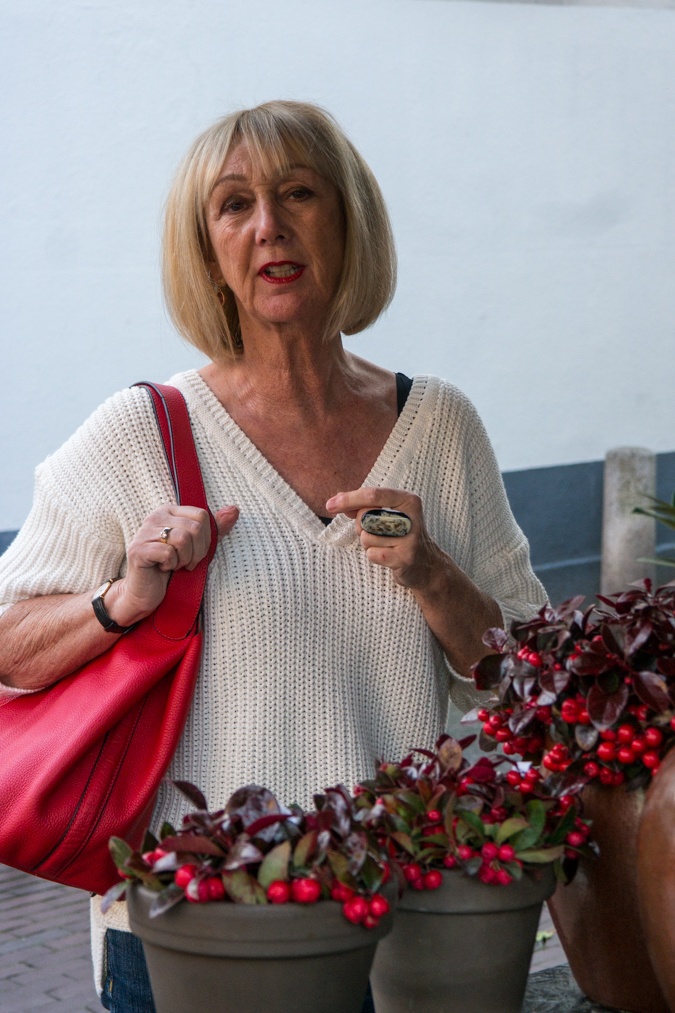 Below: “I mean… what are you on about? You put me in a street with shops. Not my fault!” Actually Ron quite liked the black and white skirt in the window and suggested we go in. 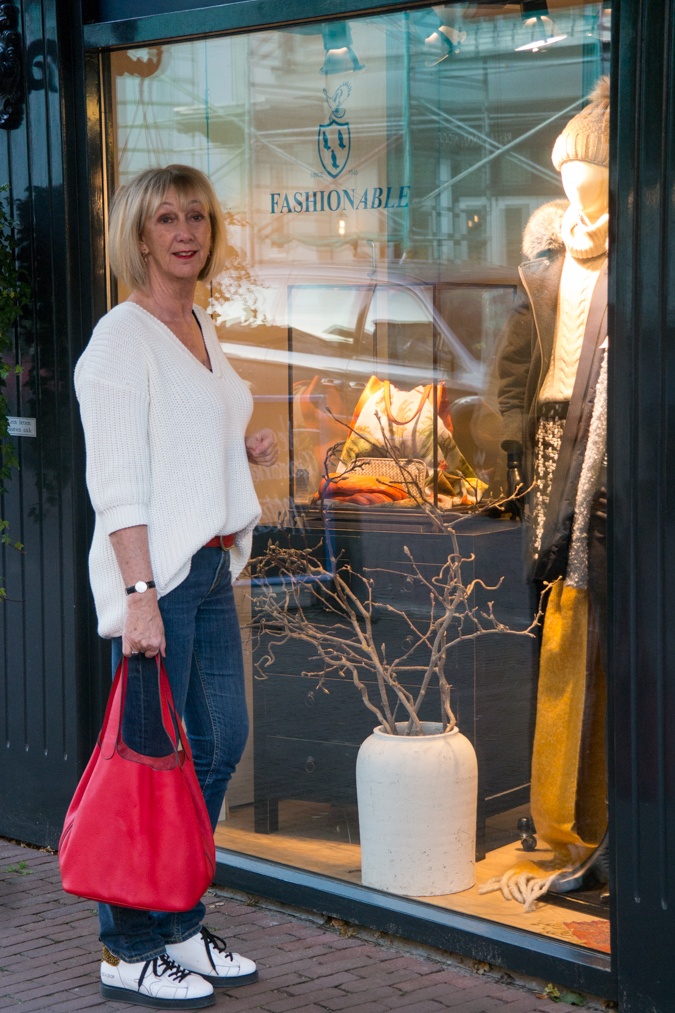 Below: Before trying it on I had to ask for a plaster as I had cut myself. No idea how. The lady of the shop kindly supplied one. She looks worried but it was just a little cut. 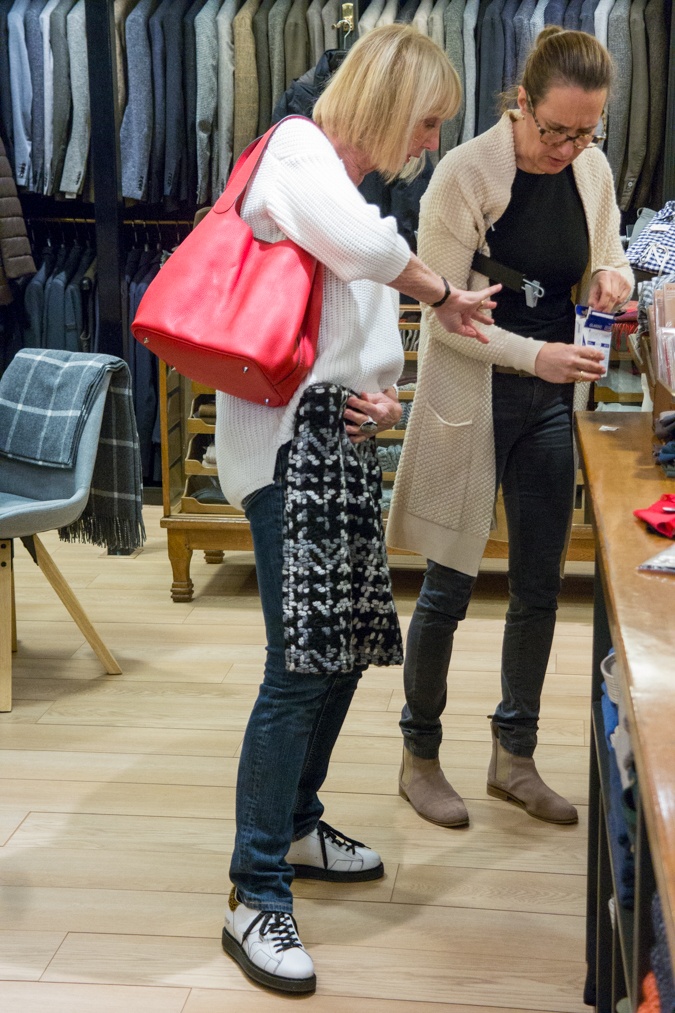 Below: The skirt was too big. Pity. I thought it would look good with opaque tights, these sneakers and this sweater. 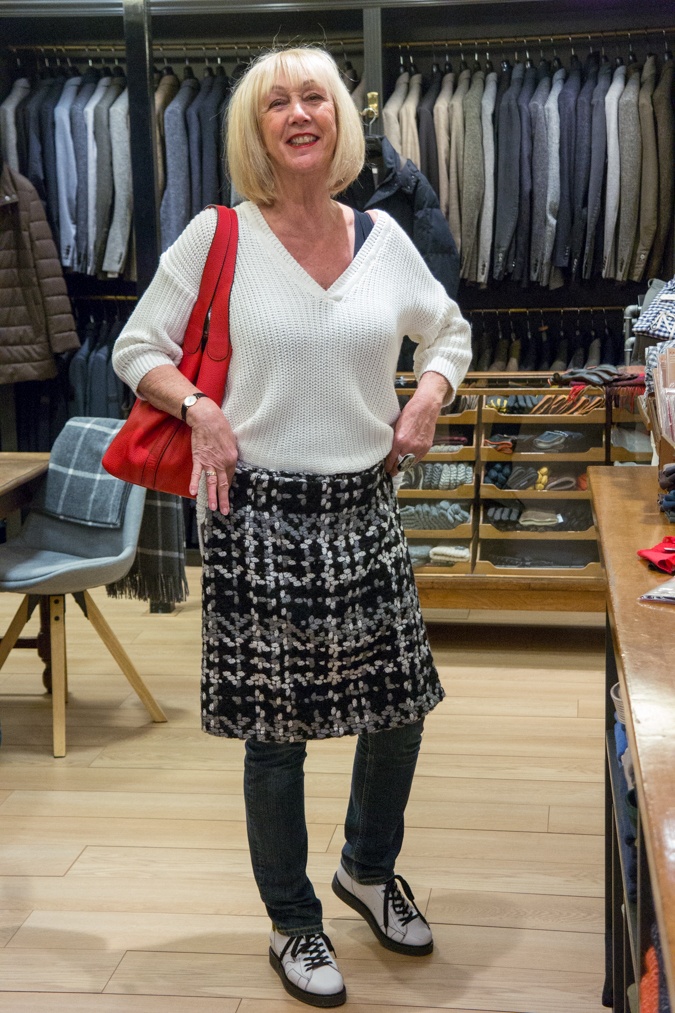 Terribly busy again. My life is never this busy. Friday night we had our neighbours over for dinner. Ron made bouillabaisse (French fish soup) with 33 ingredients. He was slaving away in the kitchen all afternoon. I thought it was really nice, but he was disappointed. The evening was animated. Great people living next door.

Met my BVA friends again. We gathered at Marianne’s house for coffee and chat. Jilske told us about the theft of all 4 wheels of her new company car. And she had chosen such lovely rims. The thieves must have liked them too. Imagine coming out of your house in the morning to go to work and seeing this: 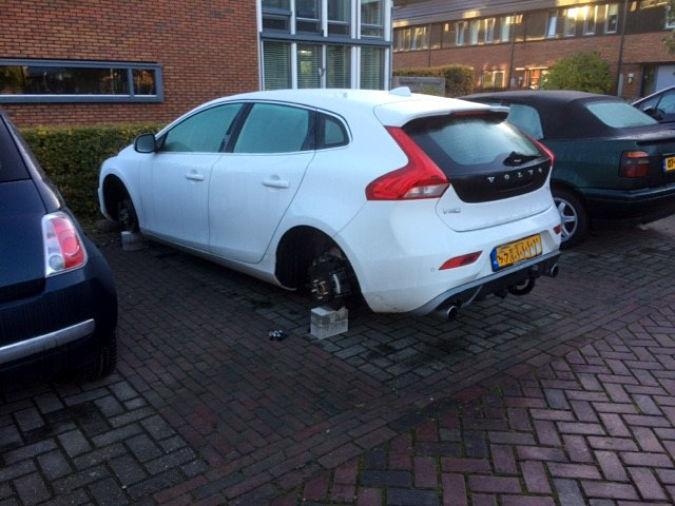 We contined chatting after three of our company went out shopping. Marianne, Marianna and I stayed behind. Marianne had just recovered from a concussion (fell on her head, long story) and we didn’t think it wise to go out shopping. Me, Knee and Credit card were not keen on shopping either. Later in the afternoon we drove to the beautiful 5 star Amstel hotel for a high tea. You will see all the photos in a couple of weeks, but I’d love to show you what the hotel looks like: 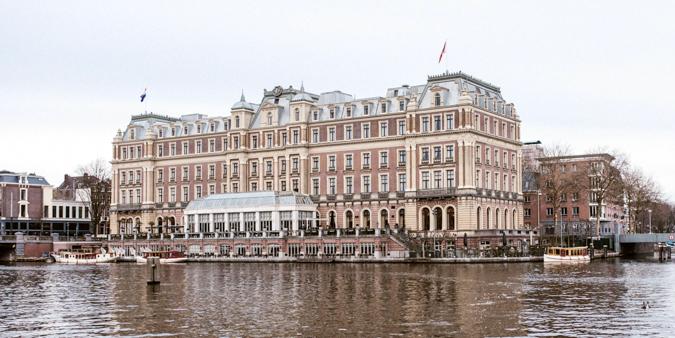 Isn’t it a beauty? The high tea was delicious and we started with champagne. I hope I didn’t make too much of a fool of myself as champagne is always risky on an empty stomach. I get even louder than I normally am.

My brother celebrated his birthday and the whole family had a chance to catch up. What a noise! About a dozen grown-ups and 5 children, all shouting and talking and laughing, you could hardly hear what the other one was saying. The atmosphere was very good.

On my day off I met Marja for lunch at a restaurant with a view. We spent hours chatting away. Thoroughly enjoyable. Hadn’t seen her for quite a while. I took this terrible picture outside: 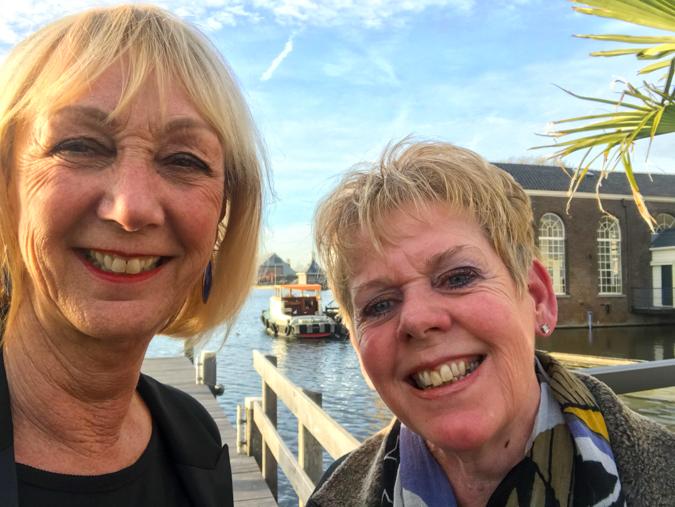 And there was dinner with two girl friends Thursday night. Really… these events would do me for a month instead of a week.