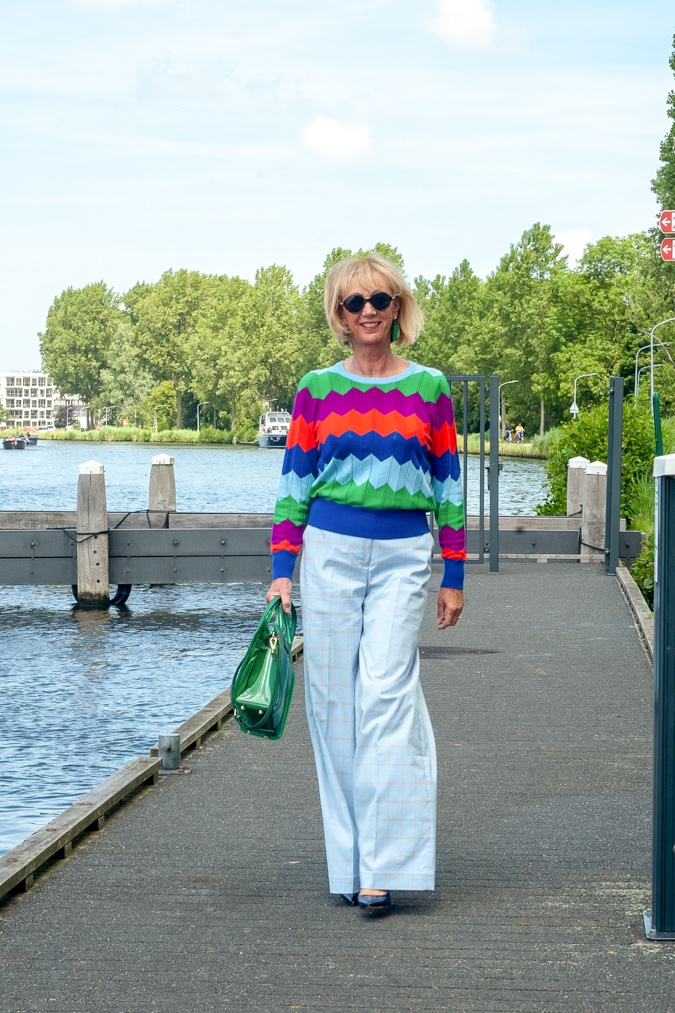 The fact that this pair of wide blue trousers suit me so well was a total surprise to me. I have no hips and a very tiny bum which means that trousers with emphasis on those areas are not my friend. I only put them on because husband Ron liked them so much. And surprise, surprise… they look really good. Just goes to show you never should stop trying. Especially when new models are on the market as they may change the whole silhouette. The jumper is typical for the brand (Essentiel Antwerp). They are masters when it comes to colour and combining different patters. When I paid for the trousers and the jumper, Ron put the bag next to them on the counter and said: “You may choose: a blue one or a green one, my treat”. Mwah, big kiss.

Kitty was my photographer and she had discovered a small ferry going across the river of Haarlem (called Spaarne). We both never knew of its existence. As it was splendid weather, we decided this was a good spot for a shoot. It is such a difficult thing to come up with a location that hasn’t already been on the blog. (As if you remember them all hahaha.)

I am going to give you a minute to minute report as it is so difficult to choose which photo to show and which one not.

Below: The river Spaarne, walking towards the ferry. 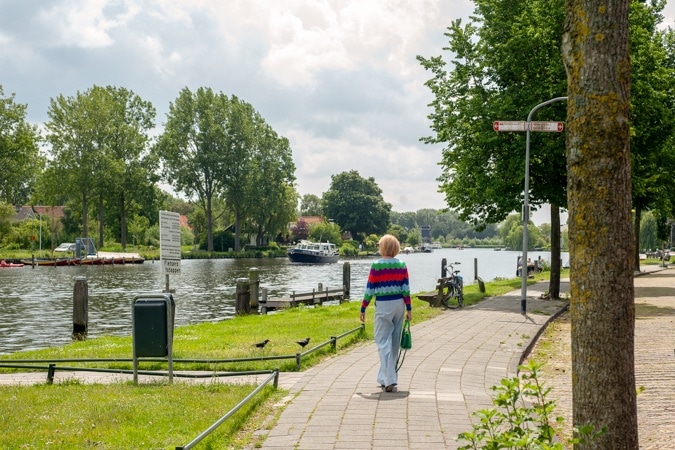 Below: The ferry is only for pedestrians and cyclists. And for free. We Dutch love things that are free of charge. 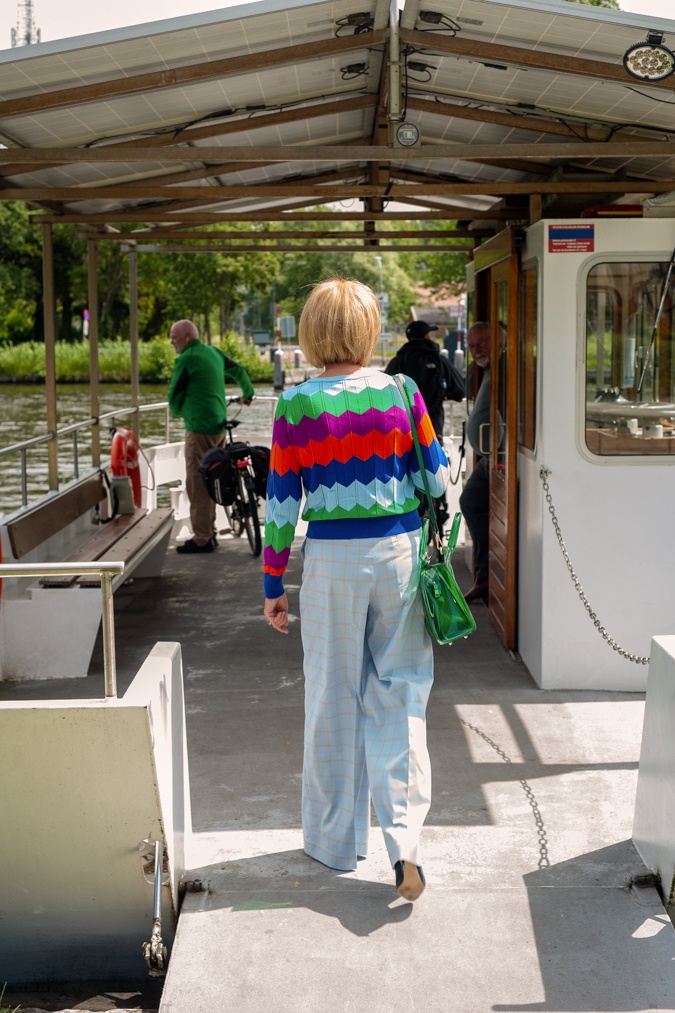 Below: This gentleman was wondering what the hell was going on with that camera. He matches perfectly with my jumper. 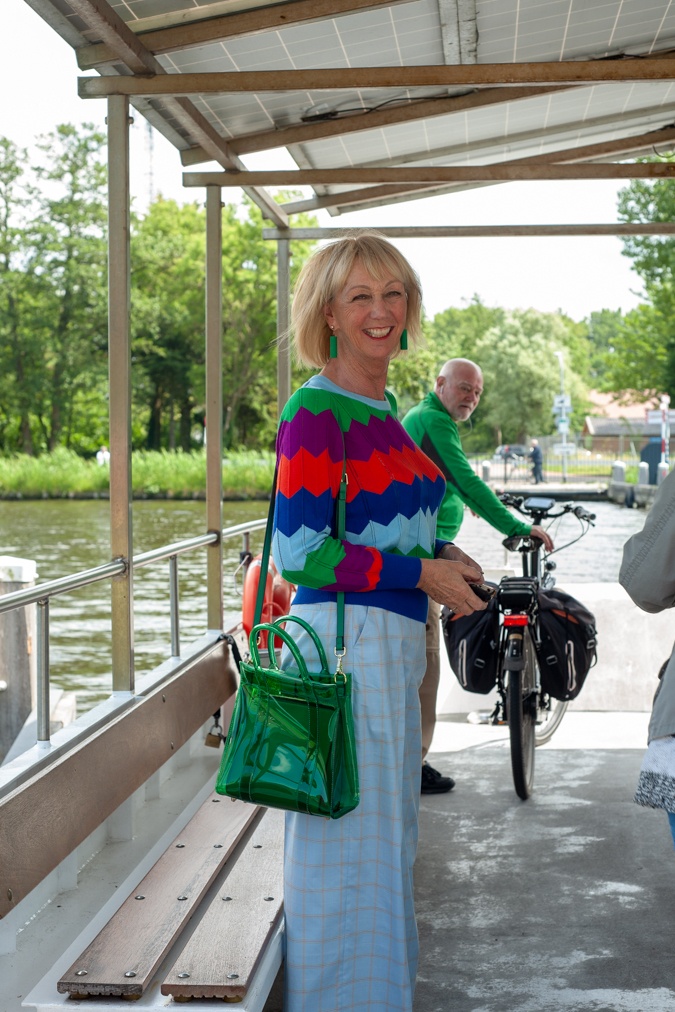 Below: I think crossing the river and back is a mellow job. 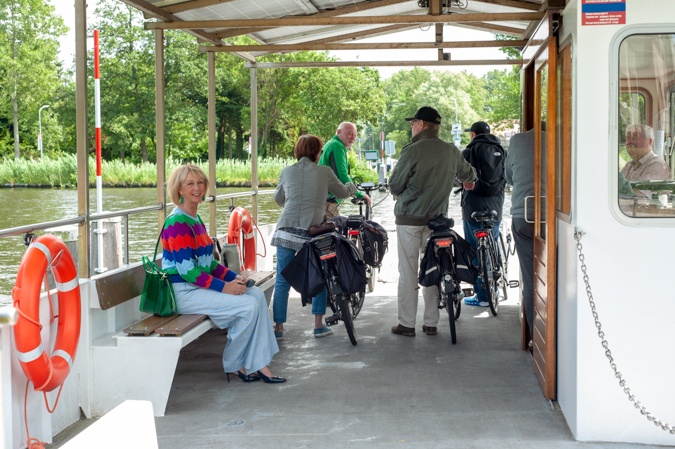 Below: The captain, a cheerful chap. 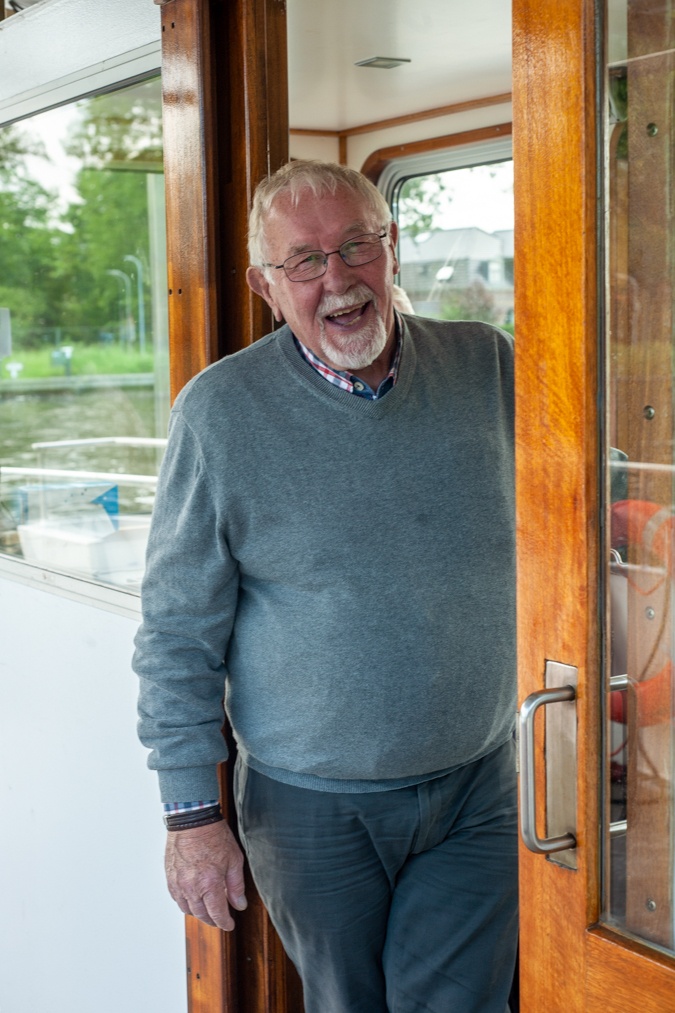 Below: Leaving the shore behind.

Below: It is not the same as boating on the water, but it is still pleasant. The earrings are made of corrugated cardboard by Dorisse on Etsy. Her Etsy shop is called Paper Statement and she makes these earrings (and more) in different shapes and all colours. Haven’t worn these green ones called Tubi, until this day and they are perfect with the sweater. They are very inexpensive ($ 16.28) and Dorisse also sells DIY tutorials for $10.65. 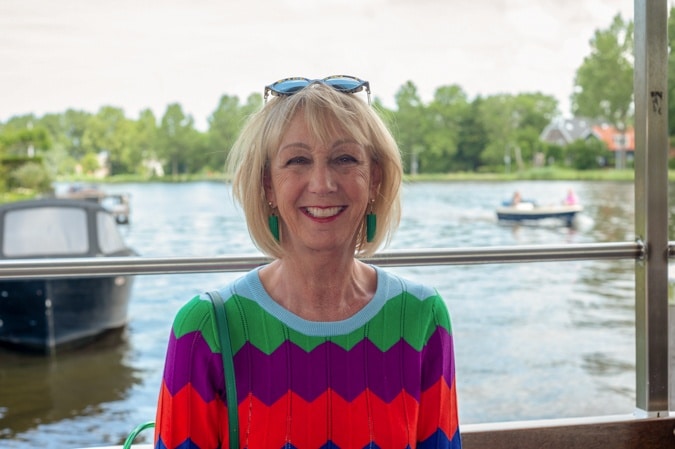 Below: On the other side of the river it was unexpectedly green and very busy. Cyclists, strollers, hikers, cars, you had to watch out.

Below: Kitty managed to take a photo of me with this majestic tree without anybody else in the picture. It looks very rural but it wasn’t. 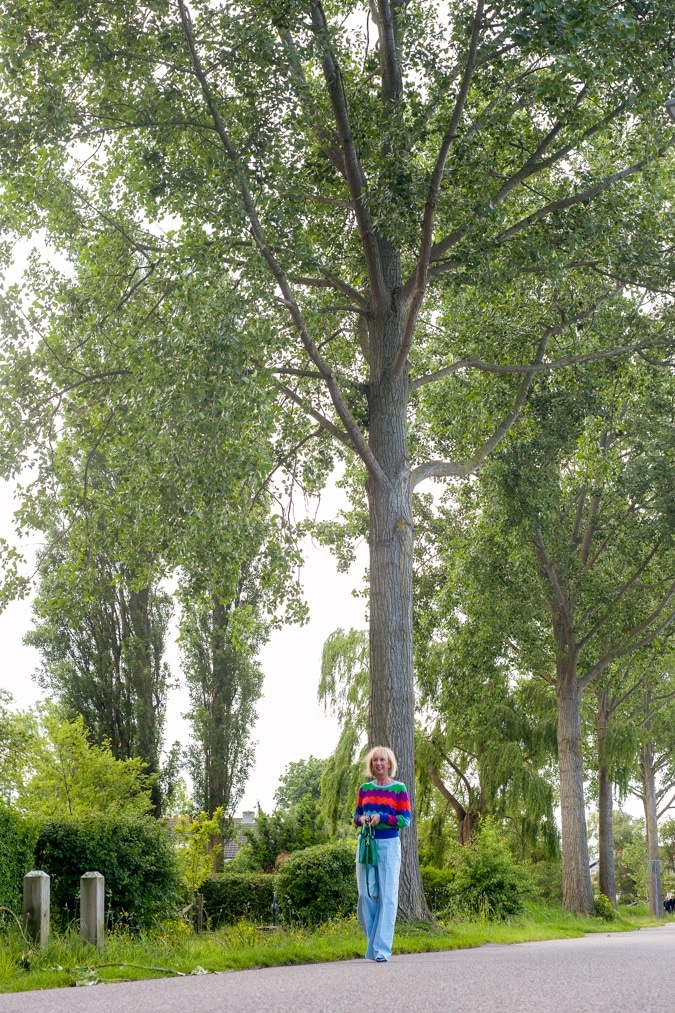 Below: A “Ron preference” photo: taken through the leaves. Fortunately Kitty focussed on me instead of the leaves haha. 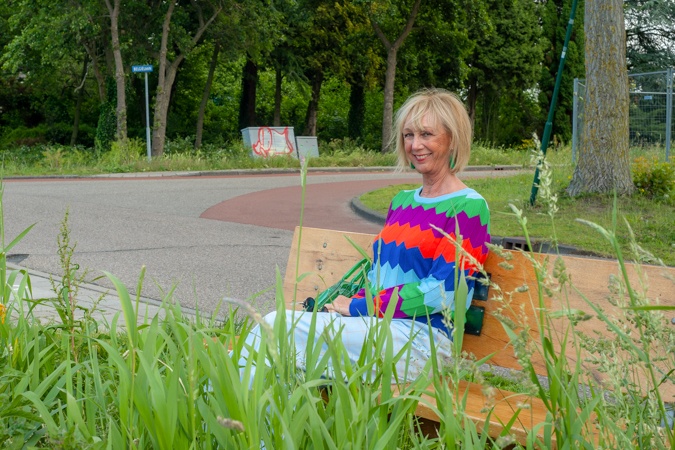 Below: Nice view of the river and of my patent leather slingbacks. Bought in Turin a couple of years ago. Very comfortable. Brand: Sancrispino Torino. The shop was closing down back then. Such a shame. 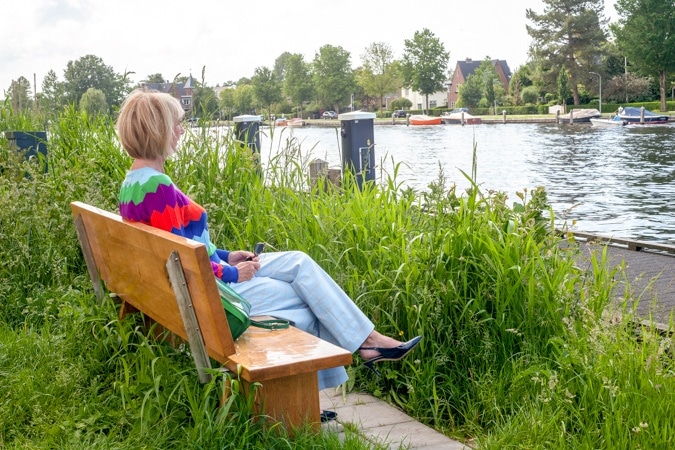 Below: The photos were taken, so back to the other side again.

Below: It is rather a posh area on the other side. Big houses like this are only for the rich in this small country.

Below: A quick “fluffing-up” of the hair in the car as Kitty wanted to take one more shot. 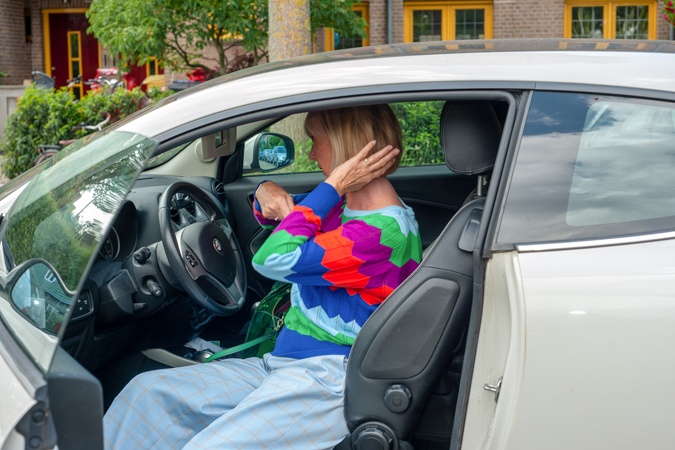 Below: We decided on a picture with the pretty house/roses in the background. However, behind the hedge was a man mowing his lawn. See him on the left? Kitty said she would avoid him from being in the photo by shooting from a low point of view but that is never my favourite. So I turned round and asked the man very nicely whether he would mind ducking behind the hedge hahaha. He saw the humour in the request and complied. 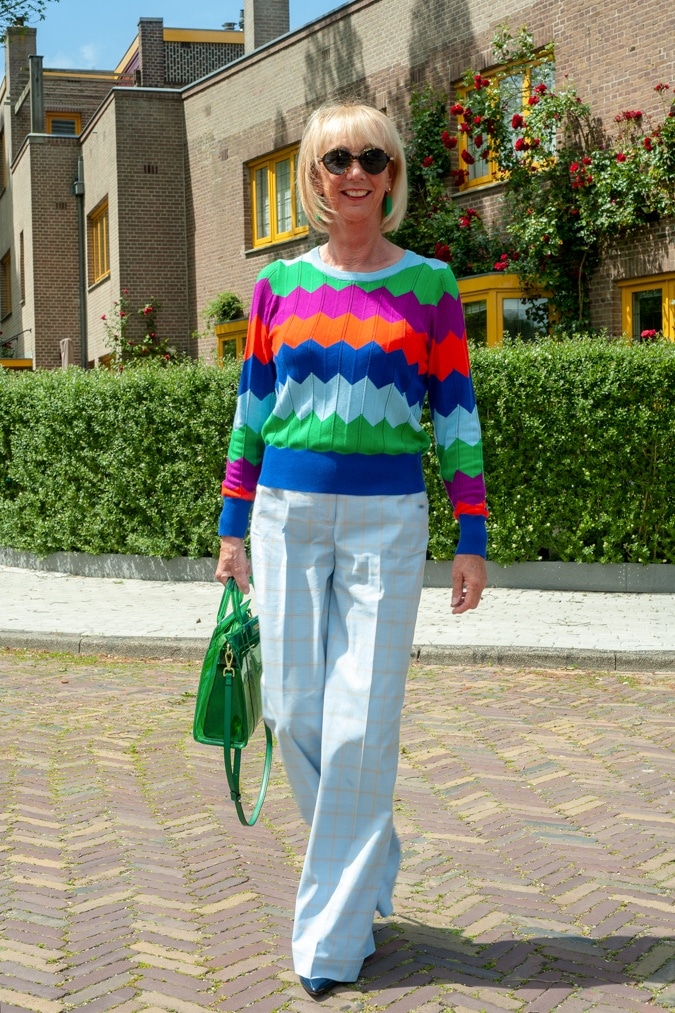 Below: There are many of such pretty houses in these streets. Unusual with the combination of burgundy and yellow.

Below: One last view of the shore. 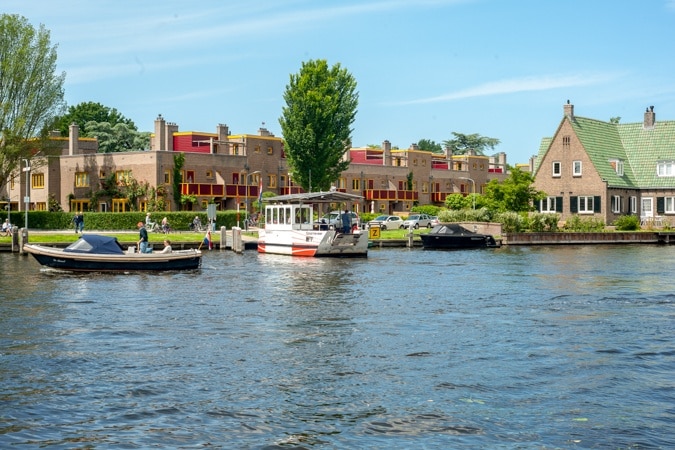 Below: Kitty and I ended our photo shoot with a drink and some sweets in a restaurant where I took this picture of her. Va va voom. 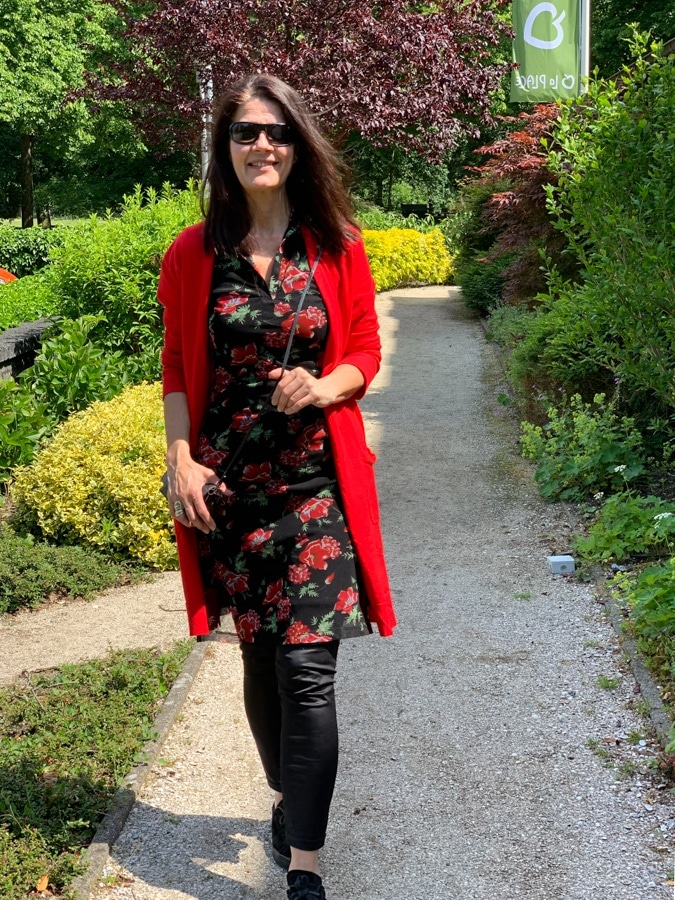 Quite a lot happened.

Saturday we attended a “club day” for dogs of Watson’s breed (Korthals Griffon). He was judged along with a lot of other puppies (I think 12 in total) and got “Very Promising”. All puppies were Very Promising so it must be a very good puppy year. Our first dog Charlie didn’t get that. Nevertheless, in spite of the “very promising” diagnosis, Watson wasn’t awarded one of the three prizes, which pissed Ron off enormously haha. In the morning it was raining cats and dogs (pun intended) so we nearly didn’t go. As this is the Netherlands the weather changed completely two hours later. We arrived at the event just in time.

Third from the left is Ron with Watson and second from the right (with the big young man) is Watson’s brother Guus. We also met his sister Freya and his father Glen (Gino). All puppies were given Very Promising. 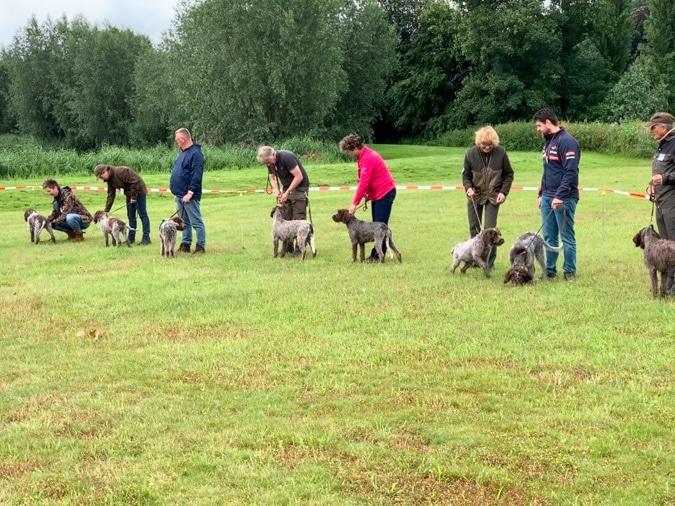 In the afternoon I had an appointment with the hairdresser for my six-weeks cut and dye.

Sunday, a day of leisure. Well… did housekeeping and ironing and such. Sylvia popped by for a quick tea. In the evening I wanted to go out for a steak so I asked neighbours and friends Froukje and Petro whether they would like to join. They did. Only we couldn’t get a dog sitter for Watson at such short notice. Our friends solved it by going to the supermarket, getting food and bringing their barbecue as well (ours is at Ron’s allotment). Great evening.

Monday: the start of my three weeks HOLIDAY…YAY. Loes and I went to Amsterdam to do a photoshoot and have lunch on a terrace. I think my holiday money will be spent on parking fees (which are very high in Amsterdam) and lunches. Money well spent. In the afternoon Sylvia and I had a drink on a terrace in Haarlem. This is the way I am going to spend my entire holiday.

Together with 4 of the BVA girlfriends we had planned to go to Spain for a week but that fell through. Due to heavy rainfall the cellars of the apartment complex were flooded and the lifts (elevators) were out of order. As we have Marianne in a wheelchair, we cannot go. To compensate (well.. sort of) we have planned to spend 2 days with each other next week in the east of the country. I will also visit Lisa, The Sequinist in London the beginning of July. Together we will meet Susan of Une femme d’une certain age for lunch. She is L.A.-based but in London for her holiday. I won’t be bored.

Tuesday: beautiful weather, perfect for a visit to the beach with Ron and Watson. Here I am exposing my wrinkled arms. I am always rather poorly dressed when I go to the beach as you must wash your clothes immediately when you get back. As I am in bikini, my arms will be exposed anyway. Let it go, let it go. Watson dug a huge hole underneath my beach bed. 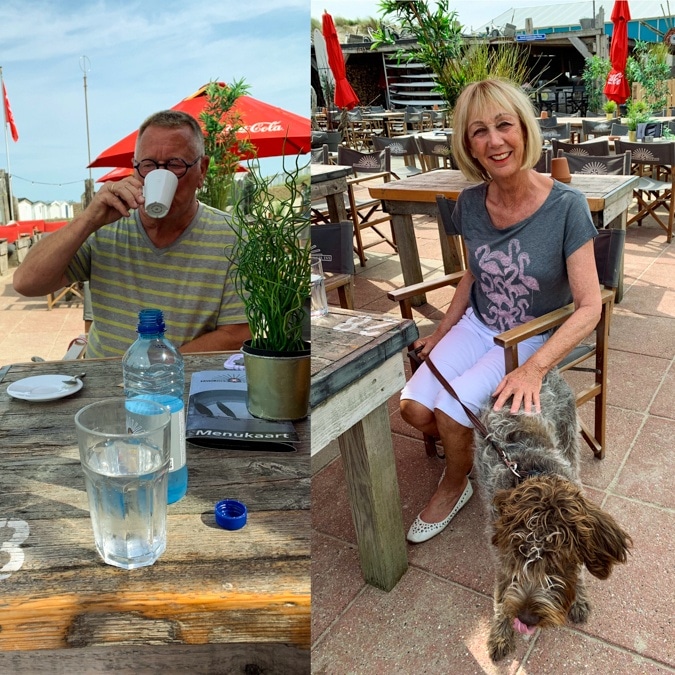 Tuesday evening was a night to dress up. Two of my colleagues were leaving the company and we had a fare-well dinner. This picture below was taken by one of them as she caught up with me walking to the restaurant. (Don’t worry, the parking garage was very close by.) More photos of this dress in this post. 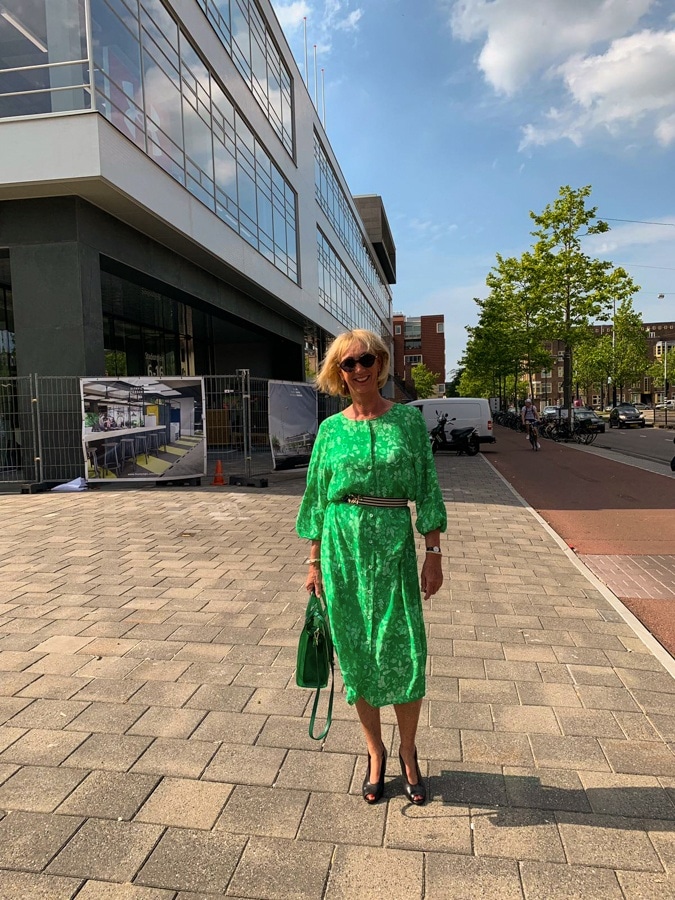 Below: It was an elaborate dinner and we thoroughly enjoyed ourselves. 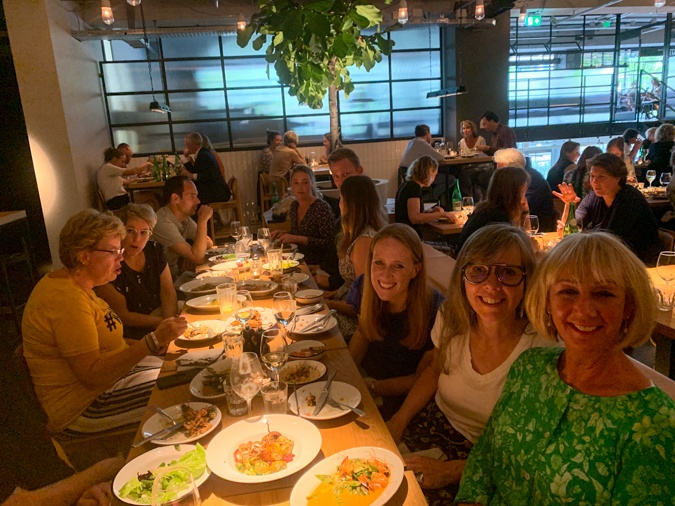 Wednesday: meeting my friend Selma at the beach in Noordwijk. As it was raining really hard that morning I suggested we would meet somewhere else, but she checked the weather app and indeed, by the time I arrived at the beach the rain had stopped and after a while we could sit outside as well. Had a lovely day with her.

Thursday: took BVA friend Marianne for a day at the beach. Same spot where I had been the day before, because I was permitted to park my car right at the beach and wheel Marianne inside. Had to park somewhere else after that, but this was a huge advantage. Marianne so enjoys a day at the beach but being in a wheelchair doesn’t allow her to go anymore. The sun came out as we arrived at the beach. 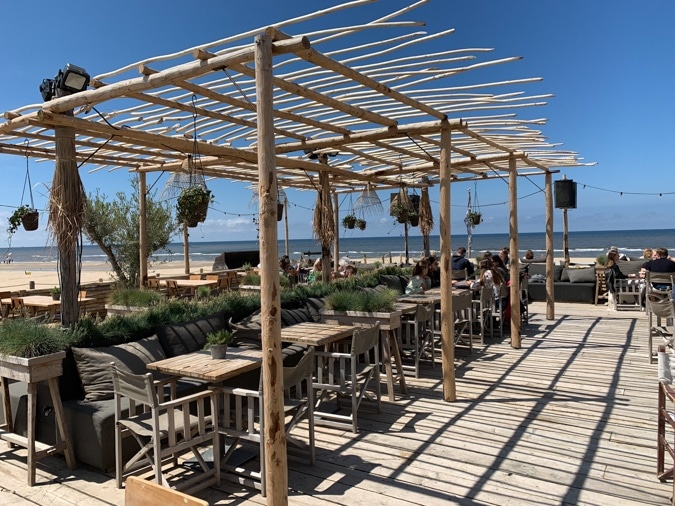 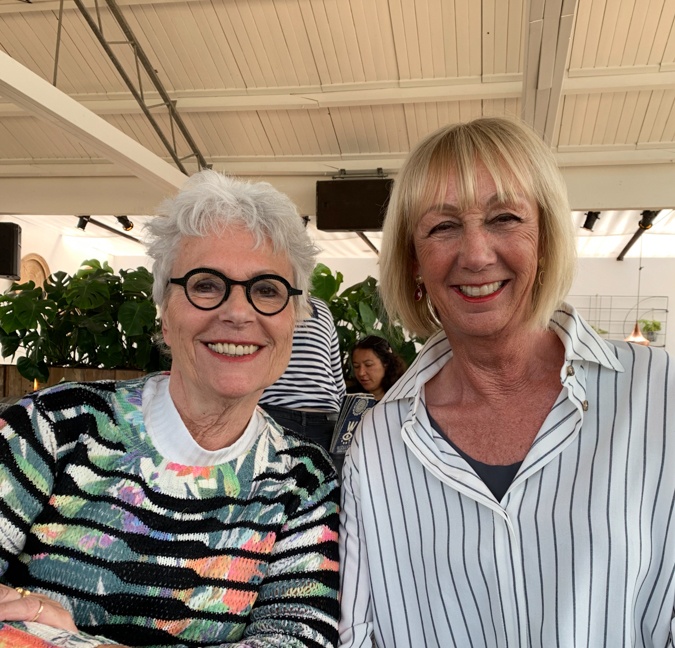