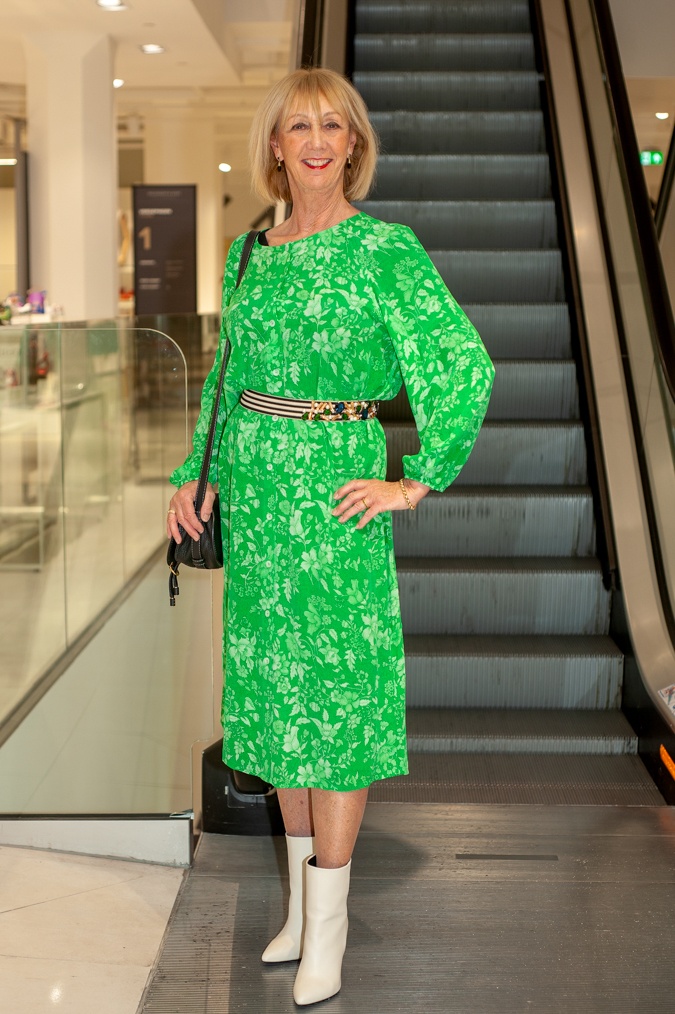 As you probably remember, I had strayed from the non-spending path when shopping with Peggy in the 9 Streets of Amsterdam. Today’s outfit is the biggest spend: a green maxi summer dress with the cream/white ankle boots which I adored so much (see them in this post with jeans). I have tried those boots on 5 occasions and every time reason prevailed over emotion. However the sixth time I could only think: “What the feck… that knee is getting better, one day I can walk on these”. The green maxi dress would never have been my choice but the stylist girl at Essentiel Amsterdam was very helpful and she added this jewelled belt which made the dress so much better.

And yes the belt is supposed to be worn like this, with the glass beads at the side. Further down you will see a photo of the back with the clasp right in the middle.

In some photos you can see my warm top peeping from under my dress at the shoulder. Combined with an elastic pencil skirt from Bellamy Gallery, I was warm enough for March. For indoors. Kitty took my photos in the warmth of the department store Hudson’s Bay in Haarlem. They graciously let us take our photos, even though I am not wearing something they sell. I can understand that this is a bit of a bummer for them. But as you know, I am a big fan of Hudson’s Bay. They are exactly the department store we were lacking in the Netherlands and I have bought quite a few things at their stores (long jumper, ankle boots, bag, top, sandals, probably even more more, the memory of which I have blocked haha).

Below: We started at the escalators. Trying to avoid customers getting into the picture. 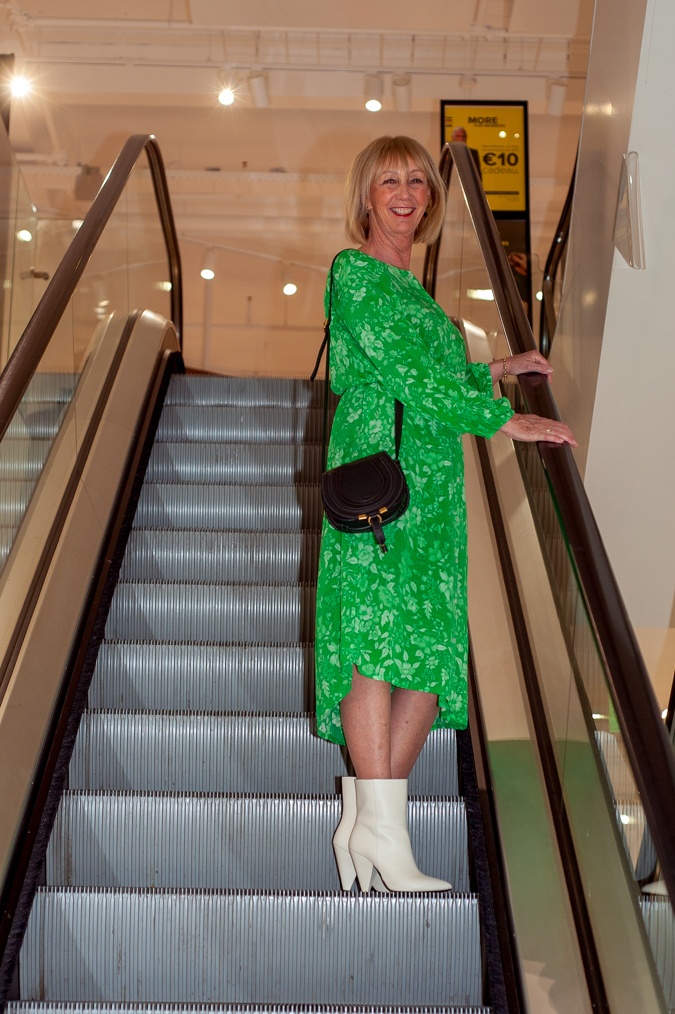 Below: Kitty and I searched the department store for nice backgrounds. Yay: tulips! How very spring-like. OK I look a bit funny, please concentrate on the flowers please. 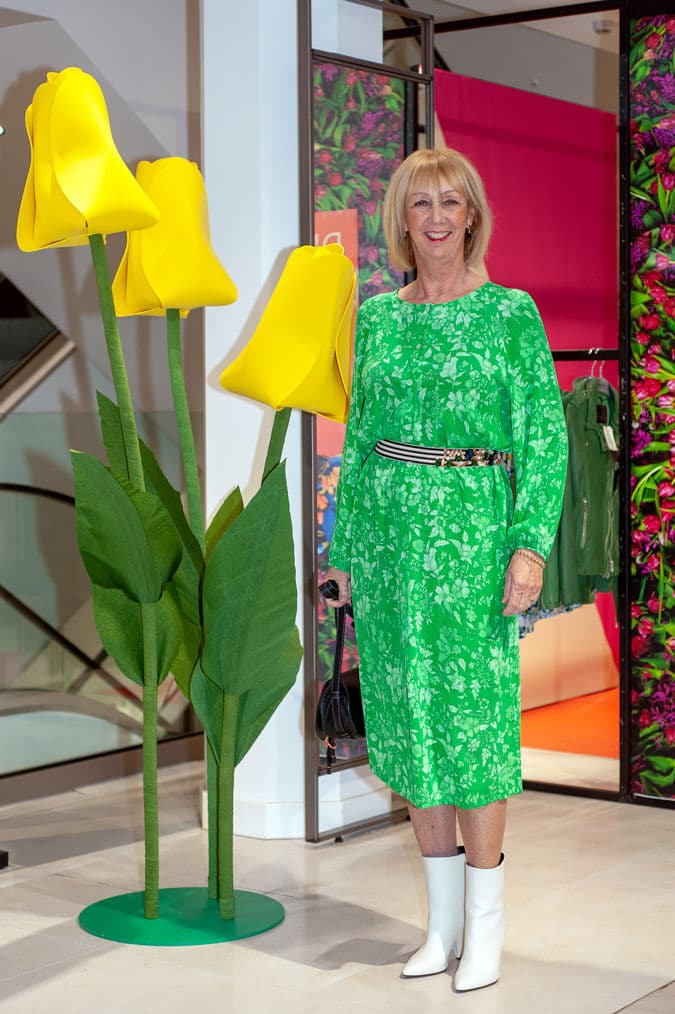 Below: We got into the theme “mannequin”. This is me being a mannequin. (What’s with the raised eyebrows?) You know, when I saw this photo I grinned because my belt isn’t straight. That has a reason. When I was 50 I had my waist liposuctioned. And after that the left side of my waist is slightly lower than the right side. I might be wrong and it could also be because I have put my left foot forward. 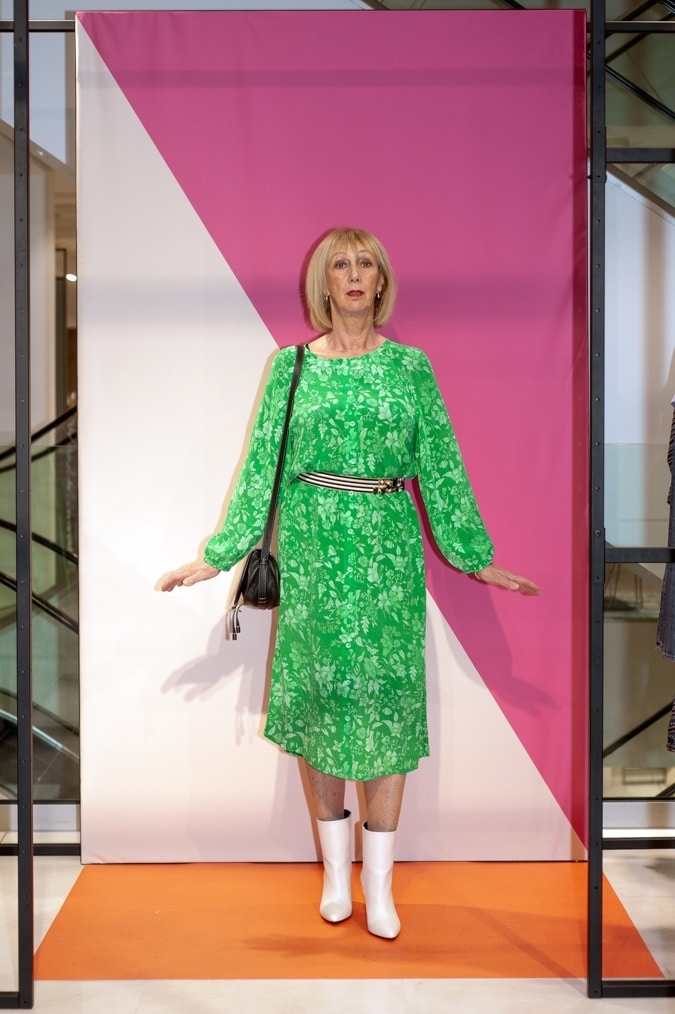 Below: Close-up of my belt. 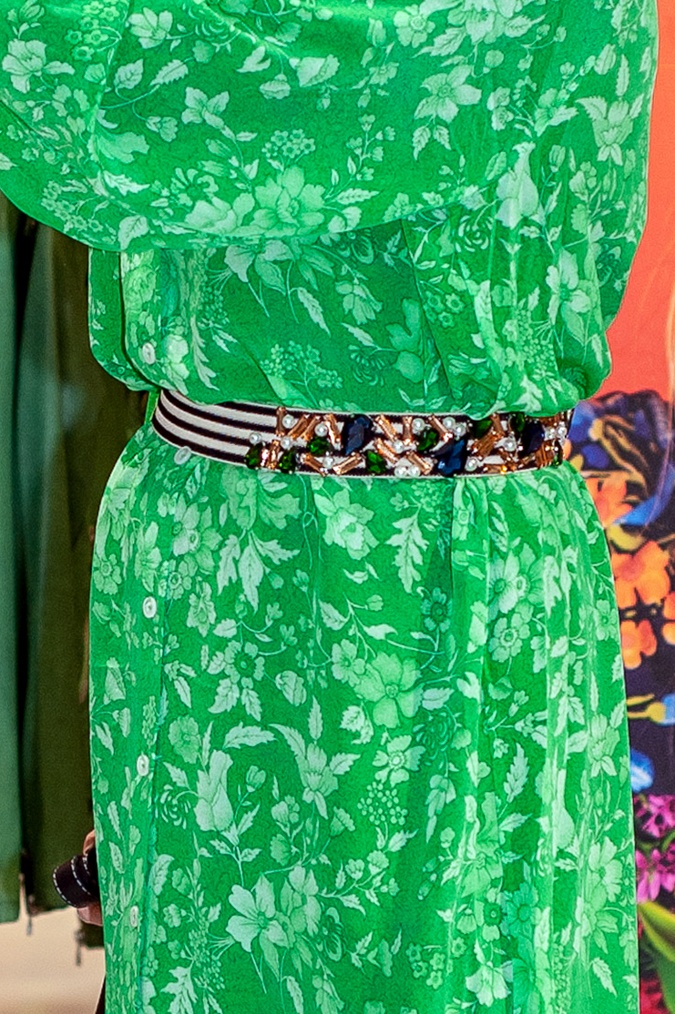 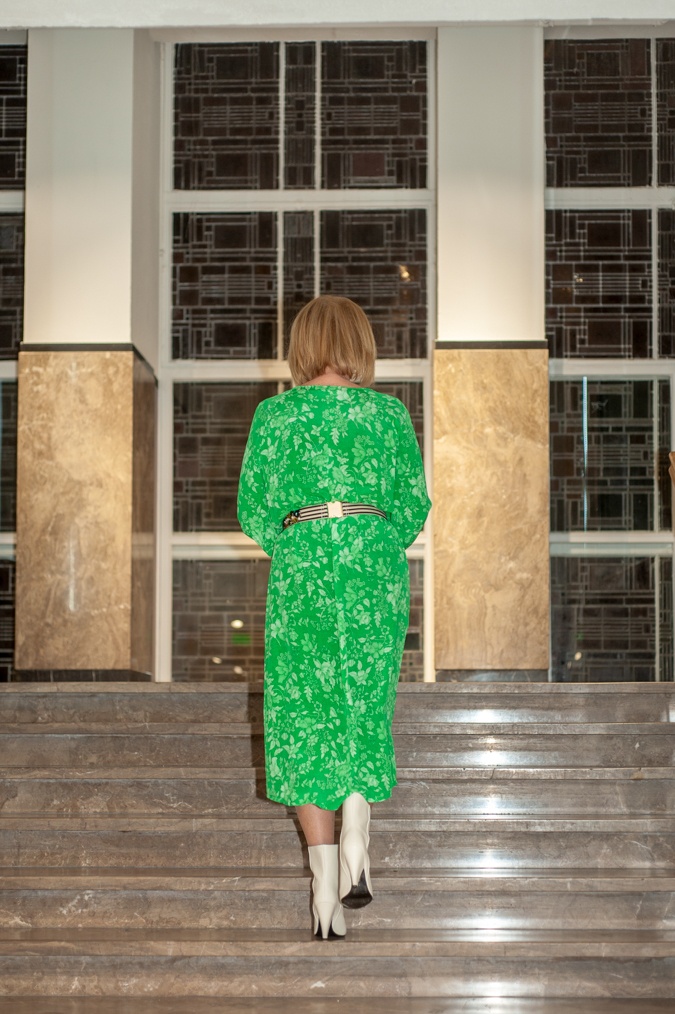 Below: There are some magnificent stairs and windows with stained glass at Hudson’s Bay Haarlem. Of course the stained glass isn’t showing its beauty when it is dark. 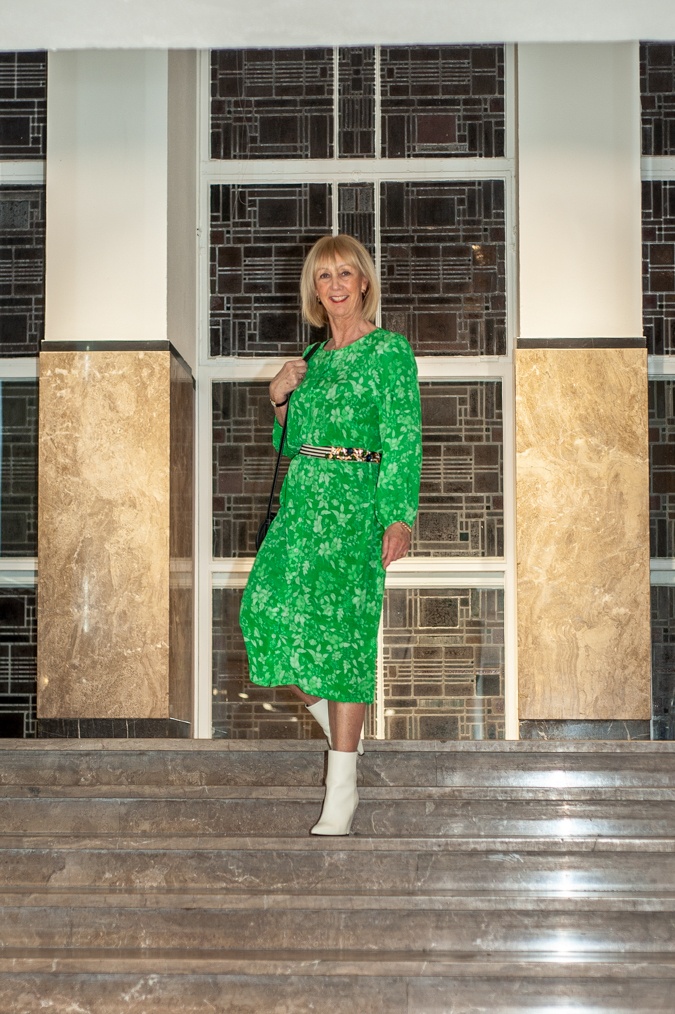 Below: The BOOTS. Aren’t they beautiful? I sure think so. Are they comfortable? Hell no, especially not going down those stairs and with my knee. Knee is still further improving by the way but we are not there yet. 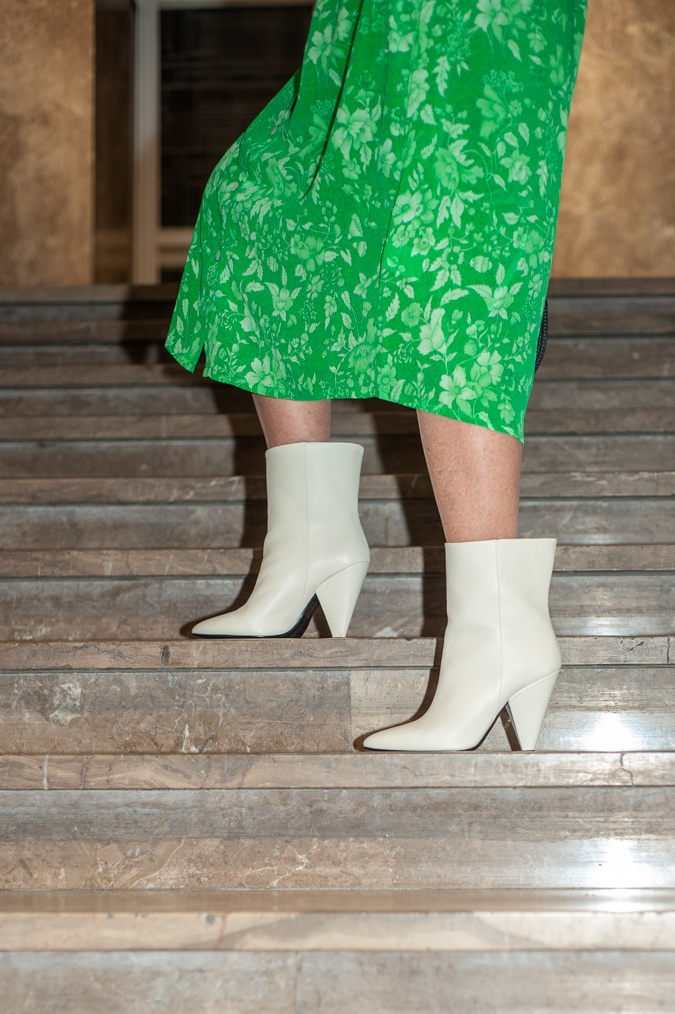 Below: We came to the children’s department. When I tried to pull this “dog” from under the table, it fell apart. Oh dear. 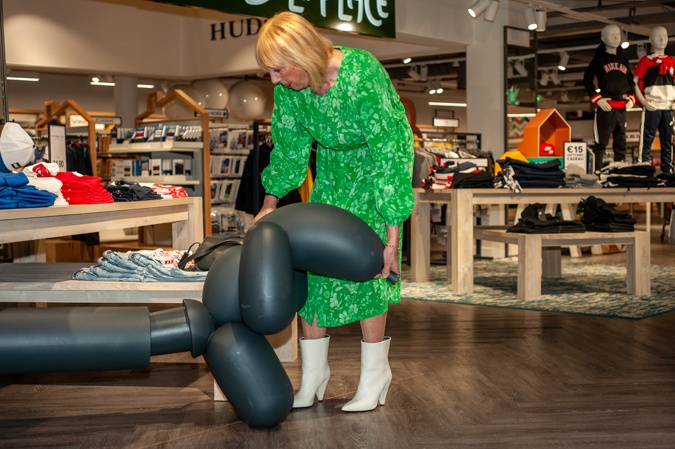 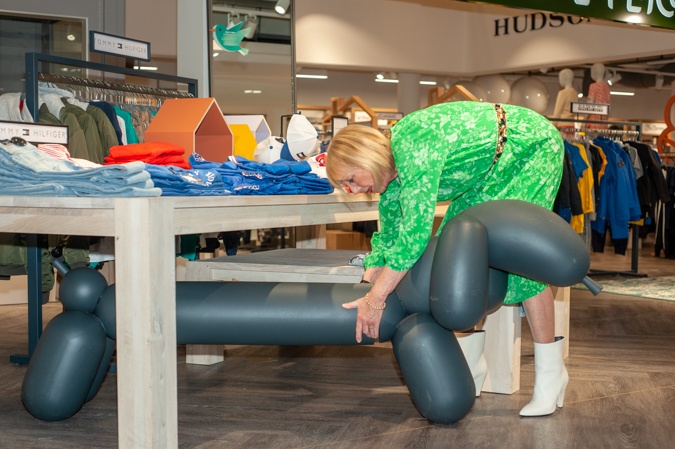 Below: Up to the top floor where the escalators don’t go. The lift (elevator) took me and Knee safely to the restaurant. 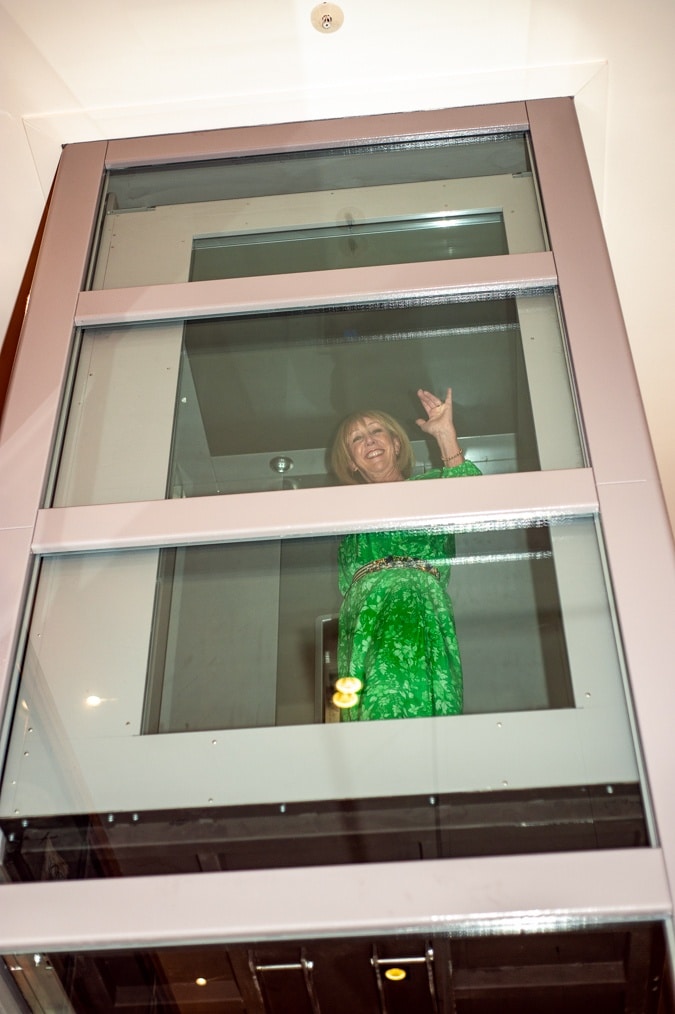 Below: This was sooo tempting, especially the fudge (picture is a bit yellow). But we were strong and resisted. 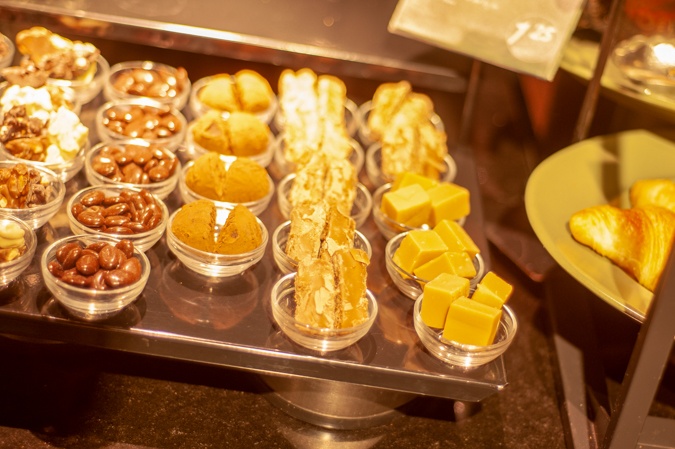 Below: As it was already quite late, there weren’t many people in the restaurant. 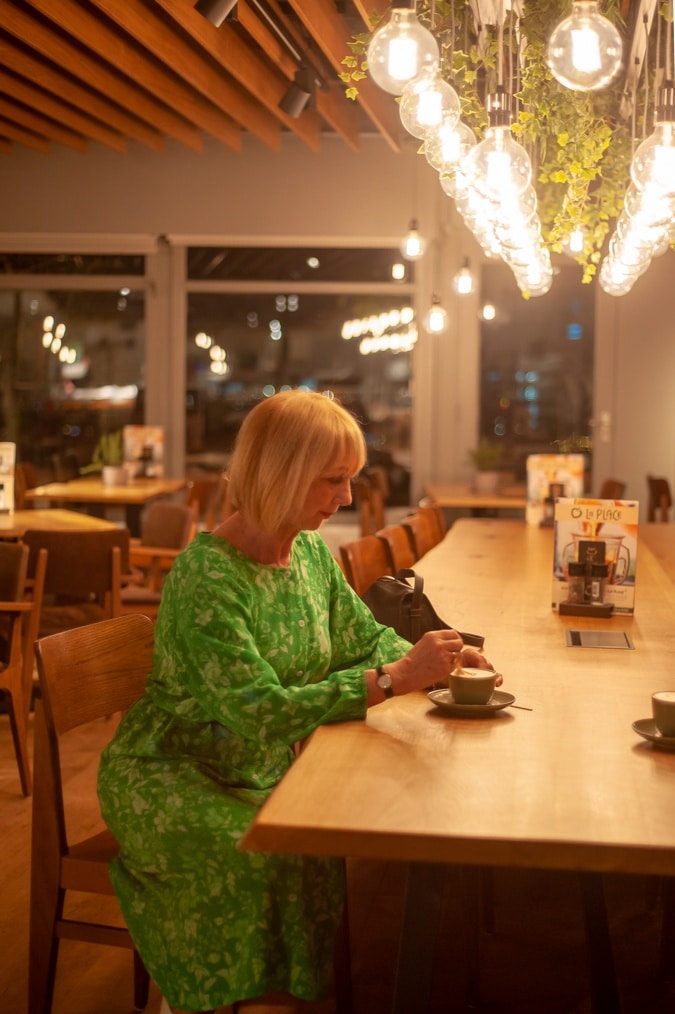 Below: So I took photos of Kitty. She had put her hair in a bun for a change, wearing a jacket over a dress. 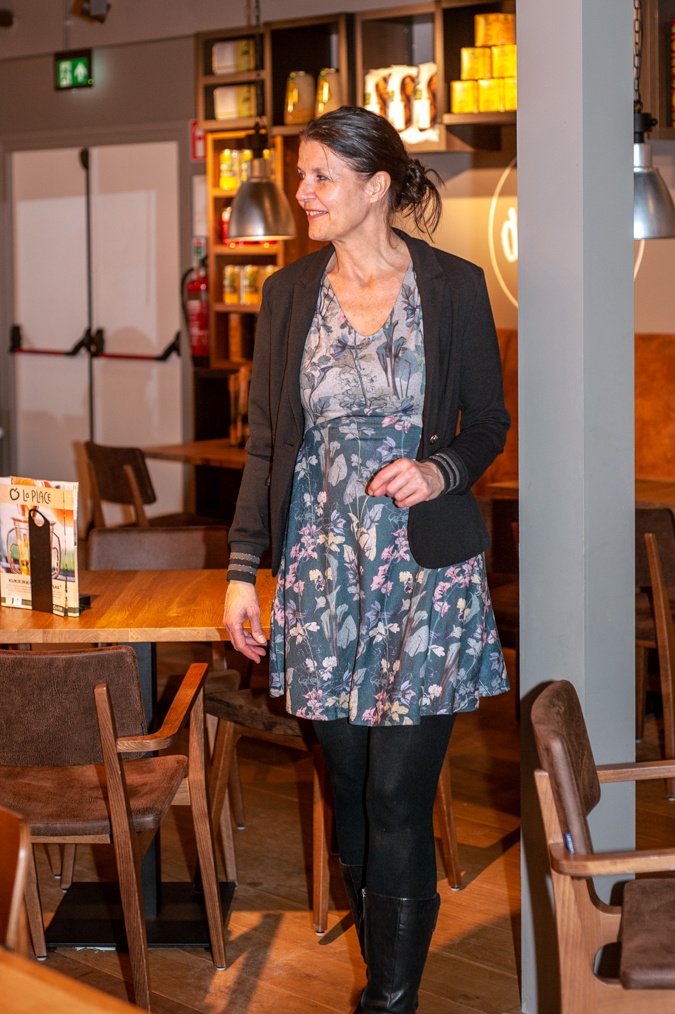 Below: The dress without the jacket. Kitty is putting on lipstick if you are wondering why she is pulling such a face. 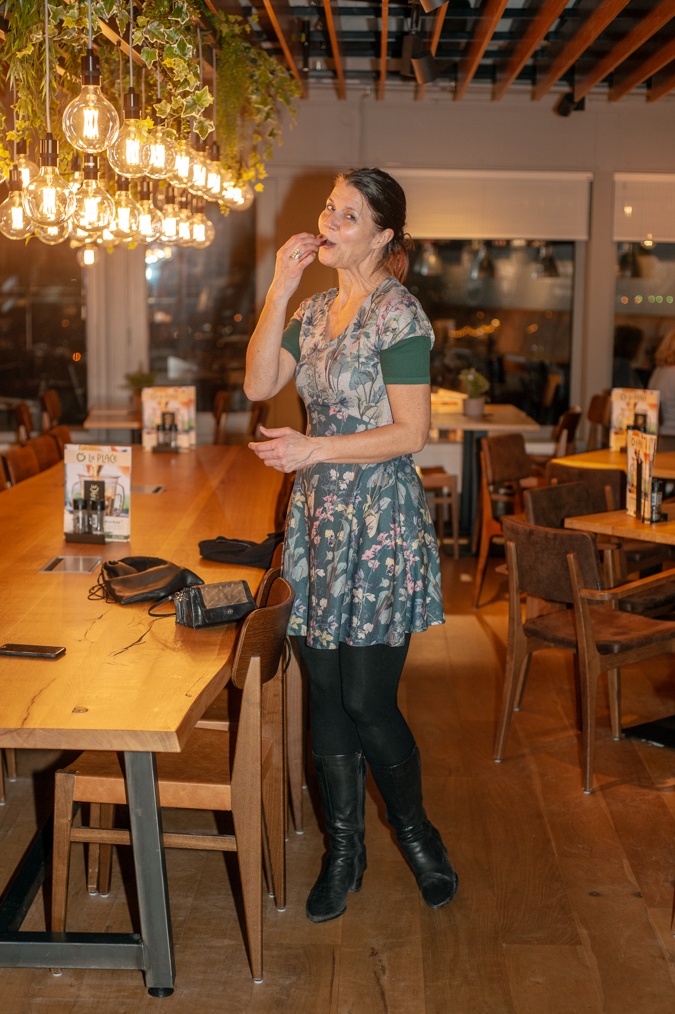 Below: We continued the “theme” mannequins. Silly face. 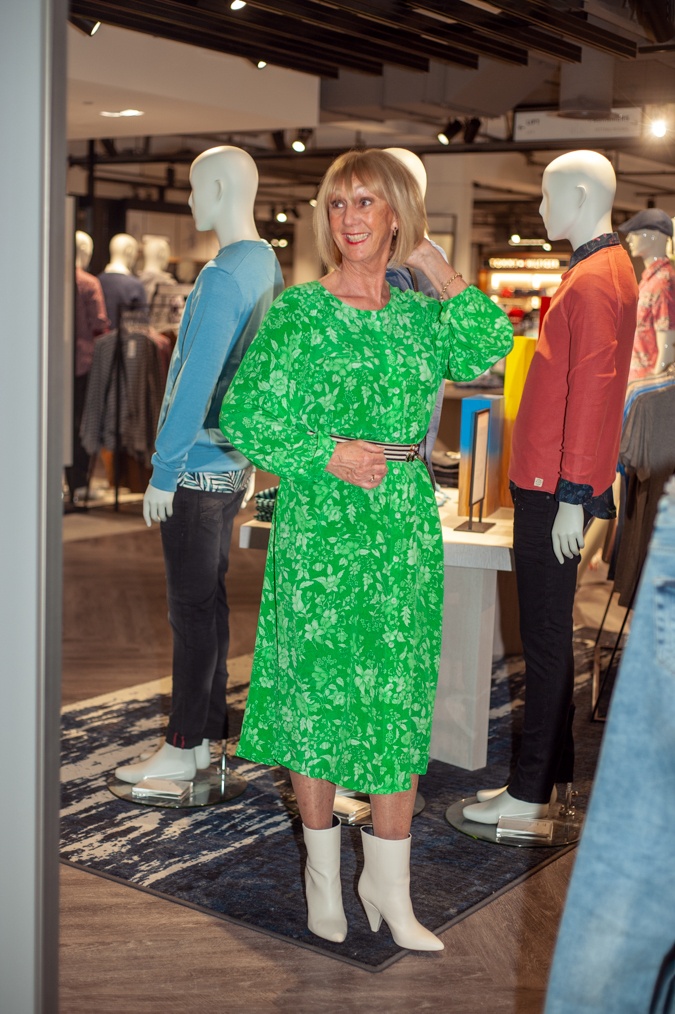 Below: We are an item… 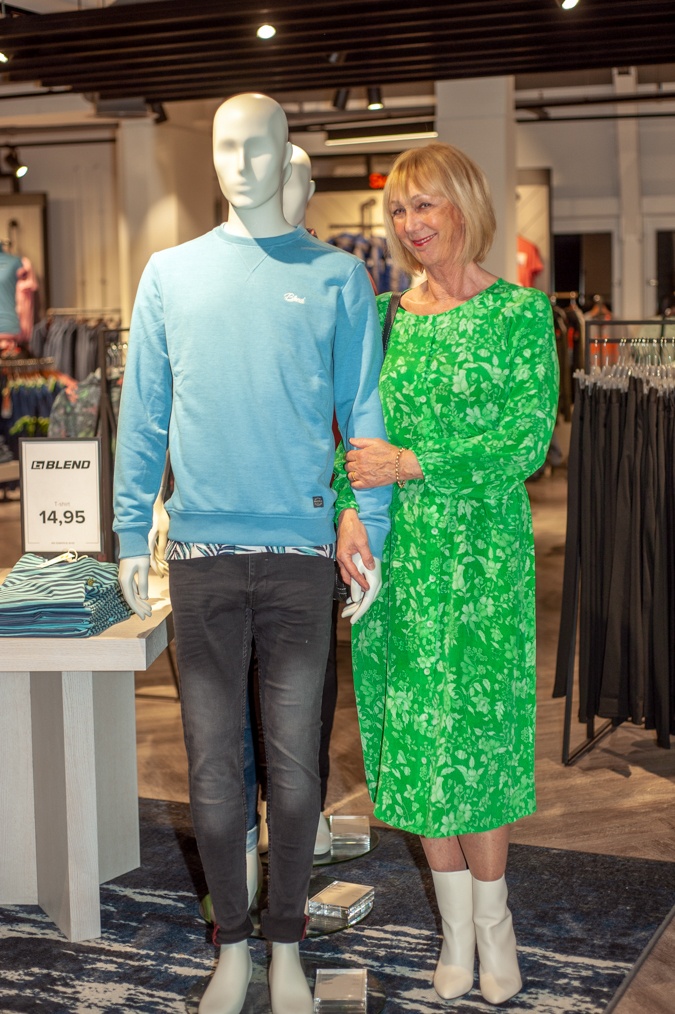 Below: He is the silent type 😆 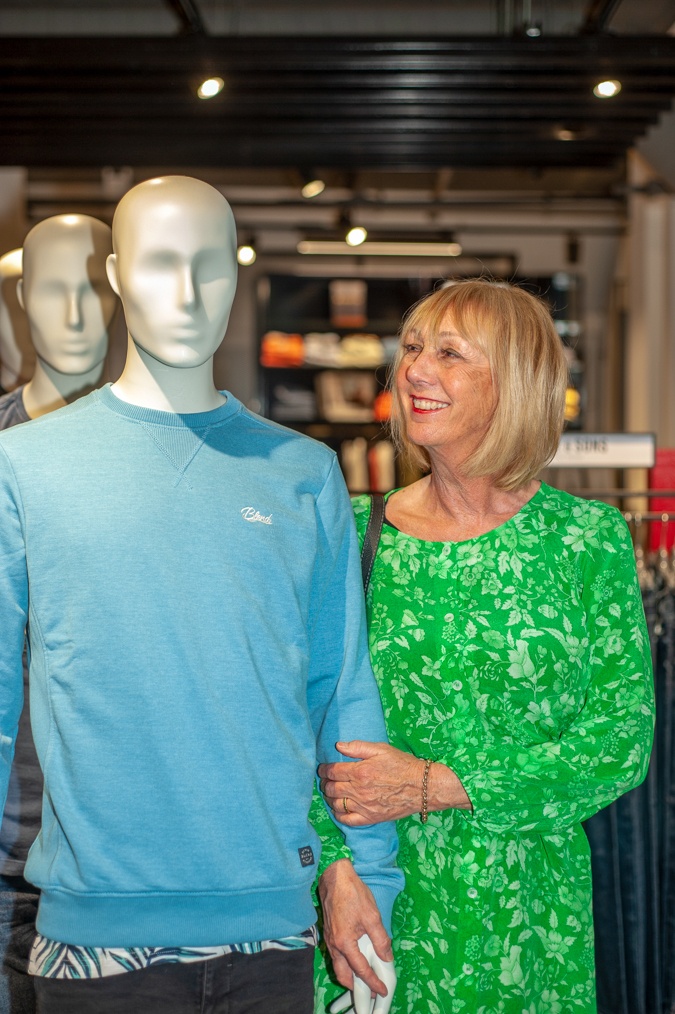 Below: This is always fun. Trying to look like the mannequins. I think I managed that pretty well. 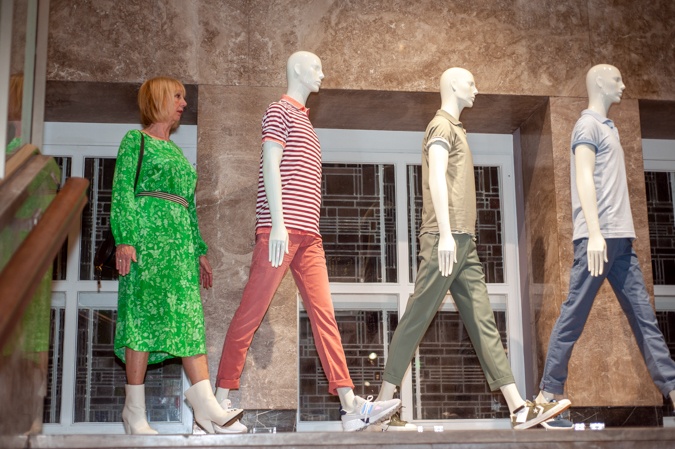 Below: There was a sort of a daybed type of thing which begged me to lie on it. The saleslady came over to find out what we were doing and whether we weren’t photographing other customers. (No, we weren’t.) 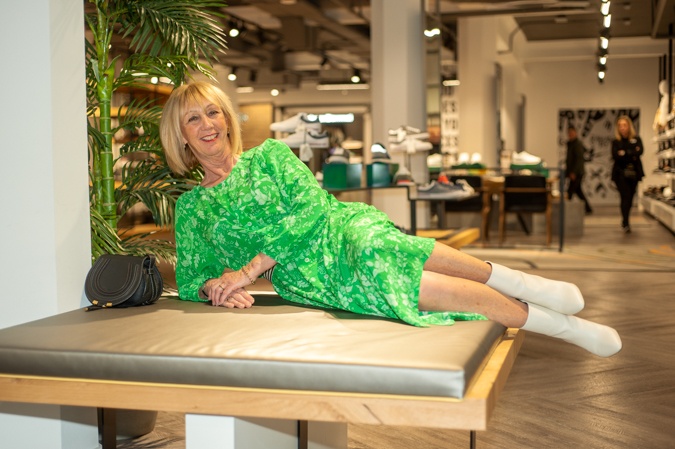 I was very pleased with the result of this photo shoot. A big thank you to Hudson’s Bay Haarlem for allowing us to use their department store as location. And of course to Kitty for photographing in the evening even though she was quite knackered from working a lot.

Not an awfull lot actually. Went to the hairdresser with hair that looked like a bad wig (due to fog and being rather long). The hairdresser saw her window of opportunity and chopped it rather short. She claims it looks better that way and she is probably right, only I don’t like it this short. You will see it next week.

Worked, worked, worked. Puppy sitting, puppy peeing, puppy poos, puppy playing (to keep him distracted and preventing from chewing the furniture). Generally exhausting. Did I mention work and overtime? Gosh I do earn my salary this week.

Did sneak out for a couple of hours on a Wednesday to visit my sister-in-law on her birthday. Hadn’t been for ages. Afterwards we took Watson for walkies at a nice location where he could run free. Nifty as I am (ahum), I had the camera with me and Ron took some quick photos for next week’s blogpost.

Dog, dog. I am trying to relieve Ron when I can as he has to watch Watson constantly. At the moment we are in the process of getting him to sleep downstairs instead of in our bedroom (in a bench). Which means one of us has to sleep on an airbed next to him hahaha. Ron took the first shift on Friday and was miserable all night. My turn Friday night.

← Having coffee in a yellow jumper with Nicoline Dropped crotch trousers →

← Having coffee in a yellow jumper with Nicoline Dropped crotch trousers →