Having coffee in a yellow jumper with Nicoline 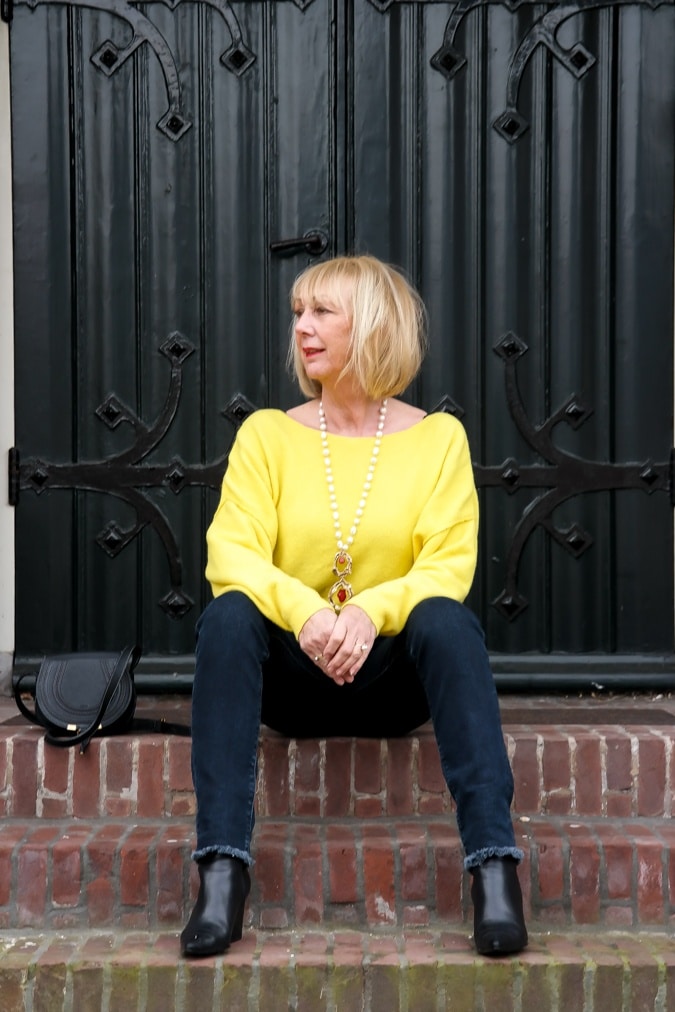 What a couple of weeks it has been… so many emotions. Well, we will come to that at the end of this post. First my yellow jumper by American Vintage. Bought when I was shopping with my friend Peggy in the 9 Streets of Amsterdam. I already have an orange jumper and a long green jumper of this brand and I love them. They are partly wool but they don’t itch, which is something you usually only find with expensive cashmere. When I spotted this yellow one, I decided you cannot have too much of a good thing. And it isn’t spring yet although the colour is very spring-like.

I had arranged to meet Nicoline, a friend of mine since I moved to Amsterdam in 1981 (you do the maths). I was a witness at her wedding but when we grew older we didn’t see much of each other. A shame really. As you know, I am very fond of friends and friendships. As we hadn’t seen each other for about 2 years, this date was long overdue. Trying to decide where to meet, I asked her whether she would mind taking blog photos of me. “Don’t mind at all” she replied and “Let’s go to the old part of Amstelveen for nice backgrounds”. Amstelveen is a suburb of Amsterdam and mainly newly built with some old parts: two streets, a square, a church and a station. The two latter being used for other purposes than their original one.

Below: This is Nicoline. Blue is her favourite colour and she had just acquired a pretty little bag which I admired. My kind of bag. 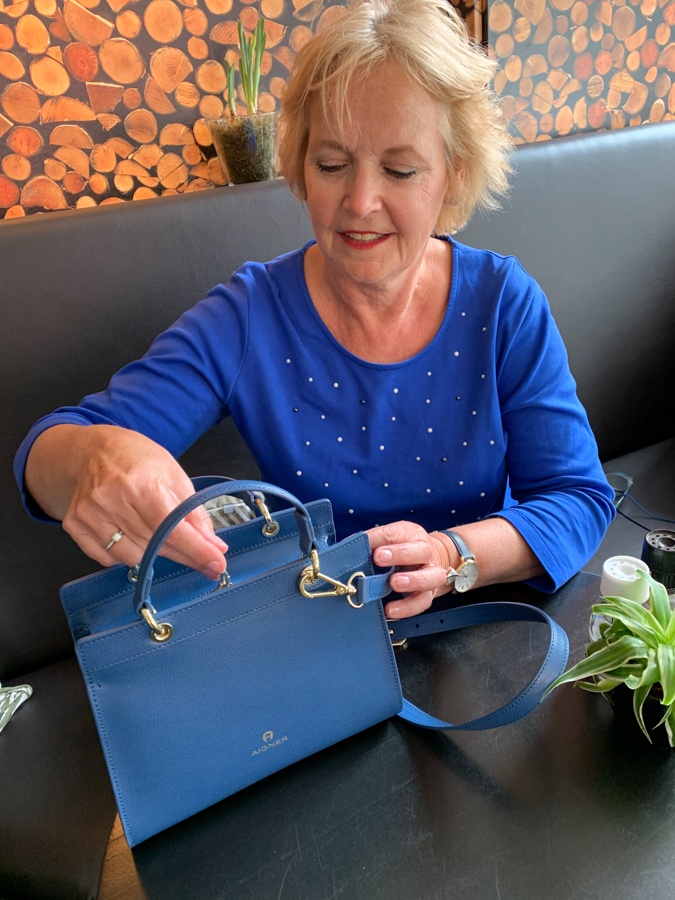 Below: We started near the church on the square (there is a dentist practice in the church these days). 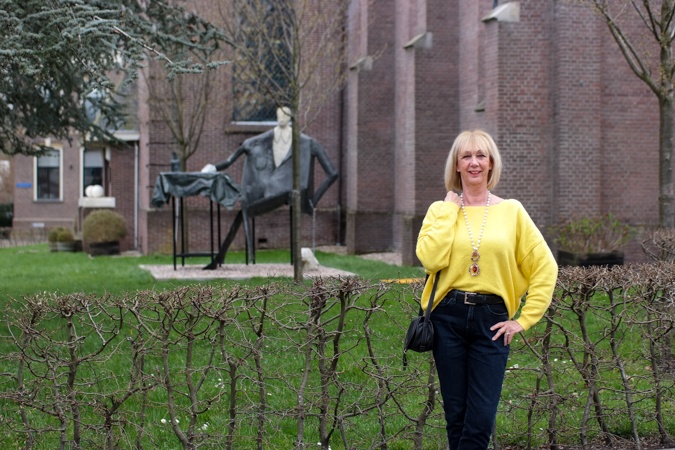 Below: Of course that piece of art needed further investigation. What an eye catcher. The white blob on a chain is of course a dog.

Below: “Help! I cannot reach the table.” 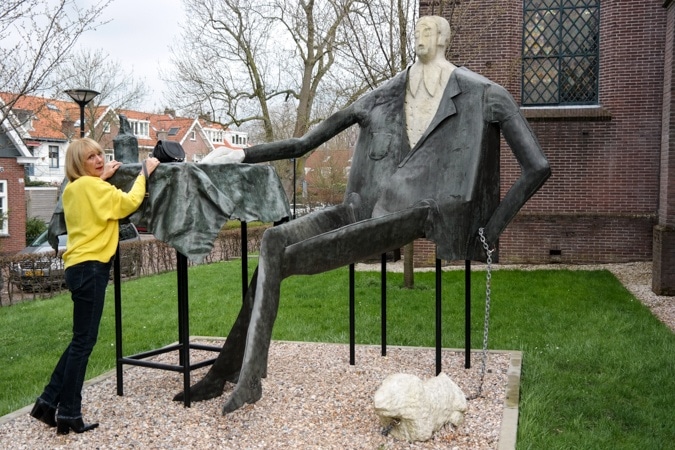 Below: Church doors are always favourite with me. Nicoline made me “eat” the leaves. She was really enjoying photographing and damned good at it as well. We used to be colleagues at an advertising agency where she dealt with clients. And after that she went into PR. So she does know a thing or two about styling, lay-out etc. 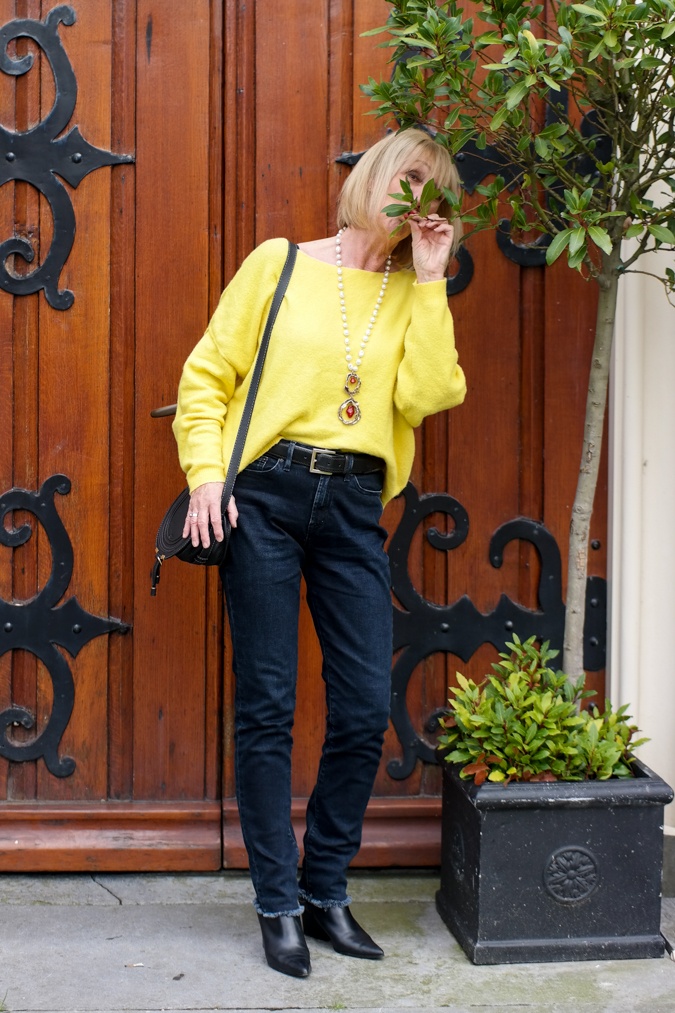 Below: Yep.. really good photo, although the sun came out and shone right on my chest. My hair is really long here but behaving rather well. Been to the hair dresser since and she cut it a lot shorter again. It is difficult to maintain its shape when it is longer (my preference). 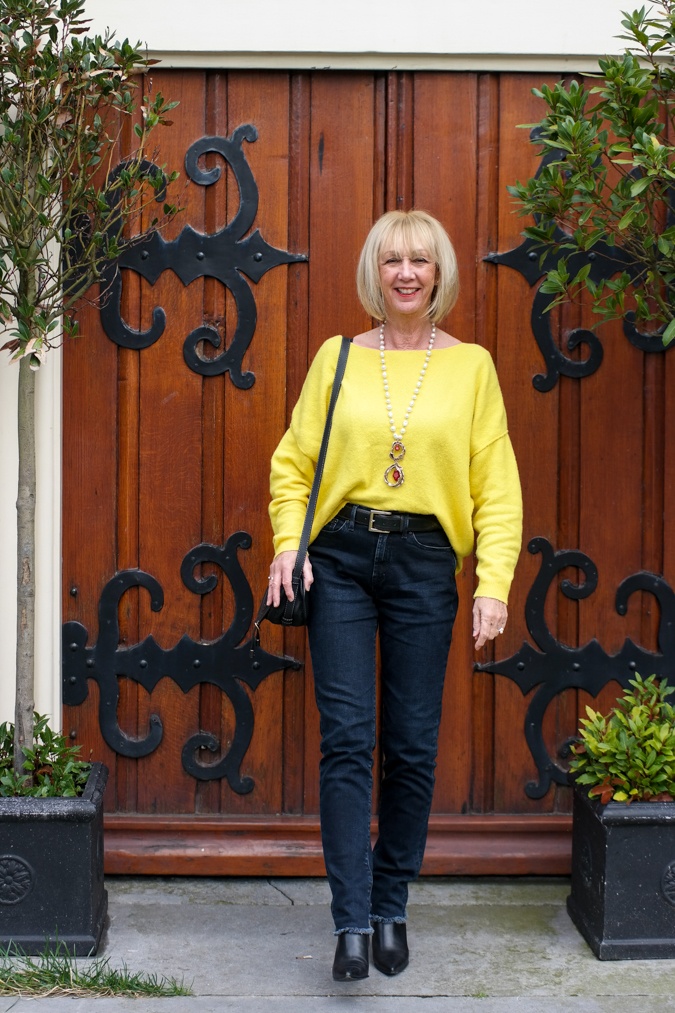 Below: Close-up of the necklace. I bought this at Geneva airport after the cremation of Pat, my dearest departed friend. I liked it a lot and every time I look at it, I think of her. It jangles when you walk (annoying but you don’t notice such things when you are standing still in front of a mirror trying it on, do you?). Pat would have called this my cowbell, I am sure. The brand is Weekend Max Mara. 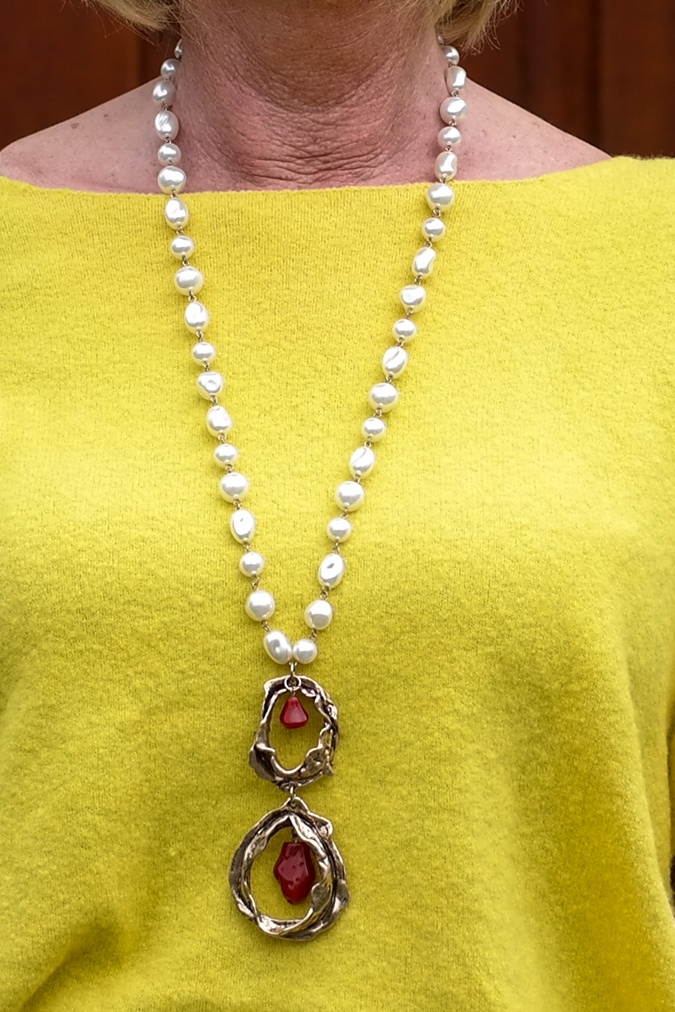 Below: One last shot in front of the side entrance of the church, where the top photo was taken as well. Frayed straight jeans by Denham, black ankle boots by Kendall & Kylie and black Marcie mini crossbody bag by Chloé. 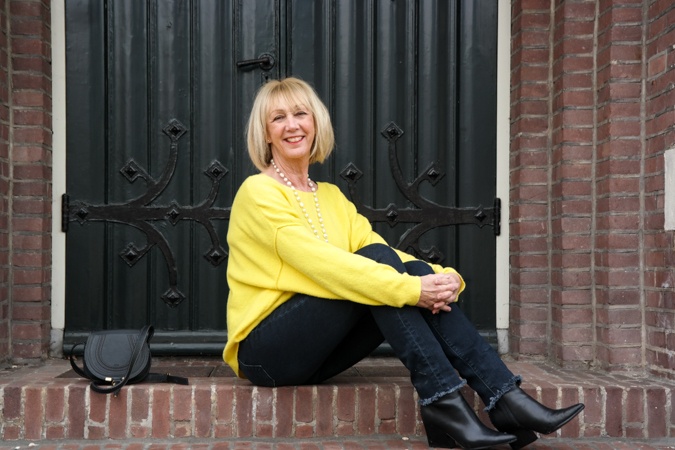 Below: We passed a shop, by the look of it an art shop. I liked all those primary colours. 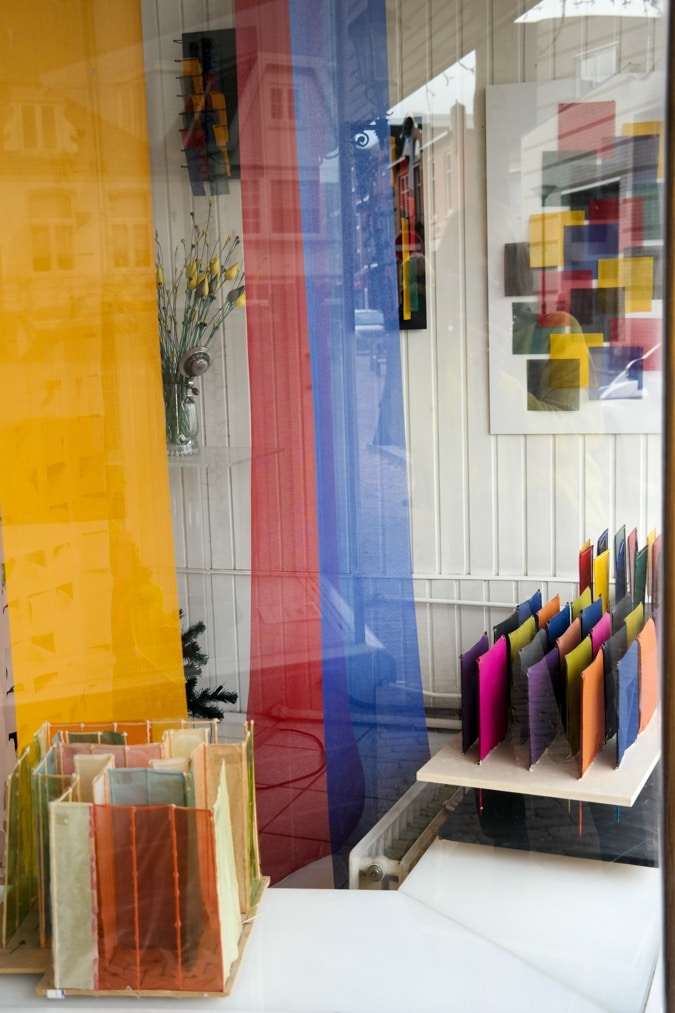 Below: In front of restaurant ‘t Hert (now closed). 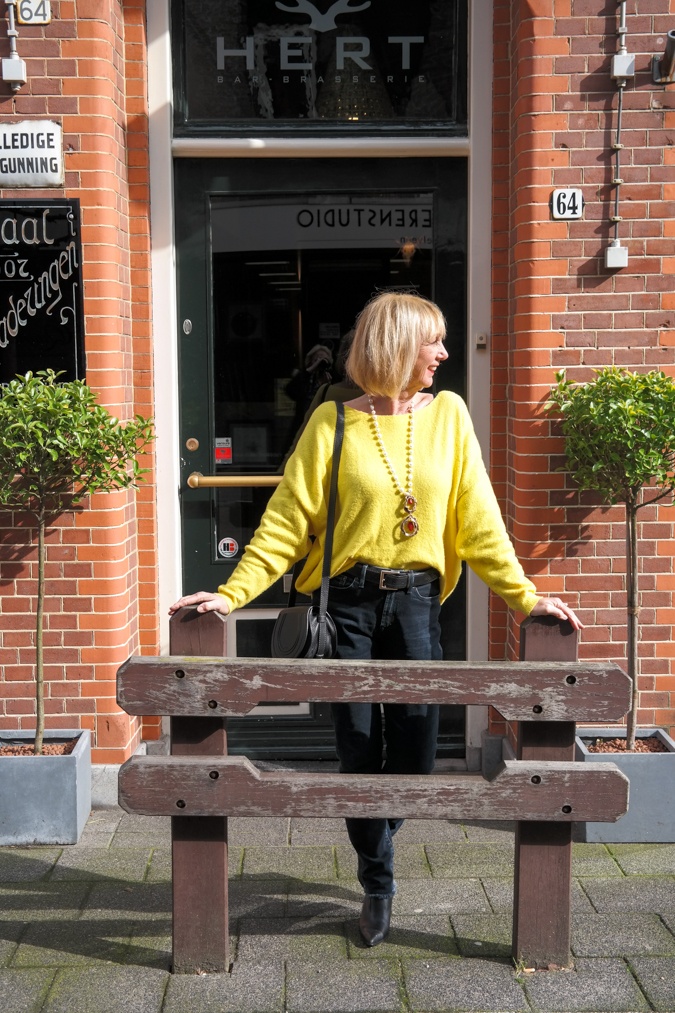 Below: Forgot my sunglasses and the sun had come out, so I walked back to the car to fetch them. Wearing contact lenses means your eyes cannot handle sharp light and sunshine. 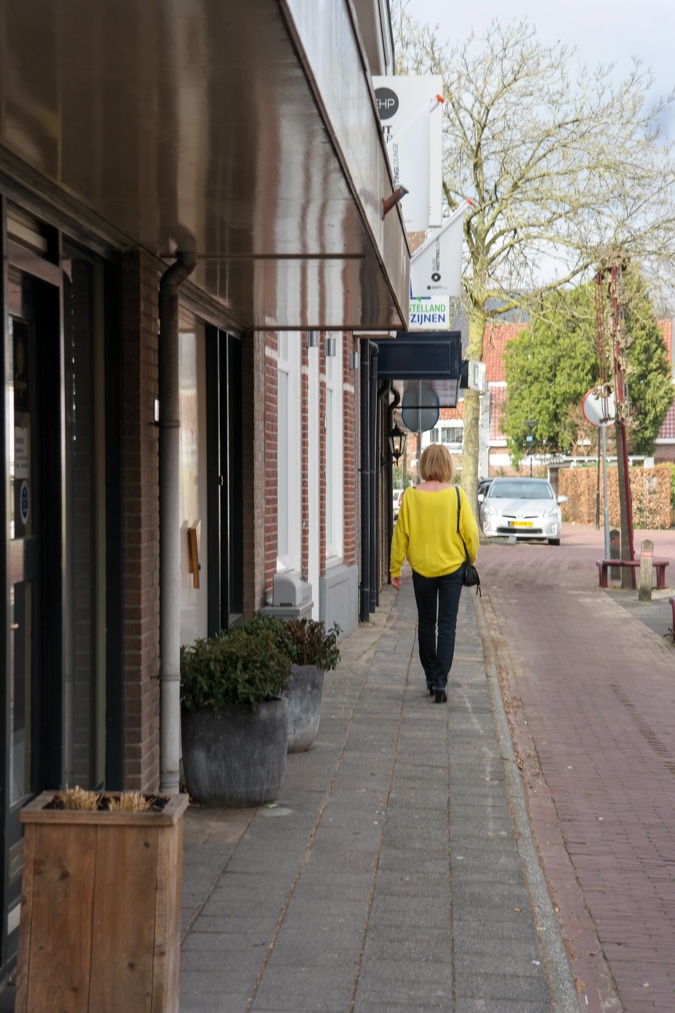 Below: Passing the window of a hairdresser (De Kapper). They had an eye catching display in the window. 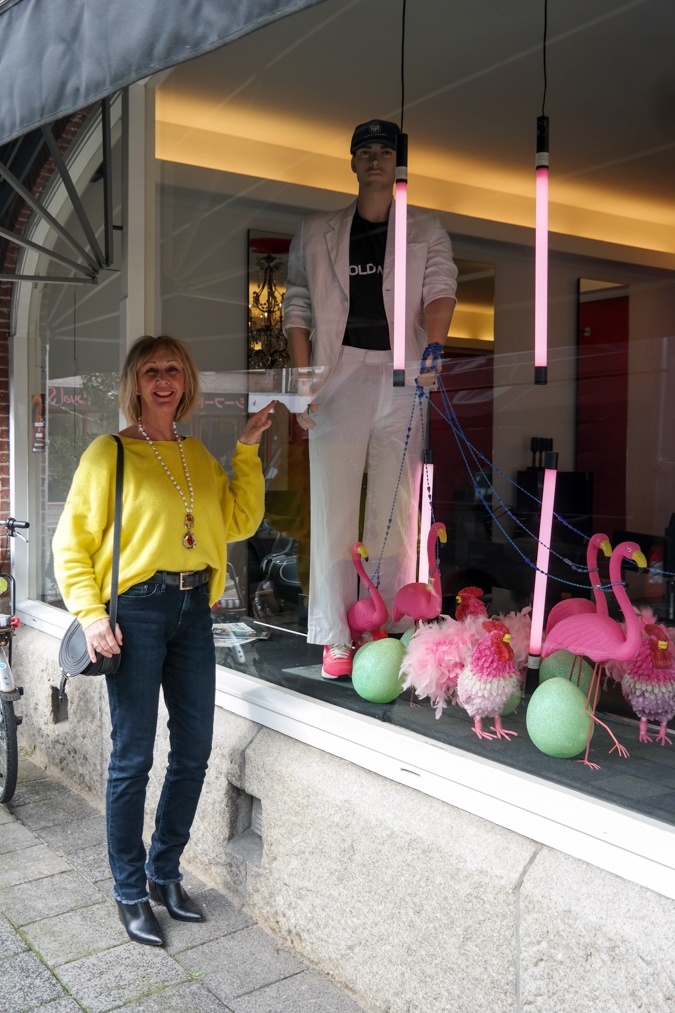 Below: We had to go inside and investigate. The ladies at the hairdresser were ever so kind and let us take pictures. 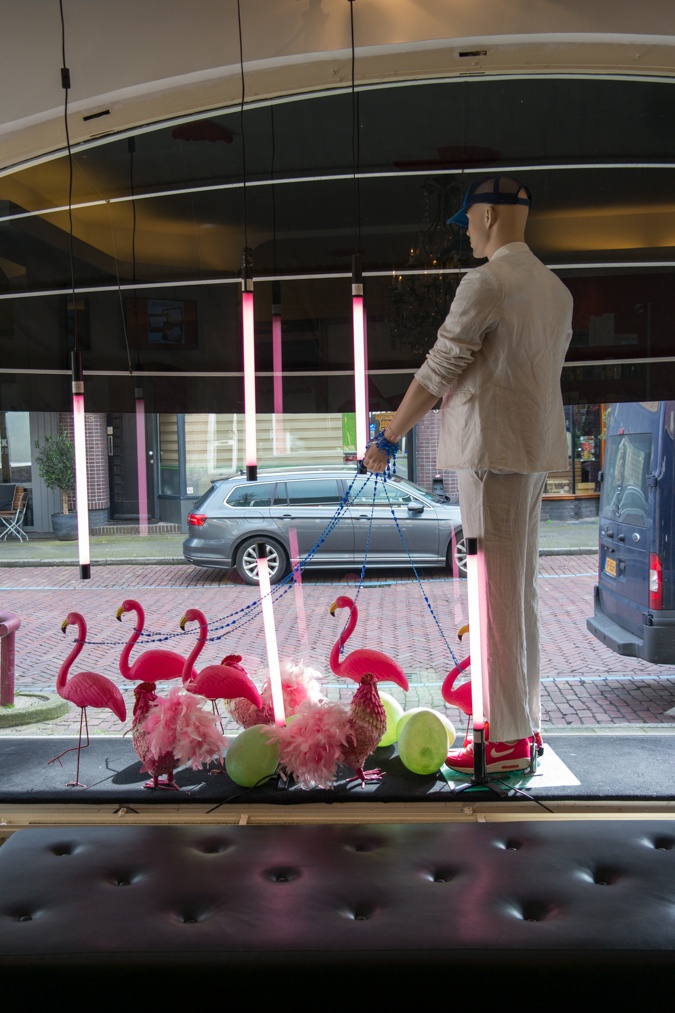 Below: How about this one? Nicoline came up with this very interesting angle. Via the mirror, me and the man mannequin reflected in another mirror, in one line, plus the chandelier in the picture. Well done Nicoline. 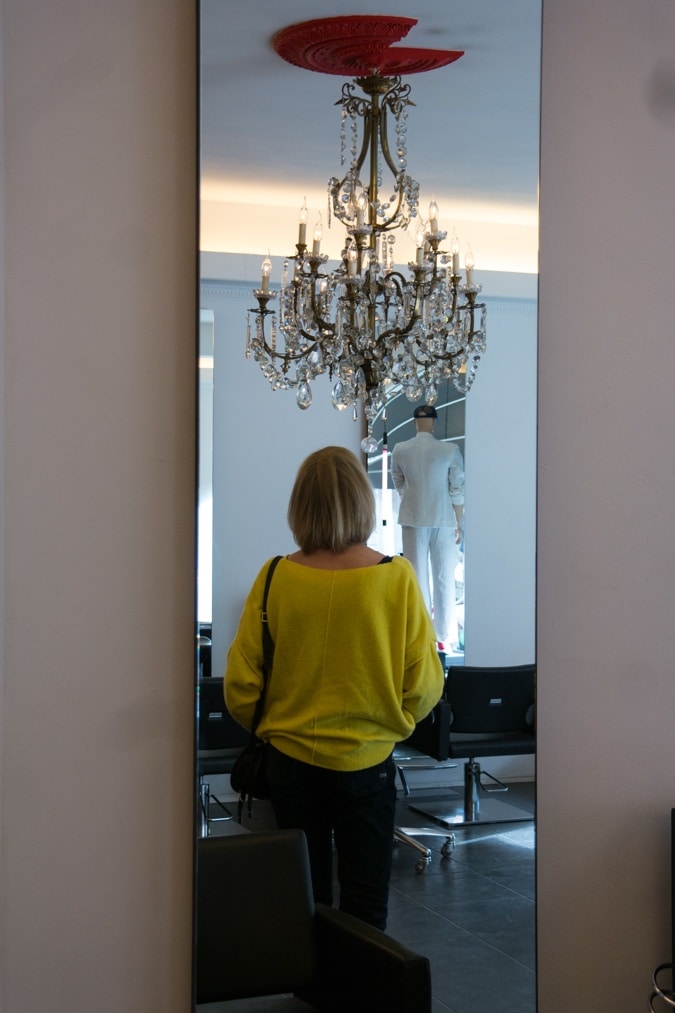 Below: Another fun feature: a ceiling decoration with a bite out of it. 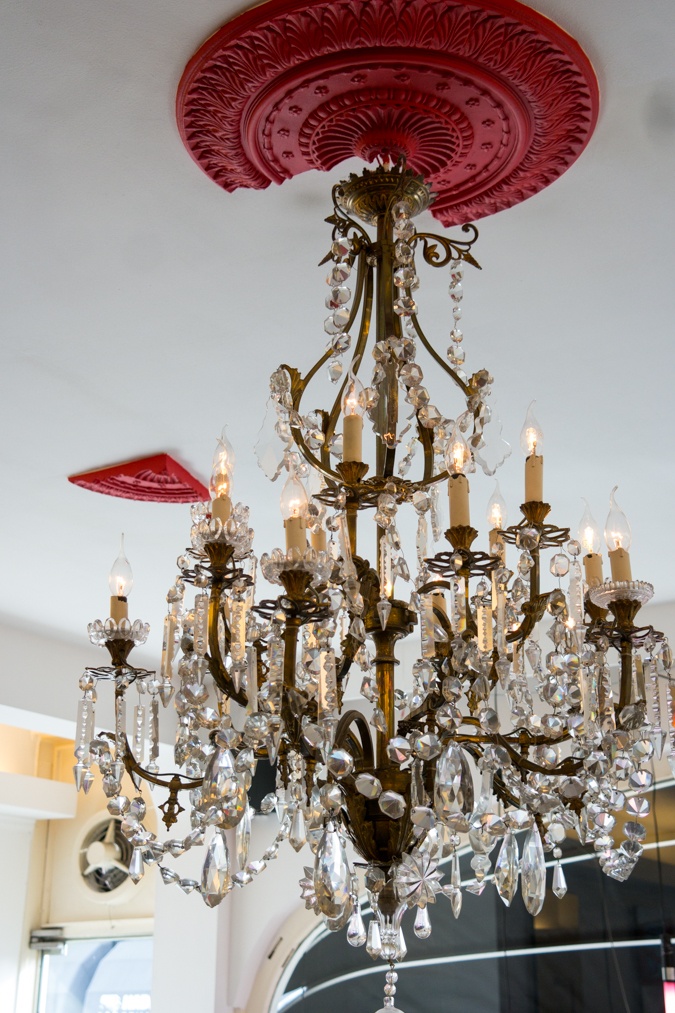 Below: The old station of Amstelveen is not in use as a station anymore. It has been converted into a bed and breakfast. I had a look around their website and found the rooms charming. Not very big, but full of atmosphere. From Thursday to Sunday they operate a small café and sell Green & Gifts. Unfortunately we were there on a Wednesday and they were closed. 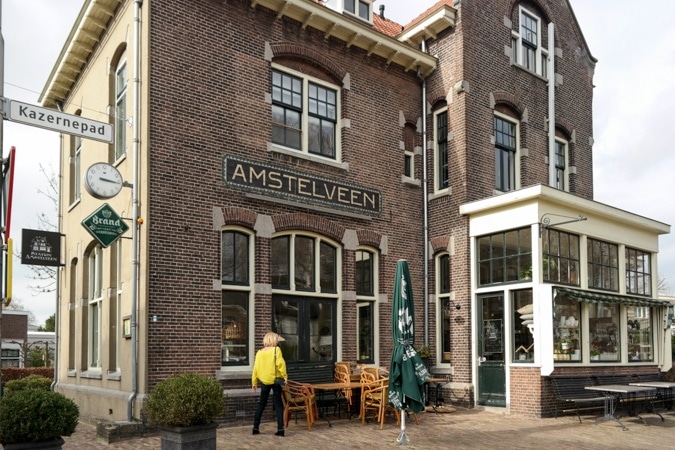 Below: It looked very cosy. The man inside is probably the owner. 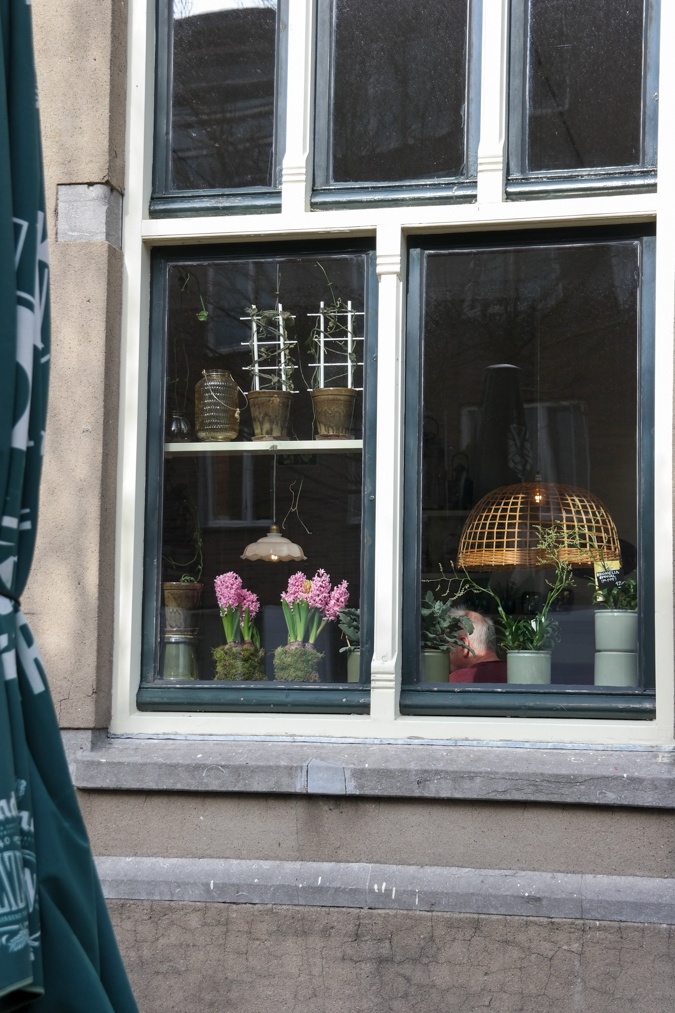 Below: As we wanted our coffee, we went into another lovely place called La Gare (French for “station”, which figures), situated at Stationsstraat 1. They had perfect cappuccino and delicious cakes. Very friendly service too. Here we are in anticipation of the coffee. 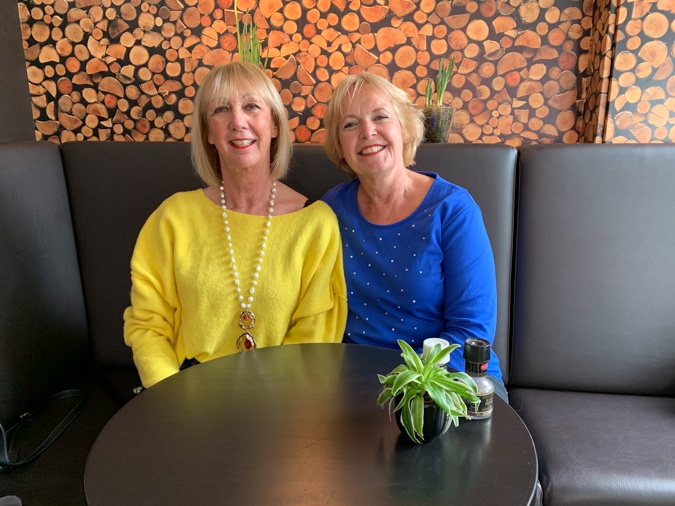 Below: When I saw this, I had to take a picture: at the WC there was light in the shape of a coffee cup… 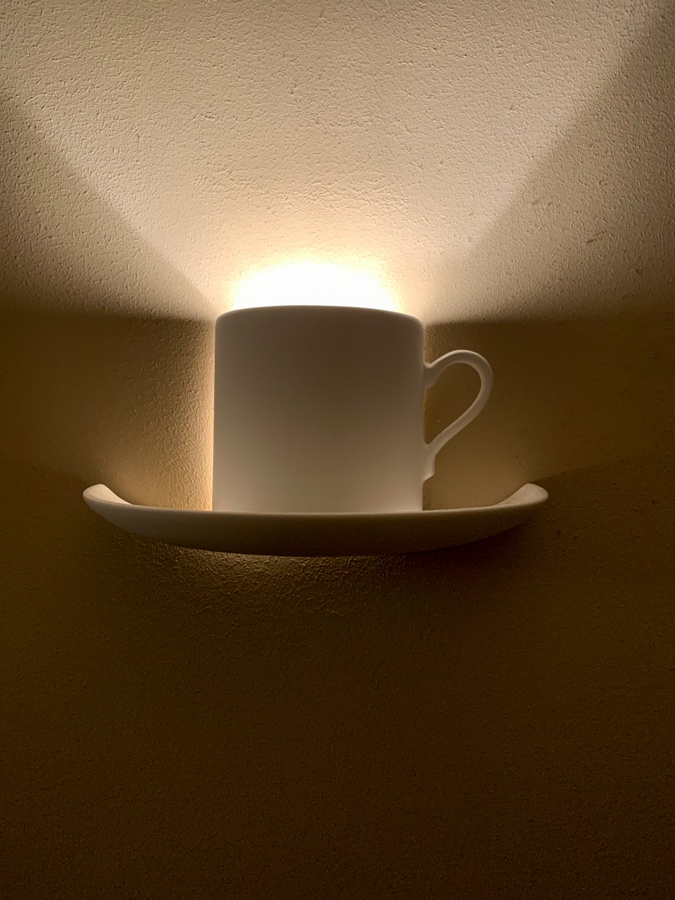 Below: … and the washing basin was in bright mosaic. Love it. 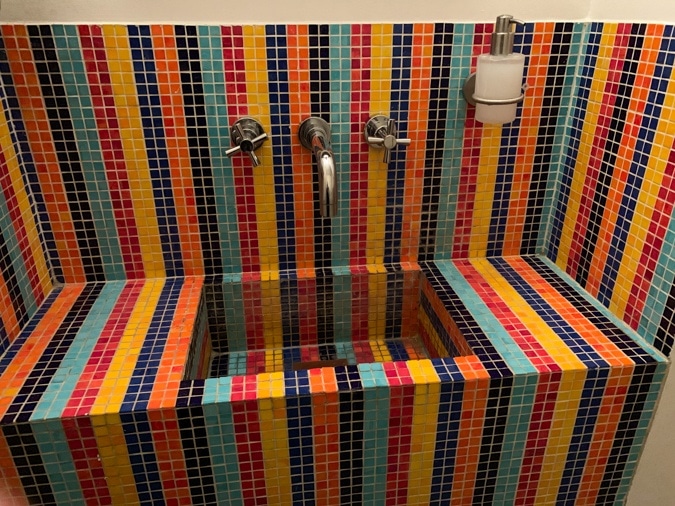 Below: Had to show you Nicoline’s shoes, which I only spotted when we said goodbye. Aren’t they cute?

All in all a perfect day. When friendship dates back such a long time, it is so easy to just pick up where you have left off, no matter how much time has passed.

Not just what happened this week but the week before as well as I posted the “bathing suit search” post only because so much was happening that I didn’t have time to do a proper post. Nor did I feel like it.

Of course at the beginning of February, our dog Charlie died and we cried a lot. Then on the 4th of March the news reached me, right in the middle of a big meeting, that my best friend Pat had died. Of course I knew she was very ill, having cancer through her whole body, but the news of her death really threw me. Another week of crying followed. As she wasn’t part of my every day life, living in Geneva, I thought I might not be so affected, but the opposite was true. Her husband asked me to speak at her service and I did. My brief was: wear colourful clothes and make a speech about funny events during our friendship; Pat had requested to keep it light and to celebrate her life. Of course she knew tears would fall as well. There were more than enough funny stories to choose from as she had an awesome sense of humour. I had already written a blog post which I was never going to publish as she wasn’t very keen on “being plastered all over the internet” as she would say. I used my post to write the speech and rehearsed a lot so I could do it by heart. I have to say, it went very well. There were laughs (loud ones) when there were supposed to be laughs. It was a great way to send Pat off. I hope she listened on a cloud.

Fortunately another friend of Pat, who also made a speech, travelled with me, which made the trip so much more bearable.

Two days later Watson arrived, our new puppy. Joy and happiness (oh what a roller coaster of emotions). Only Watson turned out to be 180 degree different from Charlie when she was a puppy. Charlie was quiet, playful and easy going. We thought it was the breed. NOPE, it was the dog. Watson was like a gremlin with water poured over him. A piranha on legs. Biting everything in a mad way. The couch, the chairs, us, our clothes, everything. See this short video as illustration.

And of course Watson wasn’t housebroken yet, so Ron had to get up twice during the night to let him pee. Ron needs about 10 hours sleep every night. This, combined with Watson’s behaviour, got Ron very stressed, which in turn, got the dog stressed and that led to even more biting. It nearly got out of hand. Then we found out the dog was very intelligent and bored. He needed to be challenged more with search games. That channeled his energy. And after two weeks Watson slept for 9 hours a night without having to go for a wee-wee. Thank God. He is still a handful but it is getting better and better. With spring slowly arriving and more sunshine, Ron takes him to his allotment where he can only damage plants, trains him and familiarizes him with things like escalators, lifts (elevators), markets etc etc. The marina is a special place to get to know, as in three weeks time the boat will be in the water and Ron always dreamed of boating together with his dog. Charlie hated the boat. We keep our fingers crossed that Watson will like it.

One last funny bit. Ron ordered a sign and put it up next to our front door. The sign says: “Dr. Watson. Consult only by appointment”, hahaha. 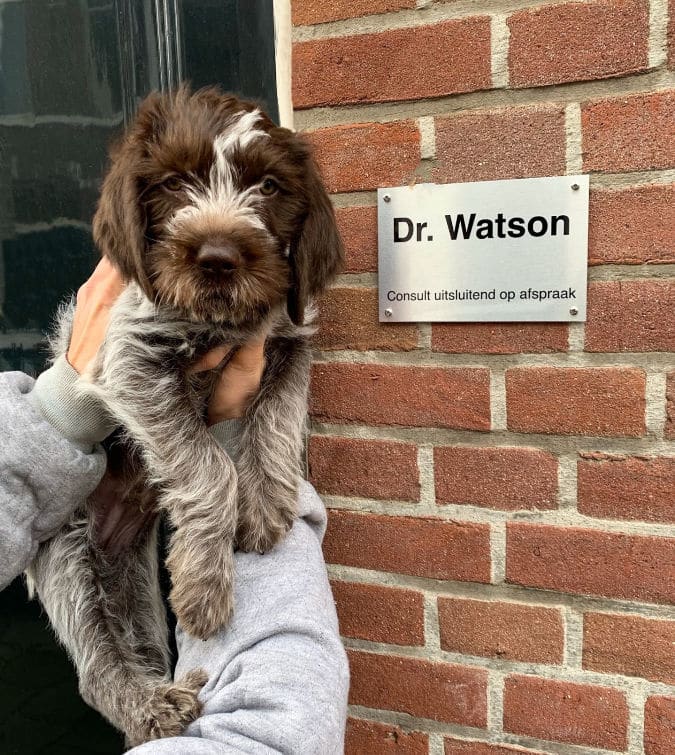