An orange leather skirt at the docks 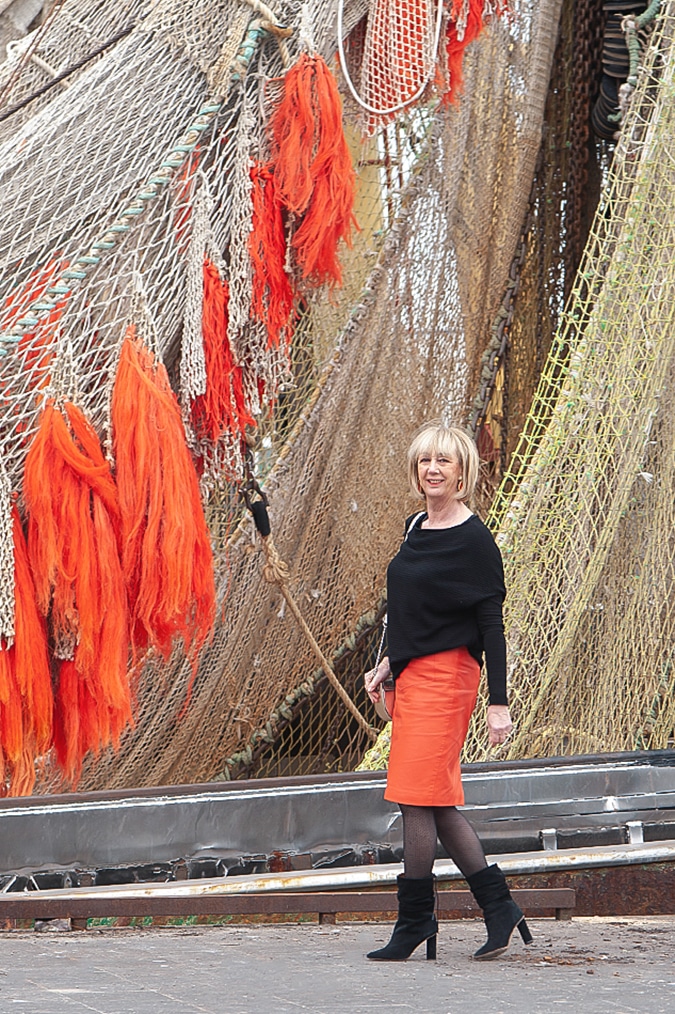 Another photo shoot in cold, cold circumstances, capturing the charm of this orange leather skirt. Husband Ron was the location scout and he found some marvellous backgrounds. Kitty was thrilled with these locations, which meant we had to drive to the harbour of IJmuiden. The harbour! Where the wind has free play!

You will see a lot of photos, all of the same outfit, some with and some without a coat. If I am boring you with too many photos, please let me know in the comments and I will reduce the amount next time.

Below: Ships in the background and I am still in coat and scarf, not doing too badly. 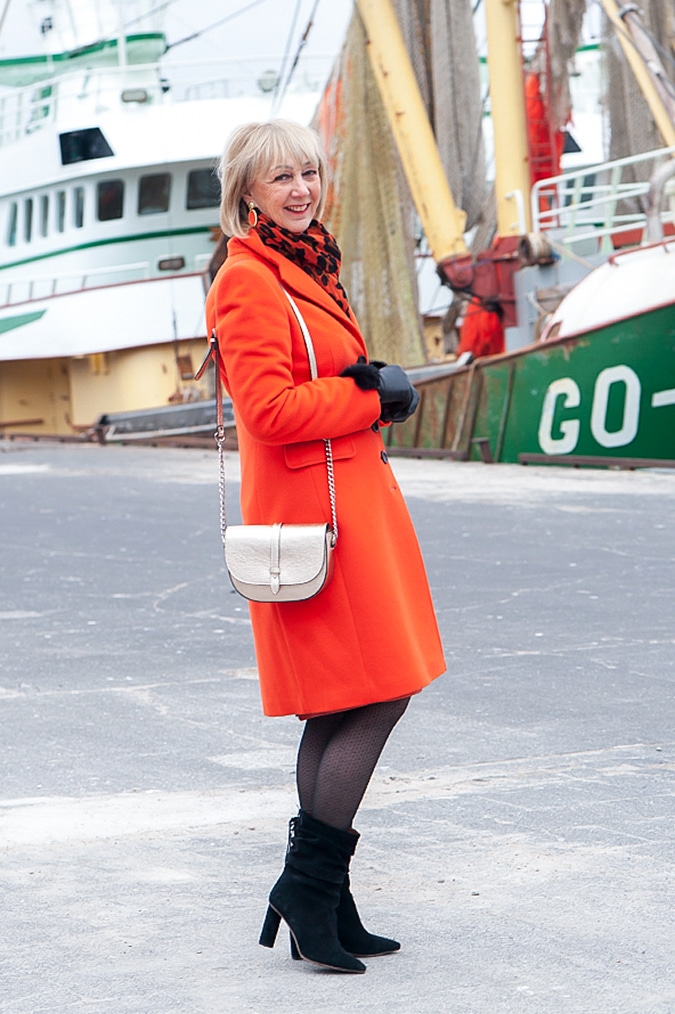 Below: The nose is slowly turning red. 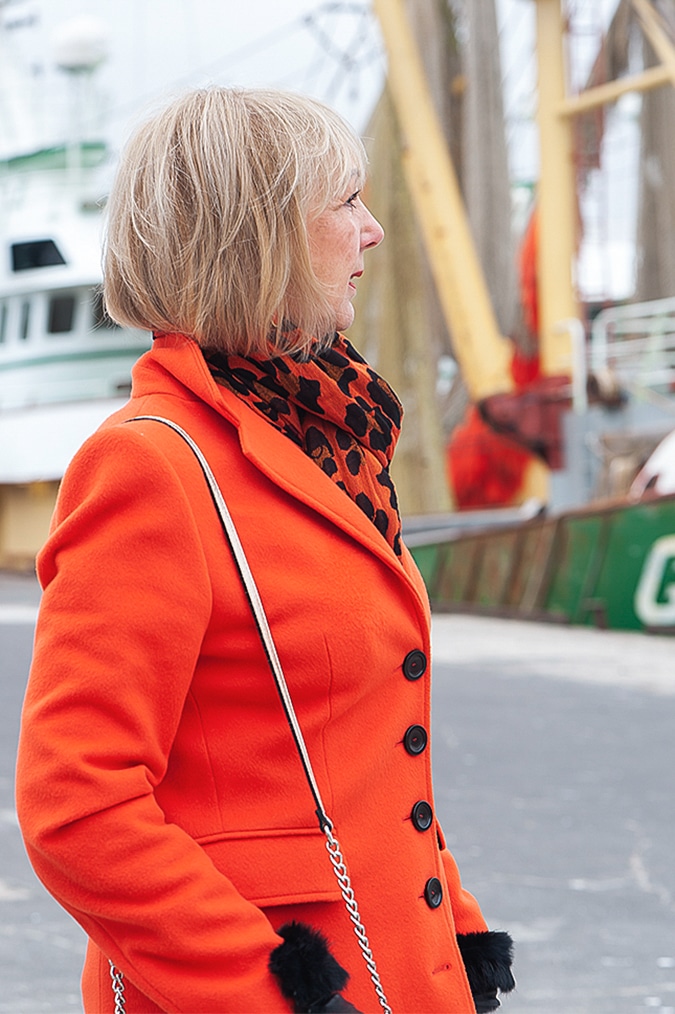 Below: Marvellous background. As if they knew I was coming in my orange skirt. You have seen it before in this post when it was a lot warmer. I am laughing, because Kitty was telling me off for slouching. 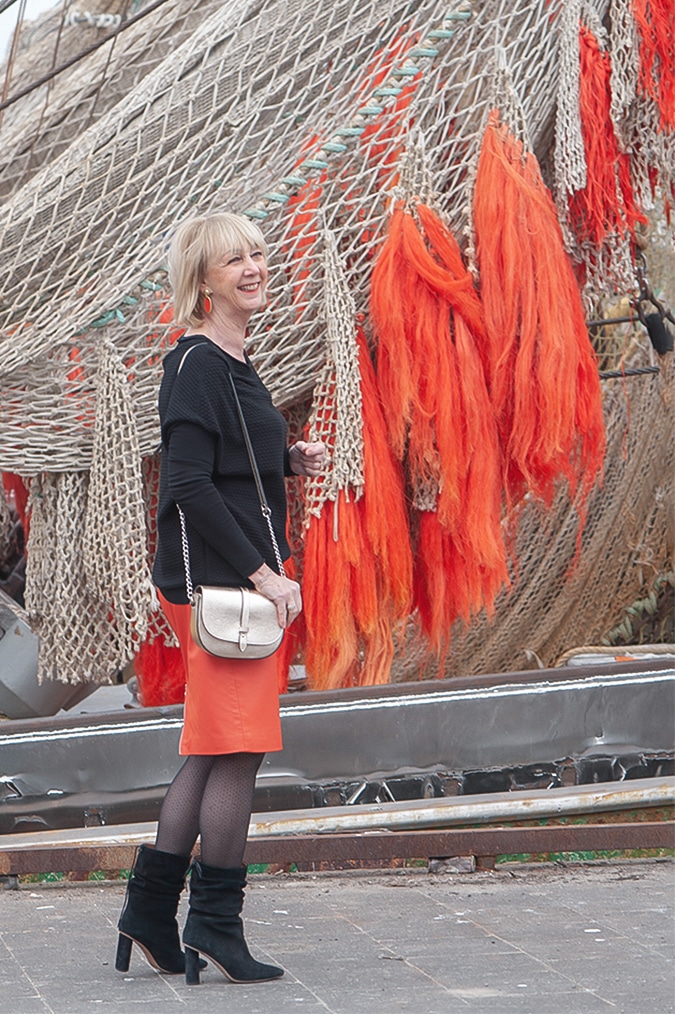 Below: There is a very dangerous (oh la la) zip at the back which goes all the way up. Until today nobody dared to play a joke on me by pulling it. 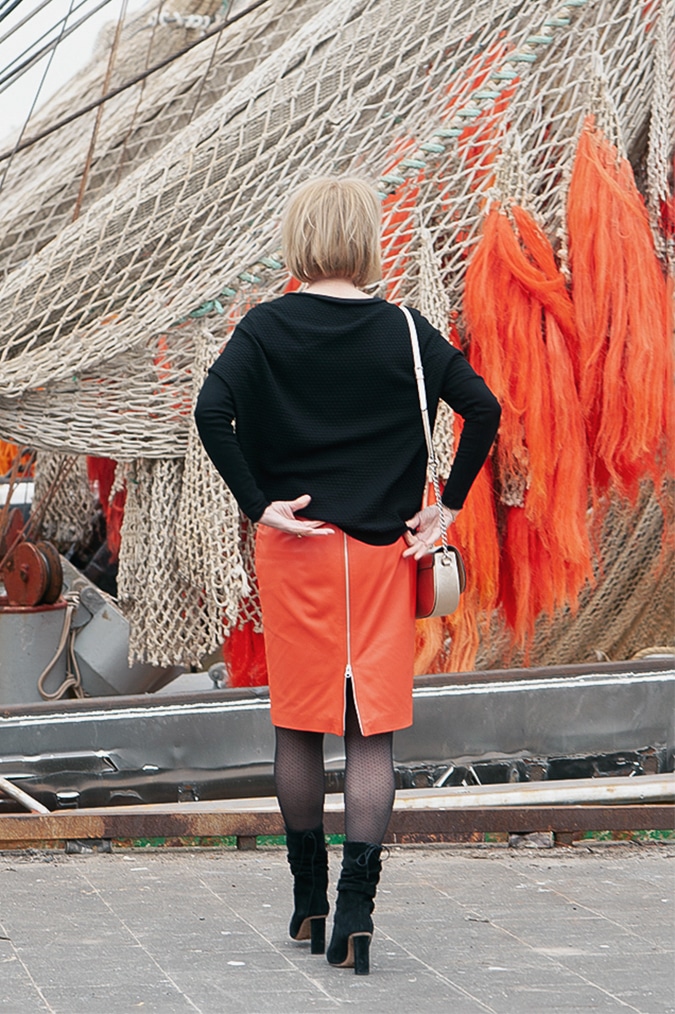 Below: This is an example of slouching but believe me, there were many photos where the slouching was much worse. We had moved some 50 metres to a harbour building. We love stairs. The boots are a couple of years old and by IRO Paris. The texture of the tights matches the texture of the jumper. 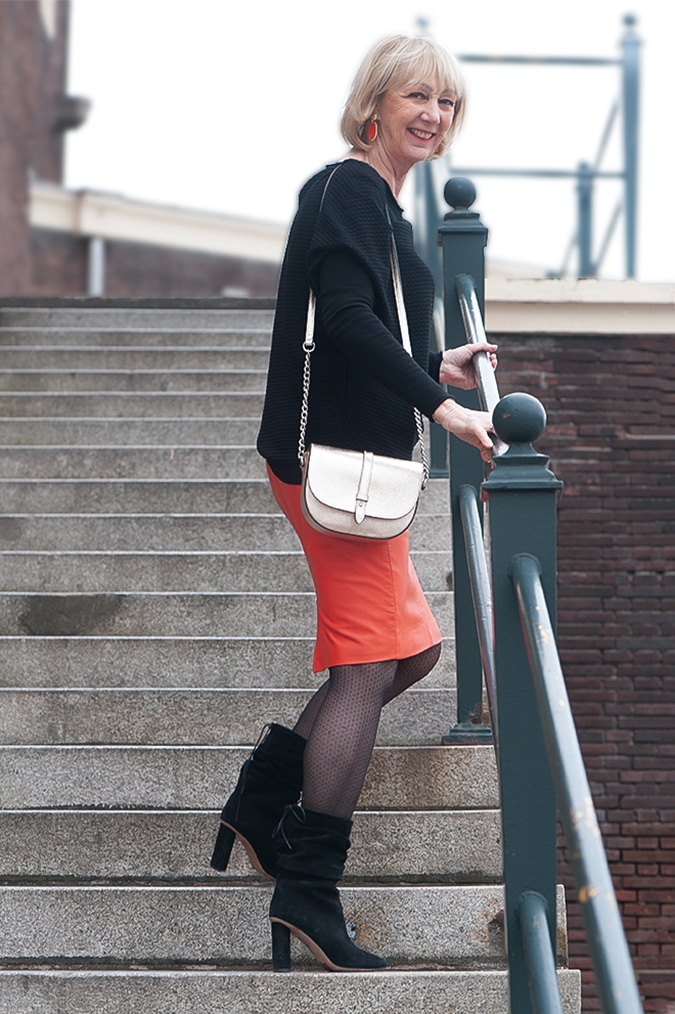 Below: At the top of the stairs was a vista to the boats. 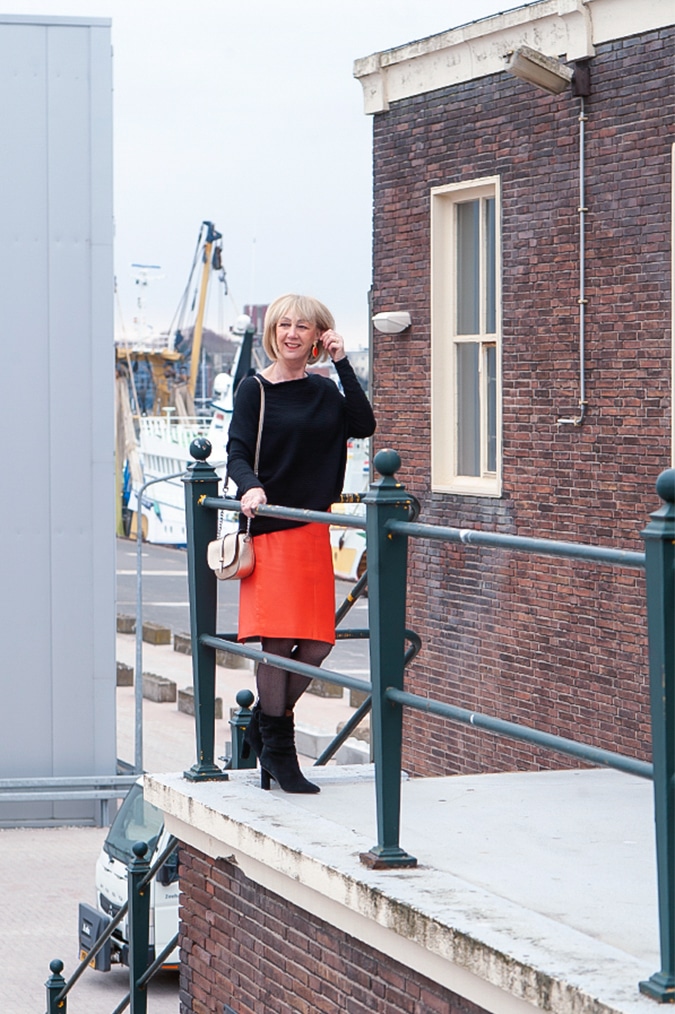 Below: A nice head-to-toe shot. 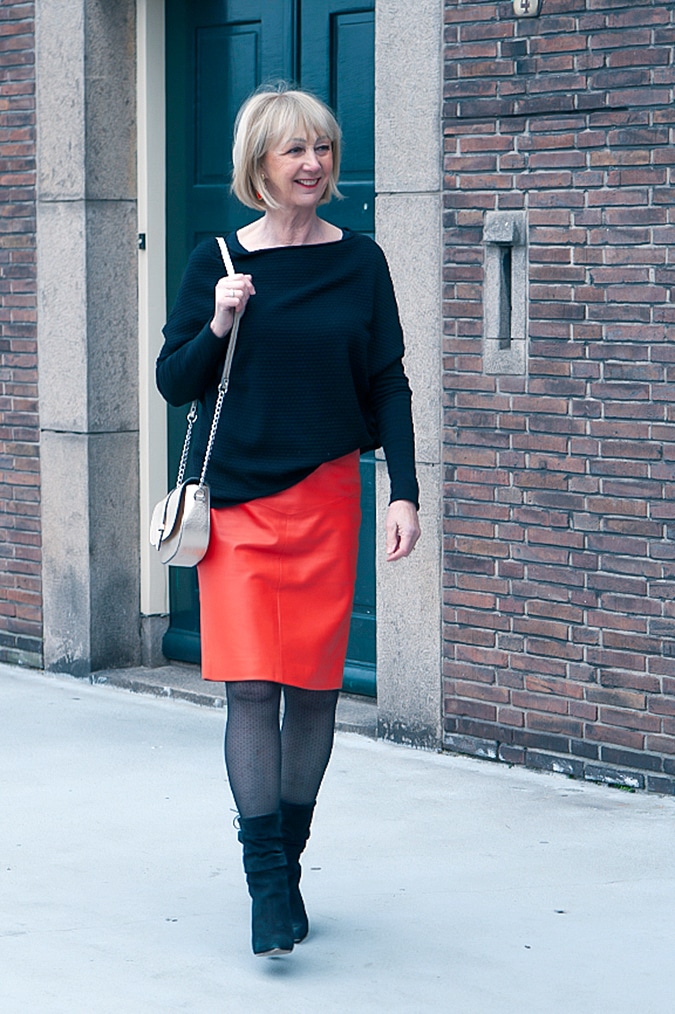 Next background was a bit further, to the very end of the harbour. A place where you got the wind from three sides, blowing in over open water. Get the picture?

Below: The statue of the stern fisherman was shat on by this seagull. There obviously have been seagulls before him. Do you think they take turns? 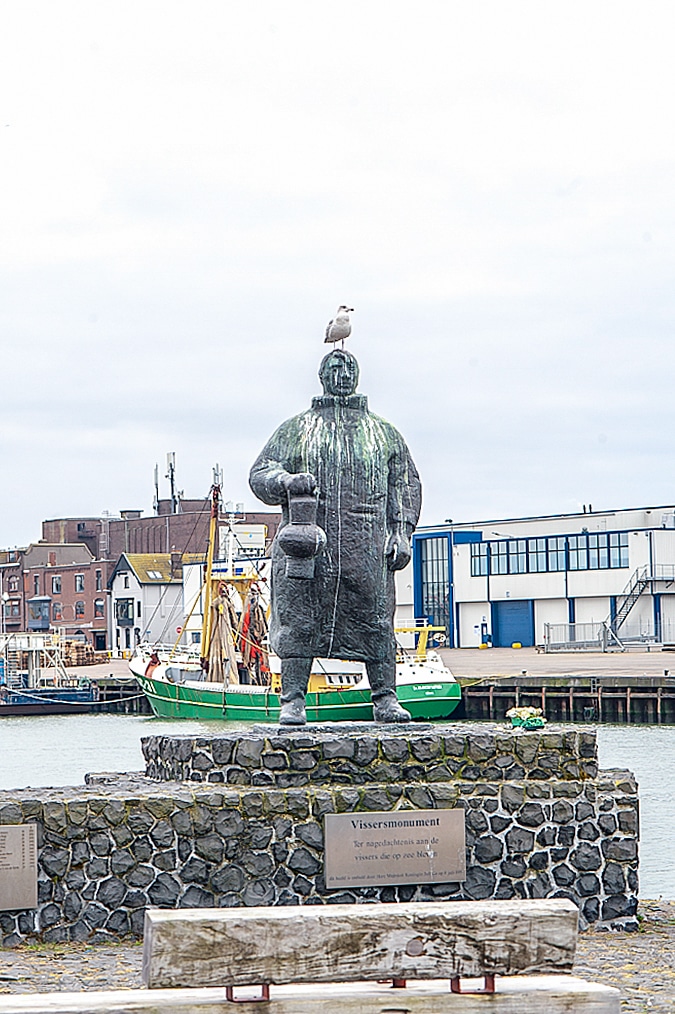 Below: A bench haha…a bench. MINE.
I put my orange coat on the bench to avoid getting dirt on my skirt. Apparently I wasn’t thinking as I wouldn’t have liked to get dirt on the coat either. Should have used the scarf to sit on.
Kitty managed to get the back of a passing ship in the shot. (Note: the lace at the back of the boots should have been tied.) 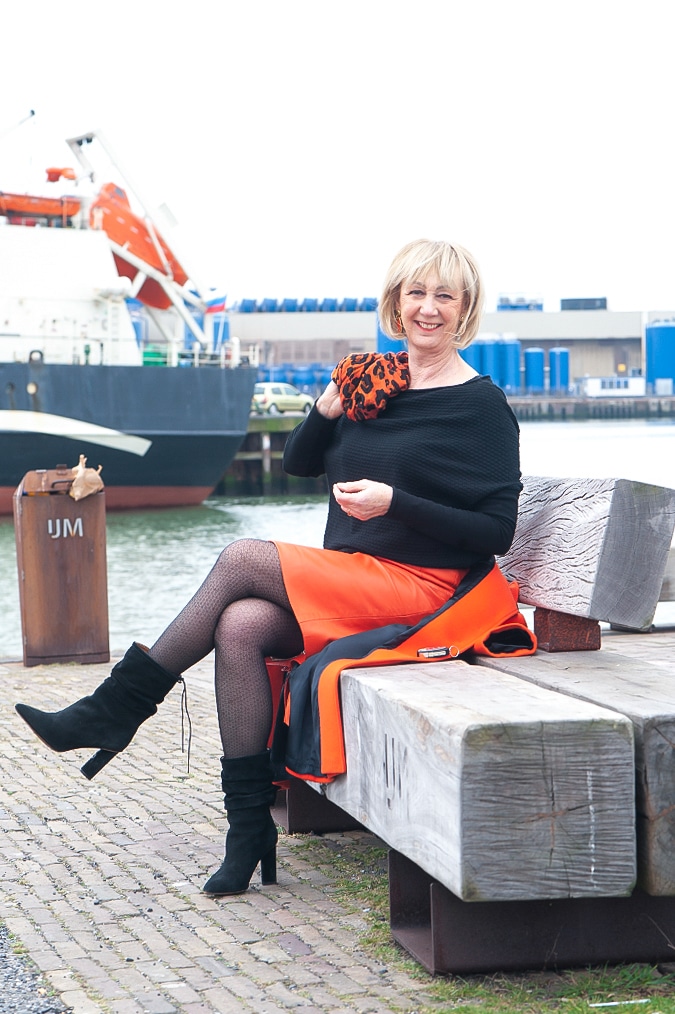 Below: I hoisted myself up there, yes I did. This time I sat on the scarf. As I was climbing up, a man called out to me: “Hey girl, put your coat on!” Haha. He was in full winter gear. I told him “No, can’t do; sacrifices have to be made for fashion photography”. 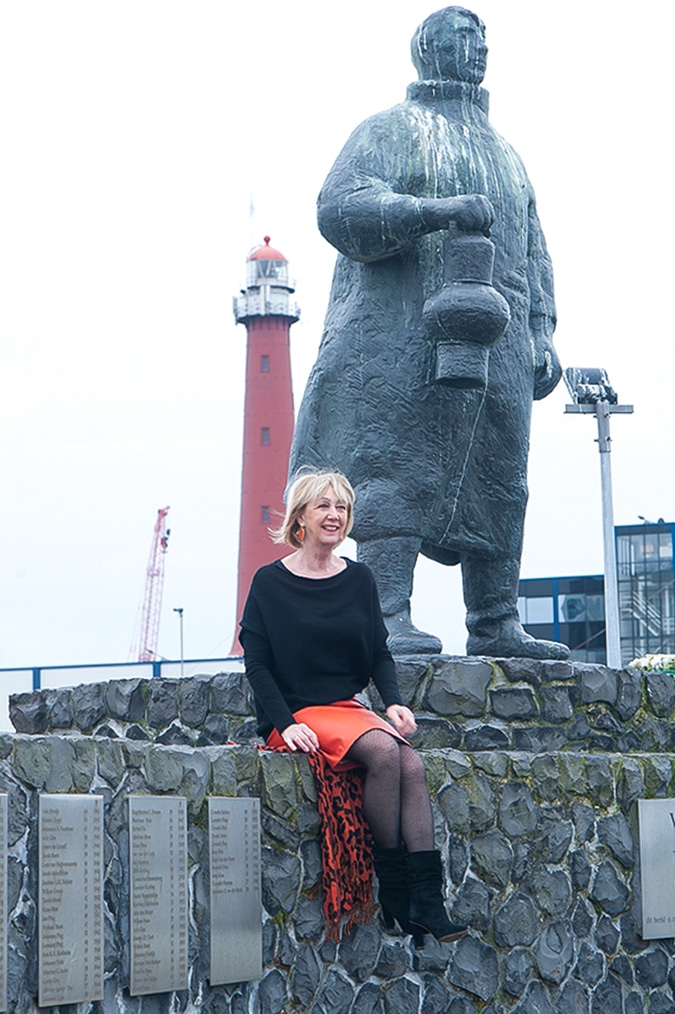 Below: One last photo, a close-up of the orange earrings. By Lara Design of course. With such cheerful earrings I can ‘neutralize’ the inadvisable effect of the black jumper on my face. 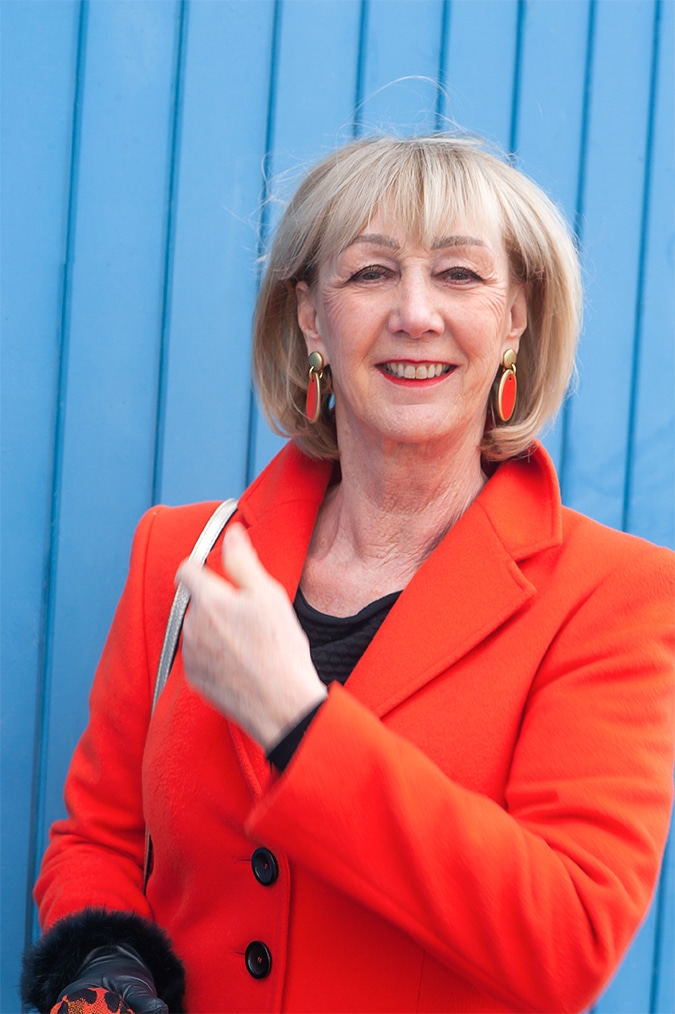 Ron has found more backgrounds amidst horrible conditions. Kitty loves those locations too. Life of a model is hard.

Through my help, I learned about the cleaning cloths of IZI Clean. I had ordered a dozen cloths and took two of them to my mum, whom we visited again last Saturday (no photos this week). These cloths are fantastic for smooth surfaces. Did the outside windows at the back which was a first haha. You can use them damp without any cleaning products. Terrific. Gave two to Kitty, who immediately cleaned her whole house that evening. She was just as enthusiastic. So funny to rave about such a product, but hey, anything that makes life easier is welcome.

Last week I showed you my new jewellery cabinet and my little office. I thought I would give you some background on the paintings. They were painted by a female artist who is Down’s syndrome and this was the subject (a bookcase): 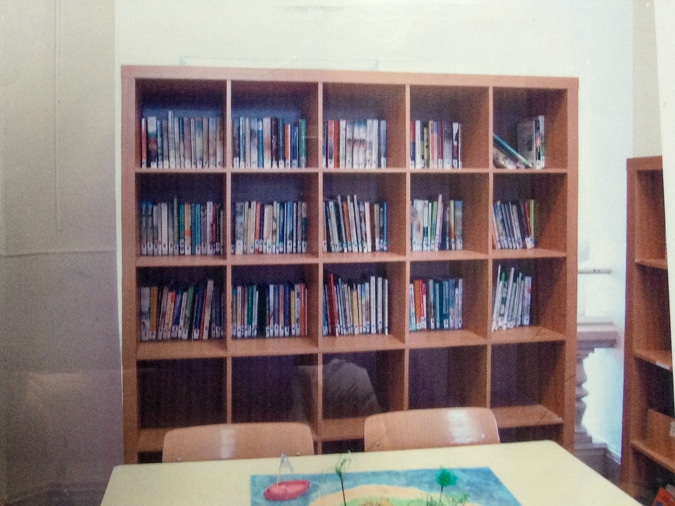 I think it is marvellous how she created these paintings from such a boring subject. I had trouble photographing them as I don’t have enough distance in my room. 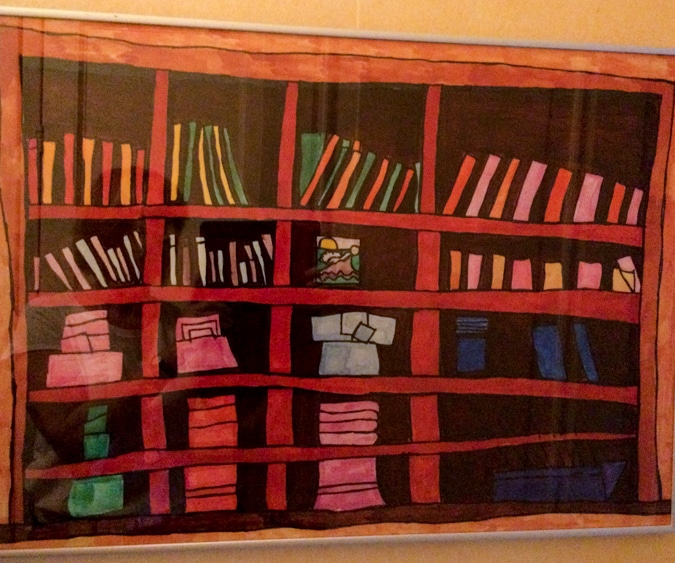 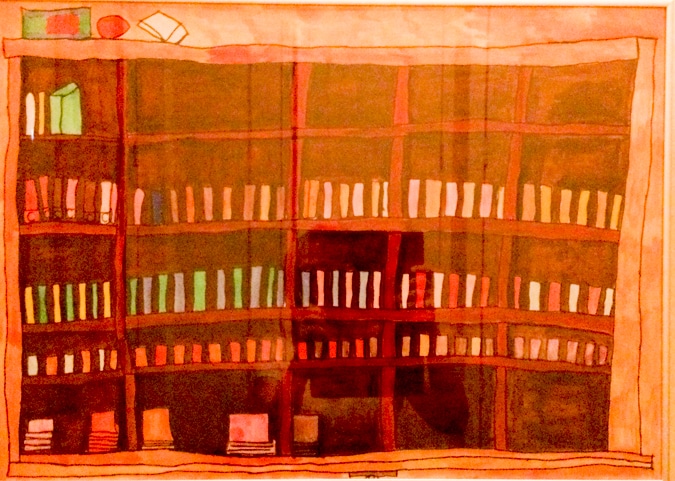 Below: Remembering the photo of me in my grey bathrobe, made me decide to buy another one. As luck would have it, there was a leaflet in the mailbox of a young company called Jacqi, advertising this one. Blue with white. I say it is a huge improvement. Jacqi does ship internationally and they have 6 different bathrobes. I gave you the link, see for yourself. Next on the agenda are slippers. 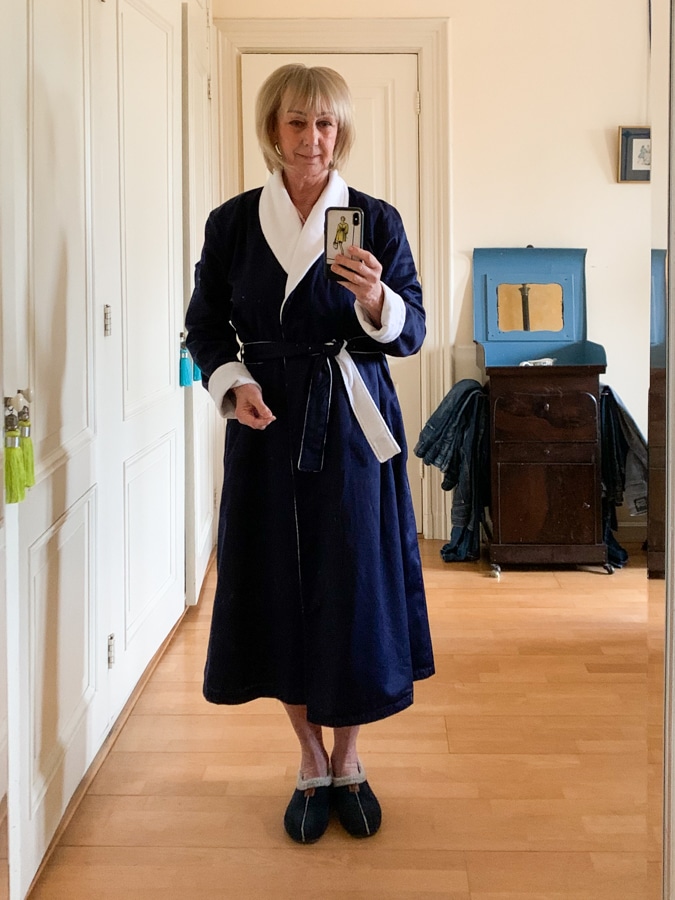 Sunday Kitty and I did this shoot with my orange leather skirt.

I filled my Monday with a visit to the doctor for something minor. The circles under my eyes are really deep and red and people started to ask questions. The doctor couldn’t find anything wrong with me, which, of course, is a good thing. Met with my friend Yvonne and had a good chat.

Tuesday started with a phone call by Marcella, the owner of Lara Design, after which Loes came for a coffee.

Below: I took a quick shot of Loes, just before she went off to the hairdresser. 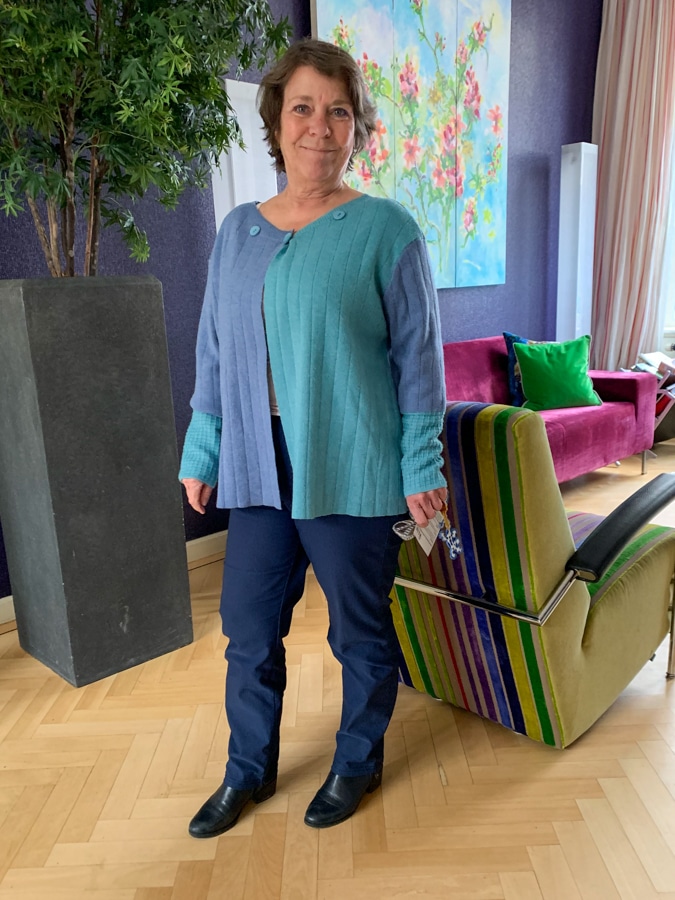 Then I drove to Marianne as she was celebrating her birthday. I only handed her a gift and will visit her this weekend. She has to spread her number of visitors, right?

Below: Marianne with my present in one hand and her phone in the other (I interrupted her phone call). Assembled all the details for my tax return in the afternoon and did most of this blog post. Until I could watch Oprah with Harry and Megan in the evening. People will talk about this interview for decades.

Wednesday was a day out with Ron to the town of Amersfoort. Such a beautiful little town in the middle of the Netherlands. I could have photographed so many beautiful houses, but only took this one below. 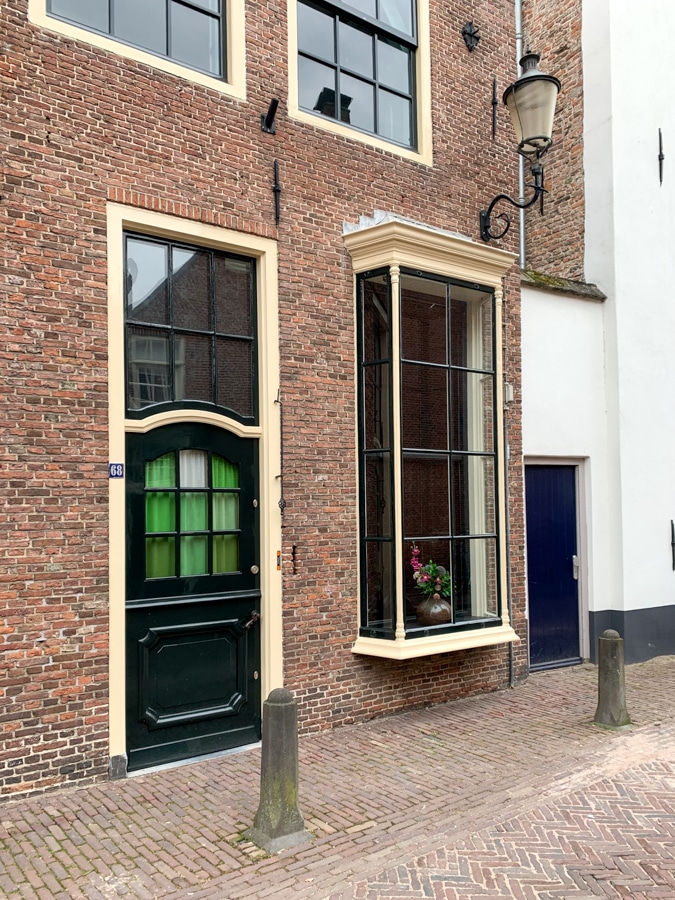 On our way back we picked up a clutch I had given to Nicky (my stepdaughter) as my next-door neighbour Ingrid had asked me this question: “I think I need a clutch for my handkerchief and phone at the wedding. Where do you think I can shop best?” I told her: “In my closet!” I have a blue one and a yellow one. Plus the pink one I gave to Nicky. Now she could choose.

Thursday morning we slipped a single (one of those old fashioned records with just one song on either side) though the mailbox of our next-door neighbour. Ron found it through the Dutch equivalent of e-Bay. It was a very old and very famous Dutch song with the title: “Tomorrow I am the bride” by Willeke Alberti. He meant it as a little joke, but a couple of minutes later we could hear they were playing the song very loud. So funny. My husband has the best ideas.

I spent most of Thursday at the house of my friend Katrien. I had forgotten to take a photo, so I asked her to send me one. She is very creative and is going to make me a coat.

Below: Katrien. Don’t you just love her dress? 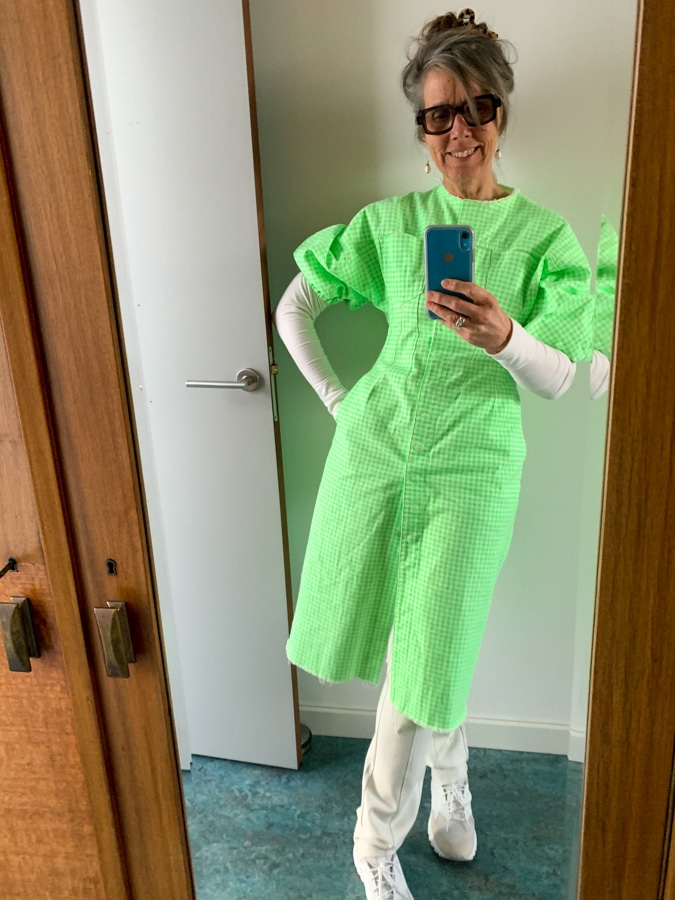 Friday was the day of my neighbours’ wedding. The groom had arranged a bubble gum pink stretch limo to take them and a couple of neighbours to the city hall. We were among the lucky ones to join in the limo, so I could wear high heels. The bride (who is practical) had said they would cycle to the city hall as it was only 5 minutes by bike. The rest of us didn’t think that was a good idea. High heels and flowers and such.

Below: The limo was a big hit. We had to take a few detours before we arrived here in the centre of town on the market square. It cannot go round all corners. Perhaps it is a daily sight in America but not here in the Netherlands. It got a lot of attention. 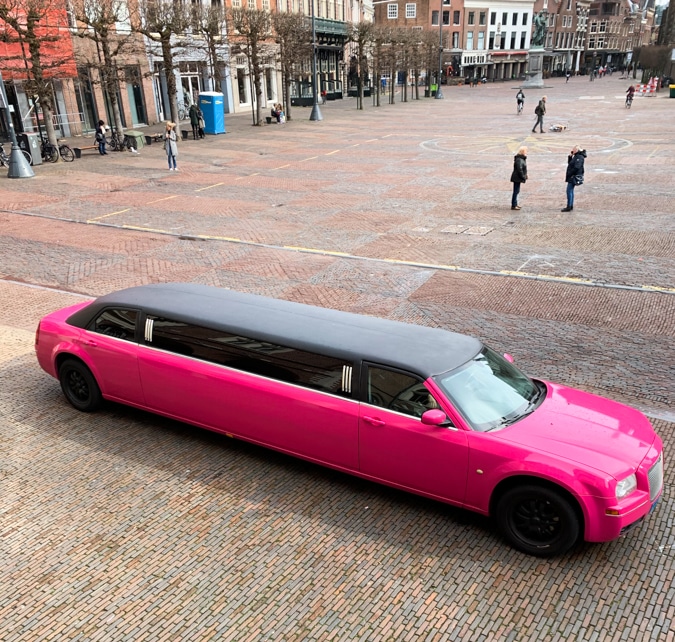 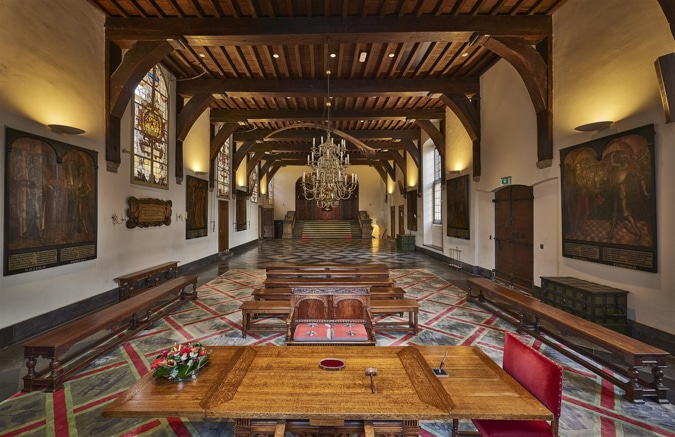 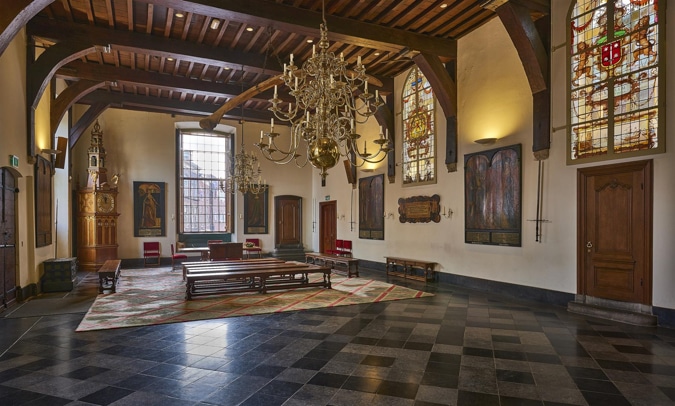 It was a splendid day. Cold but as we set off, the sun started shining and the rain fell after we were safely home again. Such a good day.