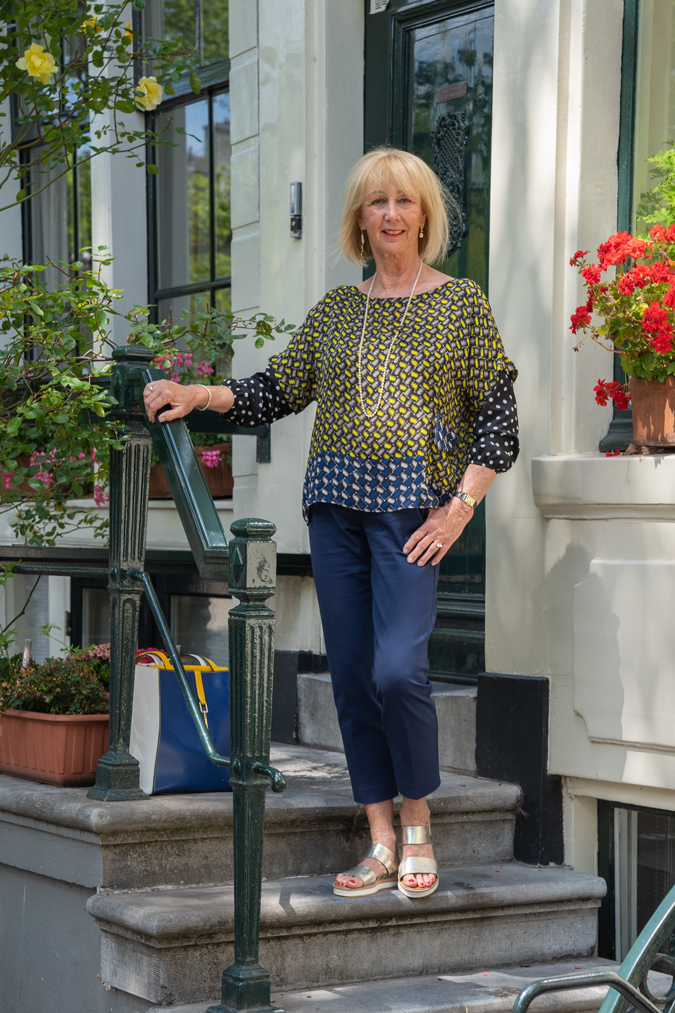 On a little tour through Amsterdam I wore my Kenzo top with blue trousers and very comfortable golden sandals. The top has been in my wardrobe for many years but I used to wear it only with a jacket because the sleeves are quite short and my upper arms very wrinkly. Ron says I should accept that my skin shows my age, but I am afraid I cannot bear it. I don’t like wrinkly skin, I don’t find it attractive to look at so why would I expose it? At the same time I am pretty jealous of older women who don’t give a damn and wear tank tops. What a heavenly state of mind. I solved my dilemma by elongating the sleeves with a polka dot print. (Link to an old post with this top where I put a long sleeved shirt underneath it. Not my favourite styling.)

As I showed you a couple of weeks ago, my friend Helena (below) was my photographer that day. She used to be a journalist at a trade magazine in the advertising industry and that’s how we met several years ago. We visited the area of Haarlemmerstraat in Amsterdam. 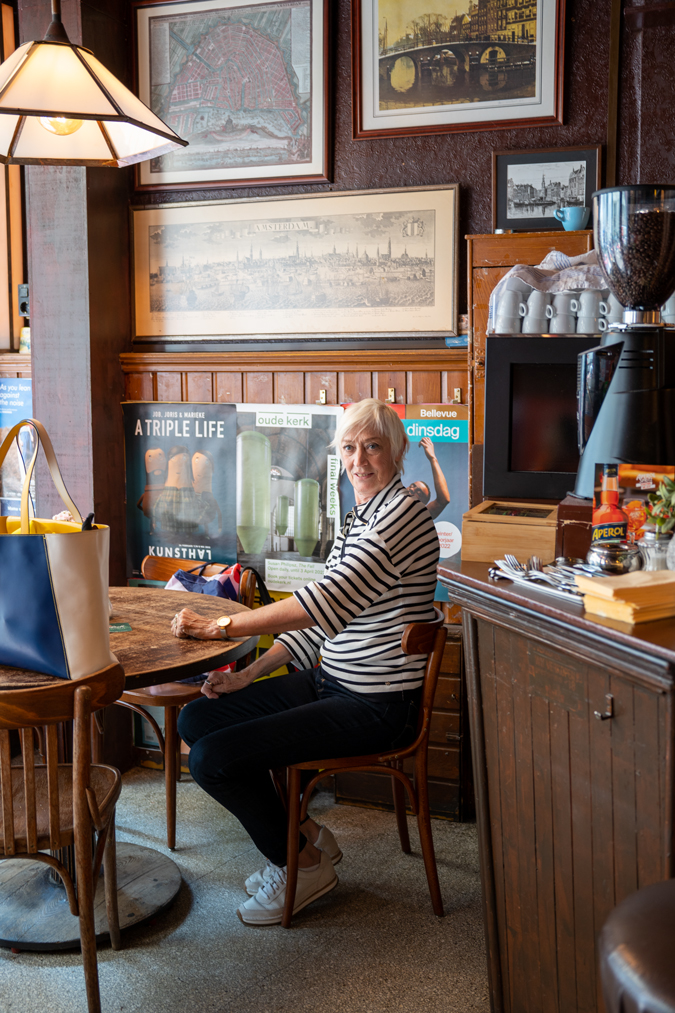 Below: This is the interior of the café. What we call a brown café. For obvious reasons I’d say. 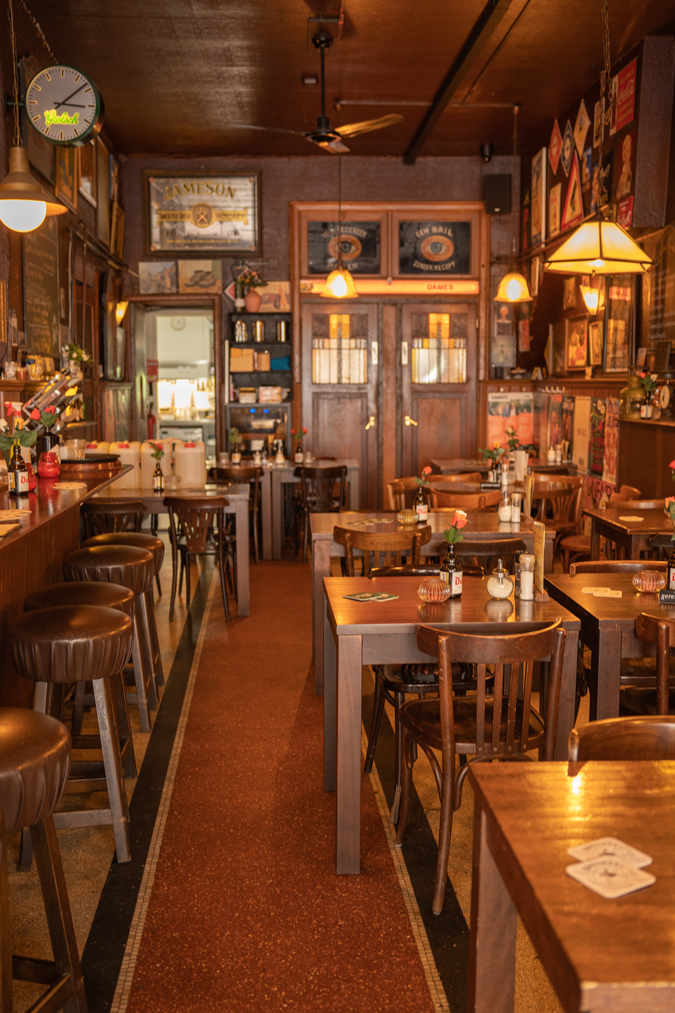 Below: On our way to take some photographs, we passed this house. Apparently the basement is inhabited as well. The shutters indicate that in the old days the basement was used to store coal. 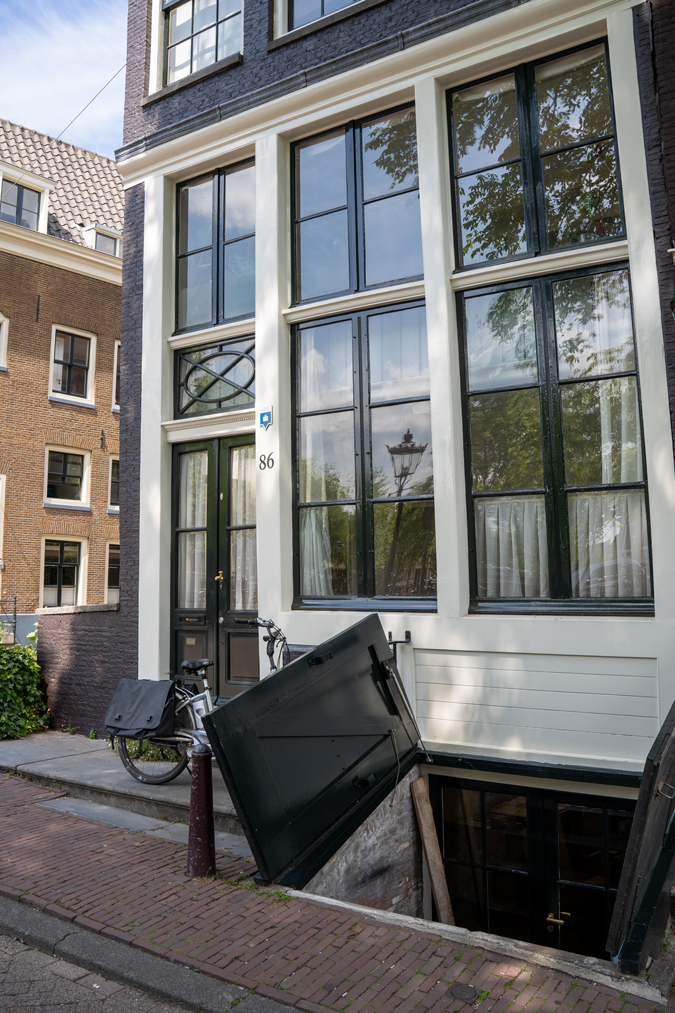 Below: We found nice steps to a house on a canal, so here is the sitting pose. 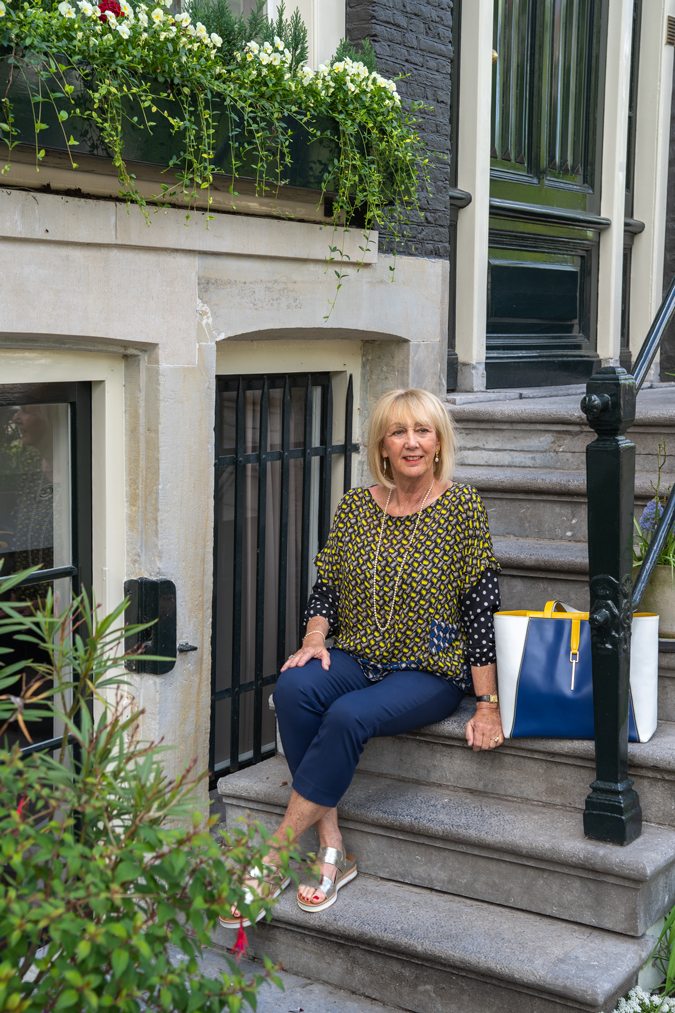 Below: I piled on the pearls. The earrings are by Lara Design (link to those earrings) and the necklace are cultivated pearls. Bought it decades ago. 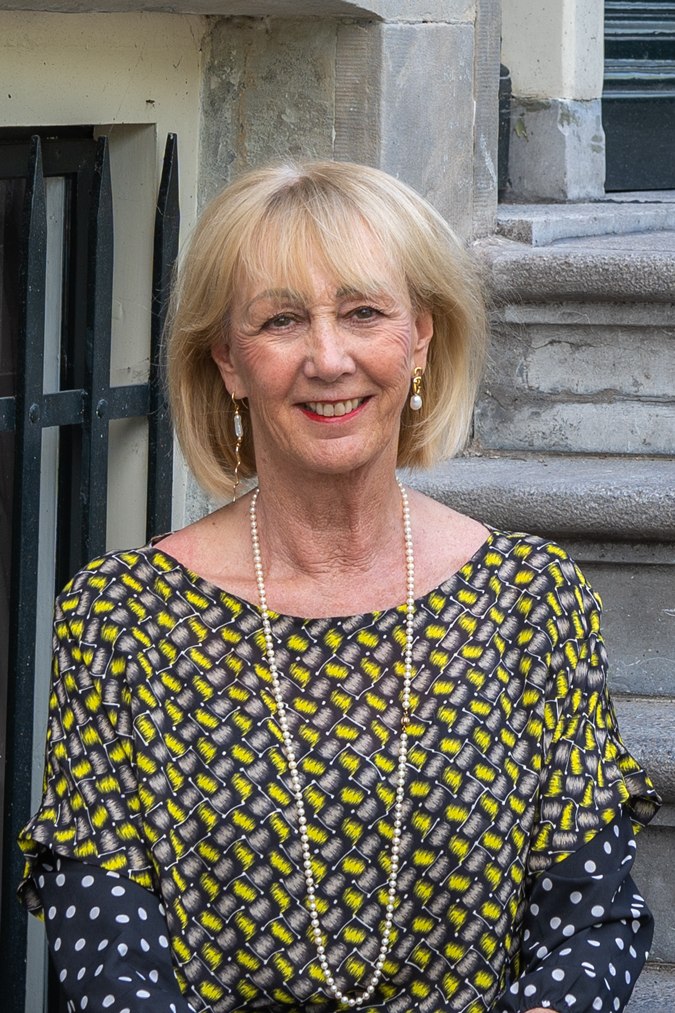 Below: For scenery reasons, a bridge across a canal. I adore the trees in Amsterdam. Without them it would be so boring. 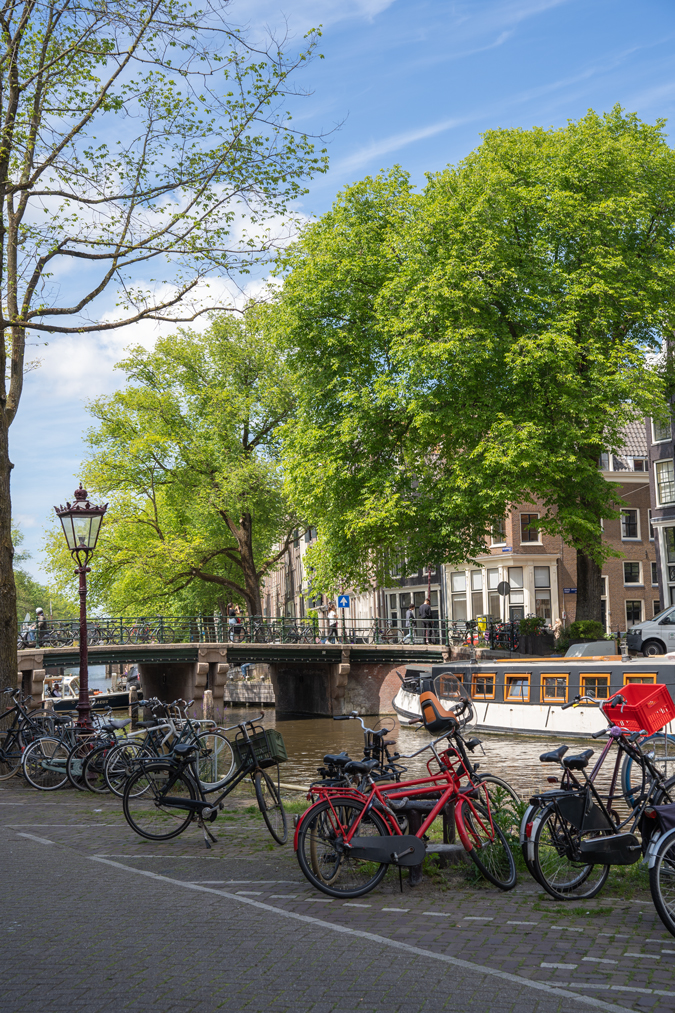 Below: Across the canal is a jetty (where all the people are standing on in the photo below). This was the jetty where my late father christened our boat, named after him in 2006. Ron sold the boat two years ago but it brought us a lot of fun. 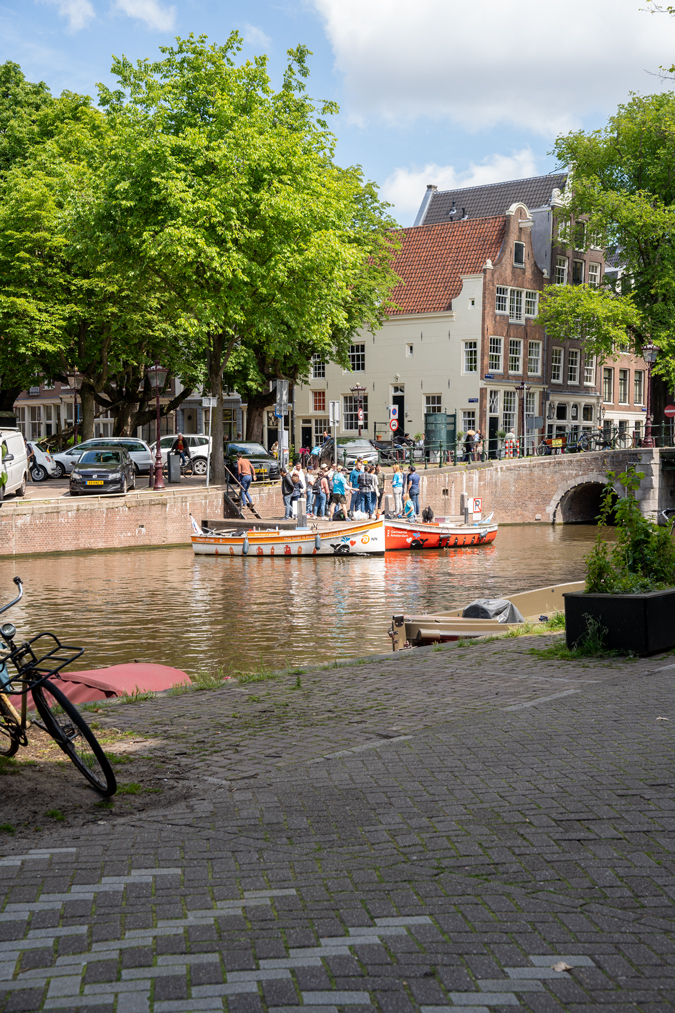 Below: This was our boat, or better said, Ron’s boat. It was called ‘t Meindert as my father’s name was Meindert. It is a photo of a photo as this was pre-digital. The water isn’t as brown as it looks on the photo.
In the yellow circle you see me with short brown hair, my father next to me and my mother next to my father. Well…’seeing’ is too strong a word haha. This was shortly after the christening of the boat on the jetty above and we moored at the jetty of café ‘t Smalle. Gosh, that was decadent….saying to the people having drinks on the jetty “Excuse me, could you please move your foot as I want to moor the boat” hahaha.

Below: Next to the house with the steps we saw this bike. I bet the people who live in those houses, have put that bike against their stairs deliberately as there are plants on this very ancient bike. They probably thought “Let’s put a fun bike here with some flowers, so other people cannot ‘park’ their bike against our house.” Clever. 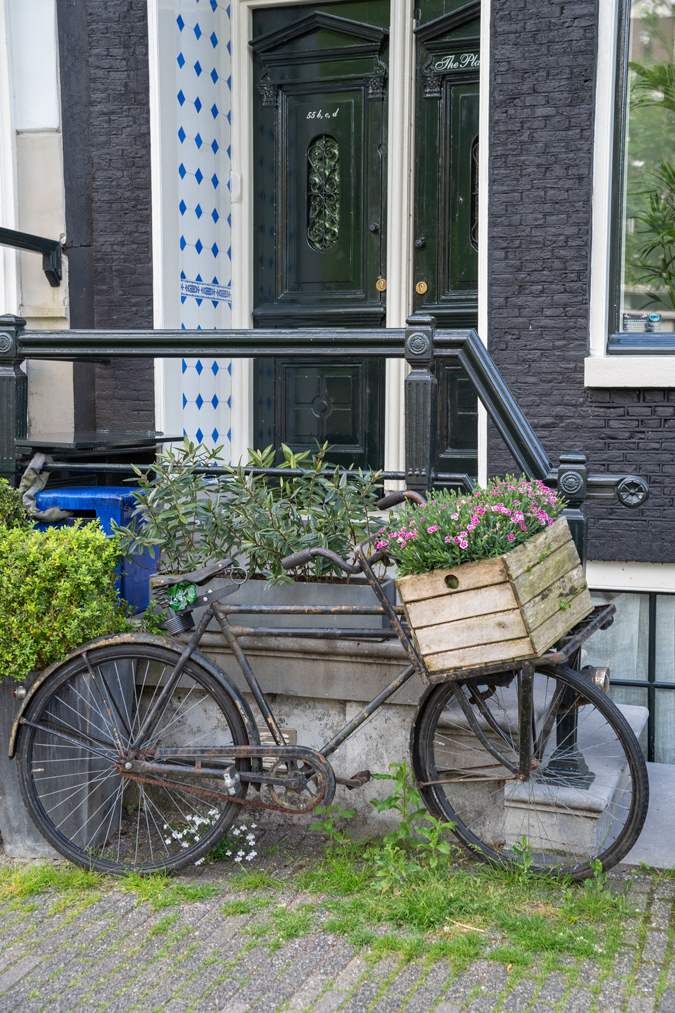 Below: We proceeded to another canal and I am posing in a strange way as I was trying to draw attention to the little pocket. Nice detail. 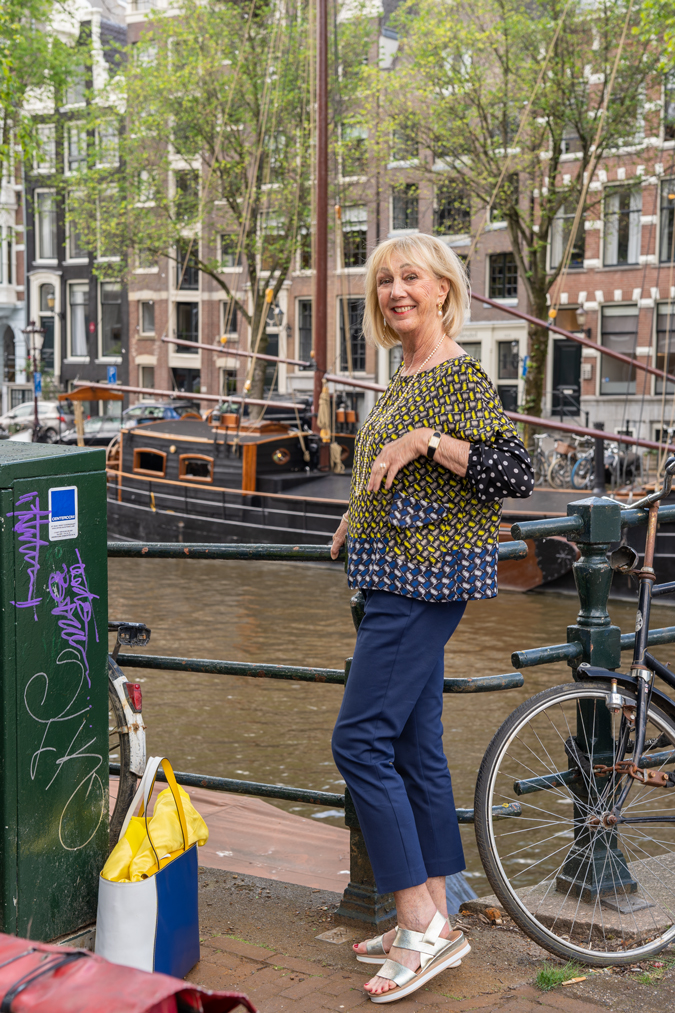 Below: I took this photo of Helena, while she was taking a photo of me. 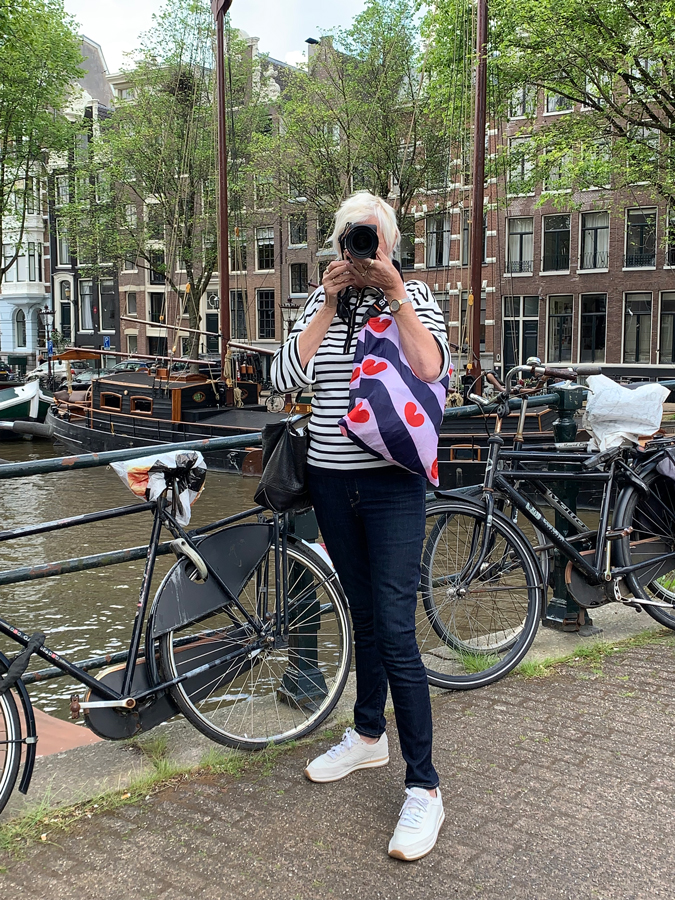 Below: A view of the canal with the big brown sailing ship in view. 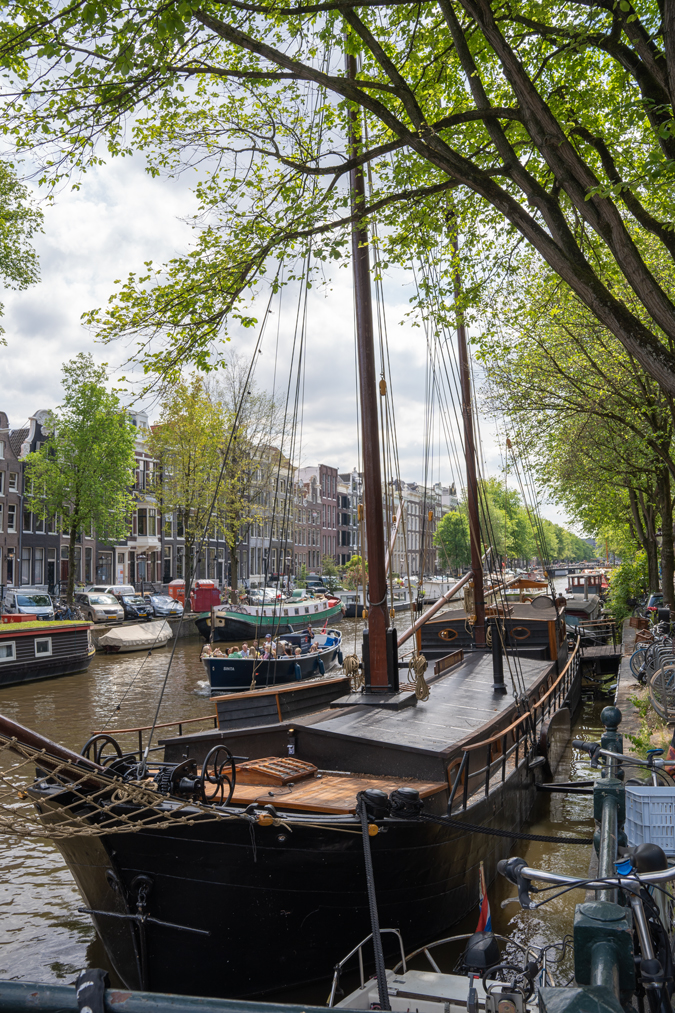 Below: The entrance to a houseboat. Pretty, I think. 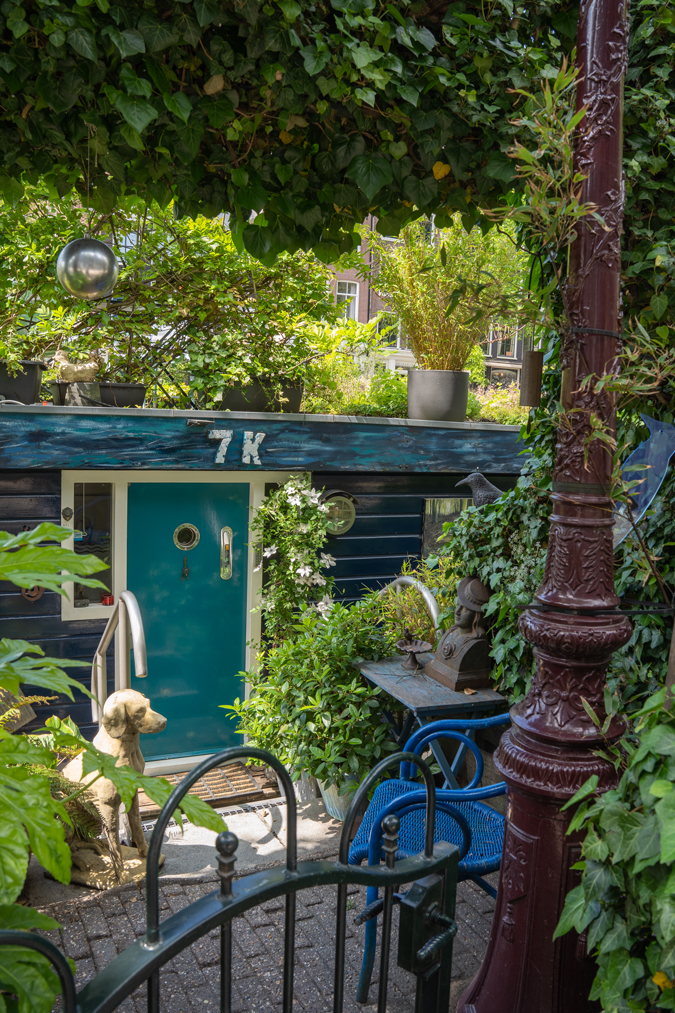 Below: OK, pretty and a good background for another photo. 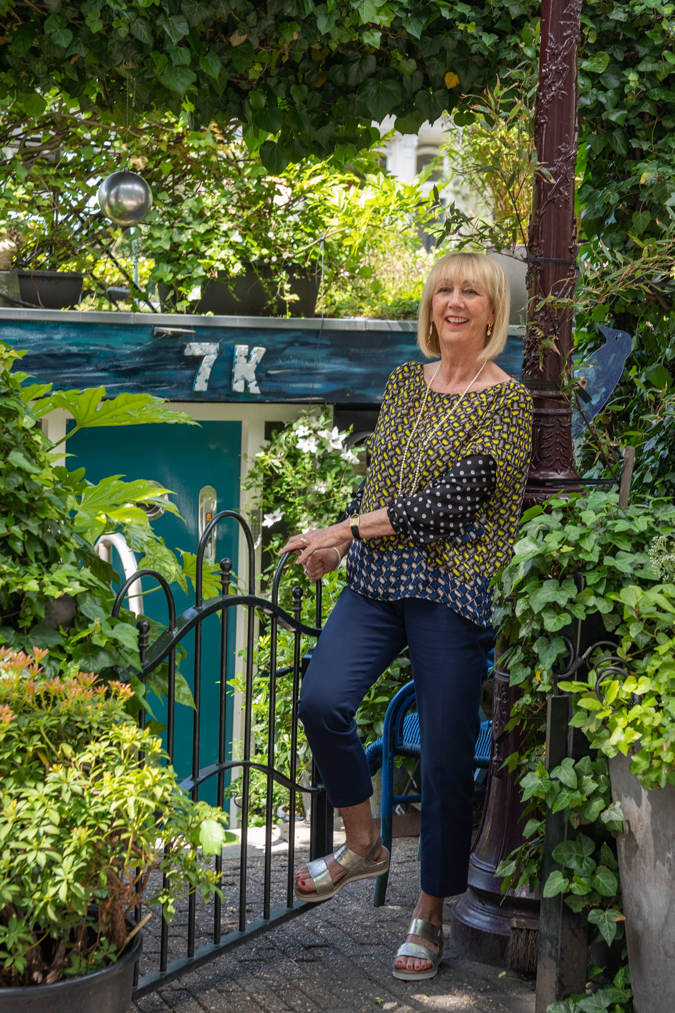 Below: As we wandered on, we came to this café and Helena told me that you are allowed to sit on that little roof. The café even put steps there to make climbing a bit easier. Still hazardous at my age but I managed. Not very elegantly I have to add. The top of the roof has a soft cushion to sit on.
There were road works going on right in front of the café with great big red and white barriers which I ‘removed’ by cropping the photo. 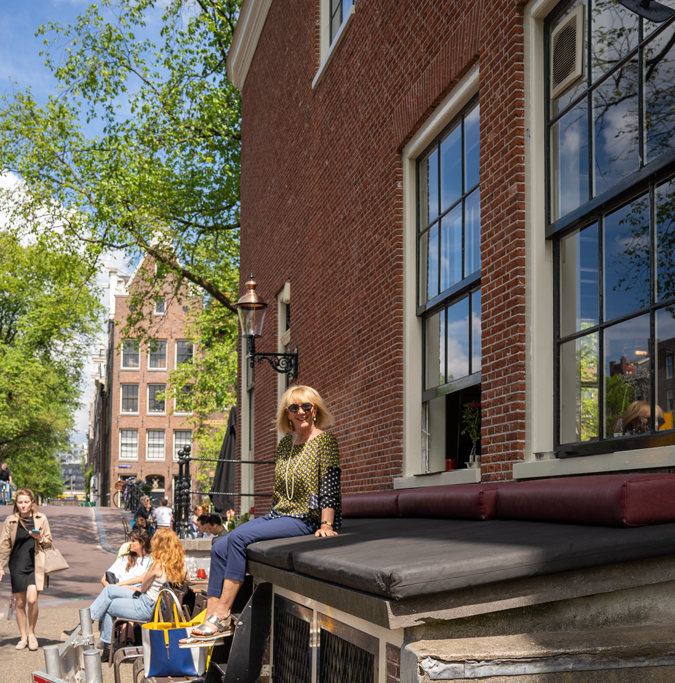 Below: As I was the only one up there, I could even sunbathe. (Oh so elegant haha.) 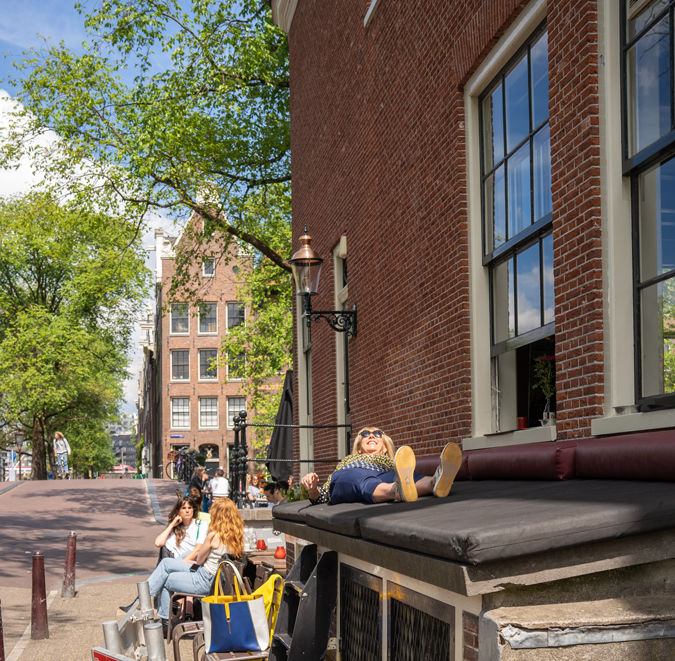 Below: Helena noticed this warning sign not to put food out. Looking at the number of pigeons, I’d say it was ignored. 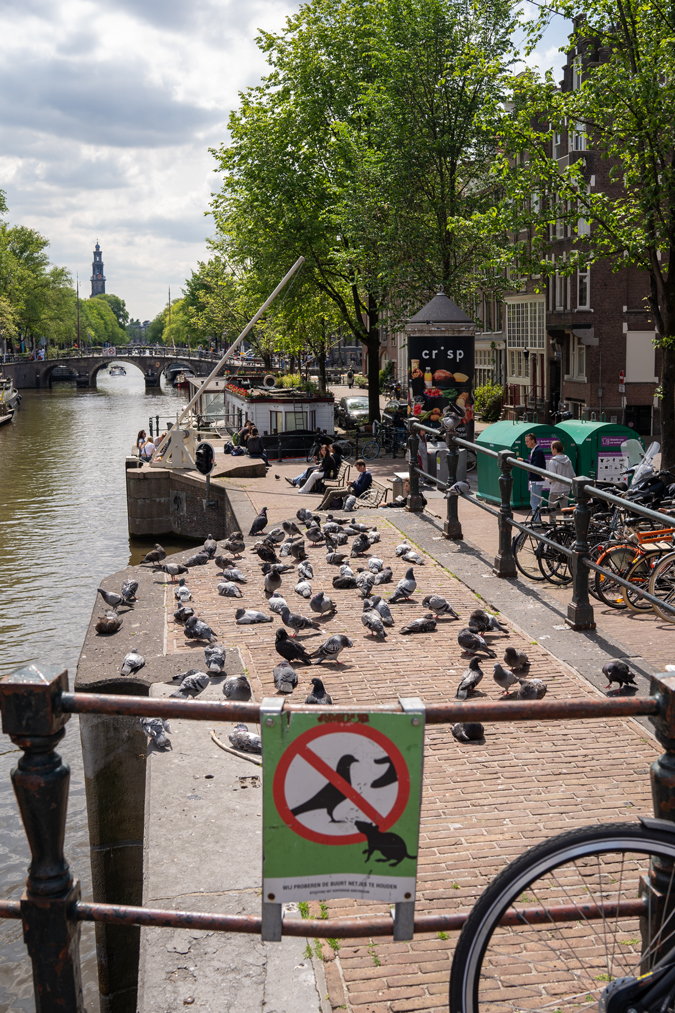 Below: Passing a pretty flower shop. The Dutch are big on flowers. 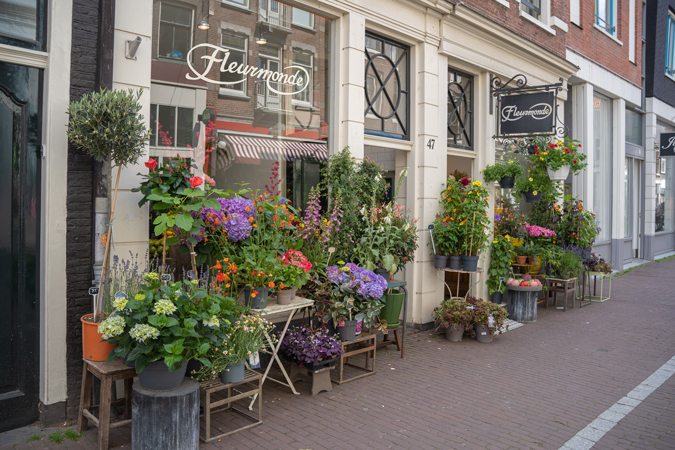 Below: Back in Haarlemmerstraat, where you will find ‘West Indisch Huis‘. In this building, the Dutch West India Company’s governors in 1625 ordered the construction of a fort on the island of Manhattan, laying the foundations for New York City. You can read more about that here. Nowadays it is a restaurant and event location, like for a wedding. 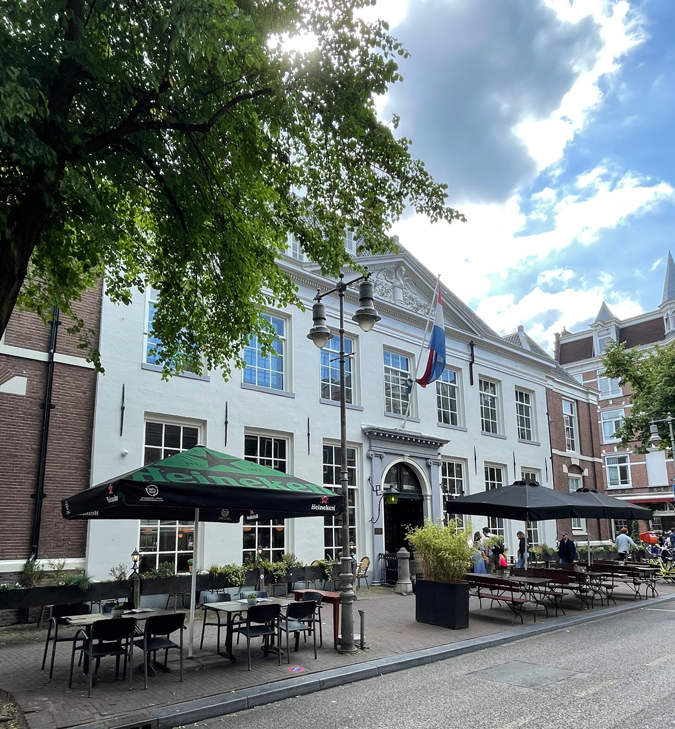 Below: Inside I would call it quirky. 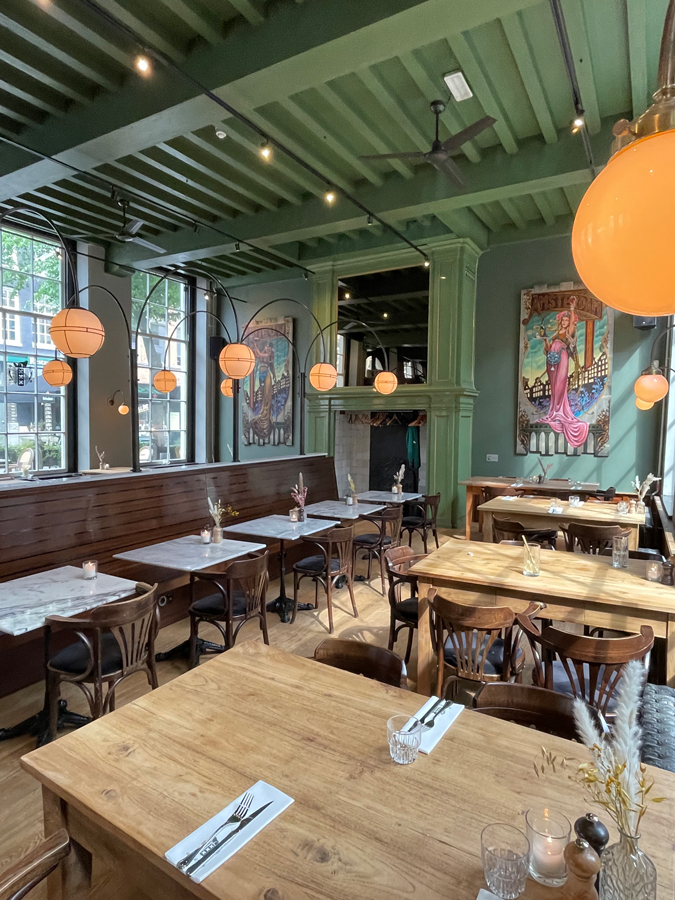 Below: It has a big courtyard at the back. 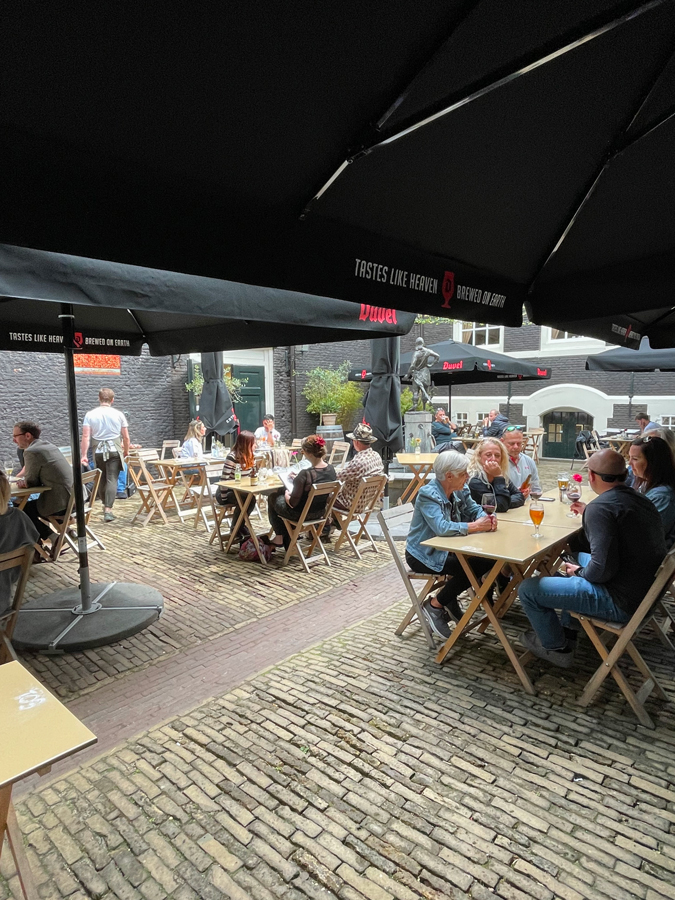 We headed back to the train station.

Below: The ‘Posthoornkerk‘. Formerly a church, now small companies reside here and you can rent it for an event. 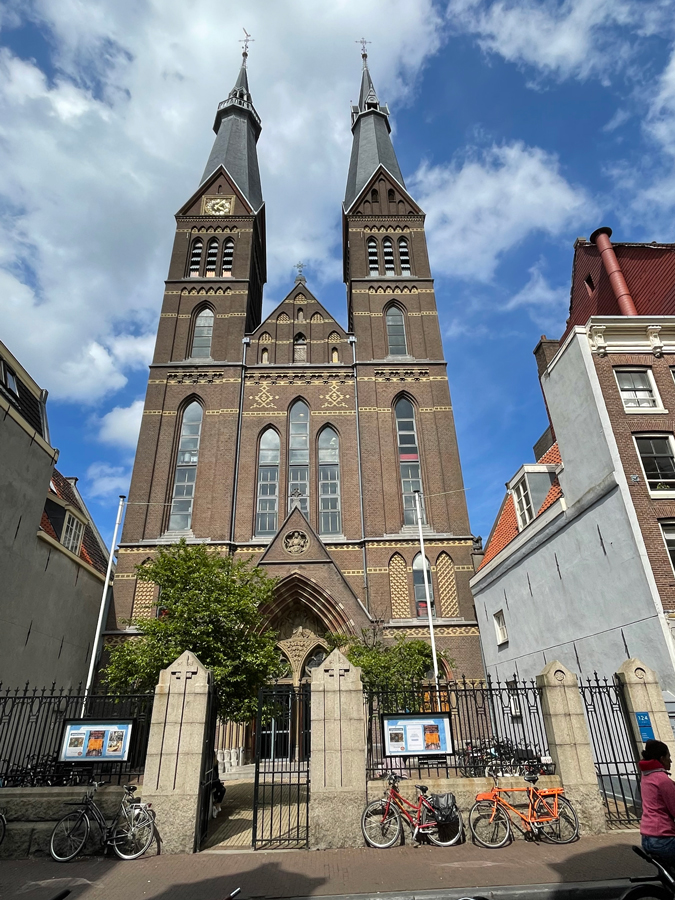 Below: As we walked to the end of Haarlemmerstraat, I suddenly saw this woman. What a beautiful woman. Love everything about her looks and her outfit. She kindly agreed to be featured on my blog. 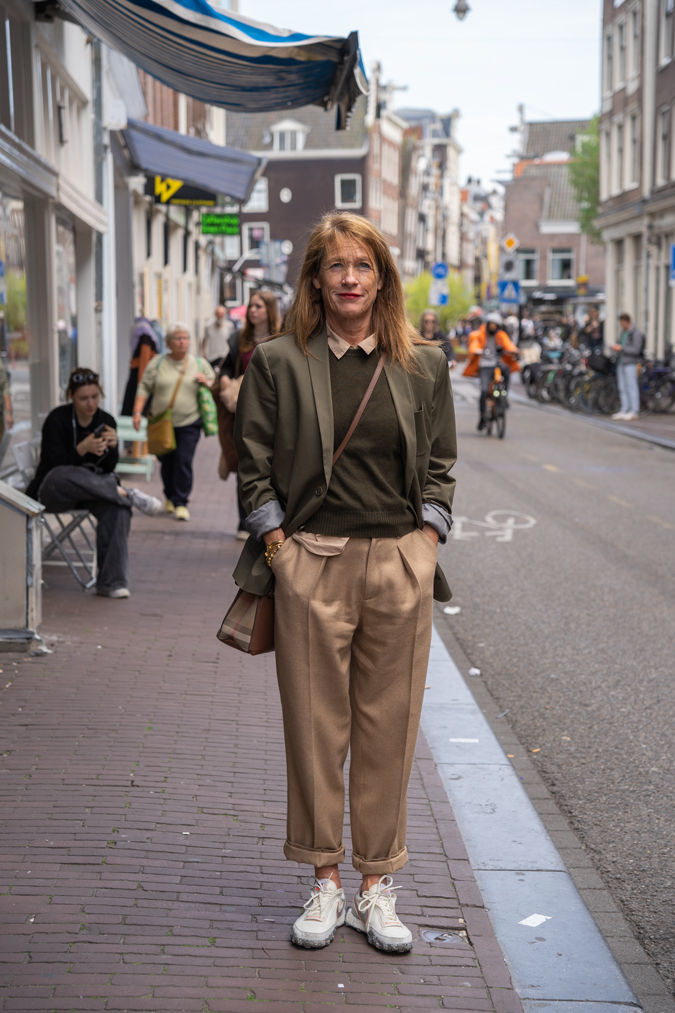 Below: One last beautiful building. This used to be a warehouse. 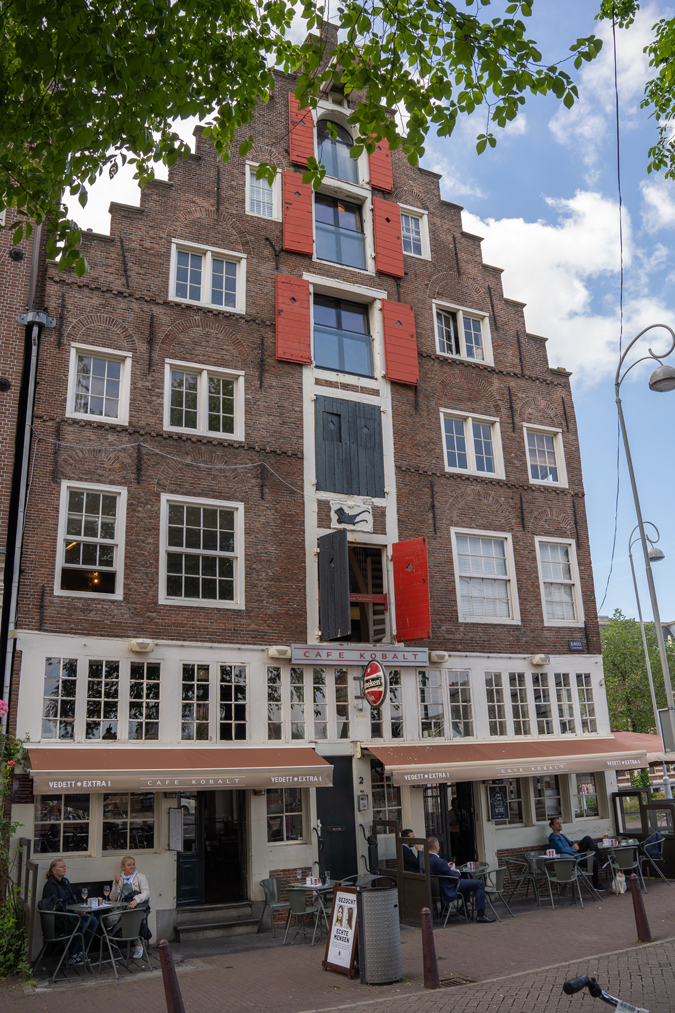 Below: Helena spotted the strange statue of the coffee bales and little coffee bean men. It wasn’t until I looked at the photo that I saw the sign ‘Look, but don’t touch please‘. SORRY.
If you are wondering what is going on and why I am making a face…a man walked straight in front of us while we were taking photos. So I made a face behind his back. Childish, I know.

I find the yellow jacket a bit too matchy matchy, especially with the blue/yellow/white tote. You can overdo things. 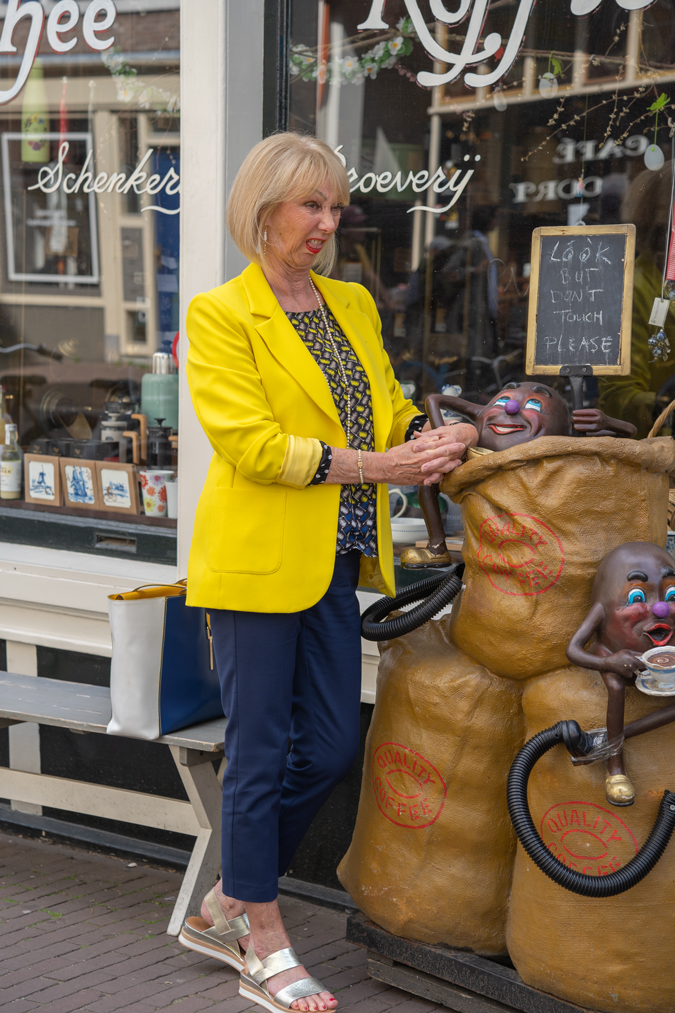 Lots of photos but we have come to the end.

What happened? I was in Spain where the temperatures were high, the food delicious, the cocktails outstanding and the prices low. I can recommend this country. We were in the neighbourhood of Alicante and stayed in an apartment near the beach.

It is incredible how much noise 5 women in one apartment make. The chatting goes on and on from when we wake up (usually around 8 a.m.) until we went to bed (usually around 1 a.m.). Quite exhausting but also sooo much fun. We have laughed so loud and so much. I have to gather all photos in high resolution and sort them out, ask permission which ones I am allowed to share with you, so it will take a while before I can create a post.

It was quite a stressful journey as we were nearly bumped off the flight when we left on Wednesday the 8th. We arrived at the airport, checked in, handed in our luggage, got our boarding passes and then the KLM lady said: “You are all on stand-by so it is not sure that you will leave. This is because the flight is overbooked. If enough passengers don’t show up, you can go”.

We froze and got into a frenzy. We rushed through the airport to the gate where the tears from Marianne in her wheelchair softened the heart of a KLM stewardess (Marianne can cry whenever necessary and we thought the situation called for it so she put on the water works). The stewardess arranged for us to be on the flight, which probably meant other people were put on stand-by. We were very early so not everybody had checked in yet.

Next obstacle was that, in our rush to get to the gate as quickly as possible, we didn’t call in the booked assistance for Marianne. However, we were on a city hopper which meant we were all loaded into a bus to go across the airfield from the main hall to the plane. And at the plane we had to go up stairs. Marianne needed the assistance and a lift. You would say a quick phone call could solve this. But the assistance desk was pissed off. Apparently there are people who book assistance just to avoid waiting at the check-in desk, never needing assistance. Luckily there was someone else on our flight for whom assistance was booked and Marianne could join. Can you imagine the stress we had?

On returning home everything went smoothly although the assistance to take Marianne to the plane, came at the last minute.

Below: We had a great time and this photo gives you some idea. Cocktails and lovely dinner by the beach. From left to right: Marijke, Marianne, me, Claudia and Jilske. Every evening (around 21.00 hrs) we went out for dinner and dressed to the nines. Finally we had the opportunity again. 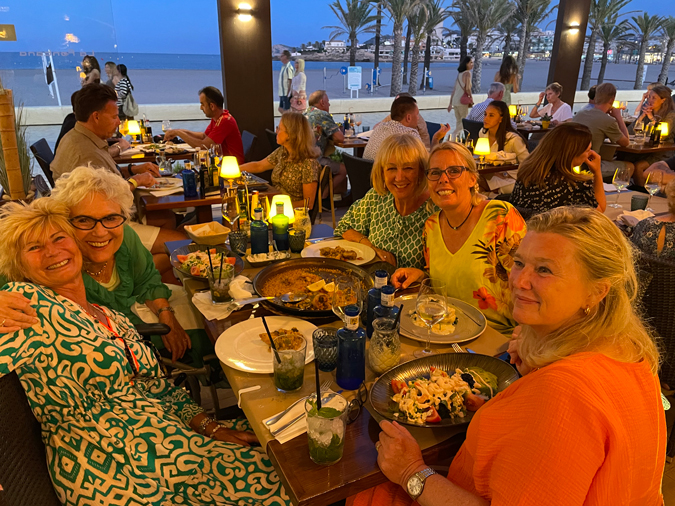 Below: I stayed out of the sun as much as possible as I burn easily. With this ‘charming’ picture as a result haha. 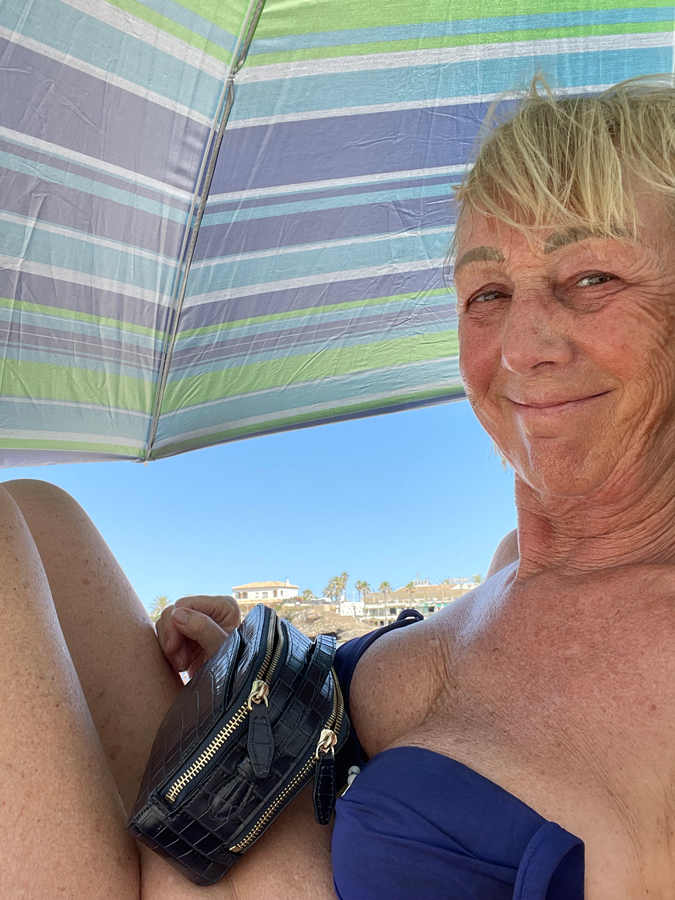 Below: Sometimes they’d wrapped me up, making me look like a mermaid.

I also shared these two photos below on Instagram as a collage next to each other. It got more likes than a lovely outfit post. People want to see reality and not fake.

Below: The fake pose. Meaning, I am posing, pulling my shoulders back instead of slouching and I am holding my tummy in. 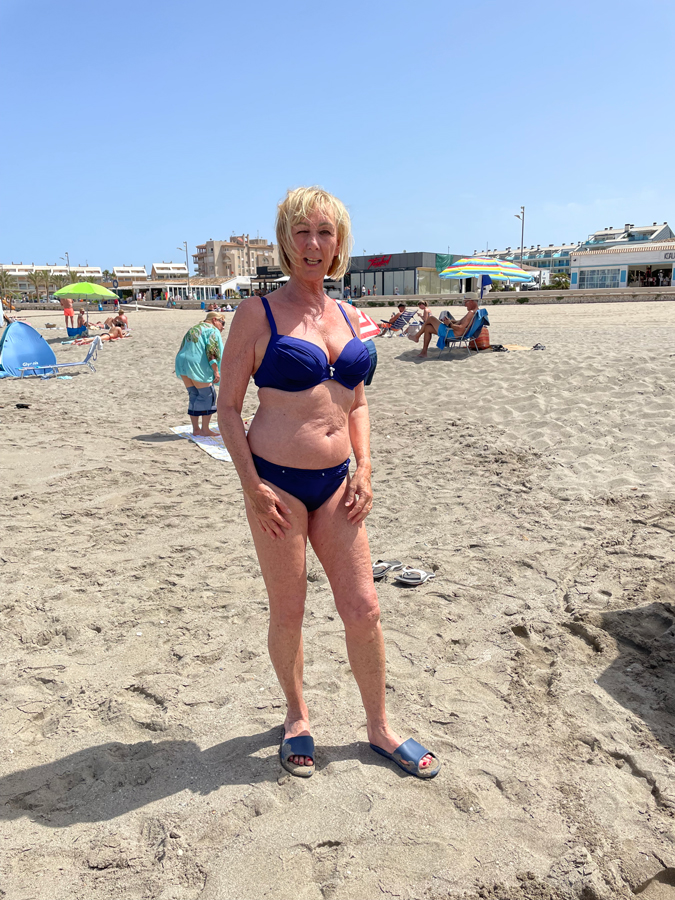 Below: The reality, slouching, tummy sticking out. And how about this hairstyle whahaha? The awful slippers are necessary to avoid burning your feet on the hot sand. They were cheap and I threw them out when we returned. Not very sustainable but better than blisters on the soles of my feet. 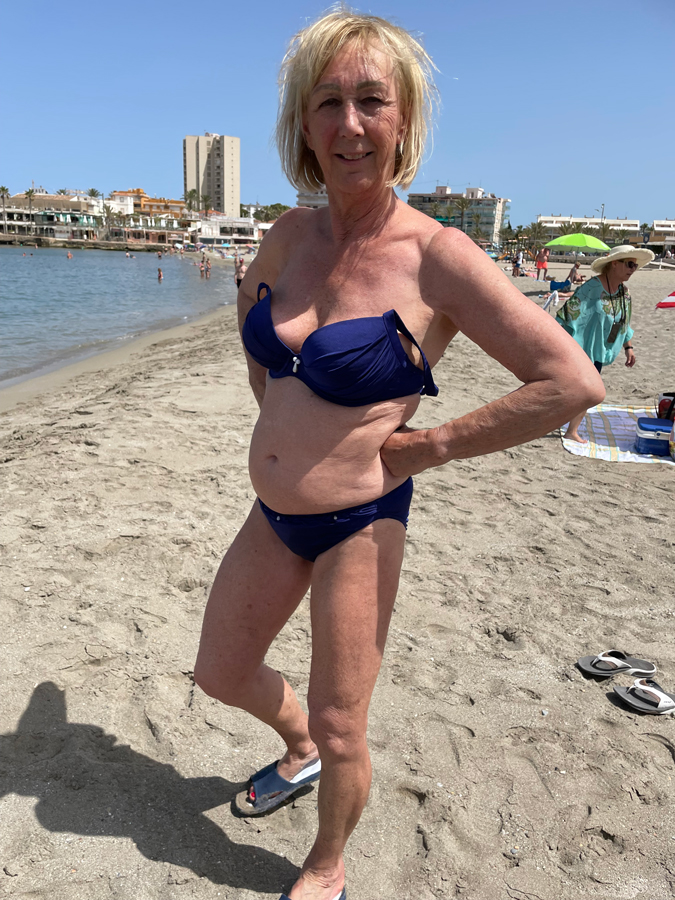 After I returned home it was all laundry, ironing and stuff like that. I am showing Ron what I have bought one thing at the time (of course I bought clothes and shoes, what do you think?). He disapproves of two out of three, but that is his bad luck. I like everything.

Friday I visited mum. She had to do without my daily phone calls for a week and without my Sunday visit. Though during my holiday my brother visited her on Saturday and Ron took her to the hospital on Tuesday for the operation check-up. The operation result is good and mum has hardly any pain now. The wound on her heel is still much the same but the surgeon is confident it will heal. It would be too soon to expect results in two weeks. The future is looking brightly and so is she (below). 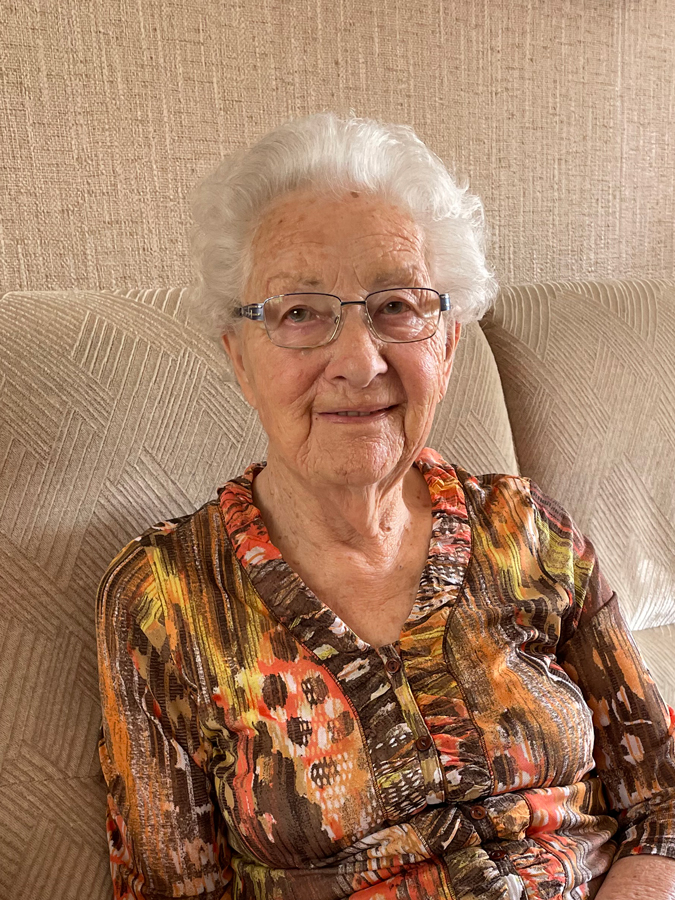 Again, no video this week. I am too busy.