A winter white dress and a visit to Michou 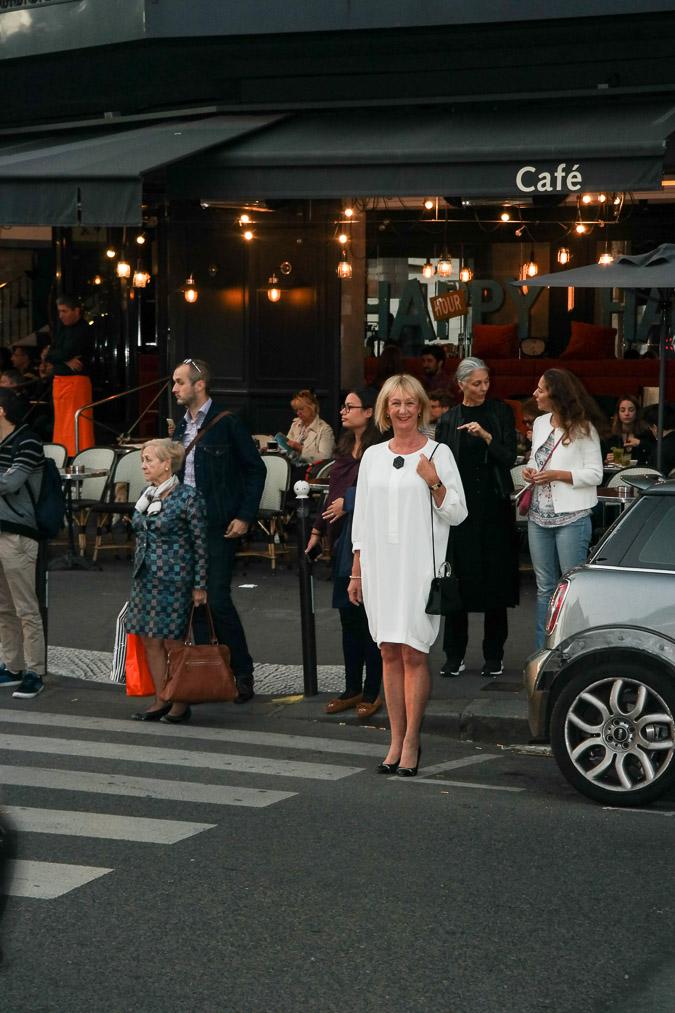 Here I am in Paris, wearing a dress from my shopping spree in August at the Max Mara outlet. At the time I kept insisting that this was a summer dress. Both Daniela and the sales assistant told me it was a winter white dress. Being pigheaded, I put it on the next day (… in August in Italy…). And instantly took it off again. Indeed a winter dress. (It looks very good with green fantasy tights and green boots. You will see that futher down this post.

Now first for this Paris styling. As you see above, I wore the same shoes and bag as with my striped dress. After all, my suitcase was already ridiculously heavy. One pair of high heels for 3 dinners should suffice. The dress looks a bit like a nighty. I seem to be taking a fancy to nightie-like dresses. Being white makes that comparison even more obvious. When I wore it to the office, two of my colleagues were about to say “it looks like a nightie”, but they bit their tongue haha. On the other hand, when I wore this in Paris, I got several compliments (from women) who said I looked so elegant. And Parisian women know their stuff. Big advantage of the dress: it doesn’t crease.

Unfortunately all pictures are not sharp. This due to the fact that night was falling and the lens we used needed much more light. Well darlings, it is what it is. Cannot do it again.

Below: from this terrace on the Boulevard Saint-Germain we watched the people passing by. As you can see, there was a zebra crossing right in front of us… 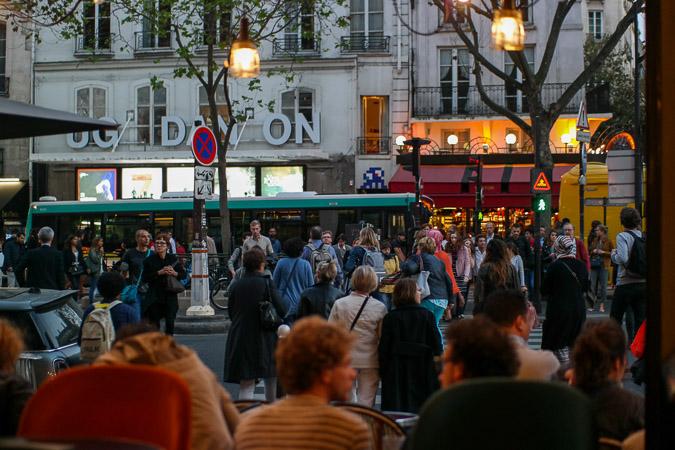 … which gave Ron the idea of photographing me while I was crossing the zebra.

Below: “Hang on darling. First I have to fiddle with my bag.” 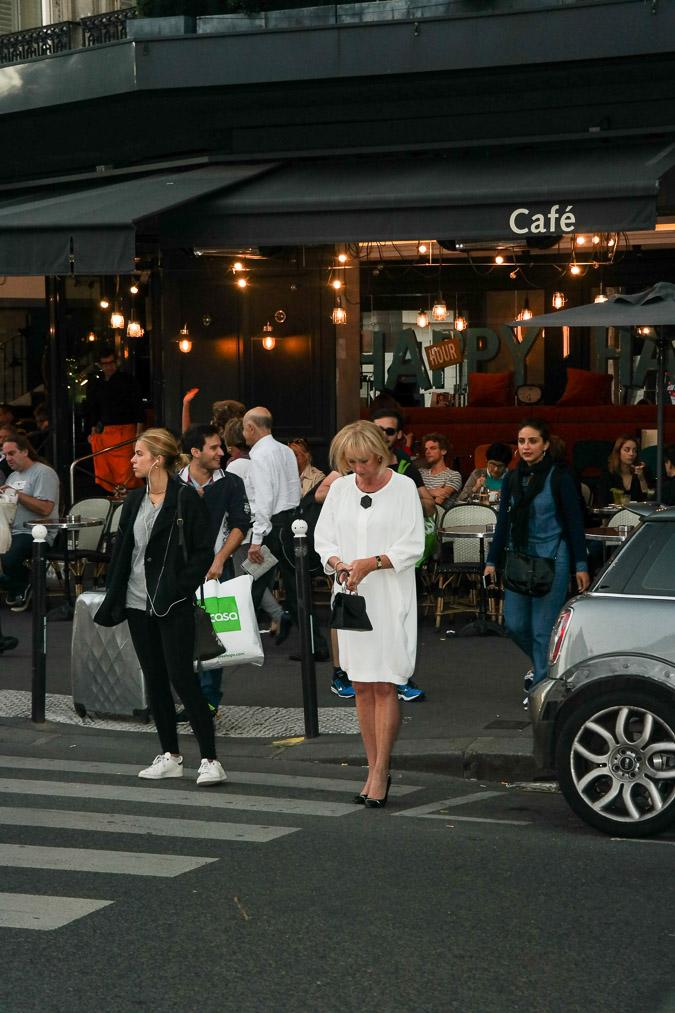 Below: “this thing doesn’t want to close”. 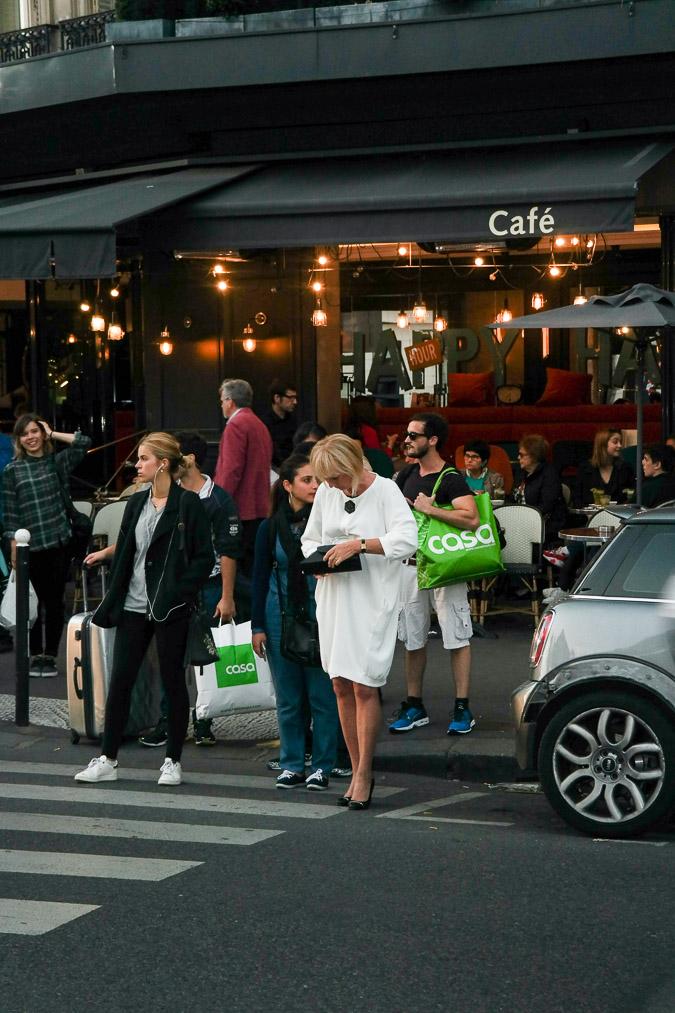 Below: waiting for the light to go green. While being given the once-over by the woman on my right (only saw that when I was selecting the photos). 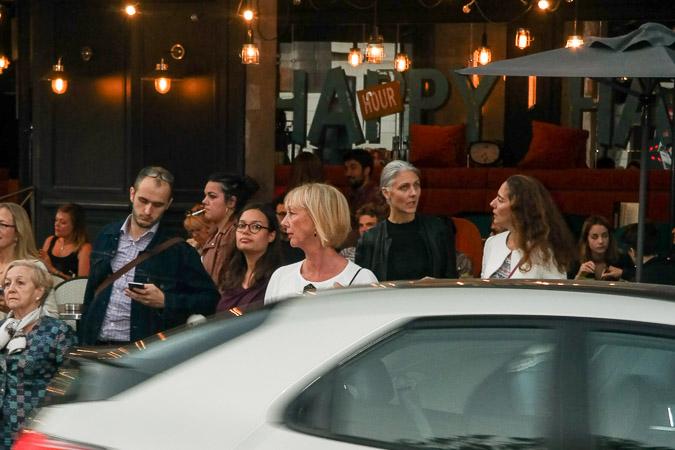 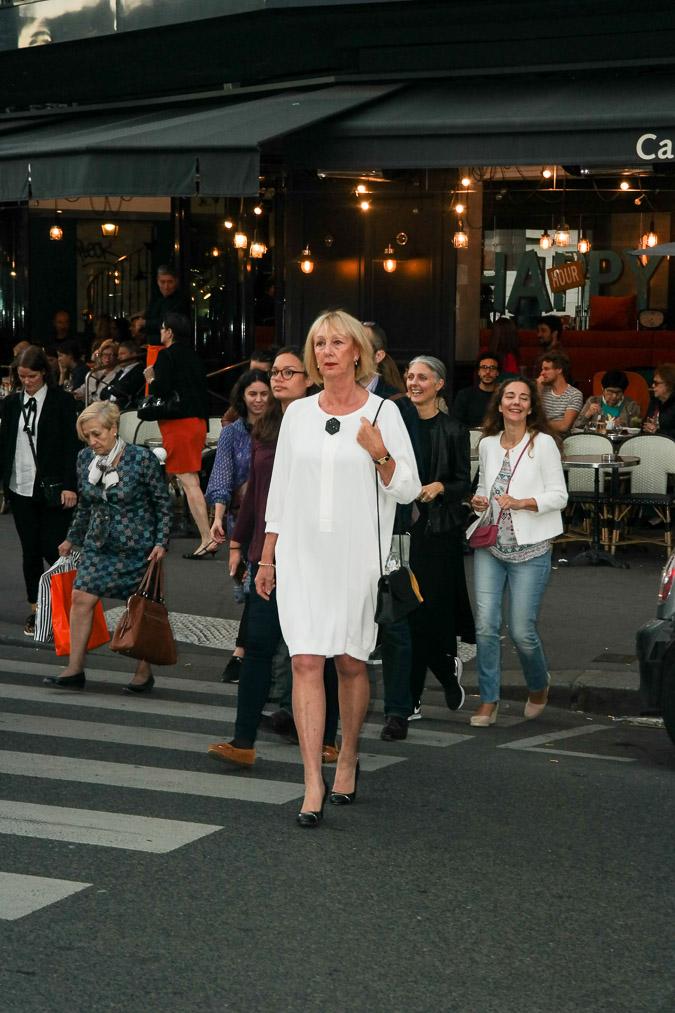 Below: no…. that was not the end of it. I crossed that zebra about 5 times by Ron’s request and it kept getting darker and darker. 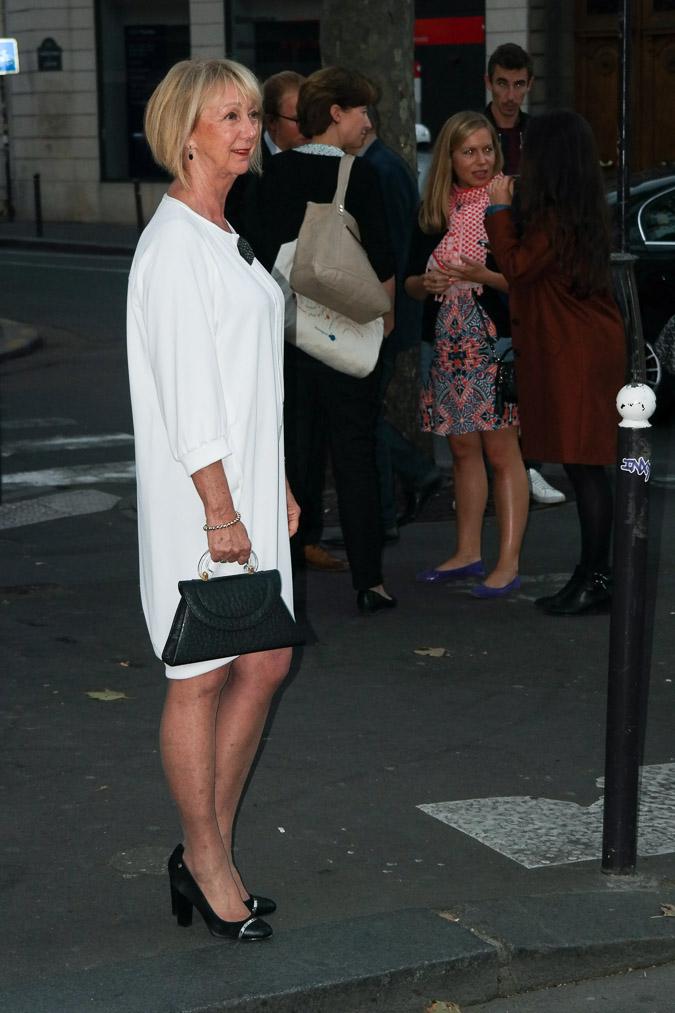 Below: close-up of the bag (the shoes could use some polishing). 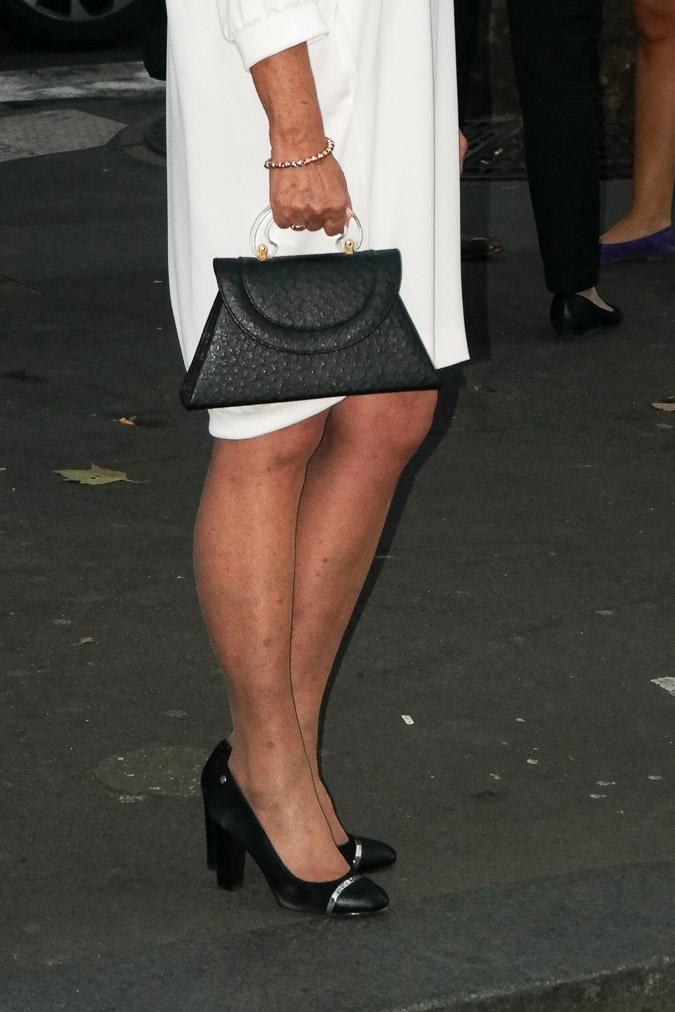 Below: close-up of the brooch which I also bought at the Max Mara outlet. I needed something heavy to keep the dress hanging right and not fall to the back. 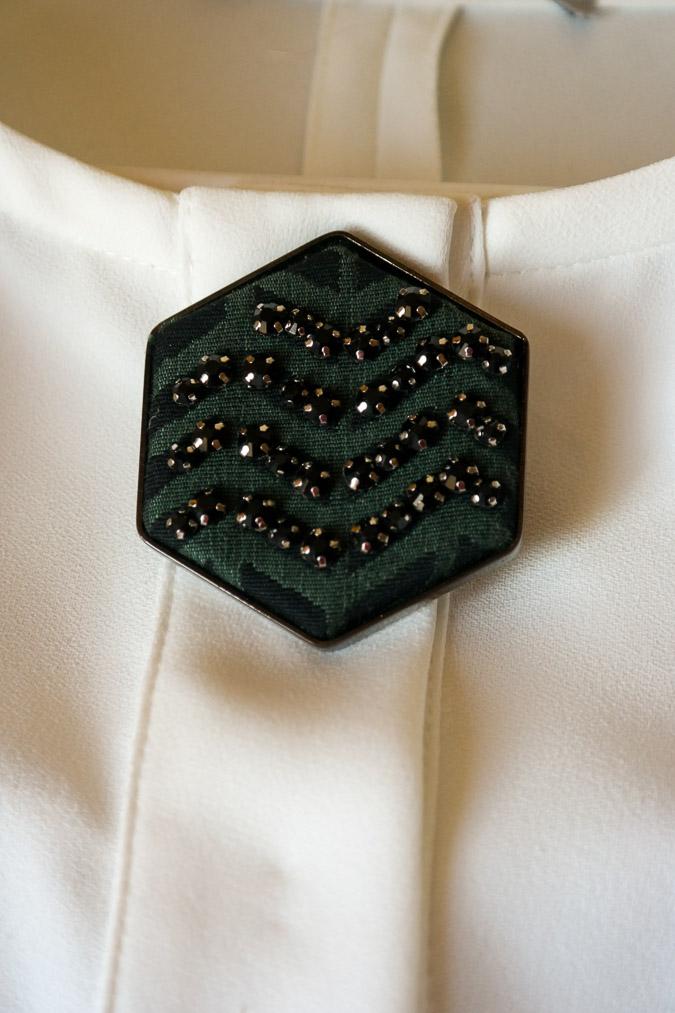 Below: a pina colada before we went to dinner. 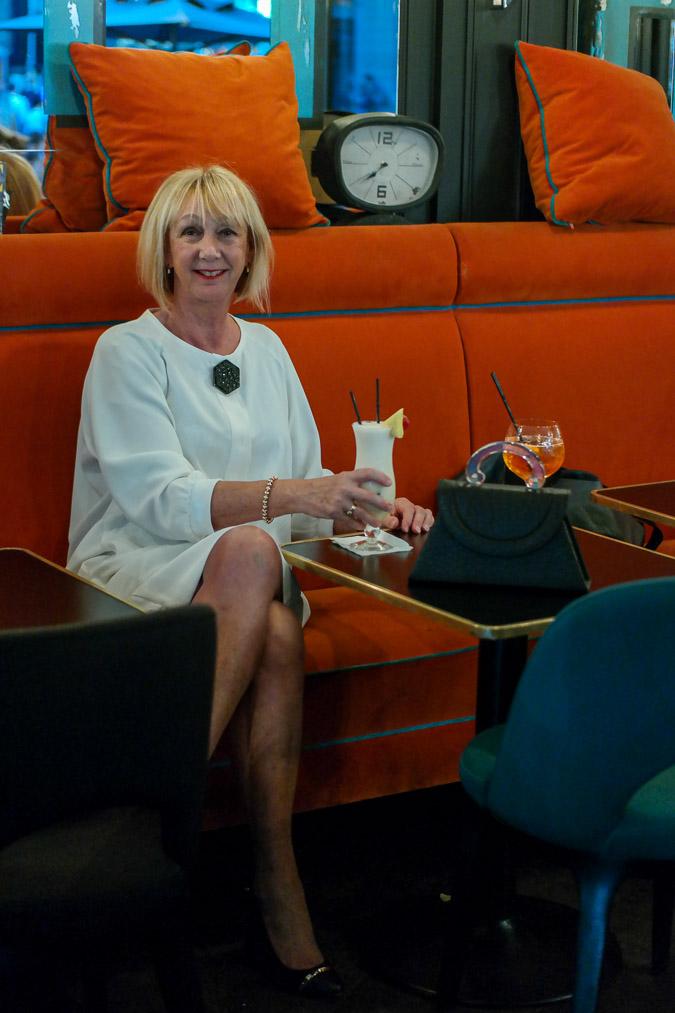 We went to dinner at Michou. Which is a drag queen show. Totally in French. We opted for dinner and show, but you can also visit just the show which starts at 22.30. Remember I said last week we knew it was going to get late that night? A quarter to one we stepped outside. That is late for me. I am not a night owl.

Dinner wasn’t to write home about, but the atmosphere made up for that. Three waiters were also performers and already had their make-up on. They were ever so nice.

Below: as we came in, we were seated on either side of Michou himself to have our picture taken with him. 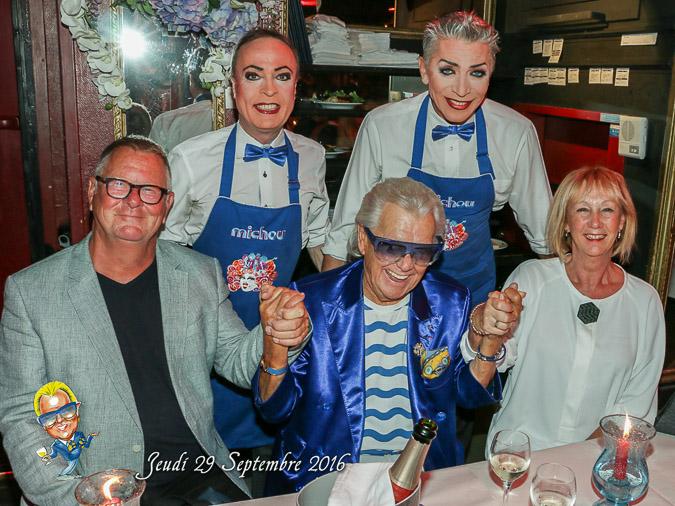 We thought it was so funny. Michou himself is nearly 85 but still climbs the stage for an introduction speech. Supported (literally) by two performers as he is not very steady on his legs anymore. The age of Michou and the not so young performers just added to the fun atmosphere.

But boy oh boy were those performers GOOD. There were six of them and all terrific. They playbacked and sang old songs, some French, some English, we knew them all. And they made jokes. It was the best cabaret. When one of them really gave a cabaret performance in French it was just too bad we couldn’t understand it. (We speak French but not well enough for a quick conversation.) The rest of the guests were in stitches.

Below: our photo was also taken at dinner. Of course you pay for those photos. I asked whether I could receive them digitally as well. Normally they would charge you for that, but because I asked so nicely, I got them for free. 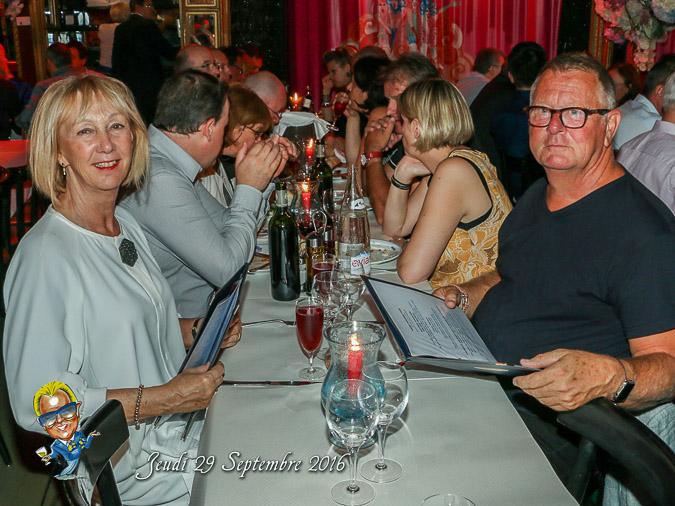 We were not allowed to take any pictures of the show itself. Below the only three atmosphere pictures I took with my mobile phone. Horrible, but they are all I’ve got. Lots of red light.

To make up for that, here is a link to some of the performers in the show. You will recognise Celine Dion (spitting image). 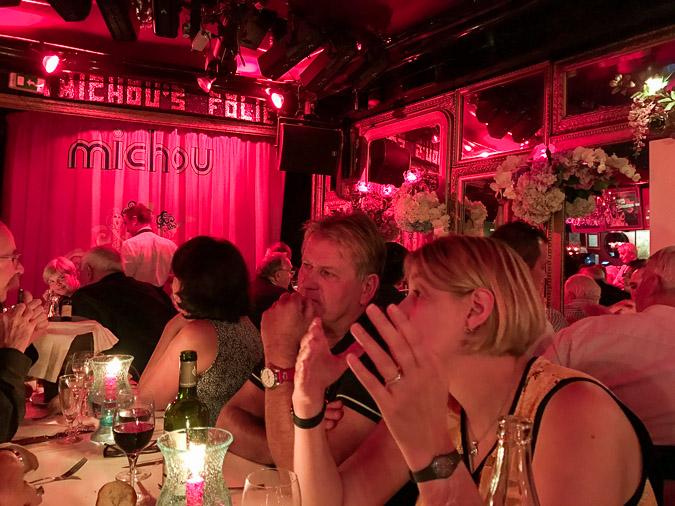 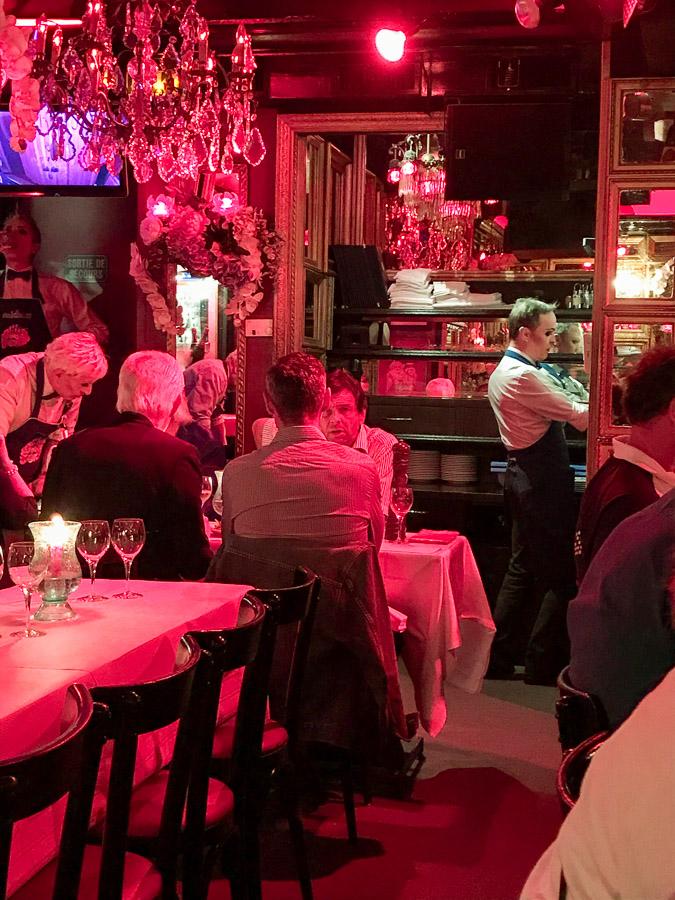 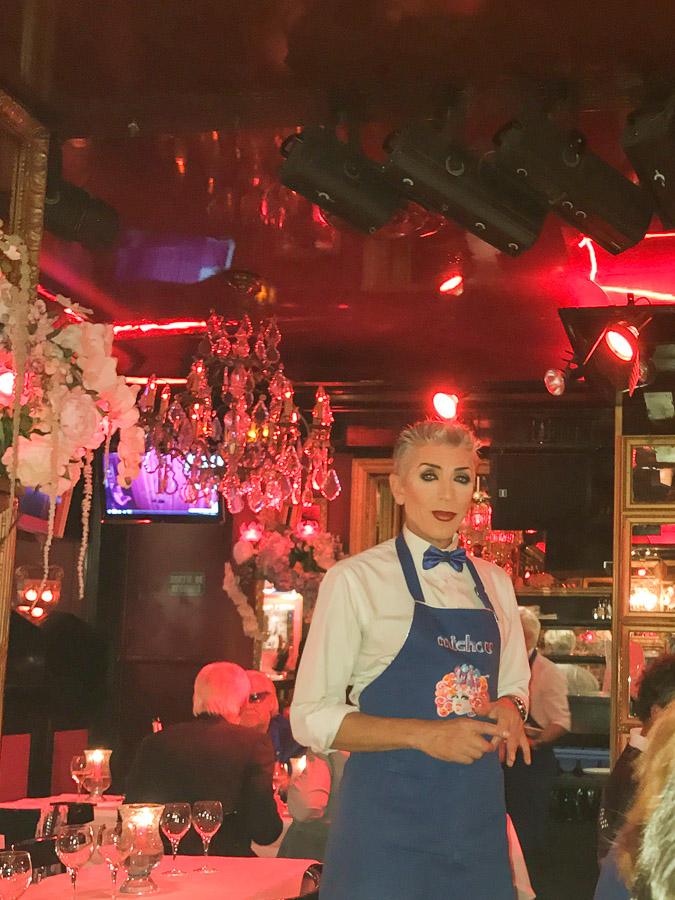 Back to the dress.

Below as promised, the dress styled with green fantasy tights and green boots. Taken with my iPhone at the office. 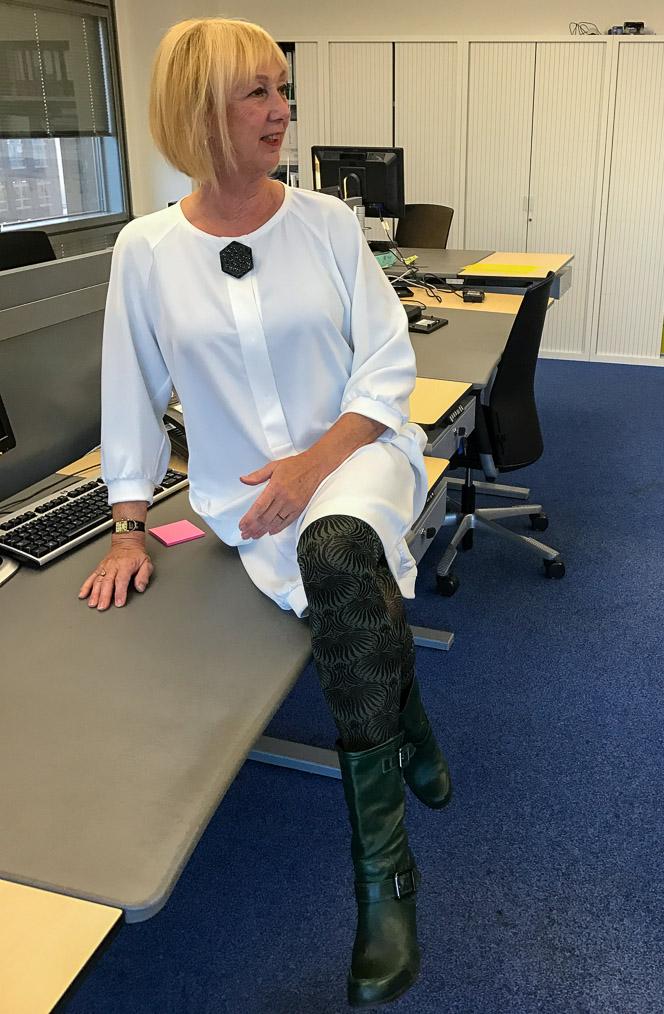 Next week the last of my Paris adventures. And the week after another issue of Shopping Saturday with Sabine and Anke. This time in Eindhoven where the Dutch Design Week had started that day.