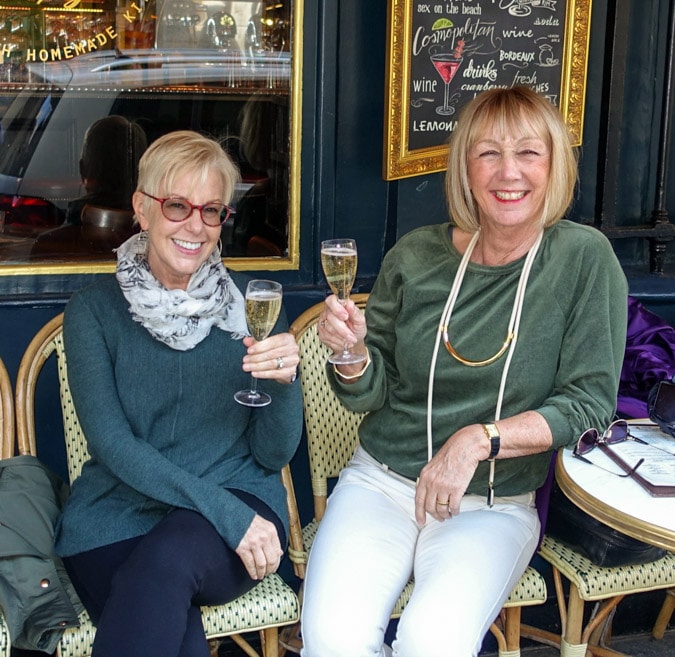 Trust me, there are days and weeks when nothing exciting happens. Just work, eating and sleeping. September and October though, were crazy months with lots of trips. As you know, Ron and I went to Maastricht for two days as we couldn’t go to Paris. A month later I went on a citytrip to Paris to meet Susan of Une Femme d’un certain âge. Our first encounter was two years ago when she visited Amsterdam with her husband. And we met in Paris last year as well. It is beginning to be a yearly event. Which I like as it is always nice meeting her.

Above: We couldn’t decide what to drink and the waitress suggested champaign. “Why not?” we said. “Then let’s say it is your birthday”, she continued. “Happy Birthday!!” Which made us laugh. Two glasses each later I was really giggly as I hardly ever drink and tipped the waitress generously. She deserved it though. We had nice champaign (actually cava, which is from Spain or Catalonia. Let’s distinguish the difference now they have declared independence). We had nuts, she made a photo of the two of us and made us laugh.

Below: Shopping in Paris this time meant drooling for me and trying not to spend. Maastricht left a hole in my money pocket. But these sunglasses were very nicely priced and very “au courant”. So that was my little flaw in Paris. Susan also bought hers in this picture (photo courtesy of the shop manager of Jimmy Fairly). 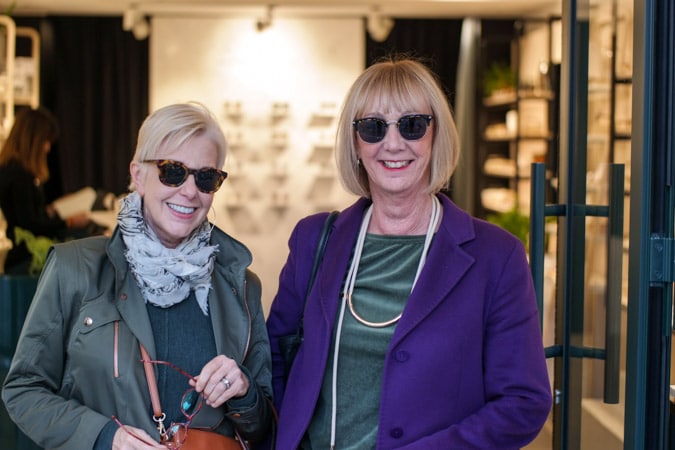 Of course we took pictures of our outfits for our blogs. It was beautiful weather that Friday.

Below: Bokeh (= blurry background).. YES. Thank you Catherine for the camera lessons. Susan always buys good quality clothes and knows what suits her and what not. She is a pro with scarves. The yellow bag gives a pop of colour. 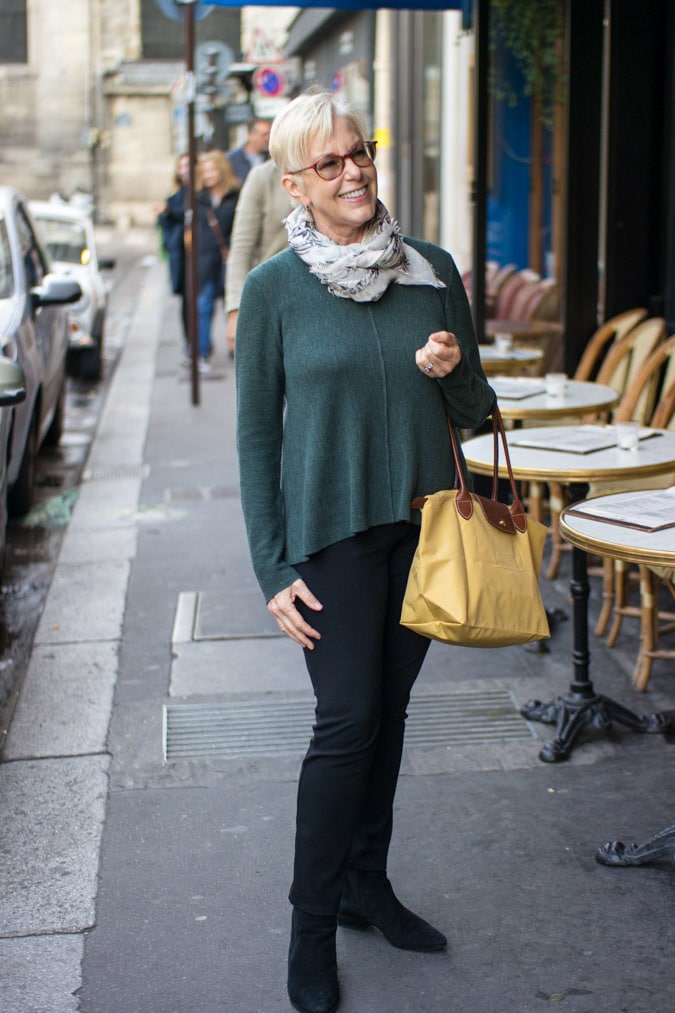 Below: Yah, new sunglasses. And my new necklace. And a new grey/green velvet sweater from Young Designers United. Such a good shop in Amsterdam. I really wanted to buy red and green items now that they are finally in fashion in the shades I like. The Maastricht purchases however, were expensive black and white items. Not clever. Recognize the EIJK shoes? Yes, you can shop on them all day. 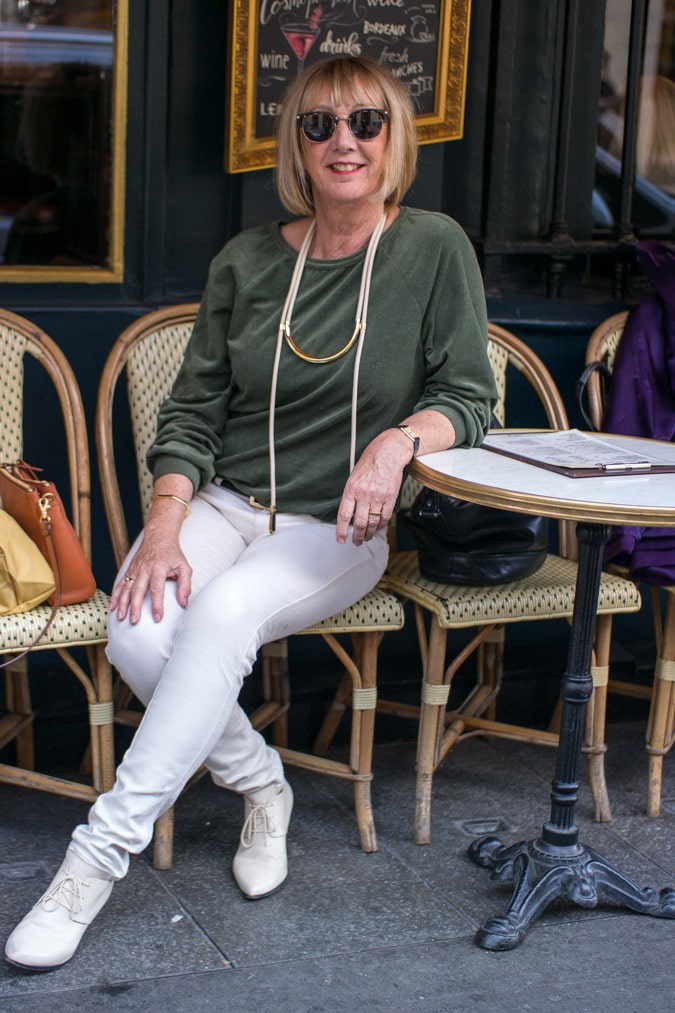 Below: We did some more shopping and I was soooo tempted in the shop of Tara Jarmon. This coat was € 750 in the shop and even more expensive online (how strange). That price was too high and my money level was too low. Just a picture of it. Coat stayed in the shop. 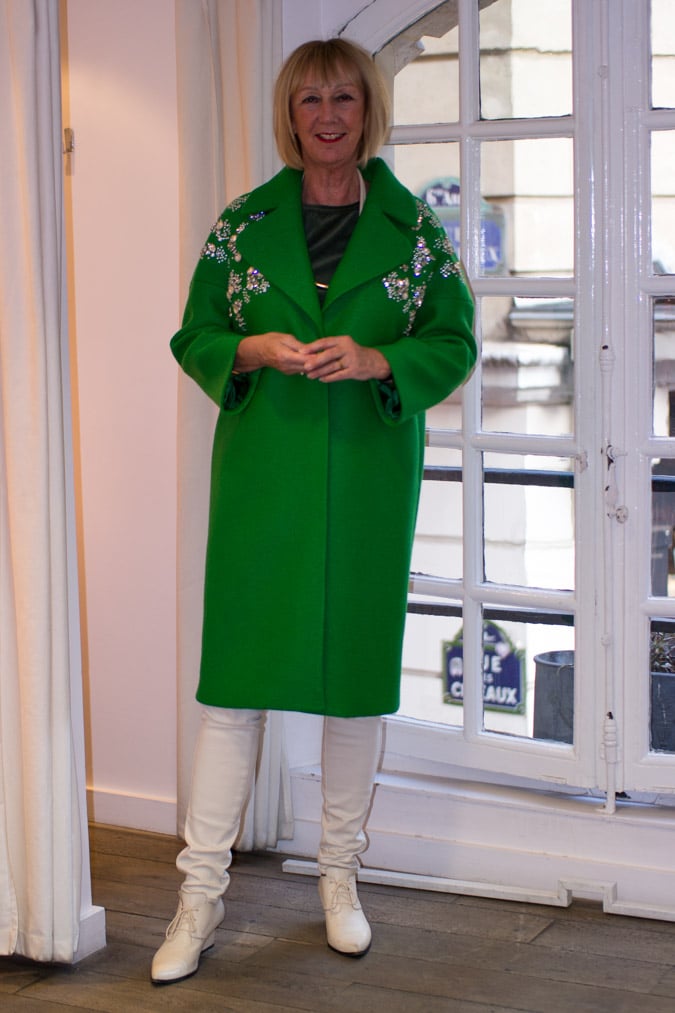 In the evening we ate Moules et frites (mussels and French fries), a typical Belgian delight which Susan craved for.

Below: An espresso in a bar afterwards kept Susan up half the night. Nice coffee but not a clever thing to do. 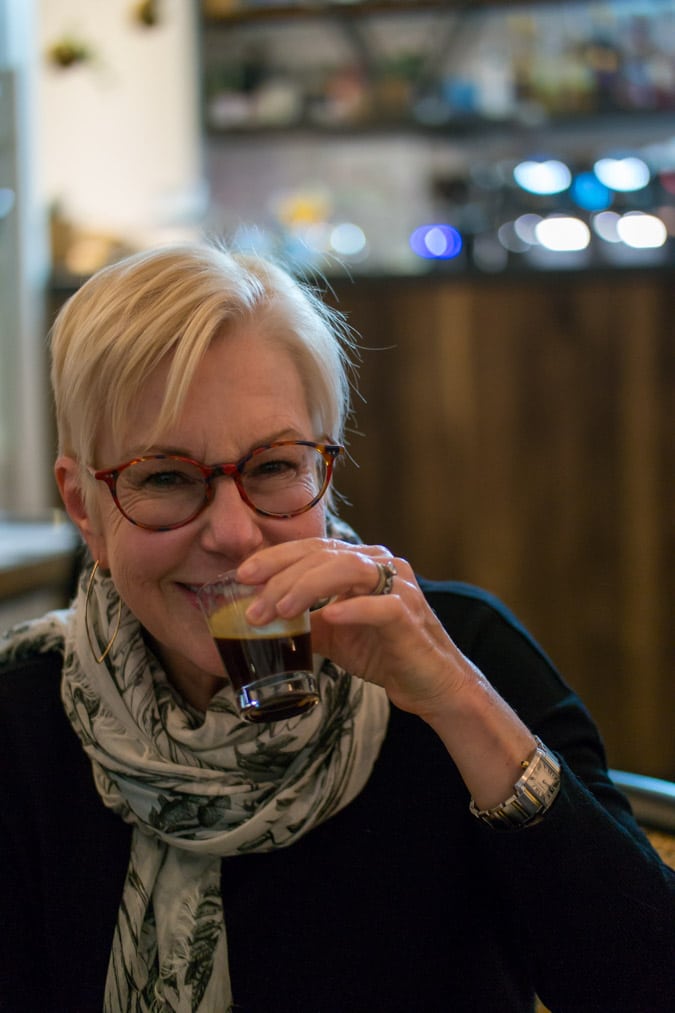 For those who speak a little French, a funny story. In the bar where we had our espresso, was a lady with a white long-haired dog. I started a little conversation with the dog owner. Once we were outside Susan asked me what the lady had said. I replied: “No idea. My French isn’t that good. Something about the “derrière” of the dog being from Tibet.” Susan started laughing: “No silly, it is a Tibetan terrier”. That killed us laughing for a minute or two. Laughing out loud with a friend… it doesn’t get much better.

Below: The next day the sky was cloudy but we started without rain. I arranged for Jeanne to meet us at Susan’s hotel before heading to Café Les Deux Magots, 6 Place Saint-Germain des Prés. I know Jeanne (who is French and not only because she wears a beret so well) through blogging. Whenever I am in Paris, I try to see her, even if only for an hour or so. Susan is the kind of woman “the more the merrier” and agreed. See the difference in height between Susan and me? 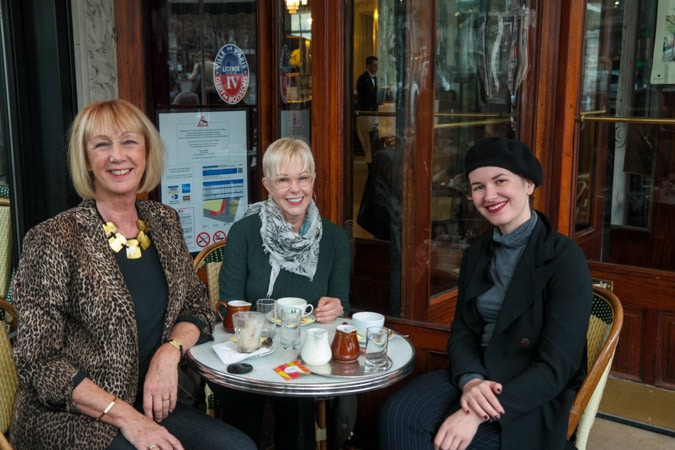 Below: The interior of Les Deux Magots. 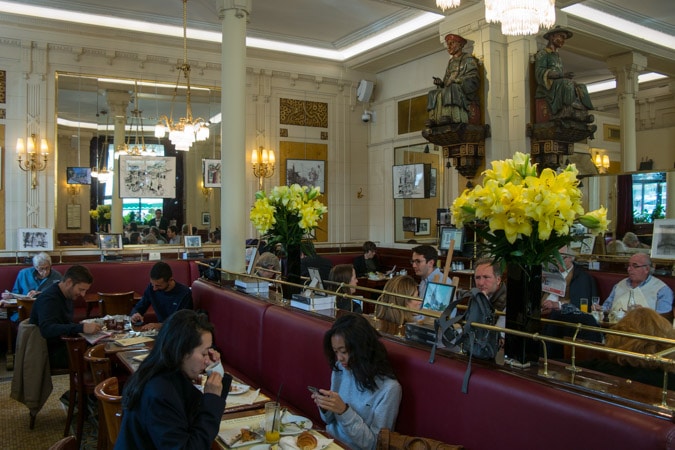 Below: Of course we chartered the waiter to take pictures. The leopard jacket has been on the blog before here and the necklace here (last two pictures with slightly too much alcohol in me. Apparently I get photographed a lot when I drink 😇). 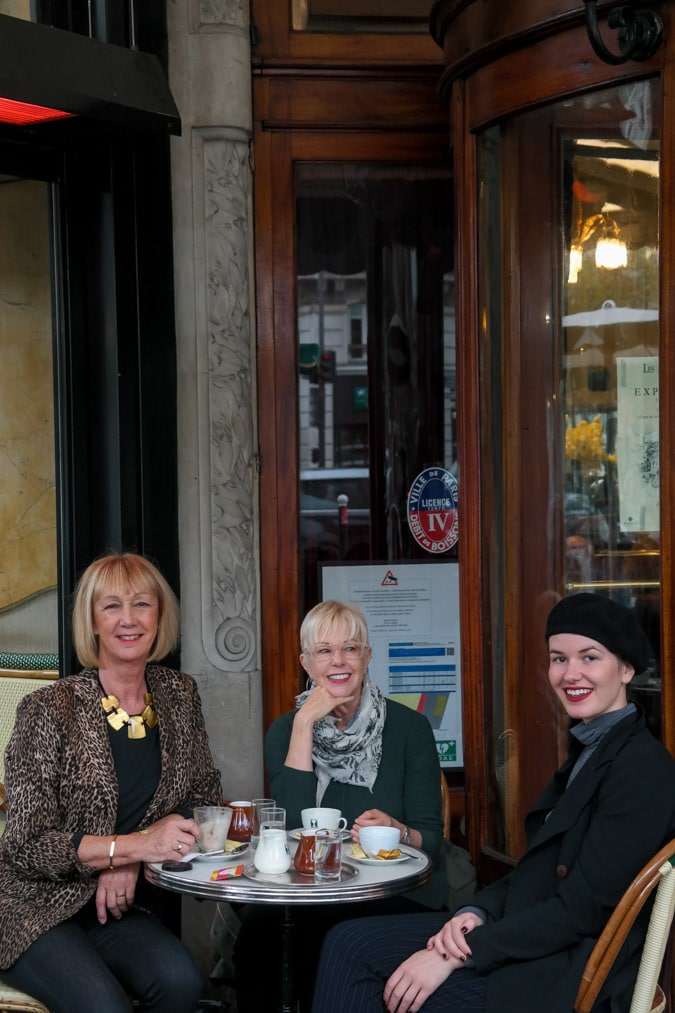 Below: A very good shot of Jeanne. She is now Junior PR at Comme des Garçons. Not bad. Not bad at all. 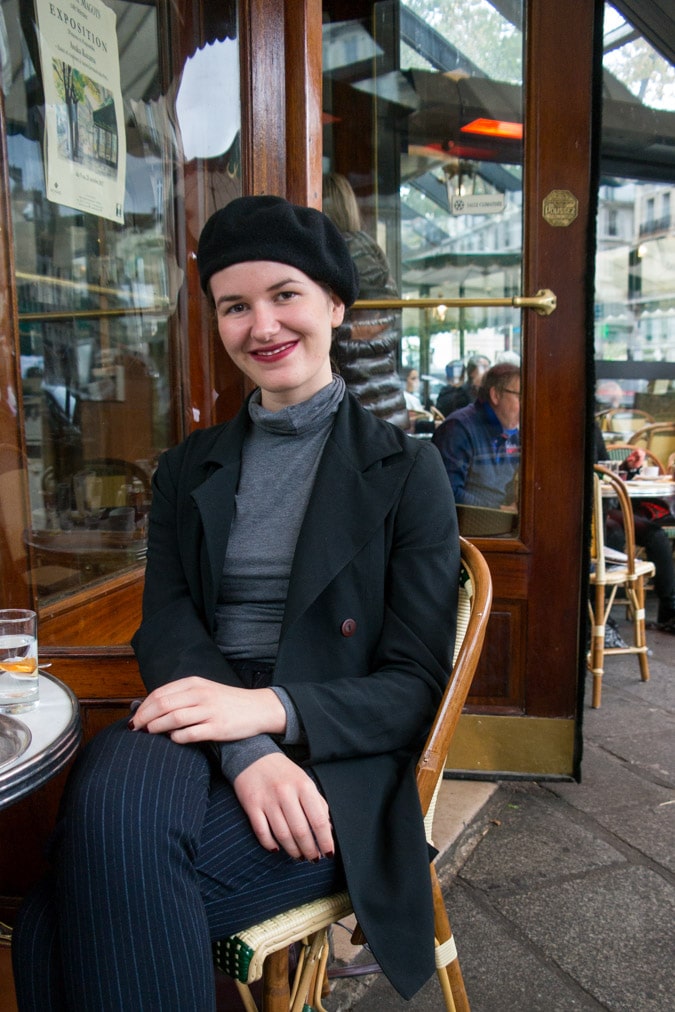 Below: I took a shot of our foot wear.

Below: Our spot in the corner, was a lovely place for viewing people. Watch the hat with flowers. 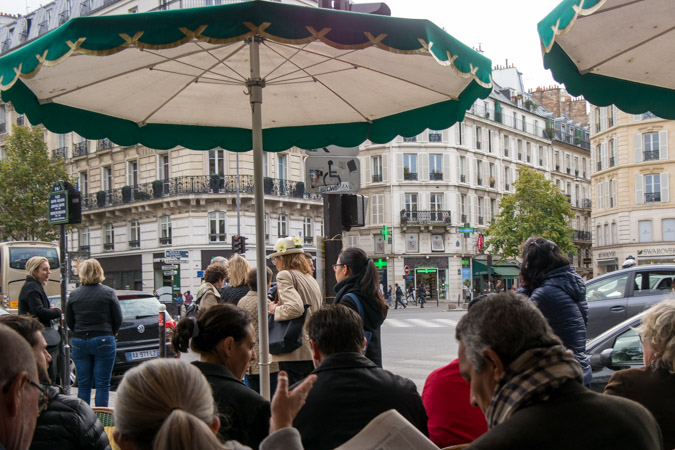 Below: Ohh lovely hat. (I clearly didn’t focus on her, but on the car behind her. Oh well.) 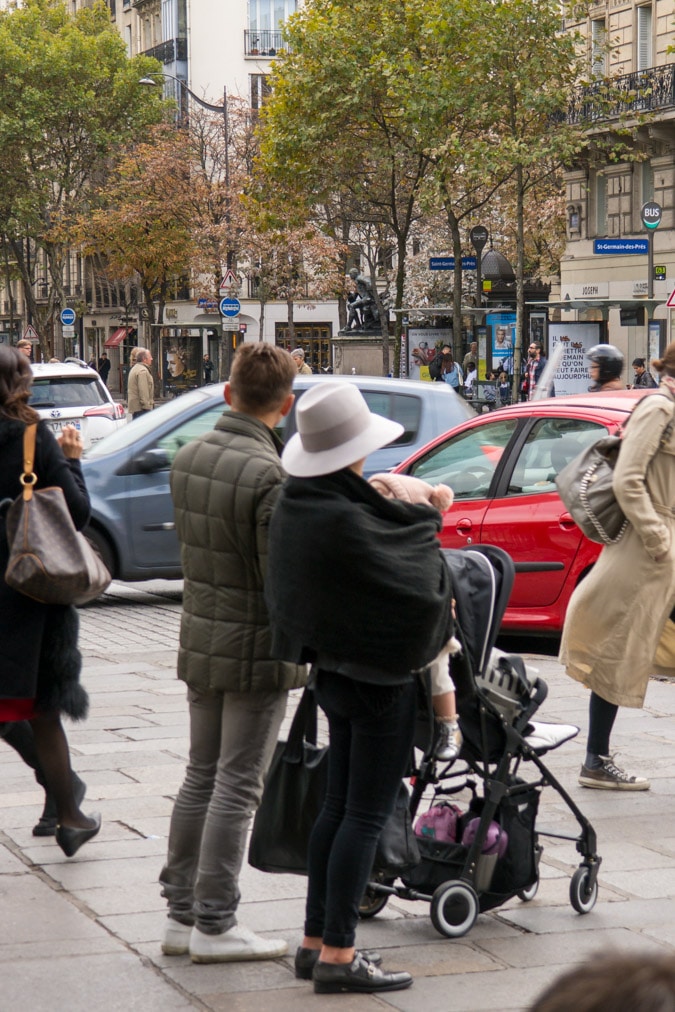 Below: iPhones and selfies everywhere. 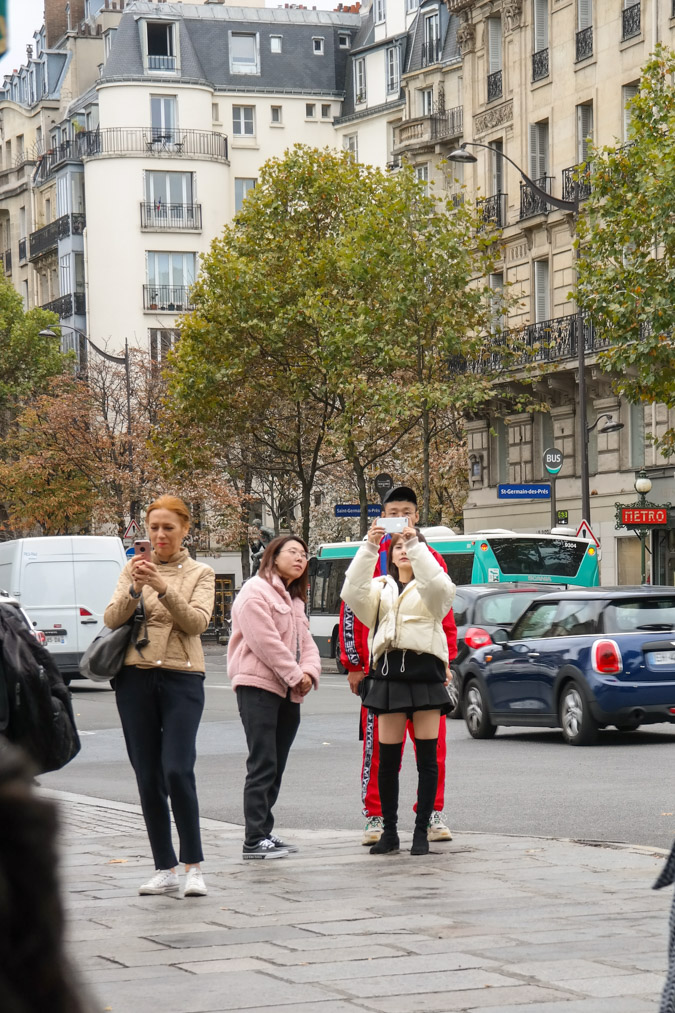 Below: We went on and Jeanne took photos while I was trying to find the right pose. 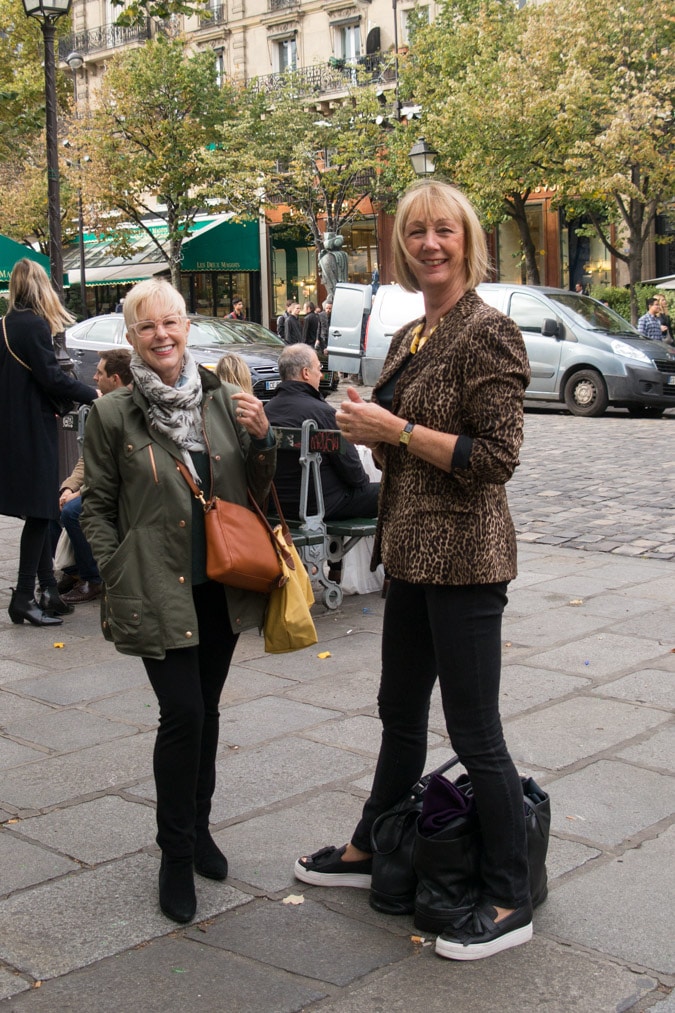 Below: The “I have to pee” position. 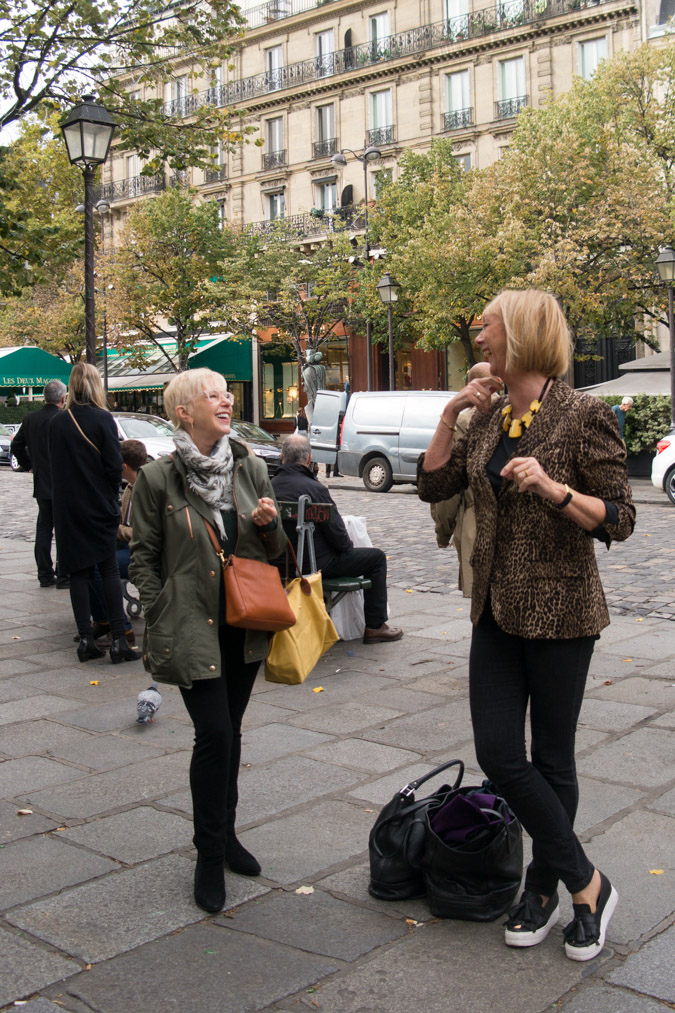 Below: Jeanne at one of those familiar art stands. She is soo French. 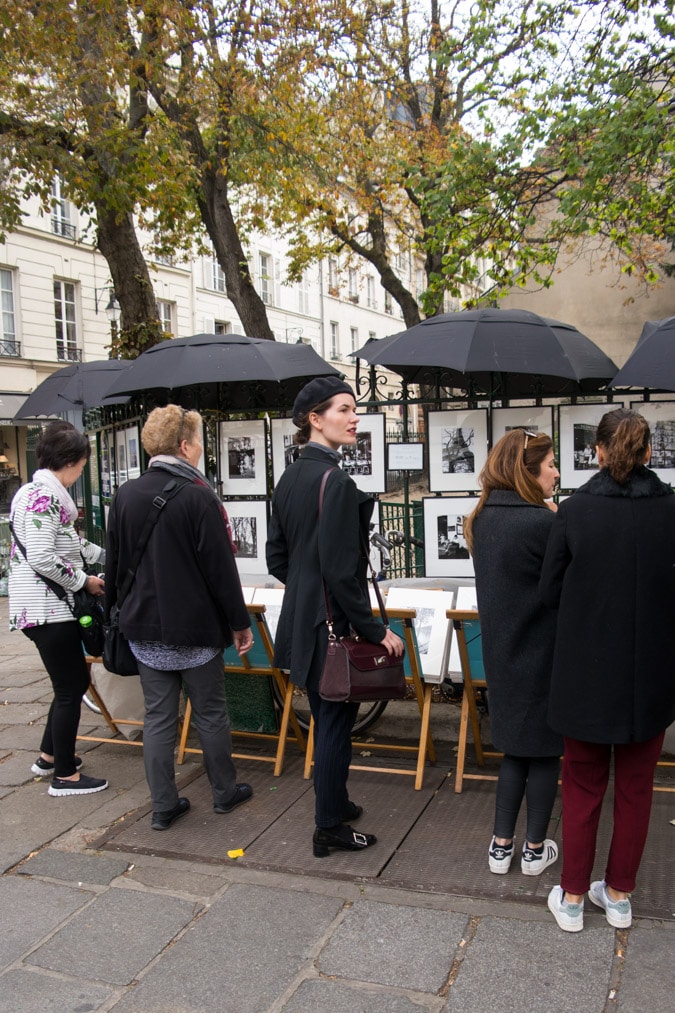 Below: Lunch at Gallery Vivienne. 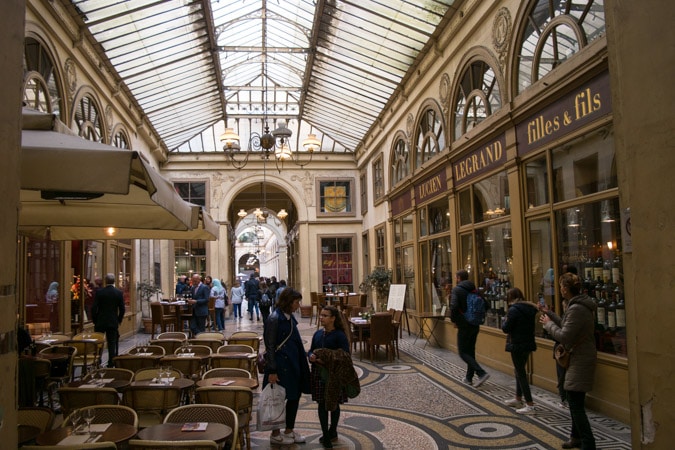 Below: These galleries (there are more of them in Paris), are so nice. 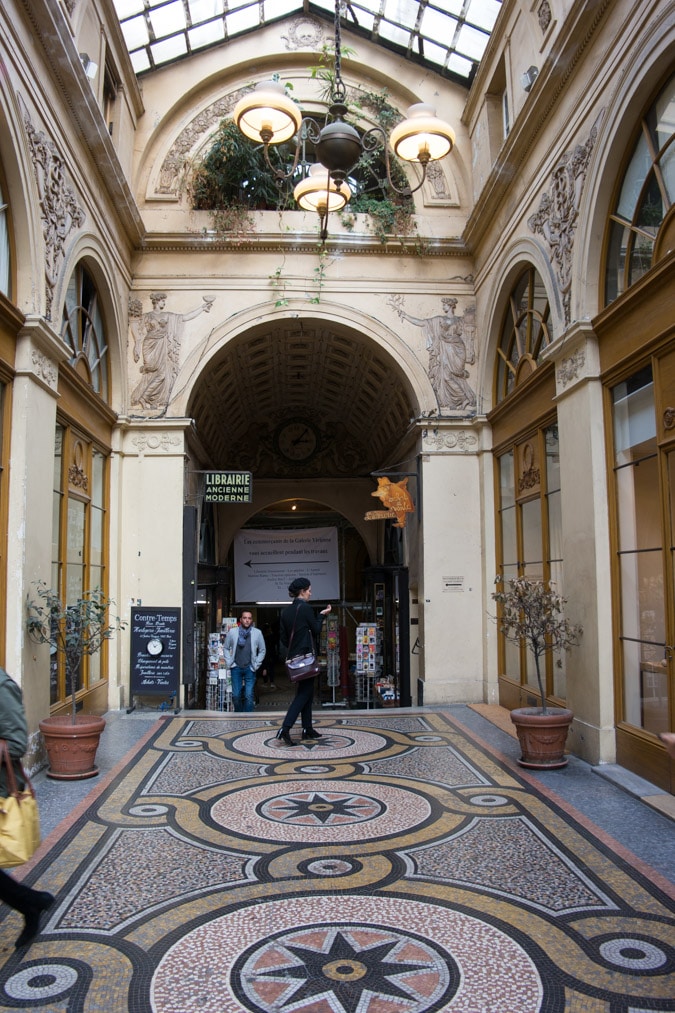 Below: I call this GRAND. 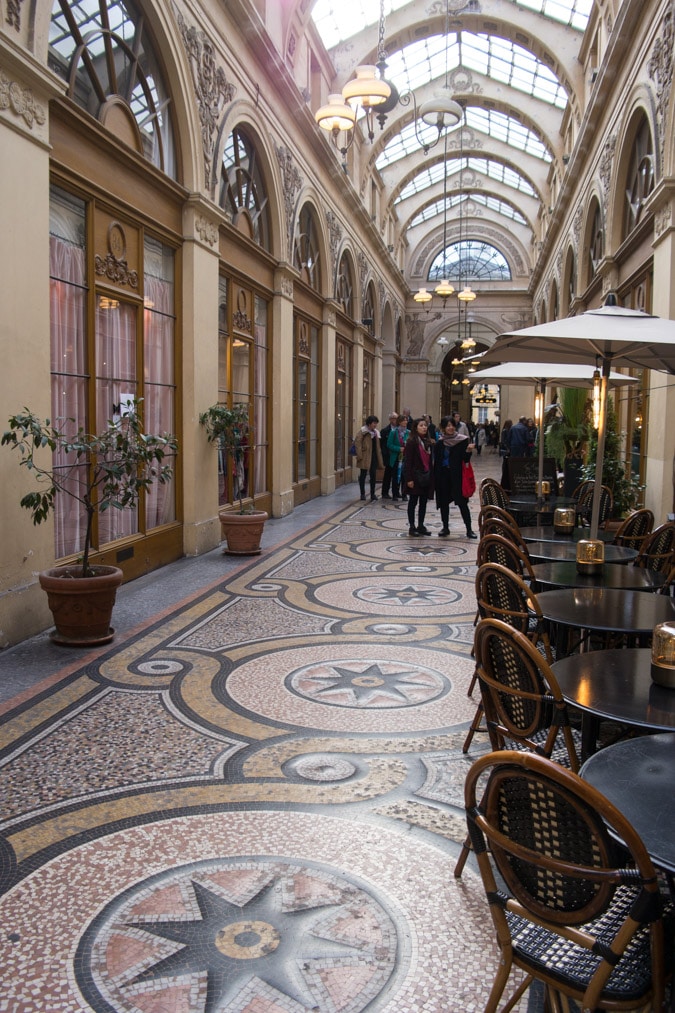 Below: The interior of an antique shop in Gallery Vivienne. 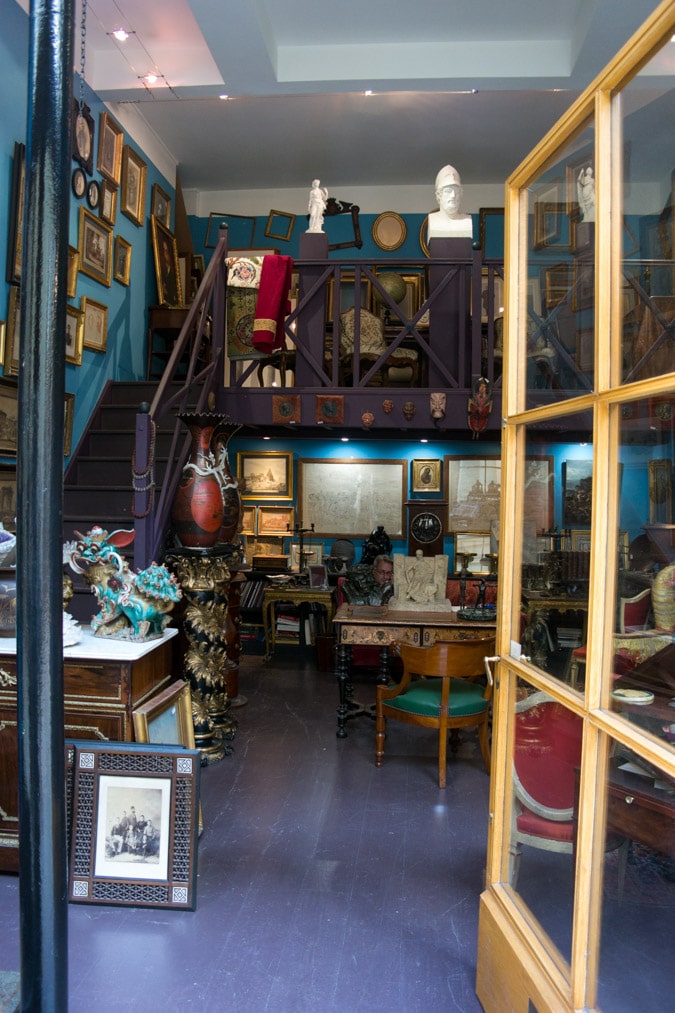 Jeanne had to go about her business so we said goodbye. Susan and I were to meet Lisa, The Sequinist which turned out to be far from easy. Lisa had returned to London from New York on the Friday. And Saturday morning 7 o’clock she was in the car with husband and son. Off to Paris. Which was supposed to be a 5 hours drive. We expected her around 2 p.m. Delay… We expected her at 3 p.m. Traffic jam. By this time we had frantic Whatsapp contact. Lisa compared it with a military operation. We desperately wanted to see each other. Lisa and Susan had never met in real life, and I was looking forward to seeing this charming woman for the third time. But I had to be on the train home early evening and Susan was going to meet another blogger for dinner that evening. Hectic life eh? Blogger life. Anyway we went right across town to meet Lisa at a convenient spot and waited.

Below: Lisa jumped out of the car when they drove through the street where we were waiting. I spotted her. Can you see her? 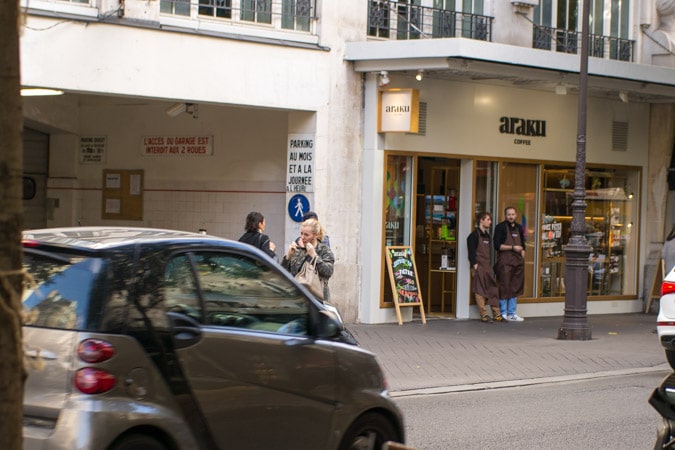 Below: I felt so much like a paparrazo. And Lisa played her part as a star with big sun glasses, haute couture bag, wearing a camouflage jacket and jogging trousers. 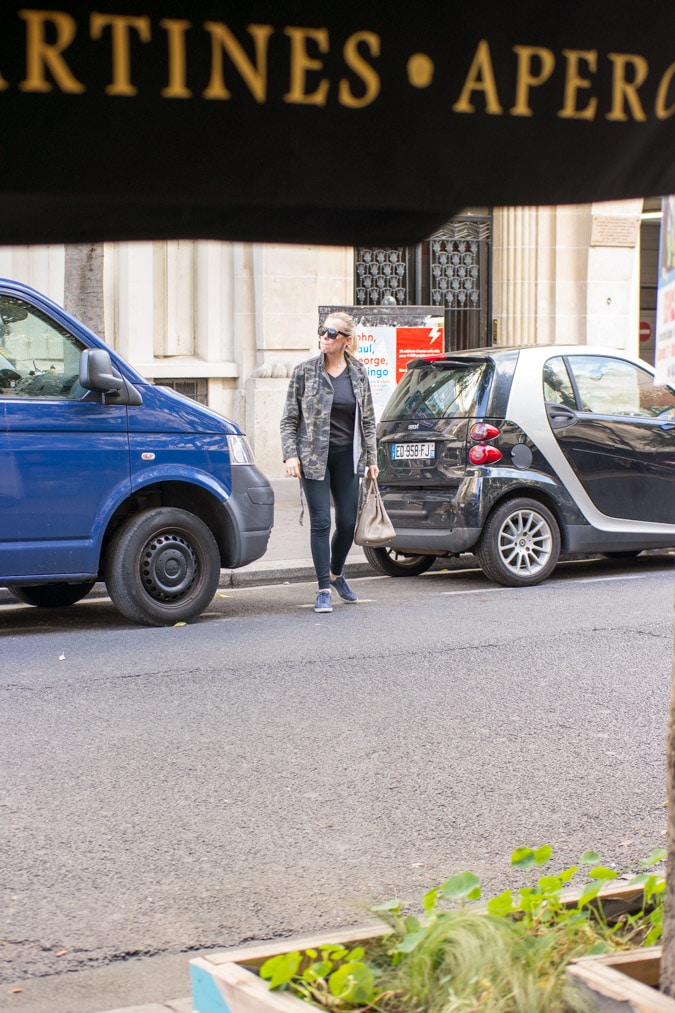 Below: What makes me rather jealous (I know, I know.. bad emotions), is the way she looks after a jetlag from New York and an 8 hour car ride. I mean…. how can you look so flawless? 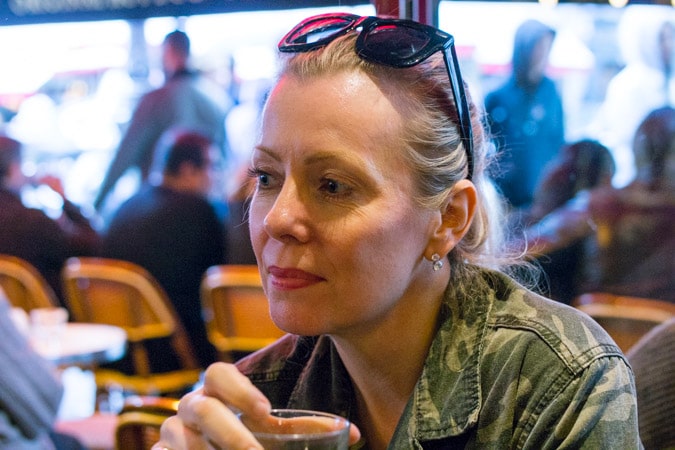 Below: Anyway, it was lovely to see each other even though it was brief. 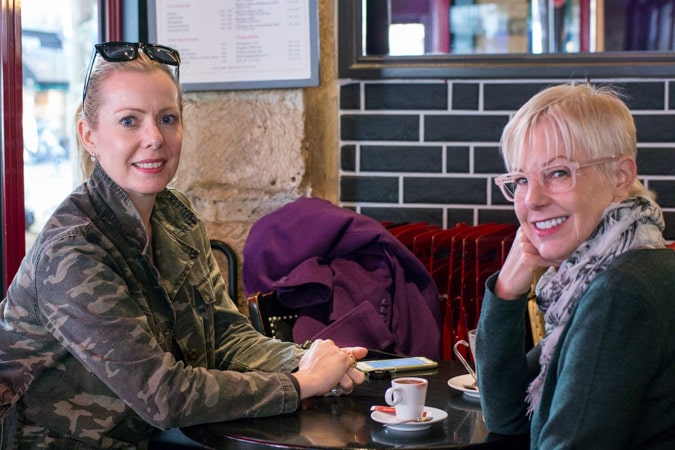