Some of you have seen this ring on Facebook or Instagram. It is the Christmas gift of my husband Ron. He read my post about the Jewellery Art Fair, saw that I liked this ring but had no money left. Reason for him to order it and “hide” the jewellery box in a Christmas piece. Which I was bound to find. Totally unexpected and totally romantic. Not only is he generous and romantic, he also has a great sense of humour and makes me laugh all the time (a quality in a man which is highly appreciated by most women; I read that in a survey). Quite sickening, isn’t it? Don’t you worry my dears, he has a lot of flaws as well. Which actually makes him quite perfect. Because, who wants a perfect partner? It is imperfection that makes him perfect, really.

The designer of the ring is a young woman: Joyce Stouten and her company name is De Ekster.

As I was reminiscing, as one does around Christmas time, I thought of all the gifts Ron bought me. So many. In this Christmas post I am going to show you old pictures, old outfits. Some of you have followed my blog from the start in November 2012, but I doubt whether you can remember every outfit. My hair is still brown in most photos. The quality of the old photos leaves a lot to be desired.

What all photos have in common is a gift from Ron. In chronological order. (Well, sort of.)

Below: Let’s start with the “Maastricht necklace” which he bought me at the end of September. 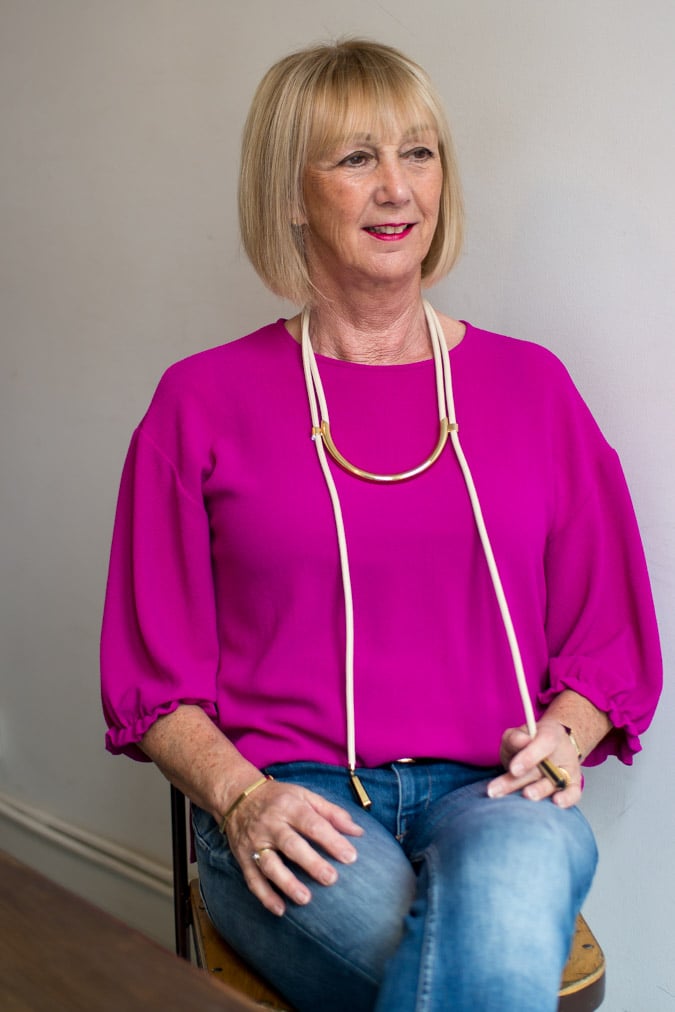 Below: Remember this light pink Filippa K coat? I came home one day from shopping in a department store with Sylvia of 40PlusStyle and told him I had found this fab coat, in the sale no less and I was broke again (I am often broke … working on that though). He immediately went online and ordered the coat. 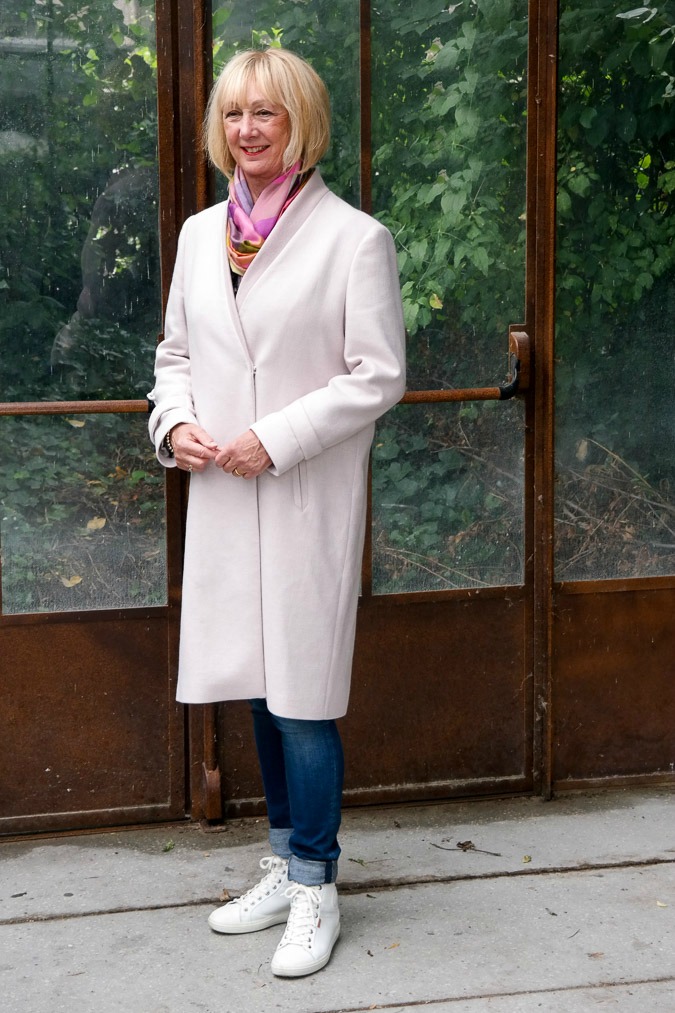 Below: The Vincent van Gogh knitted spencer from the market. OK, he paid half of it. It still counts. 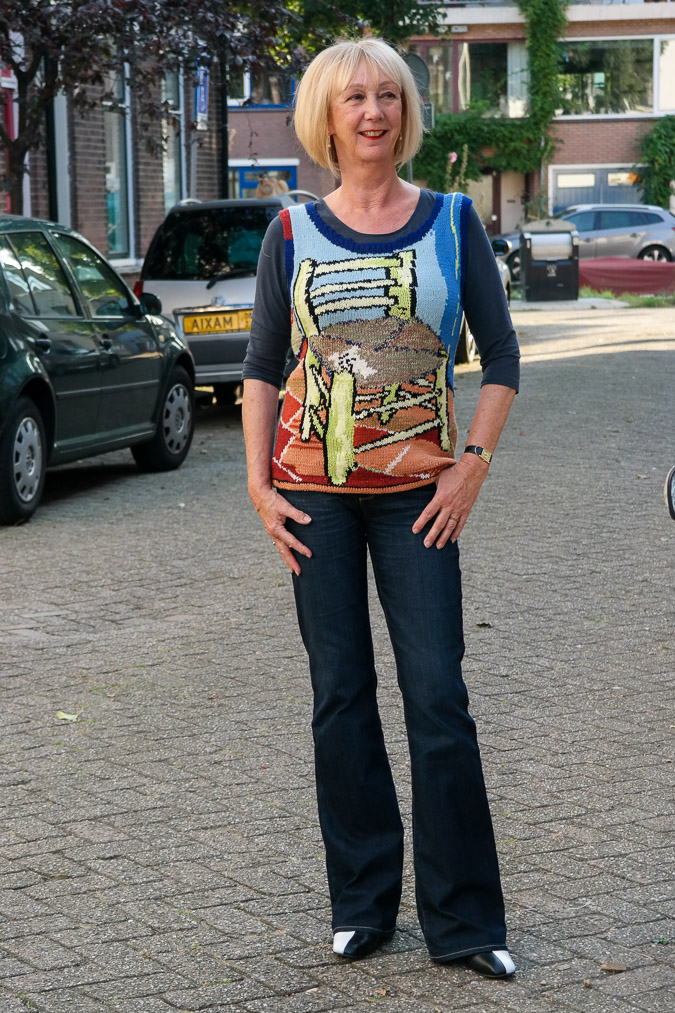 Below: The white sweater Marc by Marc Jacobs, when we were shopping in an Amsterdam department store. 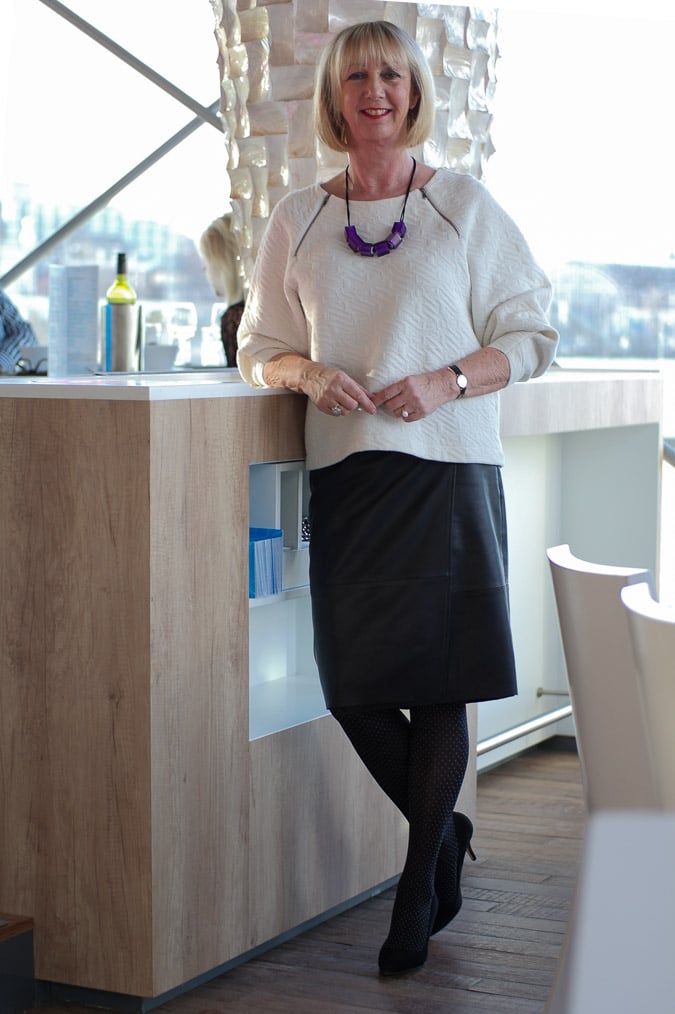 Below: Bought this Kenzo top (and a jacket) when I was in Paris with my friend Lia. That city trip was also paid by Ron. When we called him to raise a cheer, he said we could both spend some money on something nice….. (I insisted he gave us a budget…). 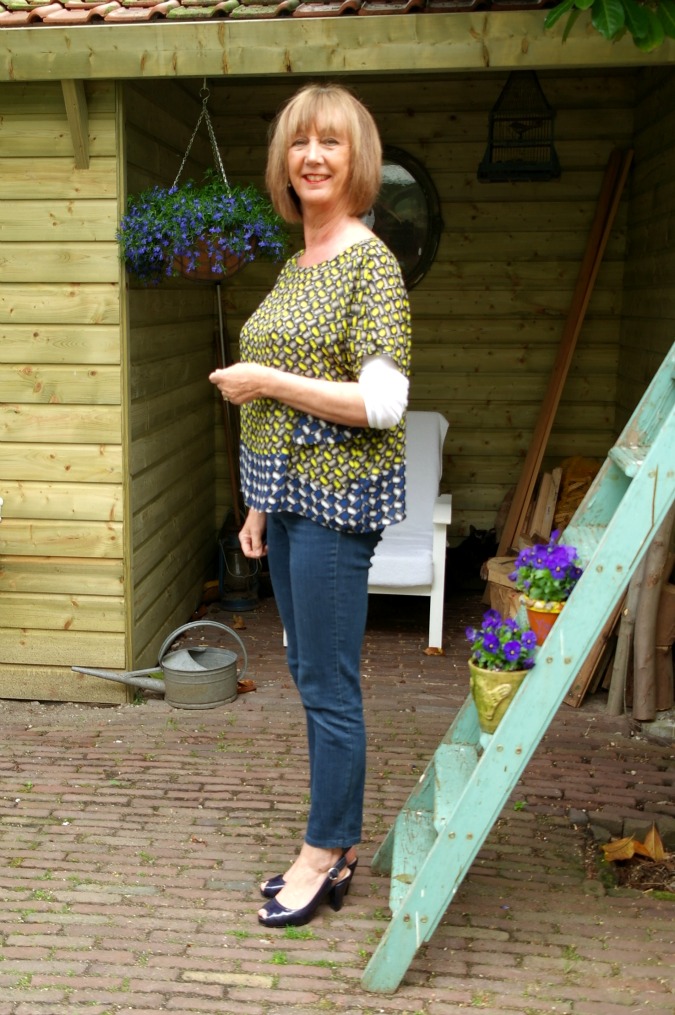 Below: One day we went to a shoe shop when it was SALE time. He bought me these three coloured booties…. 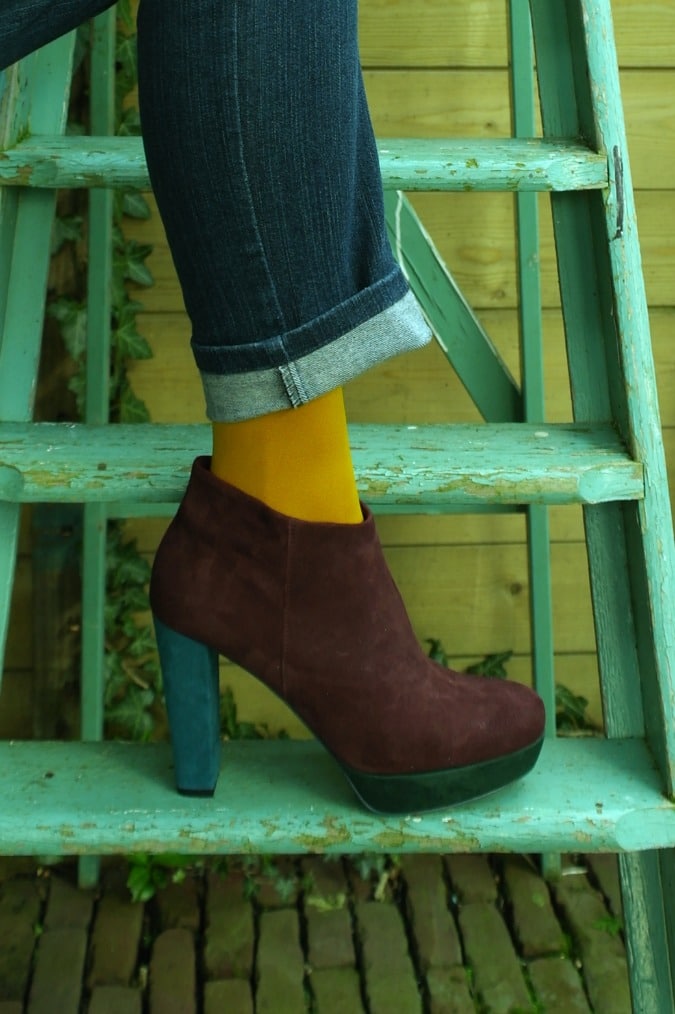 Below: … and he bought me the black patent leather shoes I am wearing underneath this suit. And don’t you dare say something like: “OH you already had a black suit, with a double breasted jacket!” I don’t want to hear that. 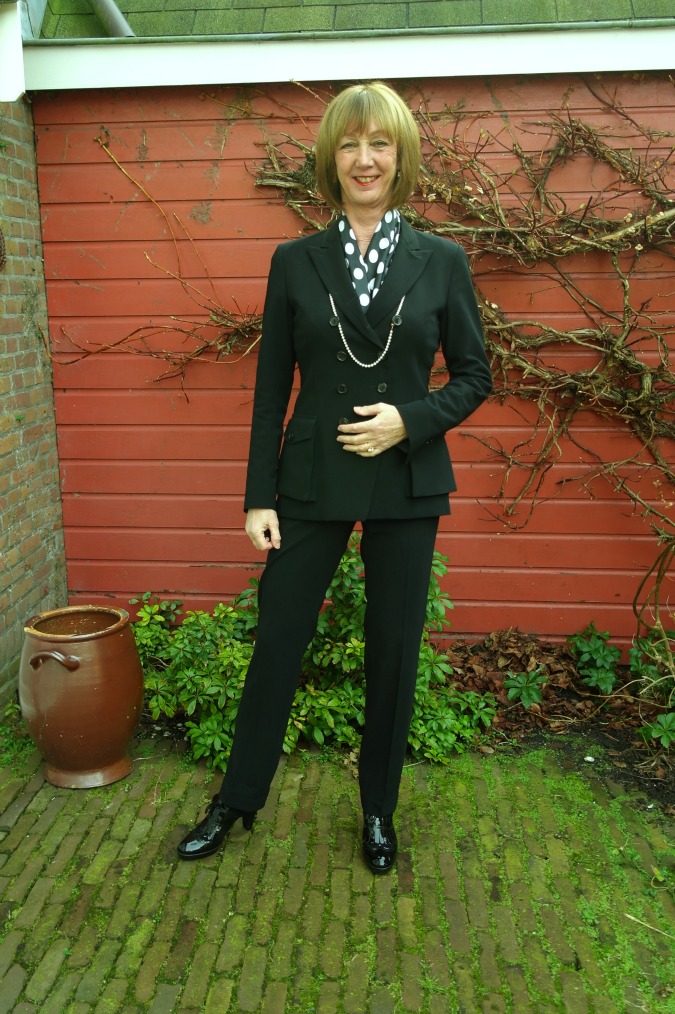 Below: Same department store in Amsterdam. We walked in and there were this sweater and those trousers on a mannequin (Sportmax). “That is really nice”, Ron says. I replied: “It certainly is.” Ron: “OK, I will buy it for you”. Me: “Don’t be silly, that is not necessary, no don’t do that.” We walked on and as we turned a corner I thought: “Why did I say that? Am I mad???” And withdrew my objections. 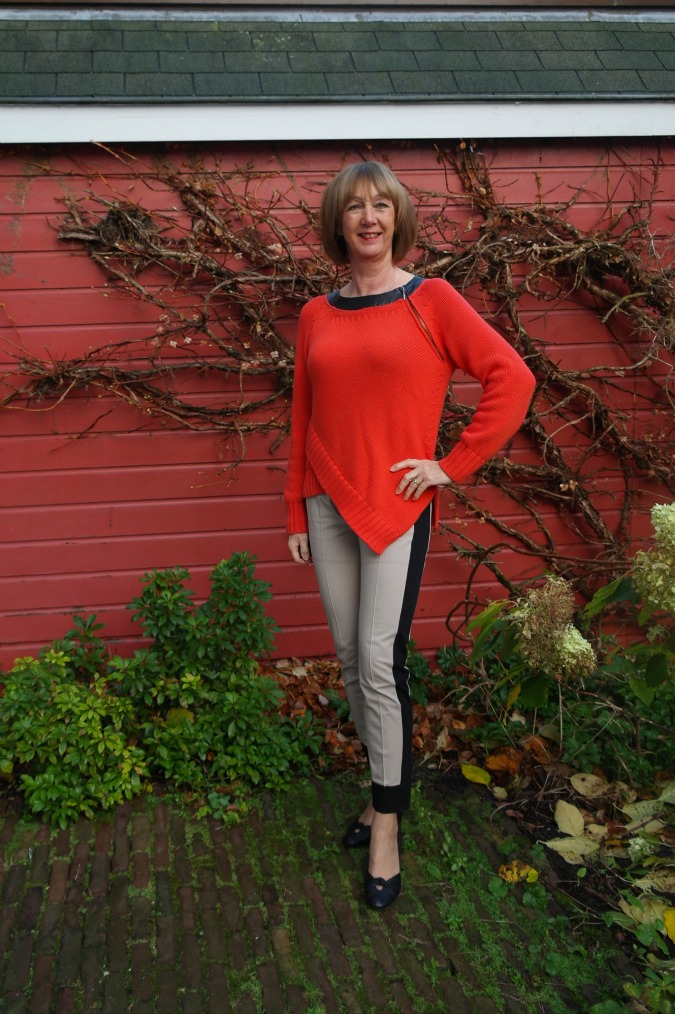 Below: On a citytrip to Antwerp (Belgium) we found this genuine Japanese antique kimono. Present. 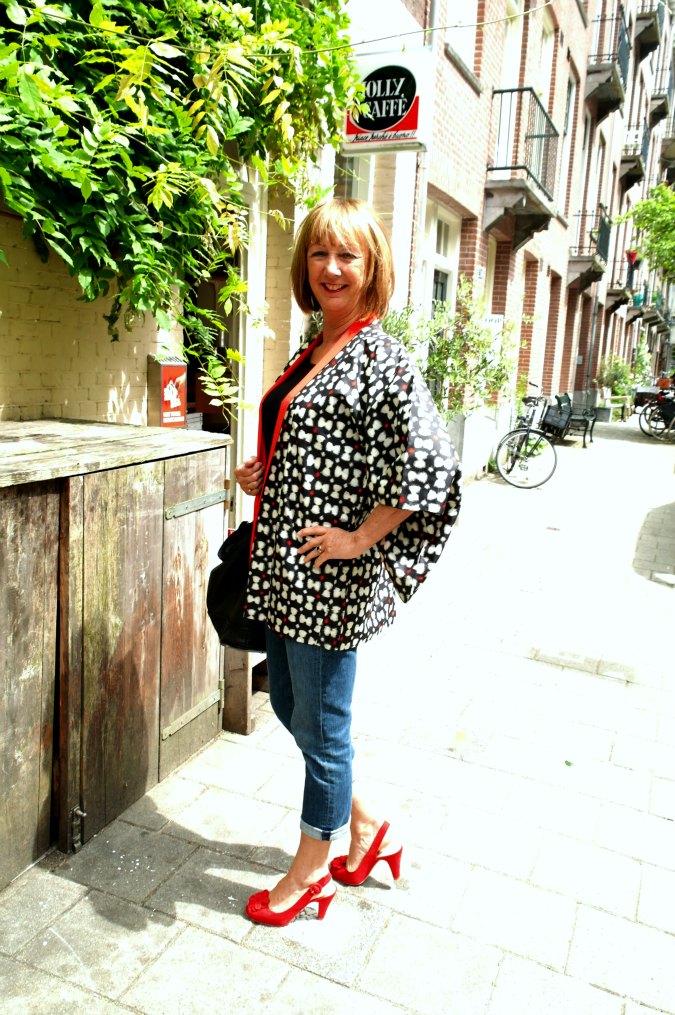 Below: Another trip to Antwerp where we found this yellow dress with matching cardigan. Ron wanted me to have it. 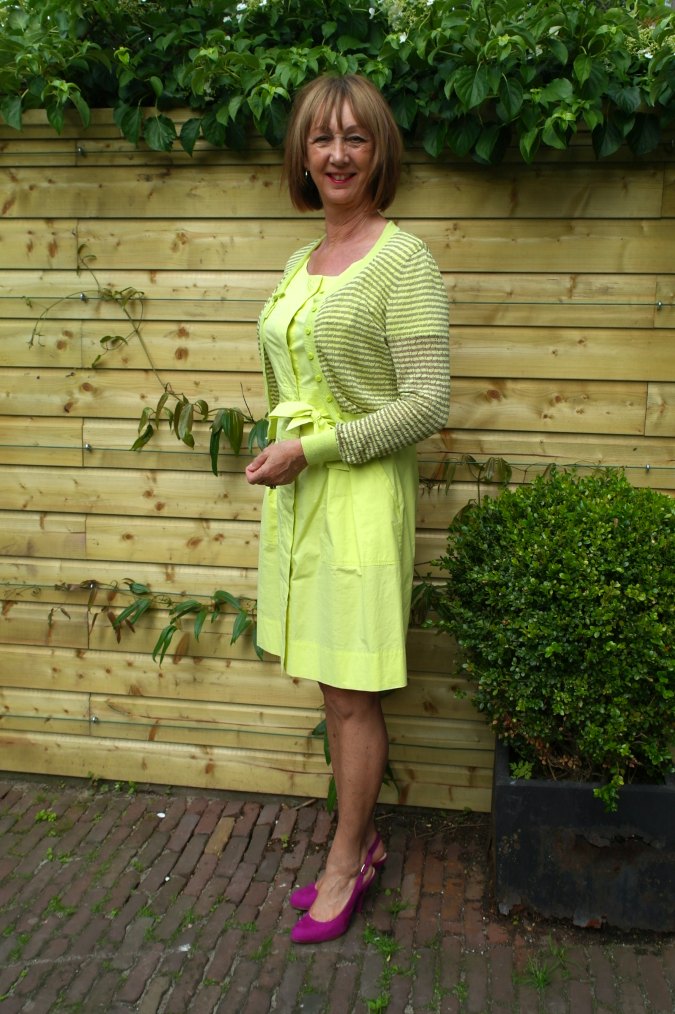 Below: He insisted that red boots would look awesome underneath that yellow dress (above). I wasn’t that sure, especially as I don’t like mixing summer clothes with winter items (boots). But I wanted to follow his advice and he bought me the red booties I am wearing in the outfit below. They were not really working with the dress. 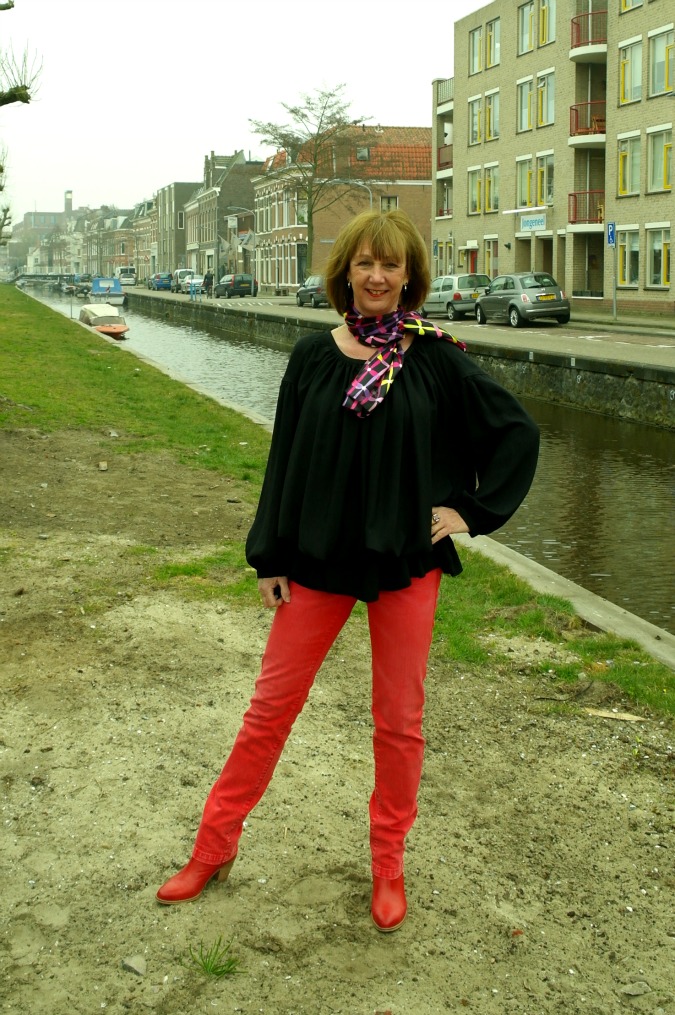 Below: Therefore, in addition to the red pair above, he bought me the red cowboy boots below. Never knew what to wear them with. A shame as they are really nice. Any suggestions? Non boho suggestions? 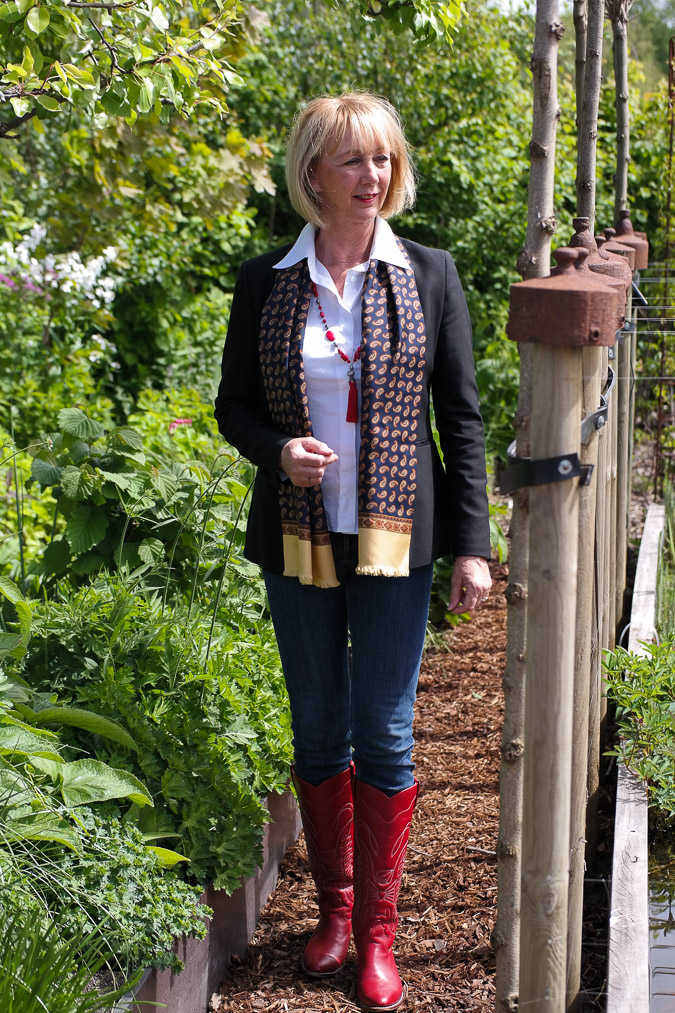 What you are about to see below, are all presents from his time when he had a project as sort of a “problem solver” for a shop. They sold Dutch designer clothes and boy oh boy, did Ron bring home some beautiful things. That project could have gone on forever as far as I was concerned.

Below: To begin with, this silk scarf with what appear to be polka dots. When you lay the scarf flat, you can see that the dots create a giant hamburger. Funny. 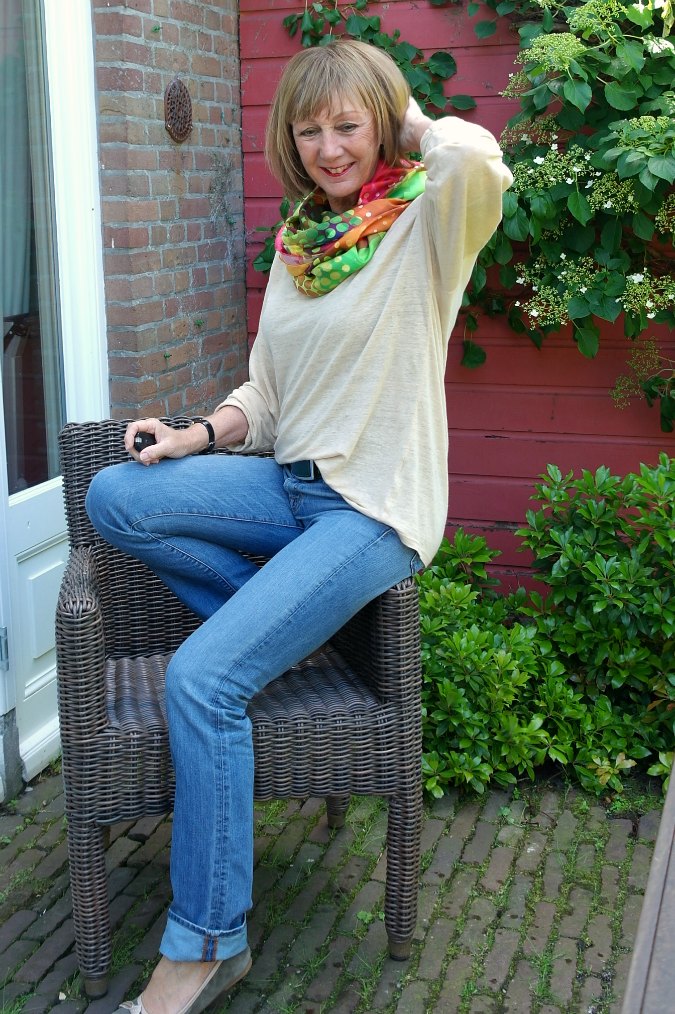 Below: The ochre yellow trousers by Won Hunderd, which always get me so many compliments. This is the right way to style them. Unfortunately it is also the only way I know how to style them. 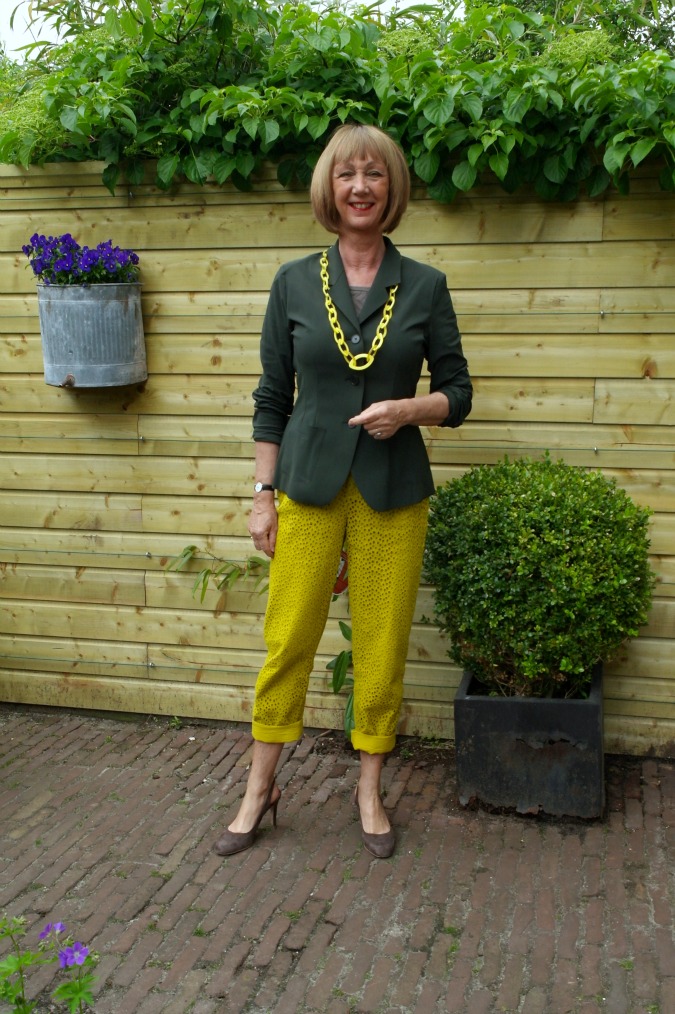 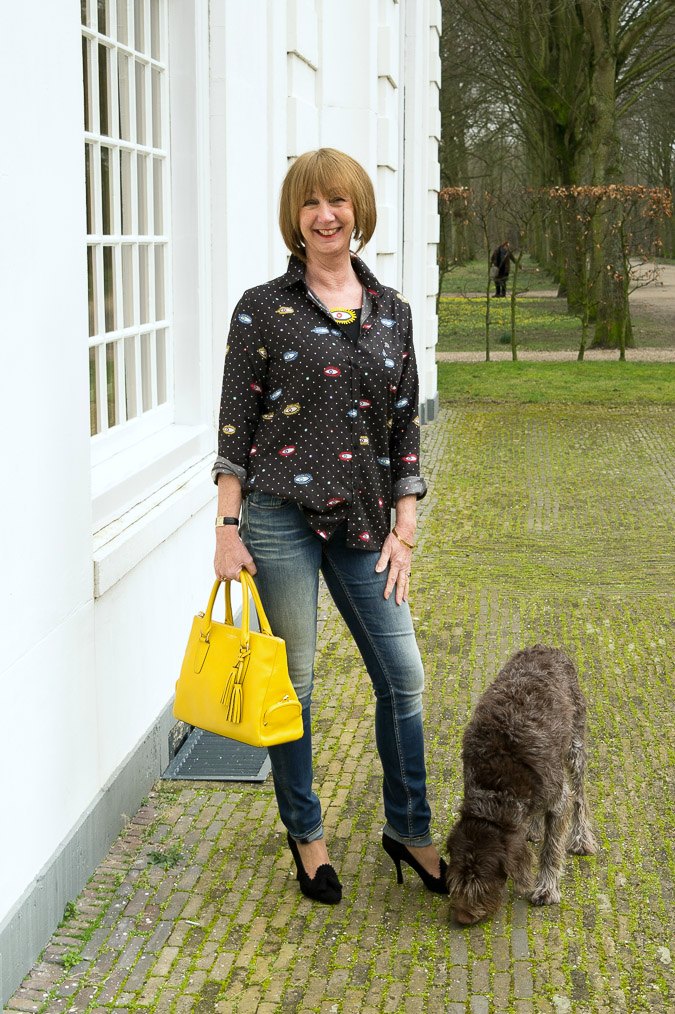 Below: Because it is such a good shirt, below a second styling of it. 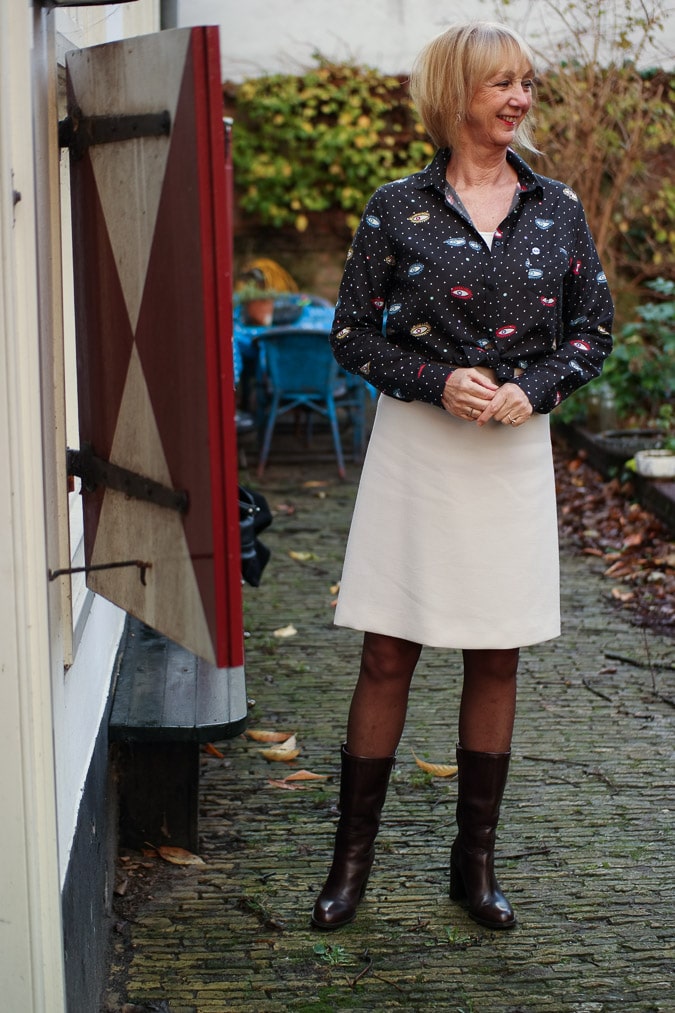 Below: Another design by Spijkers SIS Spijkers: the trousers with a playing kitten. 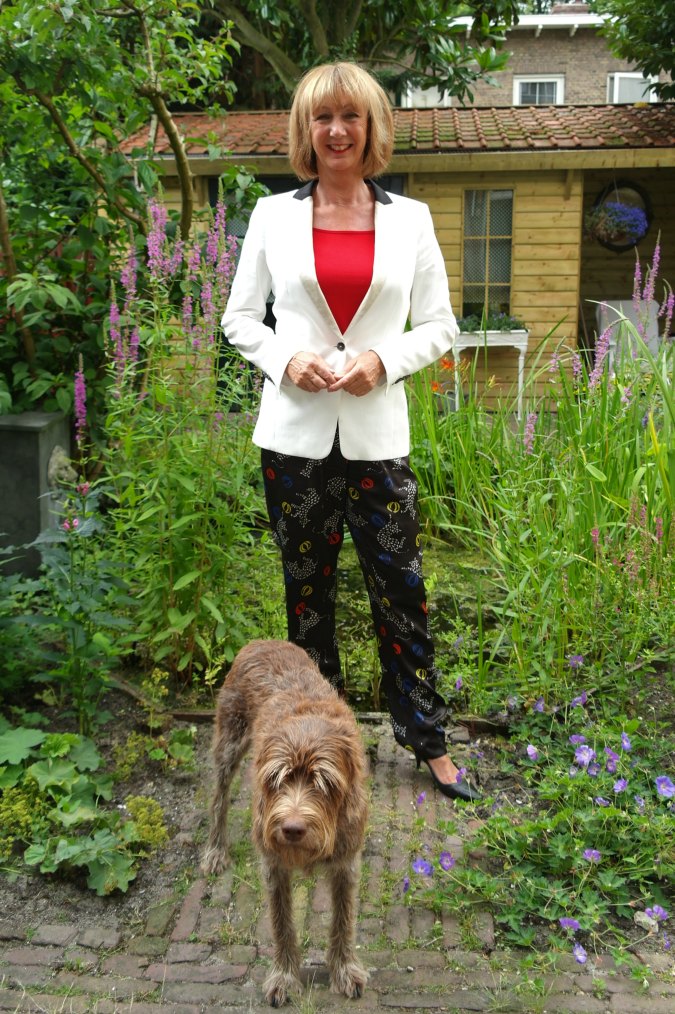 Below: A yellow polka dot blouse by Spijkers SIS Spijkers. 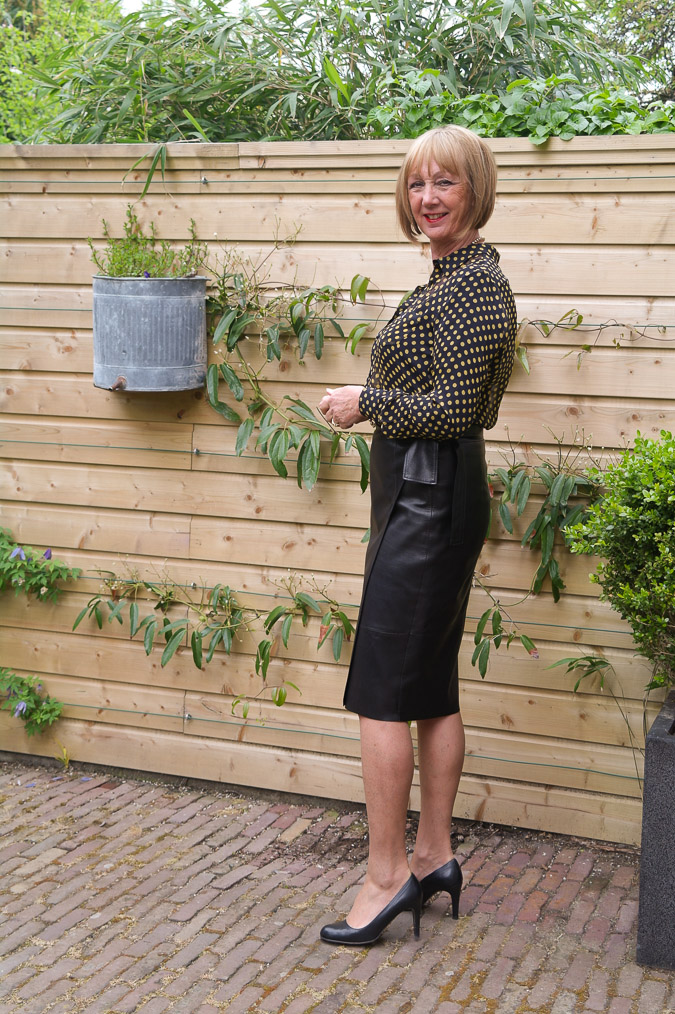 Below: And last, a hat from a holiday in France. 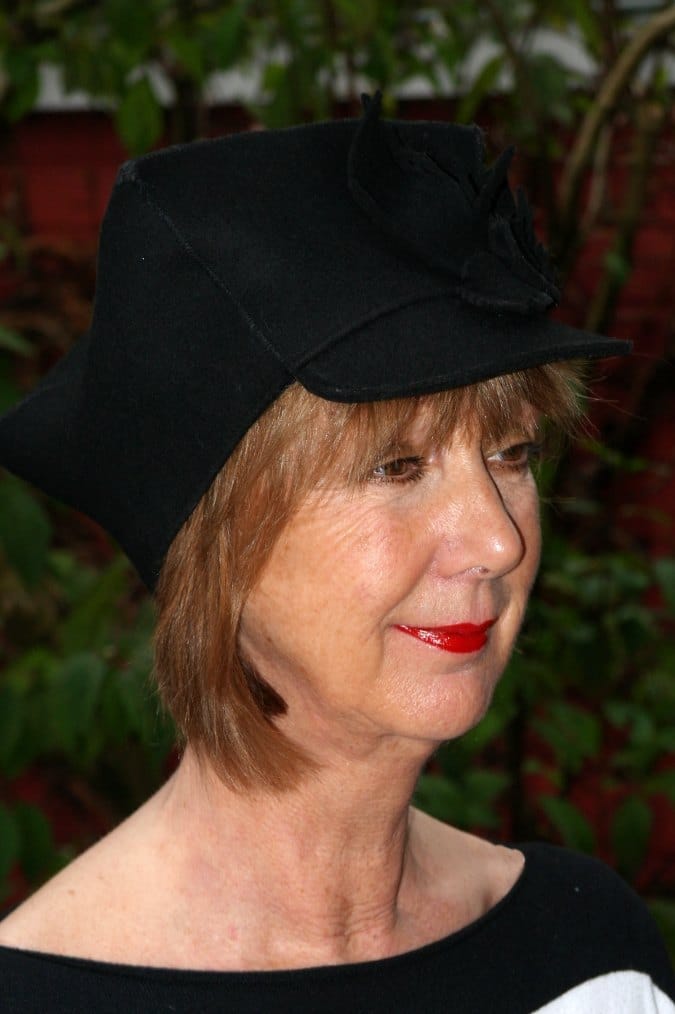 I haven’t shown you all presents. There are so many jewellery items and most likely more clothes. But you get the idea: he is a very, very generous man. And NO, that is not why I married him. To tell you the truth, in the beginning I wasn’t very “into him”. Thought he was a really nice guy. As a friend. Until he suddenly started kissing me one day:…. fireworks, flowers, a band… and cupid aiming right at my heart. I fell in love immediately and that was that. 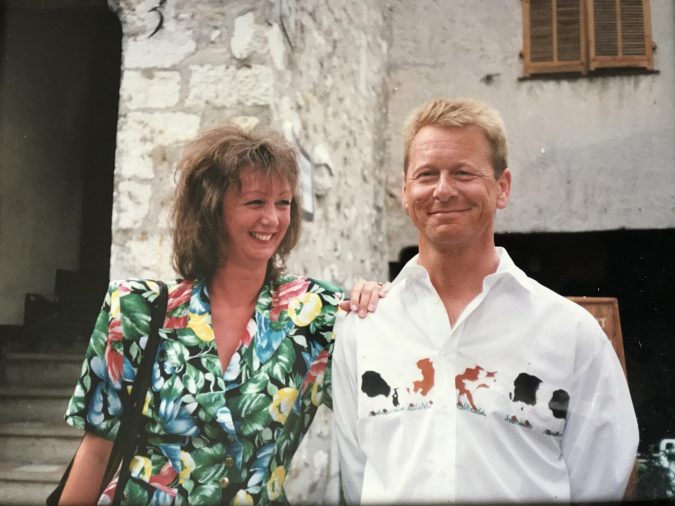 Now, isn’t that nice? A love story to end this post. I think that is very Christmassy.

Have a great time with your loved ones.