For most of this year’s Christmas days the dress code was “ugly Christmas sweaters”. Noooo…. I hate that. What happened to dressing up for Christmas? I have seen so many pretty party dresses on other blogs. As I am on a spending curfew, there were no new dresses in my closet. But hey… the ones that are already in there, aren’t exactly worn-out. I had plenty of choice. So I cheated. In this post you will find me in normal outfits and the rest in ugly Christmas sweaters. And some hilarious moments.

Above: This is the only Christmas sweater I wore for 1 hour on second Christmas day. The snood is separate from the sweater which had a horrible round neckline.

The day before Christmas we were to go to my mother’s house and bring food for dinner. Unfortunately Ron was really ill. He got a terrible cold which he did not want to pass on to my mother, so I went alone. I knew my mother would make the effort to dress up and I honoured that.

Below: My mother (89). She has recovered very well from a shingles attack in her face, poor thing, but is still in pain every day. Like me, she likes to hold on to something when her photo is taken 😂. 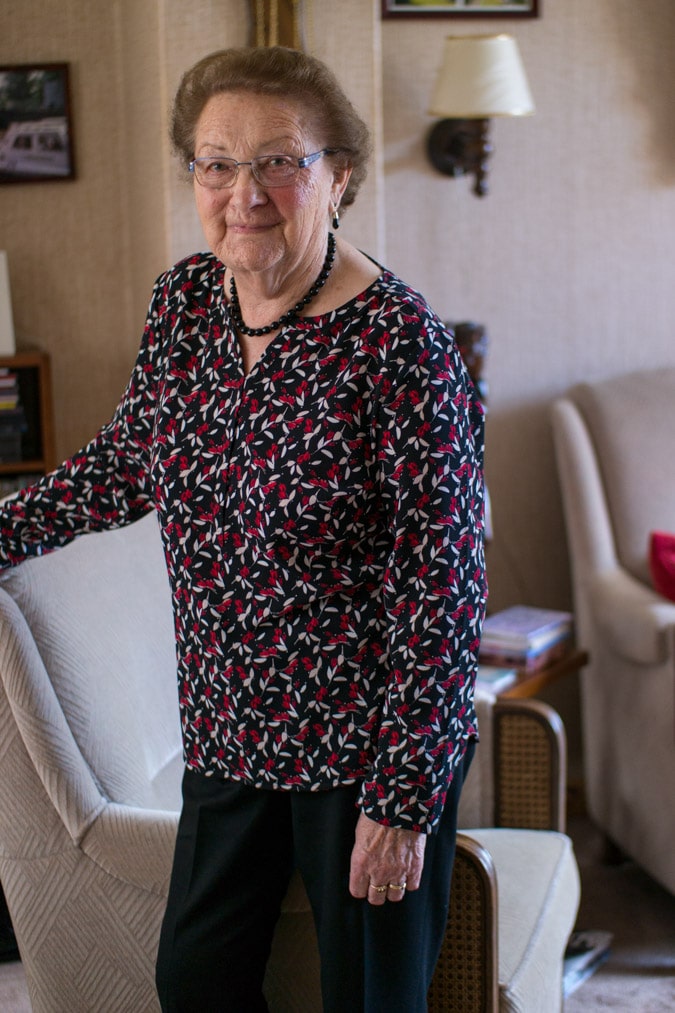 Below: Bad distorted iPhone photo. This was what I was wearing: black sweater, orange leather skirt, suede pumps and a paint brooch by Xenia Walschikow. 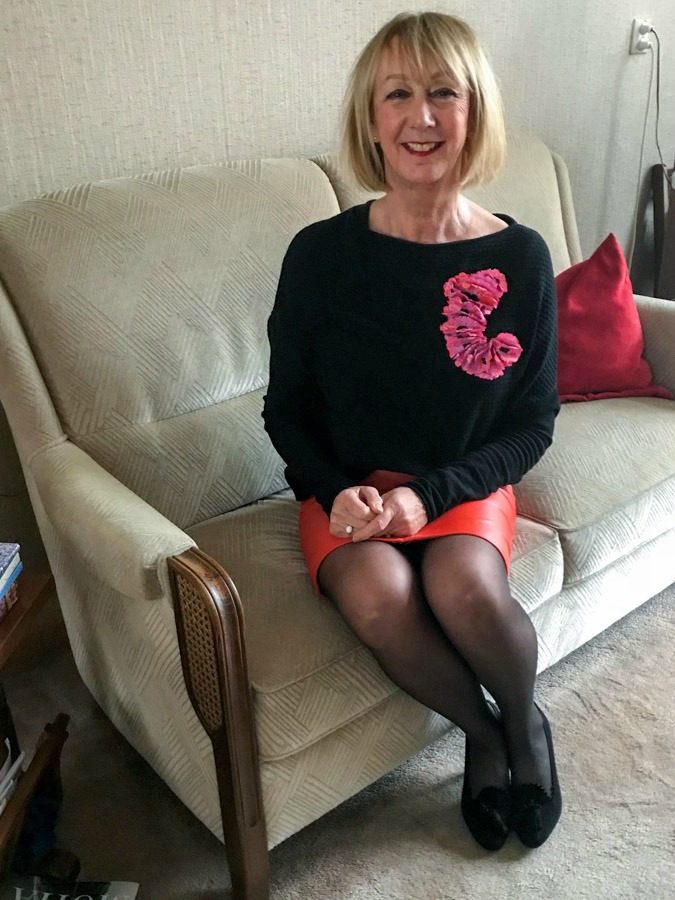 Below: First Christmas Day. First cheating. We spent the afternoon and evening at my stepdaughter’s house. Nicky is an excellent cook (yay). Wearing lots of glitter brooches as a nicer “Christmas sweater” than the one at the top of this post. 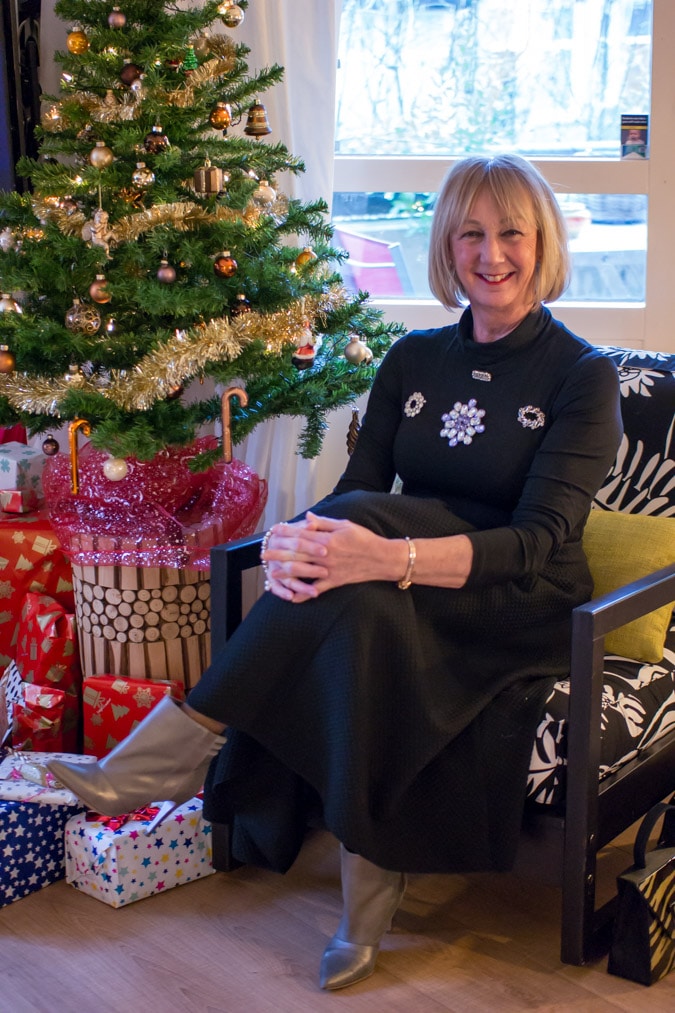 Below: Nicky’s house had the Christmas spirit with a tree, presents, ornaments and candles. 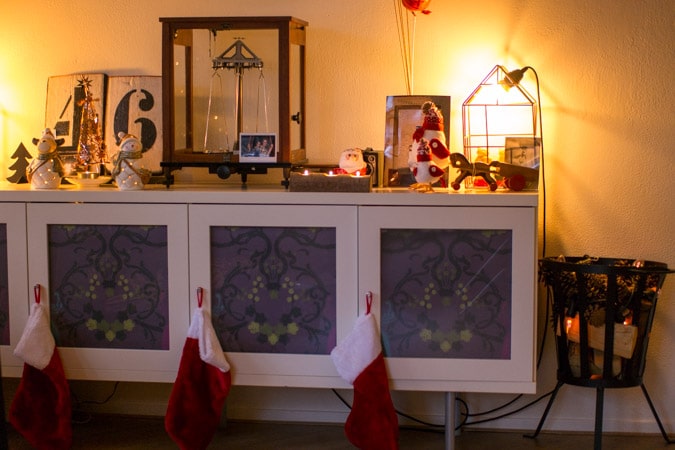 Below: On her wall hung cheers in anticipation of her birthday December 28. 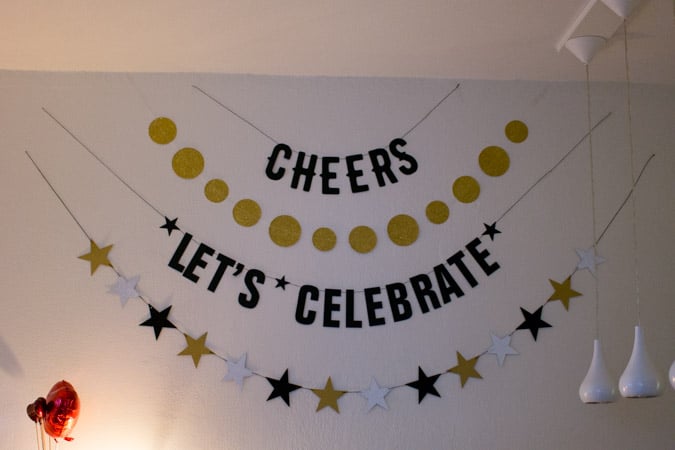 But… it was “ugly Chrismas sweaters code” in her house.

Below: Nicky opted for an ugly Christmas suit with a reindeer headpiece. Ah.. when you are young… everything looks good. 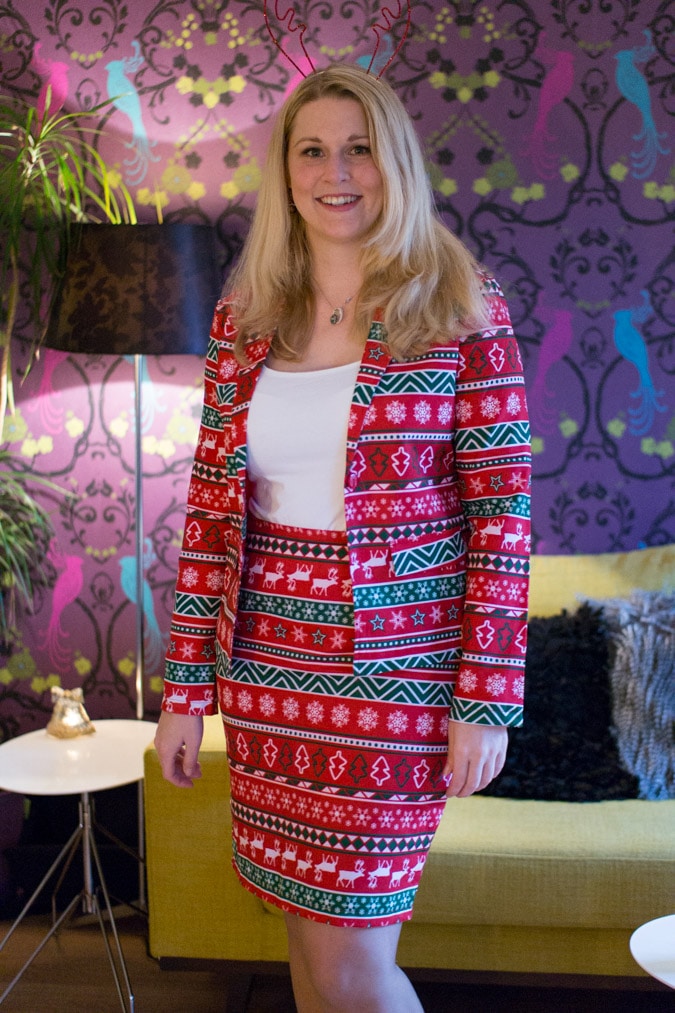 Below: Her boyfriend Randolf got the award for worst Christmas wear… pretending to sit on Santa’s shoulders. It was more obvious when he was standing up, but haven’t got that picture. 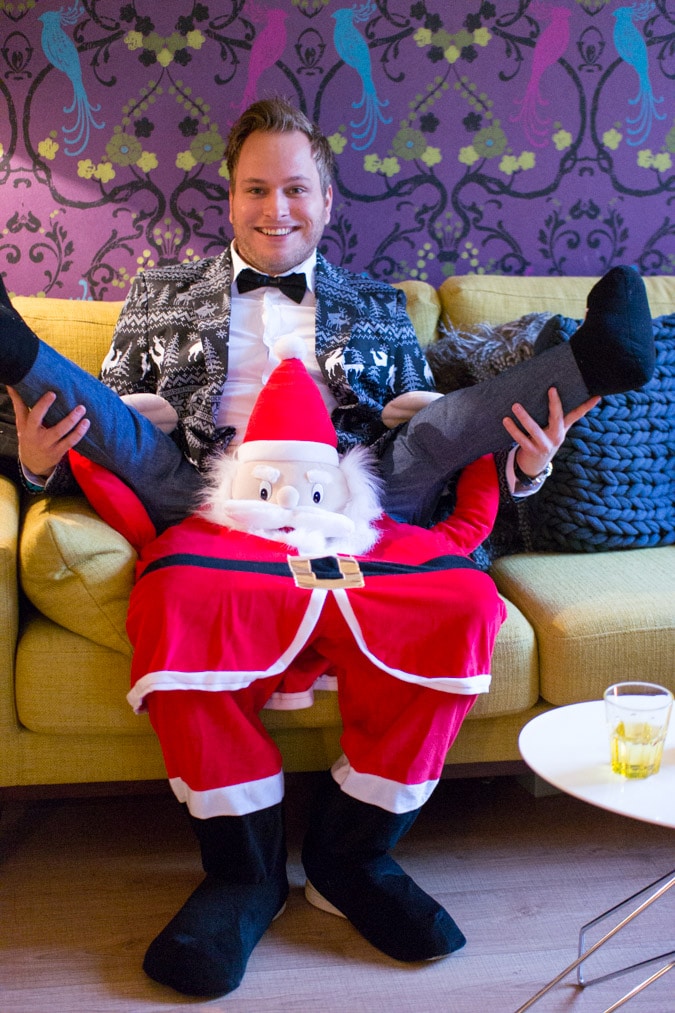 Below: The suit he was wearing underneath Santa was meant to be ugly too, but he looks quite good in it. 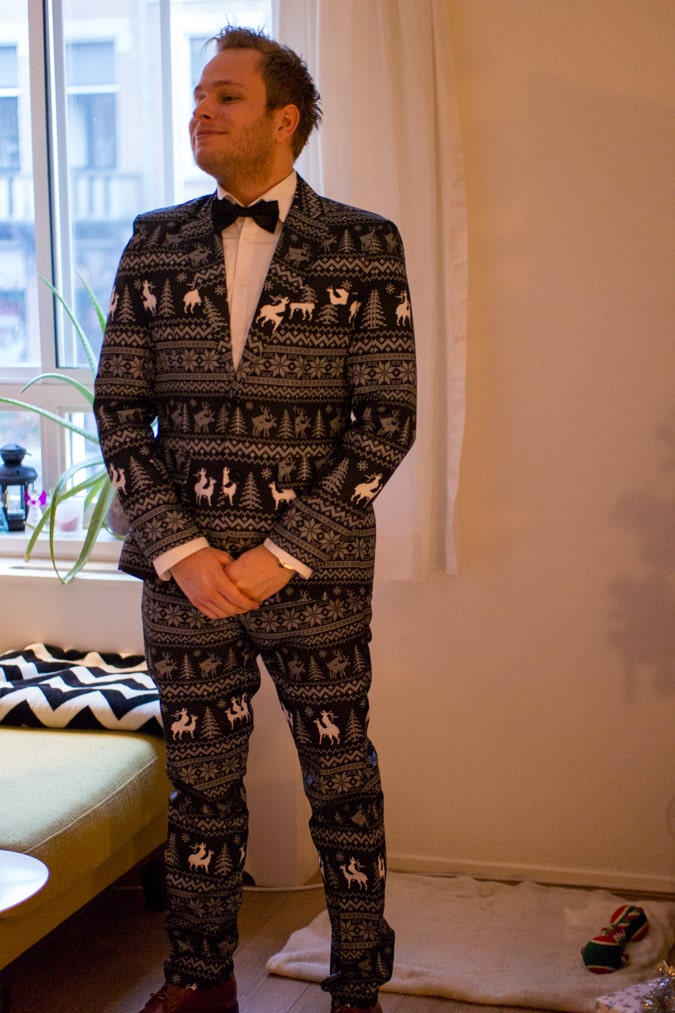 My dear husband might have gotten the award as well. His sweater was rather shocking.

Below: First picture shows you Santa’s underwear (an iPhone was hidden in the sweater.) ……….. 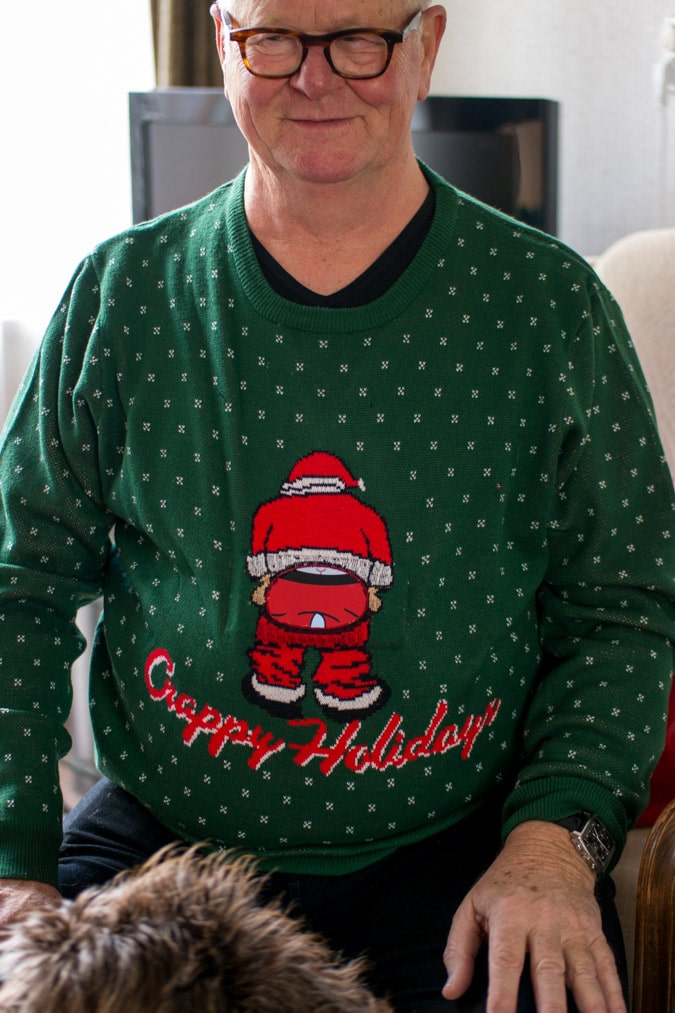 Below: … second picture shows you Santa’s bare bum, which was swinging from left to right. How low can you go? Really. Toilet humour. He only showed me this seconds before we headed out the door. He knew my thoughts on such things. I decided to go with the flow and laugh about it. 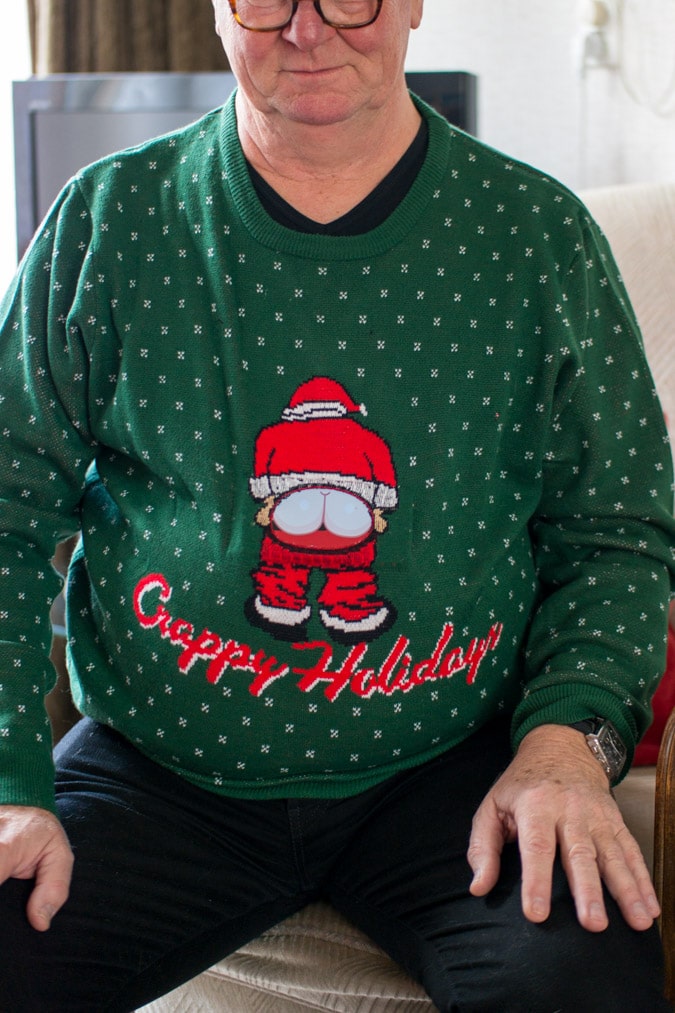 Below: Failing of course, but trying to restore a little decorum here. (Nicky has one rather splendid purple wall in her living room with a big mustard yellow couch in front of it. Daring. And I like it a lot.) The skirt is part of a suit which is rather difficult to style. The silver/golden boots you have seen with a cream tunic and jeans and with a green jacket and black pencil skirt. 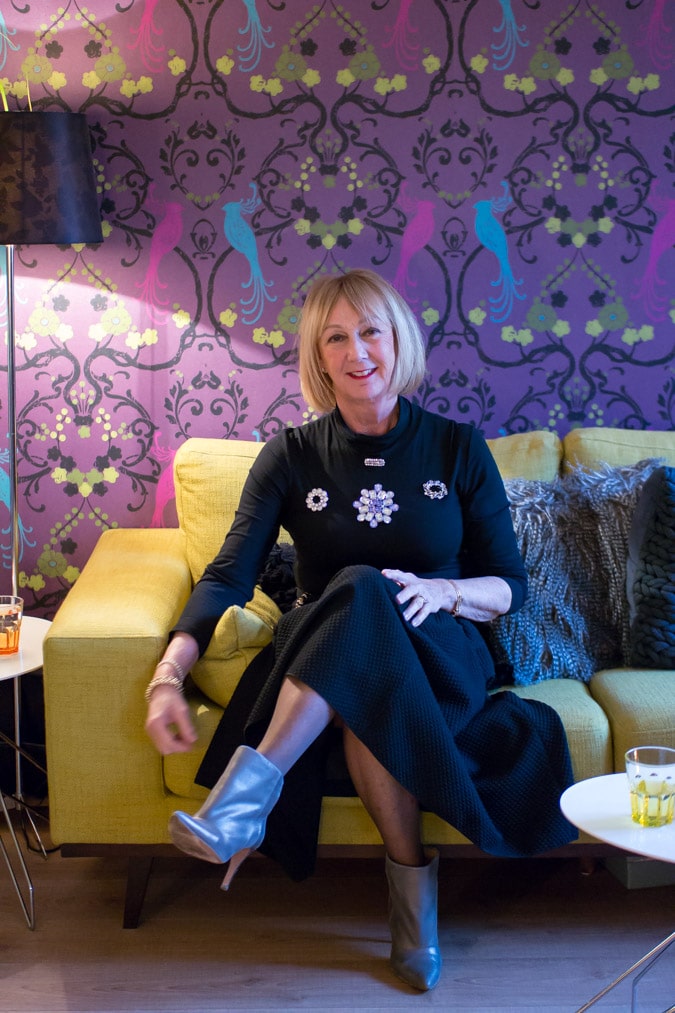 Below: Details. Recognize “The Paris necklace“? 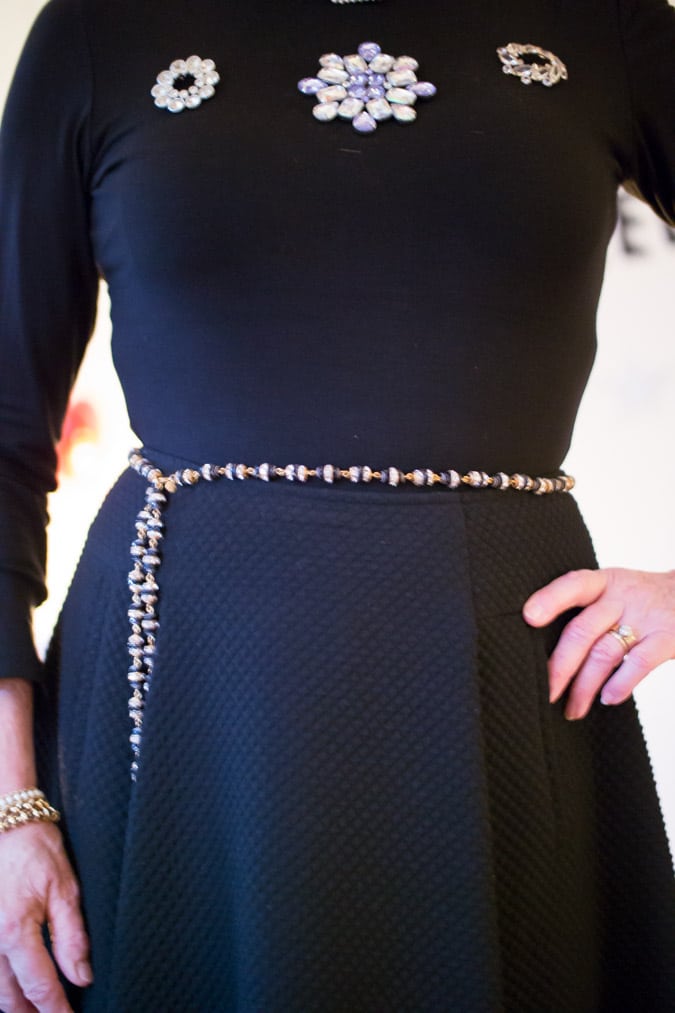 Below: The reindeers on Nicky’s head are competing with the birds in the wallpaper. 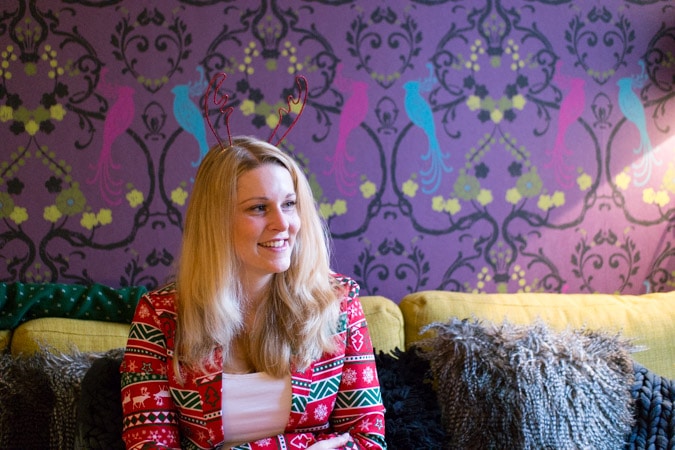 Below: Boyfriend being nice. (He is a really nice guy, good sense of humour too.)

Then the evening fell and we unpacked our presents before dinner. We had used an app for drawing a person to buy presents for. It also showed everone’s wishlist. One of Ron’s wishes had been: Long Blond Curles…. Santa complied and it had us in stitches for quite a while.

Below: With the hairnet still around the cheap wig. 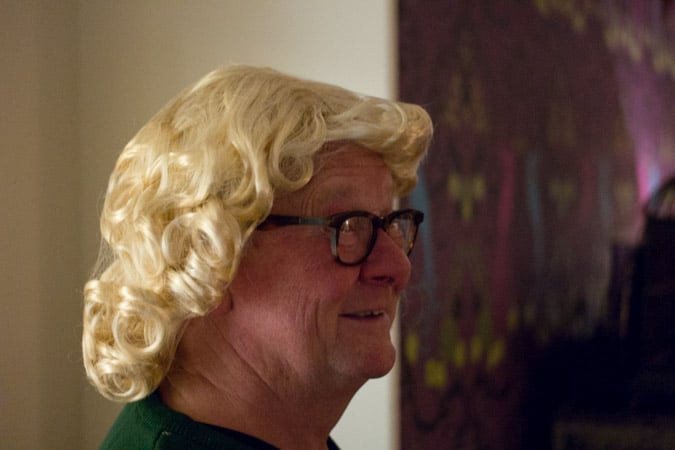 Below: With the curls. Actually, I think it suits him rather well. 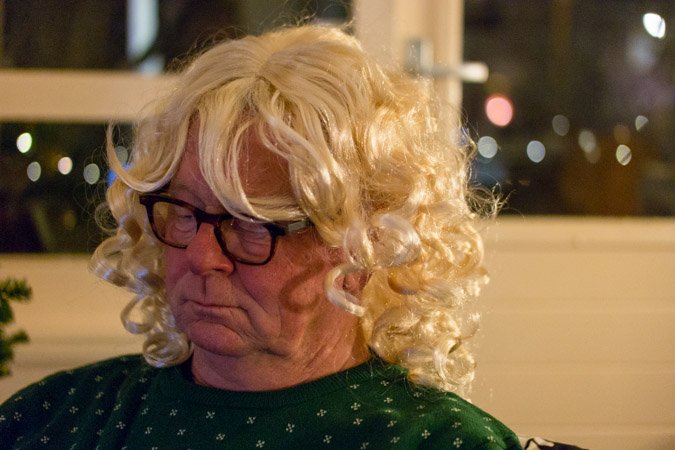 I haven’t got any pictures of the others on second Christmas Day. We were at the house of friends. Their daughter, her husband and their two children were celebrating Christmas with them and they invited us as well. Our friends cook like chefs. No chance of saying no to such an invitation: good company and good food. And all of them dressed in ugly Christmas sweaters. Ugh. To comply I put on the sweater at the top of this post and took it off after an hour. I just cannot do this.

Below: This is what I wore underneath the red sweater. Same recipe as the first day, only now with other boots and my wide trousers instead of the skirt. Sorry, grainy photo, the outfit looks almost grey instead of black. And I should have tightened the necklace belt. 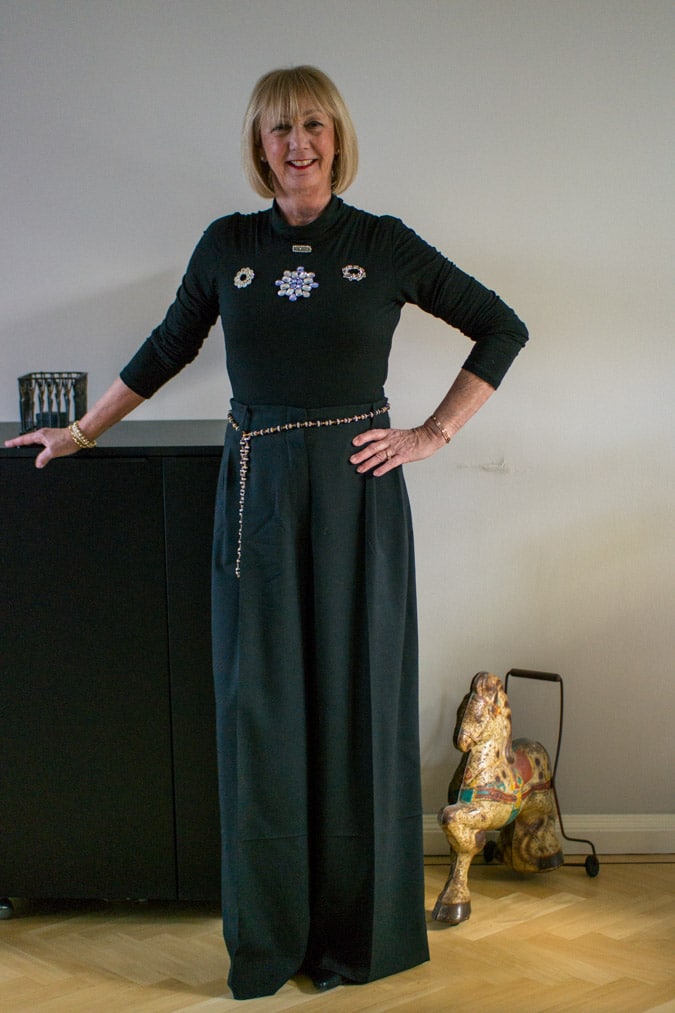 The food was really good but I do feel like a stuffed goose and am suffering from heartburn. I need exercise and less (rich) food. Never mind, I have spent Christmas time with the ones I love and who love me. Cannot ask for anything better.

Next week you will see a “normal post” again.