Saint Nicolas in The Netherlands 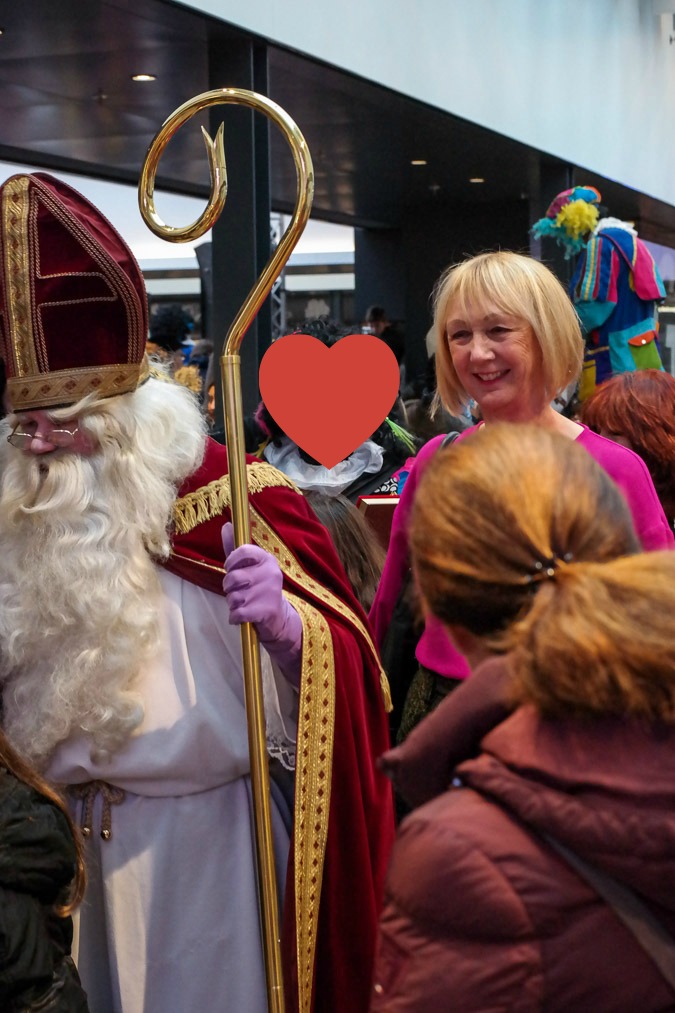 Saint Nicolas (Sinterklaas or Sint Nicholaas as we call it in The Netherlands) needs a bit of explanation.  It is a tradition from long ago. The story: a bishop, declared holy, called Sint Nicolas, gives presents to little children on his birthday, the 5th of December. He arrives on a steam ship (yeah.. right..) from Spain. And he has helpers who climb down the chimneys (….) to deliver the presents in each house. The presents are put in the shoe of the children who have placed them near the fire place (… in an appartment?). Children put a carrot in the shoe for the white horse of Saint Nicolas. It is a bit like Santa Claus at Christmas with reindeers. You can also read a funny explanation of this tradition on the site Stuff Dutch people like.

This is the good bit. Now the controversy, or better said, the battle which is going on around Saint Nicolas.

You see, the helpers of Saint Nicolas, called Zwarte Piet (Black Peet), were Moors in the old days. People now dress up as Moor by painting their face black (I know, really not done). This has divided our country for years. One part of the country says: “these helpers don’t originate from slavery, their role was equal to Saint Nicolas, so leave this lovely tradition alone”. The other part says: “the way these helpers are depicted is an insult to black people, they probably were slaves and we have to do everything to fight racism. This sets a bad example”. I am totally of the latter opinion. I know it wasn’t meant to be racist in the old days but that is most certainly how it is perceived nowadays. So away with it.

Now.. what is the outcome? Well, we are nearly there. We have had rainbow coloured helpers, but that didn’t seem to catch on (see this explanation on Stuff Dutch people like). There could be many solutions. For instance heralds instead of Black Peets and they could be red, yellow, white and black. Fortunately the majority is now against these black painted faces. Even the government has taken a stand and said this has to end.

Ron and I went to a shopping mall in Amsterdam (Gelderlandplein), where Saint Nicolas was to arrive (…). Great background for outfit photos and no wind, no cold, reasonable amount of light.

Below: The solution of the battle the day of our photo shoot was not to apply thick black make-up and big red lips, but to smudge the black make-up and no red lips. Explanation: they are smudged because of climbing down chimneys. This is such a Dutch solution. We always go for the compromise. (Update: in 2021 the helpers only have a few smudges and there are female helpers as well. We are getting somewhere.) 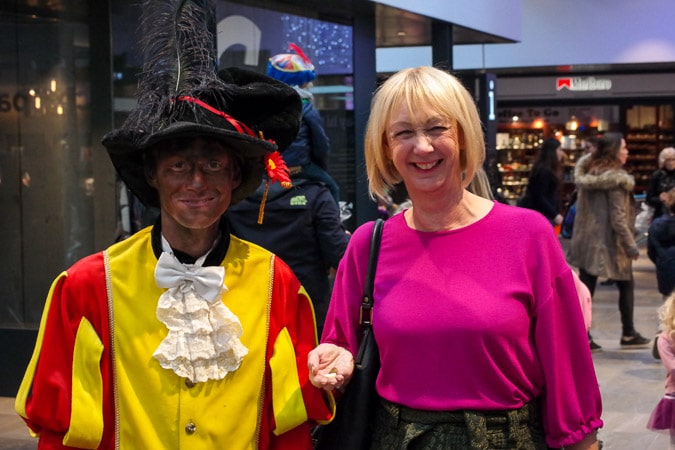 Below: For the children it is still very exciting and they love to dress up like little helpers. 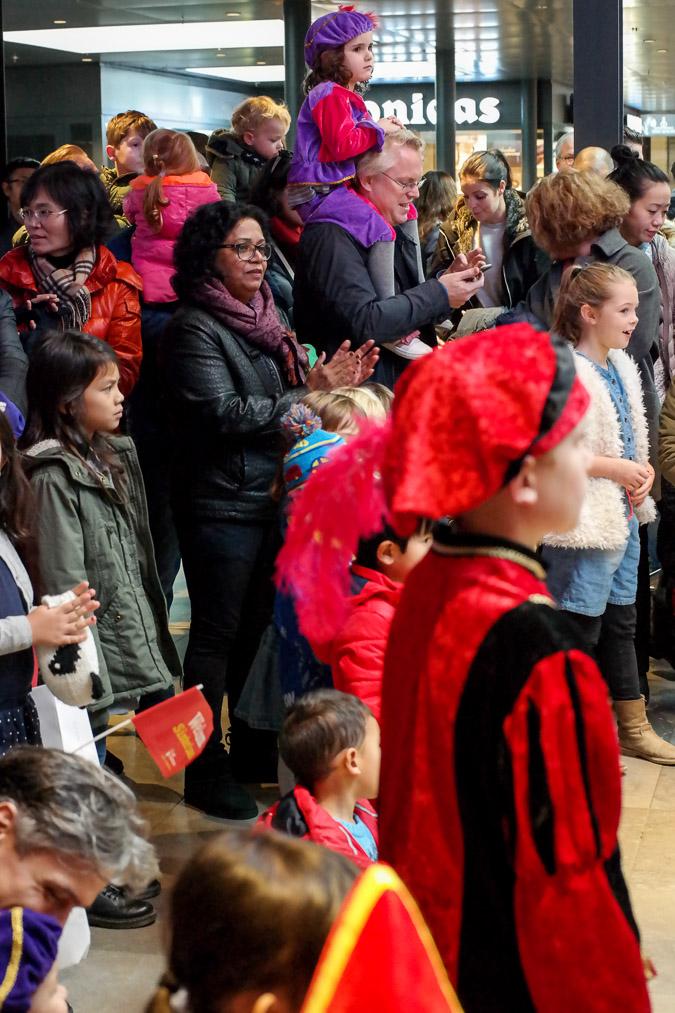 Below: Or like Saint Nicolas which is relatively new. I suppose that is the easiest way to avoid the conflict. 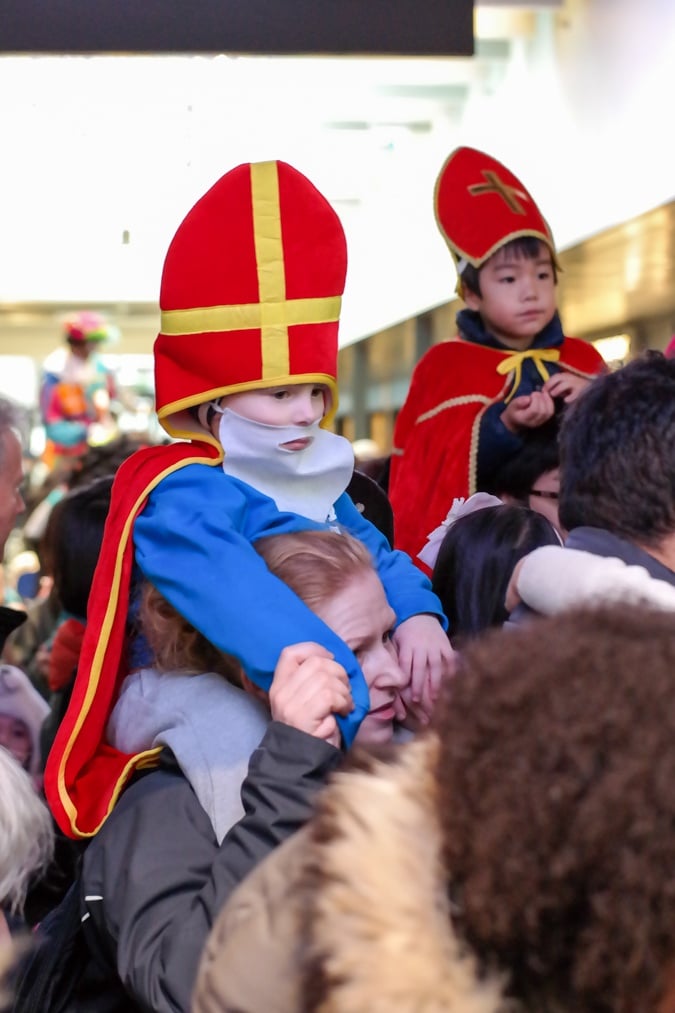 What was I wearing? To begin with a coat. This brown coat is very old, 10 years? More? I cannot remember. It is a classic and by Marella. The scarf is ancient, about 25 years old.

Below: Looking a bit strange haha. Bag is Longchamps and boots are Hugo Boss (at least 5 years old). Yes darlings, I do wear my stuff more than once. Although my husband says I do not wear anything more than three times. Not true. 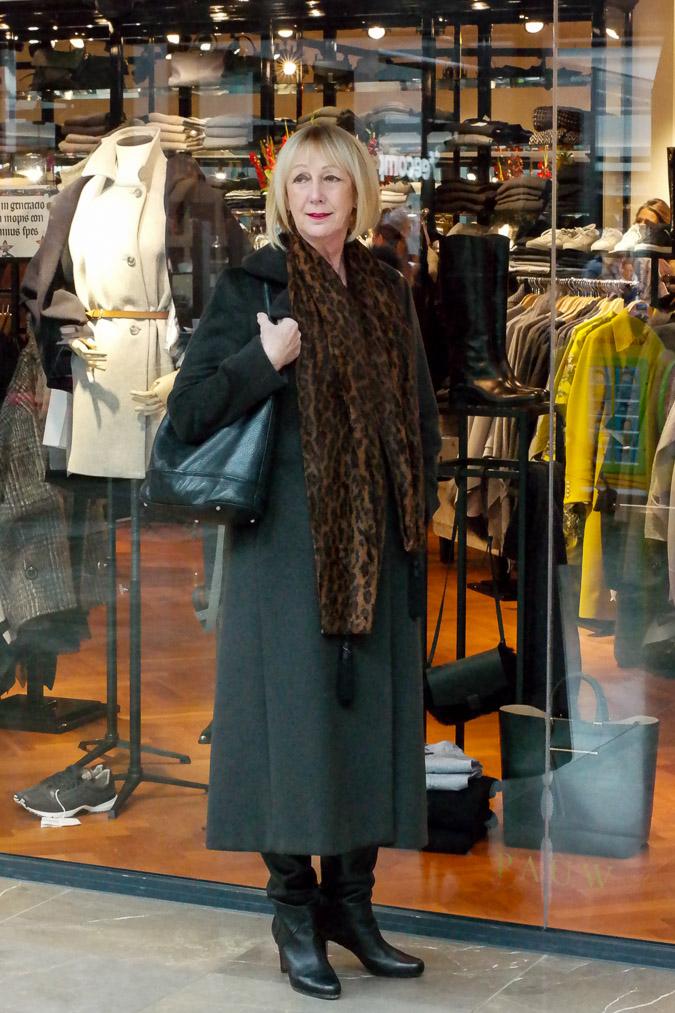 Soon I took the coat off as the temperatures were lovely in the mall.

Below: This is what I was wearing underneath. Top and skirt by Essentiel and opaque tights by Wolford. The skirt has pockets which seems to be a big thing with many women. Personally I couldn’t care less whether a dress or skirt has pockets or not. 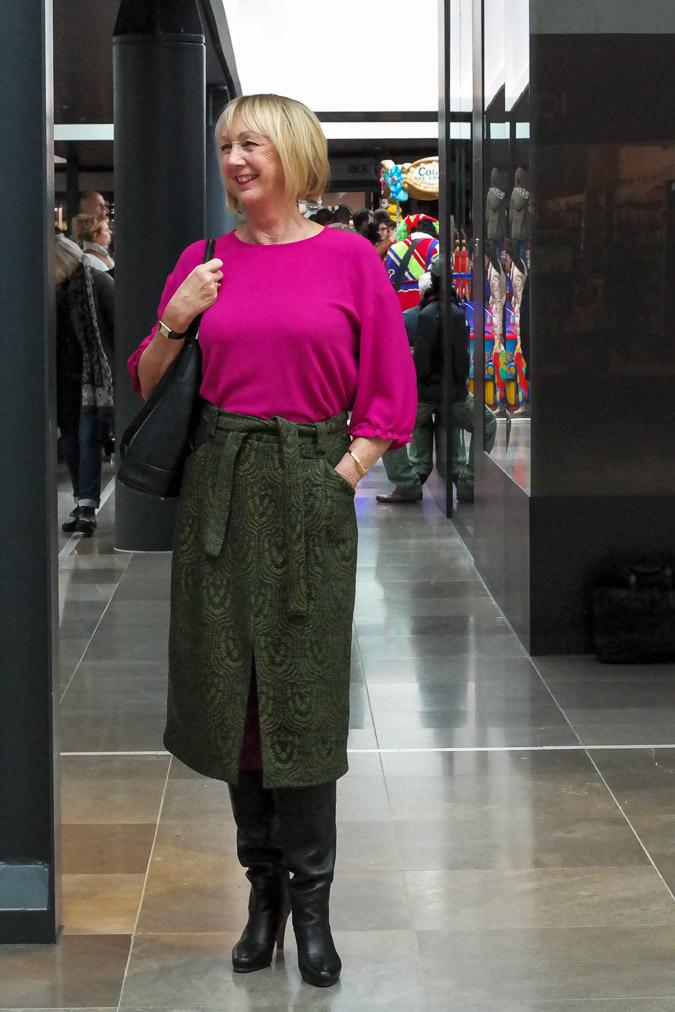 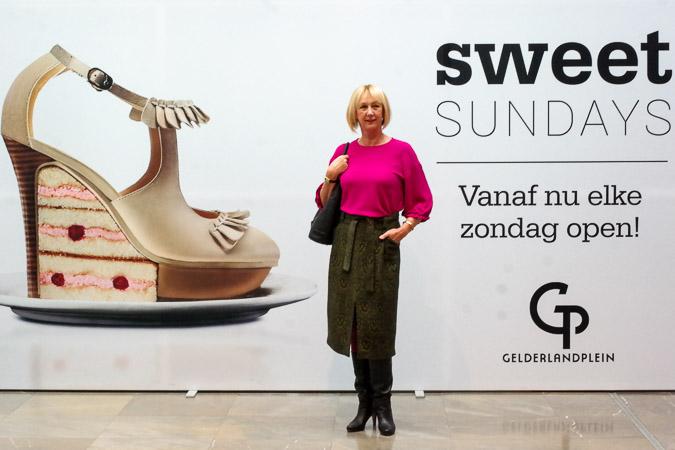 Below: Black and grey and beige are such popular colours. Brrr. 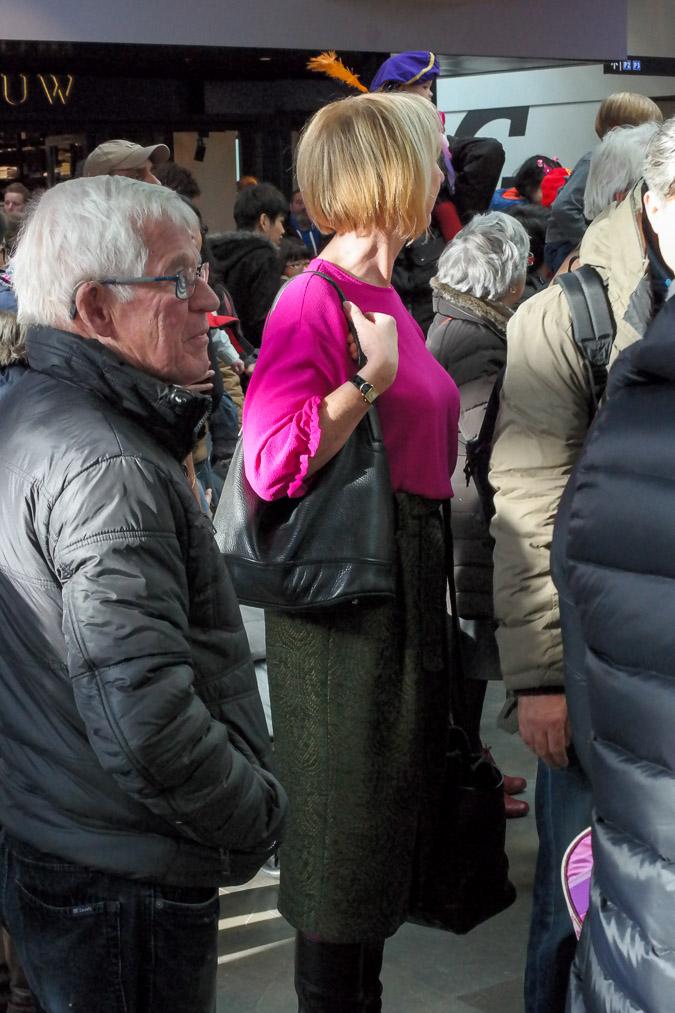 Below: Saint Nicholas’ helpers throw (and give) candy. This little fellow was optimistic and took a big bag with him to take the loot of candy back home. He is checking how much he has been able to collect. 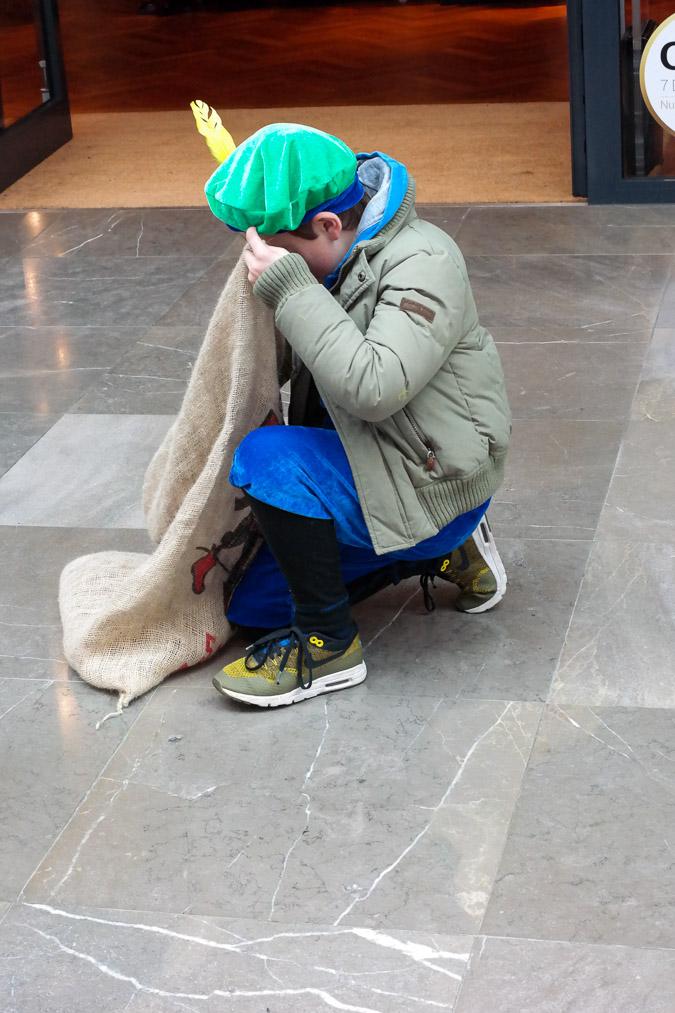 Below: These little children were adorable. See the ice skating “rink” behind me? With chairs to hold on to. 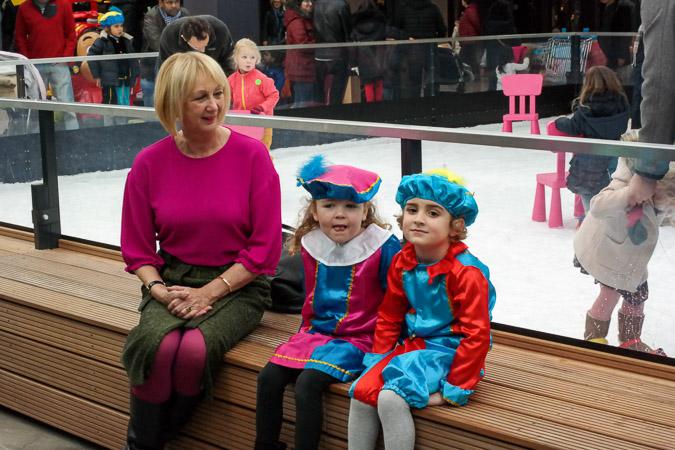 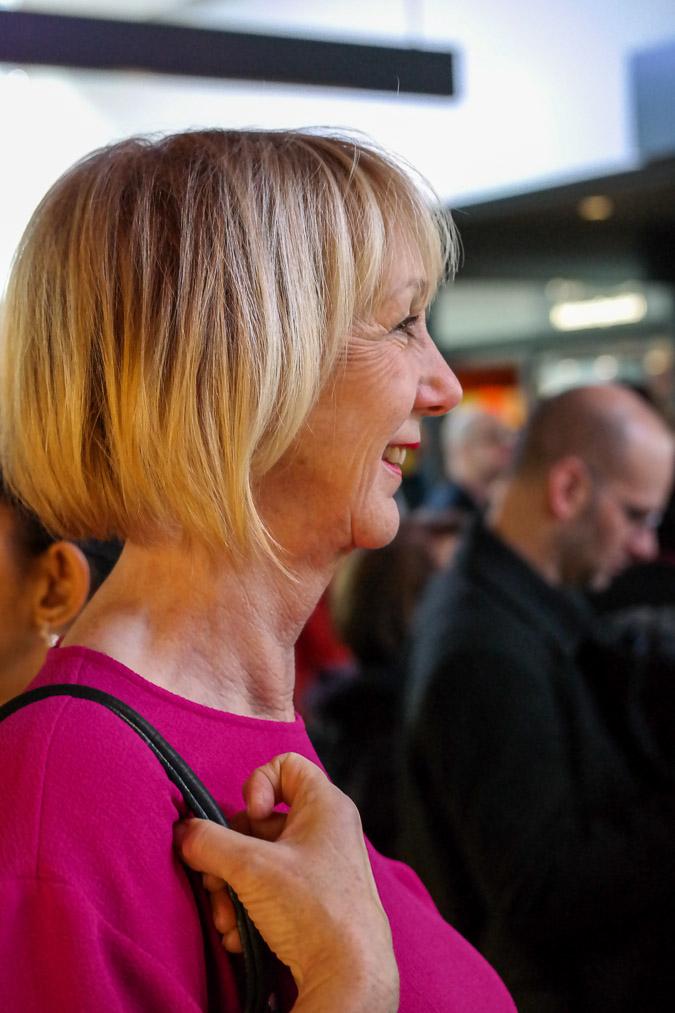 Below: A shopping cart as art piece. 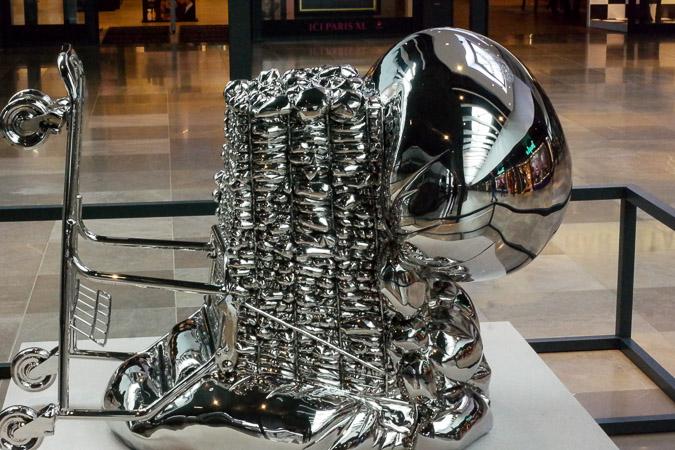 Below: Different styling of the top. A rather distorted iPhone picture. I just learned that you have to put your camera lower, facing upwards, otherwise you get short legs. Whereof deed. You saw the necklace before in this post. And the Eijk boots in this post. 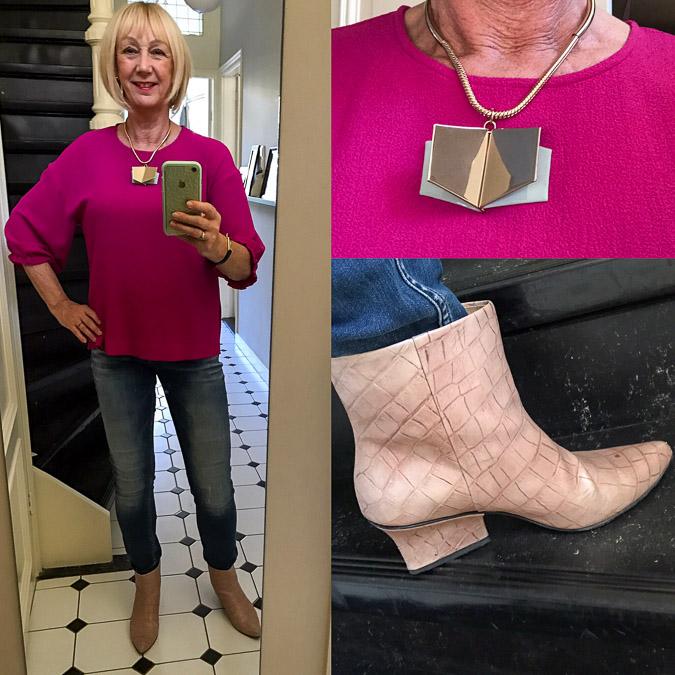 Below: And another iPhone picture. My ancient scarf, now worn with a black coat and brown boots from the Max Mara outlet (you have seen them before). Together with the messenger bag they make a nice outfit. 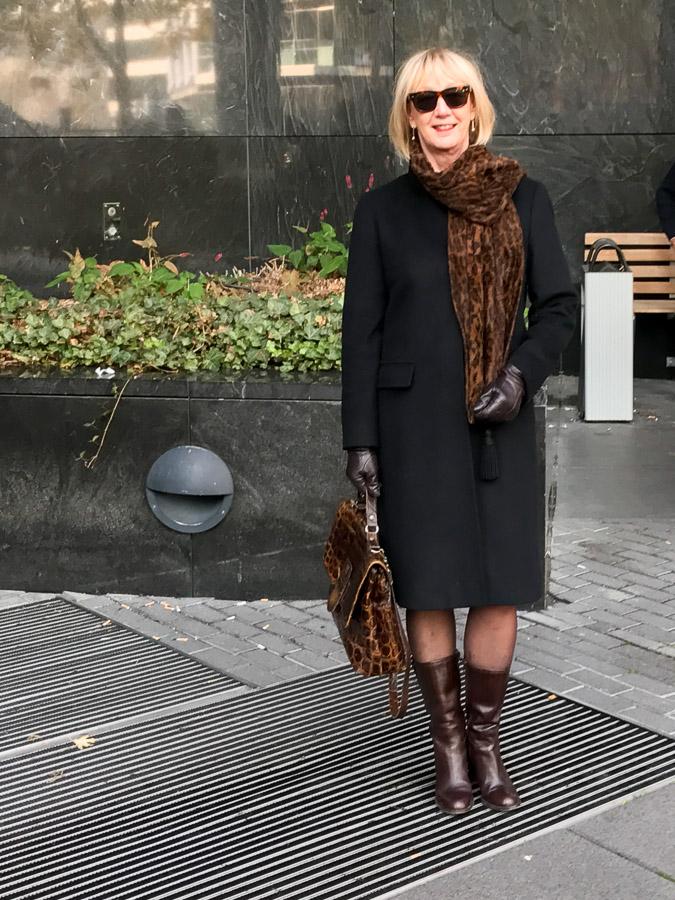 Thanks to Ron, we had a little adventure to report about. Remember to check your shoe on the 5th of December to see whether there is a present in it.