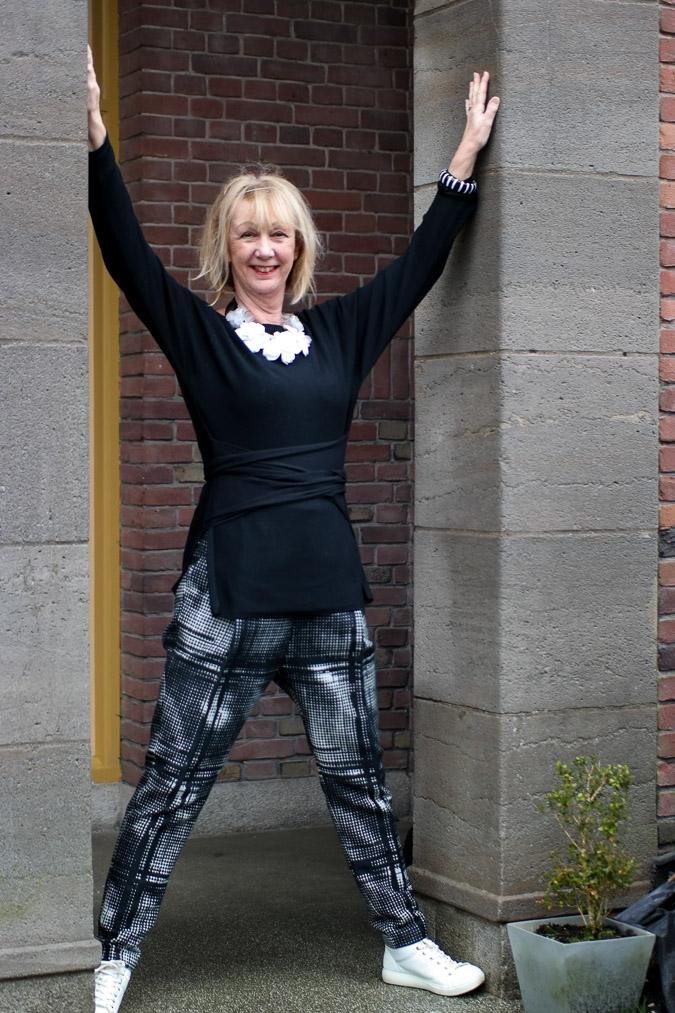 Certainly a different pose, don’t you think? These black and white trousers were on the blog only one time before: when I went shopping with my friends in Antwerp. They are by Hope and the most comfortable trousers you can think of. Crotch hanging low, lots of room around tummy and hips, nice and warm. All lovely things, but one… these trousers are wool. And wool make me itch. Got that solved though.

My seamstress made a pair of trousers in a similar shape from black lining material, which I wear underneath. Smooth and you don’t feel it. Clever thing is, I can use the lining with other wool trousers as well. Not that I have other ones, but that might be different tomorrow.

Let me start telling you about a shoot gone wrong.

A roadbridge is being built 2 minutes down the road; lots of pipes and steel. A prefect background in the eyes of my dear husband. Such a site is closed off, only to enter during week days before 4 o’clock p.m. (otherwise the builders have gone home), if and I repeat, IF, you get permission.

With the real threat of me having to wear a steel cap in a fashion shoot, we entered the site, asked around, got offered coffee while waiting for the foreman to come out of a meeting. The meeting took a while and didn’t seem to end soon, so they told us. And advised us to come back another time. No background, no shoot, no photos. These backgrounds aren’t always easy, you know. We emailed later, but didn’t get permission. Safety rules. Too bad.

Below: these gentlemen, safe in their protective gear, didn’t mind posing for my blog. I say they are naturals. 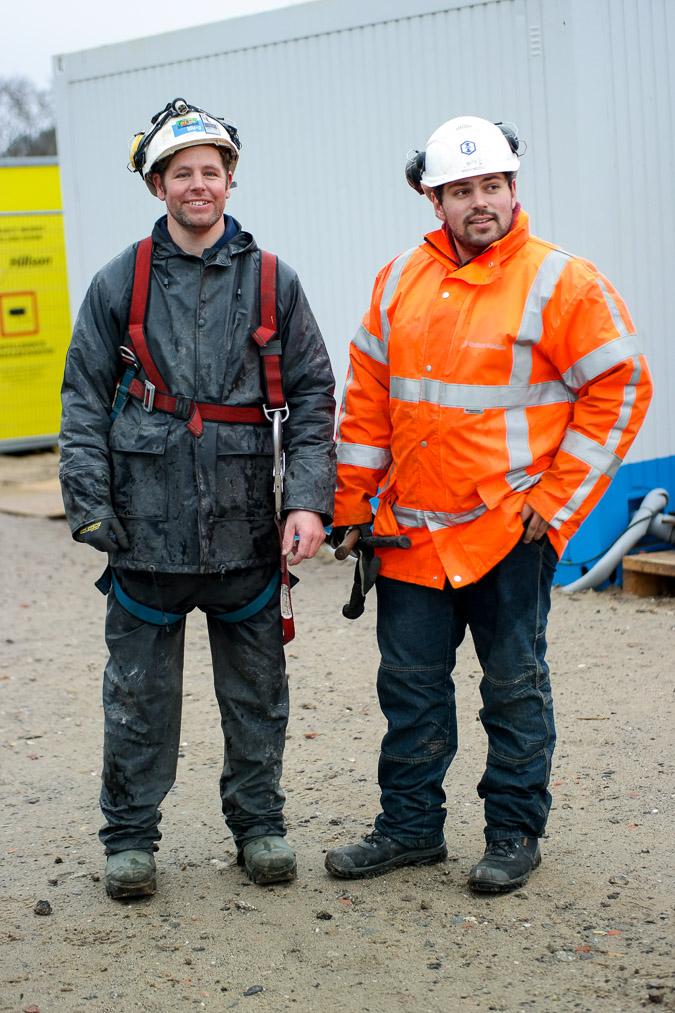 On our way home (me being rather discouraged and sad as I had no material for today) we passed a building which used to be a swimming school, now converted into appartments. A beautiful building. We were in a hurry (dog had to be picked up), it was cold and the camera didn’t cooperate. All these things led to blurry, out of focus photos. Plus, while sorting the photos, I discovered I had put on the sweater the wrong way and had forgotten the belt.

Which is why this is not the best post, actually rather boring. Just think of it this way: no highs without lows. Today is your low giving you something to look forward to next week. I hope.

Below: new pose against a post. By the way the white stuff in the front is gravel not snow. 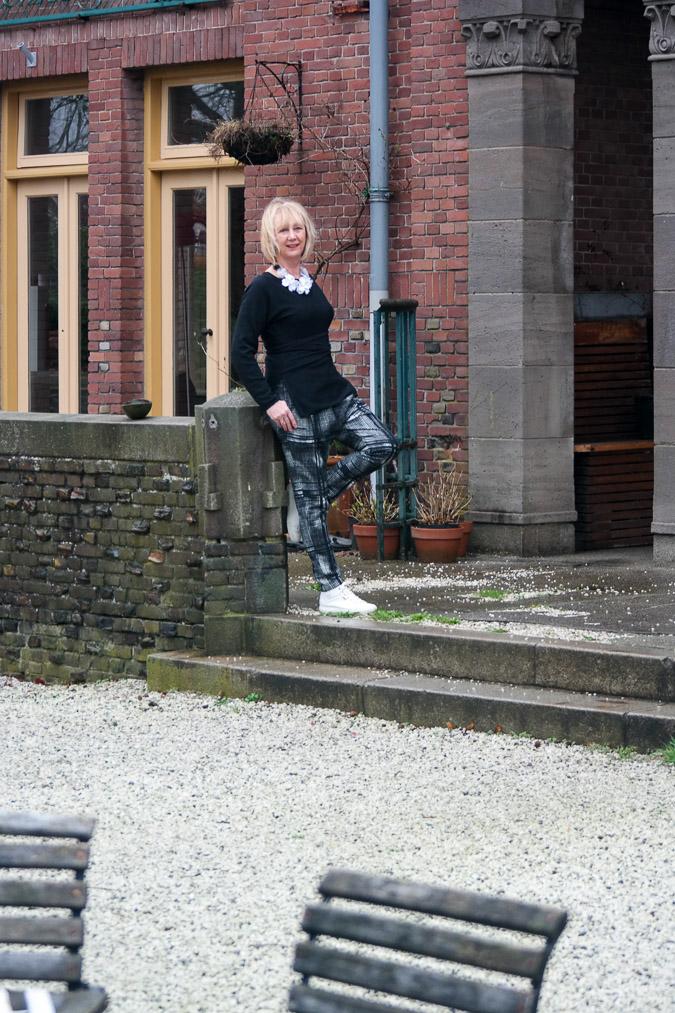 Below: changing pose, adding bag. Told you it was boring. And blurry. You thought I was pulling your leg. Not so. 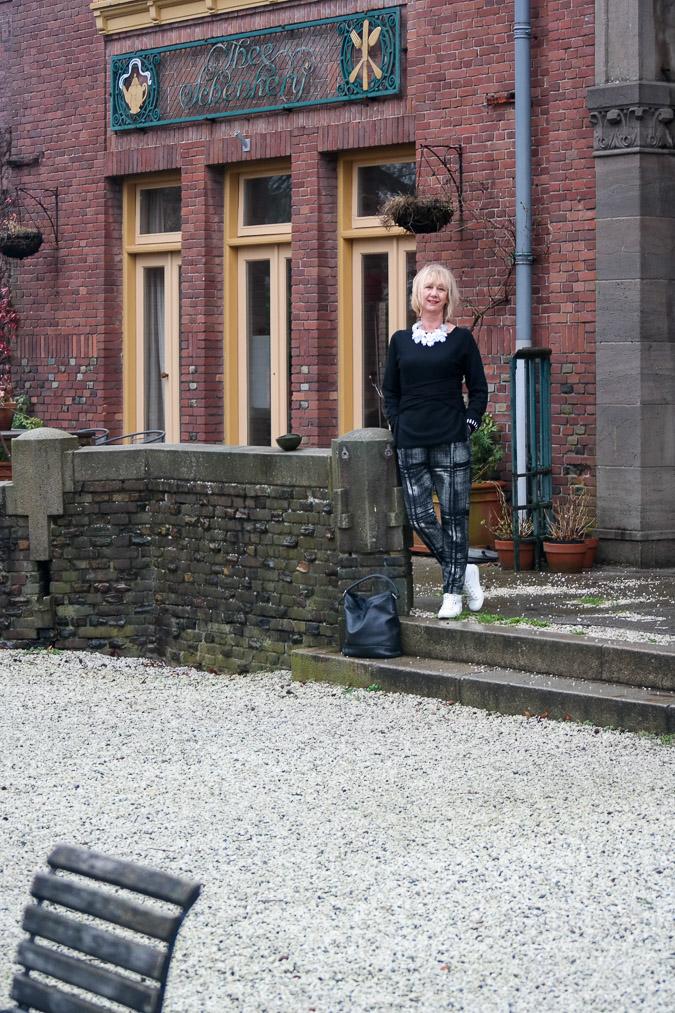 Below: a closer look at the signs on the building. Tearoom. 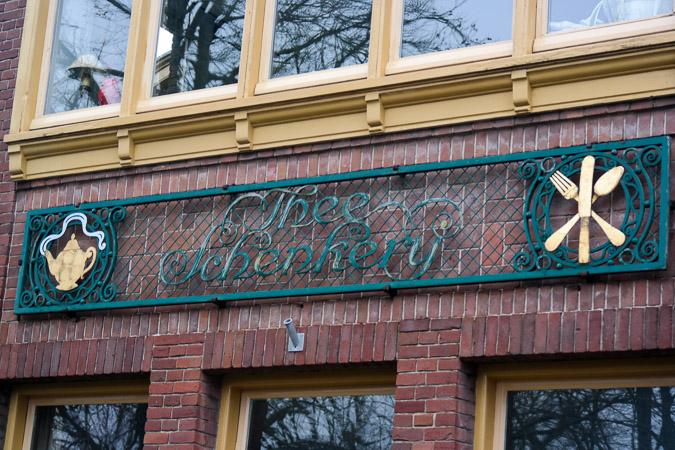 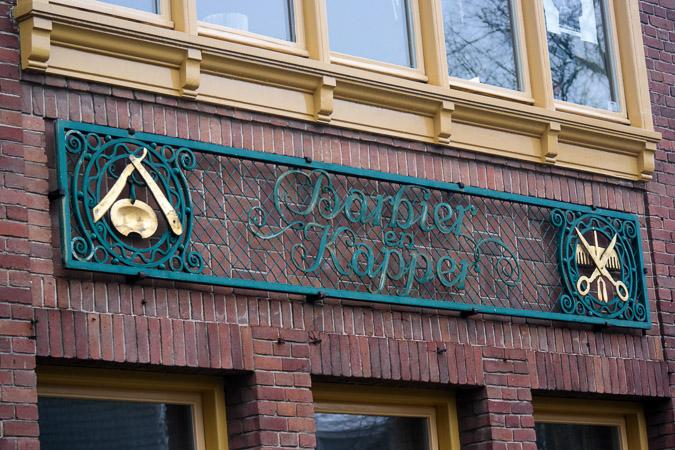 Below: that was a sweet shot. 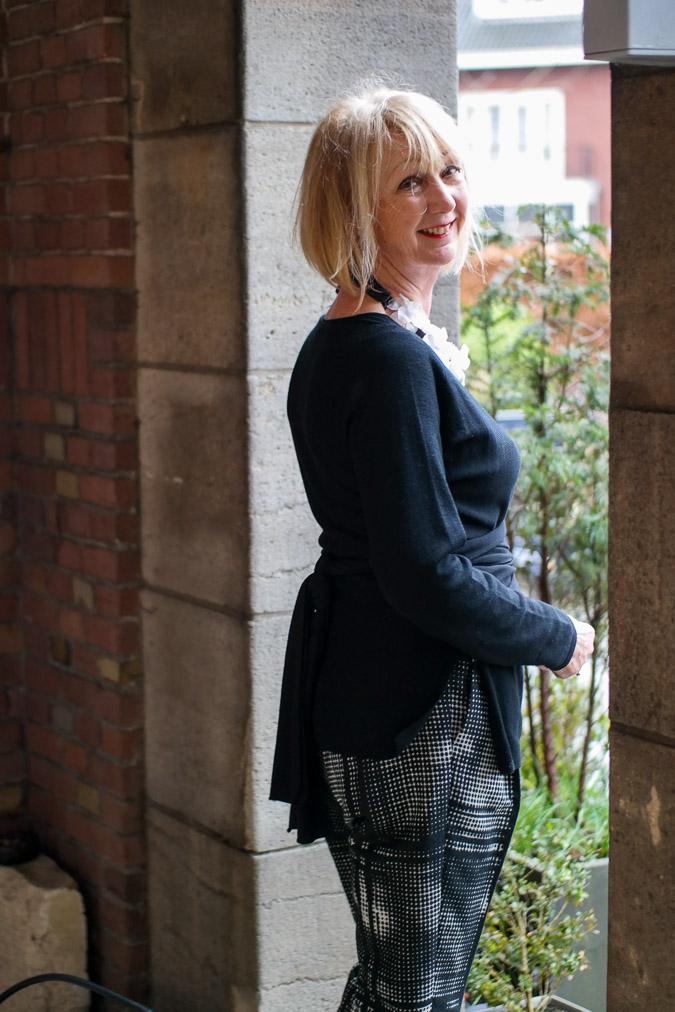 Below: this is the head-to-toe shot. Both sides of the sweater have a long “flap”. You cross them at the front and knot them at the back, as you can see above. 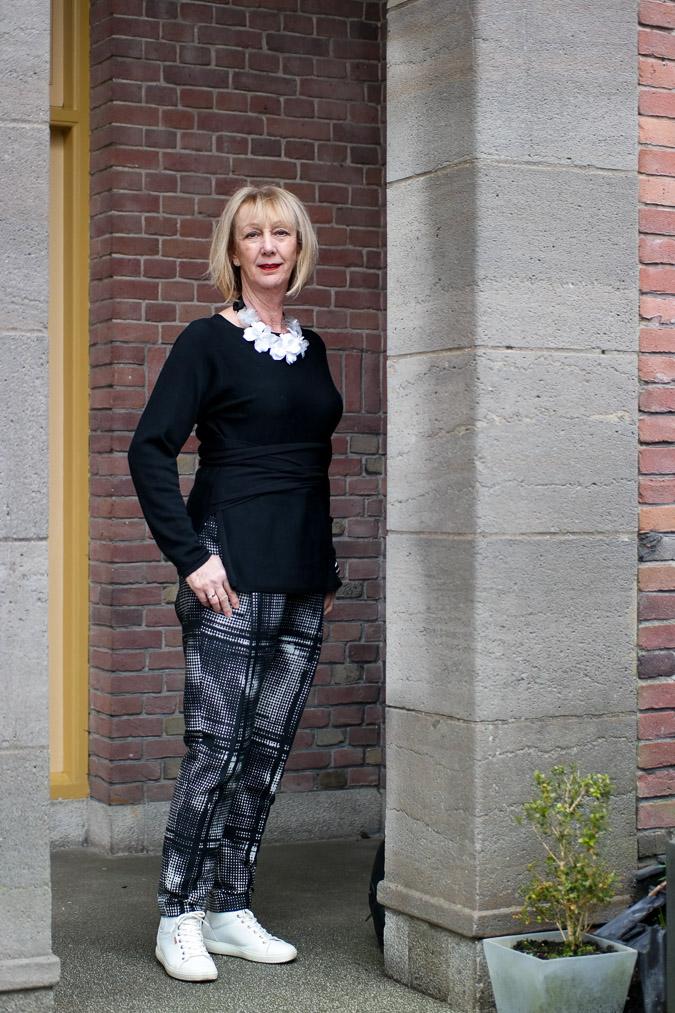 Below: from the side 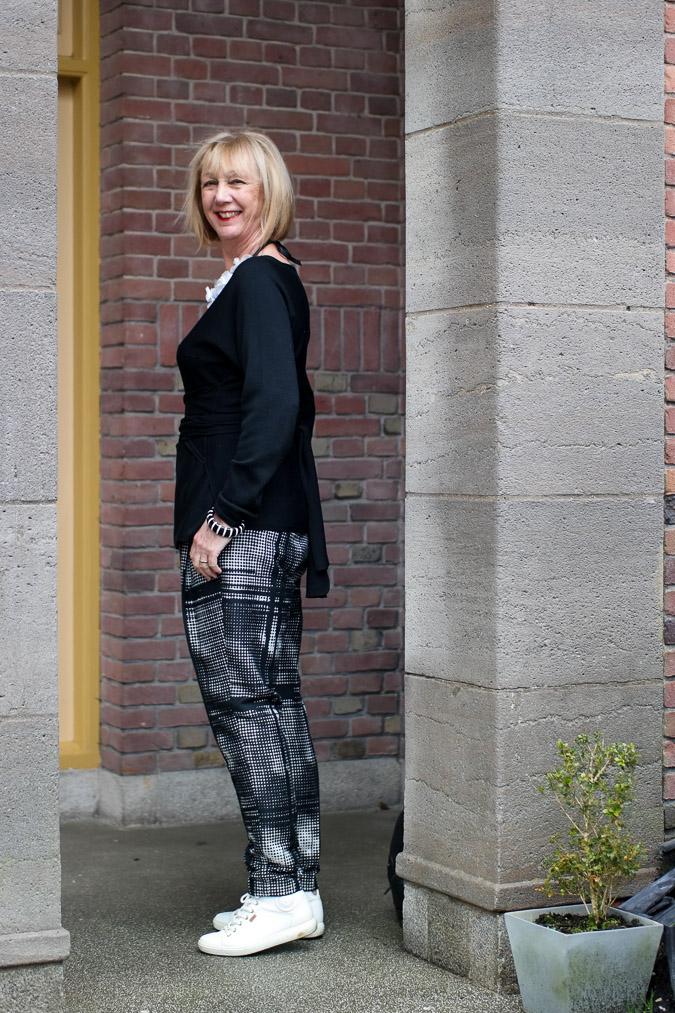 Below: bracelet by Bella from her Etsy shop: Citizen Rosebud. Necklace is a present from Anja (Curly Traveler), which she brought from Asia. 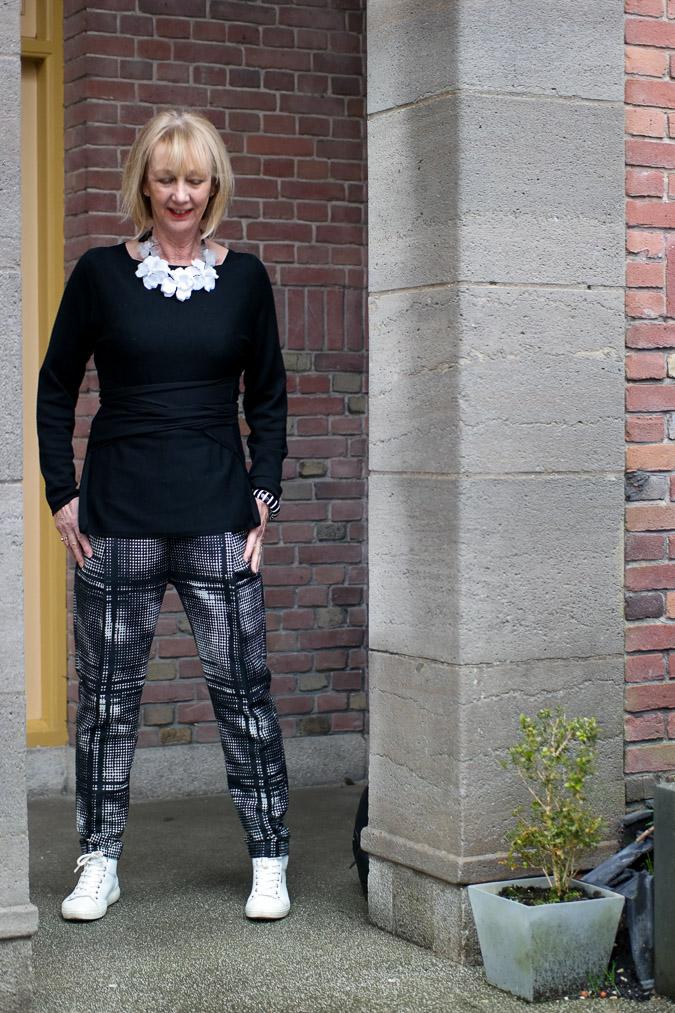 Below: a closer look at the necklace (I photographed this for a change). The two flowers at the end aren’t white but milky transparent. I think it is gorgeous. You have seen it before in this post with Sylvia (40+Style) and Anja, wearing my green silk kimono top. 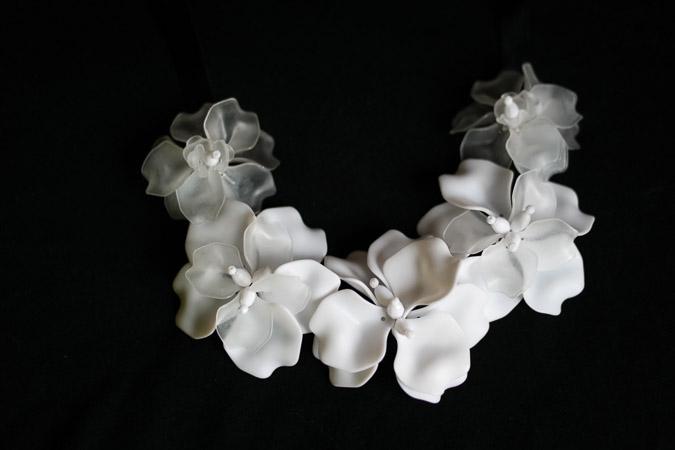 Below: this is how the outfit was supposed to look. With the sweater IN the trousers at the front. (I have already published this on Instagram.) 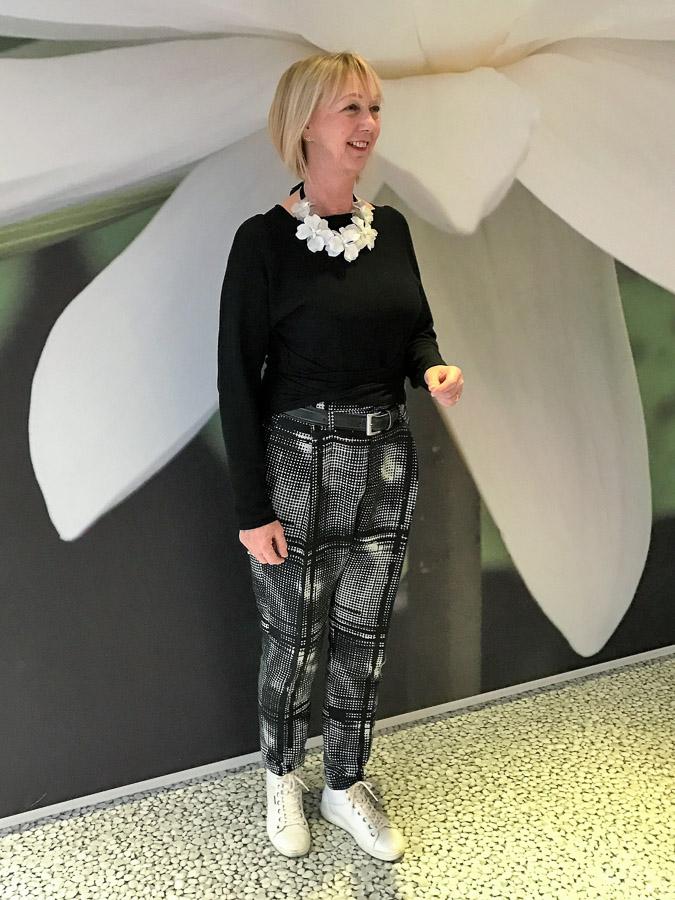 Below: and the sweater out of the trousers at the back. 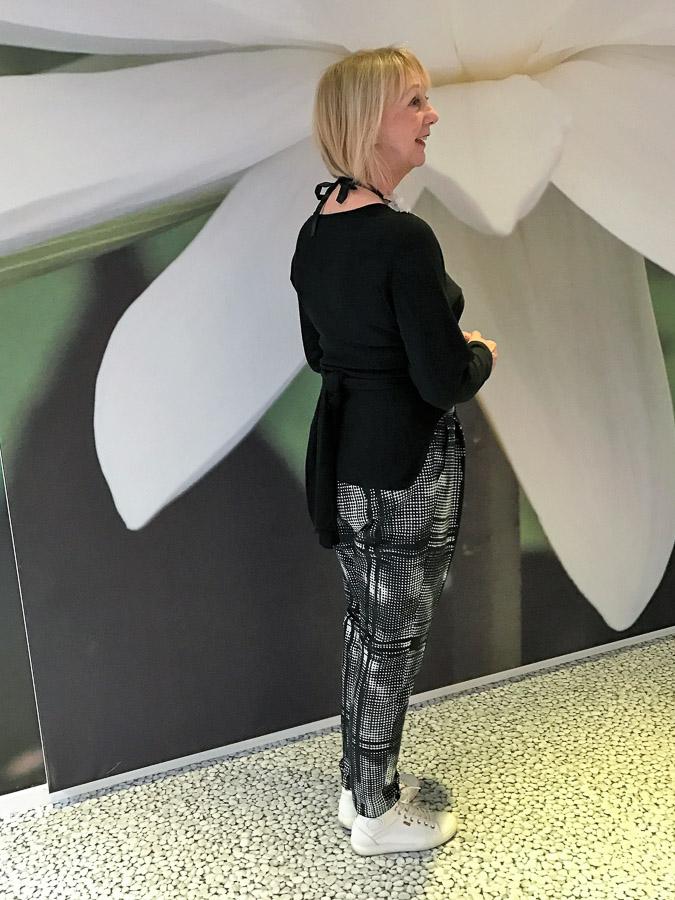 Below: I have put both styles in one picture. And I bet you have a preference for the left photo. Now that I see all the photos I think the proportions on the left are better than on the right. Just goes to show. 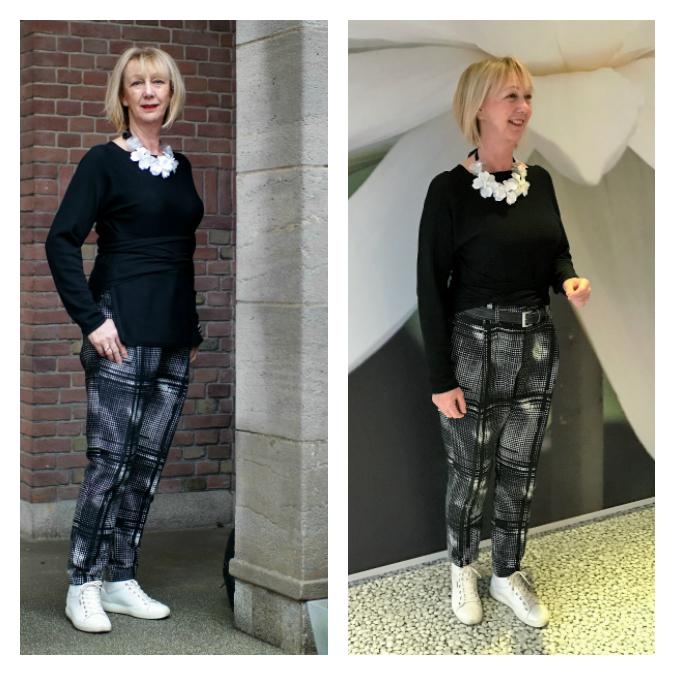