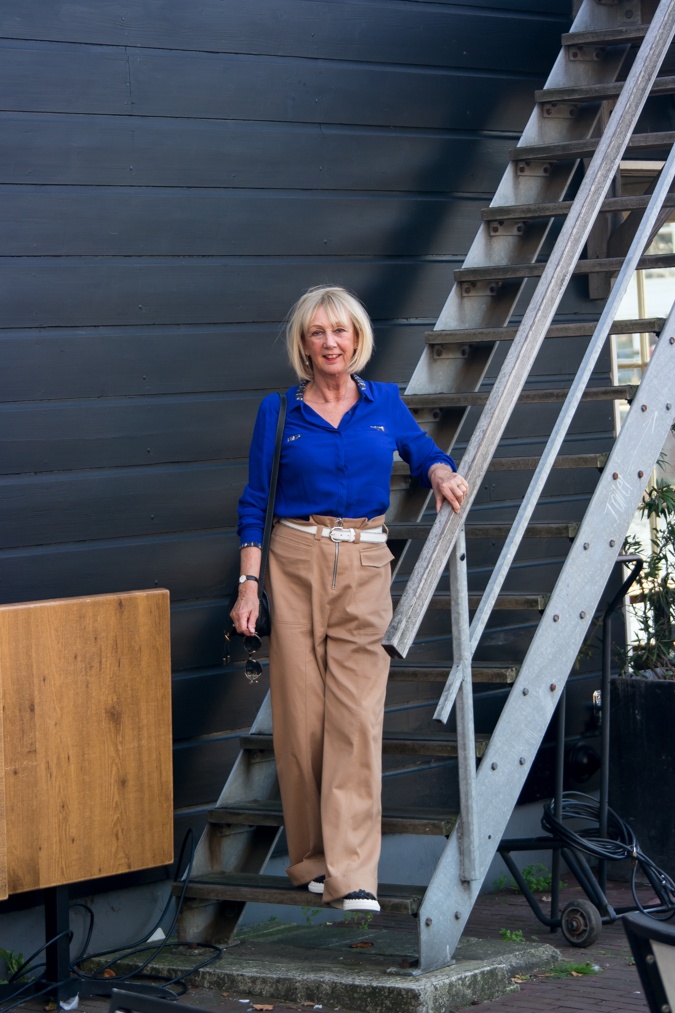 Unbelievably warm for the Netherlands in October. These khaki trousers are supposed to be for spring and autumn yet I was quite warm wearing them. Ron (husband) and I decided to hit a terrace in Haarlem for cappuccino on this lovely and warm Saturday morning. We chose restaurant Zuidam, for its unique location near the river (called Spaarne) and near a working windmill in the centre.

Quality time! A few months ago I had expressed my concern to Ron that we were living quite separate lives. Happy lives, but still… shouldn’t we spend more time together? Ron only needs one remark like that and he takes action. He now goes out of his way to spend quality time with me. You already knew he is a gem. 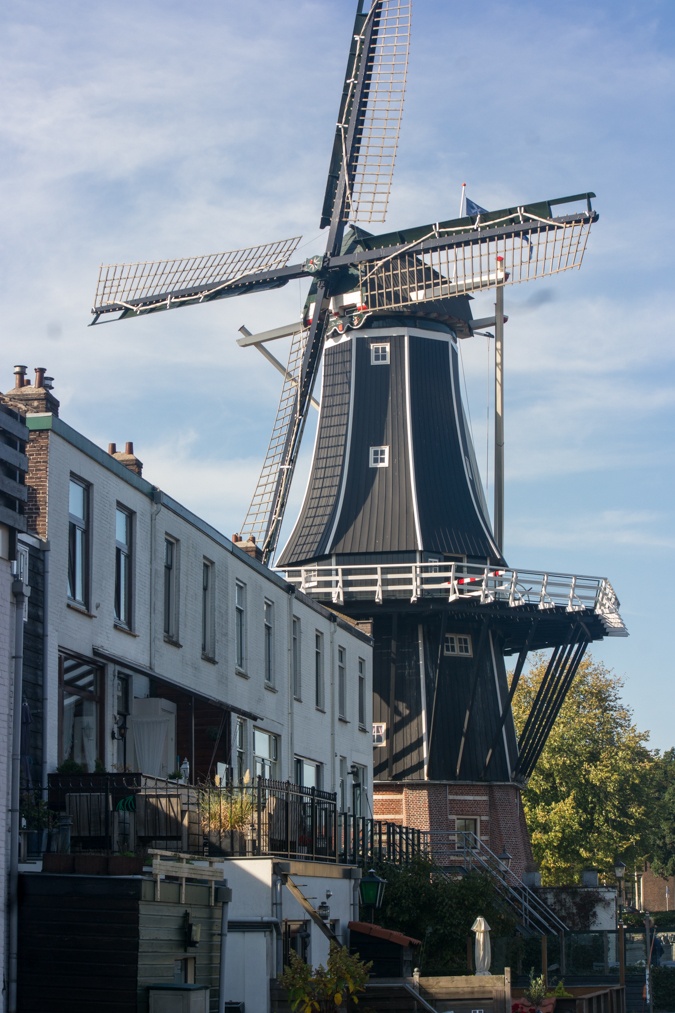 Below: When we arrived the blades of the mill were turning. 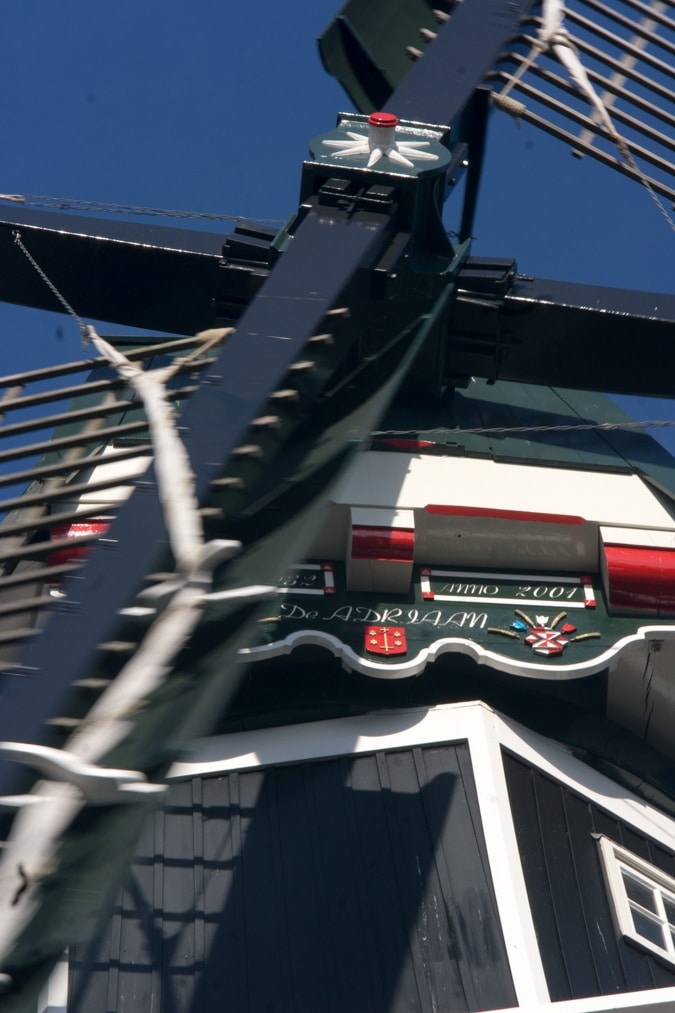 Below: I made a tiny video to show you how the blades were turning, carillon playing in the background. The business man who built his industrial mill back in 1778, placed it on the foundations of the old “Goê Vrouwentoren”. In this way the mill was elevated high into the air, well above the surrounding buildings and the turbulent wind, making production more efficient.

Below: Walking down this little street to arrive at the river (Spaarne) and the terrace of the restaurant. 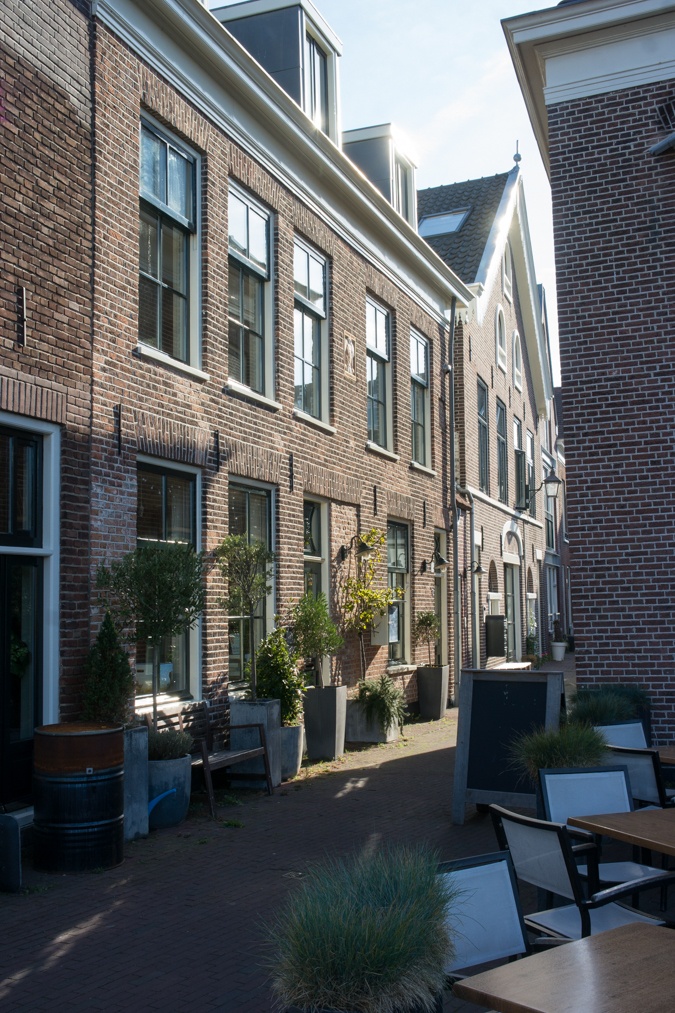 Below: It is so nice to just sit there, in the sun, enjoying our cappuccinos and later, our lunch. Watching the people and the boats on the water. 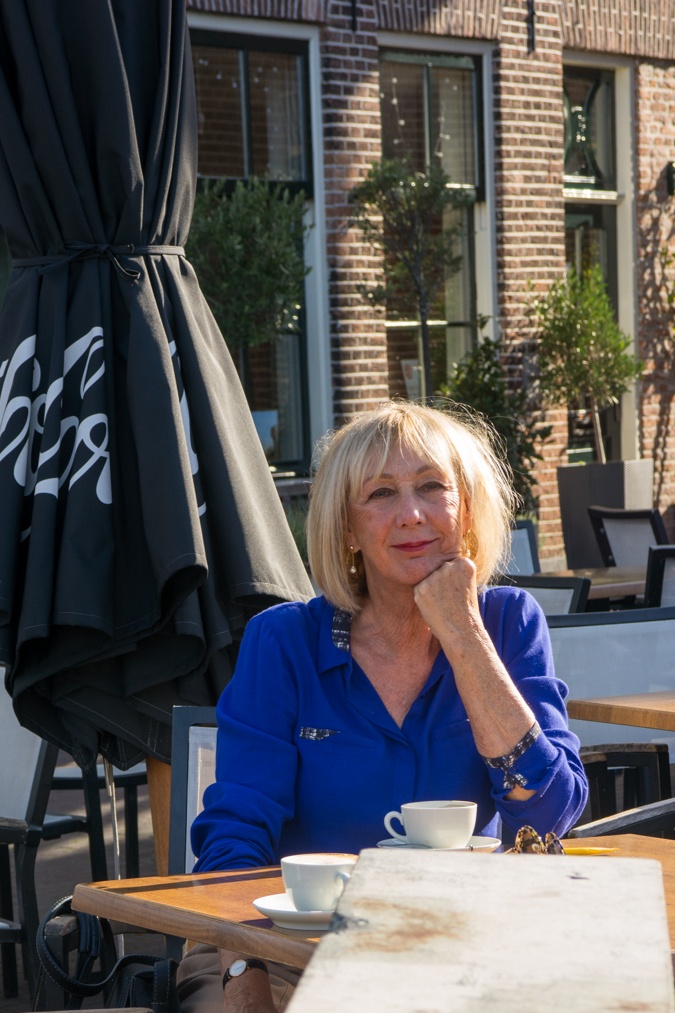 Below: Part of the view from the terrace. 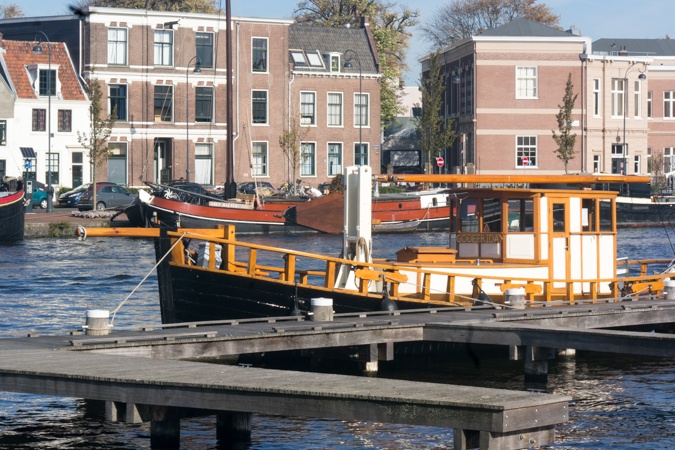 Below: The sight across the river. 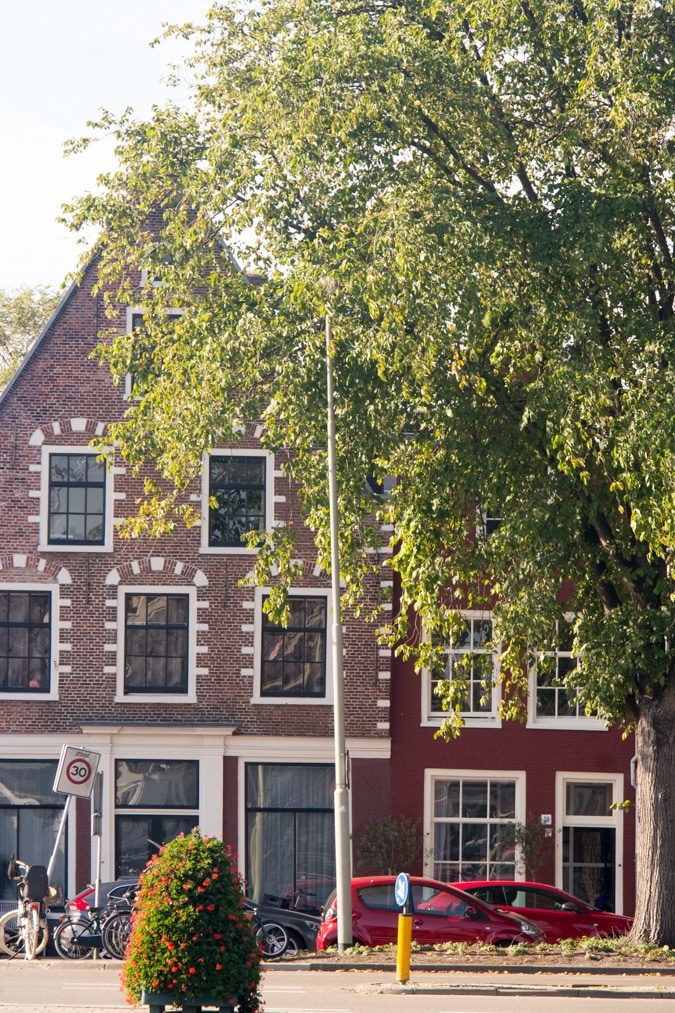 Below: Yes indeed, Ron took the photos again, bless him. He didn’t even get cross with me for holding on to something. We did the shoot in a calm and friendly atmosphere. The spot, the weather, the outfit.. it was all too good an opportunity to miss. And I feel embarrased to ask Kitty every week. Loes (my other photographer) is already scheduled but later this month. 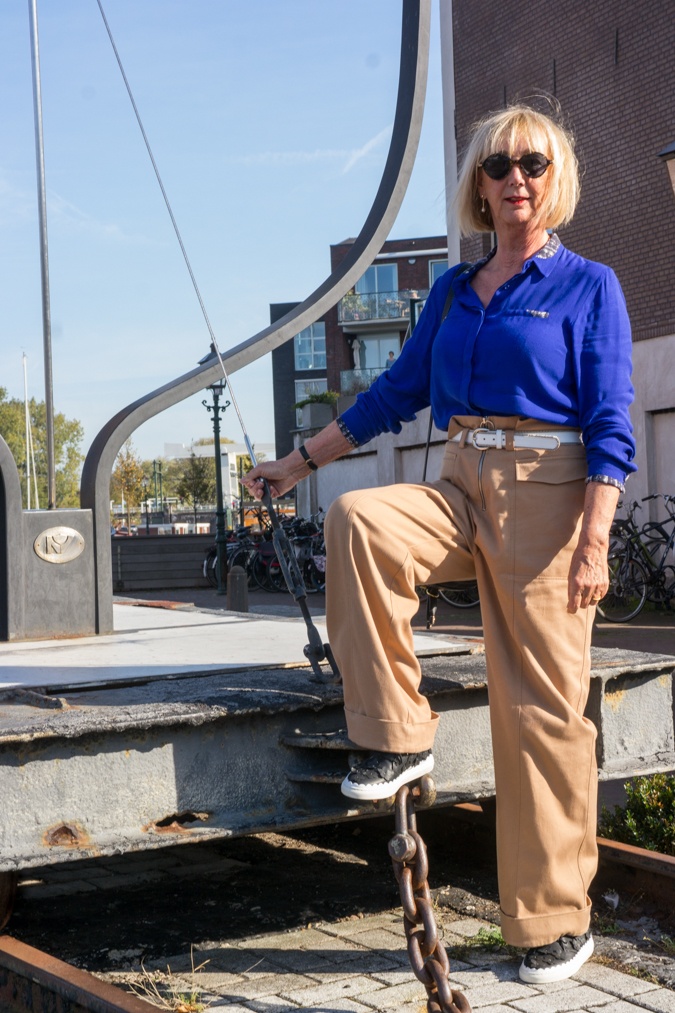 Below: I was trying to capture a cat with my iPhone as Ron had gone off with the camera. And he took this photo without warning. I HATE this posture. It is my normal posture, not my blog posture. A slump. I have tried to stand, walk and sit up straight so many times. My brains just cannot remember it all the time. Is there anybody who knows how to reprogramme one’s brain? 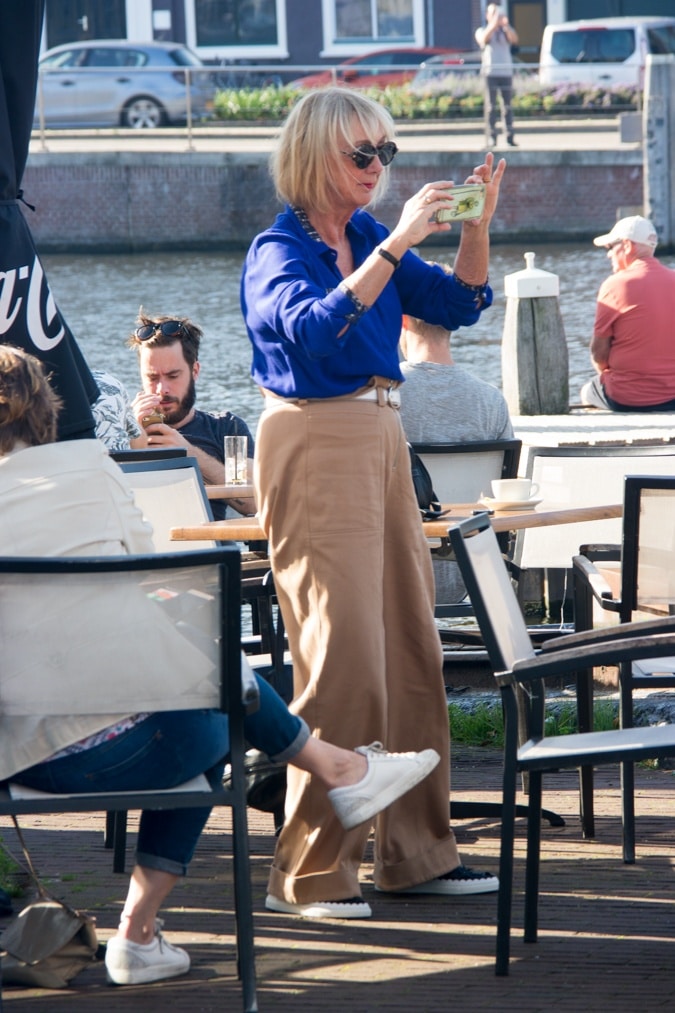 Below: The cat had jumped into a high plant pot with grass. She looks as if she is hatching eggs haha. Doesn’t matter whether it is a she or a he, cats cannot hatch eggs (this remark is for the smart asses amongst you). 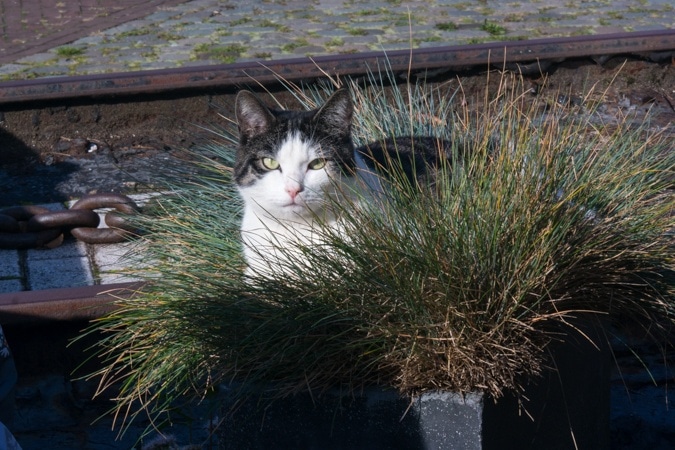 Below: Arty picture made by Ron: feather in a spider’s web. The cat played with it only to find out it was firmly “glued” to the web. 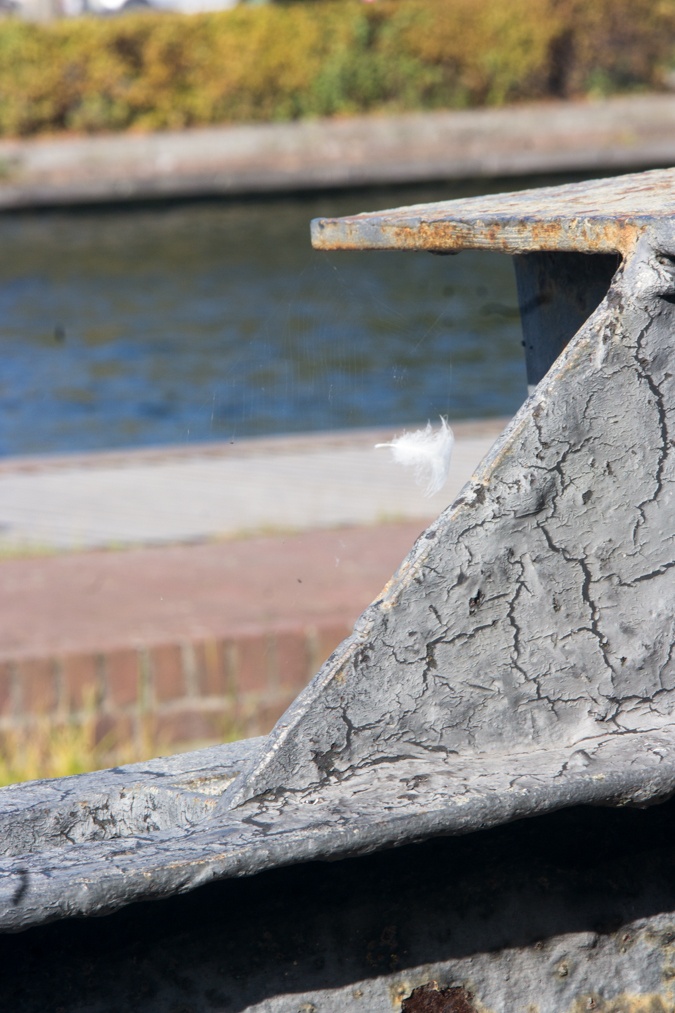 Below: We were not the only ones taking pictures. Tourist outfits. 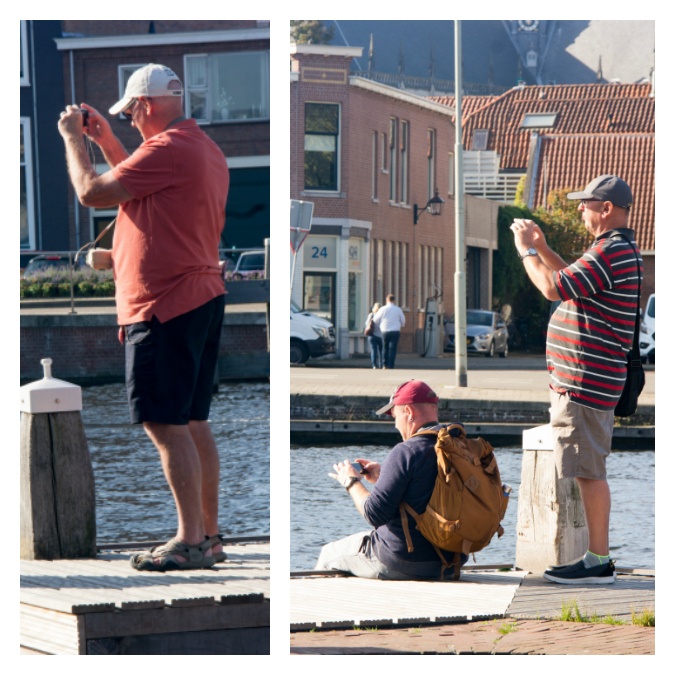 Below: The outside stairs to the toilets of restaurant Zuidam. (There are indoor stairs as well; you don’t have to go through the rain when nature calls.) 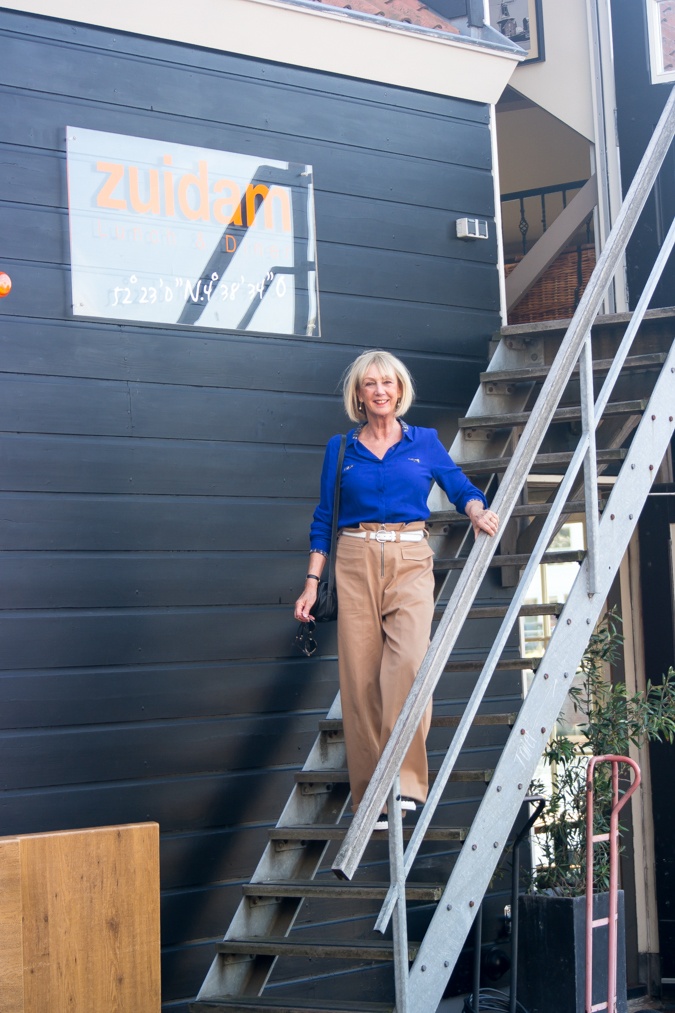 Below: OK, the outfit… Blue shirt bought in Antwerp a couple of years ago. (See it styled here with black and white trousers.) The belt is from Wynia (who now has a webshop) and you can see a close-up of the belt in this post. The khaki trousers are by Joline Jolink and first appeared on the blog in a post called Wide khaki trousers. 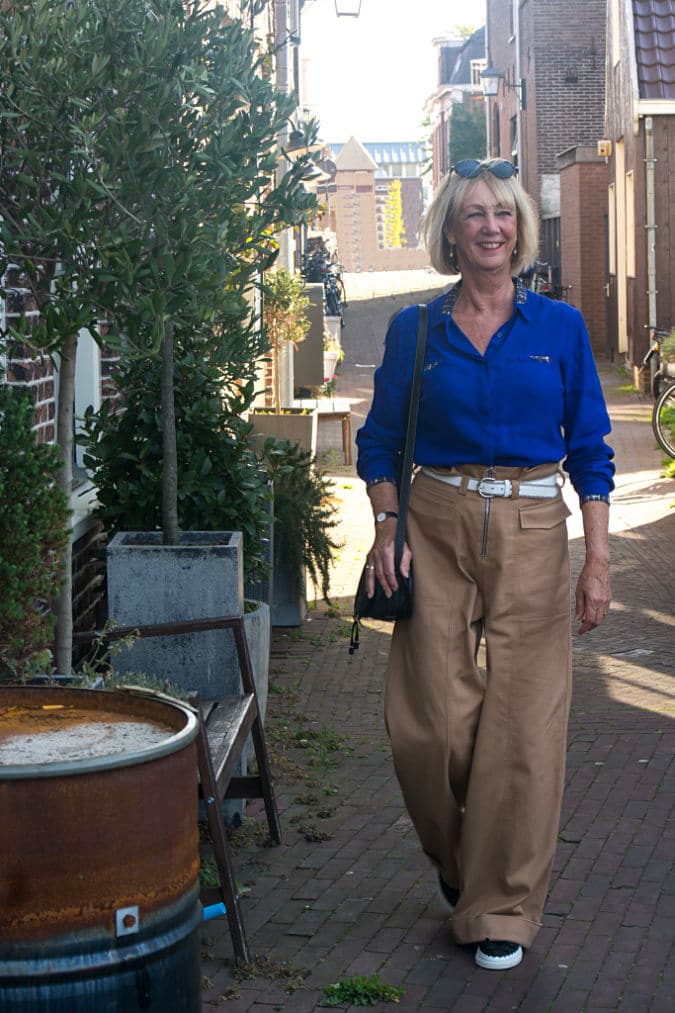 Below: The sneakers are new. Well, they are second hand and never been worn. Fellow blogger Michelle says there is a lot of new stuff offered in second hand stores and she is right. She is very good at buying sustainable. The leather sneakers are again from Today’s Vintage. Bought them the first time I visited them with Misja, Sylvia and Anja. Brand: Floris van Bommel. They have little cut-out flowers. 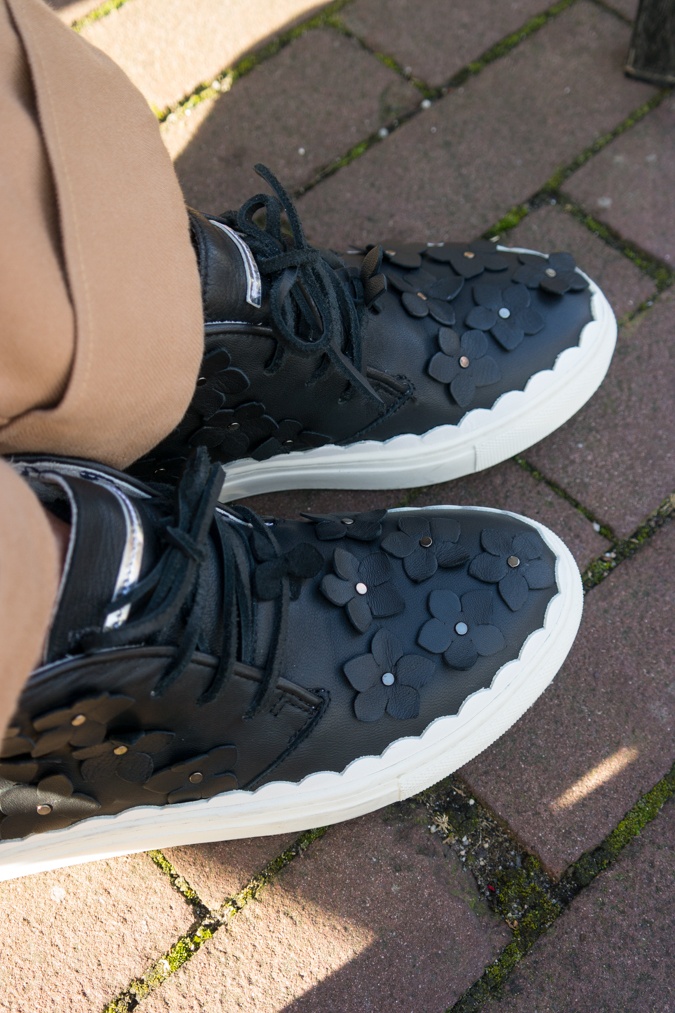 Below: I was probably laughing at people who tried to get out of our way while we were photographing. 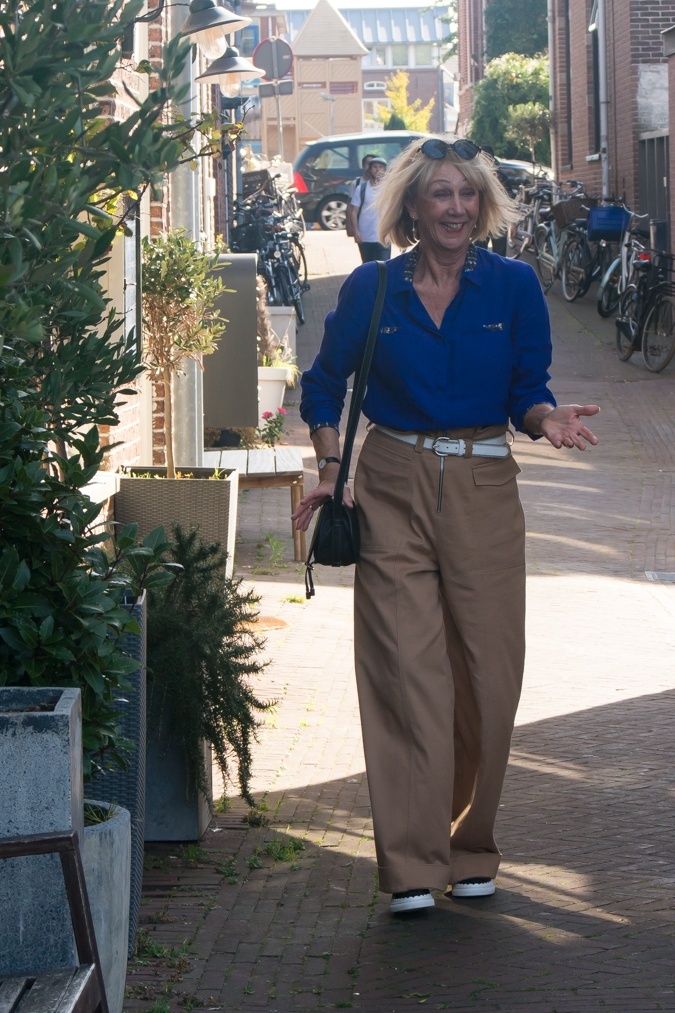 Below: On the side of a building were bicycles, bicycles and bicycles. This country is going to go down because of all the bicycles. You know there are 23 million bicycles in the Netherlands? 23 MILLION in a country the size of a stamp. 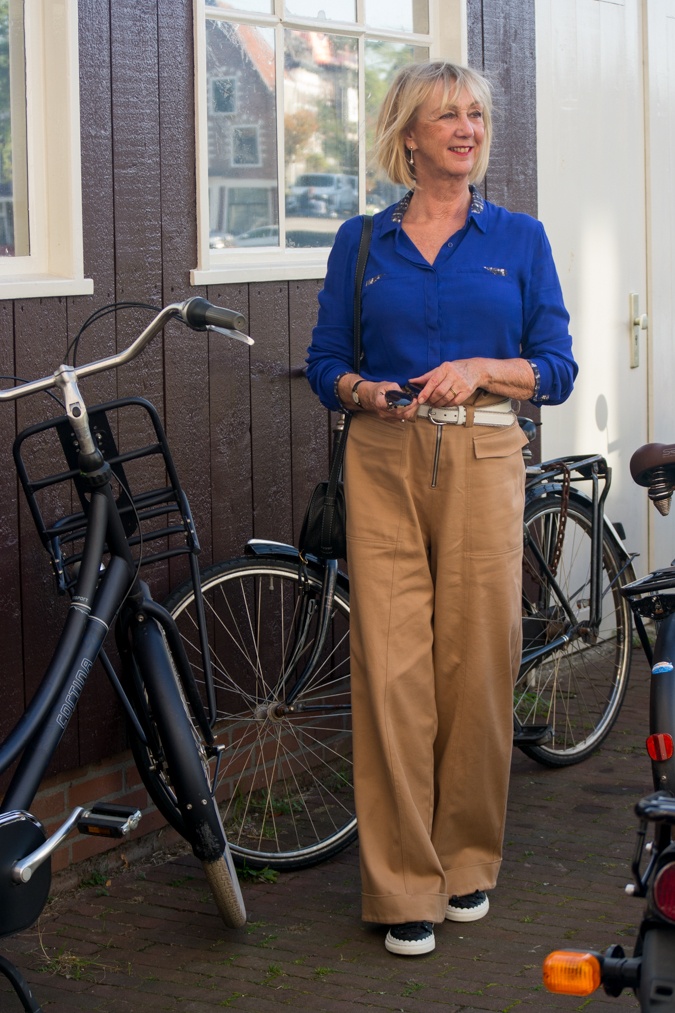 Below: Ron decided “if you can’t beat them, join them” and used a bike as photo stand. This is my Chloé mini crossbody bag, called Marcie. The one I got as a present from my friend Marianne. 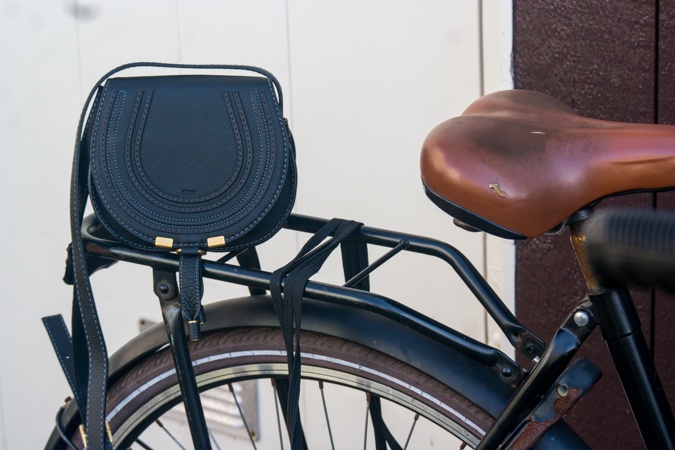 Below: An even closer shot, which I made when it arrived in its pretty box. I adore it. My white mini bag from Essentiel Antwerp has proven to be very useful, but this one will even be better, especially in winter. Thank you so much Marianne.

Below: Two cool pictures of the neighbourhood near the windmill. 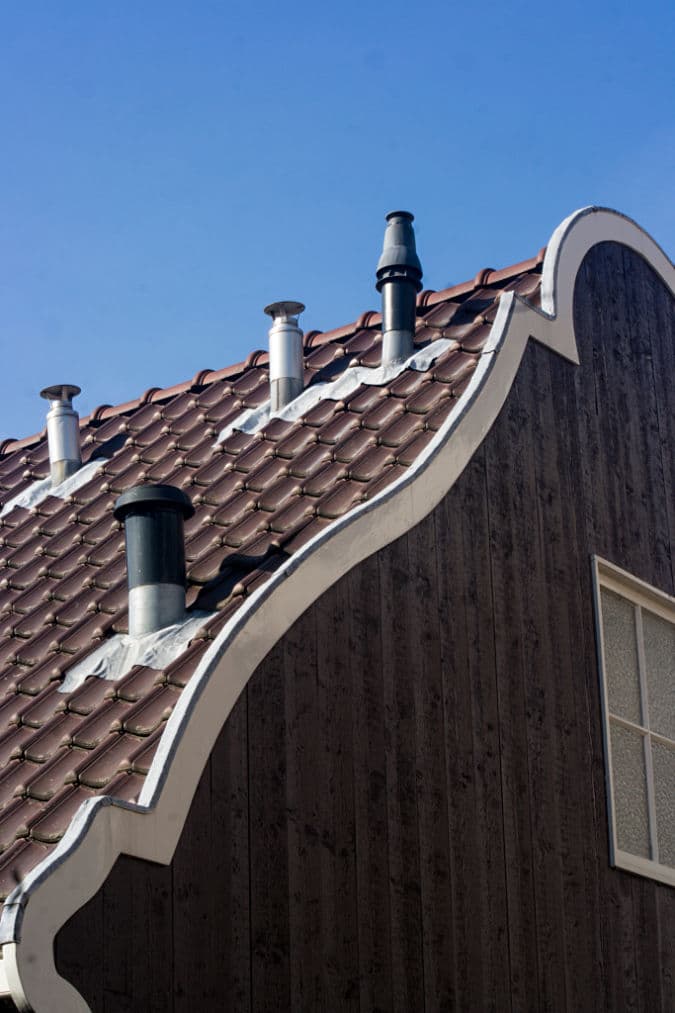 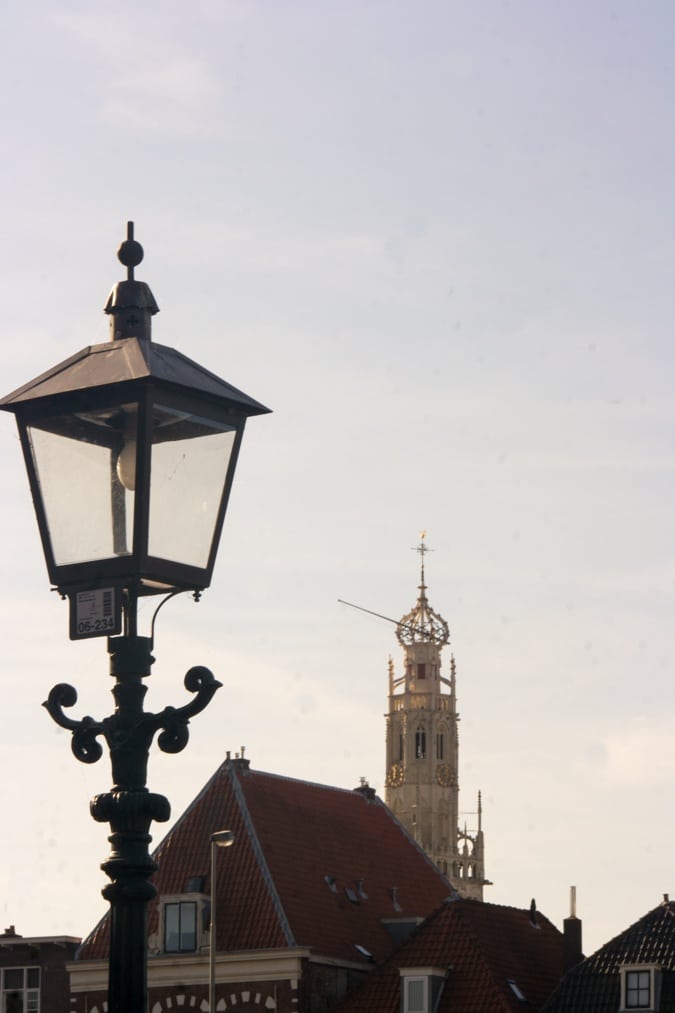 Below: One last outfit photo, a bit hazy. See how lovely that bag hangs on my hip. Equally nice worn as crossbody bag. 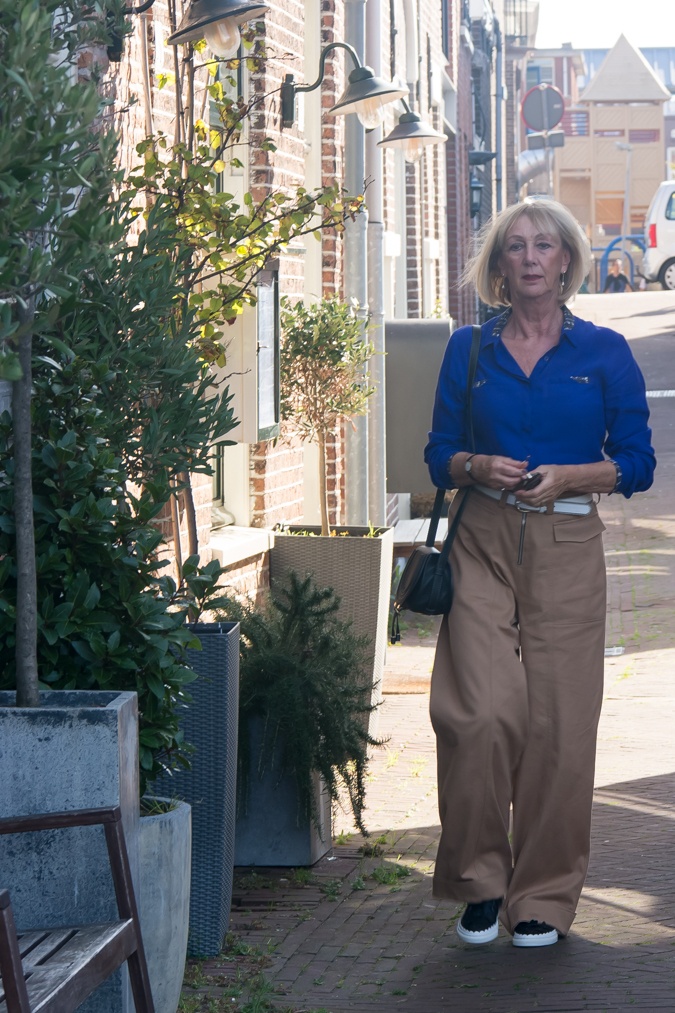 The above is Saturday covered. On Sunday I picked up my mom (she lives an hour’s drive away) and we went to visit my cousins here in Haarlem. Mom hadn’t seen three of them for a couple of years and one for over 40 years. It was a delightful afternoon. Ron drove her back home after dinner.

Monday and Tuesday: uneventful work things. With my usual fitness hour Monday evening. Tuesdaynight was terrible, I didn’t get to sleep until 3.30 a.m. and had to get up at 7.30. I was really tired all day. No idea what happened there as I usually sleep very well.

Wednesday early morning a man came to see us about some nasty blemishes on two walls downstairs. We knew they were caused by rising damp (a problem in this area) but we weren’t sure how serious it was. Investigation was necessary as you don’t want your clothes and house to smell damp and mouldy, right? The man was a gem. He didn’t sell me humbug and he didn’t sell expensive treatment. No, he said, it wasn’t a problem, they were just salty spots, the rest was fine; I need not worry about becoming smelly. I could have kissed him. I have dealt with several men from such companies. They were “cowboys” who irritated the hell out of me. Cost us quite some money as we had the walls treated a couple of times.

What a good start of the day, inspite of the fact I could have done with some more sleep. I skipped my Wednesday fitness hour (bad bad girl) and tried to make up for it by cycling for ten minutes (yeah, right.. as if). But I needed to be ready to meet Anke, one of my Shopping Saturday friends. She was coming to Haarlem, with her little daughter who’s first birthday is at the end of October.

Below: Anke and her little daughter, who laughed a lot, only not the moments I was photographing. Typical for children. 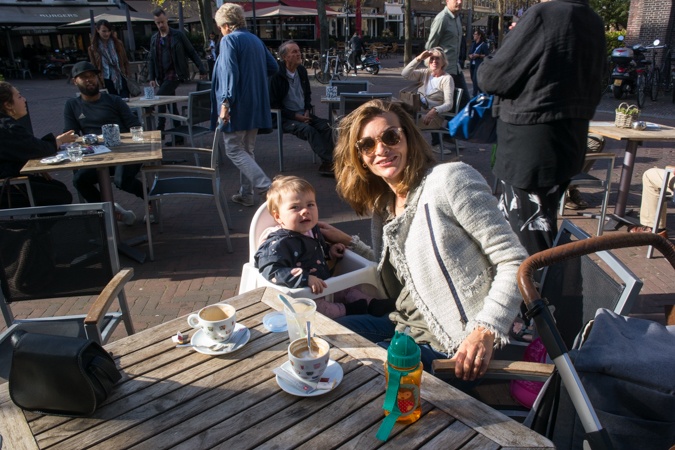 Below: The view from the terrace which is behind the big church right in the centre of town. 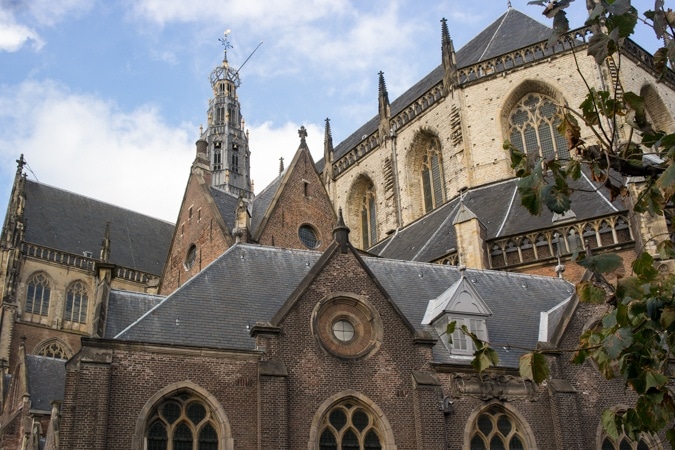 Below: Wednesday outfit with the church reflected in the windows. 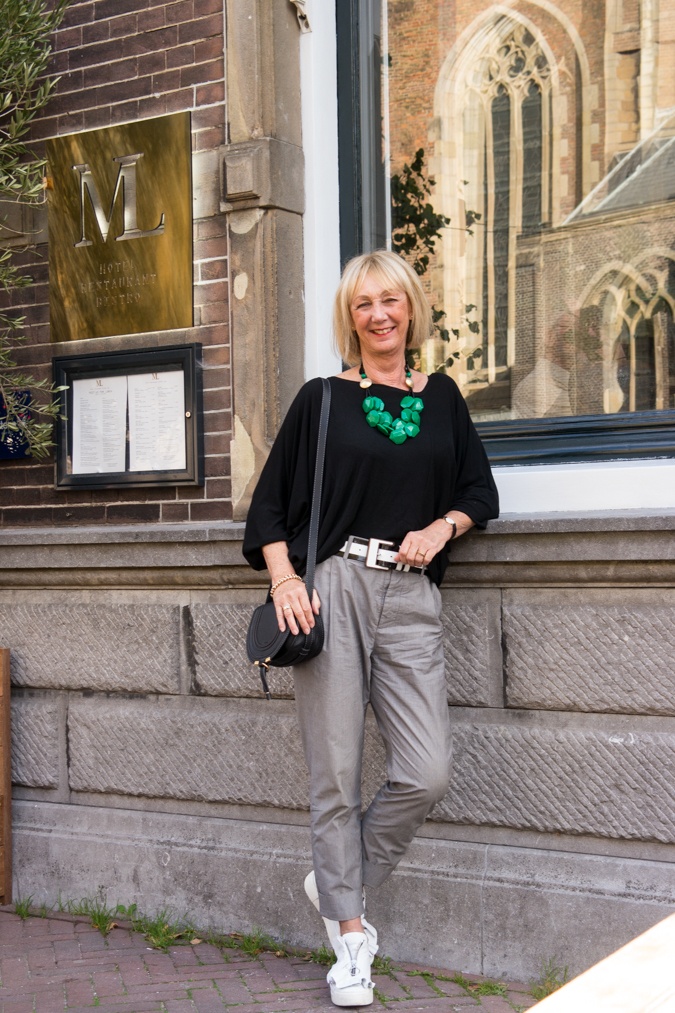 Anke wanted to look for shoes in one shop which wasn’t far from the terrace. The result? Me (and not her) buying new sneakers. Bye bye resolutions / credit card in the freezer. (I am soooo weak in this department.)

To make matters worse Today’s Vintage in Hoofddorp advertised a great pair of second hand jeans. I checked them out in their store, as I need to replace my favourite but old jeans. Alas, they weren’t what I was looking for. So I came away with a pair of biker boots. Please don’t try and find any logic in this. There isn’t.

Wednesday late afternoon Ron and I assessed some other spectacles. Hurray, he found a great pair.

Thursday: work, uneventful as talking to my mother and a friend down the street aren’t exactly earth shattering life events.

Friday: took a couple of hours off from work and ran errands: fetched Ron’s spectacles, reset Marianne’s watch to winter time + coffee, brought shoe and belts to the cobbler and went to Wynia in Amsterdam because they advertised such good jeans. Fortunately (I know this sounds strange) the jeans weren’t what I was looking for. I broke my vow earlier this week and I didn’t really want to spend more money. Resisted all the other lovely things in that shop! Pat on the back for me.