Multi-coloured knitted cardigan and fun in a store 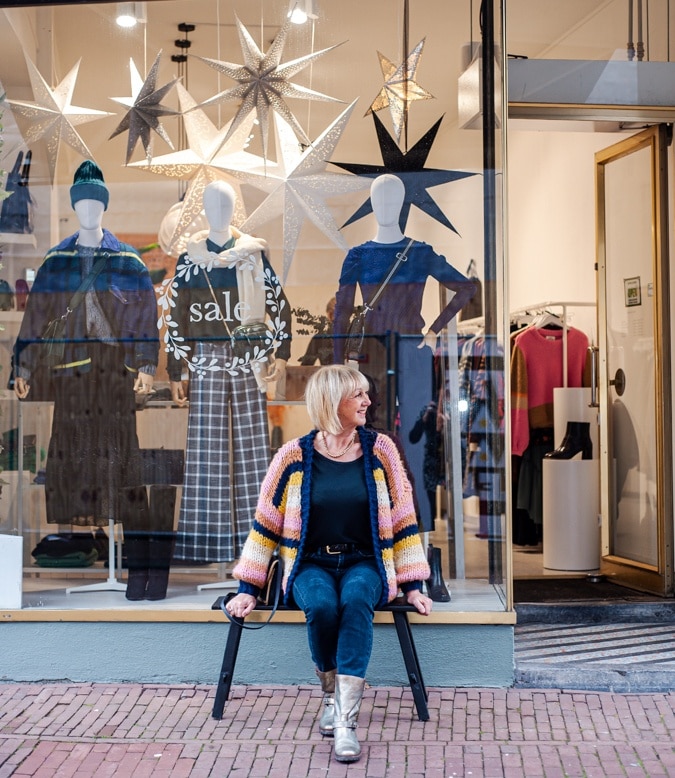 Kitty had asked Karlijn, the owner of kpa.haarlem, one of my favourite stores, whether it would be all right if we had a photo shoot in her store if it was a cold day. She agreed and of course I chose to feature the multi-coloured knitted cardigan I had bought there a month ago. It would not have been nice to feature clothes that were from another store, right?

Karlijn opened an hour earlier that Sunday so we could have the shop to ourselves. And… being indoors with mirrors is heaven for my hair-do.

You are about to see a lot of photos as Kitty didn’t only take photos of my cardigan but also of a few things I tried on. (That shop is to me like a candy store is to a kid.) So without further ado…

Below: The shop from the inside. kpa.haarlem is very accessible and Karlijn is an excellent stylist. 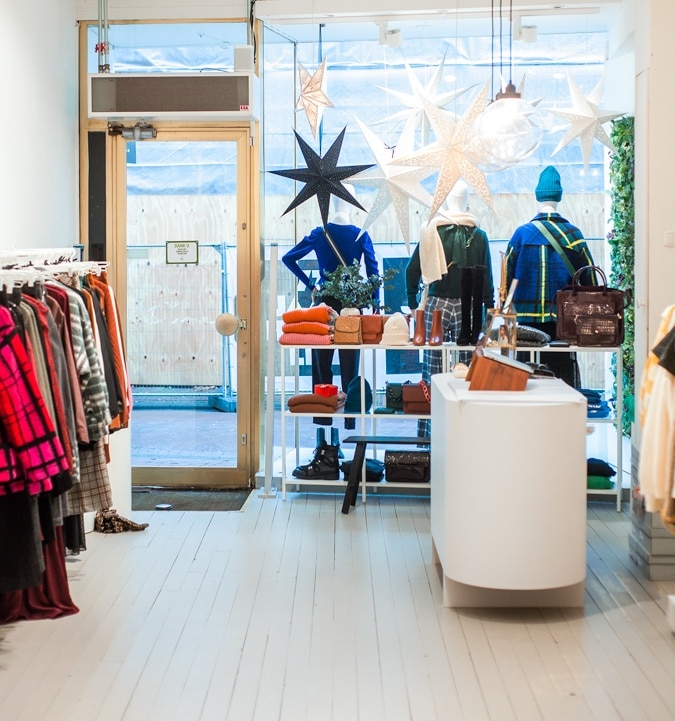 Below: It took me a while before I had the right combination with this cardigan. It is big and bulky and it was rather wide at the neck. The latter I solved by inserting a draw string through the blue part of the neck. The bulkiness was solved by wearing bulky (golden) boots (best buy ever). A column of blue in between and I was satisfied. 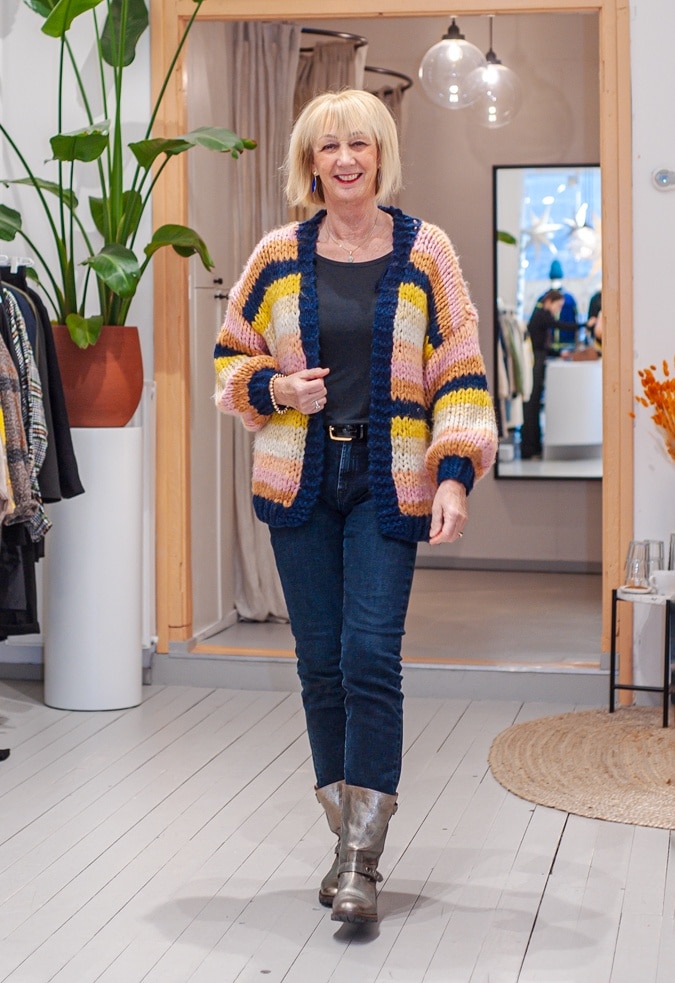 Below: Close-up of the earrings by AdorbyAyesha. 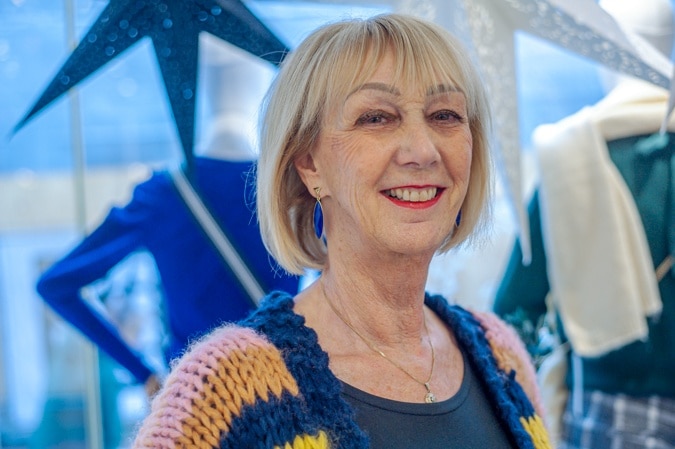 Below: In the post where I showed the short blue coat (also from kpa.haarlem) I wore this Dries van Noten bag as well. It received a few comments from friends who thought it was a bit too formal for such a casual outfit. This cardigan is even more casual, so I doubt whether they will approve of the bag with it. I like it though. 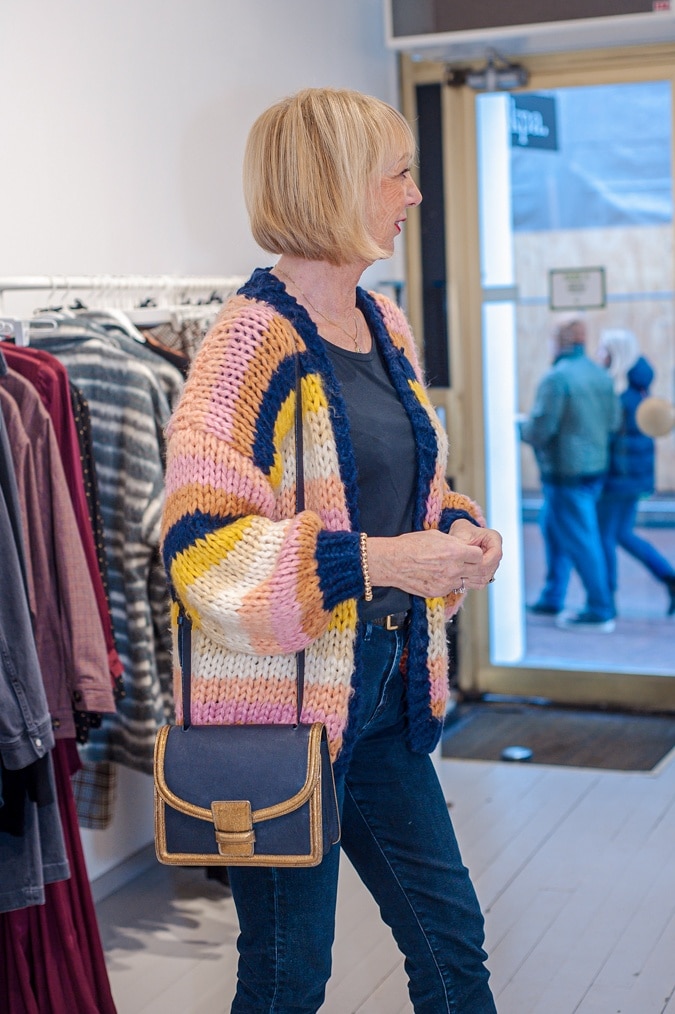 Below: I do have another, more casual blue bag with me, as you can see. But I still prefer the Dries van Noten one. 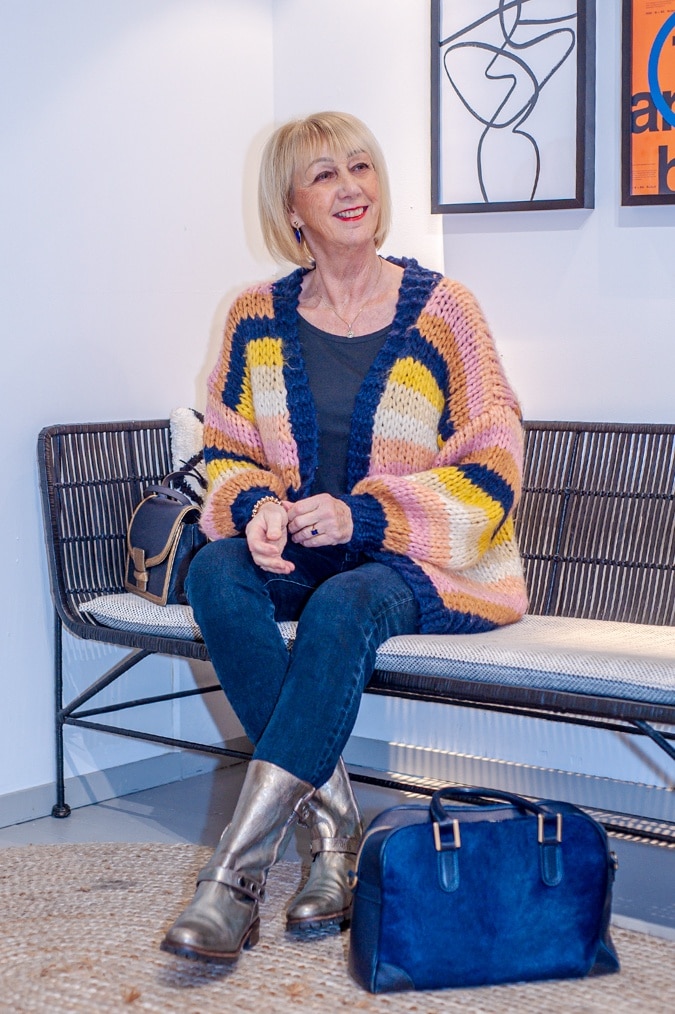 Below: Kitty having a cup of coffee. We all kept our distance. Karlijn and Kitty wore masks but for me that was a waste of time as I had to be photographed. 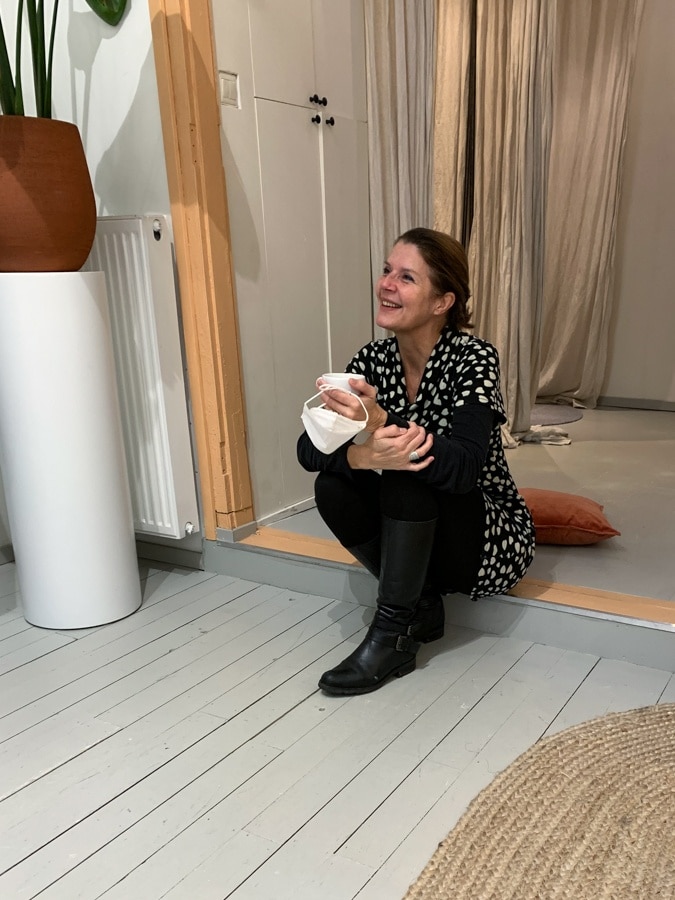 Below: I started to browse. Bright purple always attracts me, but I realized I have one in my wardrobe. 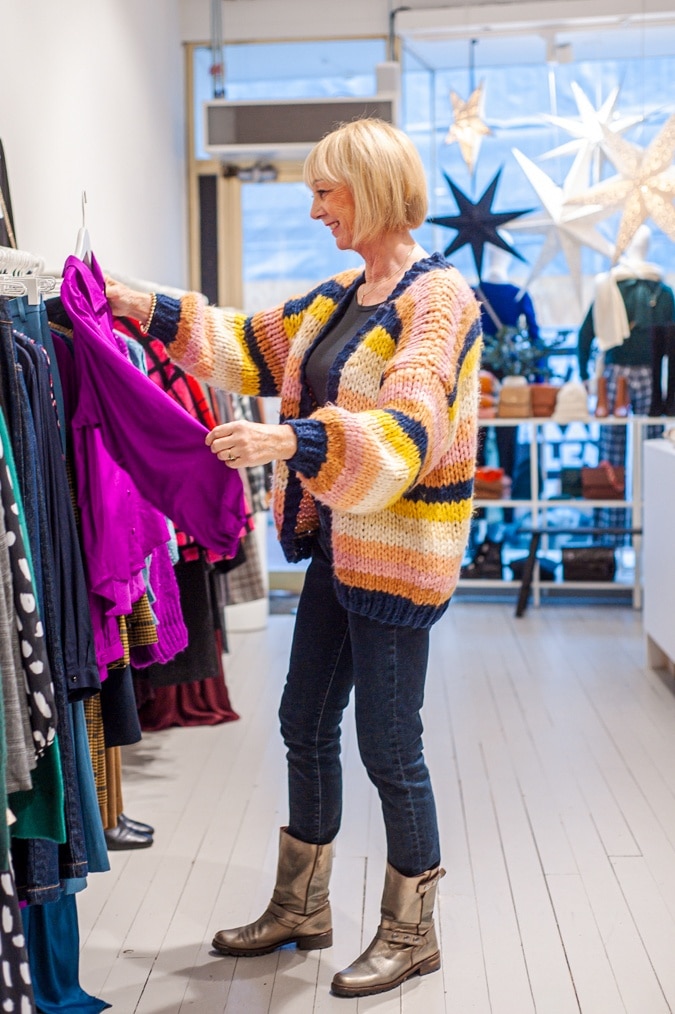 Below: How about this lovely corn coloured jumper? No, for me that is the wrong shade of yellow, but I am sure it will make somebody happy. 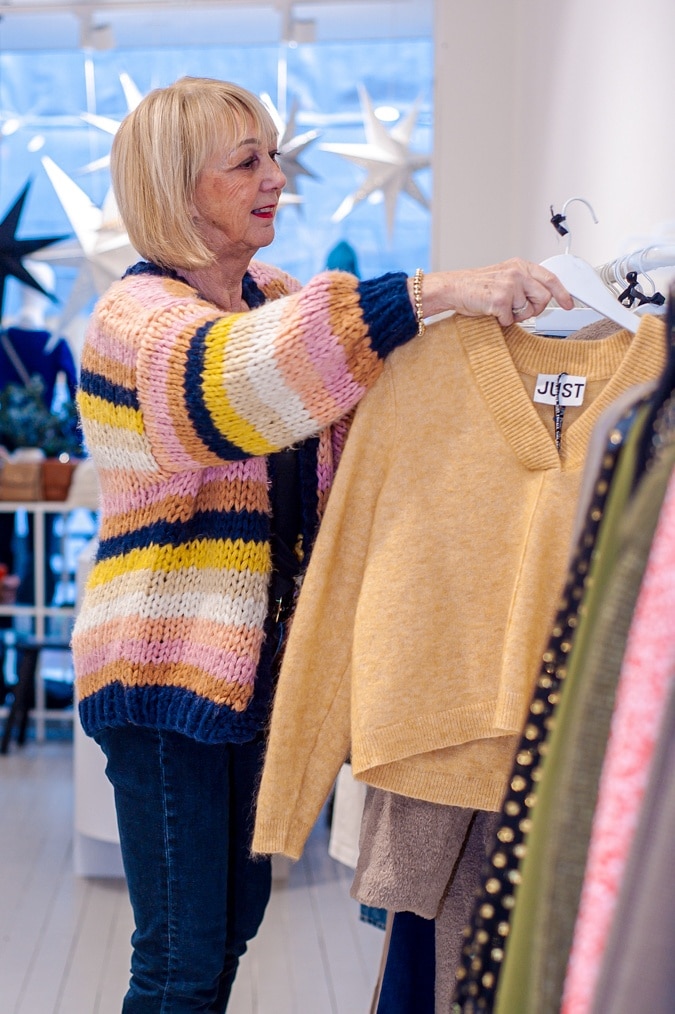 Below: What a great maxi dress. It felt as if I wasn’t wearing anything. The big plus of a maxi dress is that you can wear low heeled shoes or boots with it and still look good. Karlijn handed me these tan booties with a matching bag. I left everything behind in the shop, but I am still tempted. 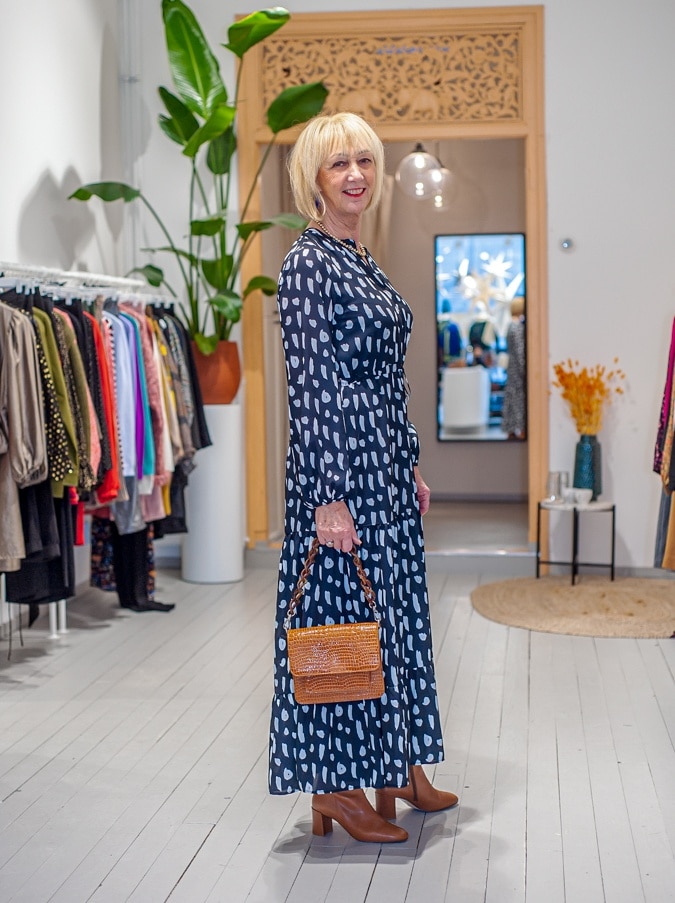 Below: With a red bag and black boots. 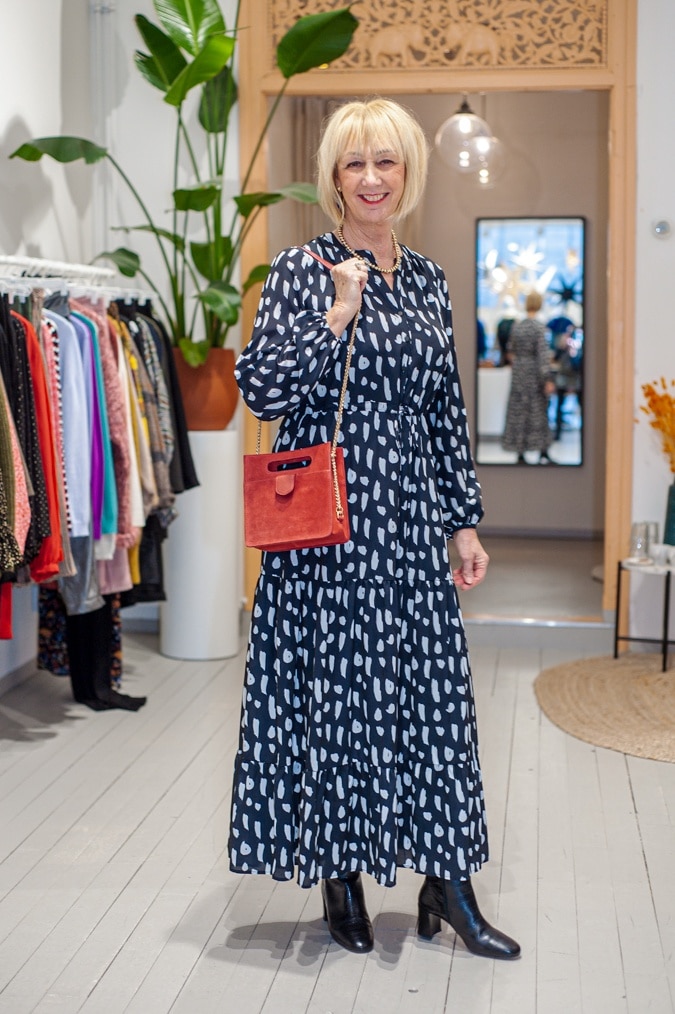 Below: Then I found a shirt and skirt with little polka dots. I tried it on but left it in the shop. When Ron saw the photos on Wednesday, he was over the moon and bought the set for me. He is the sweetest. He spoils me rotten. You will see the photos in a proper blog post. The ones Kitty took in the shop will stay on my computer. 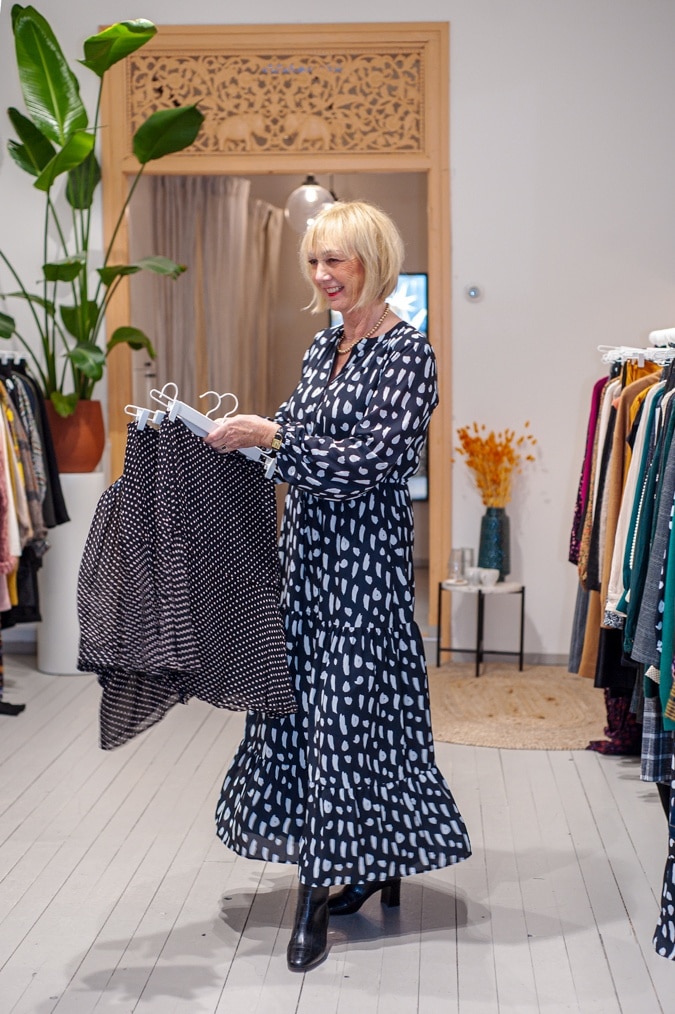 Below: Kitty tried on this coat but to her disappointment it was a size too small. 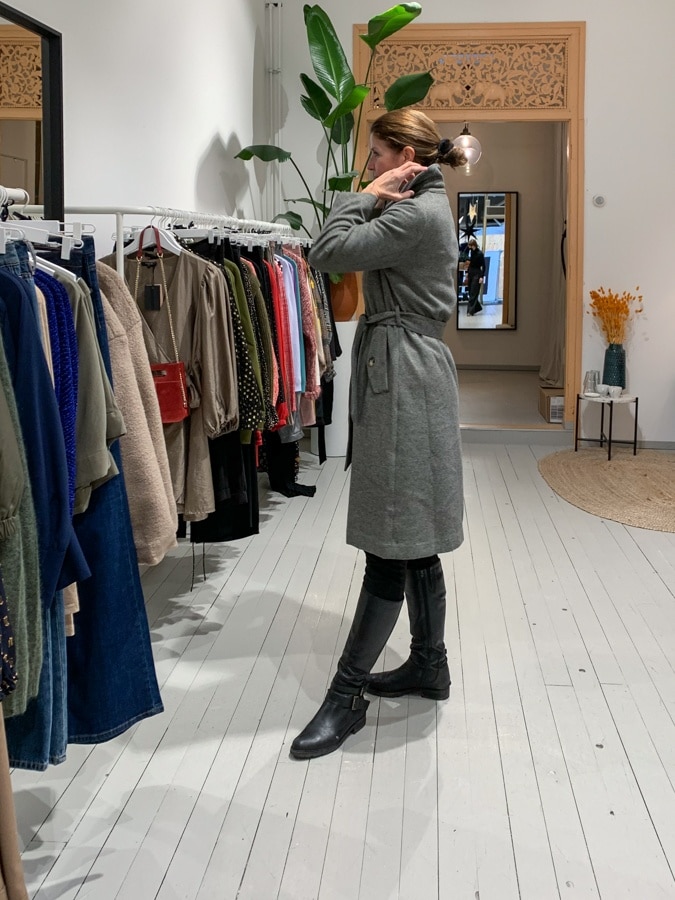 Below: No harm done, she found this fabulous coat instead and bought it. It was a  good day for the three of us. 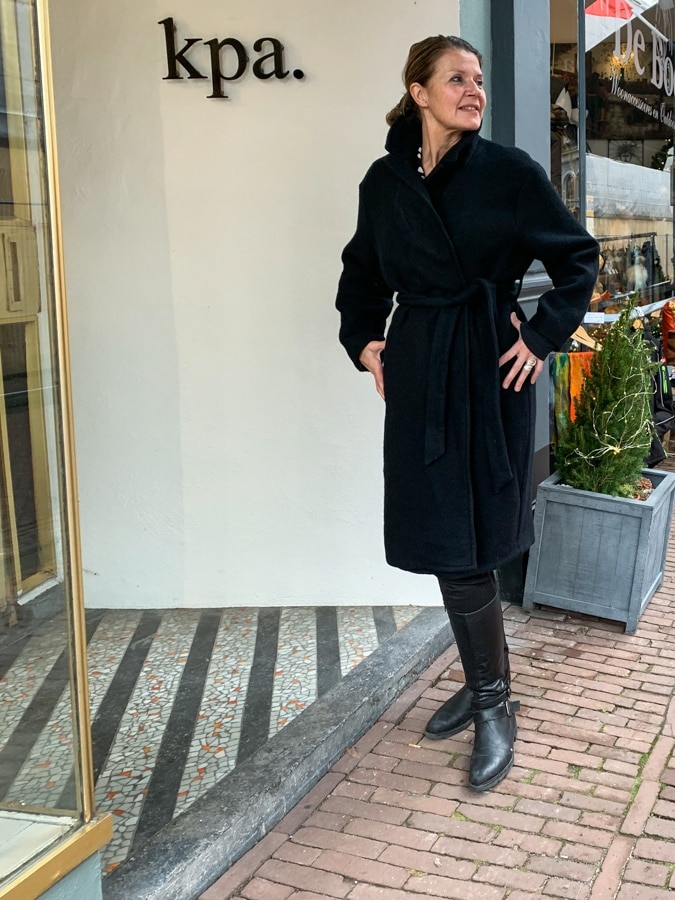 Although the shop is closed now due to lock-down, Karlijn still sells through Instagram and her website: www.kpa-haarlem.nl which she updates every day with new photos of items.

I visited mum again and took her grocery shopping. It is difficult enough for everyone, but for elderly single people who cannot move about that much and cannot go for a walk, it is extra difficult. So I try and visit more often.

Below: Mum looking cheerful as ever. I thought she had a new jumper but no, it was years old. She got the hang of the e-reader. Even solved the landscape upside down problem. She figured out exactly how she had to move the screen for it to turn 180 degrees. Clever mother. I was just yelling at the screen. 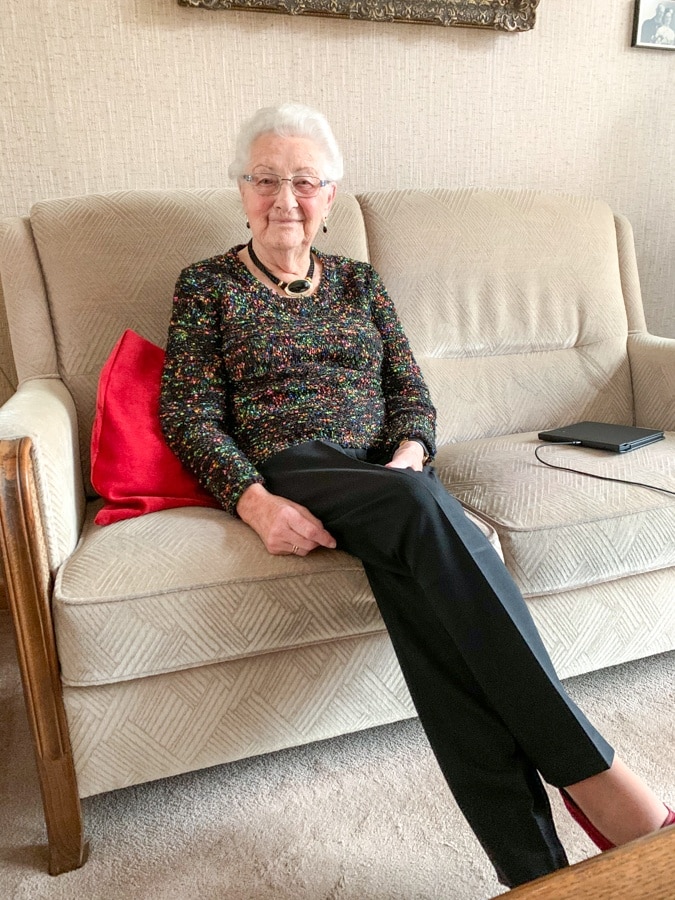 Below: I was wearing my orange snake print shirt (link to original post) that day. This time with my frayed jeans. It was a very dark day; the shirt is much brighter as you can see in the original post. 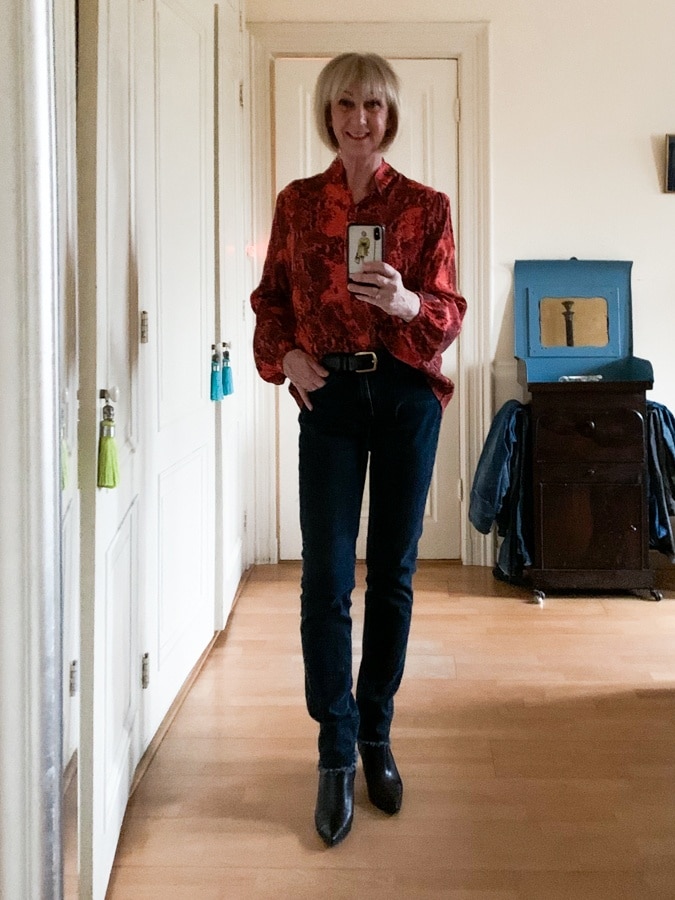 Sunday was the day that Kitty and I did the photo shoot for this post and I visited my hairdresser. Exactly a day before our country went back into total lock-down again. Numbers are still rapidly rising and Christmas gatherings + New Year celebrations are coming up, so the government decided to shut down everything with the exception of the necessary shops like supermarkets.  My appointment with the hairdresser was a regular one and scheduled 6 weeks before. Lucky shot. I asked to keep my hair a little longer this time which she did.

Sunday evening I suddenly felt I needed a glass of Baileys and that rarely happens. Ron offered to fetch a bottle, while getting some jenever (Dutch gin) for himself as well. And why not have some crackers, French cheese and paté instead of cooking. Why not indeed! We were saying a virtual ‘Cheers’ to Marla whose birthday it was that day. 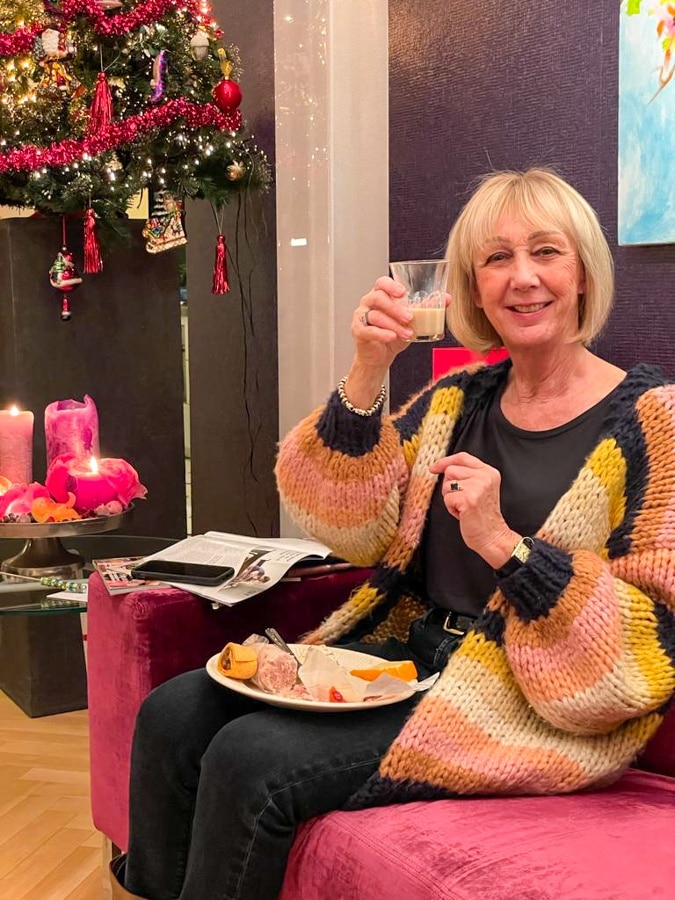 Below: On Monday I cleared out another piece of my closet and rearranged a lot. The fabric dividers had arrived and I am so pleased with my underwear and tights drawer (first photo below). I can find stuff in a second now. I also hung the clothes in one closet of my wardrobe by colour. I still have to do the other ones. It is so worthwhile. When I sent Anja the 2 photos of my drawers, she replied with: “What am I looking at? The before or after?” WELL…the after of course. You have no idea of the state of this drawer before. Anja is much more organized than I am haha. 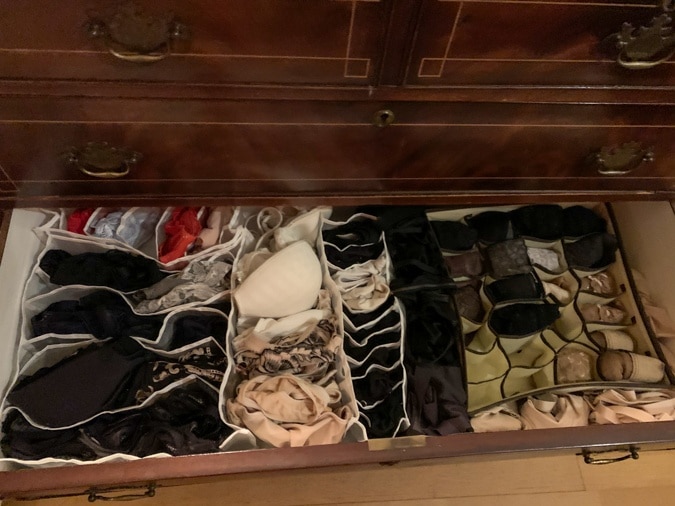 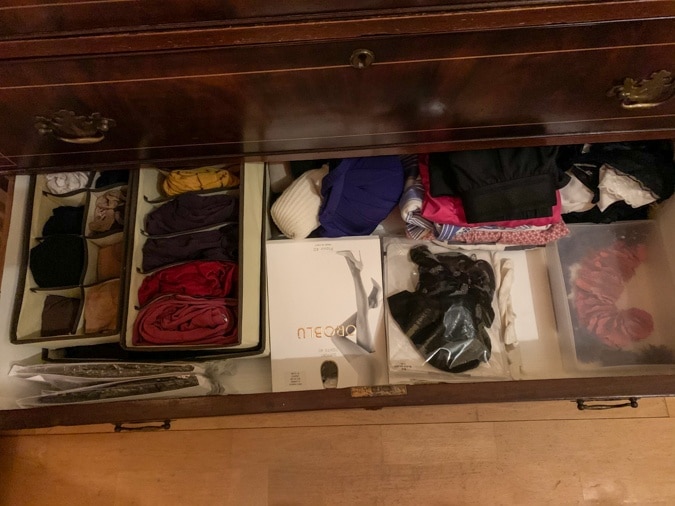 I had a nice long Facetime conversation with Anja who is enjoying her new house in Spain. Wore this outfit. 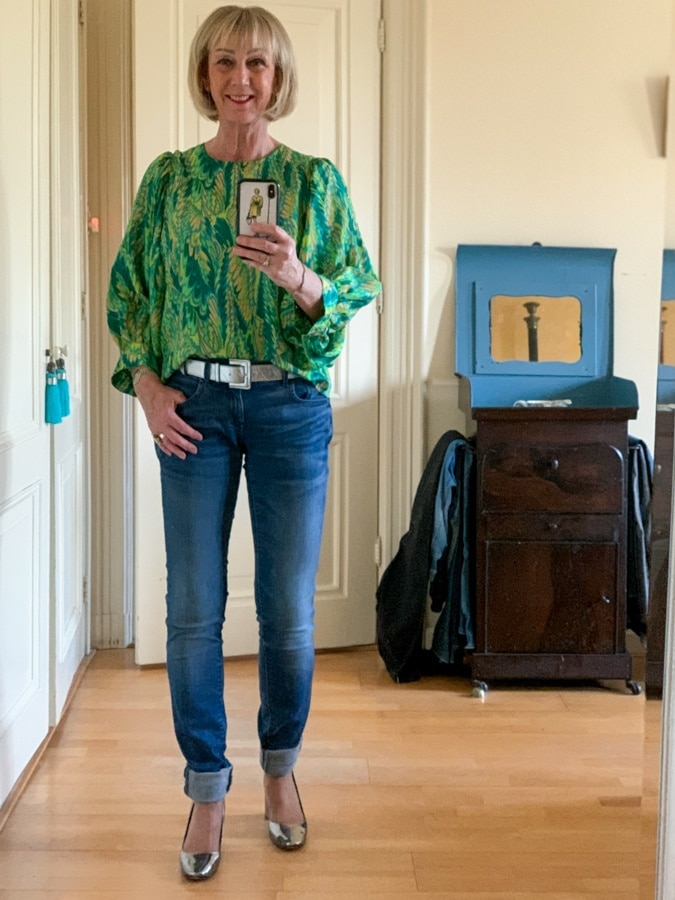 Below: Tuesday outfit. In the original post I wore it with pumps and no necklace. 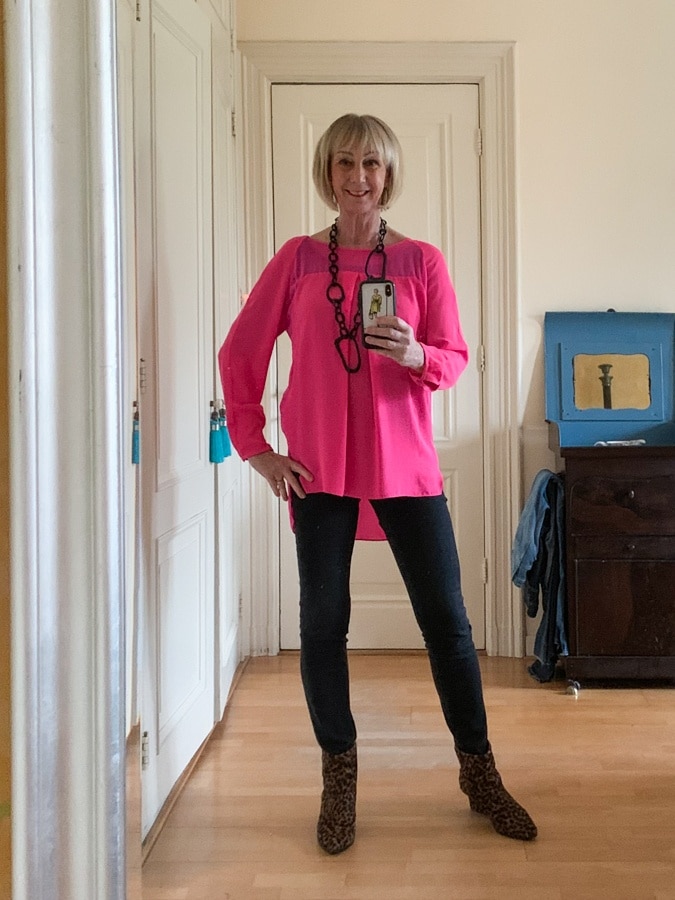 A little cabinet which I had ordered, arrived and when I unpacked it to assemble, it turned out to be far too small. What a hassle to get everything back into that box, get a label, etc etc. I don’t like ordering furniture online. I am not going to do it again.

Wednesday was a lovely day. Ron took photos for the blog again. You will see them soon. He is really helping me with my blog.

Thursday. Loes and I went on a photo shoot which went smoothly. Only as I uploaded the photos to my computer that evening, I saw that nearly all photos weren’t sharp. The settings on the camera must have accidently changed and I hadn’t seen it during the shoot. We were being very careful not to get to close to each other and not to keep touching the camera. Covid has this to answer for as well: blurry photos. But, you will get to see them next week and you will have to do with them.

In the afternoon Karlijn of kpa.haarlem dropped off the polka dot blouse and skirt (service!) and I tried it on again. It is a lovely set. In the evening my husband styled it which had me running up and down the stairs, changing tops, boots, tights, jewellery. He is pretty good at styling so I listen. Sometimes we disagree (he doesn’t like the belt I chose). If I strongly disagree I follow my own preference.

It was pretty late before we had finished so we ordered sushi. Gosh, that was one of the best sushi dishes I have had. So fresh, melting in your mouth.

Below: I wore this that day when I wasn’t doing a photo shoot or trying on the polka dot set. If you think creating a blog post is easy… it isn’t. No, just kidding, I know you appreciate all the effort I put in. Besides, it is a hobby and hobbies take time. My paper bag trousers with a black jumper. Link to the original post with a black jacket. 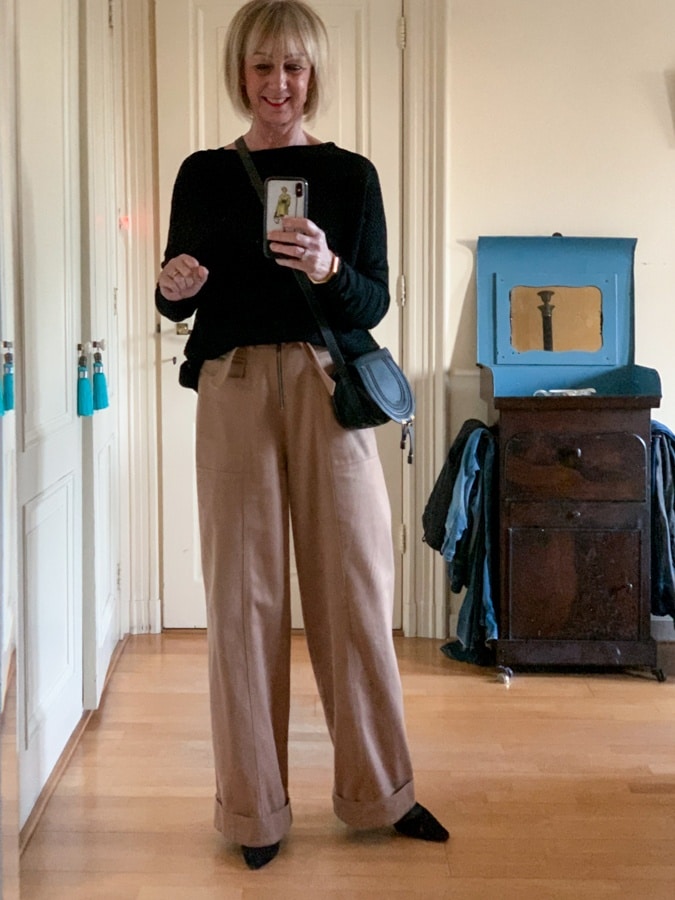 Friday, Sylvia came for a cup of tea. I took this snapshot of her below. As long as we keep the distance, we are allowed to invite a friend in our house. It so lifts your spirits. 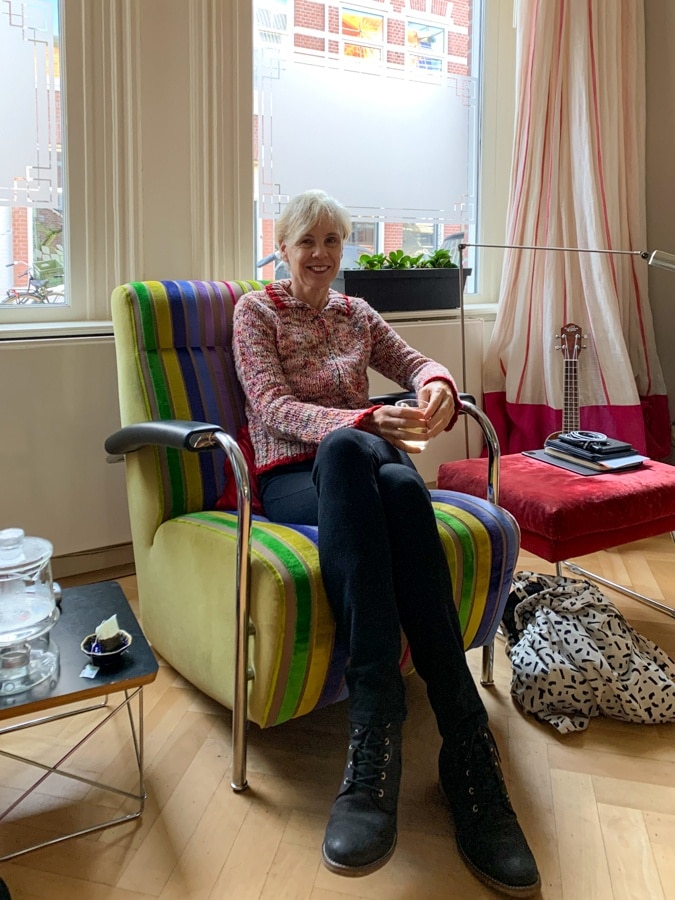 Below: I wore my Weekend Max Mara set again. So comfortable. 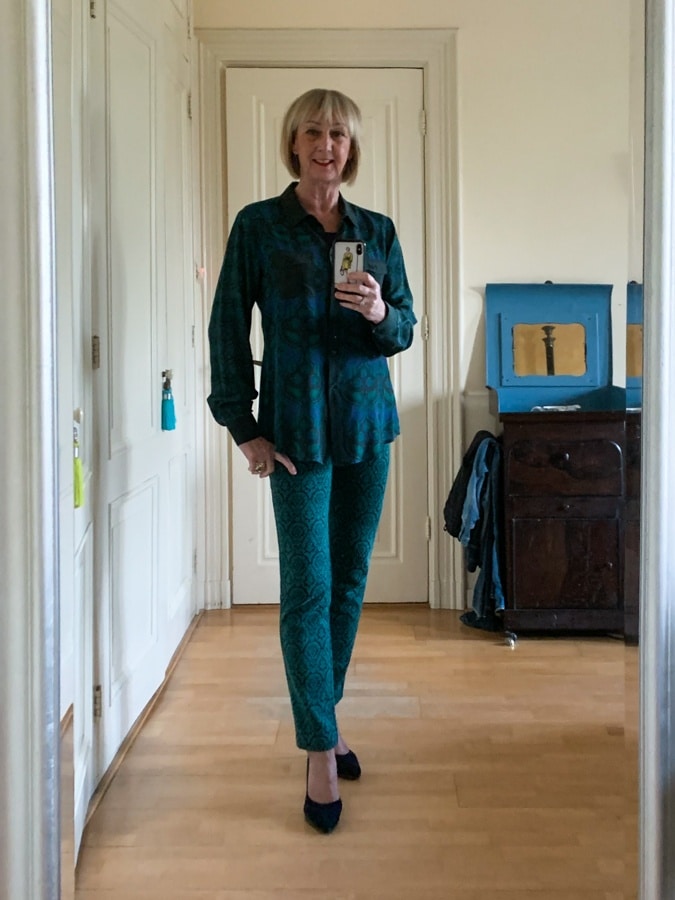 And I got an email from a lady who visited our house this summer. She just rang our doorbell and told us her great great grandparents had lived in our house. She was accompanied by a friend and we had a lovely chat, showed them around the house and listened to her stories. In her mail she shares a lot of family photos, one of them you see below (I got permission). Isn’t it strange to think those people were sitting in our garden, in front of our garden doors so many years ago (assumingly between 1909 and 1938). 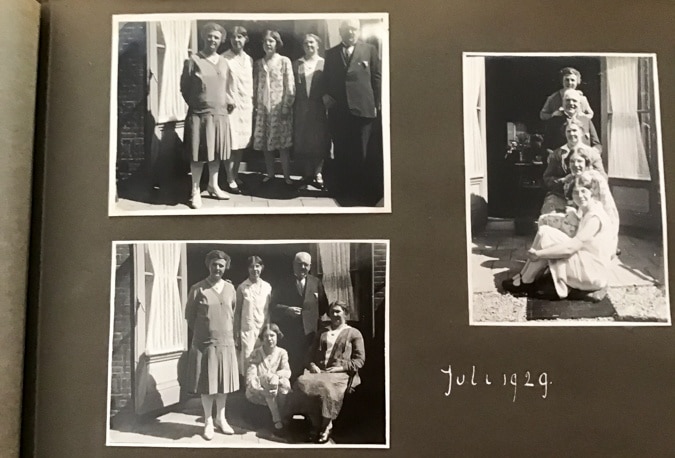