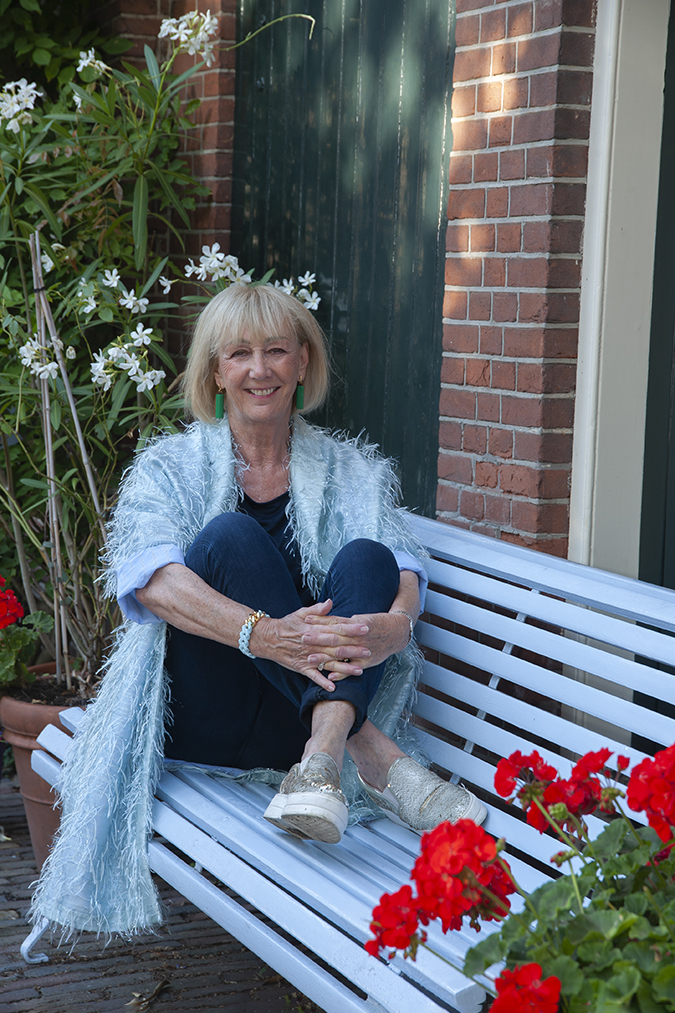 Before I start telling you about this outfit, let me explain why it is called “Big Bird jacket or Pino jacket”. Pino is the Dutch equivalent of Big Bird from Sesame Street, only he is blue. And feathery. Immediately after I bought this jacket in Spain, I named it my Pino jacket.

Below: The Dutch equivalent of Big Bird, called Pino. 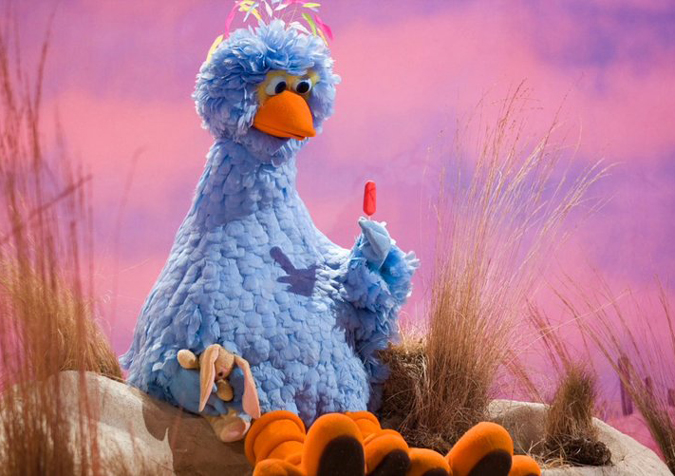 Kitty and I did the photo shoot in the old centre of Haarlem, with a church, a square, trees and old houses. In short, a picturesque area.

Below: Nieuwe Kerk (translation: New Church) is a 17th-century church at Nieuwe Kerksplein. 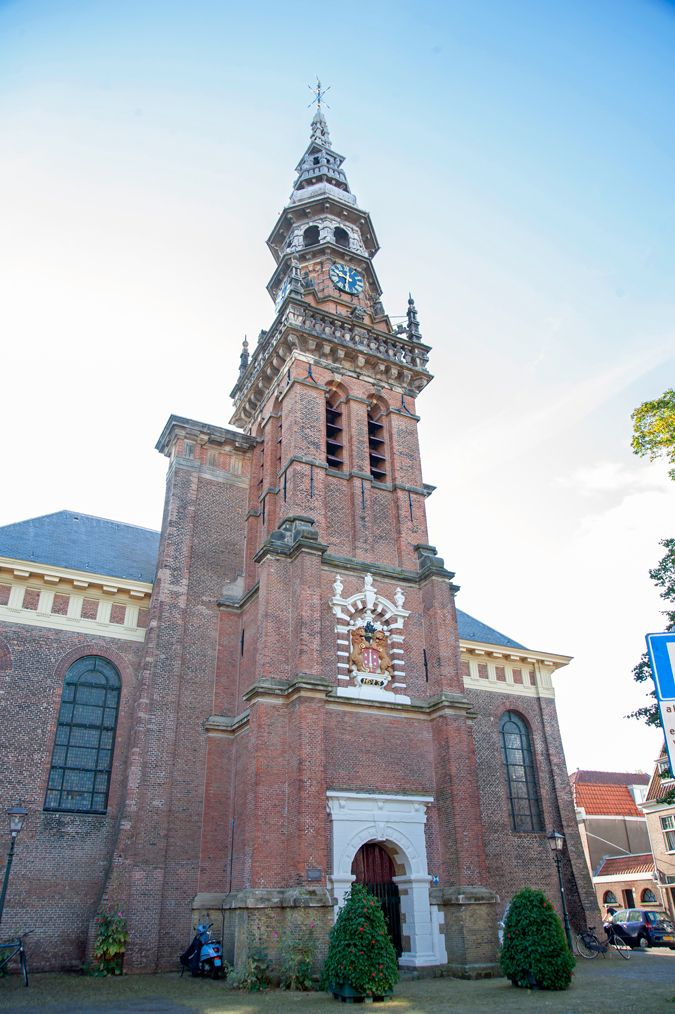 The tower is Dutch Renaissance in style and particularly worth a look-see when you are in the area.

Below: The entrance of a church always provides a good background. 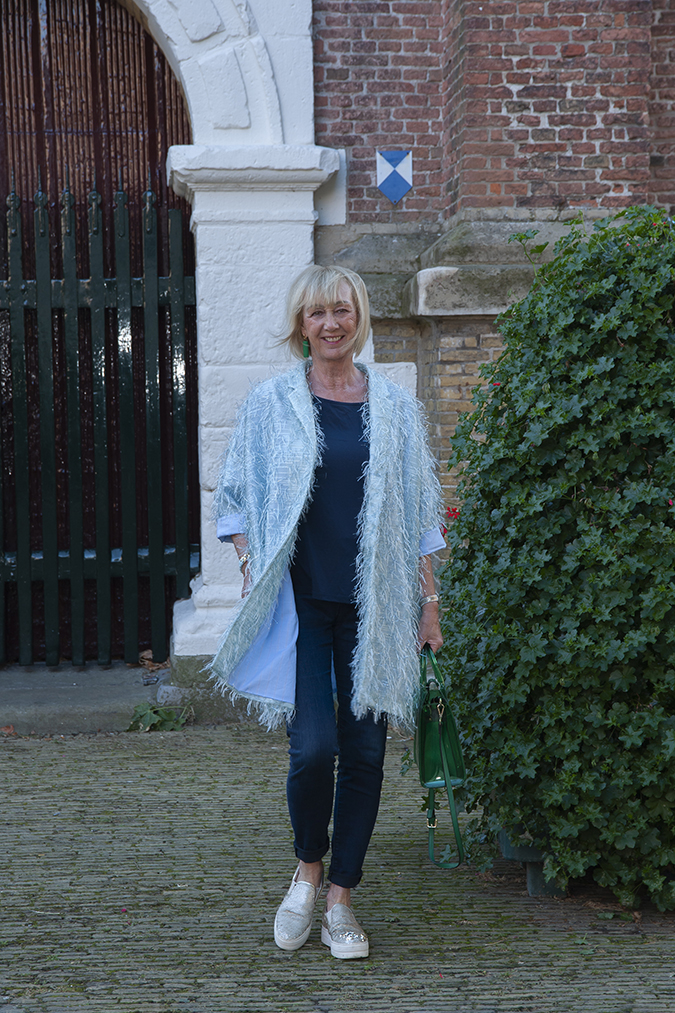 Below: Across from the church is this adorable house. 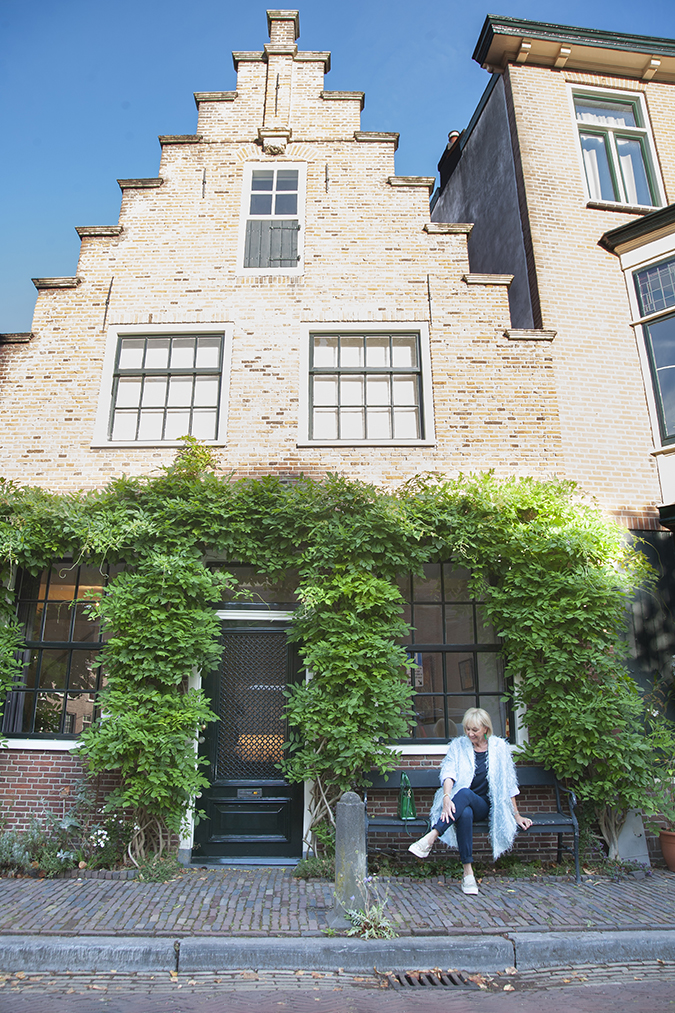 Below: Of course I used the bench for the ‘sitting pose’. Because the jacket is so conspicuous, the rest of the outfit is a plain block of blue. With a touch of green in the earrings and bag. The jeans are J Brand, bought in Vancouver, Canada in 2014. Couldn’t resist wearing the blue bracelet my friend Marjolein gave me. 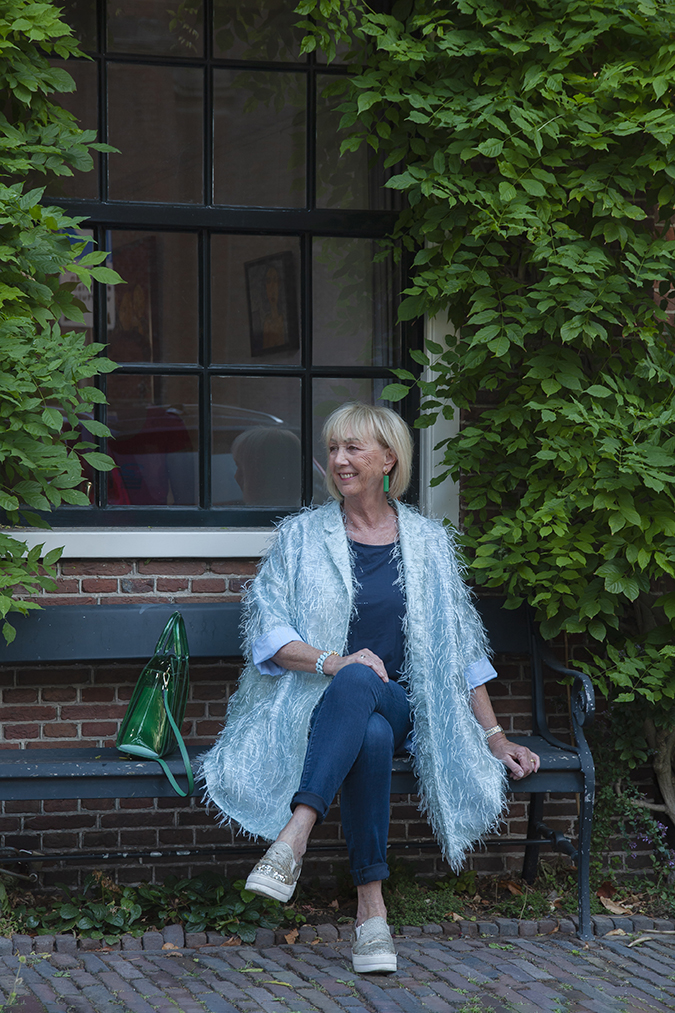 Below: My sequinned trainers (sneakers) from Essentiel Antwerp. You can rub the sequins up for a glittery golden look and down for a matte silver look. I have had them for quite a few years and I still love them. Very comfortable. 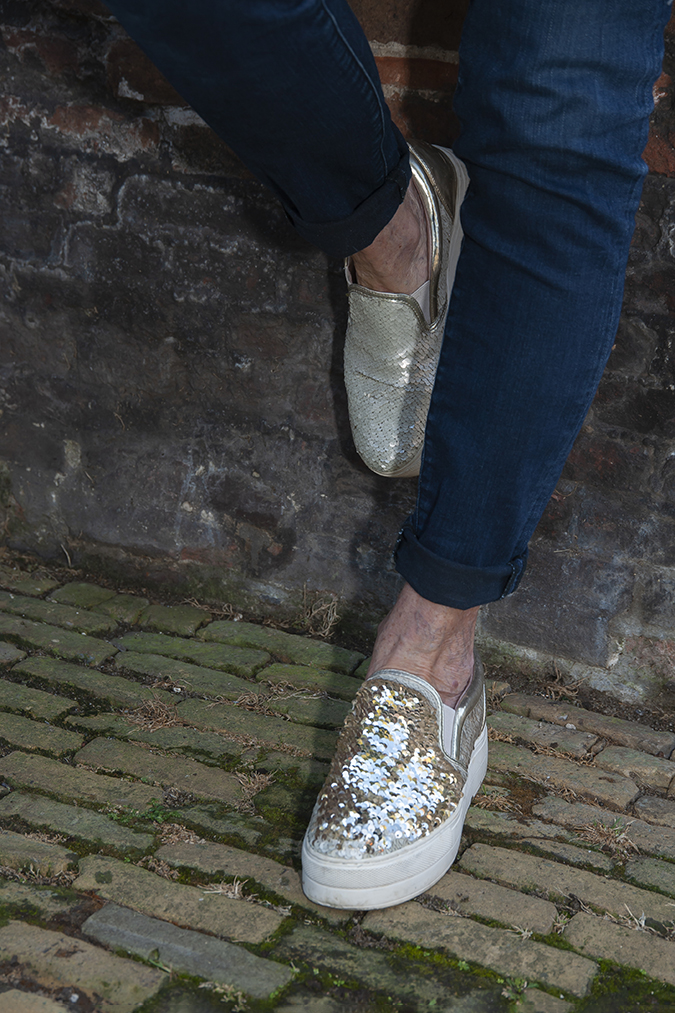 Below: Hollyhocks. I am searching on my phone for the right spelling of these flowers as Kitty was about to take a video of me on this subject, which is just a bit of fun, nothing special.
(Note to people who read my post in their mail: you have to click through to my blog in order to see videos.)

Below: Next to the church is a big square with a modern statue which I dislike (sorry, artist) and many old trees. The kind of square Ron and I always looked for in old French villages. It turns out that we have many of those in Haarlem. With the climate change in full operation, we now also have the temperatures south of France used to have. It seems nice but of course it isn’t. Not at all. 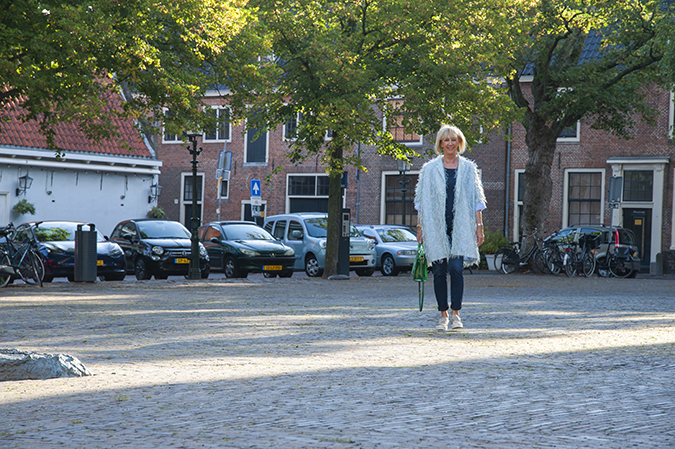 Below: On the bike. As we only have short distances in the Netherlands and certainly in towns and villages, we Dutch cycle a lot. My bike isn’t the nicest but very practical with two side bags to hold groceries and with so little appeal, it isn’t very attractive to steal. 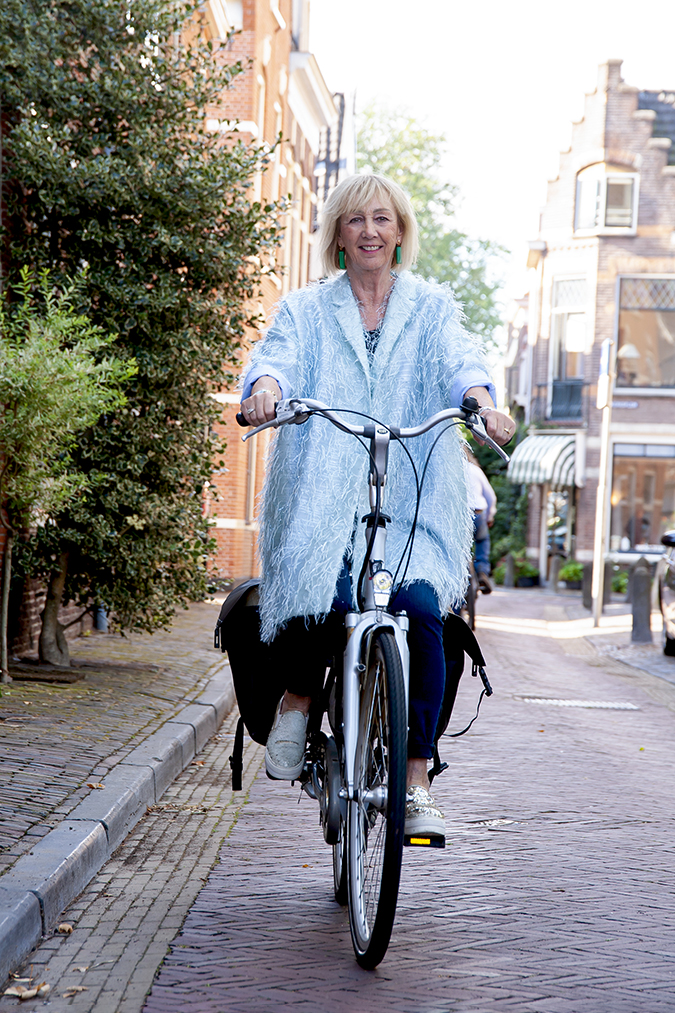 Below: Another outing for the green corrugated cardboard earrings. Now this is a beautiful example of a bokeh photo, which is ‘me sharp and the background blurry’. 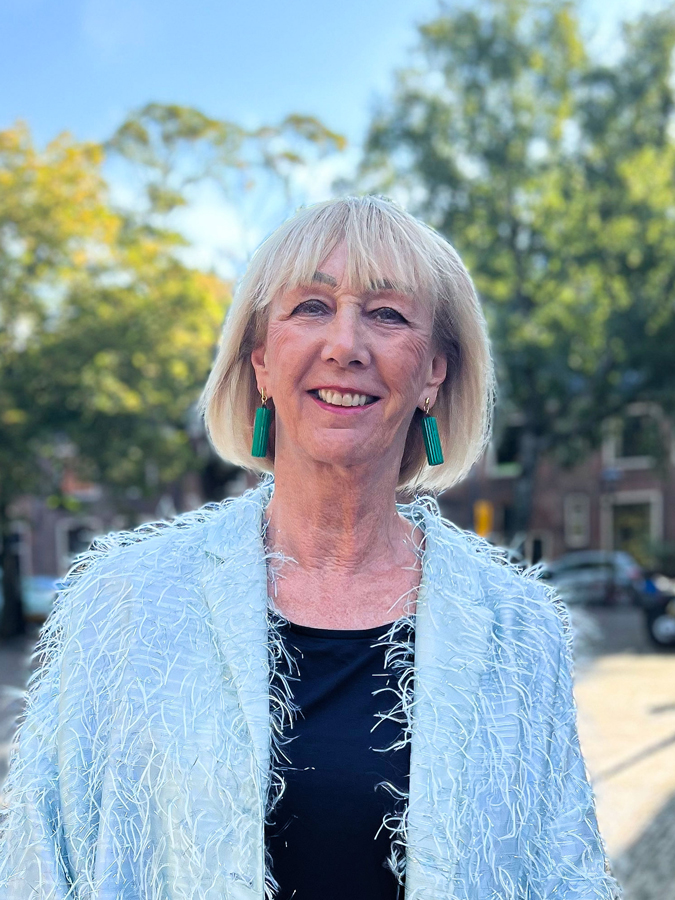 Below: We continued our shoot in the courtyard of some almshouses. Haarlem has many of these, called ‘hofje‘. Usually single elderly ladies live in the very small houses.
(Link to a more wintery shoot in this ‘hofje’ in 2019. Looking at that outfit, I regret having given away that furry jacket. The outfit looked good. Oh and in that post is a photo of dog Watson as a puppy. Adorable.) 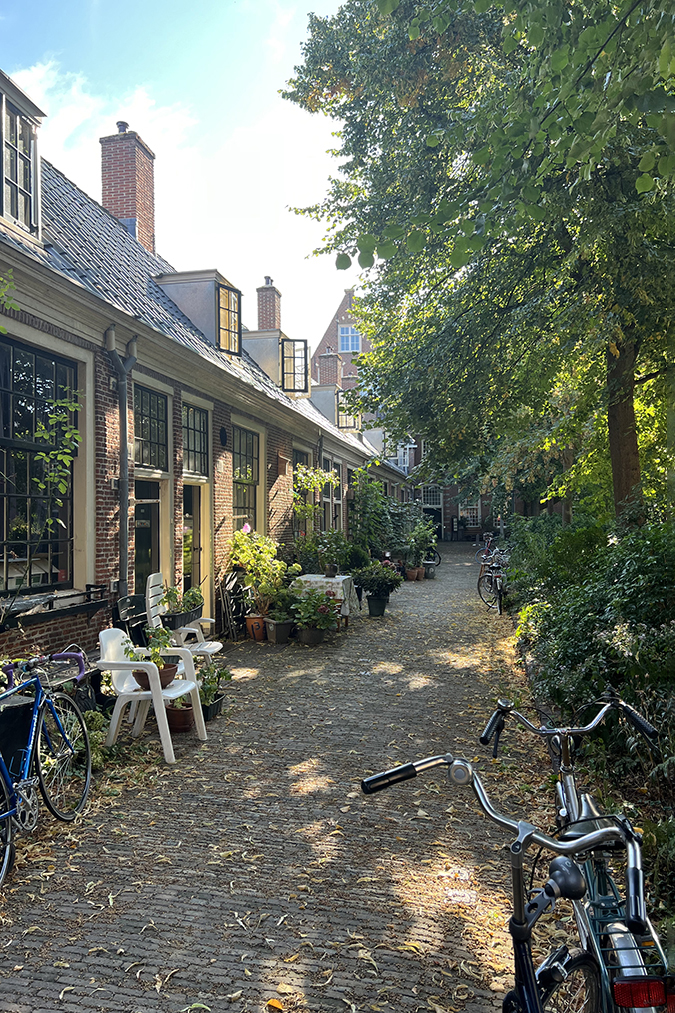 Below: Most of the residents are keen gardeners and have lots of plants in pots in front of their house. 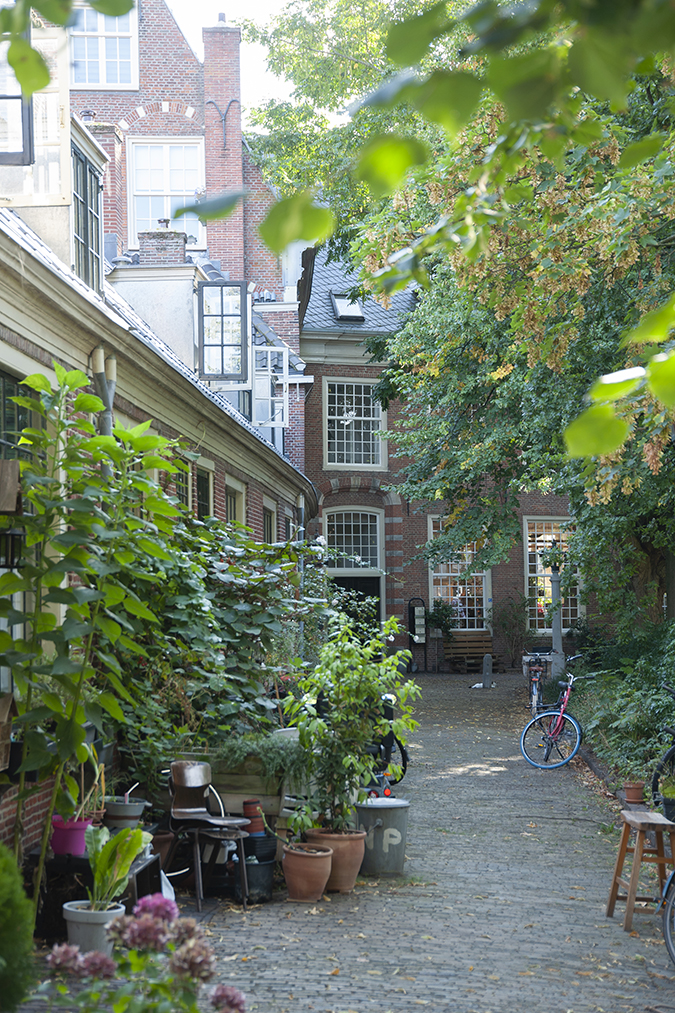 Below: A lovely kitty. Whenever I see a cat, I talk to it and often stroke it. 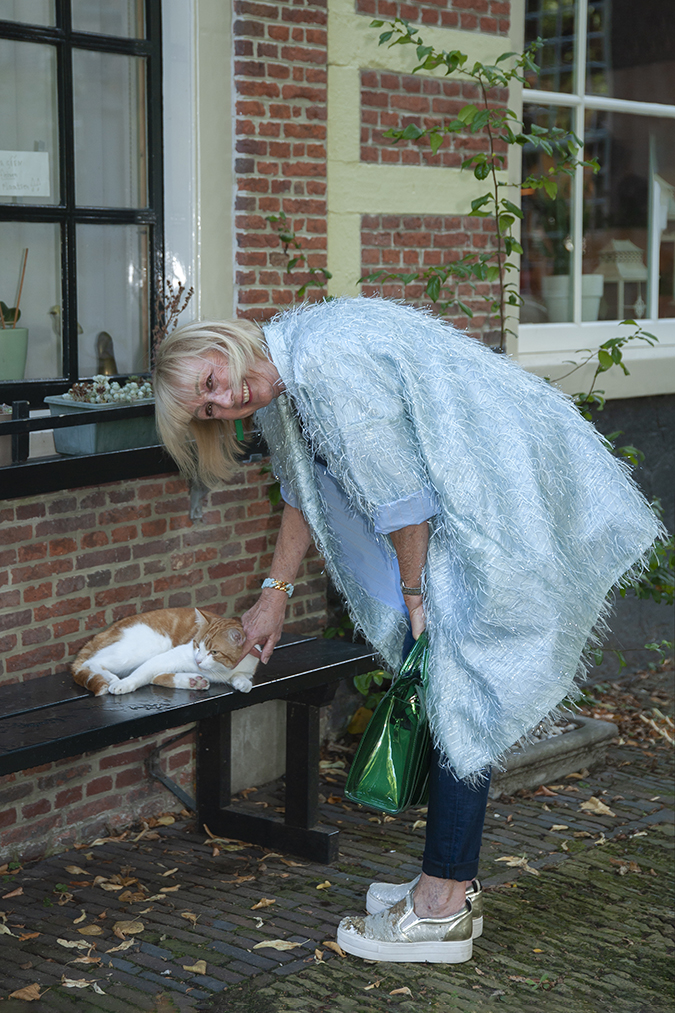 Below: Another lovely corner. 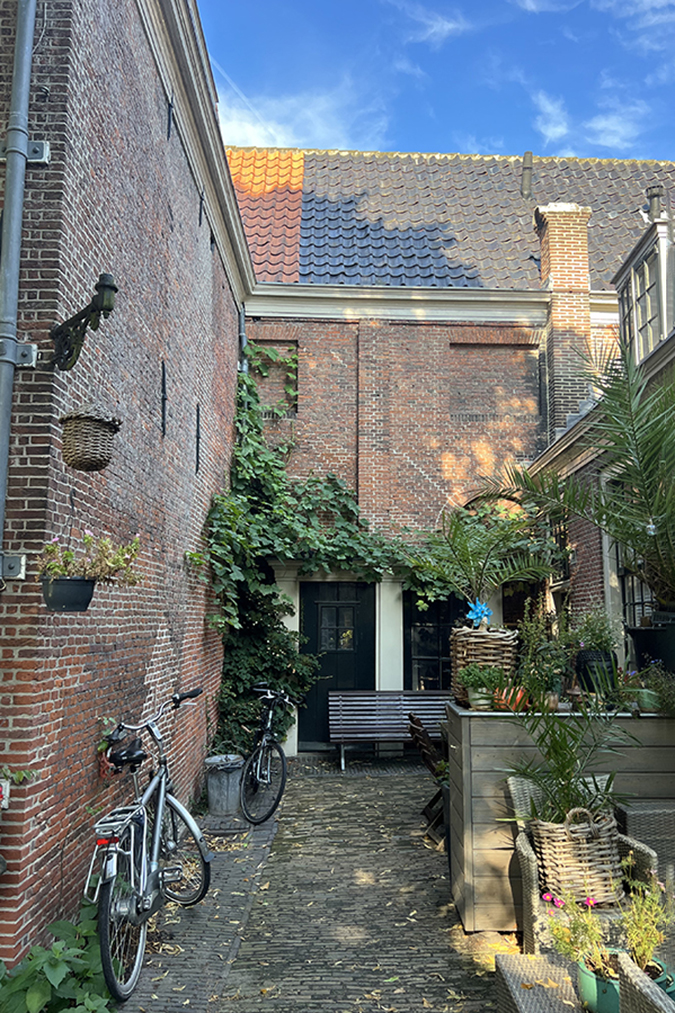 Below: Outside the ‘hofje’ was a big flower stand in the main shopping street, surrounded by terraces. Such vibrant colours. In the Netherlands flowers aren’t expensive, which is why I always have fresh flowers every week. 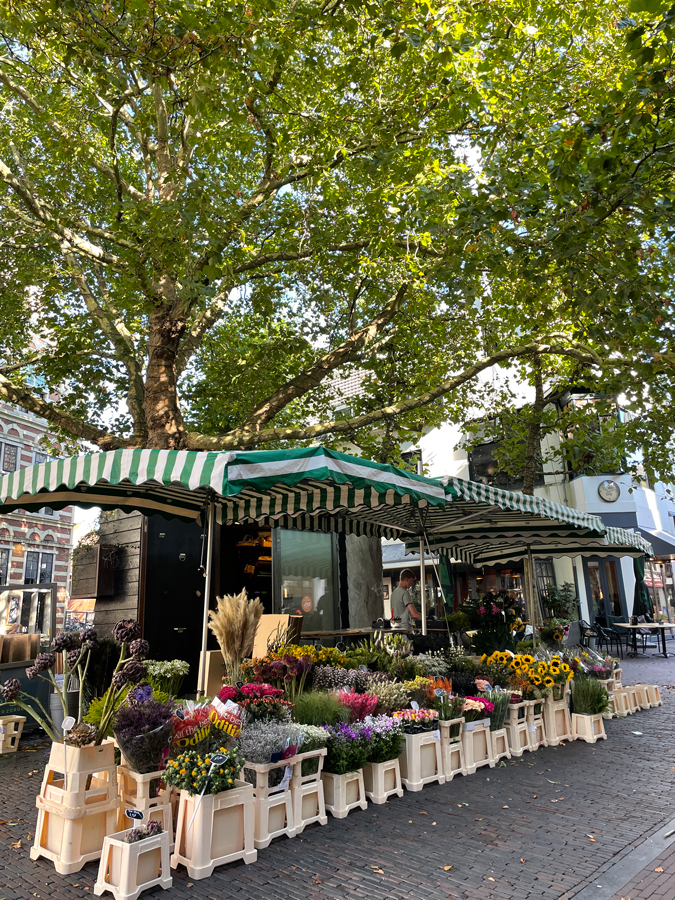 Below: We stopped taking photos for a little while as there was so much noise of the waste container being emptied. Have you ever seen that? The waste container above the street is way smaller than the bit underneath. It always amazes me how they manoeuvre that big truck through those narrow streets.

Below: I so love Kitty’s photography skills. Fantastic photo. 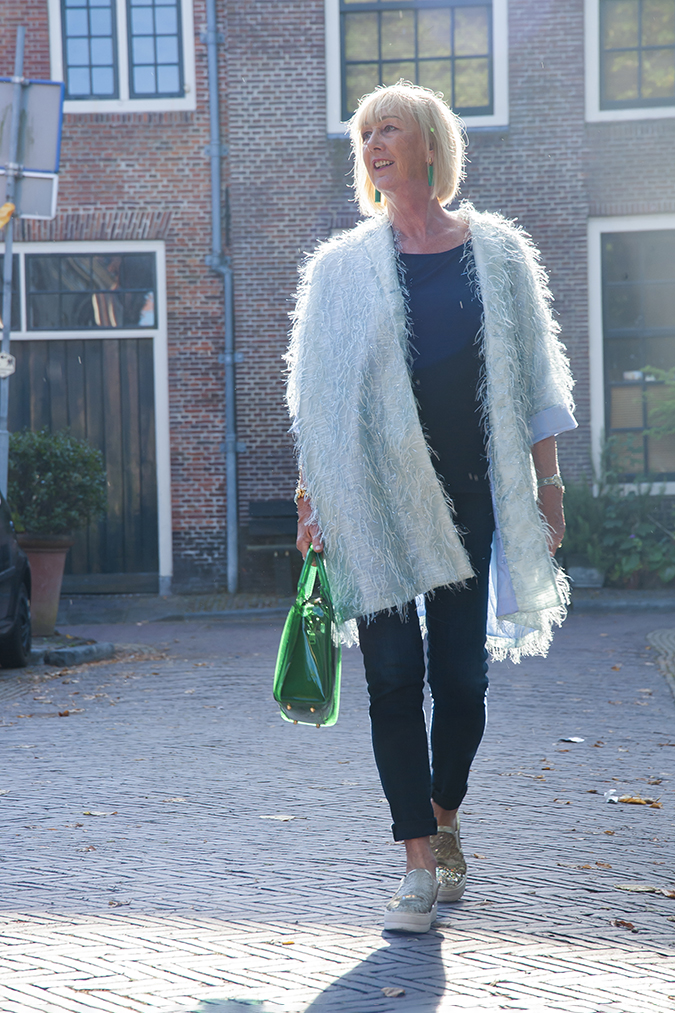 Of course we then had cappuccino on a terrace. Two terraces even.

Below: Kitty on terrace numero uno. 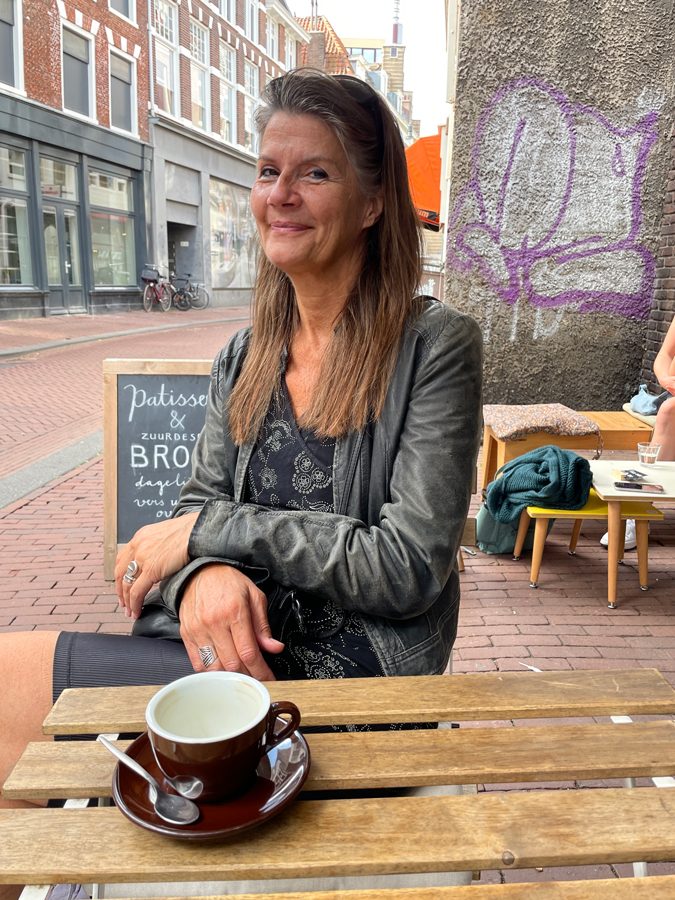 Below: Me on terrace numero due. I had changed into my most comfortable summer dress as it had become hot. 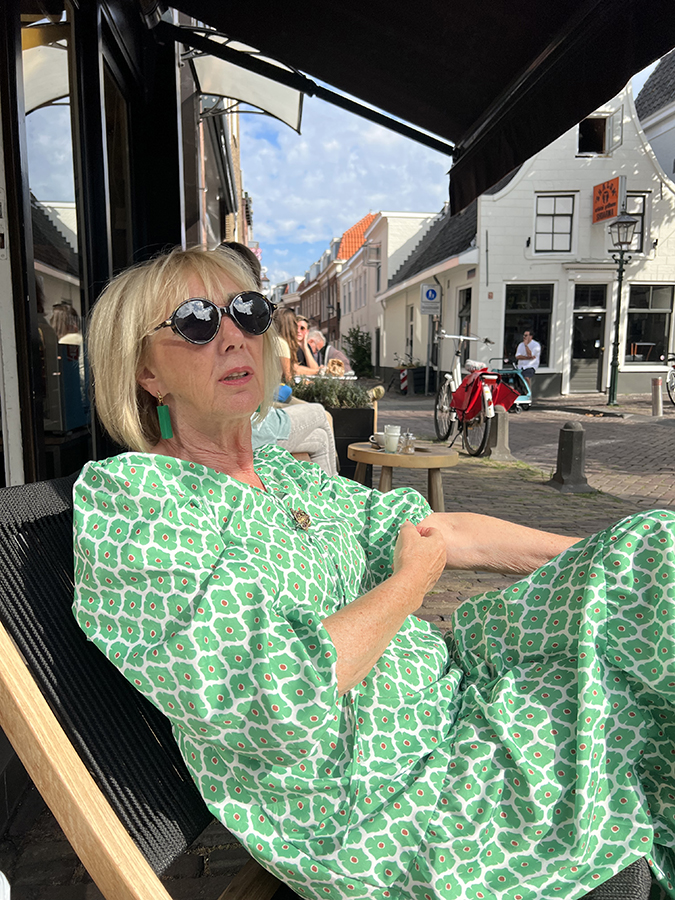 Saturday I took mum to her hearing-aid technician. He checked a lot and ordered new devices but the general verdict is that she is slowly losing her hearing. Let’s hope very slowly.
We had lunch together and I took her to the supermarket, which was nice for her. She got to see for herself what was on offer instead of making a list for me to fetch it. Below: mum, caught eating a cookie. 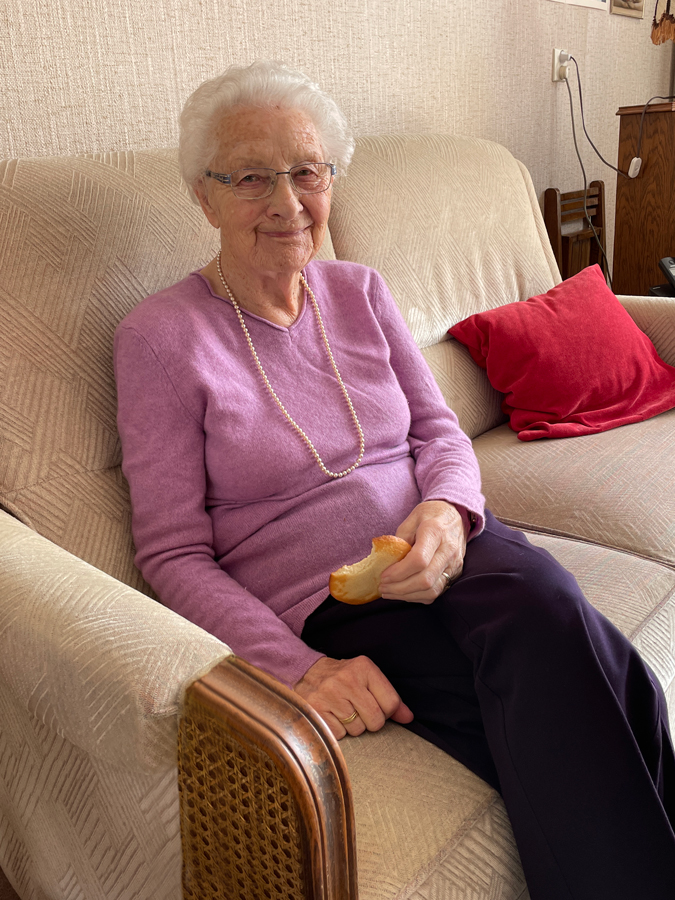 Sunday. Haven’t got the faintest idea what I did on Sunday.

Monday was my day at the dentist. Filling the molar wasn’t bad because he gave me anaesthetic. However, the molar on the other side of my mouth was hurting so he had to take a look at that one too. I threatened the dentist to bite his finger off if he dared touching it.
My threats never impress him much, so he laughed and went ahead. Luckily it was only an inflamed gum and no biggie. By Wednesday the pain was gone. Below what I was wearing that day. (Link to original post.) 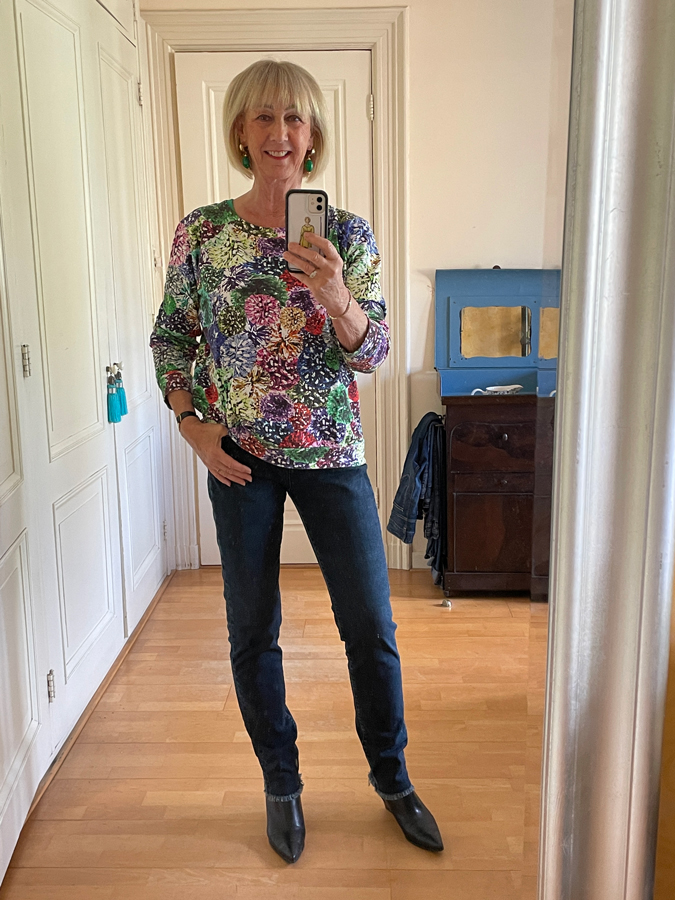 Tuesday I met my friend Ineke in Amsterdam. She was a colleague of mine at the advertising agency where I worked at the time (in 1981). Most of my friends used to be colleagues which isn’t strange if you bear in mind that I always worked full-time for 49 years. We saw an exhibition in the beautiful Hermitage. Below: Ineke who is of course very interested as she majored in art history. You will see more of her when I post the photos she took of my outfit. It was a day with a lot of laughter. 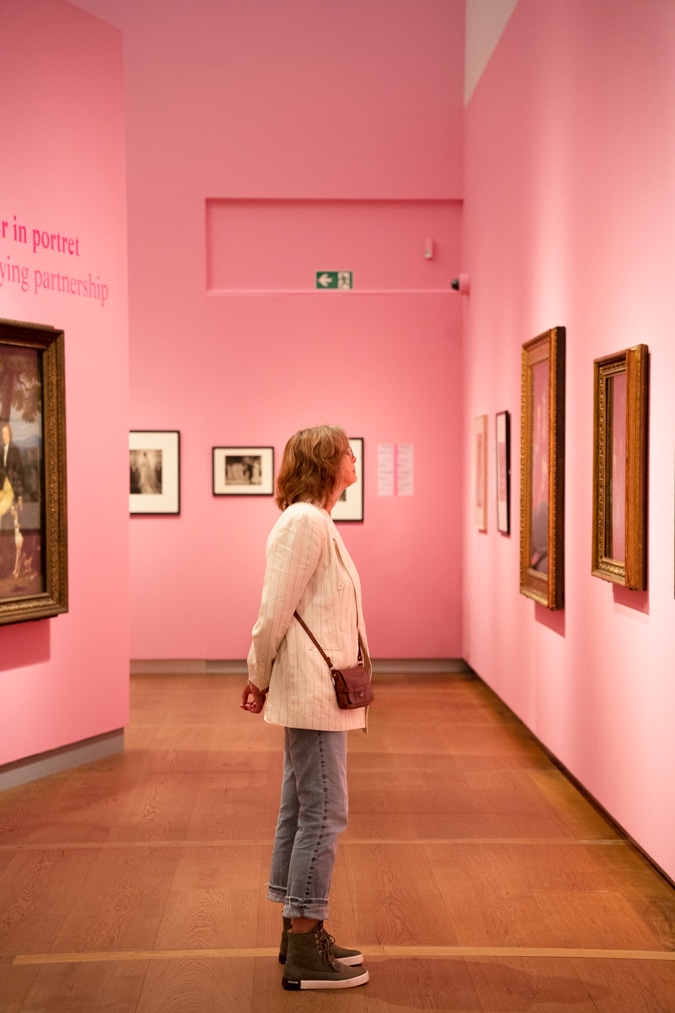 Wednesday the garage called me early in the morning to inquire whether I was still coming. Blast, I forgot the appointment to service my car. Luckily I was already dressed, so it was a matter of jumping in the car and a 10 minutes ride. The first cost estimate was almost half of what I had put aside for it but in the end I had to pay twice the estimated amount due to two new tires and a new windscreen wiper. Blast again. It wasn’t that I hadn’t put the money aside for this, it was that, in my mind, I was already putting the difference into paying the credit card debt caused by the new bag.

I set myself down and ‘counted my money’. In other words, I took a long hard look at my spendings this year and decided I really have to cut down on spending money. As a pensioner my income in fixed for the rest of my years unless I start working again (not very likely). So I shouldn’t dip into my savings as much as I have done. New resolution, although one I have made a hundred times before and failed to keep. Let’s see how I will do this time.

At noon Karen visited me in Haarlem, returning my visit to her in The Hague. We had coffee, lunch and a wander through my lovely city. Lots to catch up on.

Below: Of course we wanted a photo of the two of us. I suggested to have our photo taken while we sat down… 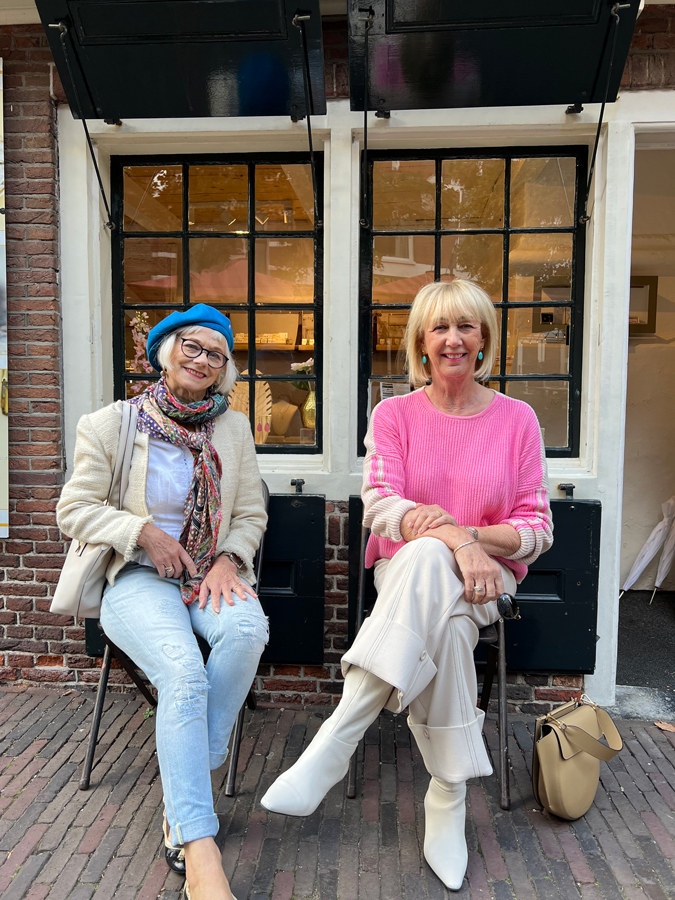 Below: …but she insisted on another photo of us standing next to each other. We are very different in height haha. Not flattering for me but funny and that prevails. (Link to original outfit post.) 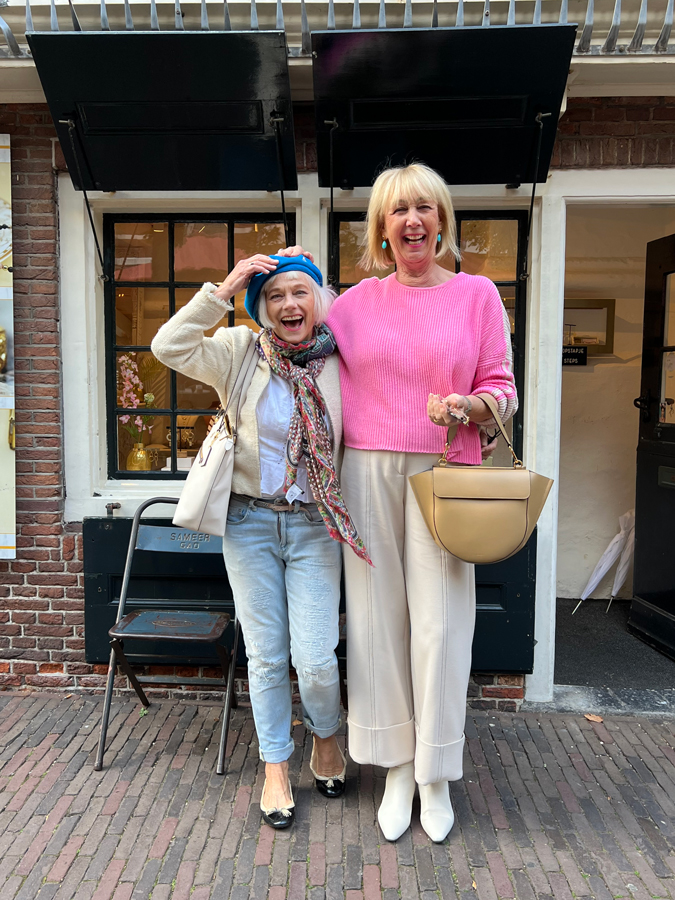 Thursday was a quiet day with running errands for Ron and generally helping him where I can because he is so busy at the moment with work.

Friday was destined to be a jolly day with a photo shoot by Kitty in the afternoon and dining out with Ron at night. Both of them felt very much under the weather and cancelled. So it was a boring day. Never mind.