Oversized men’s blazer in the rain 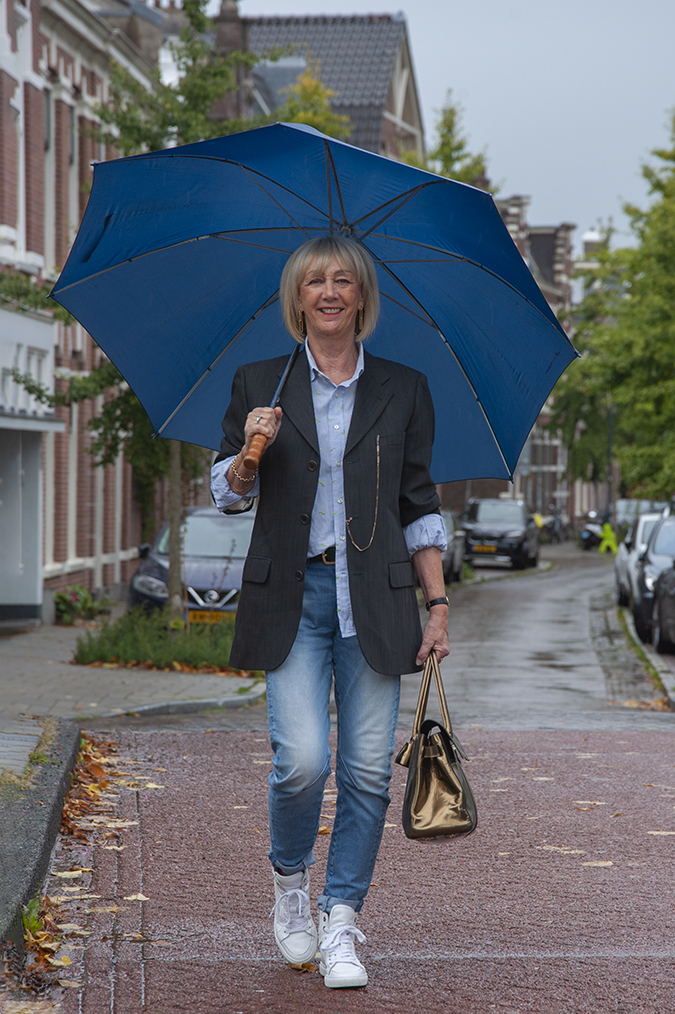 Whenever you are looking for a (holiday) home and you see one in a nice green area, be aware that the area is green for a reason. That reason being: it rains a lot. Like in the Netherlands which has many green trees. Some summers, like the one just past and the one two years ago, were hot with hardly any rain and it brought on all sorts of problems. Like saltwater streaming into the rivers, foundations of houses cracking, dikes crumbling. Very nasty things. We are prepared for rain, not for drought.

We are also not prepared anymore for flooding which happens a lot these days. Clearly the climate is changing. In the old days a very wide strip of land on either side of the rivers was left bare to handle flooding. Then we managed the water so well, we got cocky and started building houses on these strips of land. Not such a good idea. They will probably find a way to manage it again as the Dutch are good with water but still, these are strange and scary times.

Kitty had a few hours on a Tuesday to do a photo shoot and it rained cats and dogs that morning. We went anyway, hoping for a dry spell.

Below: To give you an idea of the weather, watch this 37 seconds’ video.

If you are not British and are wondering what “brass monkey’s weather” means, here is the explanation.
It is used to describe cold weather and the saying derives from the traditional Navy phrase “cold enough to freeze the balls off a brass monkey”. This references the brass structure or ‘monkey’ where cannon balls were stacked. When I was 22, I worked for 2 1/2 years with English people in The Hague, who didn’t know a word of Dutch and I picked up quite a lot of slang.

We sat in the parked car for an hour before the worst rain was gone.

Below: I took my wonky but big umbrella and ventured out. It was much worse for Kitty who was standing in the drizzle with her valuable camera. The earrings are by Lara Design (as usual). 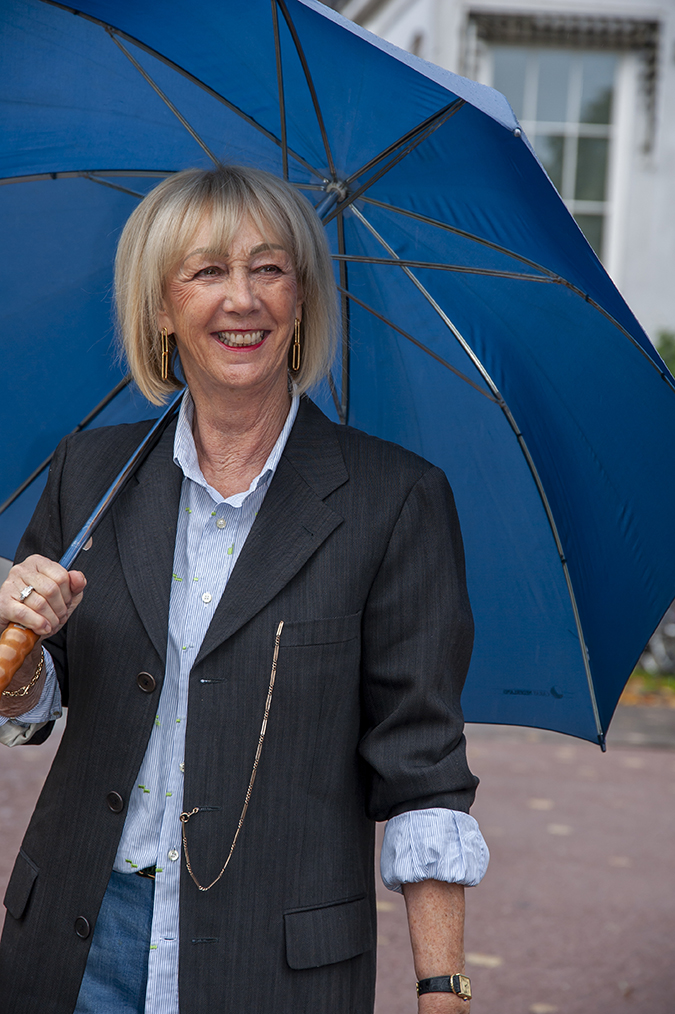 Below: From across the small canal. The bag is a second-hand one. Bought at Vintage No 5 in Alkmaar (for the Dutch). When I bought my neon pink and neon yellow tops in this shop, I saw the bag winking at me (I swear). It is a Mulberry Bayswater Bronze Metallic for those who know these things. It is shiny and I love shiny things. I weighed all the pros and cons (the latter was just the price) and decided it would be a very handy bag which would go with nearly anything as it is metallic. That turned out not to be true. The bag is an attention seeker. You have to be careful it isn’t competing with other items in your outfit. I still love it though. It wasn’t cheap, but a hell of a lot cheaper than new and in very good condition. 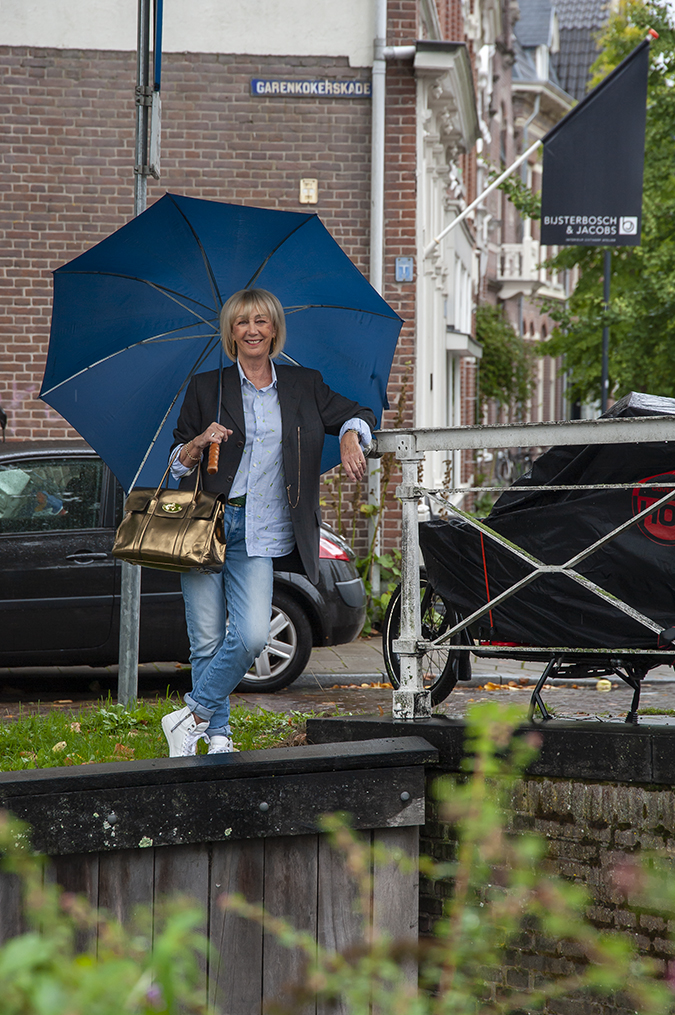 Below: We had fun. 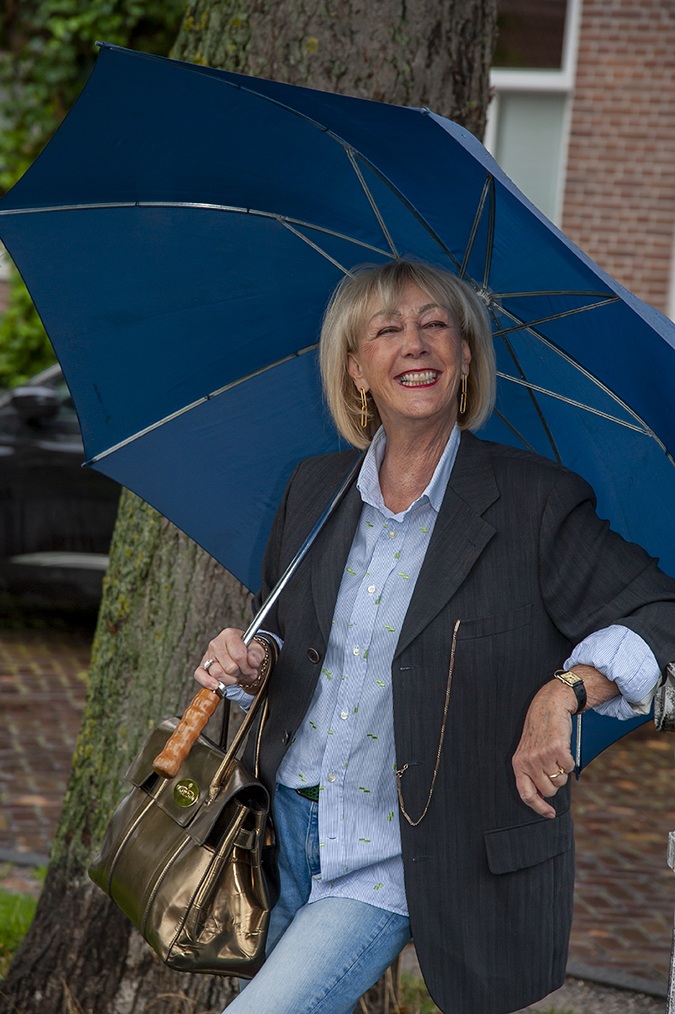 The blazer is a second-hand oversized men’s blazer, although small size. I bought it at a second-hand designers shop in Haarlem (again for the Dutch: Paragons). As an oversized men’s blazer is highly fashionable, I thought I’d try my hand at it and tried on a blazer at random. Pretty oversized. The owner of the shop replied that I was wearing the wrong size when I complained that it made me look like a man. “Try this Kenzo blazer”, she said handing me the one I ended up buying. I loved it immediately. Because there was a slight damage on one of the cuffs, it was very reasonably priced. The damage was no issue for me as I always roll up my sleeves.
The shirt is my husband’s heh heh heh.

Below: I like to stand nonchalantly when I am dressed like this: boyfriend jeans, trainers (sneakers) and an oversized blazer. Kitty gave me permission. That’s a first. Usually she shouts: “I want to see your hand!” 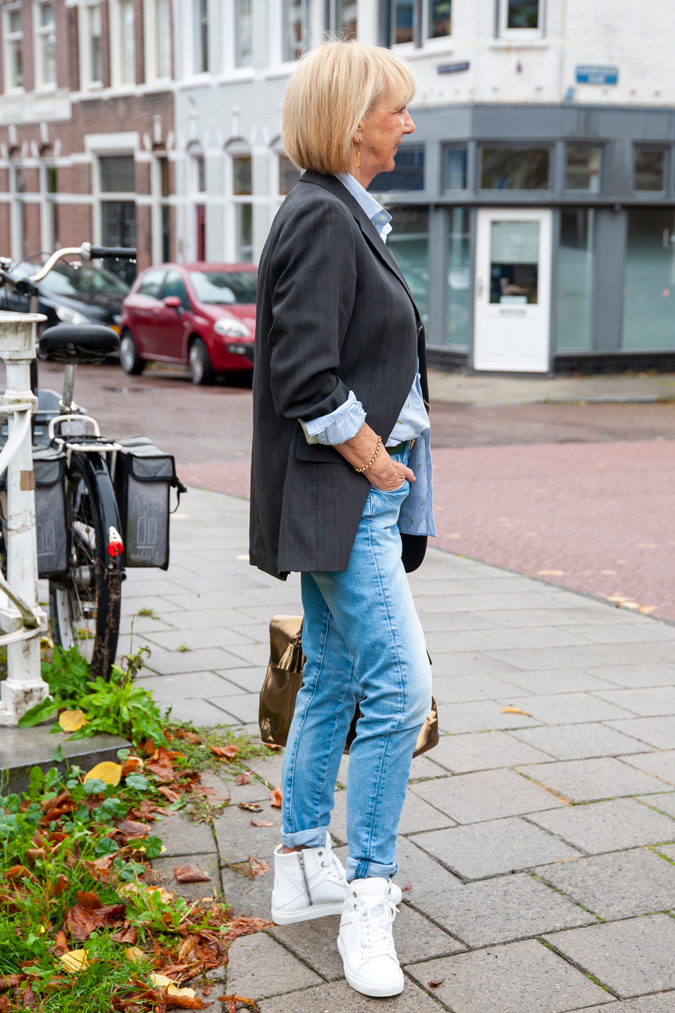 Below: It might be a small size for men, but it is still oversized for me as you can see by the shoulders. 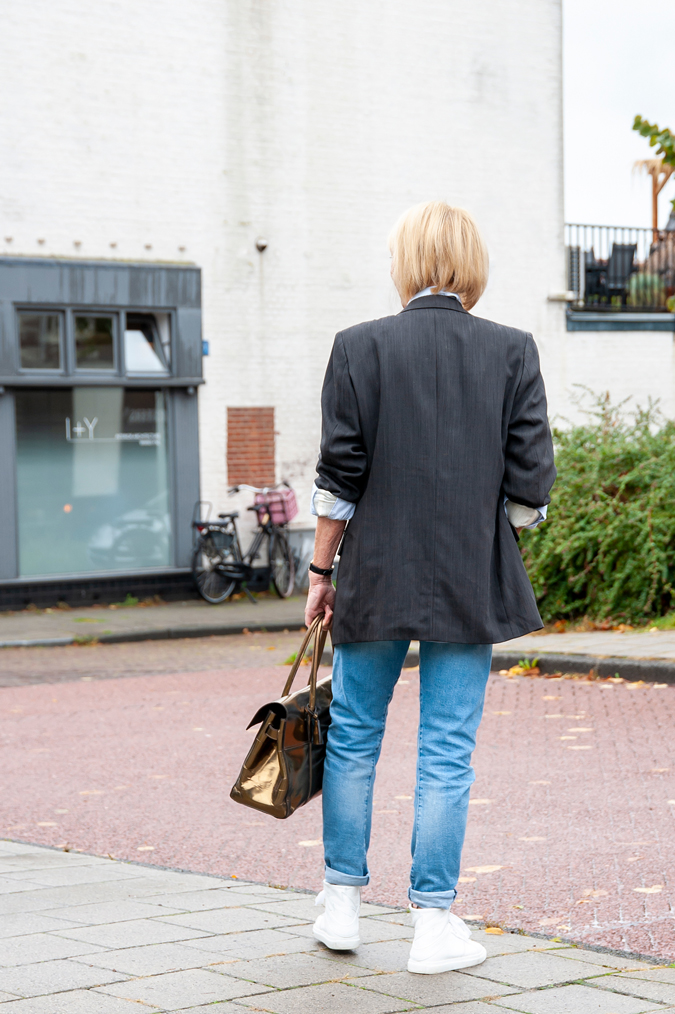 Below: The little antique pocket watch has been in my possession since 1994. I used to have vests with little watch pockets but gave them all away. With this blazer I put the watch in my top pocket which is not really right and a bit dangerous. When you bend down, it falls out and dangles on the chain. 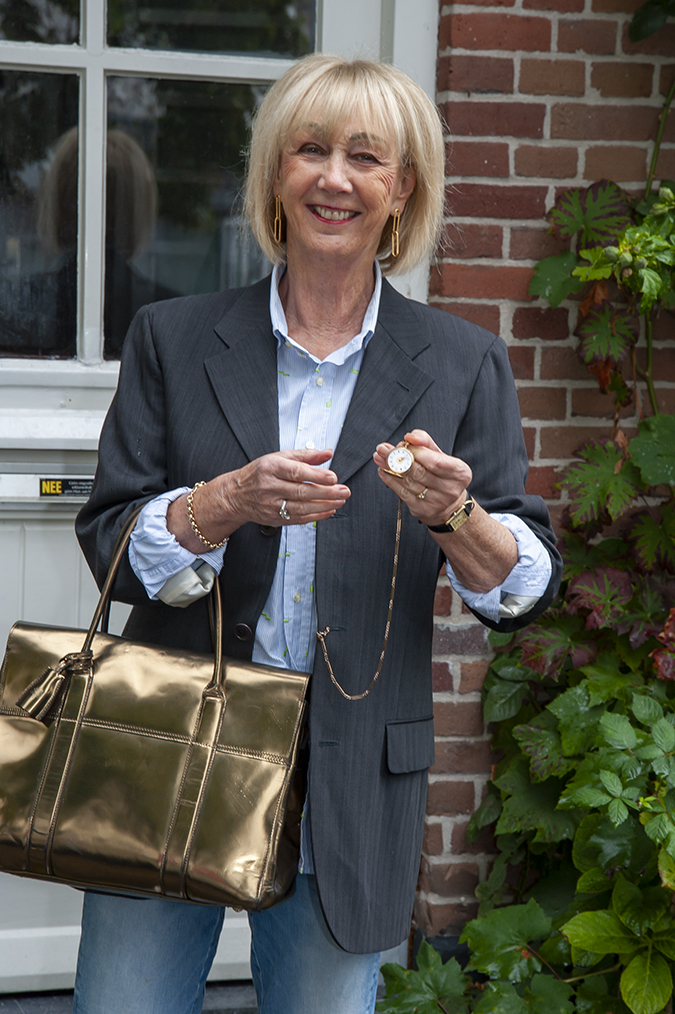 Below: I could wind it but, as I hadn’t used it for a very long time, I couldn’t figure out how to set the hands to the right time. I tried to pull the winding button at the top but it didn’t give and somewhere in my memory was this little voice warning me.
Now, where do you find someone who can tell you how to work an antique pocket watch? Watchmaker is a dying profession.
I got lucky though. Last week I saw an old man in my street of whom I knew he had worked in a little shop with watches and clocks. I asked him and he knew!
See the little black thingy on the outside of the watch, the one above 1 o’clock? You have to push that with your nail and then you can change the handles with the winding button. As soon as he said “the little black thingy”, my memory came back. 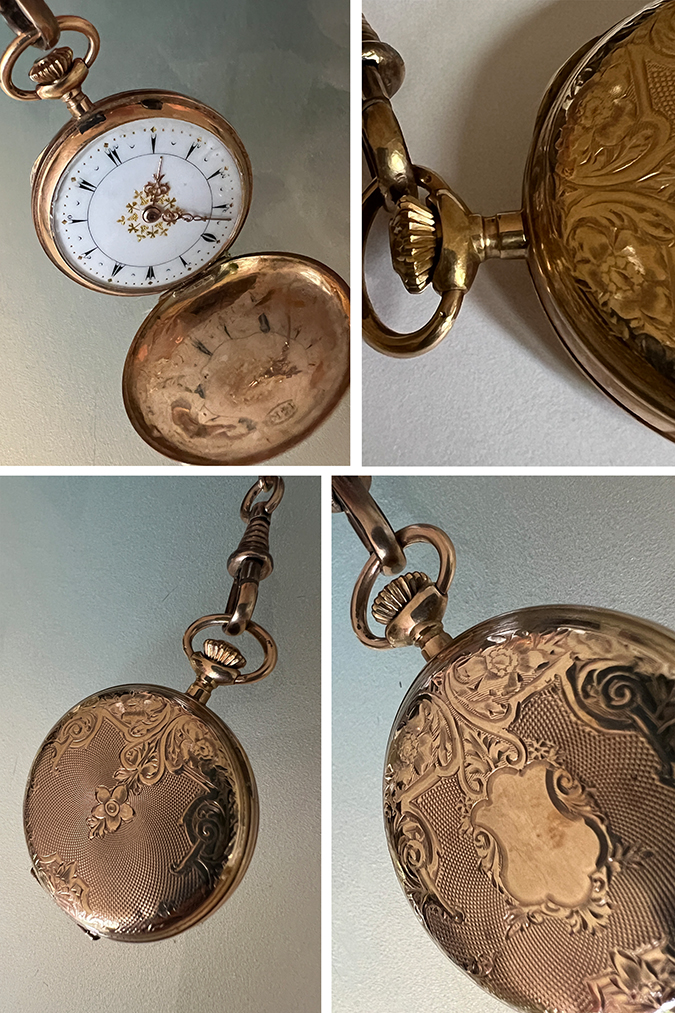 Below: Standing on a bench for a change. It gives you a good view of the bag. 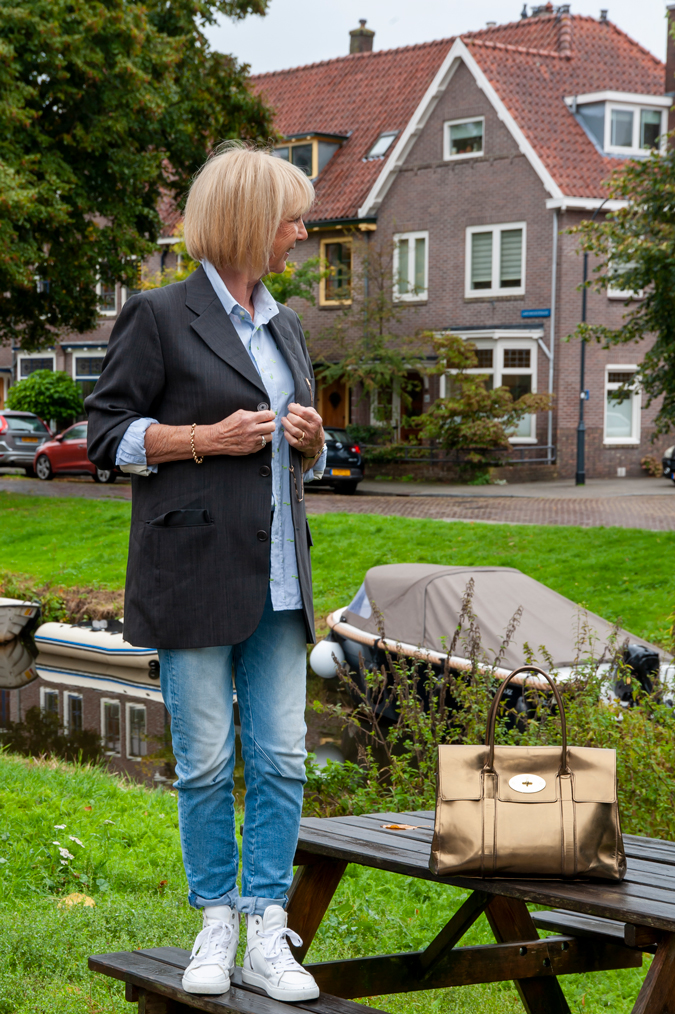 Below: Someone has been drying his sports clothes on this bench haha. Some other time bro. 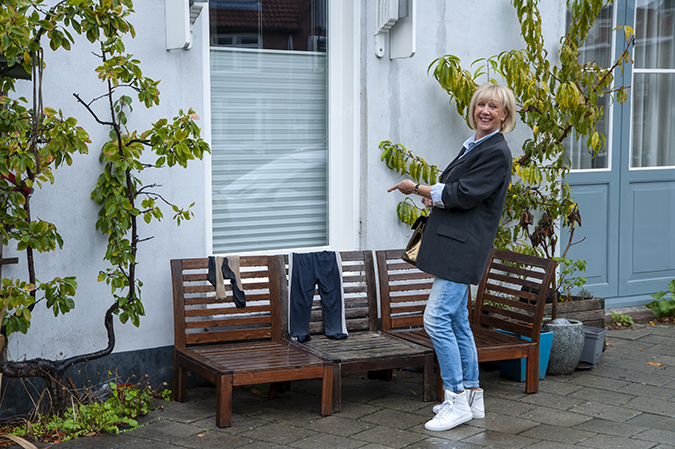 Below: The arm of this bench wasn’t as wet as the rest, so I could put my tush on it. Checking the sky to see whether it would rain again. 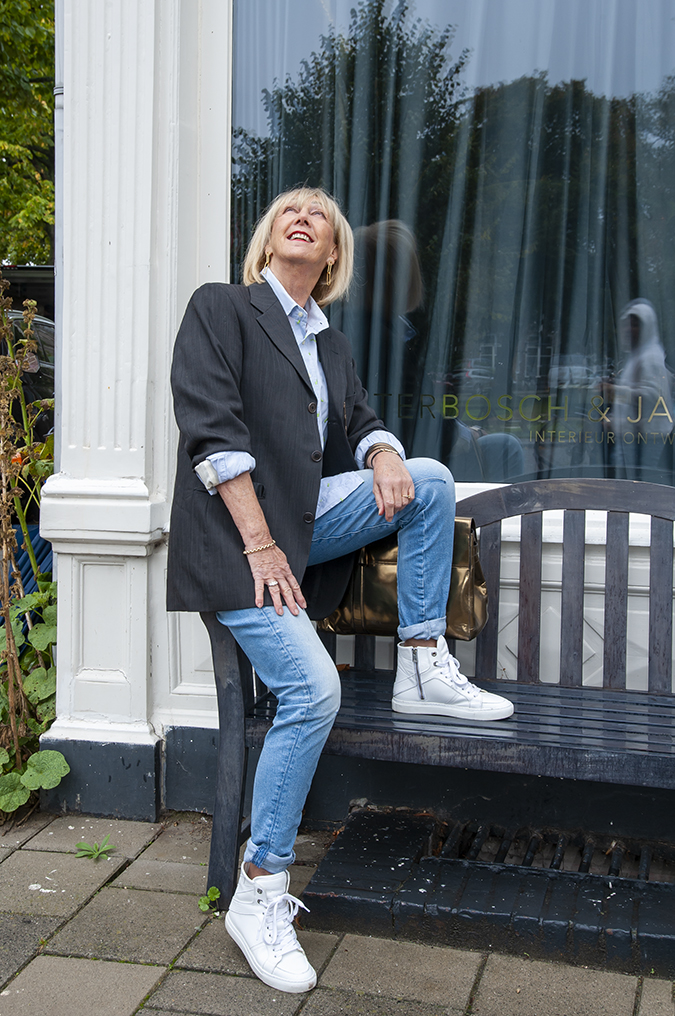 We had half an hour and that was it.

Below: Getting drops of water from the tree on my head. 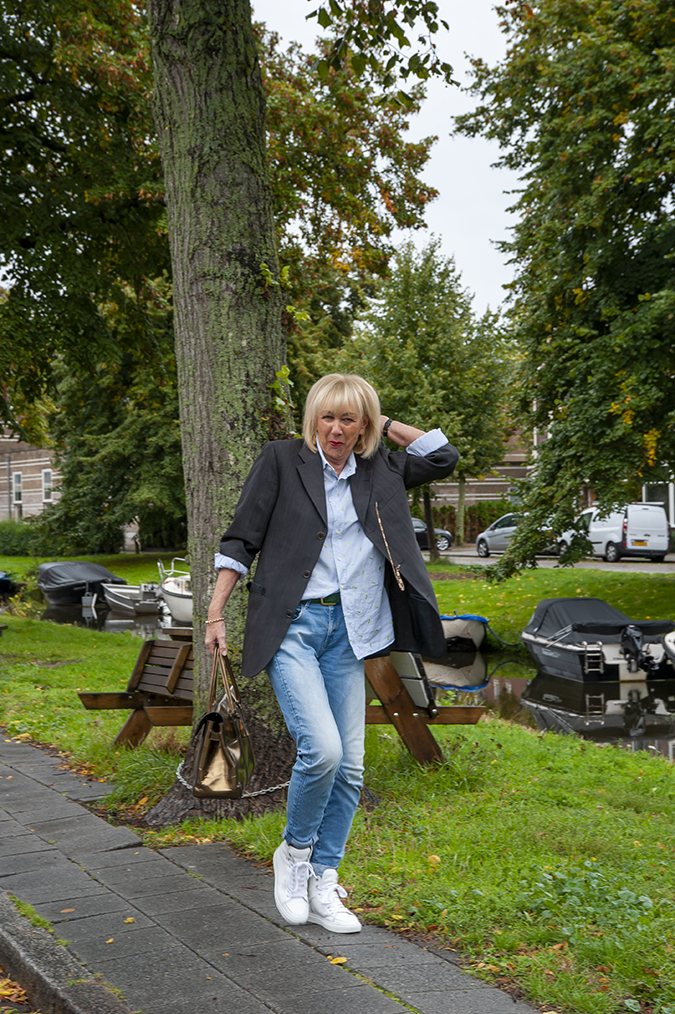 Below: Close-up of the shirt embroidery and the blazer fabric. 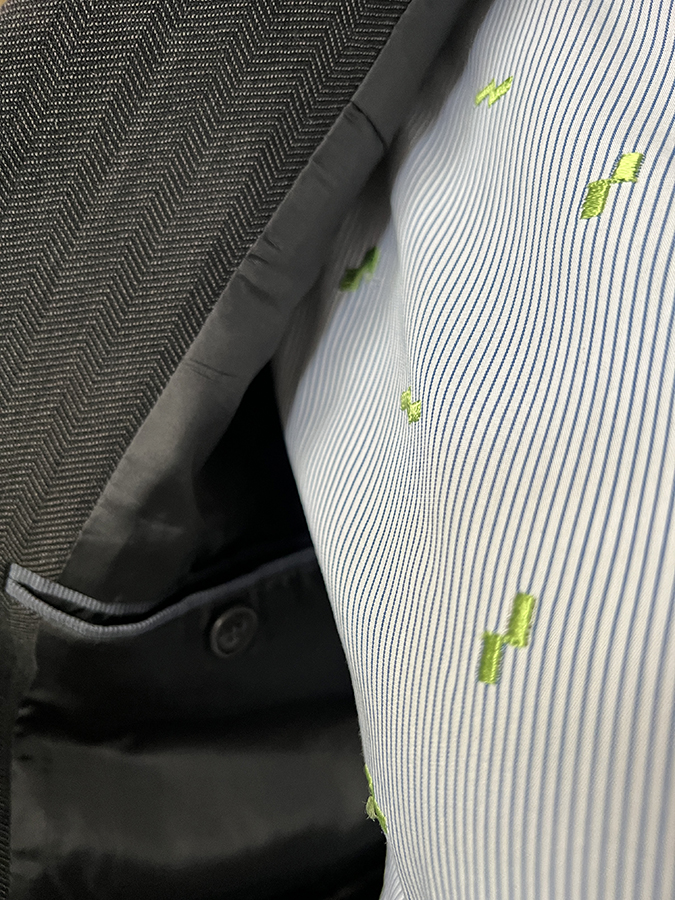 Below: Here she is again. My fearless and highly skilled photographer, Kitty. 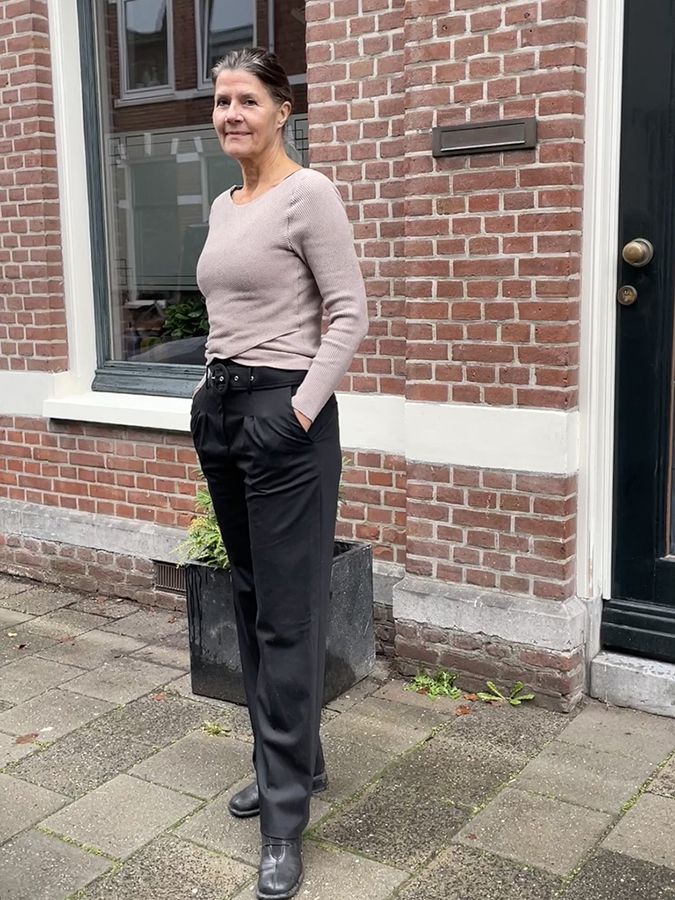 It is like it always is. When we think it is going to be a terrible photo shoot, it turns out to be fab.

Below: This is what it could have looked like grrrr. I took this iPhone photo the next day when it was beautiful weather. 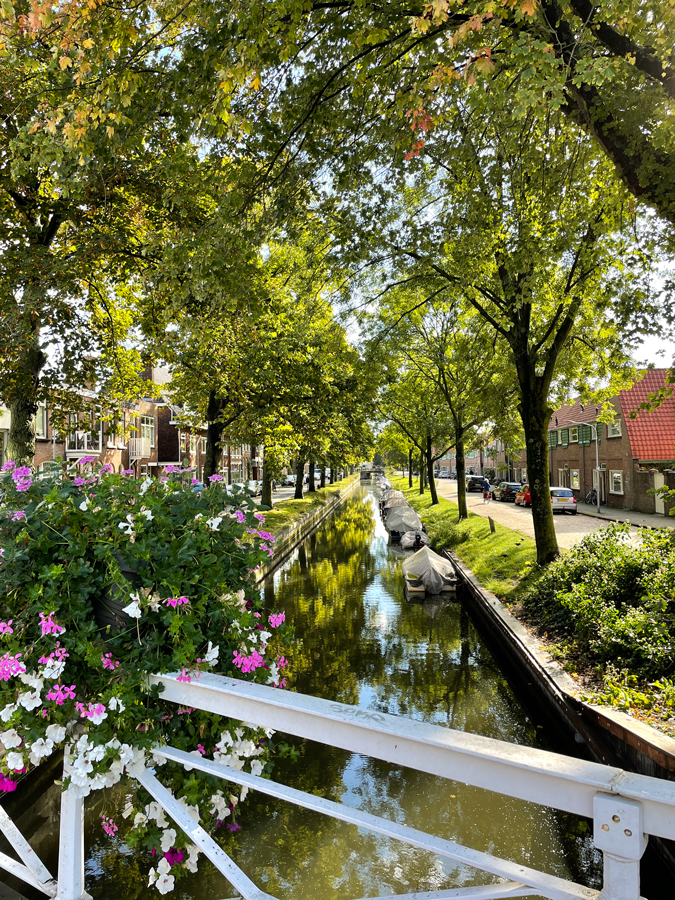 Saturday was another great day with Anke and Sabine (the three of us are the Shopping Saturday ‘group’). We shopped in Amsterdam and the weather was beautiful. Sabine took 295 photos which I have to reduce to a much, much smaller number for a blog post. I am now down to 50 and will keep on ‘killing my darlings’.

Below: Of course I cannot show you the photos we took as that is for a blog post, but this one of a street in Amsterdam gives you an idea of the mood. I so love Amsterdam. 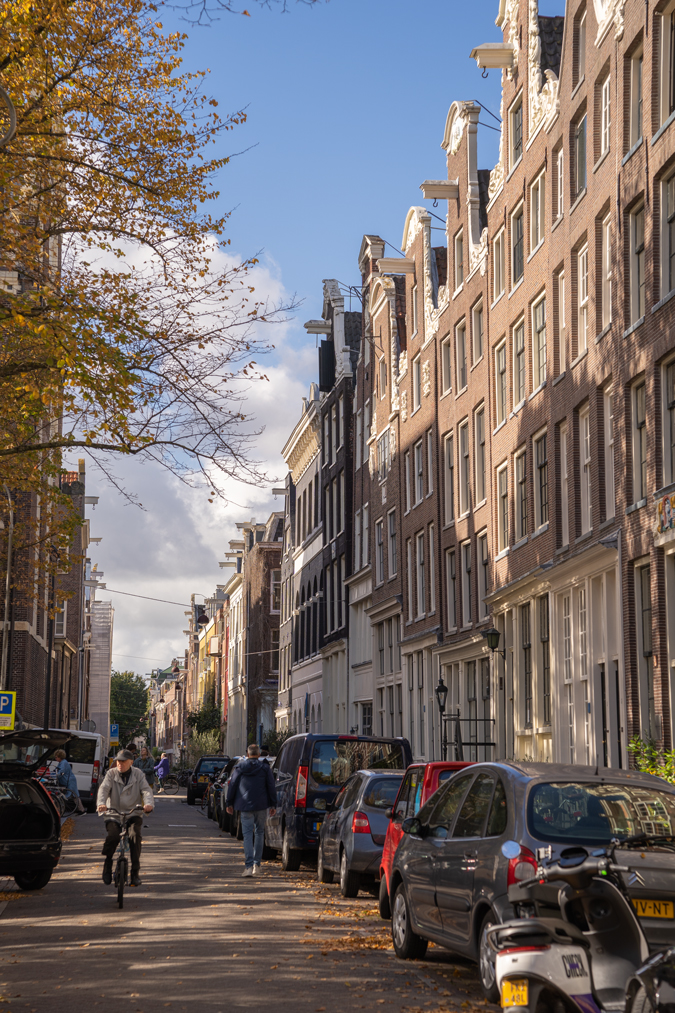 Sunday Ron put a new bolt on mum’s front door. She can now open the door a crack and the bolt will prevent a person entering without her permission. Below: we played Rummikub again. 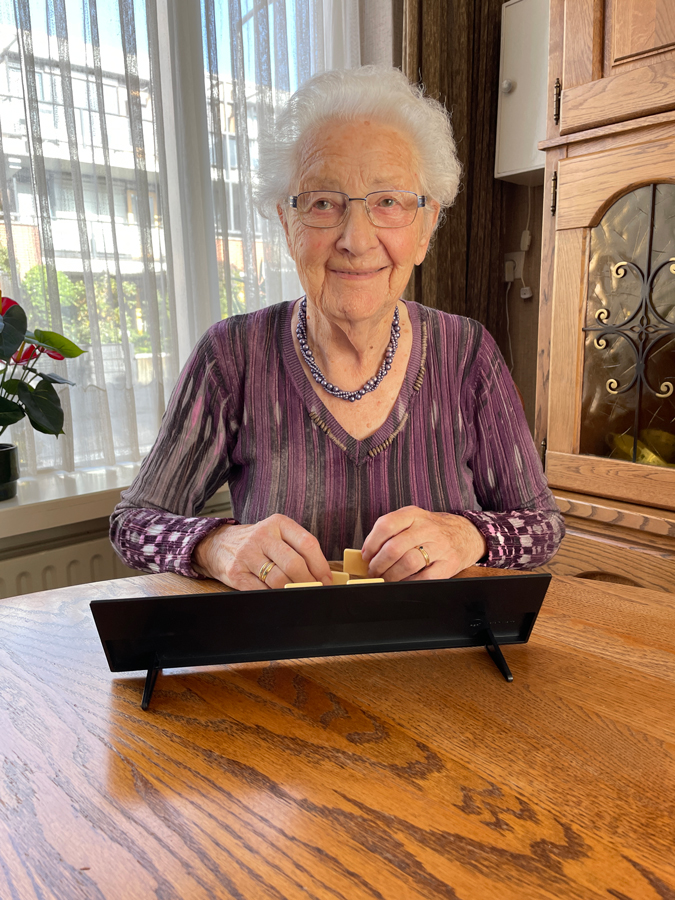 Monday was a very quiet day. Fitness, washing my hair, blogging and having the front door open all day as it was being painted. Brrrr…so cold.

Tuesday Kitty and I did a photoshoot in a park (or as I call it: ‘in the woods’). We had a jolly good time and chatted far too long, totally enjoying ourselves.

Wednesday was a quiet day again and the painters finished the work on the front of the house. They did a beautiful job. The door was open or ajar the whole day…pretty cold, even though the sun was shining.

Thursday, the day of my eyelid operation. It was a cinch. The actual operation lasted 10 minutes. Of course the anaesthetic injections weren’t really fun but the hurt was about 10% of the injections I had with the same operation 28 years ago. That has improved in time.

Below: This is how it looked the next day. With my reading glasses on, you’d hardly notice it. Of course, a red lippie helps. 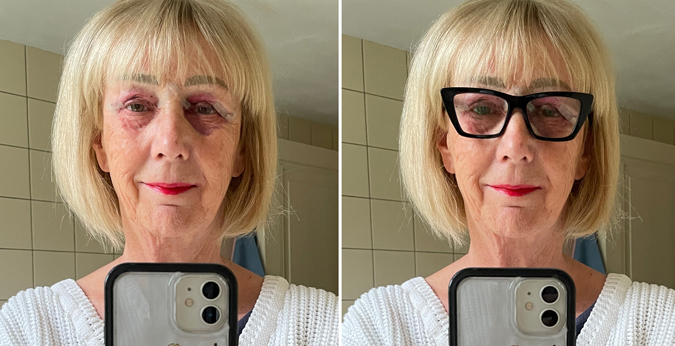 I am very proud of myself for figuring out how to create a collage in Photoshop Elements the way I wanted it to look. Funny how such a silly little thing can make you feel so good about yourself.

Friday was recovery day. Dressed in comfortable clothes, creating blog posts with a cold patch on my eyes now and then. The first day I used the cold patch for 15 minutes every hour to keep the swelling down. Doing this the next day is probably useless but it feels nice.