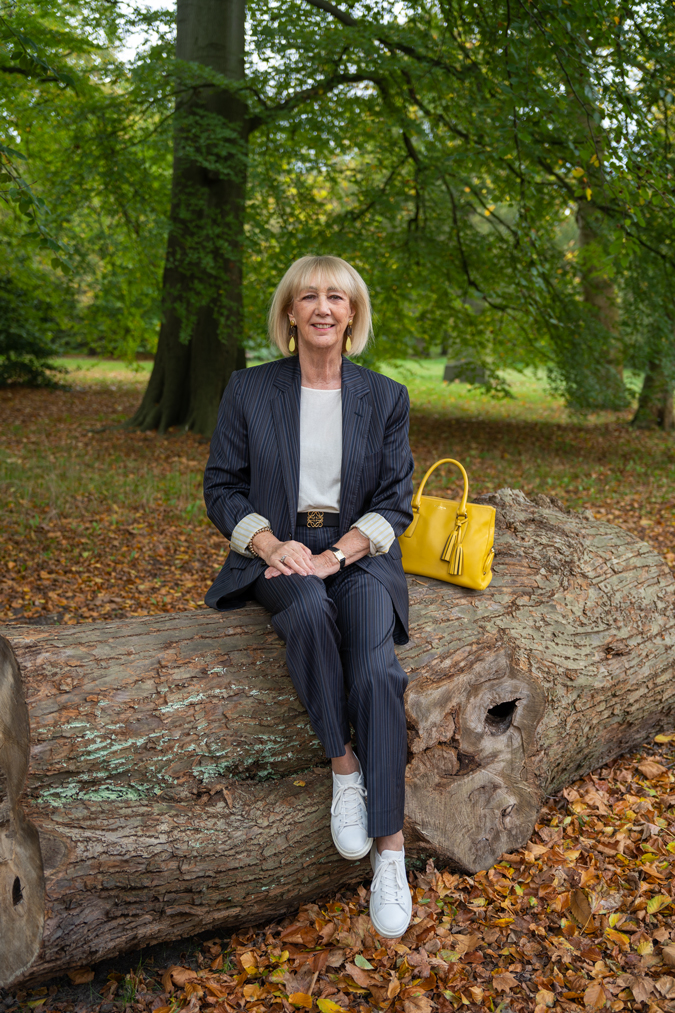 This week another take on a men’s suit, worn by a woman. I am not really into this trend but that Kenzo men’s blazer outfit was one that I really liked. Then my nephew returned an old suit which my husband Ron had given him years ago and I decided to try my hand at it.

It is a suit by Etro from the days my husband wore expensive suits. To tell you the truth, it is rather dull in my eyes; the lining is so much nicer although perhaps a bit much if it was the outside.

Below: Lining of the Etro suit, left and right inside blazer. 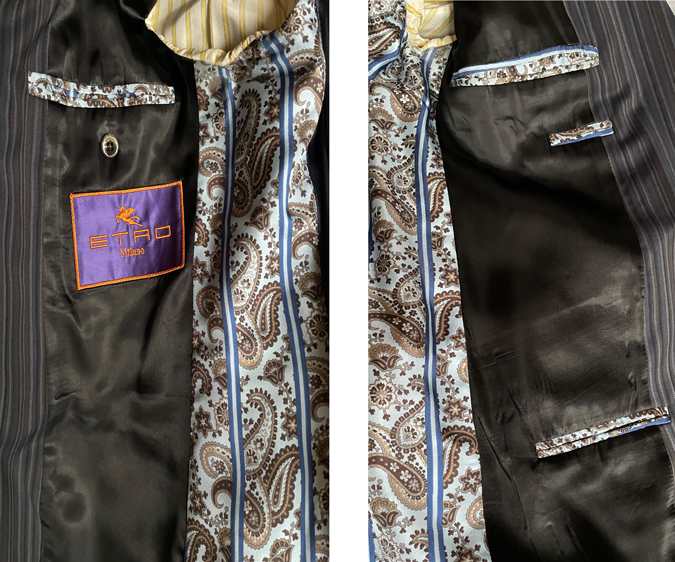 Of course I turned the sleeves up, revealing the striped yellow lining and because of that, decided to wear my yellow Coach bag. Turning your sleeves up means the eye is drawn to your waist, as though a horizontal line is drawn. 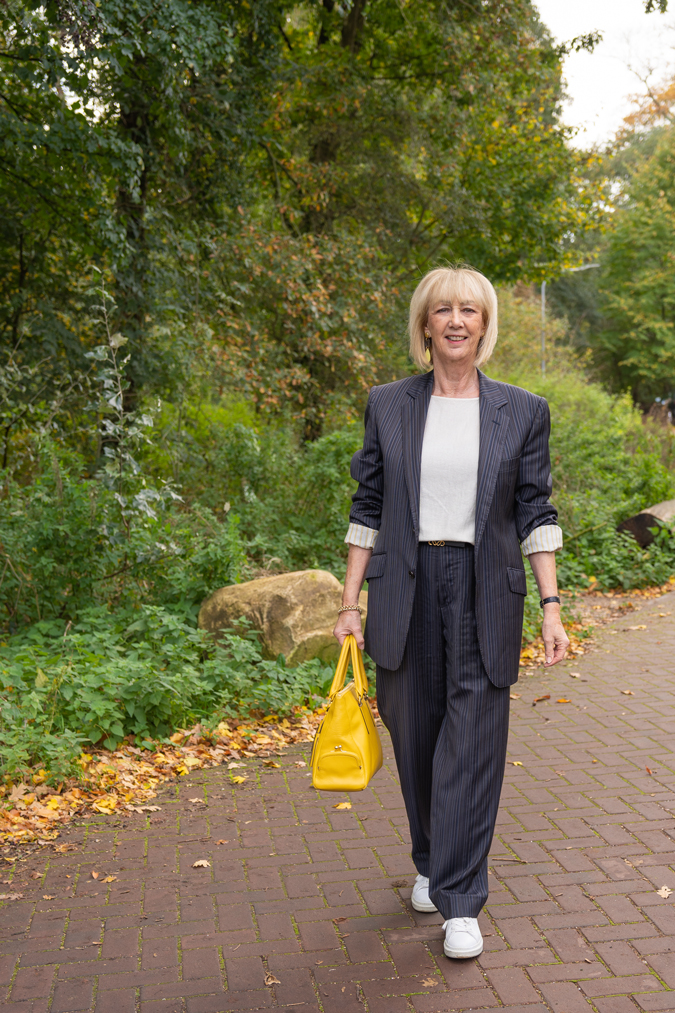 Below: Close up of the Coach bag. I have had this one for about ten years years but I don’t wear it much. It has a little purse pocket on either side, which opens. To put loose change in or just for fun?
I hate the gold letters COACH on it and tried to take the tassel off and move it to the other side where there is no logo but that was mission impossible. I feel if a company wants me to advertise their brand, they should pay me for it. And I would refuse; I am not a walking billboard. 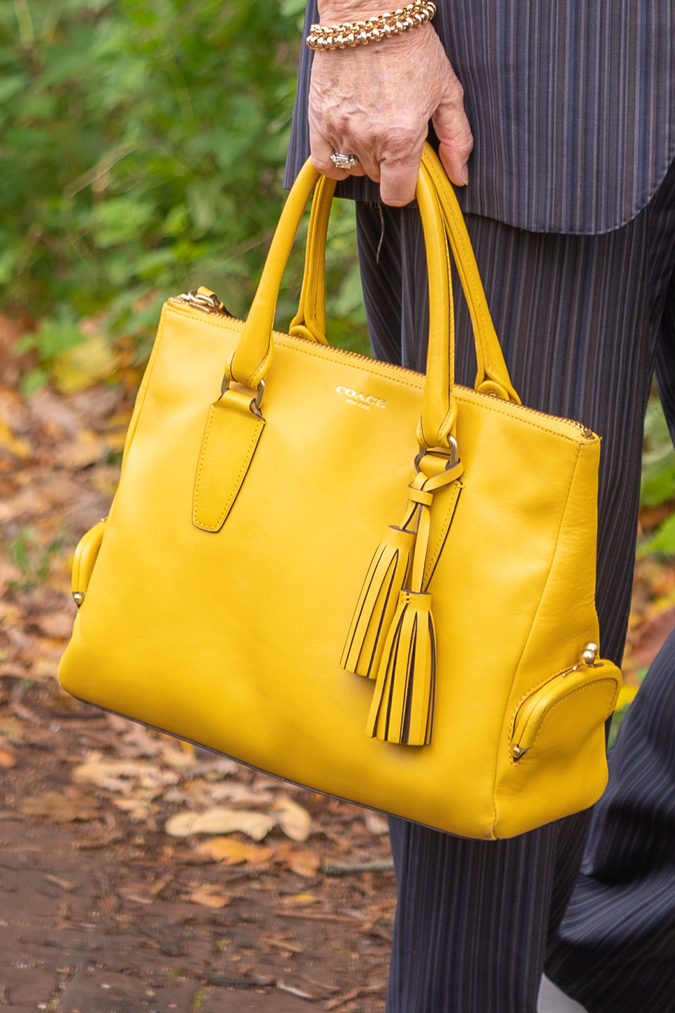 Below: Loes and I decided to do the shoot in a park in the middle of town as autumn still provides such a pretty background with the trees. The park is called Haarlemmer Hout. 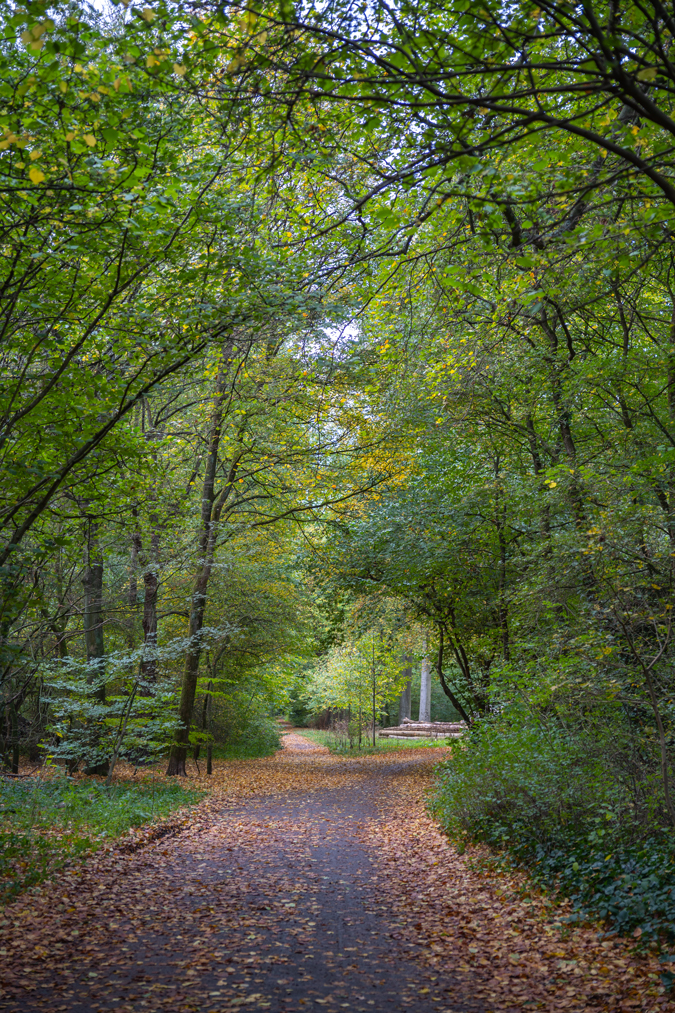 Below: Loes in a very fashionable vest. Later that morning she bought a great brown and cream shirt to go underneath the vest. 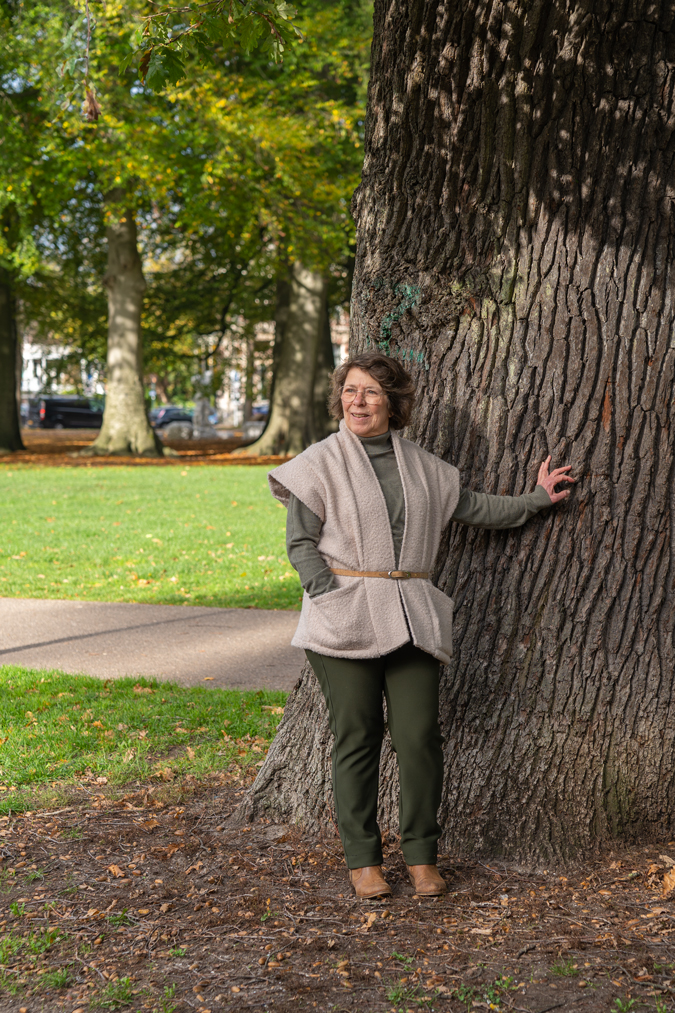 Below: In a lane near the park are very pretty houses, hidden behind big gates and hedges so we couldn’t really photograph them. The one below has been turned into a kindergarten and provided access. 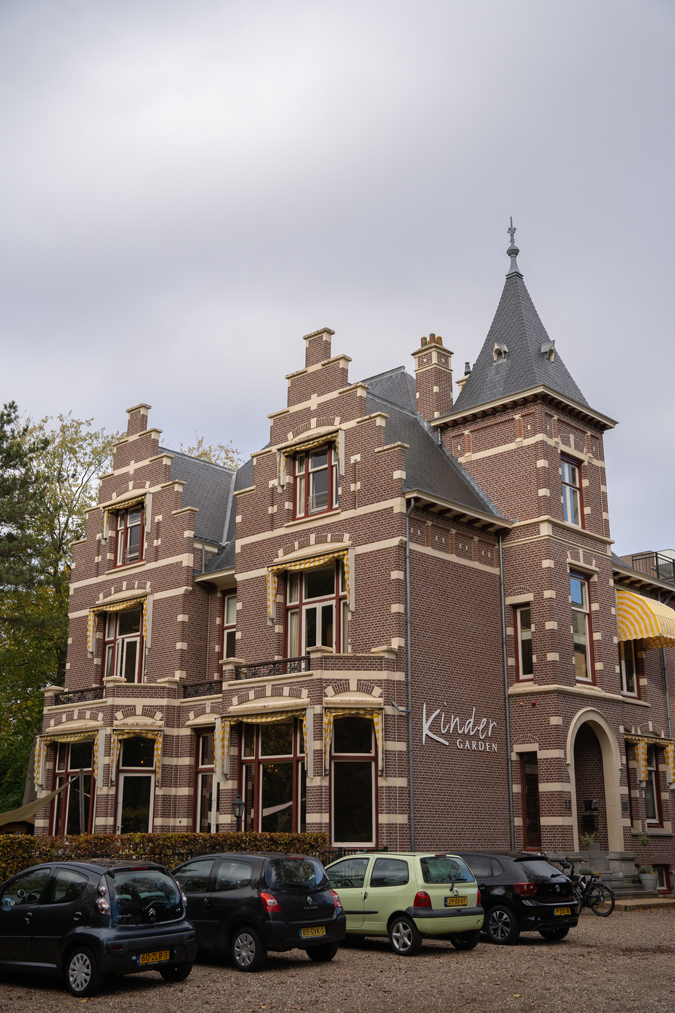 Below: With one of the houses, or better said mansions, we saw a wooden boat through the gate. 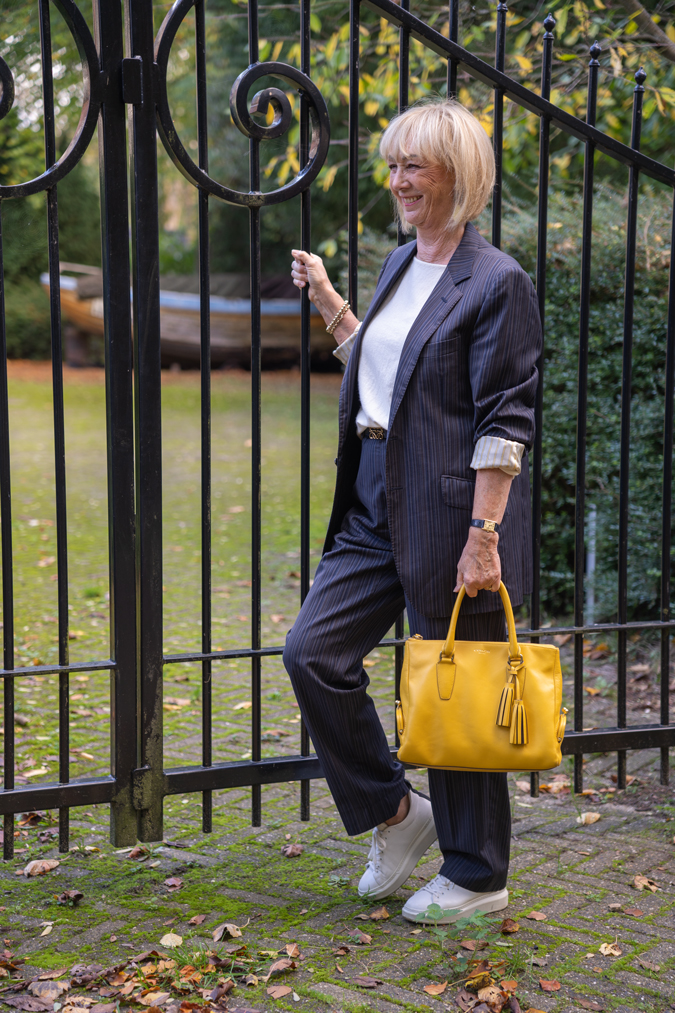 Below: With this row of houses, I peeped over the hedge with my camera. Must be lovely, living here with the park as your view. 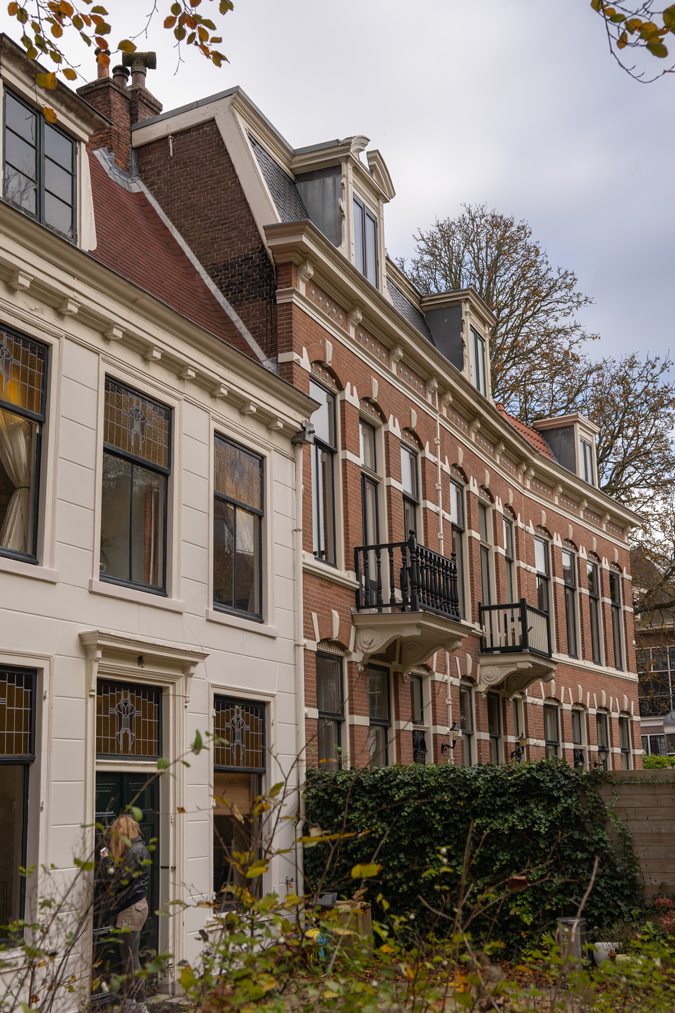 Below: To balance the masculinity of the men’s suit, I chose soft, female accessories like the reversable belt by Loewe, the bag and lime/brown earrings ‘Letva’ by Lara Design.
The soft cream top is by Bellamy Gallery, my beloved sustainable brand. I got a shock the other day when I passed their shop in Haarlem and saw it was empty. They sell online, but I am an old school shopper and very fond of Bellamy Gallery. Luckily they just moved two shops down. Wouldn’t want to miss them; they are great with basics, such good quality. The top looks a bit greyish in the photo, but in reality it is cream/off-white. 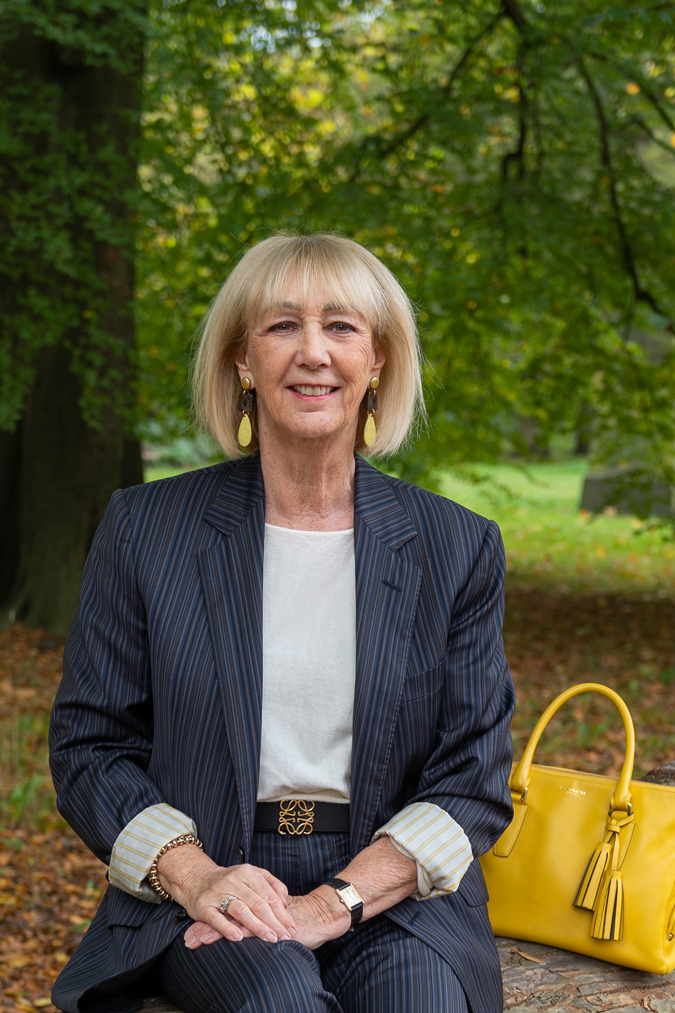 As you can see above, my eyelids have healed and I can wear make-up again. I am not sure about the result yet. I don’t have ‘curtains’ on the outside of my eyes anymore and the little lumps of fat in each corner are gone too. However, I don’t see a whole lot of difference with before. But this is it, I am not going to let anything be done to my eyelids again.

Below: We proceeded to the park where there were deer. 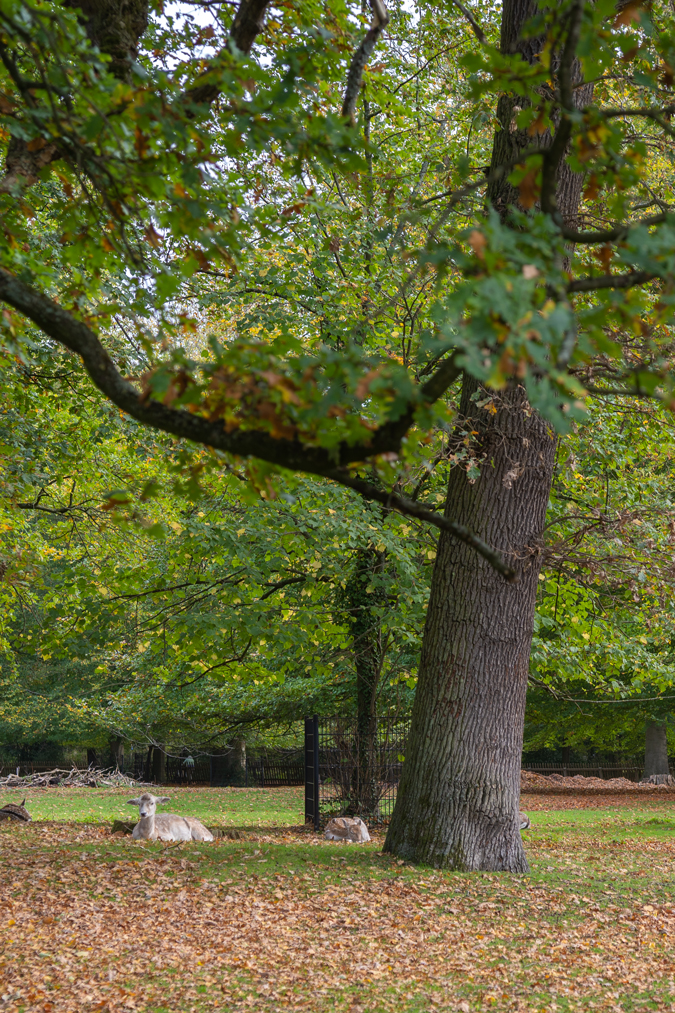 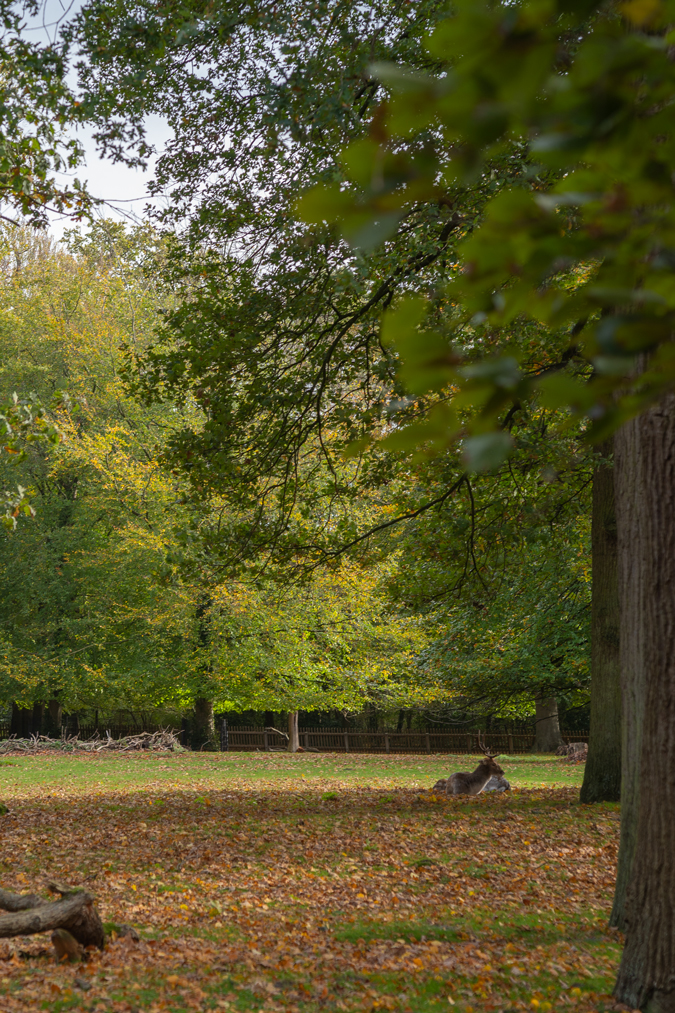 Below: Some sheep with a beautiful ram front and centre. 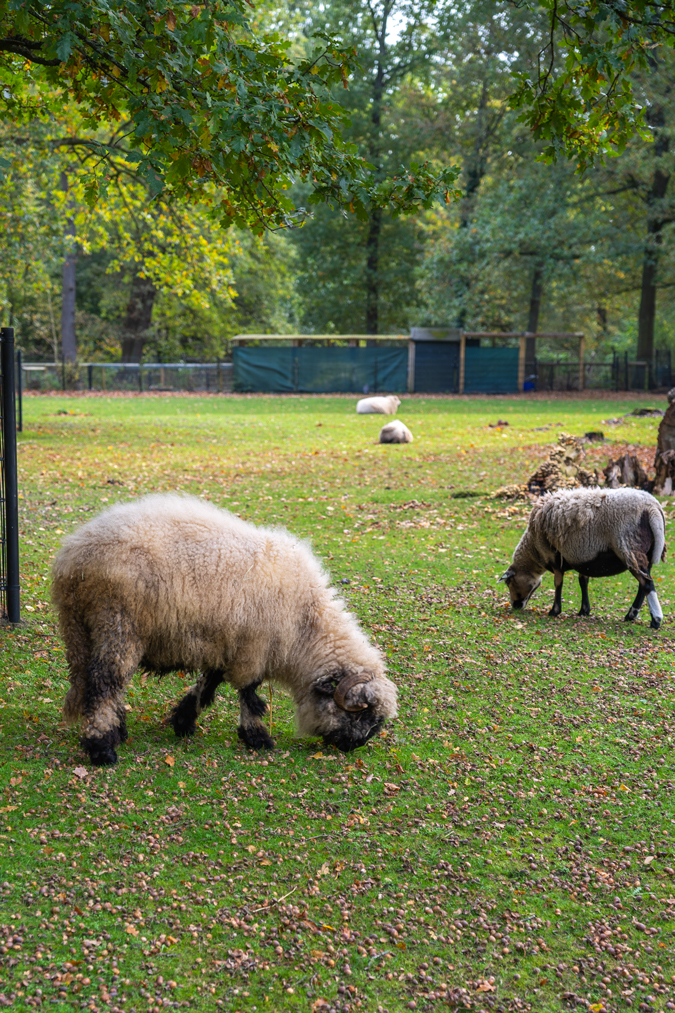 Below: The llama, however, is my favourite. 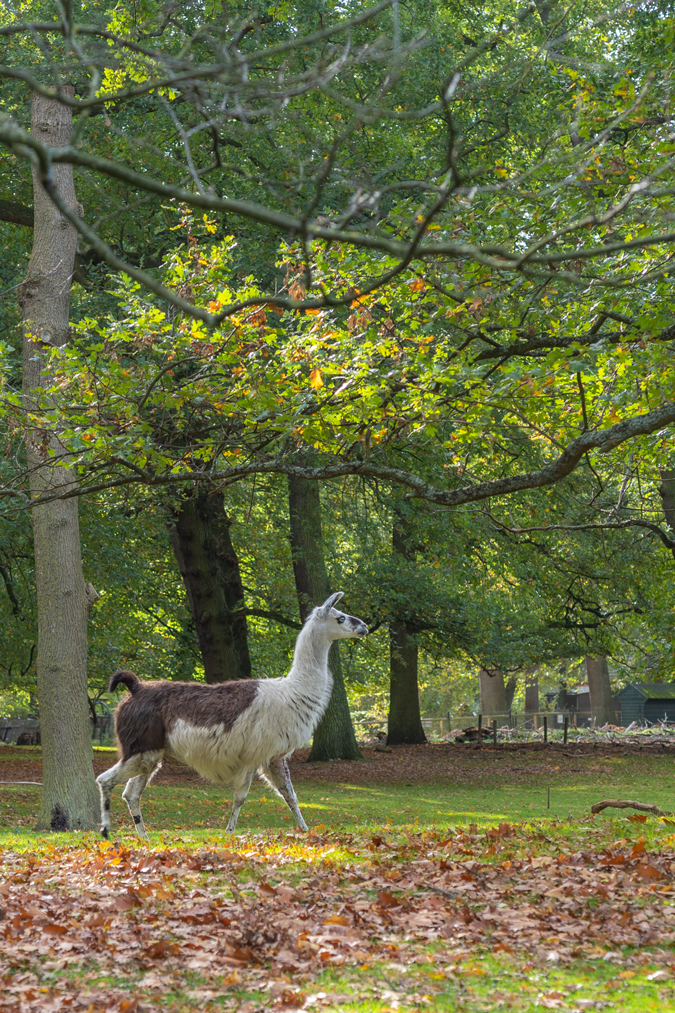 Below: After we photographed him, he hid (conspicuously) behind a fallen tree to watch us. So funny. 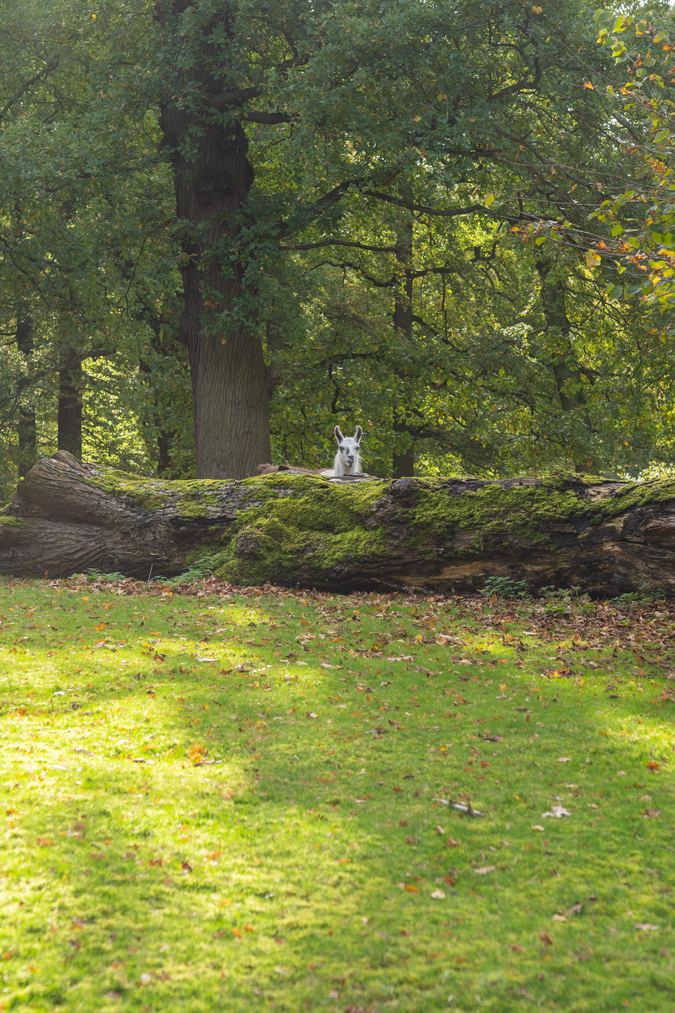 Below: One last photo of the men’s suit. 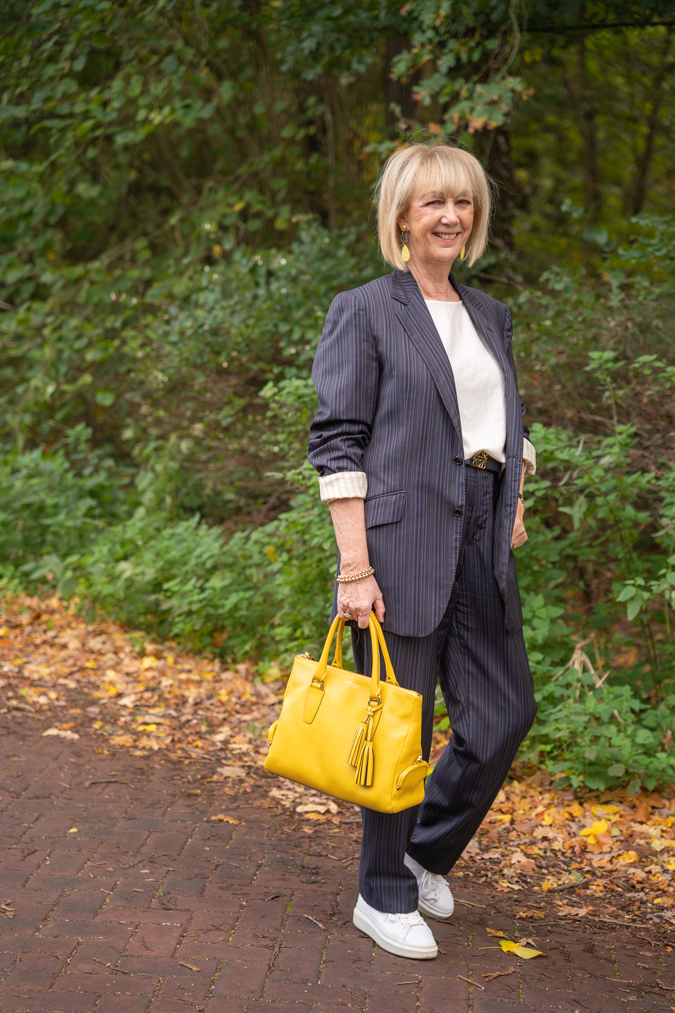 And that is it.

Saturday I went to the hearing aid man with mum. He had a new pair for her which she is now trying out. Installed a new phone in her house as the old one didn’t work upstairs anymore.

Below: Mum in the kitchen. It is a tiny kitchen with a lot of equipment in it, but she is used to it and everything is within arm’s reach. 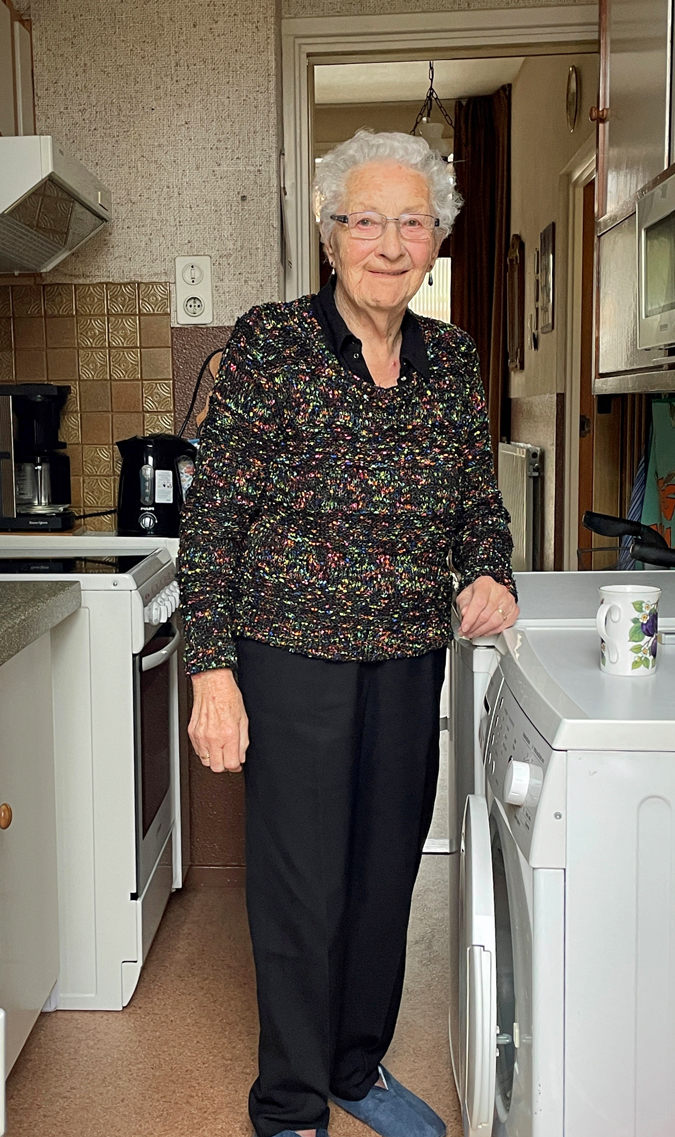 Sunday was a day of leisure and reading.

Monday and Tuesday I spent a lot of time on the phone with our internet host about the Wi-Fi. The technicians who repaired the cable underneath the pavement did a good job but as it turned out, it solved only half of our problem. The other problem was in the Wi-Fi modem. It took the tech guy a while to detect that and we reset the modem to the factory settings, after which we had to set everything back to our customised needs. At last, the problem with the TV app on the iPad is solved. Pffff…

I still get it when these tech guys ask me to do things, but I am so afraid I won’t be able to keep up with the changes. And the internet possibilities are going to grow exponentially. How do I manage that?

Tuesday I had lunch at Marcella’s house and forgot to take a photo for you. After lunch I spent a happy hour in her atelier, surrounded by Lara Design earrings, ear parties and little necklaces. I bought a new pair of earrings to match the dress I was wearing and you will see the earrings soon. (Being her friend, she gave me a big discount; so sweet.)

Some of you have inquired after dog Watson and here is a short video for you with the lad running along the shore. He doesn’t feel the cold and he runs and runs and runs. Never gets tired. You will see the little black dot in the distance approaching.

Wednesday both Ron and I got a flu shot at the doctor’s. I also got a pneumonia vaccine in my other arm; Ron already had his’ last year. It was so busy (with old people) at the doctor’s, you’d think they were giving away money for free. The doctors invite everybody on the same day, jab one after another and have it over with. They must be exhausted at the end of the day. The rest of the day I created this post, had a meeting with the bookkeeper and did the ironing.

Thursday was a busy day thanks to my forgetfulness. First a photo shoot with Kitty in the early morning. Then quickly hopped into the car to drive to Marjolein for a second photo shoot in The Hague. I made a date with Marjolein but forgot to put it in my agenda and happily made another photo shoot date with Kitty. Stupid me.
It was a grey day, light grey in the morning and dark grey in the afternoon. And it was supposed to be sunny that day (well, it was…a couple of hundred kilometres south). Grey skies never contribute to lovely photos, but perhaps I am mistaken. We’ll wait and see.

Friday started with a visit to the seamstress. One pair of trousers was ready and the other one was half ready but needed another fitting. I had planned it in such a way, I could go straight through to the hairdresser when they called me and postponed the appointment with 40 minutes. Not that big a deal, but me running loose in the centre of town with all these lovely shops, is dangerous. I exercised control over my urges this time and simply did some grocery shopping.

In the evening it was Sint Maarten (St. Martin’s Day) which meant we had to eat early because children came to the door with a lantern in their hand singing a particular song. After which you are supposed to give them a (wrapped) sweet. Ron had bought the sweets and thought he also included mini-Bounties. They weren’t mini’s and even though they hold two bars, you cannot cut the wrapping as that is not acceptable to the parents (the children couldn’t care less). So, I put three long Bounties in with the smaller sweets. You can guess what happened…they were the first bars to go. These kiddies have a keen eye.
Below: Ron took this photo, me holding the dish with sweets. (Link to original outfit post.) 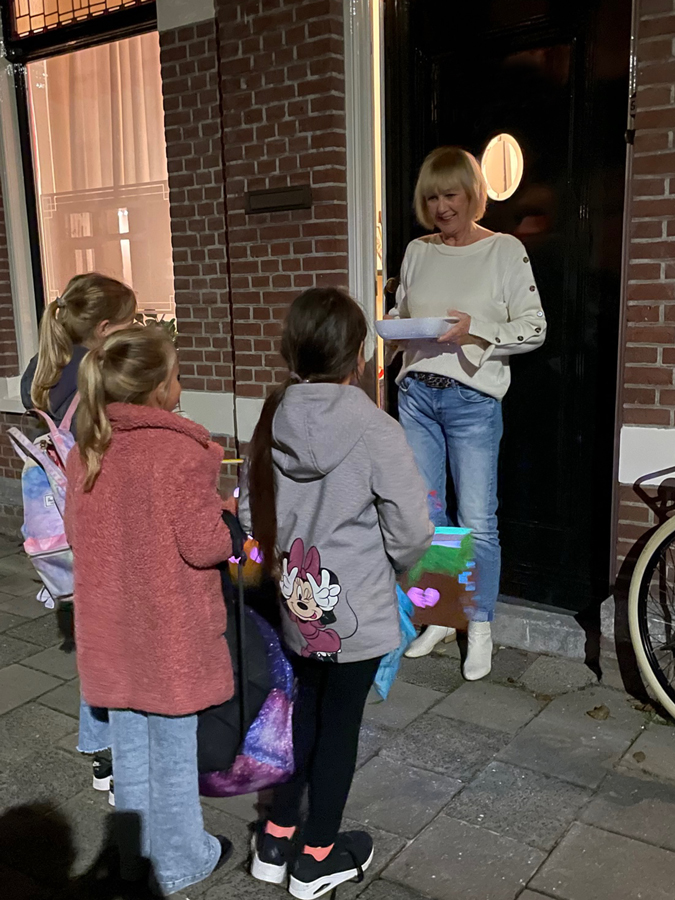 I was very curious to see whether subscribers would be put off by my change of content in the mail (see last week’s post). Around 3/4 of the subscribers opened my email, which is normal, and half of all subscribers clicked through to the blog. That’s what the statistics say.