My weekend with Nikki of Midlifechic 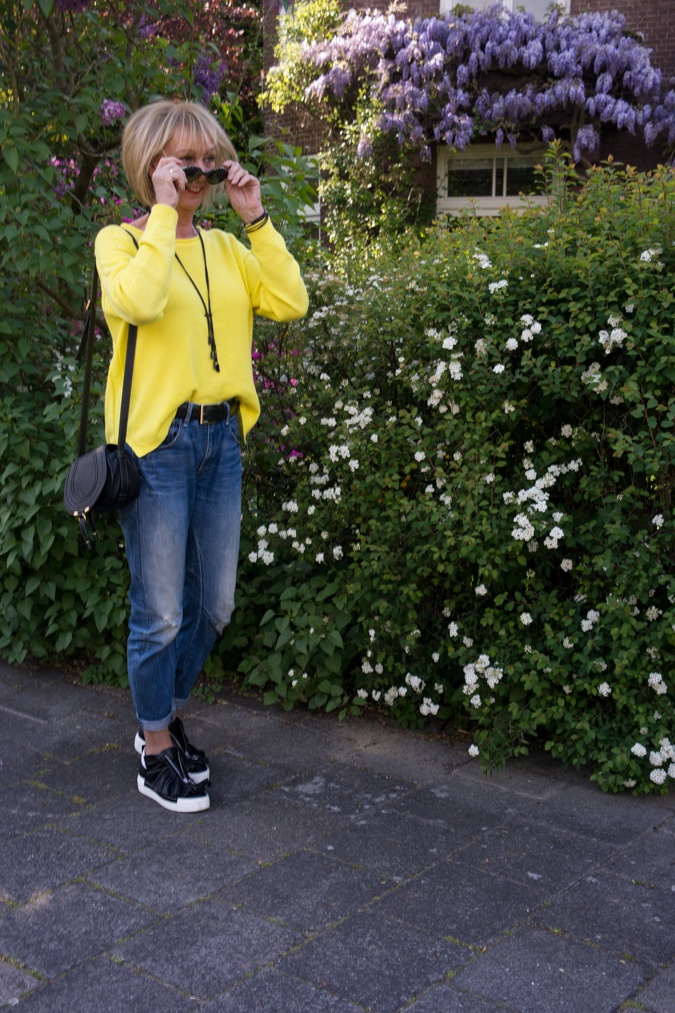 Last weekend’s photos won’t be up to standard as I forgot to take my camera with me when seeing Nikki of Midlifechic in Newcastle. Which was a good thing as the camera is heavy and I was carrying a lot (I never travel light). Besides, we were far too busy chatting, shopping, laughing and finding out what the other one was all about, to do a proper shoot. Some iPhone photos here and there and that was it. Not to leave you out in the outfit cold, I chartered Loes the Monday I returned for some photos of my lemon yellow spring jumper. This post will be a mix of both the outfit and the weekend.

Let’s start with the outfit and have that “over and done with” haha.

Below: I told you I would be buying 5 yellow jumpers before I would find the one to replace that borrowed lemon yellow spring jumper I wore with my long green skirt. And I nearly did; luckily I ended with three of them. The mustard one, the winter yellow one and this one below. The one below was the cheapest and exactly the colour/spring material I was looking for. Quest is over. 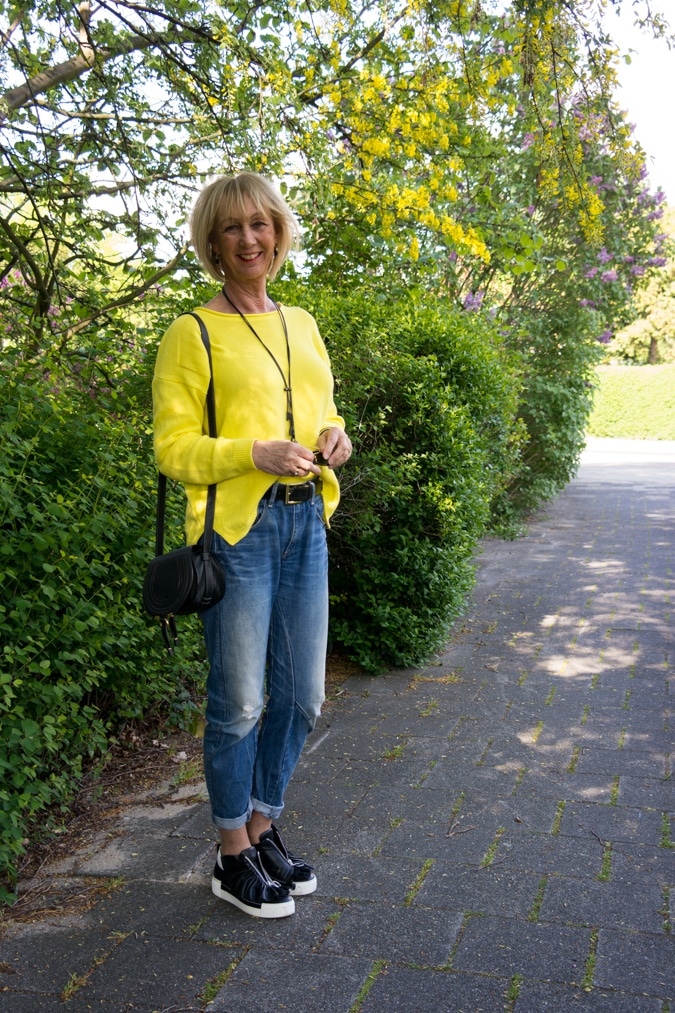 Below: It is not long at the back, but long enough. Combined it with black accessories, like my lovely crossbody bag and a pair of (new) black sneakers. 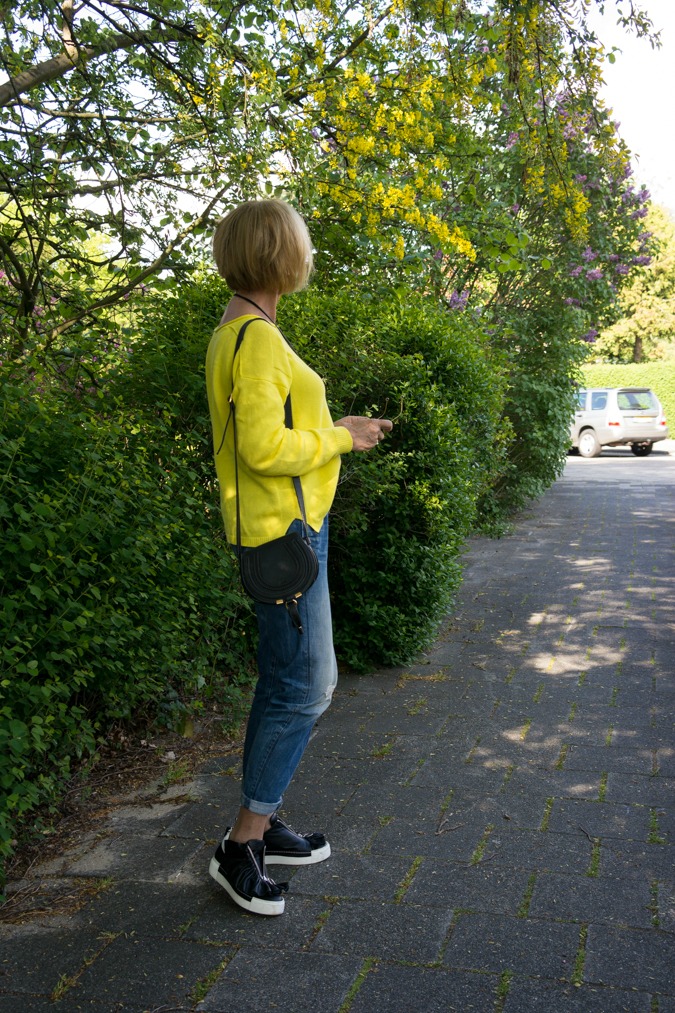 Below: Black bracelet and necklace, made of rubber and bought at the market wearing my lemon yellow trousers. 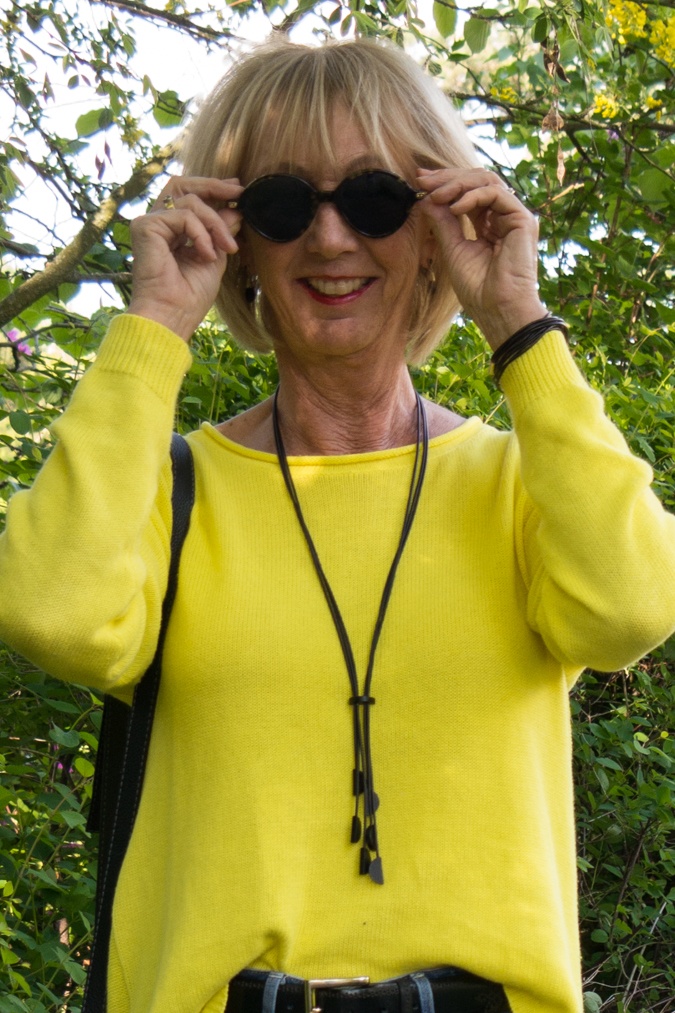 Below: The new sneakers by Vic Matié. You have seen them last year in white and didn’t they look good underneath that blue summer dress? I was so taken by their comfort, quirkiness and the fact they look good with dresses and skirts, that I couldn’t resist the black ones when this lovely shop LAB Women’s Clothing in Haarlem were selling them. 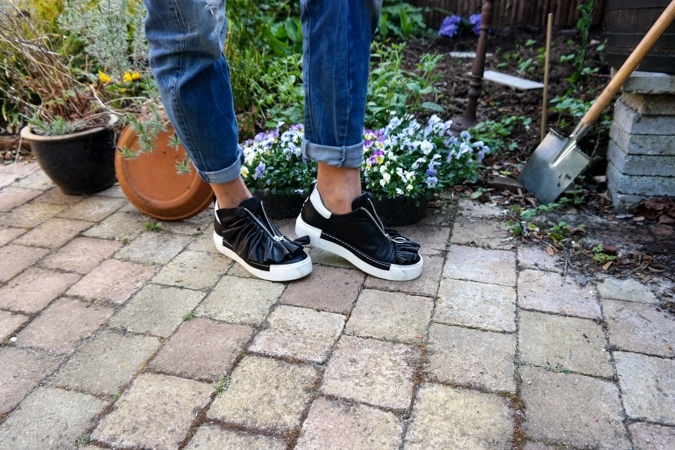 Below: Loes and I searched for a house with wisteria to do our quick shoot and found one. Didn’t think the people of this house would like it if I rang the doorbell to ask whether we could take pictures in their garden, so we stayed on the pavement. Hmm.. shoulders are rather broad and bum is tiny, but that’s the truth folks. Don’t want to hide it all the time. Last weekend Nikki (Midlifechic) and I met in Newcastle upon Tyne as this town was sort of “in the middle” between our homes. Never expected much of the industrial city Newcastle but that assumption was totally wrong. It is a lovely town with beautiful old buildings, a good shopping centre (more about that later) and great modern architecture as well.

Below: The pedestrian bridge over the river Tyne, called the Winking Eye by the public as it opens for ships to pass. On the right is Newcastle and on the left is Gateshead. 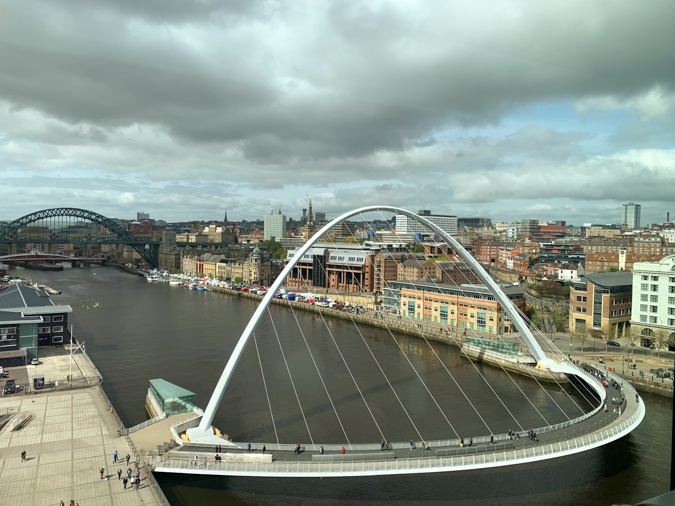 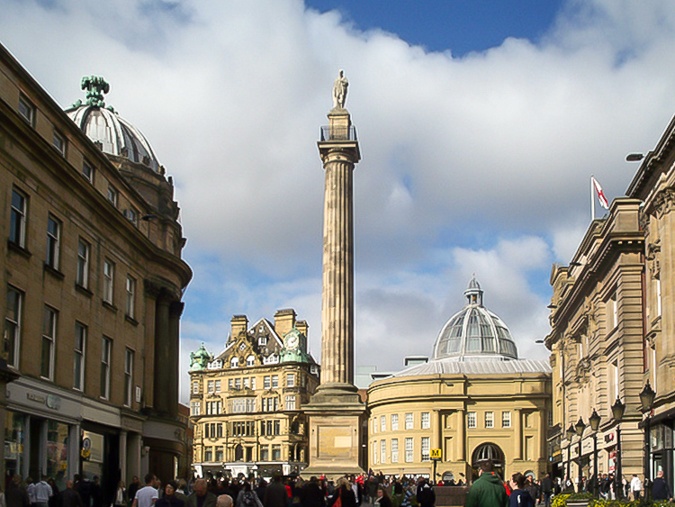 On Saturday morning we walked from the riverbank where our hotel was, up to the centre of town. Quite steep as I had found out earlier when walking to the hotel. Google Maps said it was a 9 minutes walk and as my suitcase had wheels I thought I should be able to do that. Until I arrived at steps going down and down and down. Unbelievable. For somebody with a bad knee and a heavy suitcase absolutely impossible. The people of Newcastle however, are apparently the friendliest people in England (a lady in the bus told me so). I can confirm this as a gentleman solved my pickle by carrying the suitcase down all those steps for me. I followed very slowly and carefully. He went way out of his way and guided me to the hotel as well. Such a nice man. The next day when I had to return to the busstop, I took a cab.

Below: Nikki and me in the shopping centre, right at the time it rained a bit, so we missed that. We only experienced some clouds and sunshine the whole weekend. As you can see I already “scored” in the shops, which is Nikki’s fault. Of course she will say that I was enabling her and not the other way around, but she was the one who wanted to go to the shopping centre. I just cannot resist nice clothes; no discipine in this area. As you can see, we both like colour. 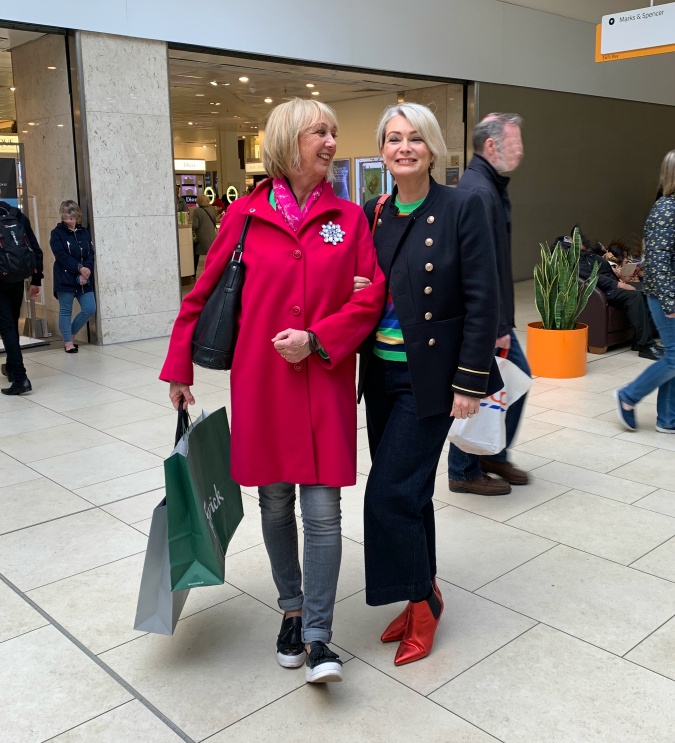 It was so lovely to meet Nikki again and  to have time to get to know one another better. It turned out we have quite opposite characters. There must be enough common ground as well as we really like each other. She is a very good writer and I read all her posts. Her blog is like a magazine to me. The things she wrote about our weekend together puts my writing to shame.

Below: Nikki had a session at Bobby Brown to create smokey eyes. She got a lot of compliments that weekend and not just because of the make-up. 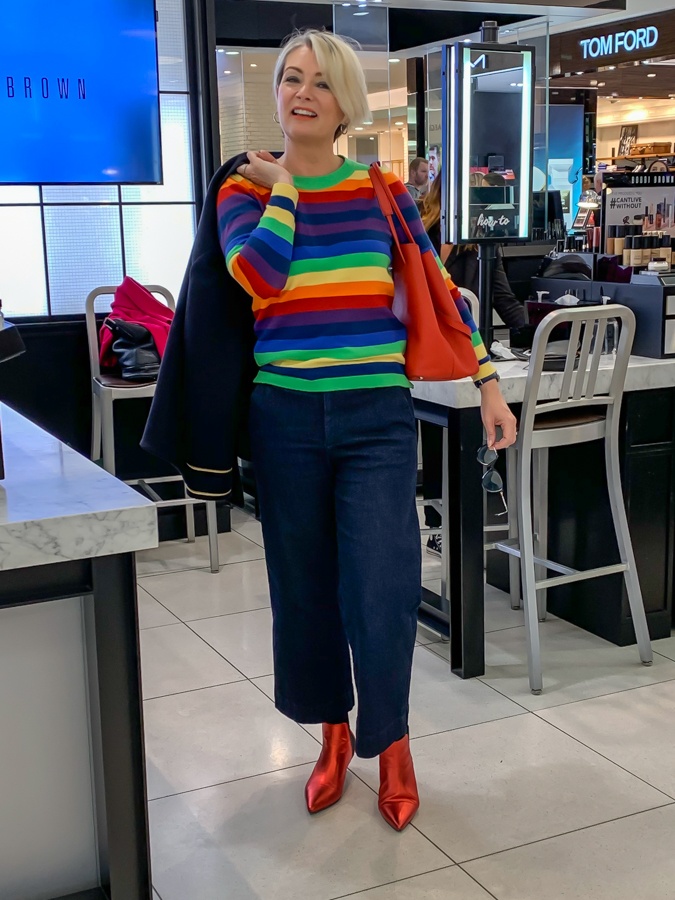 Below: I was going to show you the fantastic blue skirt I bought but decided against it. Just a little part of it as preview. This skirt deserves a post of its own. I danced in the aisle with the skirt so people probably thought I was mad. Never mind, they have been thinking that about me all my life. 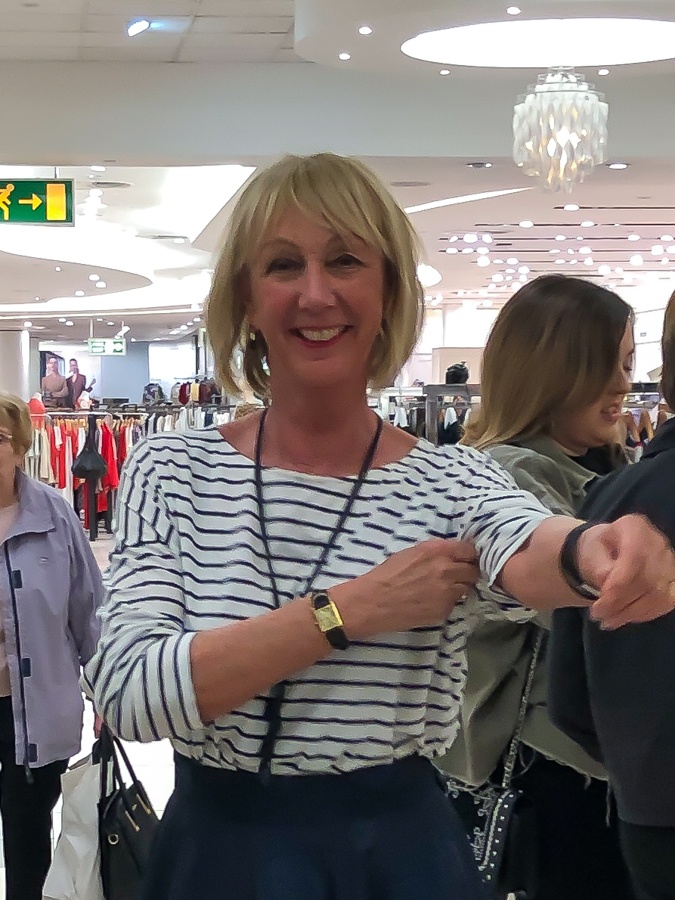 Below: Nikki tried on this beautiful dress, because I made her (I am an enabler). The waistline was a bit too high on this dress so it stayed in the shop. 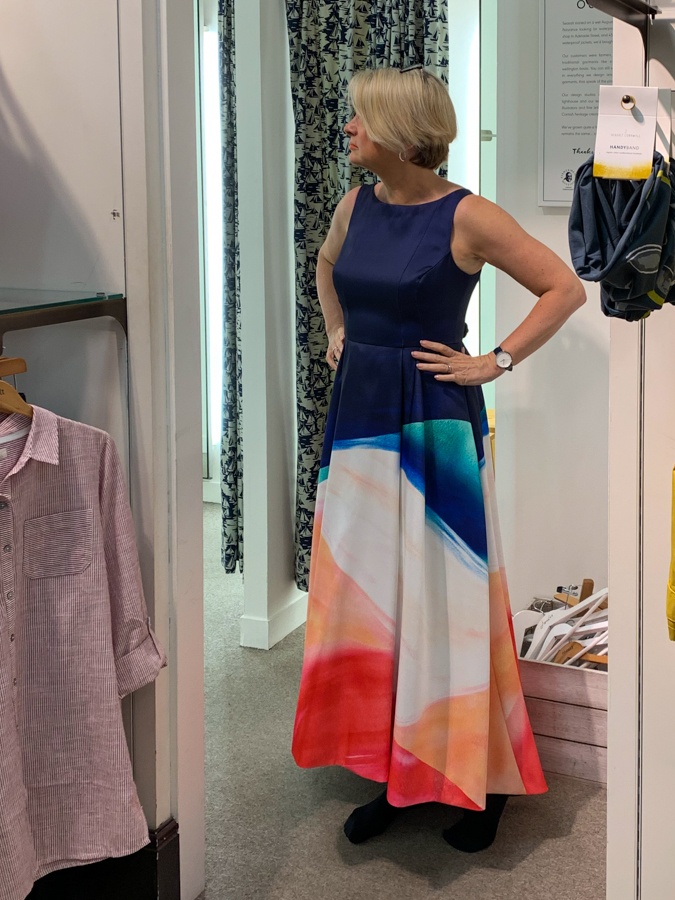 Below: OK one spoiler alert… these yellow pumps were too good to leave behind. They cost £ 45 and feel so comfortable with the cushioning. Marks and Spencer. What a shame they closed shops in The Netherlands in 2017. I will properly style them in a future post and I bet these babies will be my go-to pumps this summer. 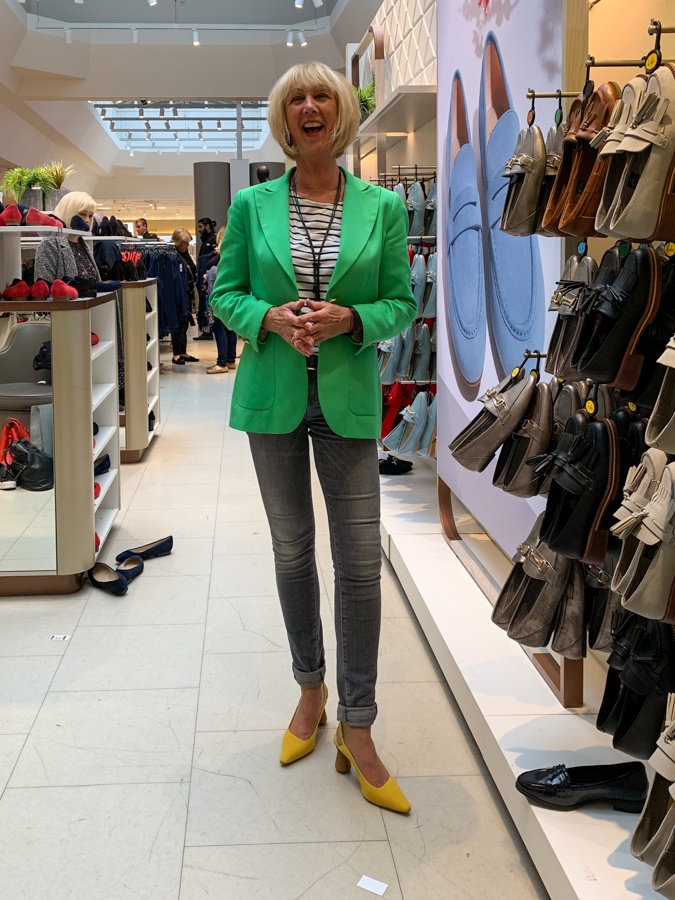 Below: Having dinner in a really nice place. No idea what the name of the place was. Nikki made the reservations and the Über took us there. I just followed. If you think “what are those trousers Greetje is wearing?” then click through to this post of December 2012 or this post of October 2015. If something is right, it will stay in my wardrobe quite a long time. 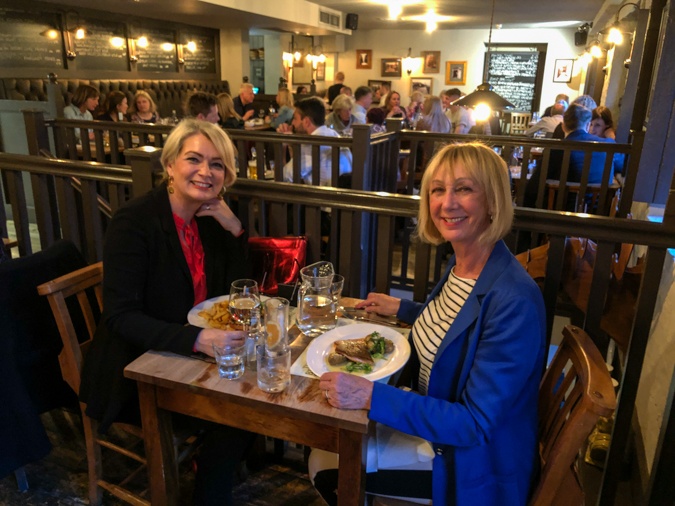 Below: Another beautiful bridge across the river Tyne. 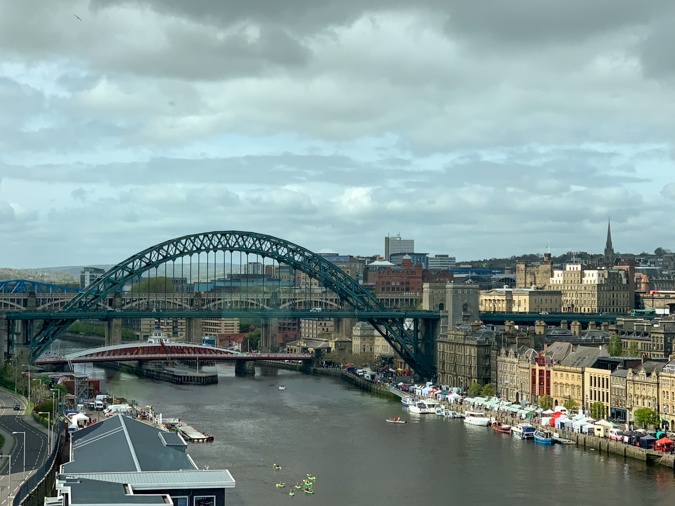 Below: The Sage in Gateshead, a music centre. If you click through on this link, you will see more spectacular photos of this magnificent building. Somehow it reminds me of the Opera House in Sydney.

Below: On Wednesday I had dinner in Haarlem with Sara who was over from the US. We could squeeze in a couple of hours in her busy schedule. Sara and I met in the late seventies through our friend Pat. 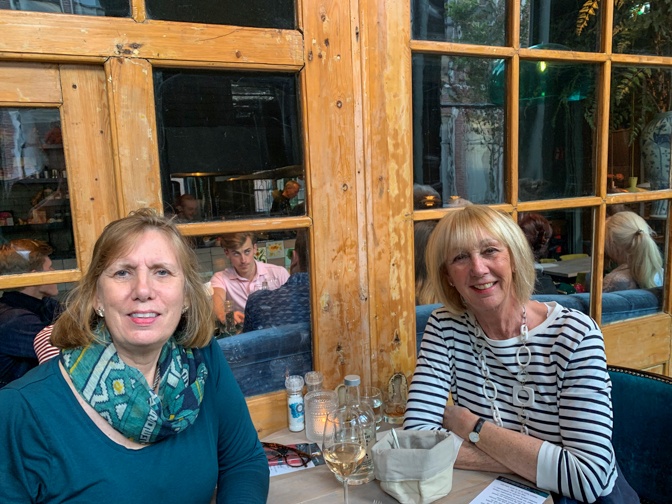 Below: Restaurant De Ripper is a restaurant (and hotel, I believe) near the station of Haarlem, rated 9.3 (out of 10). They have the same concept as Jaimie Oliver’s restaurants: giving young people who have had less opportunities in life  an education in the catering industry. The food and service were indeed very good and the decoration of the building was outstanding. 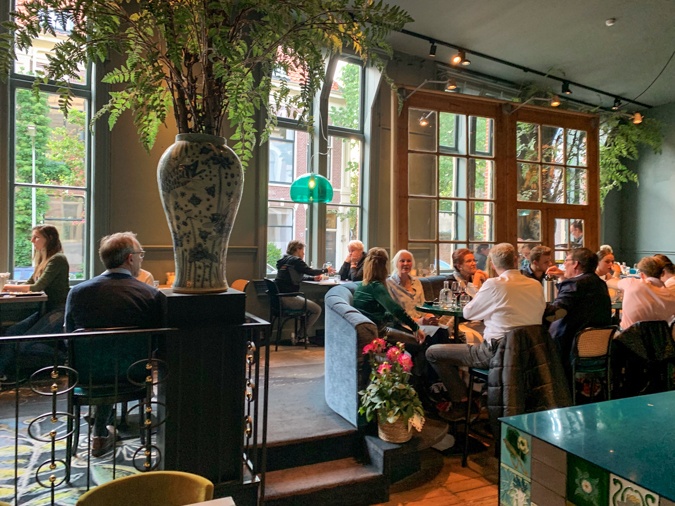 Rest of the week was just work, eat, sleep.

← White flared trousers with a bright blue jacket How to wear a sleeveless dress over 40 (or 50 or 60, whatever) →

← White flared trousers with a bright blue jacket How to wear a sleeveless dress over 40 (or 50 or 60, whatever) →