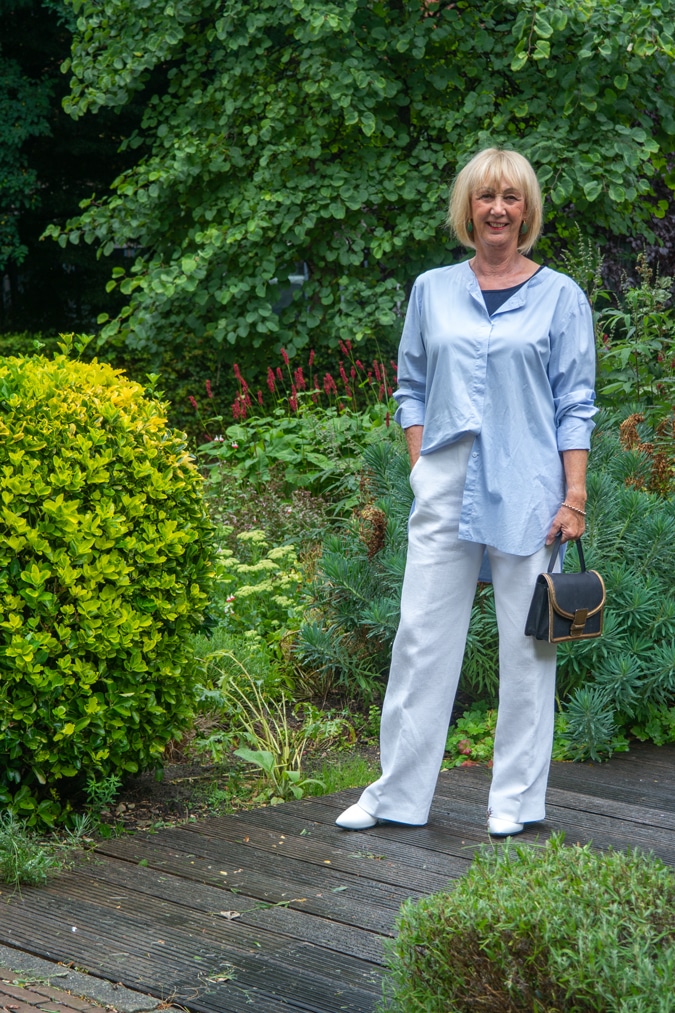 Hurray, I am creating outfits with clothes I already possess. From the wide white trousers to the blue shirt and from the white boots to the blue and gold bag…they are all treasures in my wardrobe.

The wide white trousers were the ones I could never style. After I found the perfect boots to go with them, I created at least 5 good outfits by changing the top. You have recently seen the trousers with a long green coat in this post. Some outfits I like better than others and you always want to wear the best, don’t you?

Further on in this post you will see the trousers with just the navy blue top.

Ron was my photographer and the Watertorenplein (water tower square) served as a background. Amsterdam used to get its water from this pumping station. 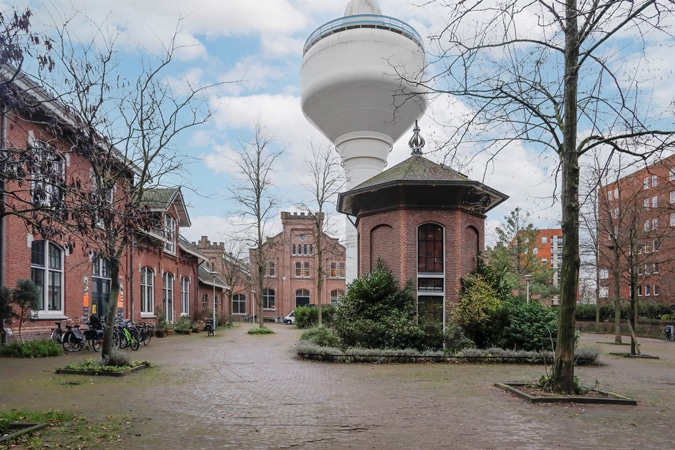 Below: I had tucked in one side of my shirt a bit too high as I discovered later on.
The details: long blue shirt by Bellamy Gallery, wide white trousers by Essentiel Antwerp (two years ago), white boots by Unisa (a gift from my friend Jilske two years ago), the irresistible blue and golden bag was a sales score last year and is by Dries van Noten. 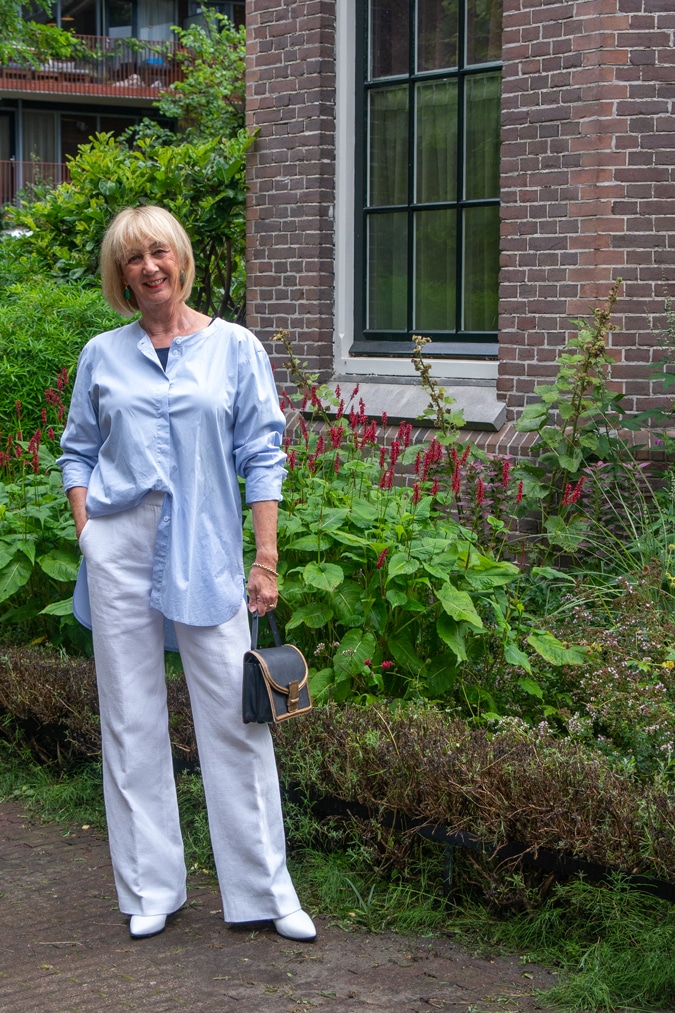 Below: For variation I added my infamous ‘Paris necklace’ (see the story of that unjustified purchase in this post). The shirt is tucked in properly now. 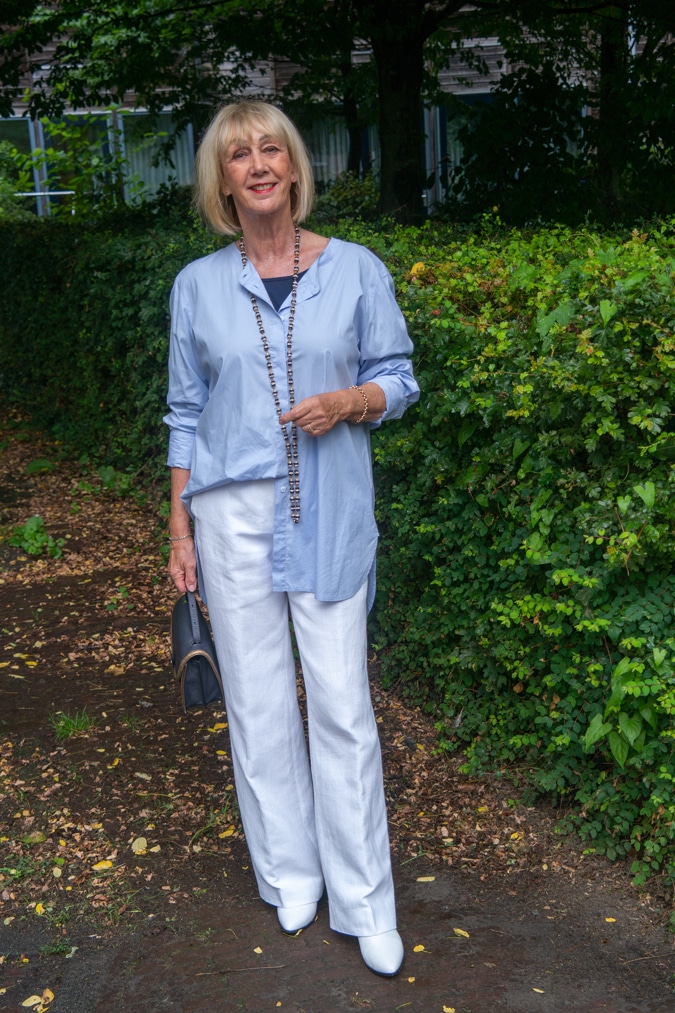 Below: These snakeskin printed earrings are a present from my friend Marianne quite a few years ago. They brighten up my face. 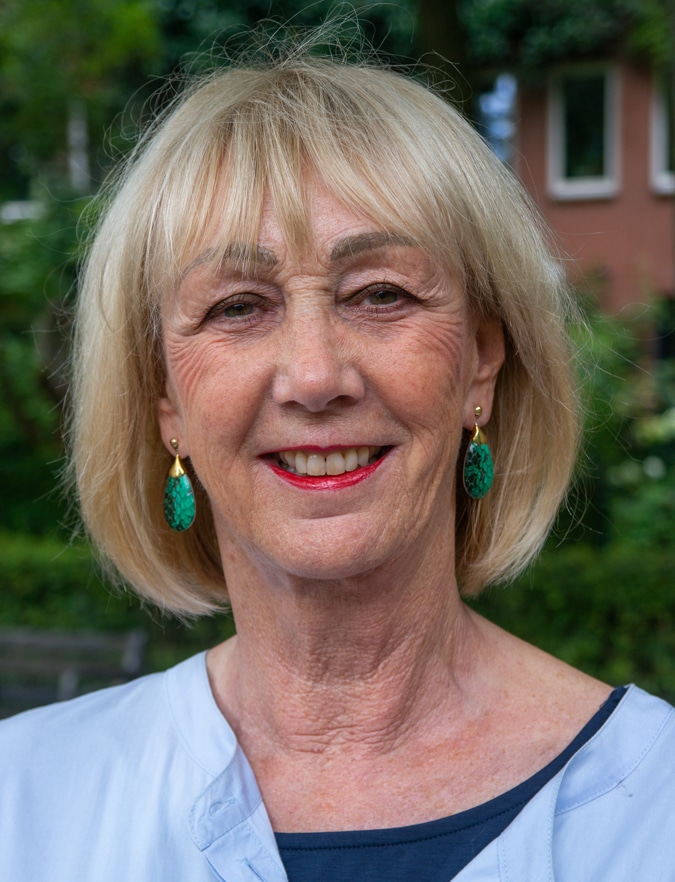 Below: Behind me were new buildings with a lot (and I mean A LOT) of green against the facade. That doesn’t just grow there. The architect must have intended it to be sort of hanging gardens. I love it. 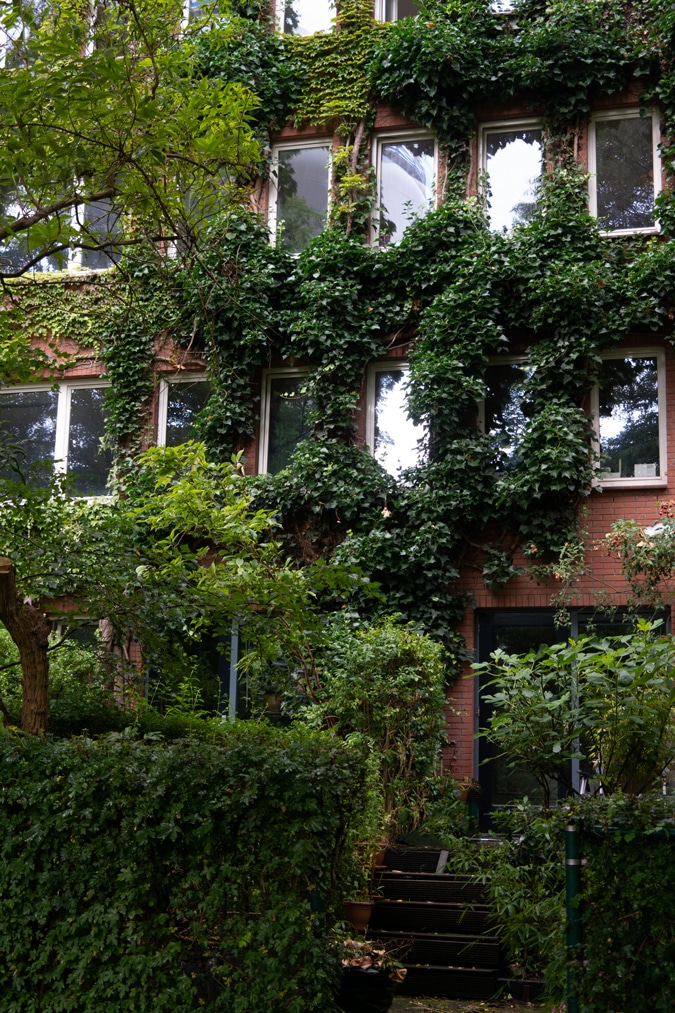 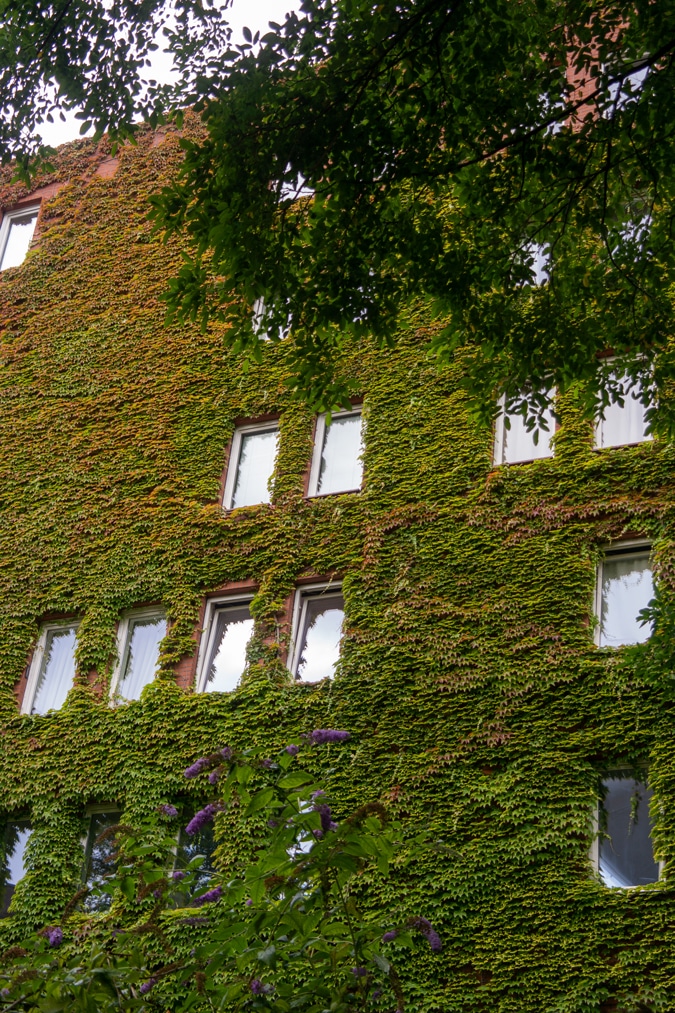 Below: We headed inside Café Restaurant Amsterdam, which is situated in the former engine room of the pumping station, built in 1897. You can read more about the history here. 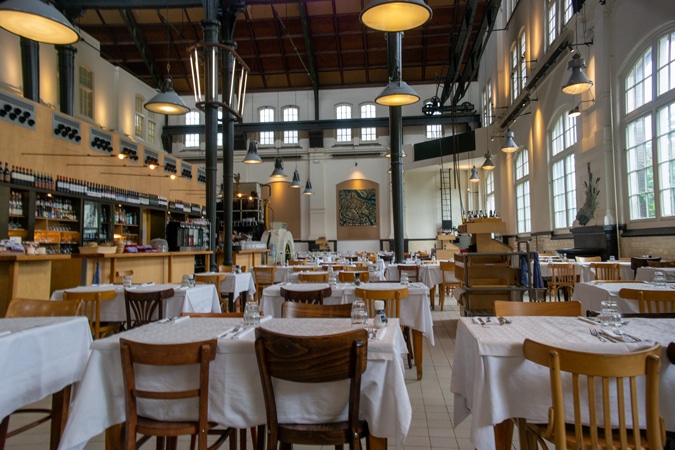 Below: It is a very impressive building. 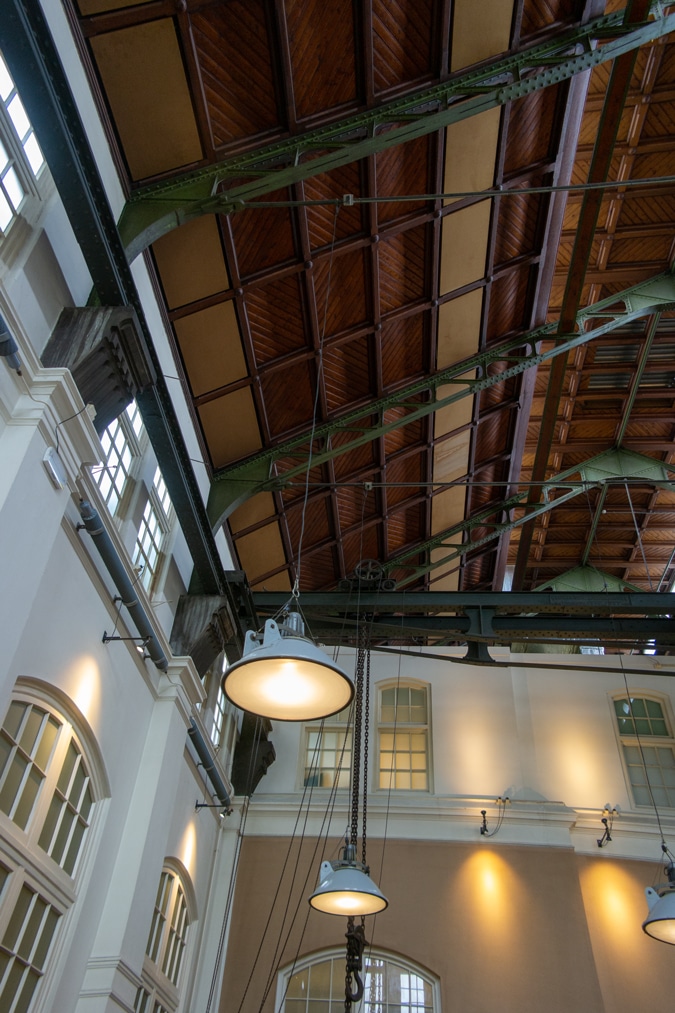 Below: And they serve excellent cappuccino. This is the WANTED photo you saw as a preview last week. 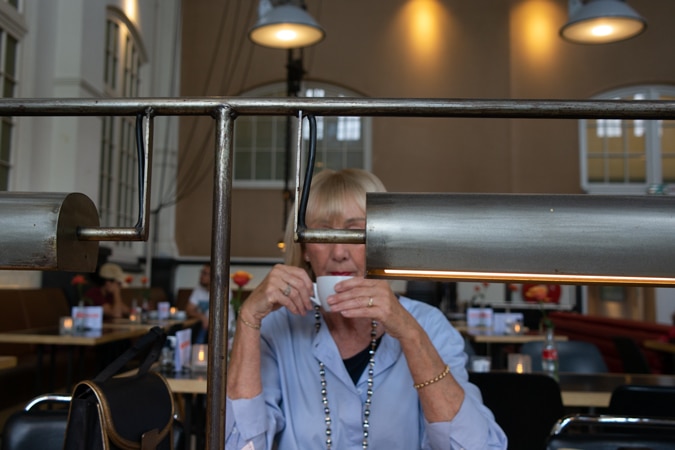 Below: Better. See my contented face because of the cappuccino? The shirt is off in this photo and the necklace replaced by a pearl one. 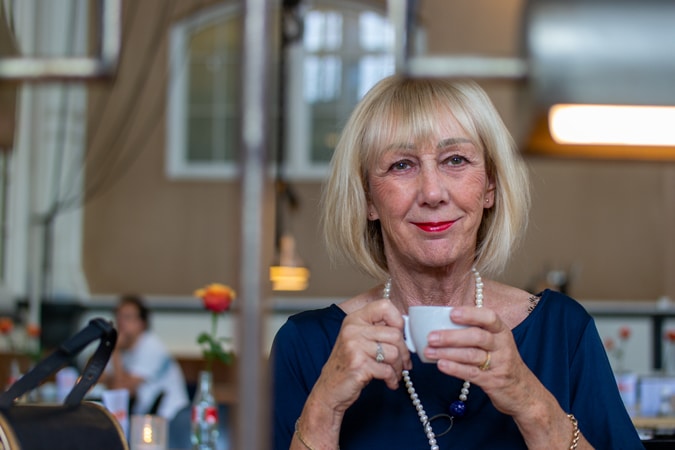 Below: Ron secretly took a close-up of the boots. 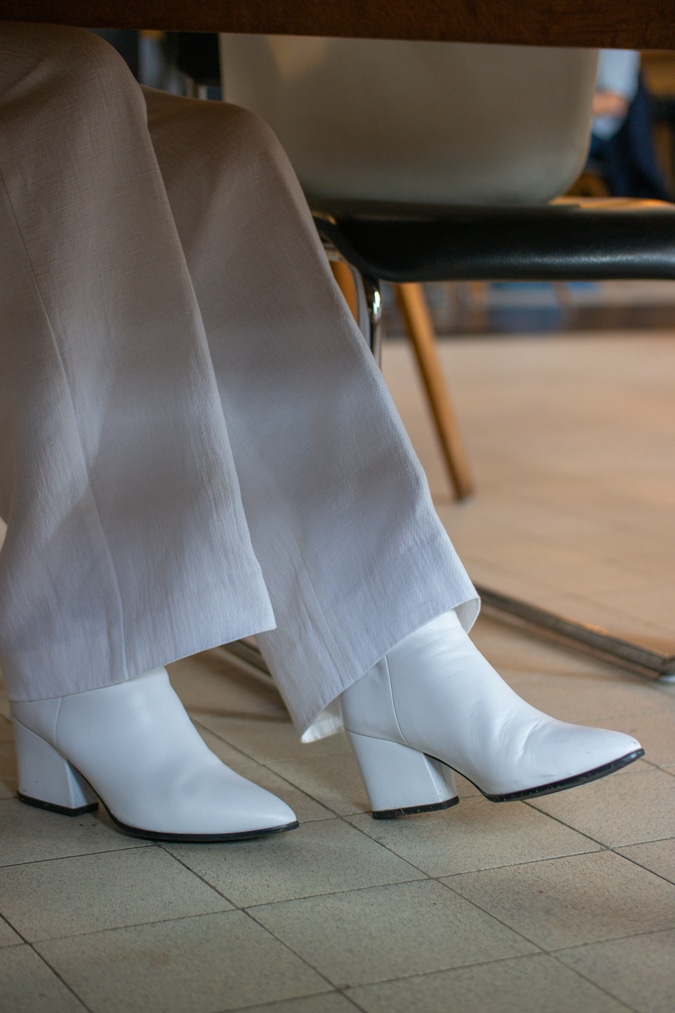 Below: One of the big engines in the middle of the restaurant. This top is a lucky find at an outlet. I only grabbed it off the rack to have something on while trying a denim jacket. The pearl necklace with beads of lapis lazuli is a find at an artisan market in Paris years ago. 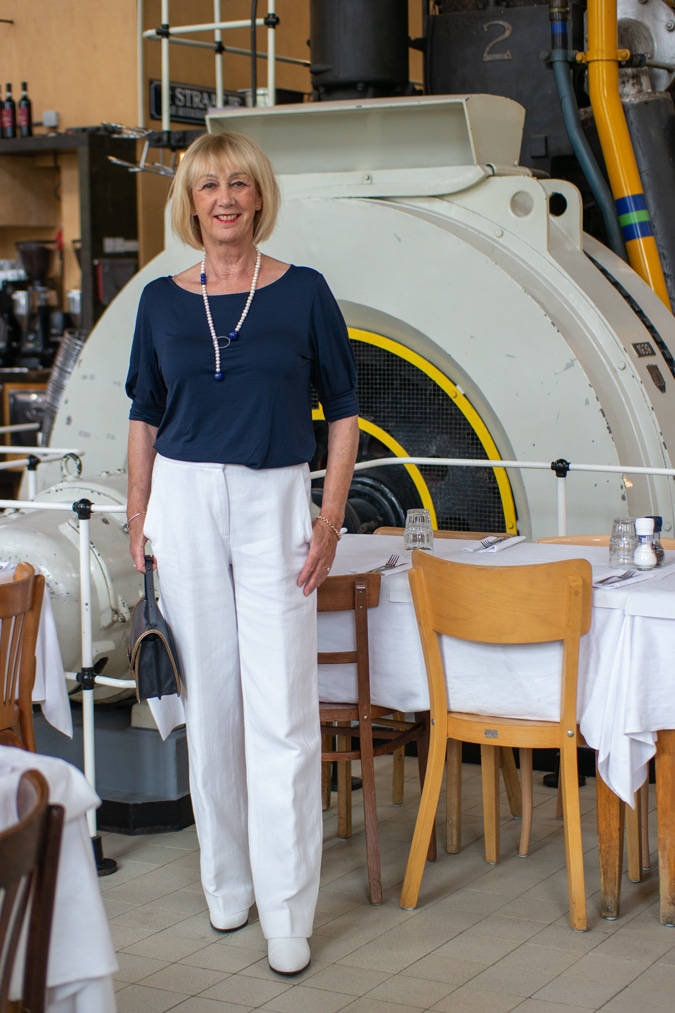 Below: Behind me the side of the engine and a closer look at the sleeves of the top. 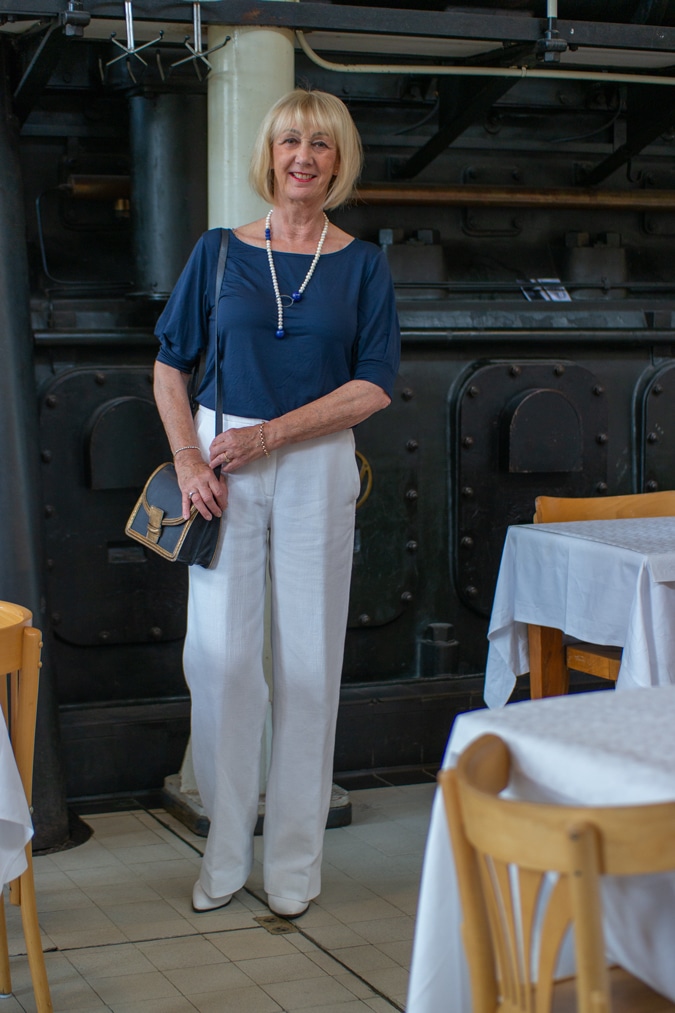 Below: The engine without me. 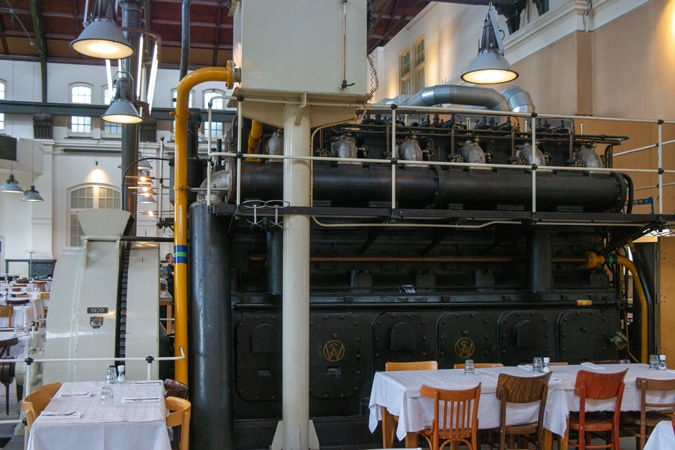 Below: Then there was this fountain (?). Ron stated you couldn’t see it with me in front of it. Sorry girls, for photobombing all the interesting sights. 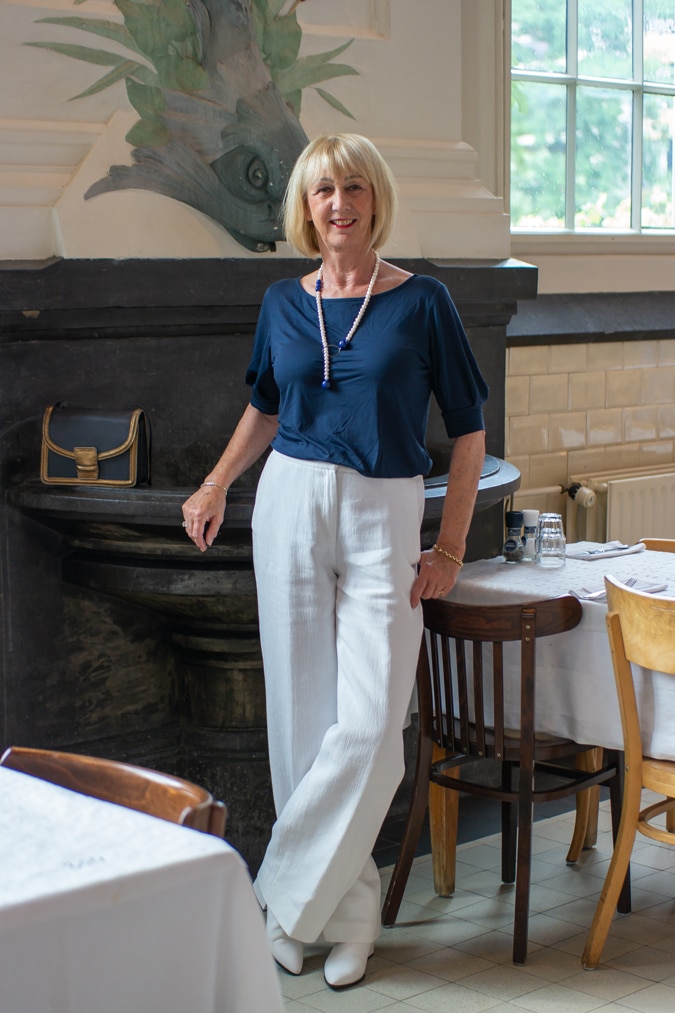 Below: Just kidding. Of course I took a photo of the fountain itself. It is 3D. I suppose it was there because it has something to do with water? No idea. 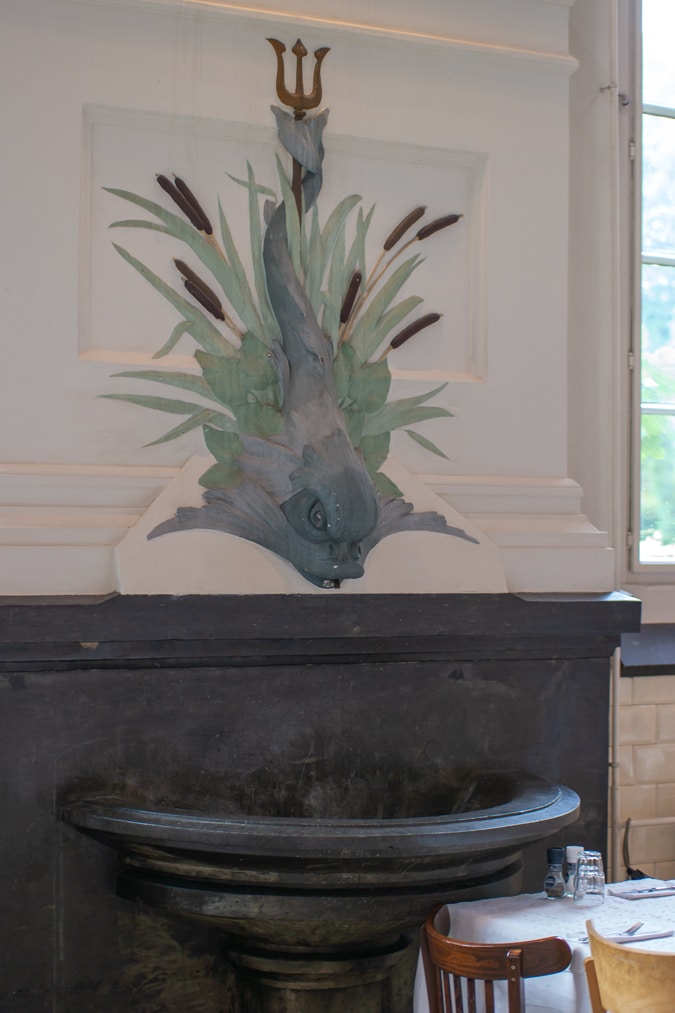 Below: As we had a second cappuccino, I spotted this beautiful woman and asked whether she would mind being featured on my blog. She was very kind, laughed and said it was OK. 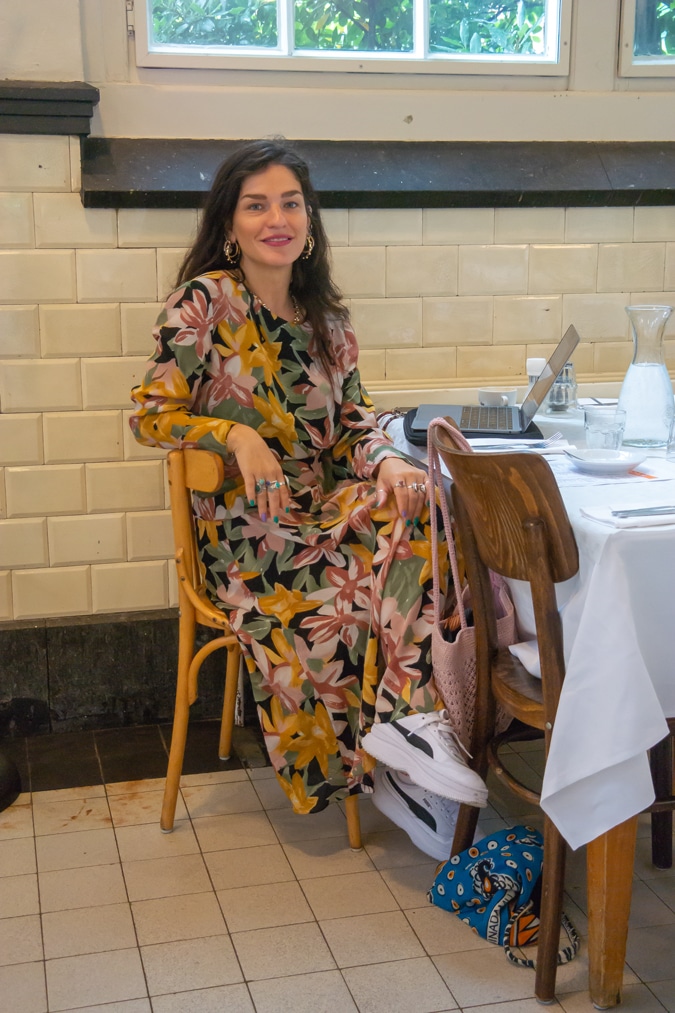 A lot of things happened but I have few photos of it.

Saturday was a Shopping Saturday without shopping.
Sabine, Anke and I (the three of us form the Shopping Saturday ‘group’) saw each other again after a long time and decided to use all our time together to chat. Our husbands were pleased we didn’t come home with lots of new stuff haha. Just joking. We are all women with our own income and we pay for our clothes and shoes ourselves. Never an argument about buying too much. Even so, I am often feeling very ashamed about my incessant shopping and smuggle bags into the house. Not that Ron would make a nasty remark, it is just shame about my own behaviour. Now I know for a fact that a lot of women smuggle bags into the house, which stupidly, makes me feel united in sisterhood.

Anyway, we had a great afternoon and took lots of photos which you will see next week.

Sunday we visited my bonus daughter and her husband. We meant a short visit just for coffee, but we stayed for dinner. Nicky had made a delicious soup. Lovely day. Of course we talked a lot about the new house and about decorating it.
We discussed about going to Paris at the end of September. That plan fell through a couple of months ago when we saw the contamination rate rise in France. Now the code for France was yellow and we decided we would go. Nicky had hung on to the hotel reservations so all we needed was train tickets and a nice home for dog Watson for four days. (The plan was aborted again on Thursday when we heard on the news that the Pfizer vaccine’s protection rate was down to 75% with the Delta mutation. These are very uncertain days.)

On Monday I went to see mum. Nothing special, we chatted and I brought dinners Ron had cooked. She only has to take them out of the freezer and put them into the microwave.

Also on Monday dog Watson was trimmed; his hair was finally ready for it. He isn’t as Muppet-looking-cute anymore; instead he looks very athletic, which he is, see below. His tail is down as I tried to get him into a position to photograph so he suspected something unpleasant was going to happen. As a matter of fact, he wasn’t that wrong. Both his ears are infected. He gets medicine in his ears every day for a week. As soon as he sees the blue medicine boxes on the table, he shoots back inside. We have to do it outside as he shakes his head fiercely afterwards and half the medicine is flying around (we fear). The vet asked Ron whether Watson swims a lot. Ron answered: “Swims a lot??? You bet ya, I would have been better off buying a goldfish.” haha. 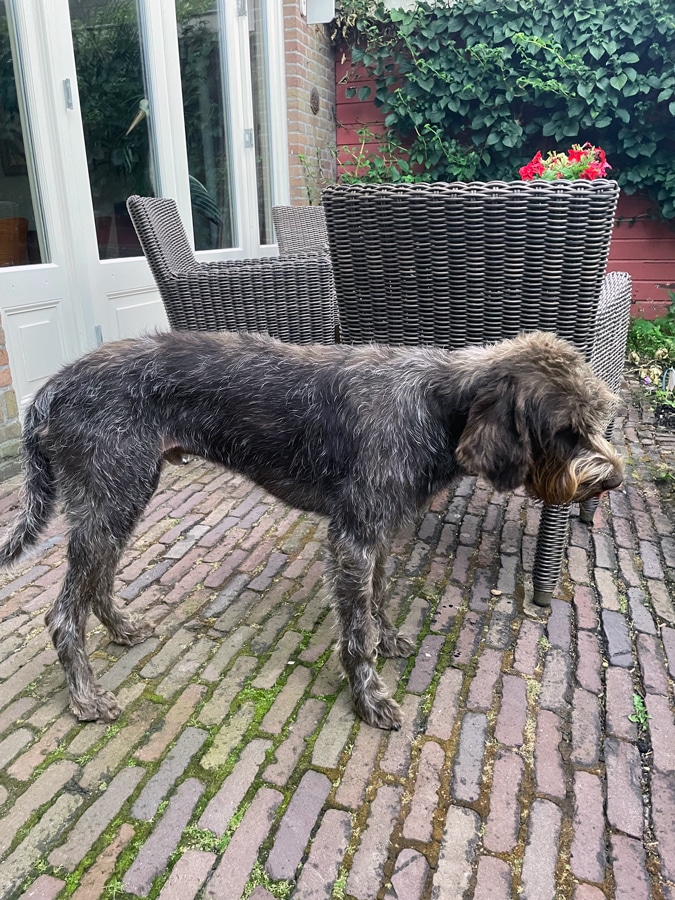 Tuesday nothing happened and it rained. I was going to meet Marjolein but we both didn’t want to spend a day in the rain, so we rescheduled. Instead I got to know my Photoshop Editor programme a bit better, applying all the lessons Kitty taught me. I still need guidance, but Rome wasn’t built in a day either. At least I can edit my photos for the blog as I used to do in Lightroom. The biggest disappointment is deleting unwanted objects from a photo. I never realized that you do not just remove the object. You have to replace it with something else, some pixels taken surrounding the object. This is sort of cloning to me and I just wanted undesirable objects in a photo, like a dustbin, to magically disappear. Not that simple it seems.

Wednesday I visited the hairdresser. As the salon is across the road from kpa.haarlem I popped in and had a sort of strategy conversation with Karlijn. At the end of the afternoon Kitty returned a dish (I gave her my left-over dessert last week) and she tried on some of my clothes that were on the OUT pile. They all fitted her and she liked them. Win win situation. As we were chatting, I found out that my missing coat was left in her house. I was about to ring a few friends.

Thursday was another busy day. Collecting boots from the cobbler and returning socks to Marianne. I had repaired holes in the heels for her. Yes, I know how to do that; you never expected that from me, did you? I stayed only a few minutes before heading to the dental hygienist and after that the dentist. Everything was fine and my teeth are nice and clean again. At noon I brought my lovely multicoloured shirt to the seamstress and she will repair the rips. Rushed off home to eat and be ready for Marcella of laradesign.nl. We created another Instagram reel and she helped me with something in Photoshop Elements.

Below: Marcella in a new jumper and new trousers, looking very good. 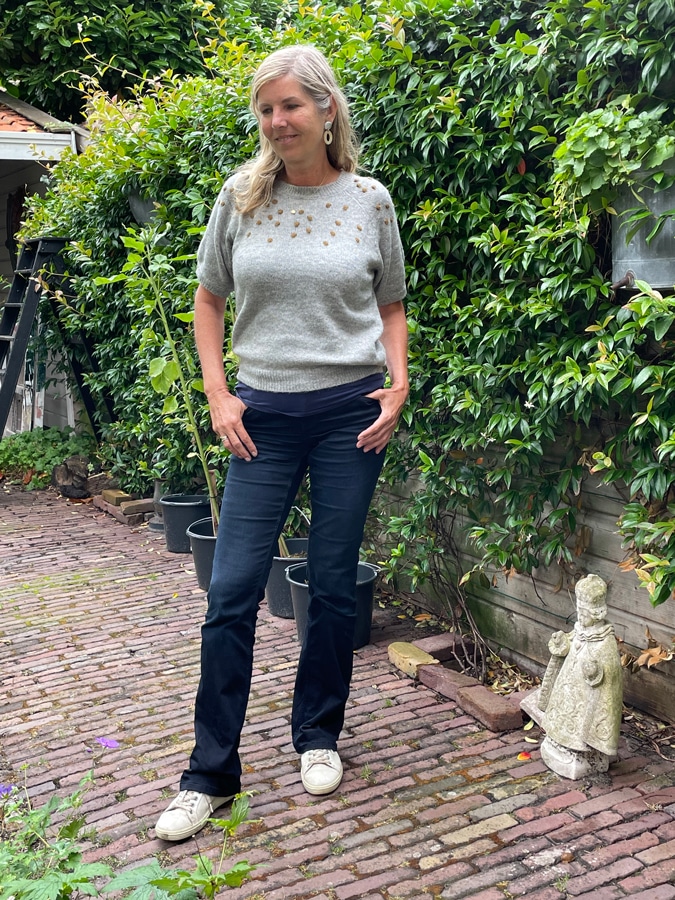 Below: Close-up of her earrings. 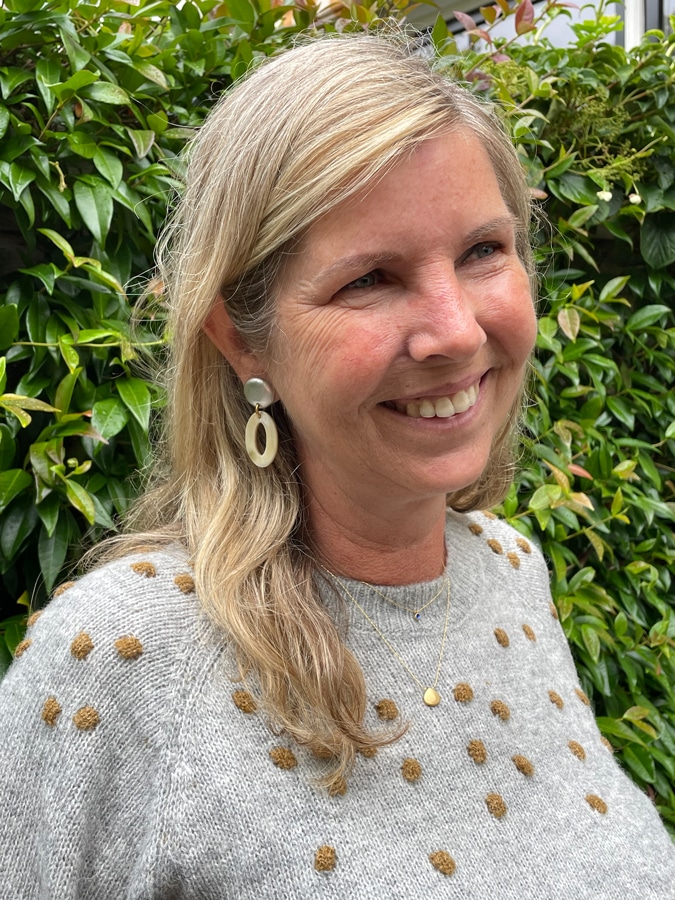 Below: I wore my eyelet kind of shirt. Easy outfit but the shirt gives the jeans outfit a bit extra (I think). Link to original post with cream trousers. 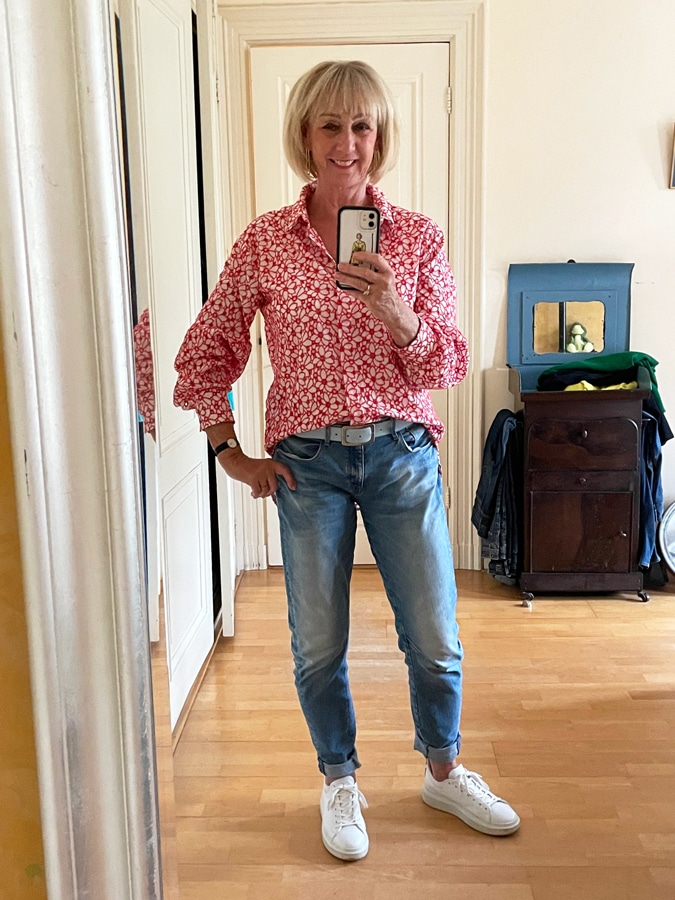 Below: As Watson is featured a lot on this blog, I thought it was time to show you my cat Sophie (named after Sophie Tucker). She looks lovely but she is not always very pleasant to me. Now that I am at home a lot more, she is warming up to me. 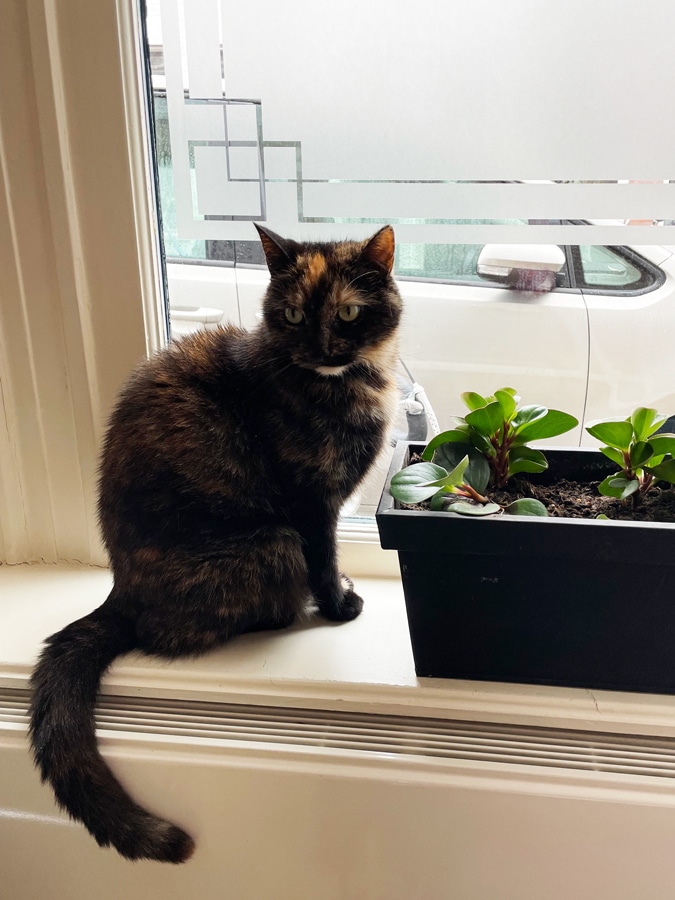 Friday the pedicure ‘did’ my feet and gave me bright red toenails for the last time this year as my next visit will be at the end of September. I don’t expect to walk bare toed anymore then. In winter I am lazy and never paint my toenails.

In the afternoon I had a very cosy meeting with my former colleague Erna. It was finally nice weather again so we could sit on a terrace. We chatted the afternoon away and of course I forgot to take a photo.
Anyway, this is what I was wearing (link to original post). 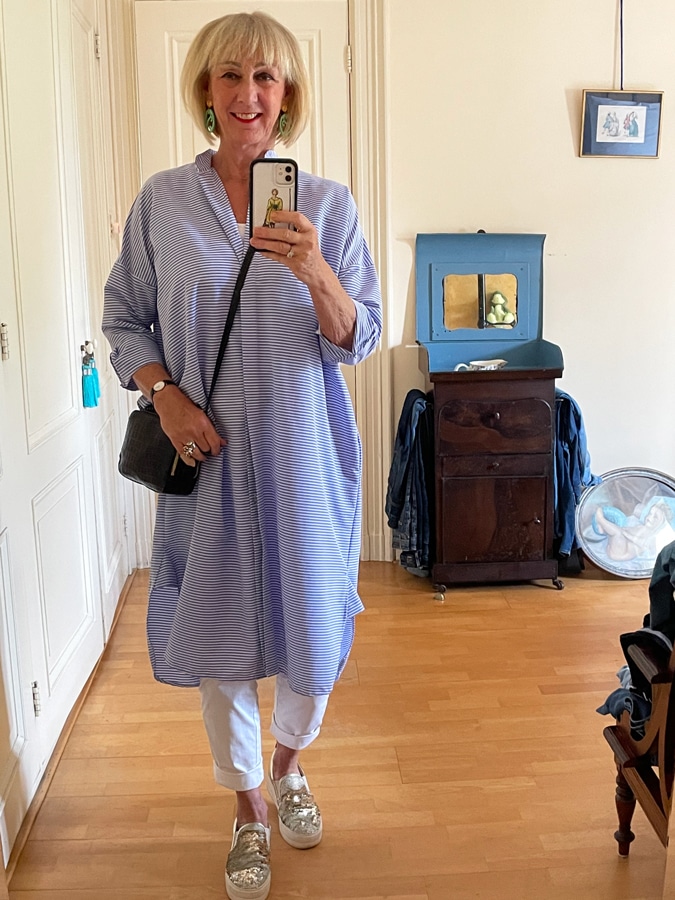 I had to rush home as we invited friends Georg and Marla to dine with us. Ron fried sole and it was delicious. He also made a liquid crème brûlée which was utterly delicious.

Let’s see what next week will bring.