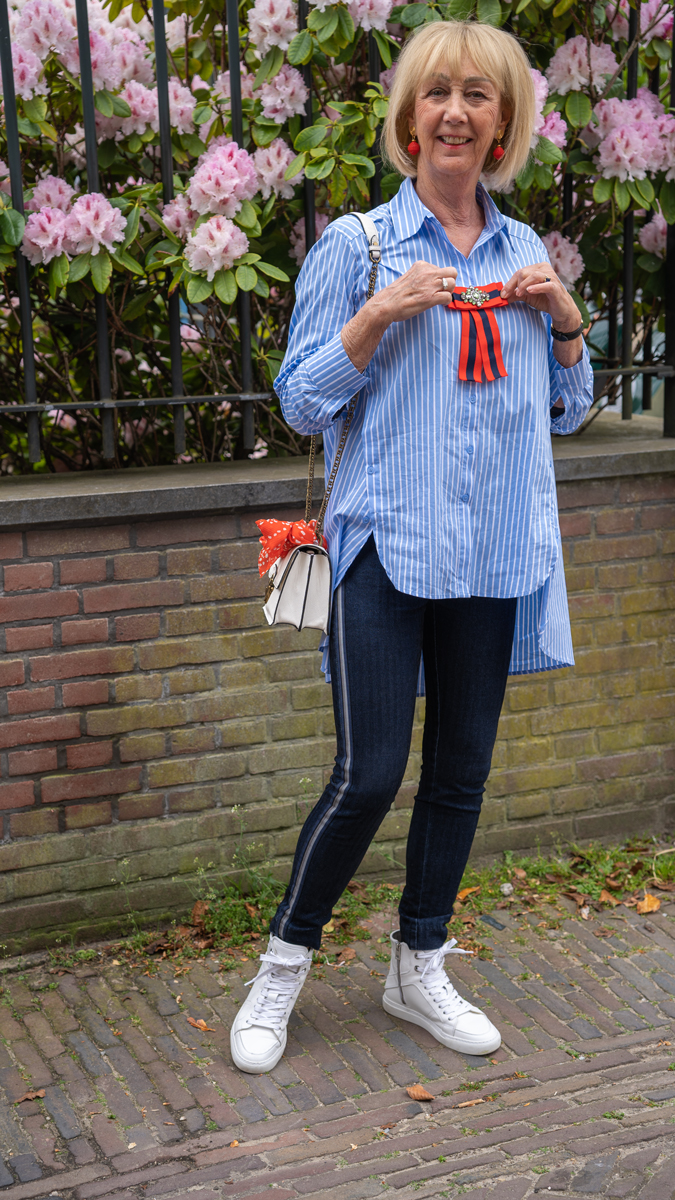 The plan was to go to Amsterdam and do a photo shoot on King’s Day while walking past all the shenanigans that were going on there. Unfortunately it was cold and cloudy and King’s Day is just no fun when the sun doesn’t shine. So we decided to stay in Haarlem.
Of course we missed really good places to show you as we always choose to go left when we should go right and vice versa. We got some nice atmosphere photos anyway. 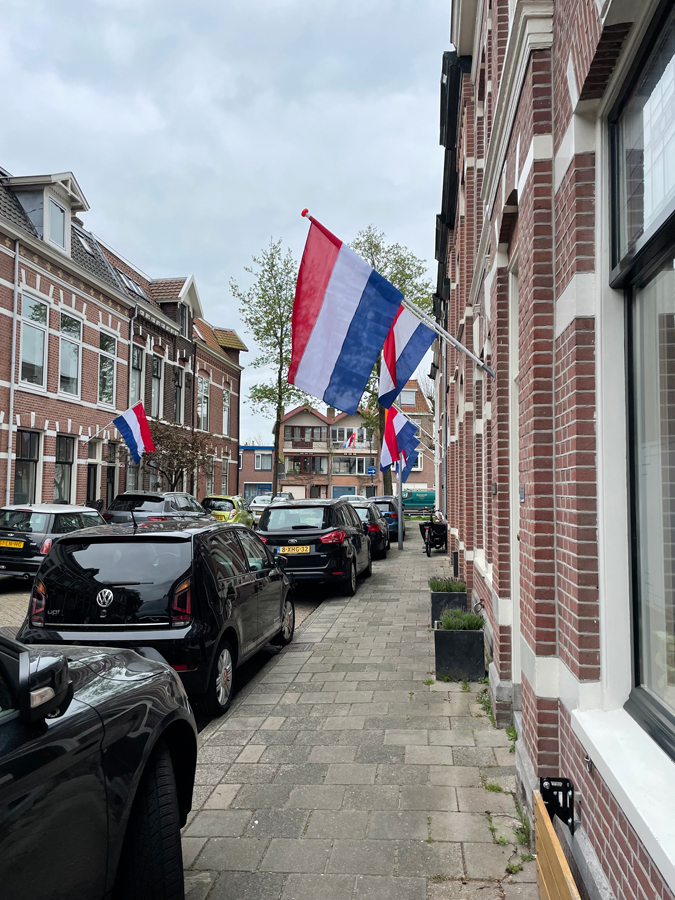 Below: My outfit for King’s Day. Red, white and blue with a touch of orange, all the national colours. The shirt is one of the purchases from the shop Addicted in Paris a couple of weeks ago. The earrings are made from cardboard but Marcella tweaked them for me (different button on my ear, different chain to hold the pendant). The brooch is from Essentiel Antwerp as is the little bag. 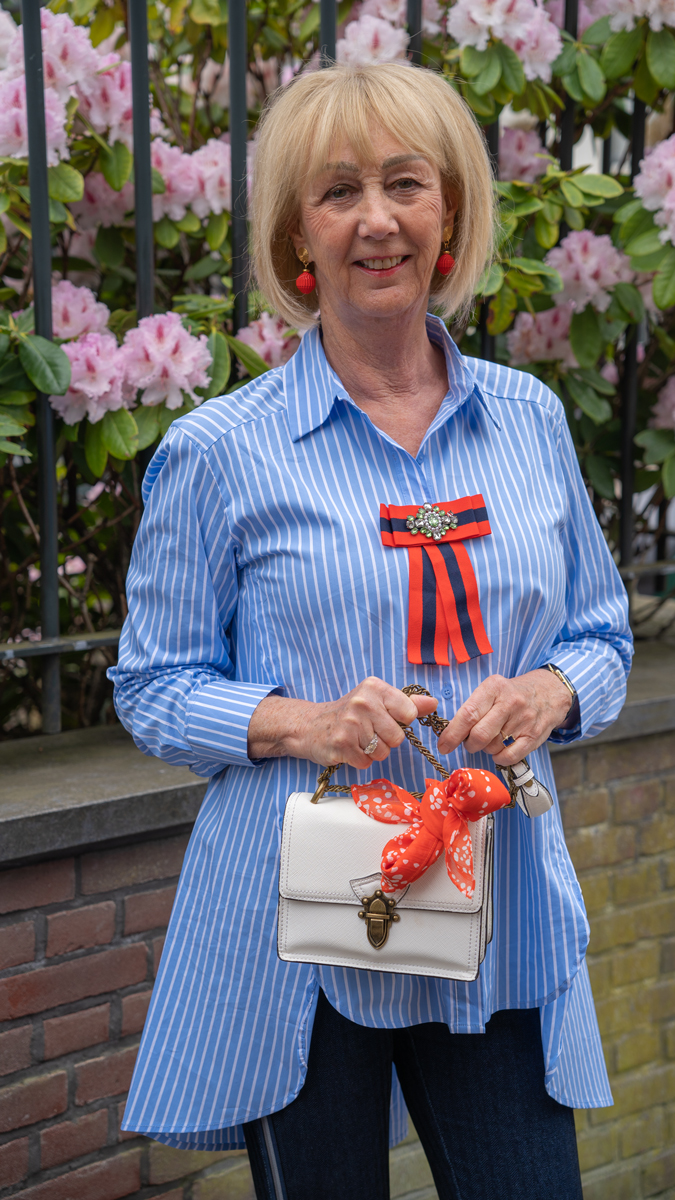 Below: As we entered the park where a lot of festivities were held, we ran into these women having fun, drinking somthing orange, which probably tasted horrible. 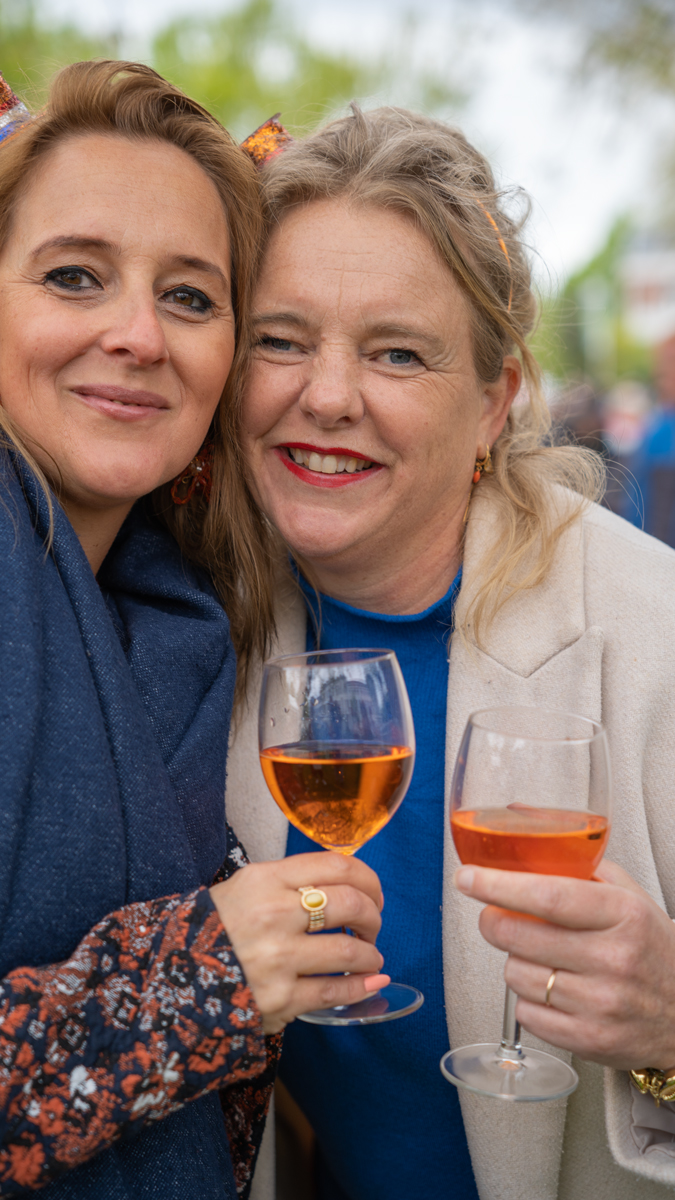 Below: They had a little girl with them who was selling slices of cake with whipped cream for 50 cents. We each had one. There were cupcakes too (€1), but we preferred the slice which was delicious. 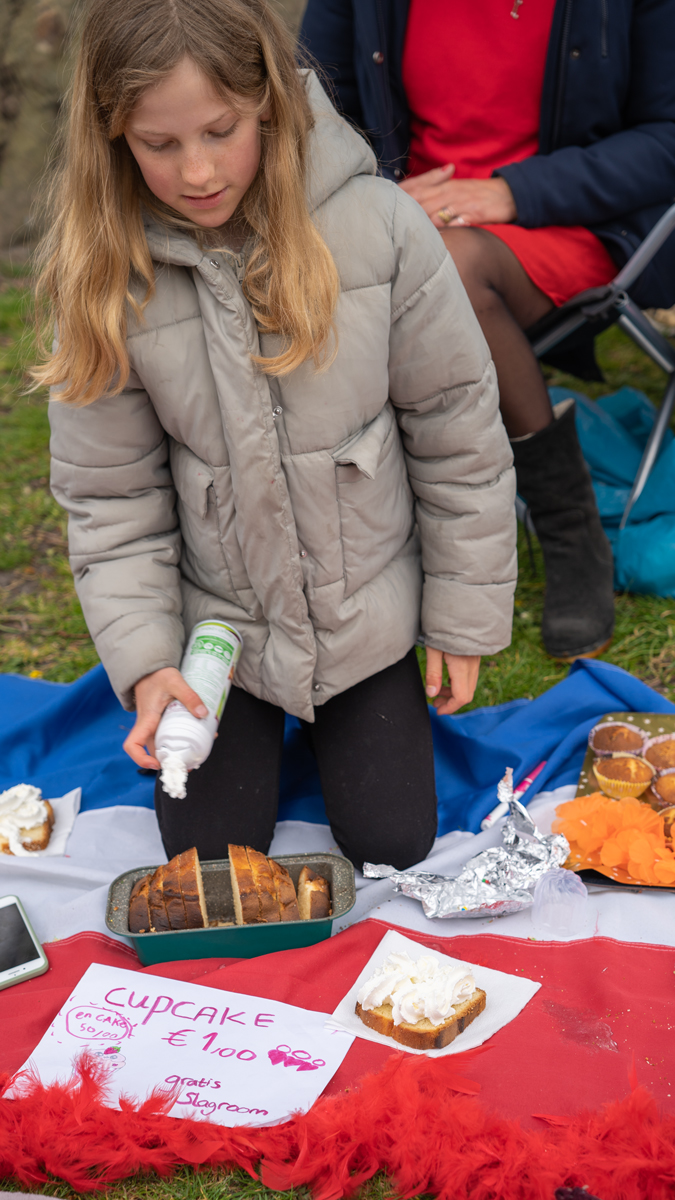 We were off to a good start. Full of calories but one cannot be bothered with calories on a day like this.

Below: Especially the little children, always so endearing. Look at her, totally absorbed by her cupcake, face full of sweet food. 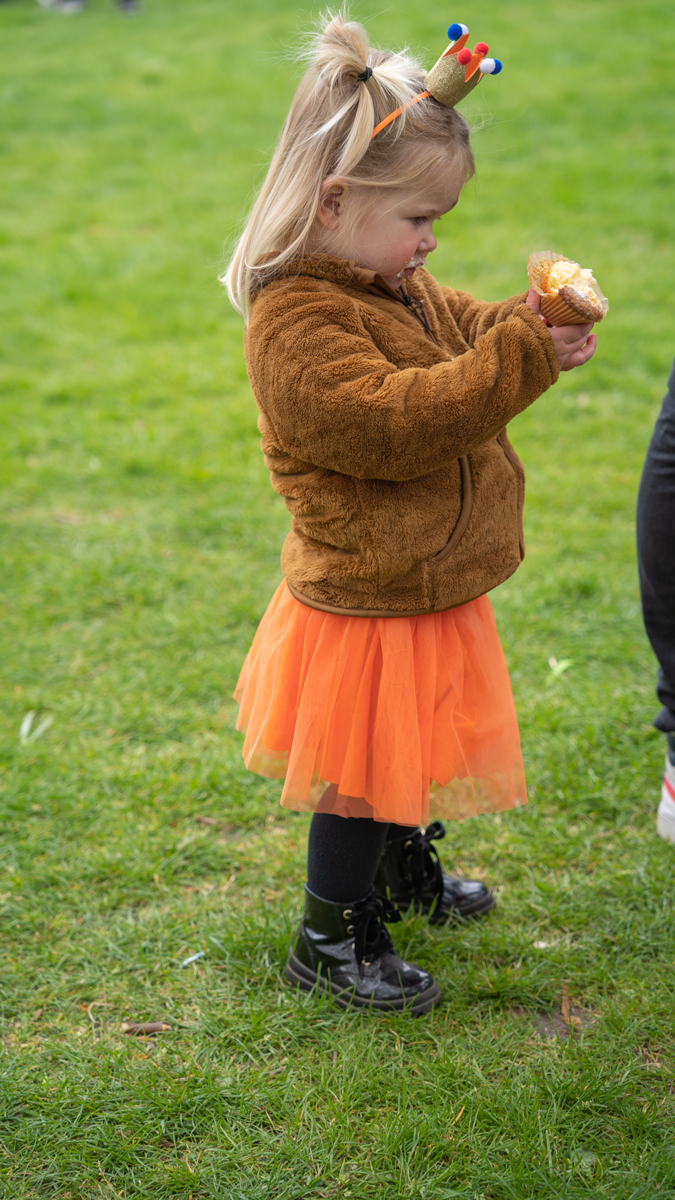 Below: Another little girl wanted to make her acquaintance. Everybody in the whole country is wearing something red, white and blue or something orange. 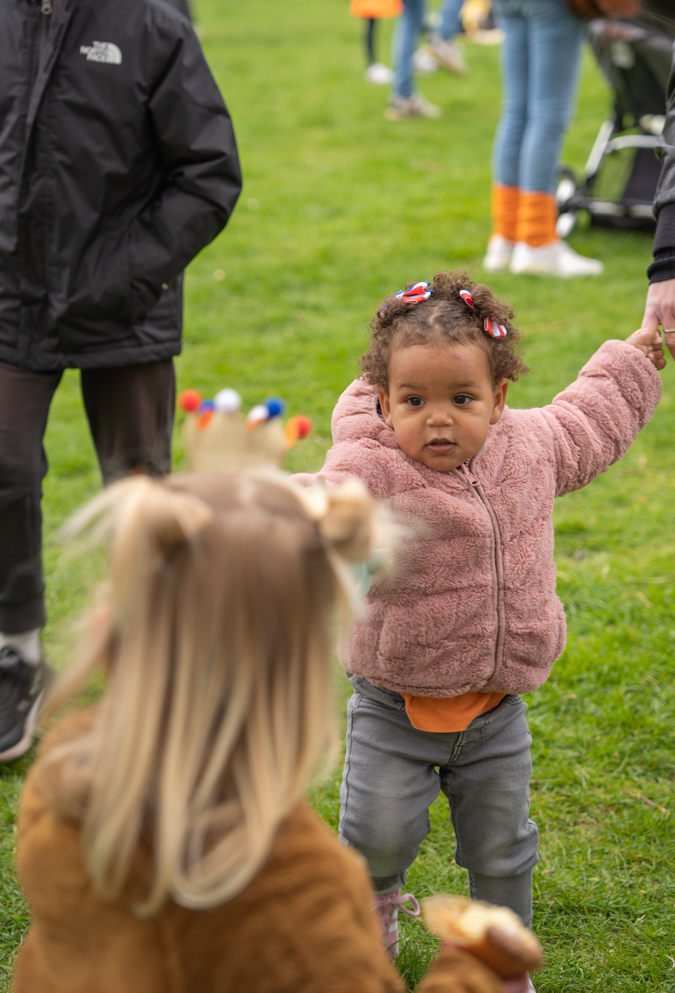 Below: It was busy and I was checking out all the different stalls or should I say blankets? 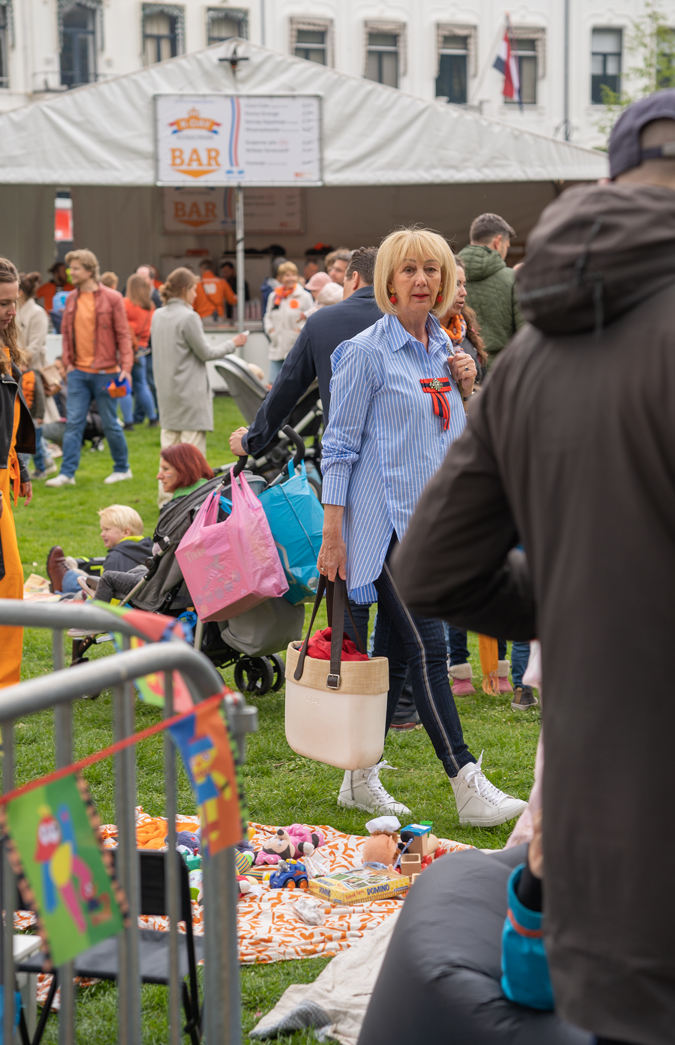 Below: There was one with a sign: ‘Have your portrait done for €1.’ They showed me this portrait as an example and we asked bewildered “Who was this?” 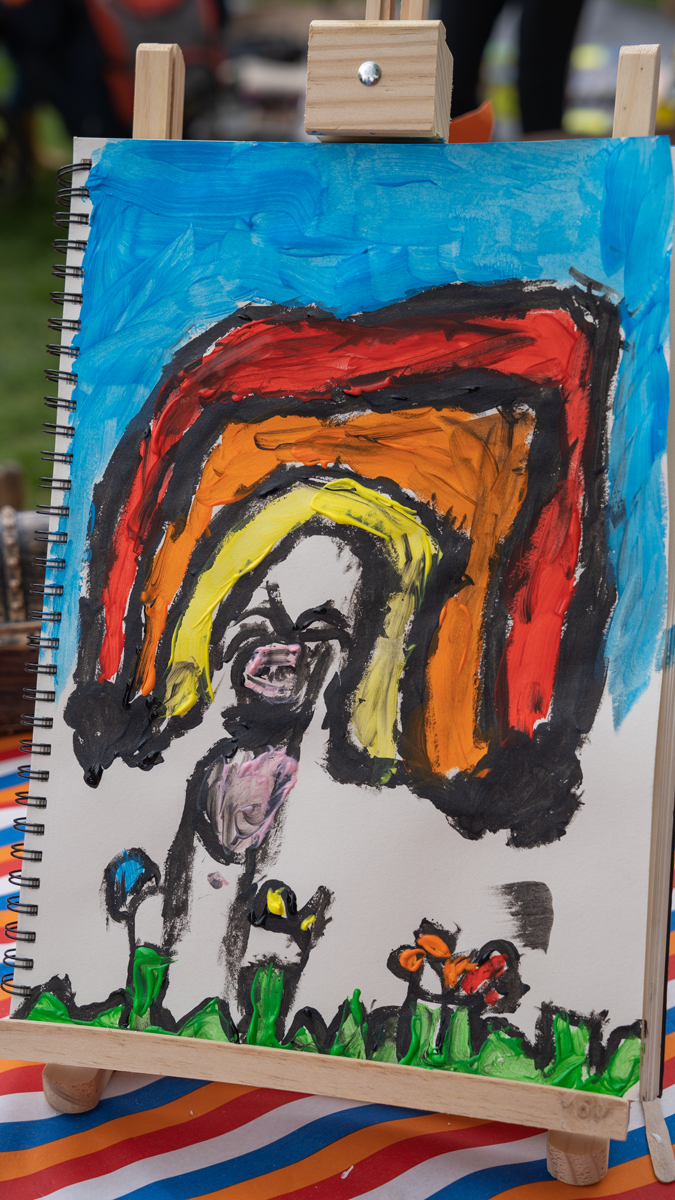 Below: “Me” this lady said with a smile. Whahaha. We refrained. 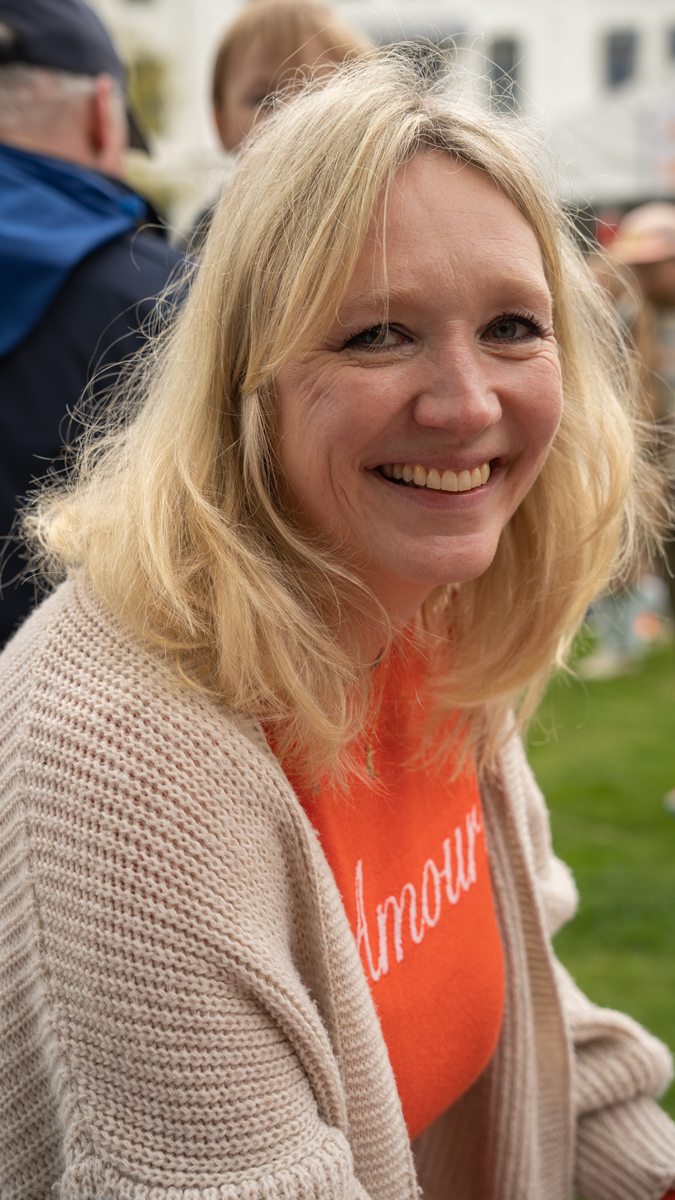 Below: More orange: a father and his wig. Check out the little girl behind him with the orange dots on her face. Very original.
You can buy so many children’s toys for next to nothing that it pays to stock up for birthdays and Christmas if you have little children. 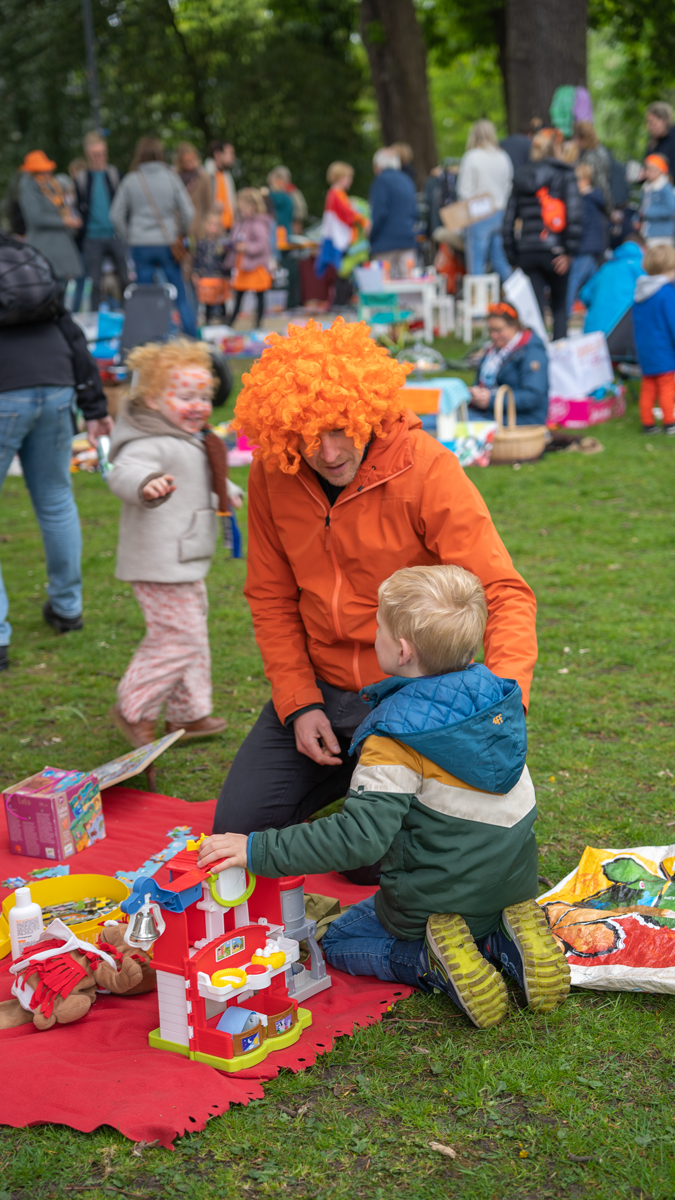 Below: I got interested in a game.
Oh, the sneakers are new and by Zadig & Voltaire. Far too expensive but I have been looking for something like them for a year. 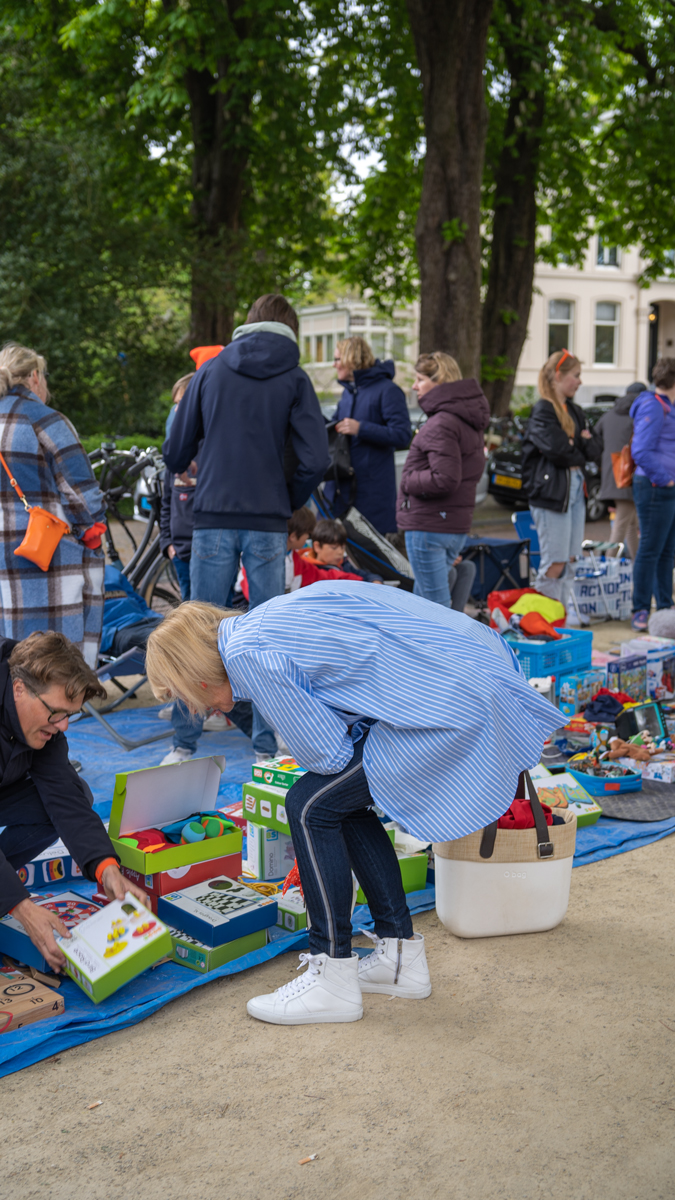 Below: No idea what the man said but it must have been funny. 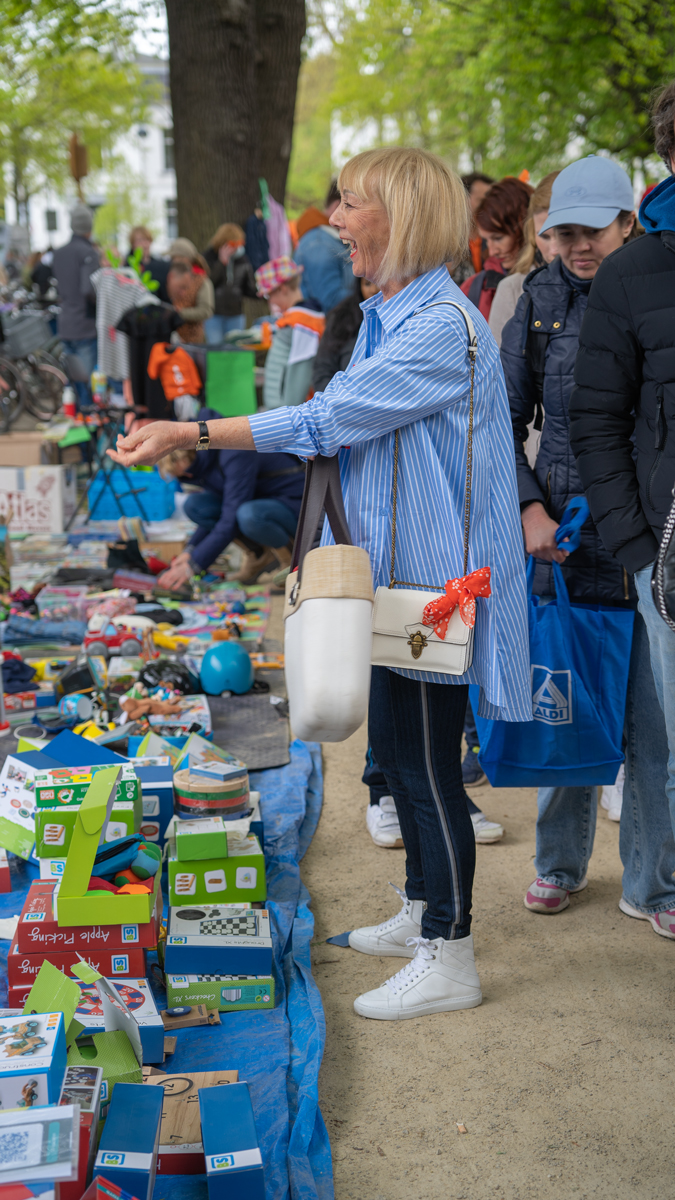 Below: To my surprise I could pay with a QR code. That’s new and very clever as hardly anybody has any loose change these days. 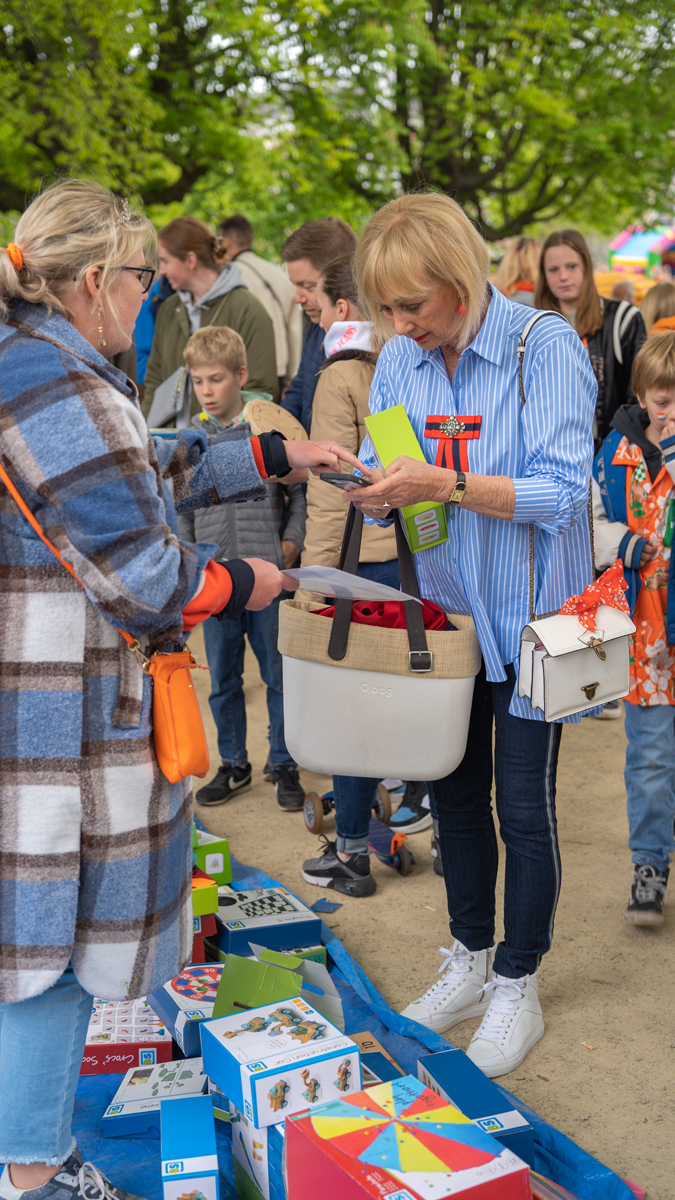 Below: Even though the next two photos are very grainy, I want to show them anyway. Ron had his finger on the ISO button with this grainy result.
The man behind me is holding ropes attached to bears. I had to pay 50 cents and he would drop the bears one by one and I had to catch them, not knowing which one would fall. With every caught bear you got two sweets as a reward. The things they come up with. 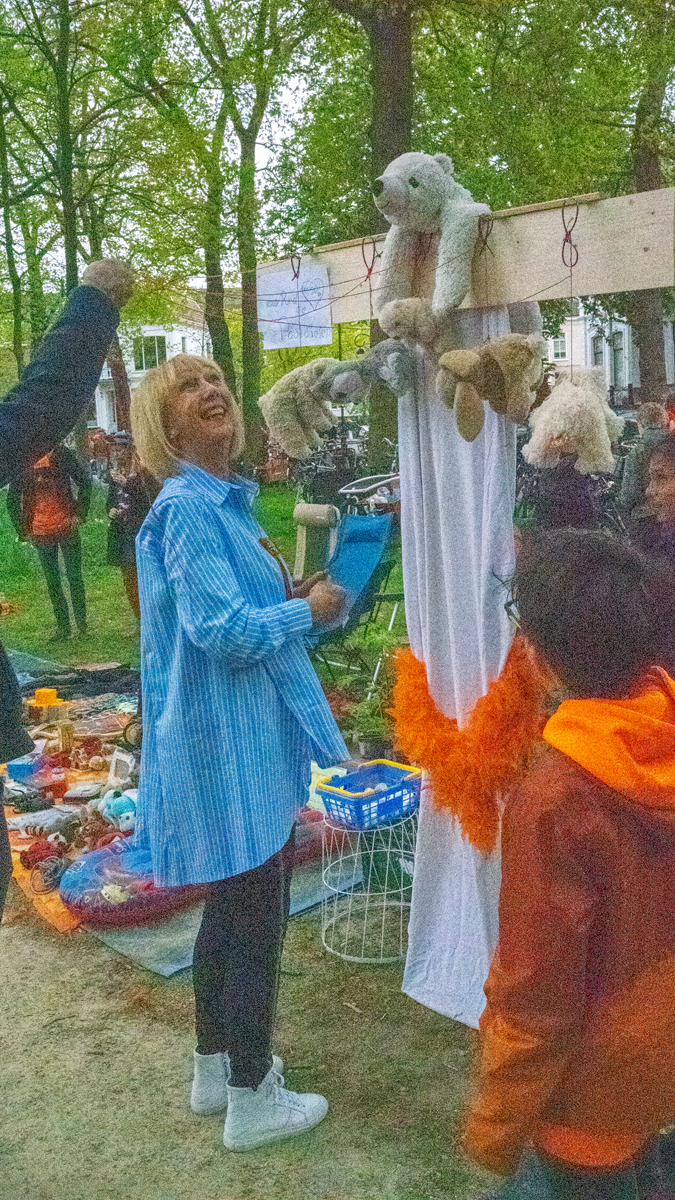 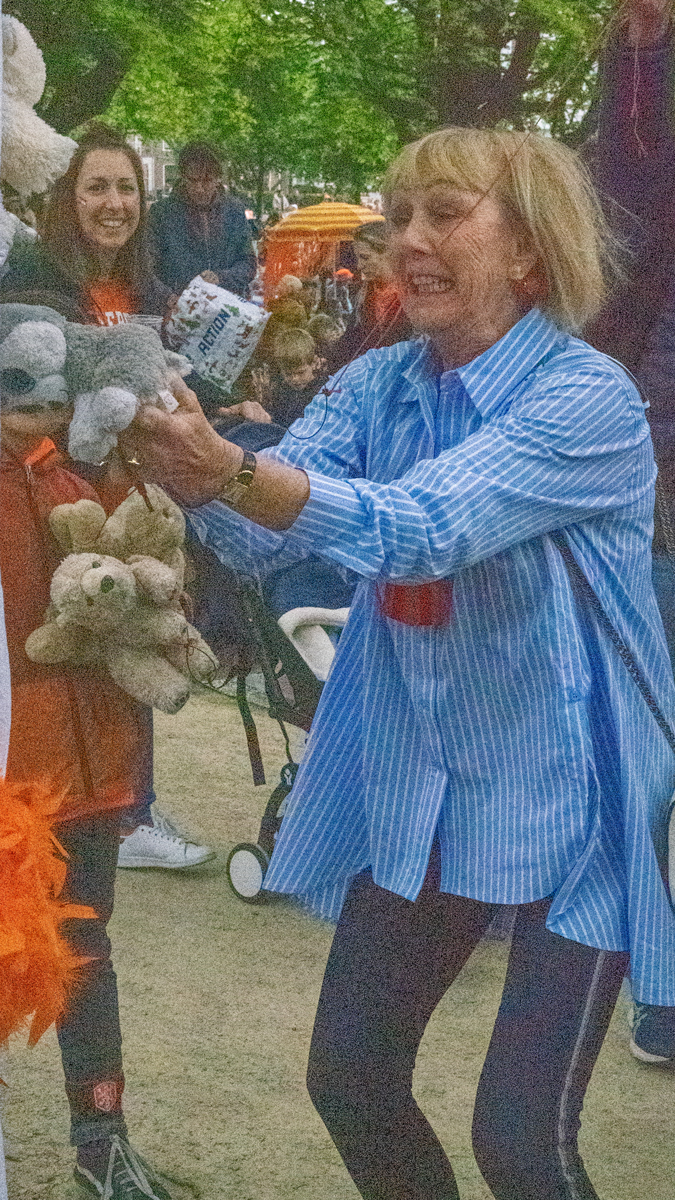 Below: See how easy it is to join the madness? 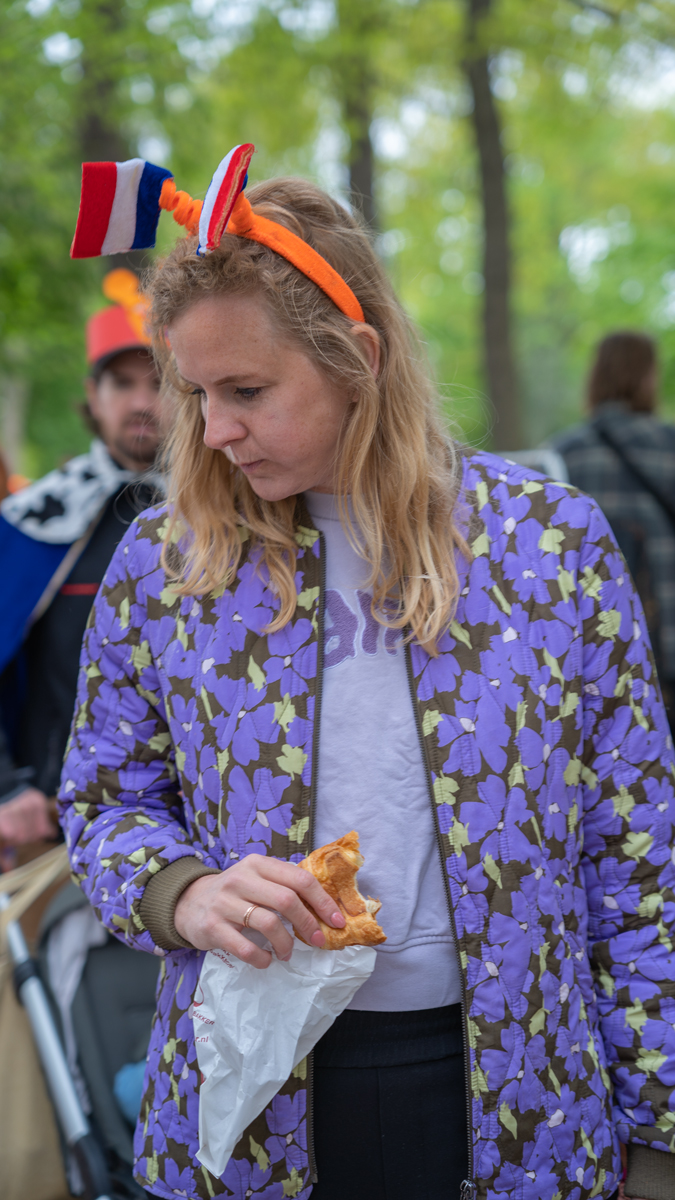 Below: Ah, sweet. He is king on his grandfather’s shoulders, clutching his dinosaur. 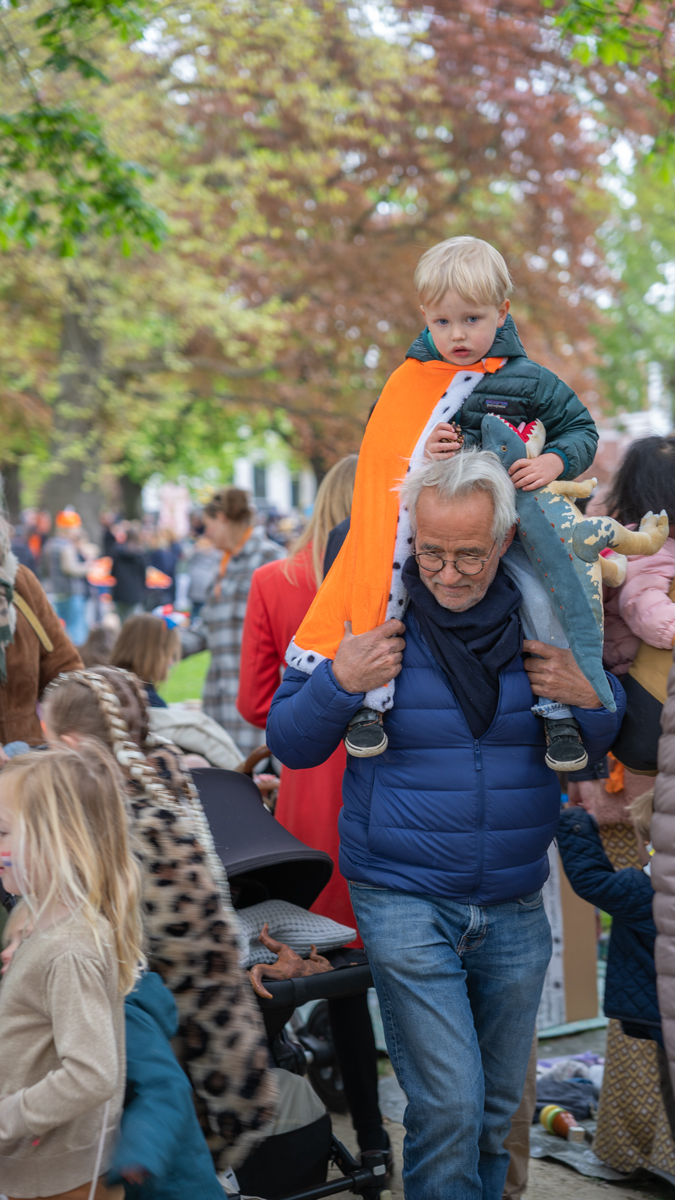 Below: This sign said (amongst other things) that you could get a compliment for 50 cents. 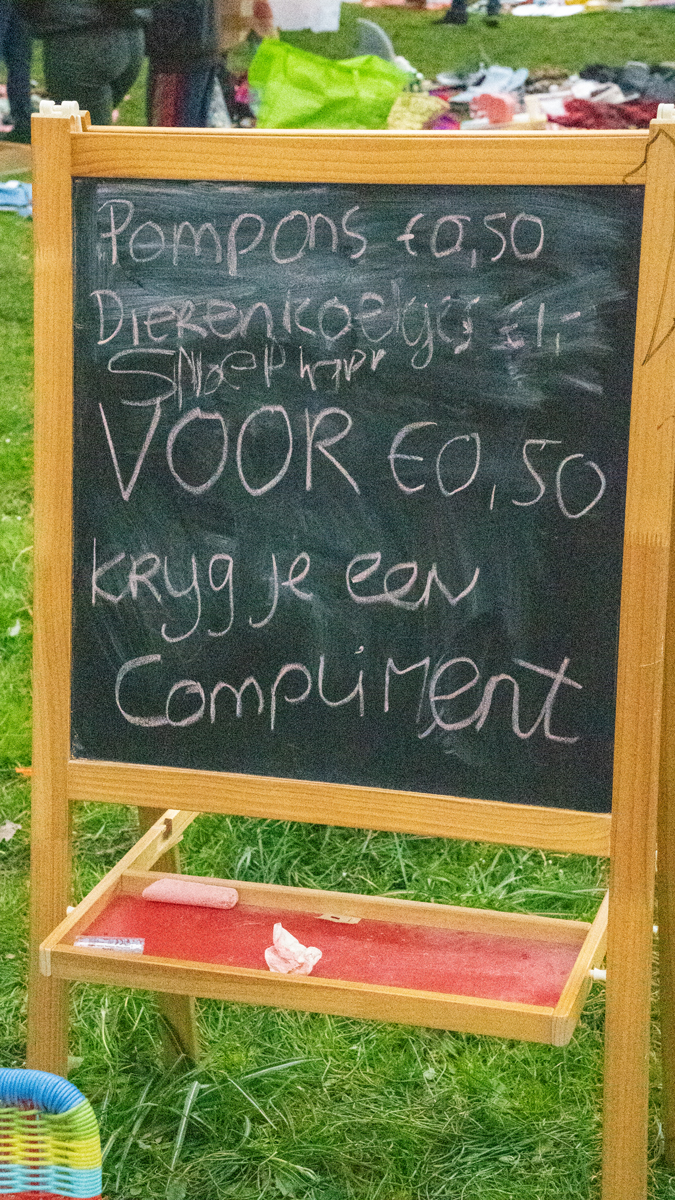 Below: The compliment she paid me was: “You look very stylish” haha. Totally worth the 50 cents. 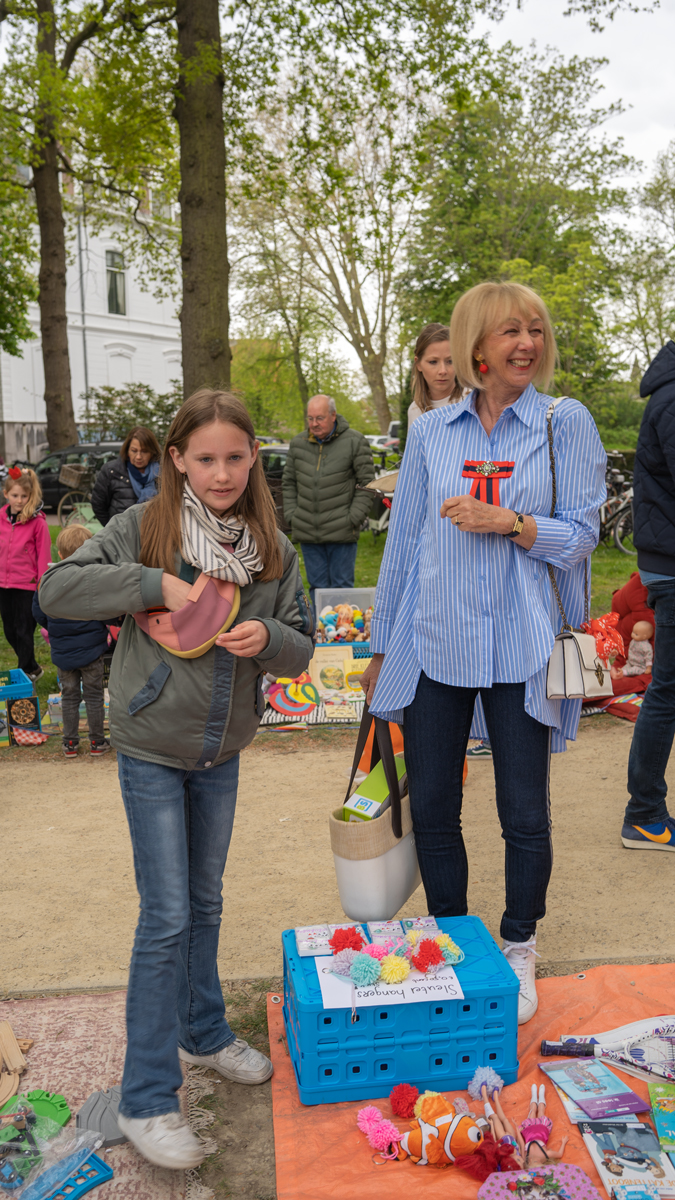 Below: As we left, we spotted these guys. Anything orange is good. 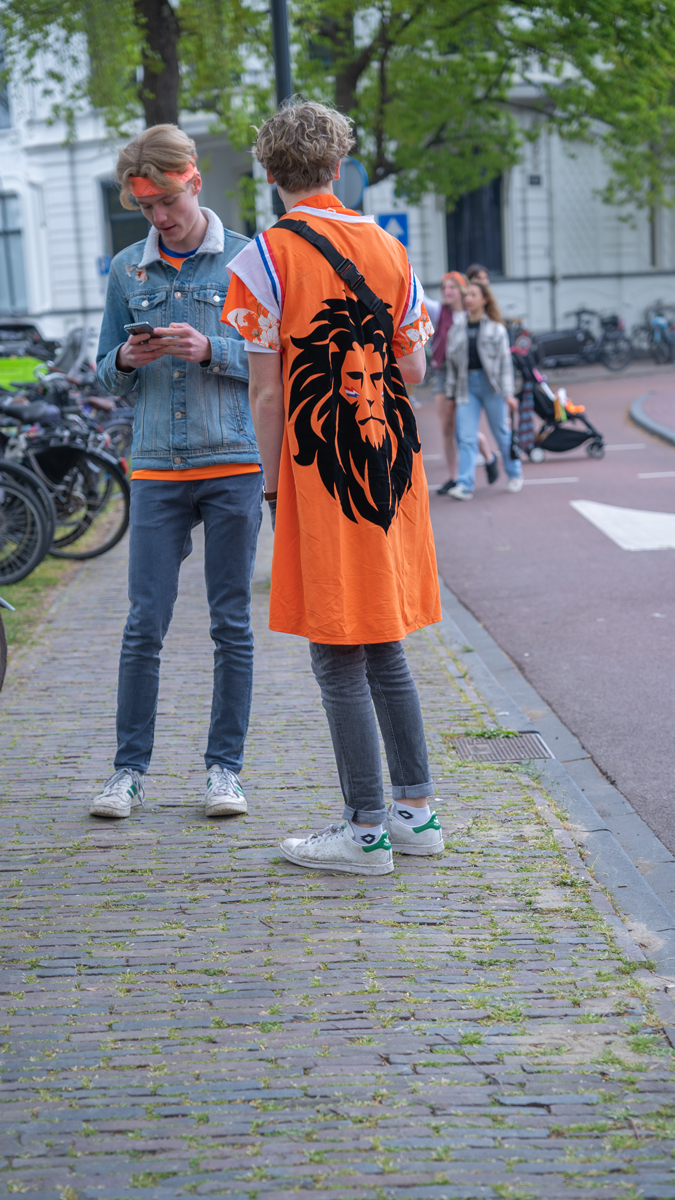 You can imagine that it was pretty cold, walking around with no coat. I had a shirt on underneath but still, it was COLD. Here is a link if you want to see King’s Day photos of 2014, when we did a marvellous shoot in Amsterdam. And King’s Day 2018 wasn’t half bad either.

Saturday was a sunny day but with no dates, no friends to see. That drives me to town to have a cappuccino somewhere and when I wander through town, I see shops and the sales people whom I know. Long story short: I bought another jumper (sweater) as I thought it was unusual and looked good on me. After this purchase I have put a lid on my spendings (again) and transferred money to my savings account as I have to do better.
Below: We still enjoy the flowers our friends brought us Friday last week. Isn’t clematis a beautiful flower? 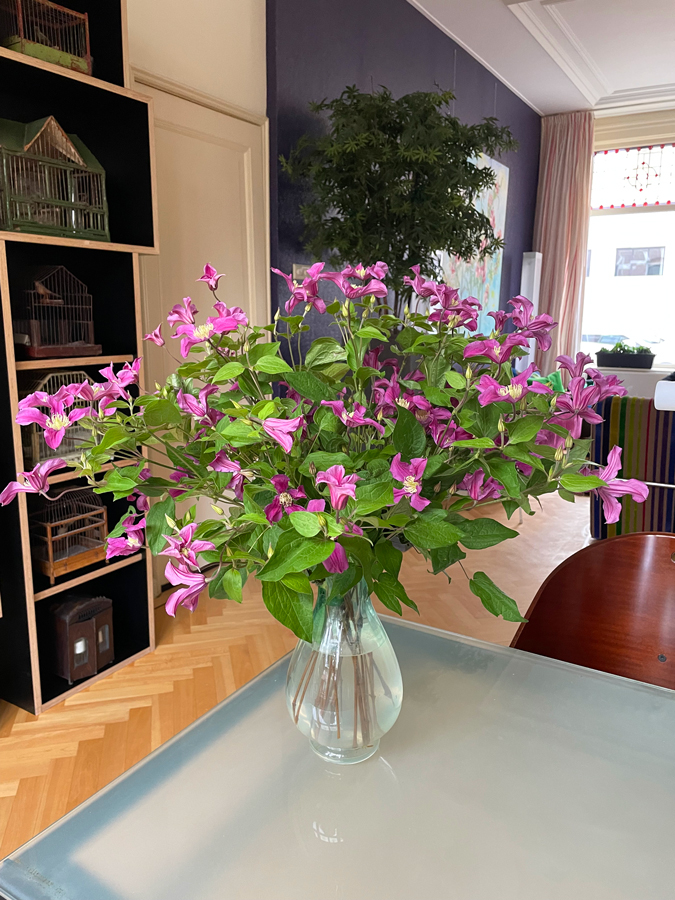 Sunday was visiting-mum-day. She was preparing to have her ears cleaned so she had cotton wool with oil in her ears and couldn’t use her hearing aid. That meant raising my voice too much so we played a game. You don’t have to talk much with Rummikub.
Spending the day with mum, meant I missed the flower parade. (I could have gone late in the afternoon but I totally forgot.) My friend Marla sent me the picture below of one of the parade floats. If you want to know more about this parade or see a couple more floats, here is the link.

Below: A bee on flowers. 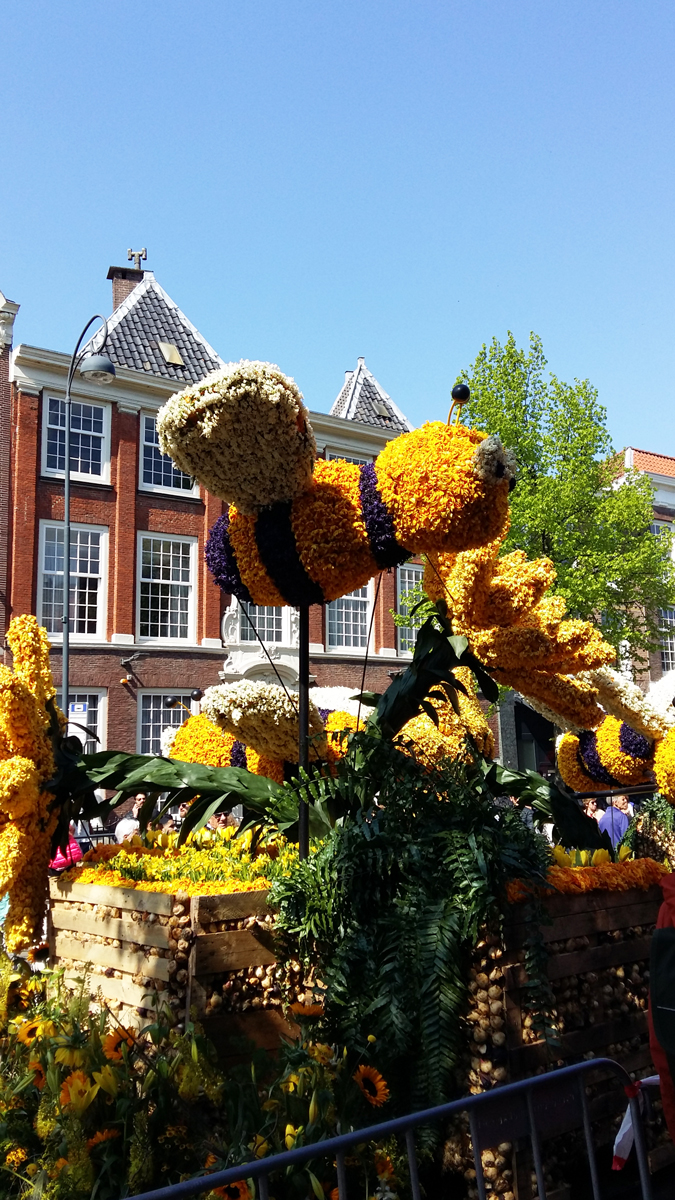 Monday nothing happened. It took me all morning to do my fitness exercises as I started late and was checking social media all the time. Stupid. Didn’t do much. Just some blogging work.

Tuesday was the same as Monday; only household chores kept me busy. Washing, ironing, vacuuming, that kind of thing. I walked with Watson to the vet to get some medicine for an infection and when we got home I noticed it had fallen out of my pocket. I cycled back along the same route and sure enough, there it was on a bench where I had taken a pebble out of my sneakers.

So far this report is really exciting, isn’t it?

Ron came home Tuesday afternoon with two photos of preparations of King’s Day. There is ‘free market’ through the whole country on King’s Day and all the children want the best spot to sell their goods. So the day before King’s Day you see such ‘signs’ on the best spots. It says Occupied, usually followed by the name of the claimer.

Wednesday it was King’s Day (the 27th) and that is what this post is about.
In the afternoon the little splint behind my front teeth broke. Yikes. Everything is closed on this bank holiday so I had to wait until the next day to have it fixed.
We had our friends Georg and Marla over for dinner and Ron cooked. Alas, our oven isn’t heating properly so the food was lukewarm. Such a shame of the lovely food and all the work he had put into it.

Thursday I got out of bed 6.20 a.m. and that is early for a pensioner. I drove to Amsterdam to be at the orthodontist when they opened but the receptionist called me as I was nearly there. “No appointment, sorry, we cannot help you.” Darned. I thought I could sweet-talk my way in. Had to come back in the afternoon. It was fixed in 3 minutes. Just a drop of glue on it as it wasn’t really broken.

That day I finally met Marja. We had to postpone our date so many times. We had lunch at Meneer Frans, chatted and chatted and had coffee. Below: The photo was taken against the light, so the colours are off. We tried to sit in the garden at first but I thought it was too cold. Friday was ‘a hospital day’. I had to take mum to the hospital for a check-up on her heel. The wound hasn’t improved but it didn’t get worse either. We will wait another 2 weeks before taking major decisions.
Below: Mum, waiting in the hospital. 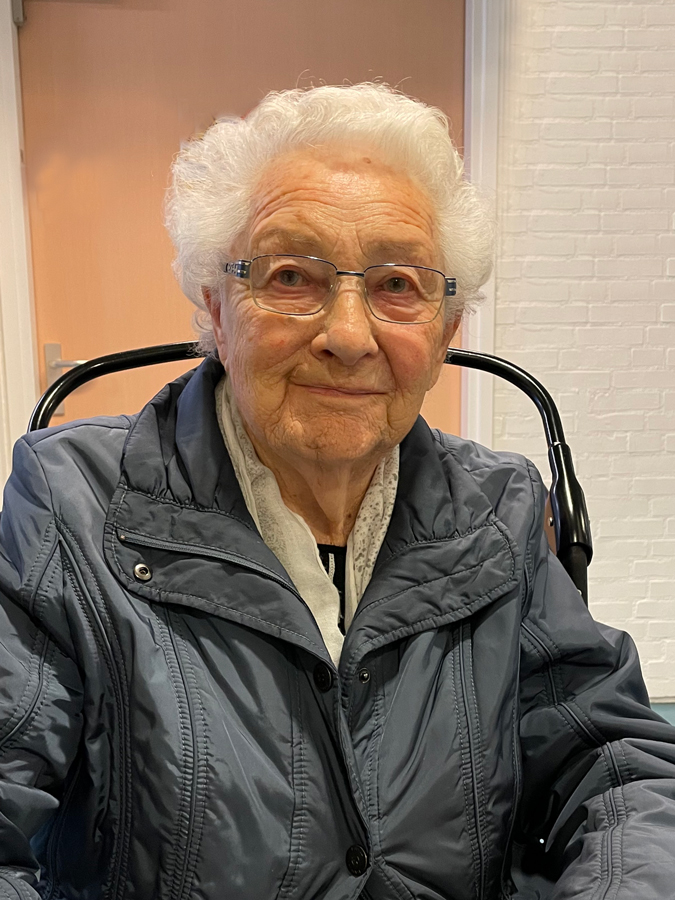 After I had taken mum home I had to rush to Marianne who also had to go to hospital for an injection in her frozen shoulder. I stressed out when there was a road accident on the route to her house but we made it in time. 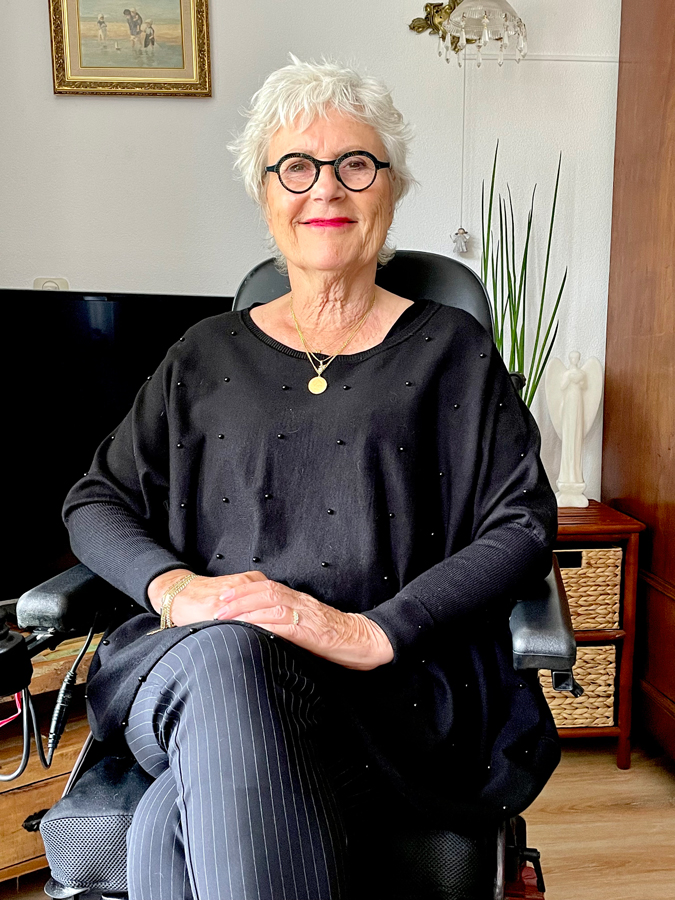 Below: Marianne took a photo of me as well. (Link to the original post of this outfit.) 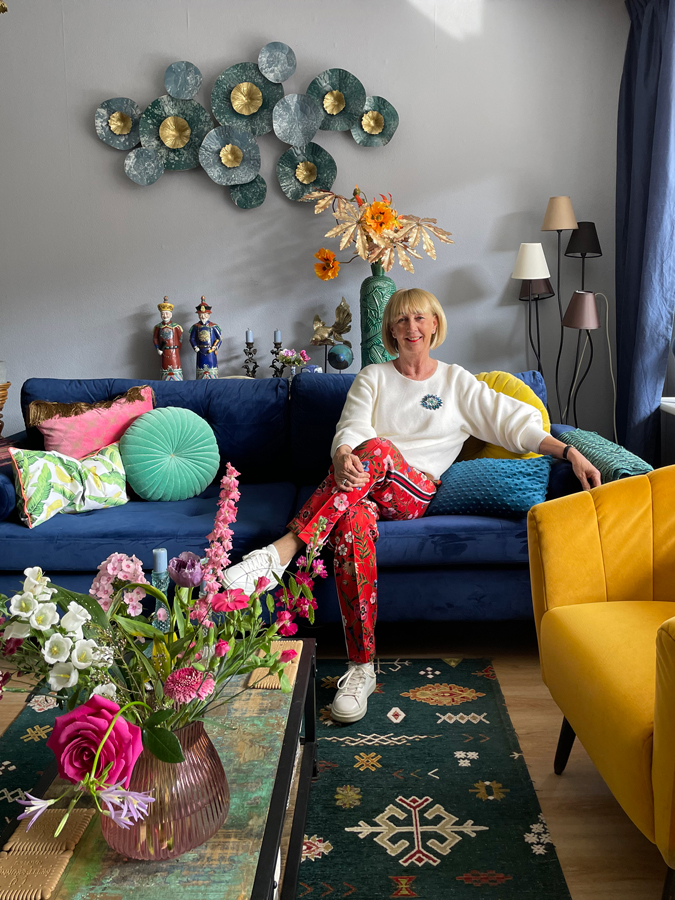 The video below concludes the week.


My name is Greetje, I am Dutch, born in 1954. Married and living with husband Ron, dog Watson and cat Sophie. Pretty stepdaughter is married and lives on her own. This blog is my hobby. I hope to entertain you and make you smile or laugh with the content I post. It is for everyone, but probably most appealing to women over 40, like me (oh, all right...I am way over).

error: Content is protected !!
We use cookies to ensure that we give you the best experience on our website. If you continue to use this site we will assume that you are happy with it.Ok