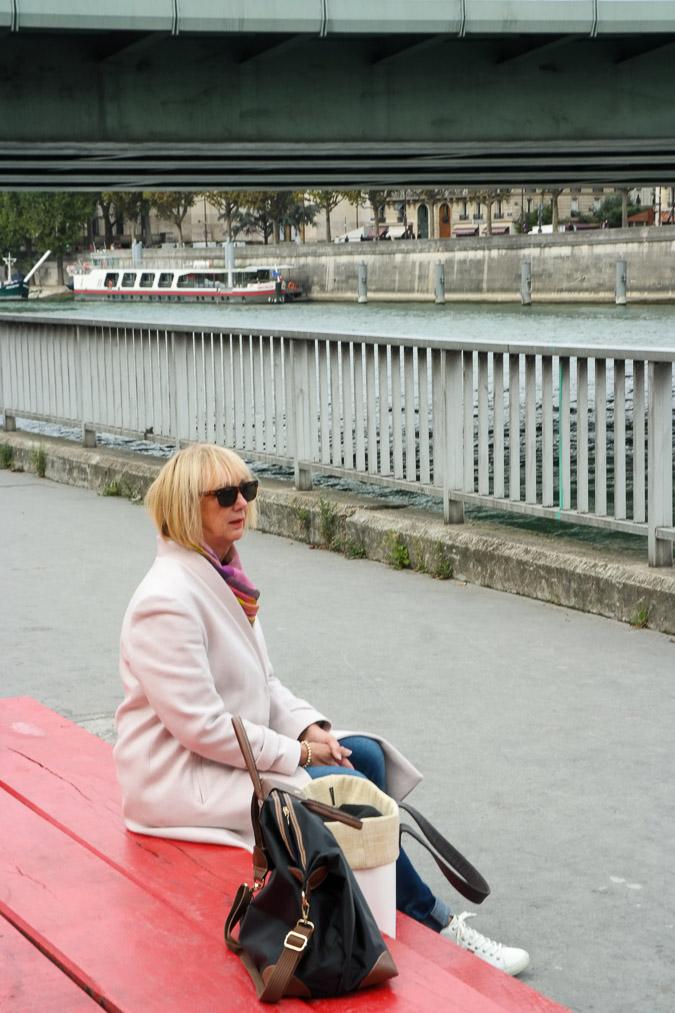 Going back in time, but not much. This photo was taken at the end of September 2016 when Ron and I spent 4 fabulous days in Paris. Of course I have already reported about that trip (striped dress, white dress, sequined top, blue top and trousers). After publishing these four posts it was the end of October and the weather had turned cold. Not a good idea to show you a pink coat. As spring has arrived in The Netherlands it is time to show you this beauty.

Above: on the bank of the Seine.

At the end of summer last year I went to a department store in Amsterdam with Sylvia of 40+Style, who had come over for a couple of weeks. I had just put myself on a strict budget when we came across this coat by Filippa K. Half price in the sale and in my size. Love at first sight. For half a year I had been searching for a spring coat to replace my white leather one which had become far too tight. (Amazing how leather shrinks over time.) Couldn’t find anyting I liked and then, when the money was gone, there it was… the coat. Of course.

I was strong and didn’t buy it. Told Ron about it as I was rather proud of my self control, although also a bit sad. He grabbed his iPad and ordered it online for me as a present. I know you already think the world of him, but he is even more lovable. To honour him, here is a photo of Ron and dog Charlie. Charlie is the love of his life haha. She just had major surgery and is recovering fine. Which means Ron is singing again. 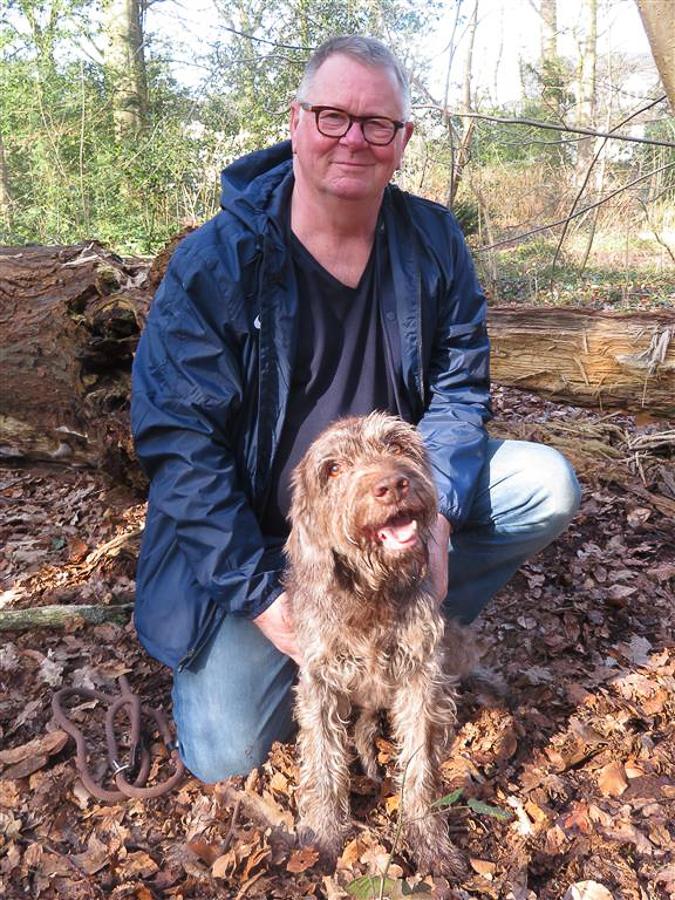 Below: back to Paris. This was my view from the bench at the bank of the river Seine. There is a dinosaur skeleton on top of a boat. No idea why.

Below: it wasn’t as bright and sunny as it had been, but still the light was strong enough to wear sunglasses. The white Obag you have seen before, bought it in Turin. The black bag was very cheap, is very lightweight, very handy and could carry all the treasures I found in Paris back home. That one will come with me on future trips. 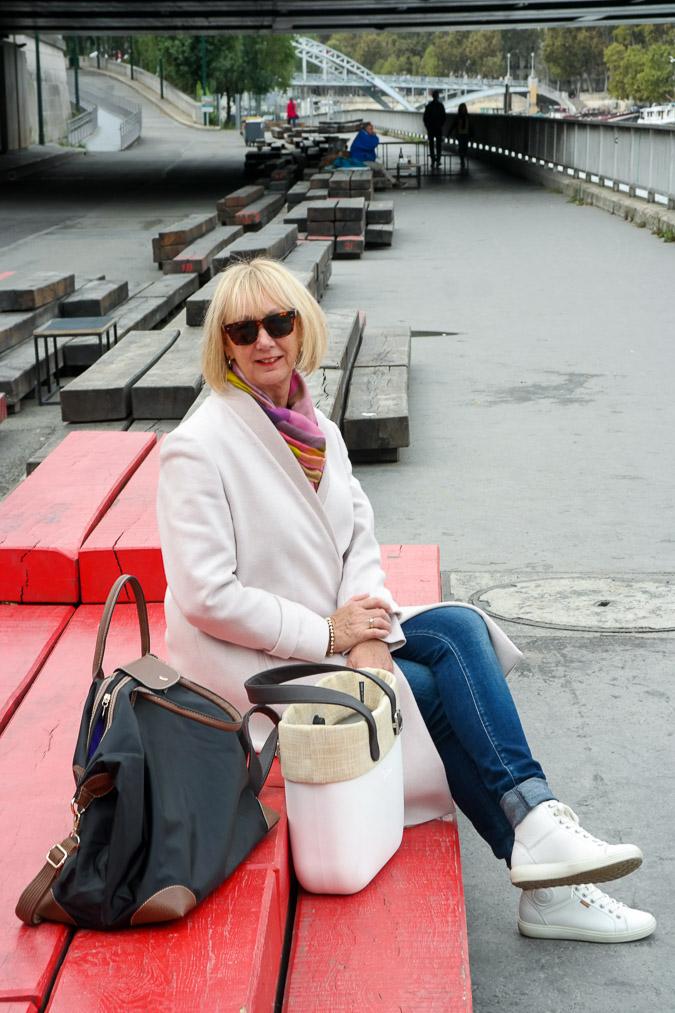 Below: now for a full view of the coat. I have been delaying the head-to-toe picture long enough. Tada…. the colour is pastel pink, slightly on the lavender side. The scarf is one I bought in Paris a couple of years ago. I have various scarves which are good with this coat. I think this one is a bit formal. 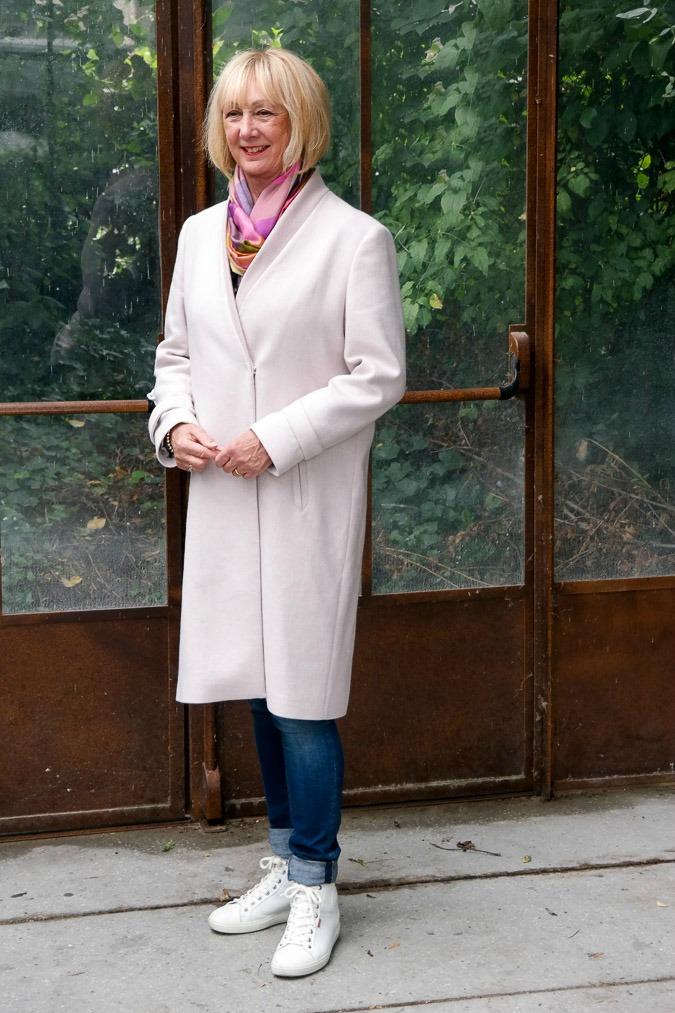 Below: as you know I love to show you all sides… 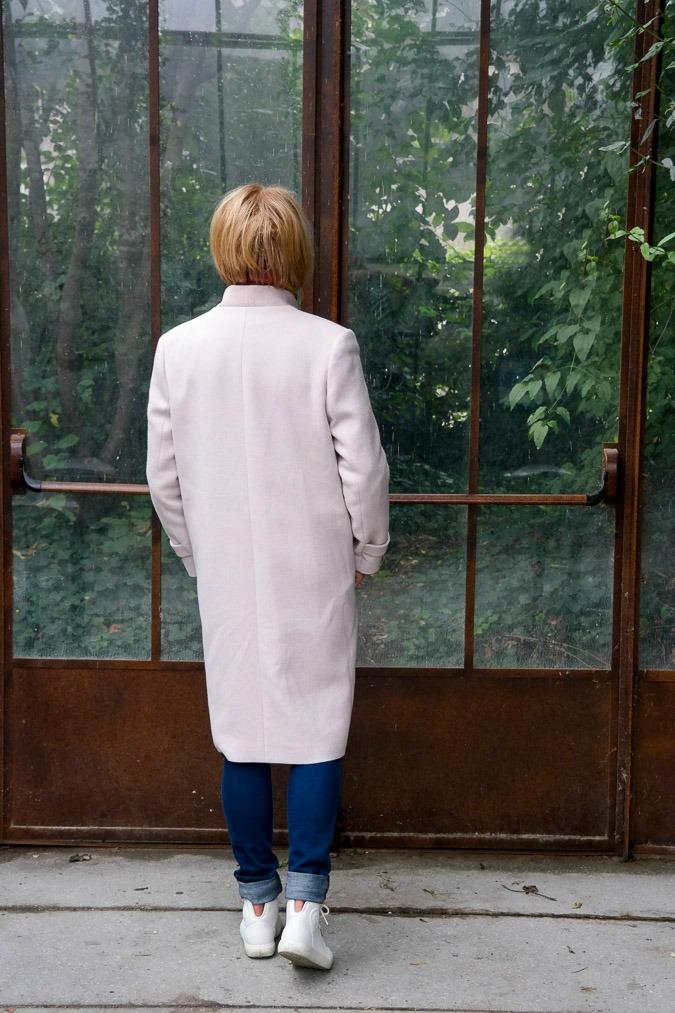 Below: it is the kind of coat you can wear with a dress but also on jeans (as demonstrated). Jeans are Denham and sneakers Ecco. We took these pictures near the Seine where this strange conservatory was. 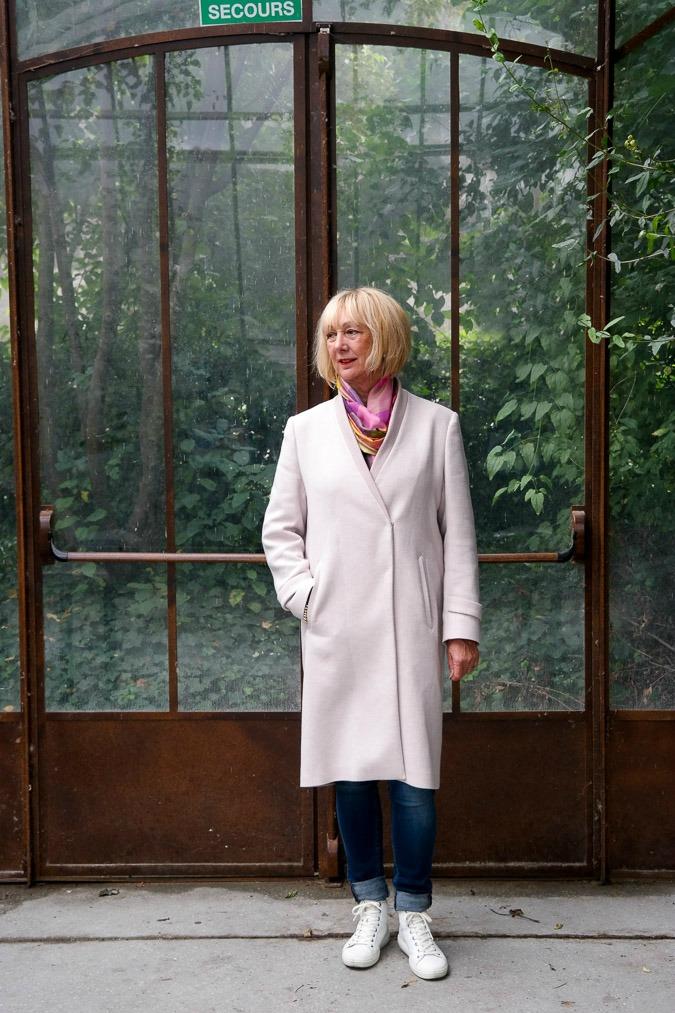 Below: with a view… 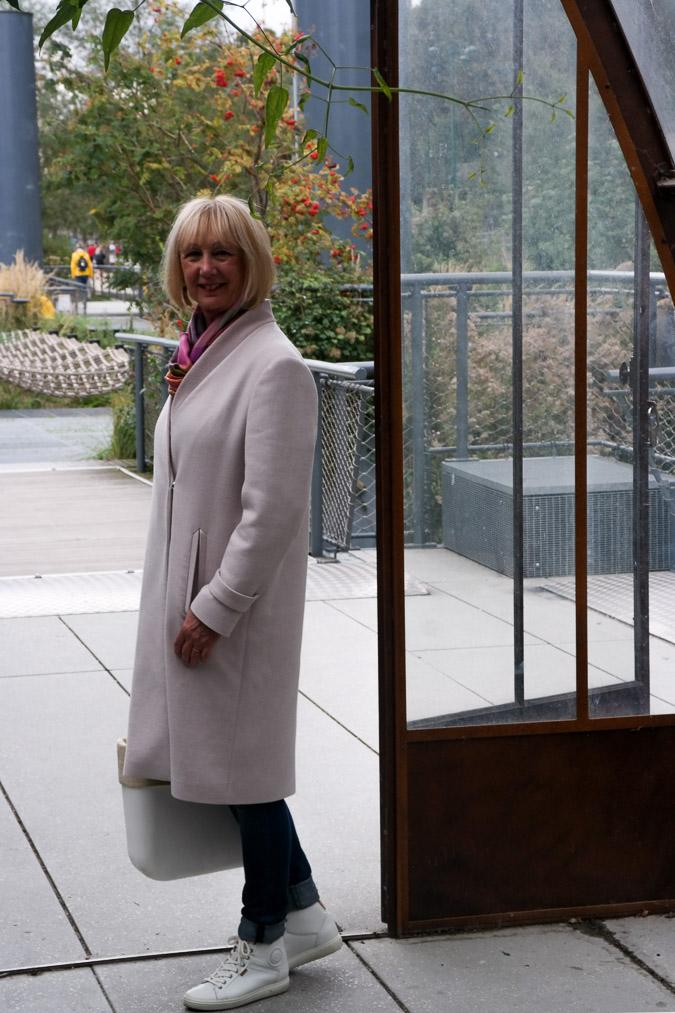 Below: more of the view… Strange, that is definitely a boat in the background, but what are these pipes doing there? And what is the function of those rope “hammocks”? (After note: at the bottom of this post you will find out as one of my dear readers explained it.) 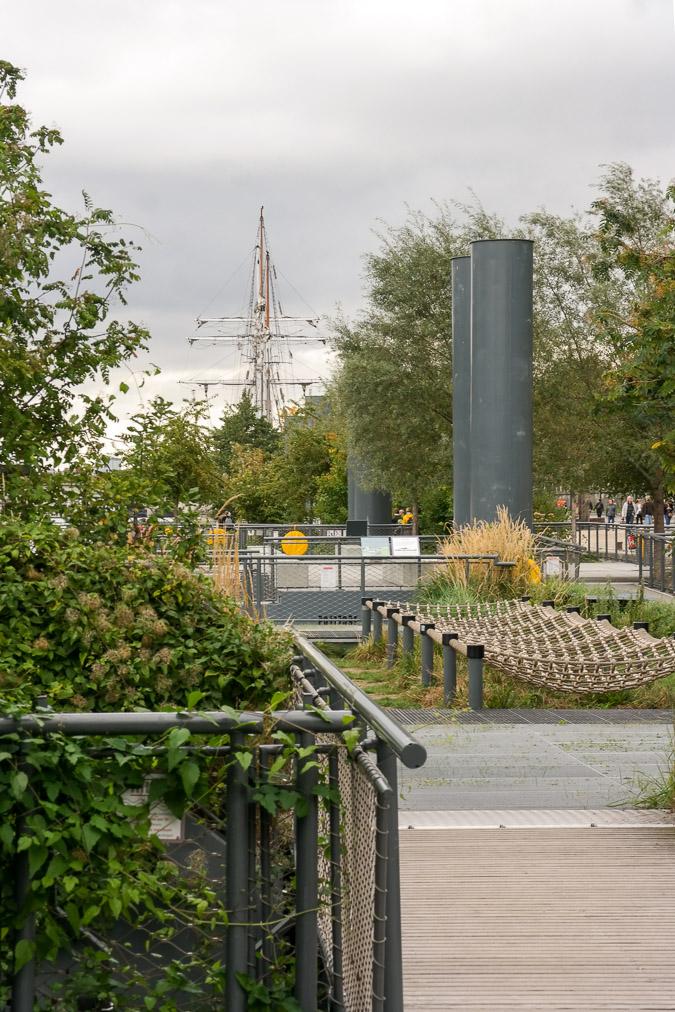 Below: checking the pictures Ron took. Usually to see whether my hair looks alright in the photos haha. 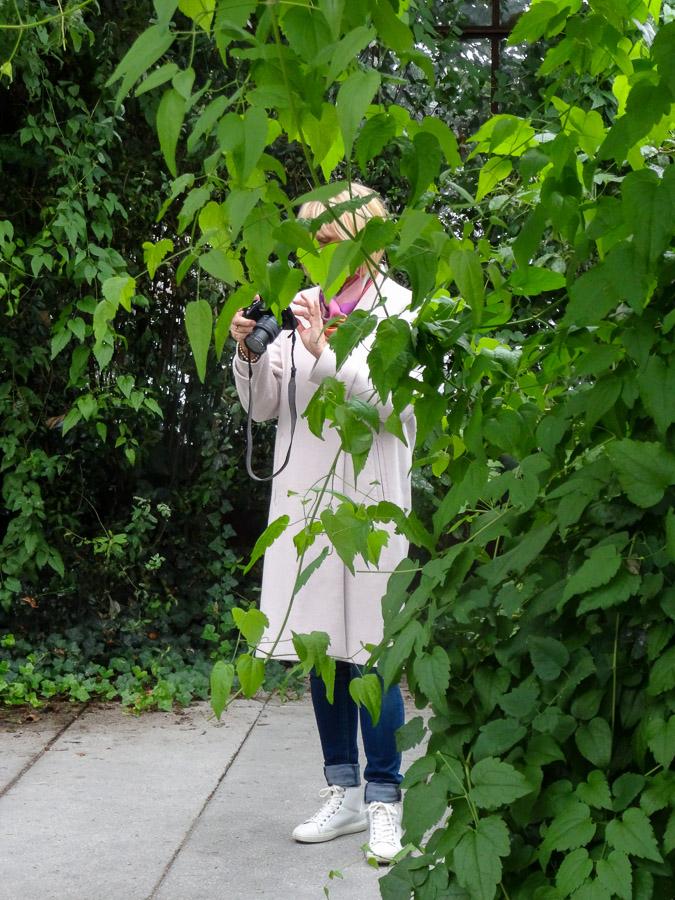 After this photoshoot and having visited the sewers of Paris (gross!) we headed back to town. And yes, I went down the sewers in my new pink coat …

I found a MAC store and remembered they had a terrific fuchsia lipstick I wanted to stock. Not knowing that Ron was playing paparazzo again.

Below: going in the store, you can just see my head. 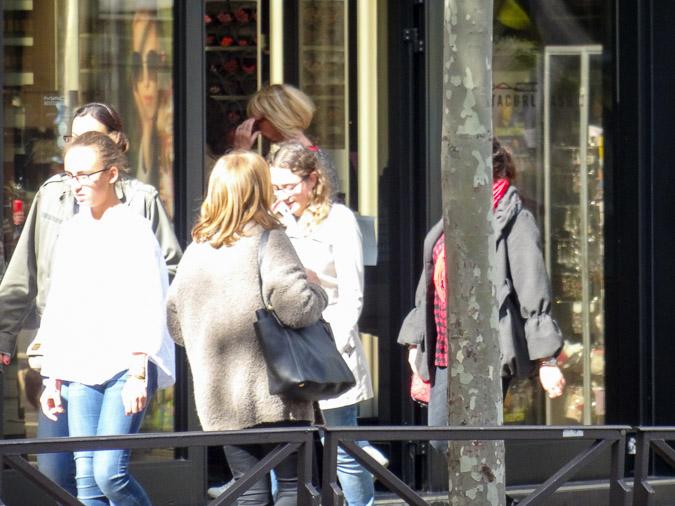 Below: wearing my sequined top from Paris. Bent over to see the colours. 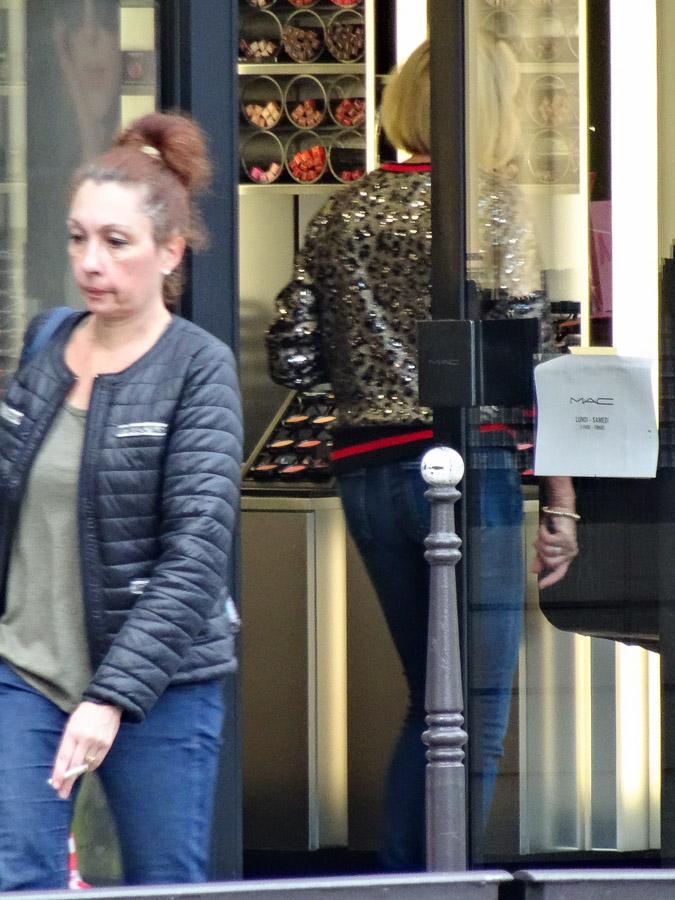 Below: “Excusez-moi… Qu’est que vous dites??” (I speak a tiny bit of French) 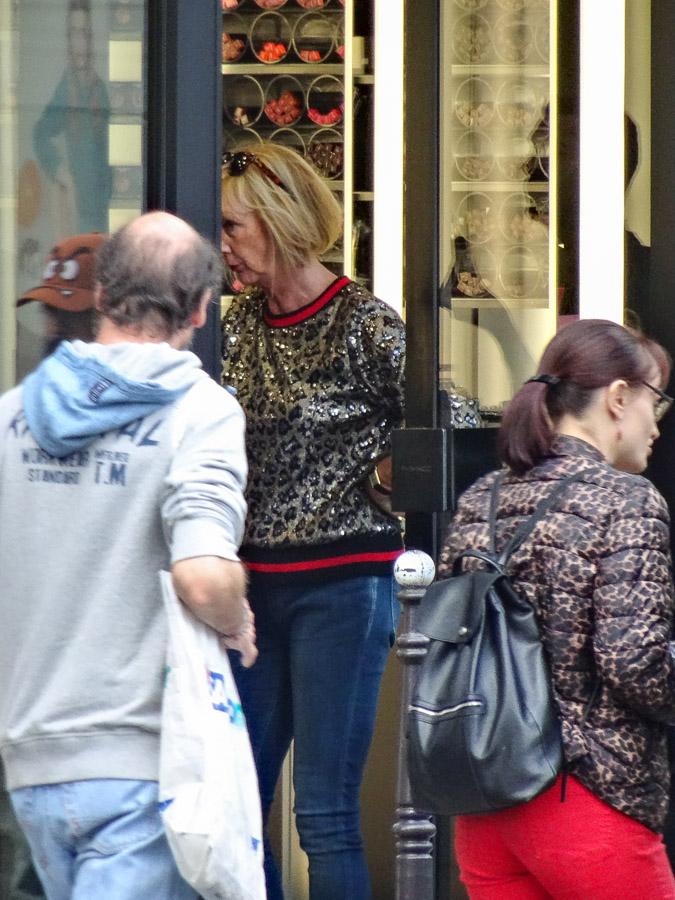 Below: inspecting the colour in natural light. Funny! 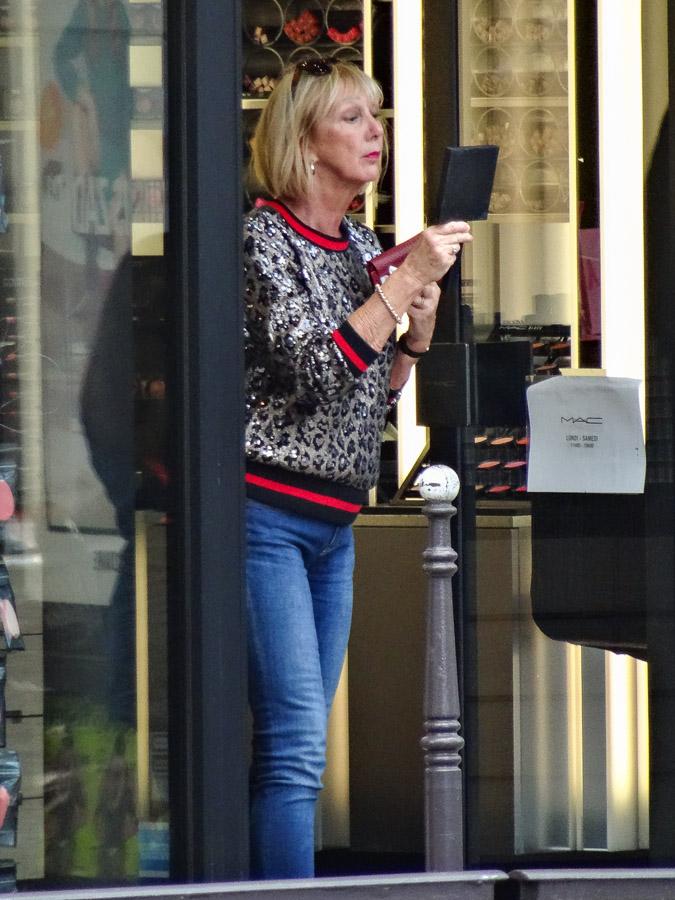 Below: in the pocket 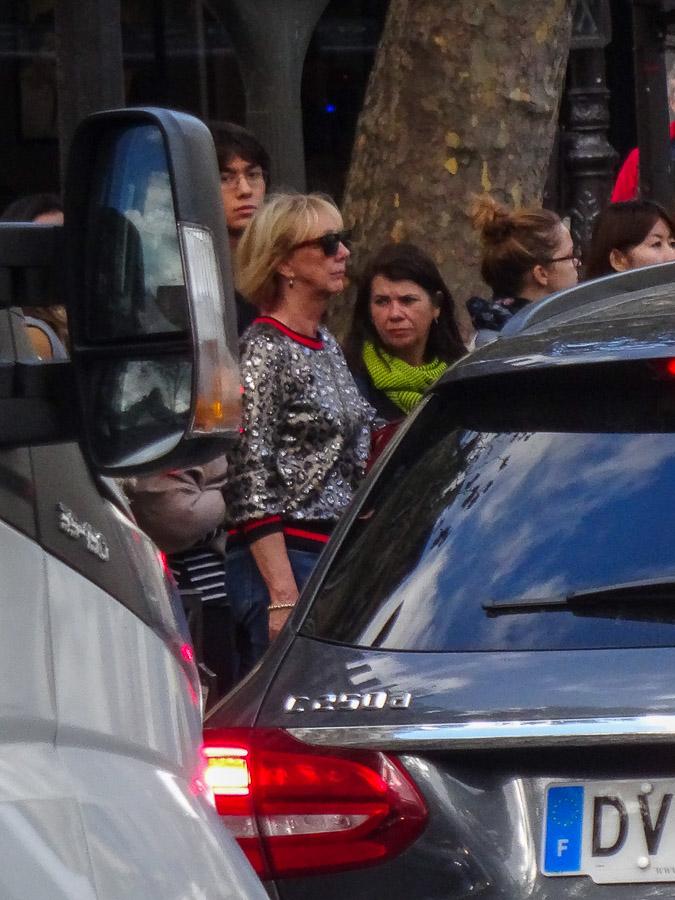 Below: nearly there, crossing the street. Doesn’t it look like a paparazzo photo shoot? 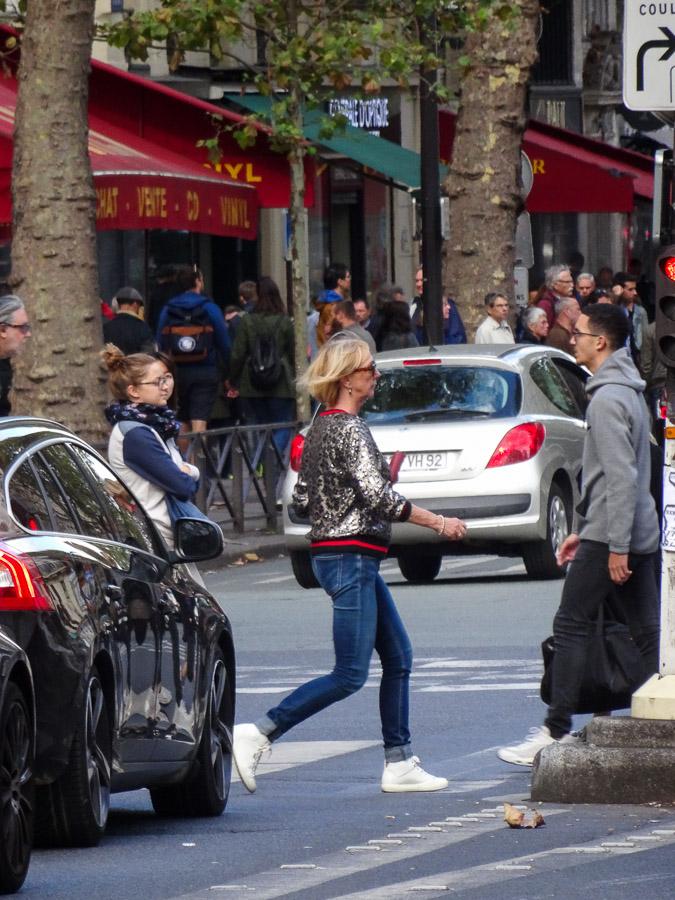 Explanation of the “hammocks” and the conservatory:

“These are the “floating gardens” which is a temporary park with different features for public enjoyment: some educational (like the conservatory you showed – I think), and some for relaxing (hammocks and different types of seating), while others can be rented (tipis and conference rooms).”

Next week another skirt.