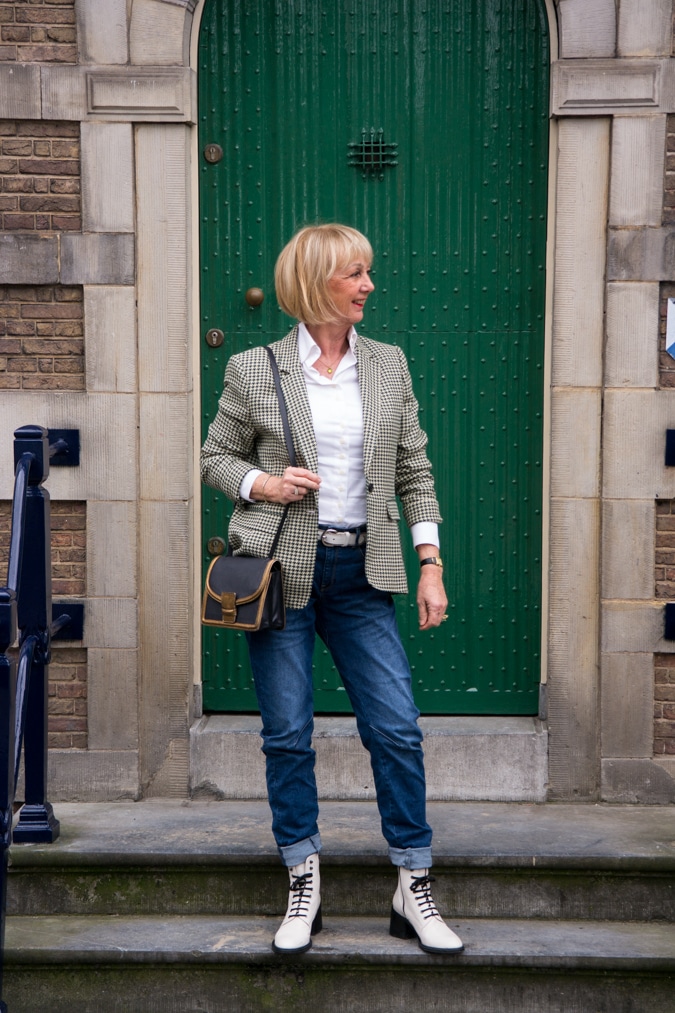 Remember this houndstooth blazer? The first time you saw it on my blog was with a pair of cream trousers. You weren’t impressed. At least that was my conclusion from comments on the blog and on Instagram. Perhaps you thought it was too formal? You suggested jeans.

Of course jeans are the obvious choice, especially for me. Too obvious really, which is why I had opted for a different pair of trousers. Nevertheless, I agree that anything will look good with jeans (in any case on me) and it would take away the formality of the jacket.

Ron was my photographer and he had chosen Rembrandt’s house in Amsterdam as background. This time the pandemic did us a favour as the streets were deserted. We could even park in front of the building (although slightly illegal). You are about to see a lot of photos of the same outfit (sorry, it is difficult to kill your darlings), but all with a different background.

Below: Rembrandt’s house in the middle with its pretty green shutters, which are red when they are open. I was very enthusiastic as green doors and blonde hair make a very good combination. 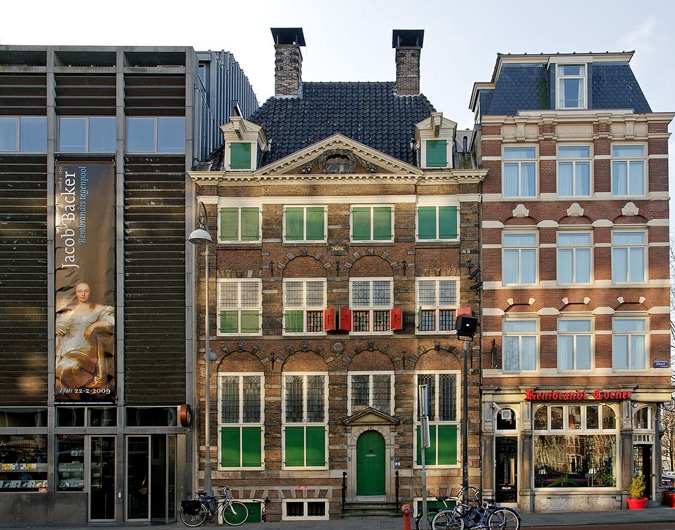 Below: There was still traffic and Ron didn’t want to step into the road and be hit by a car, so he couldn’t get me and the entire building in one shot. 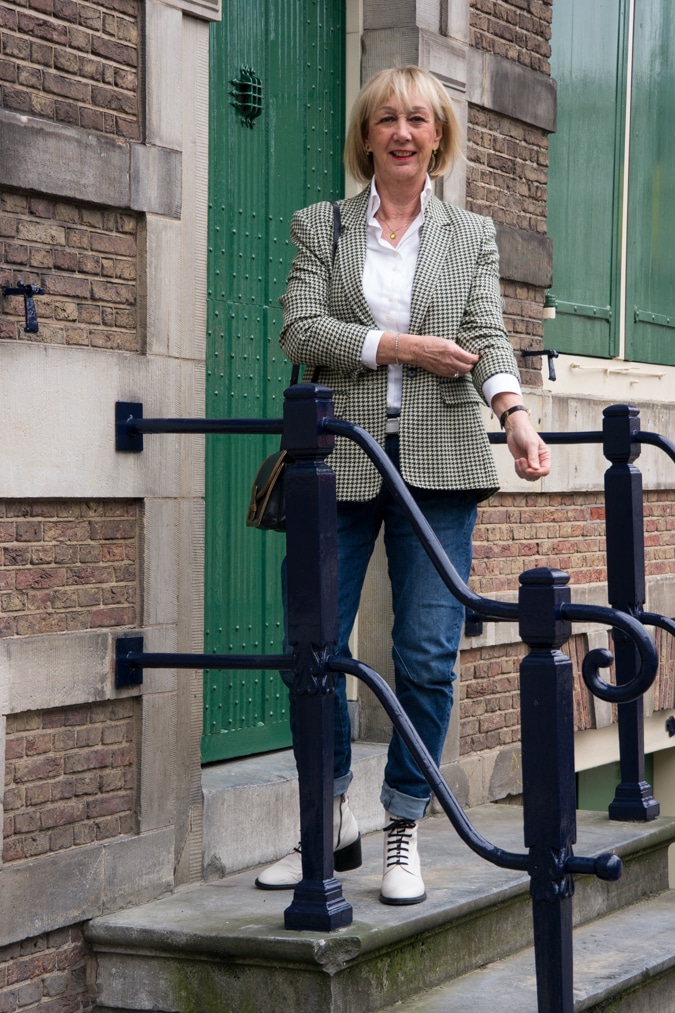 As we were busy with the photo shoot, a couple passed us and the woman said: “He isn’t at home, you know.” (It took me a few seconds to realize she was talking about Rembrandt). Ron replied quickly: “Never mind, as long as Saskia is there to make me a cup of tea.” This is typical Amsterdam wit. Commenting on everything you see and in a joking way. I love it. It is the main reason why I miss living in Amsterdam so much. That and the feeling of freedom the city gives me. Alas, houses are too expensive there.

Below: The building, like the majority of old houses, has a basement. Very handy to supply the kitchen. 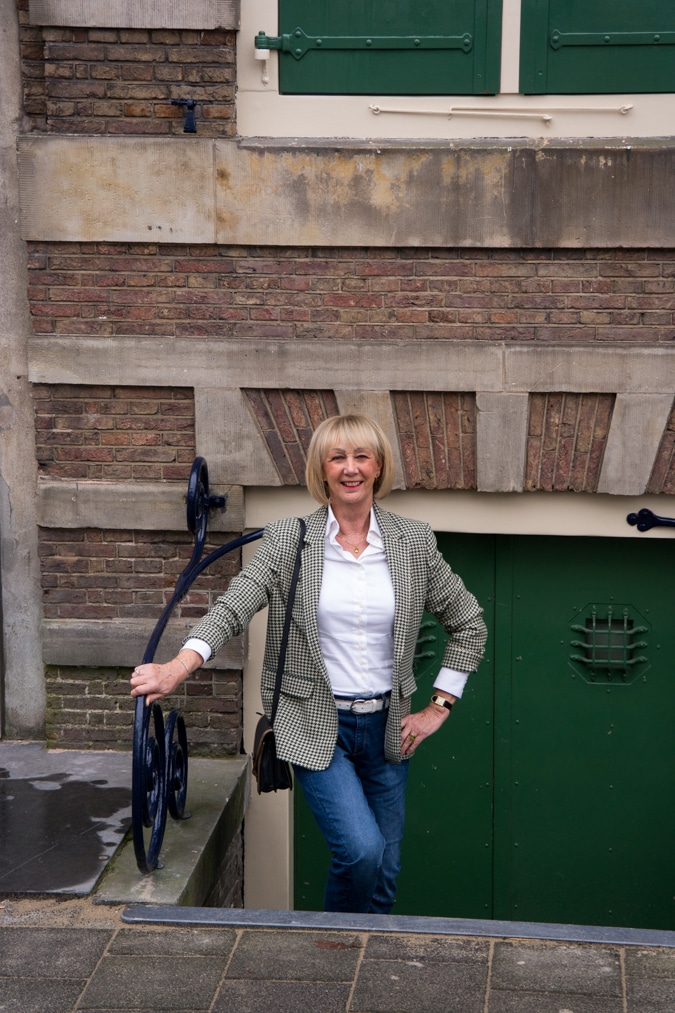 Below: We popped across the road and looked for some shelter from the wind behind Café de Sluyswacht. (Try and pronounce that when you aren’t Dutch haha; it is a real tongue twister.) 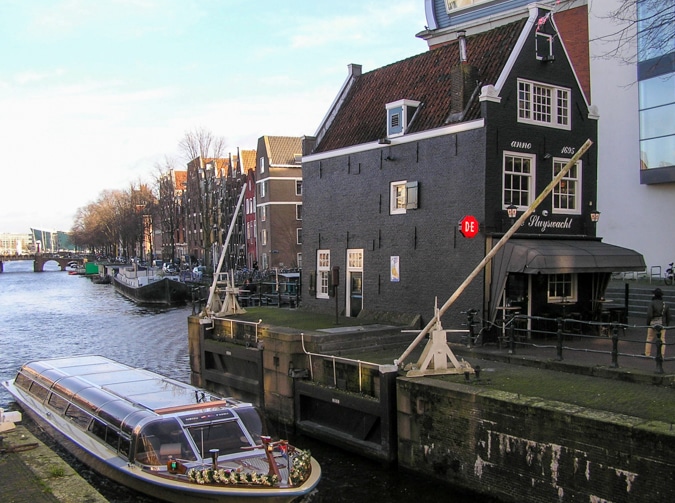 Below: Right… after fixing my hair and clothes. it was possible to take a nice photo. My beloved Dries van Noten bag is fine with this outfit in my opinion. I am blessed with many beloved bags. 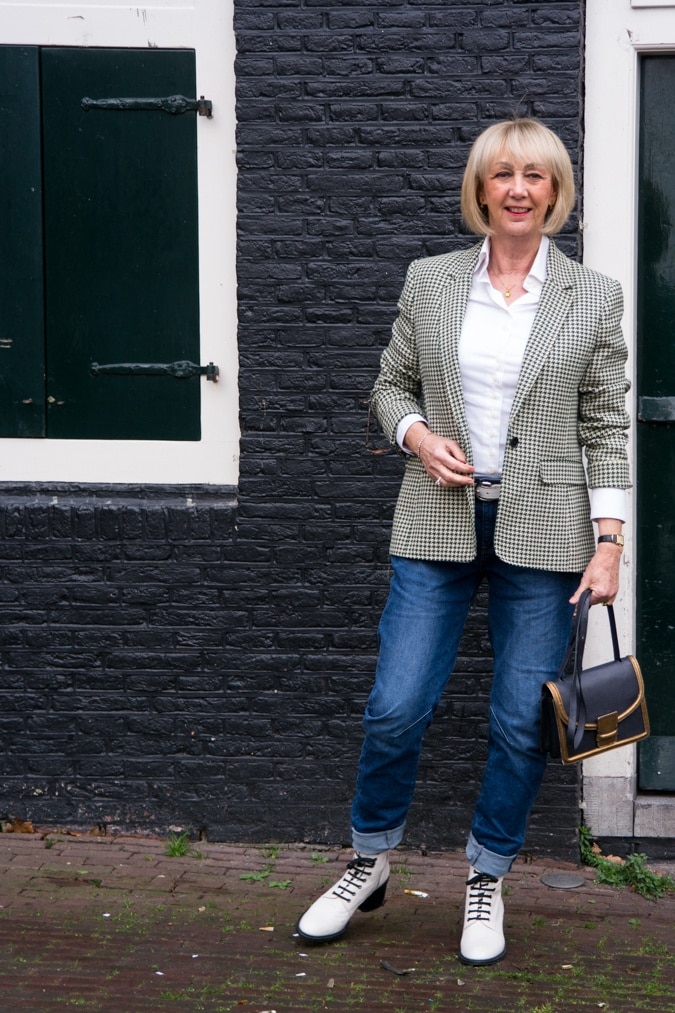 Below: I had to do some editing with this photo as the ground was covered in litter. I do not photoshop my face or hands or such; they remain wrinkly, but litter on the floor spoils the photo. 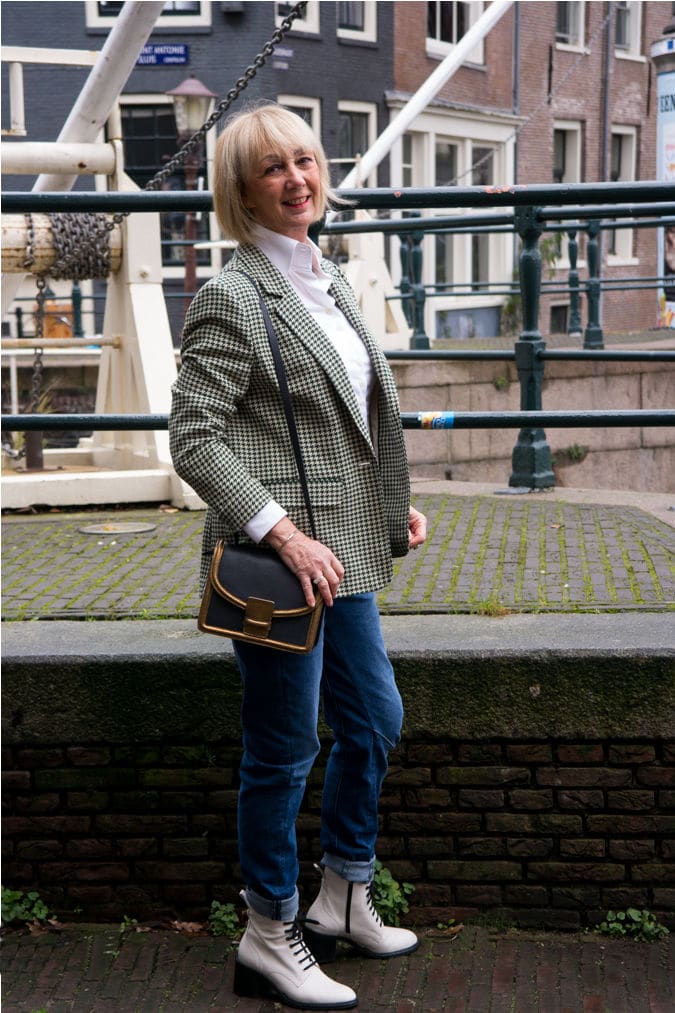 Below: Great view across the canal from here. Use your imagination to see sunshine and green trees. On the day of our shoot, the weather was grey and cold. That didn’t stop people from cruising the canals in their boat. Brrr… cold. 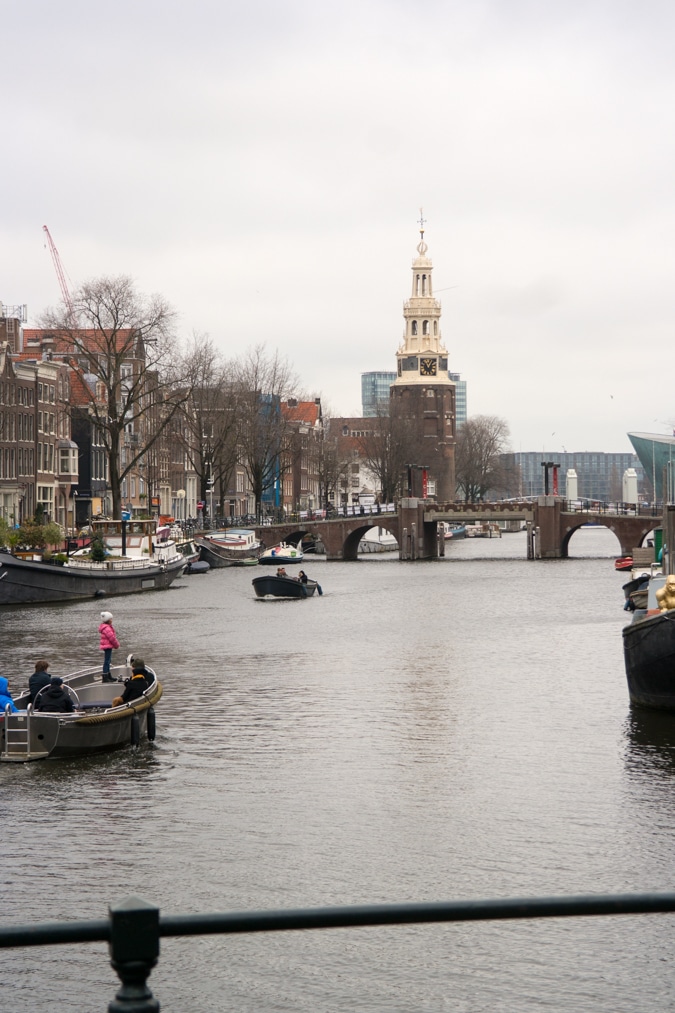 Below: Jeans getting stuck behind that piece of leather at the back of the boots. Why do they make them like that? What is the idea behind it? Don’t they do research? 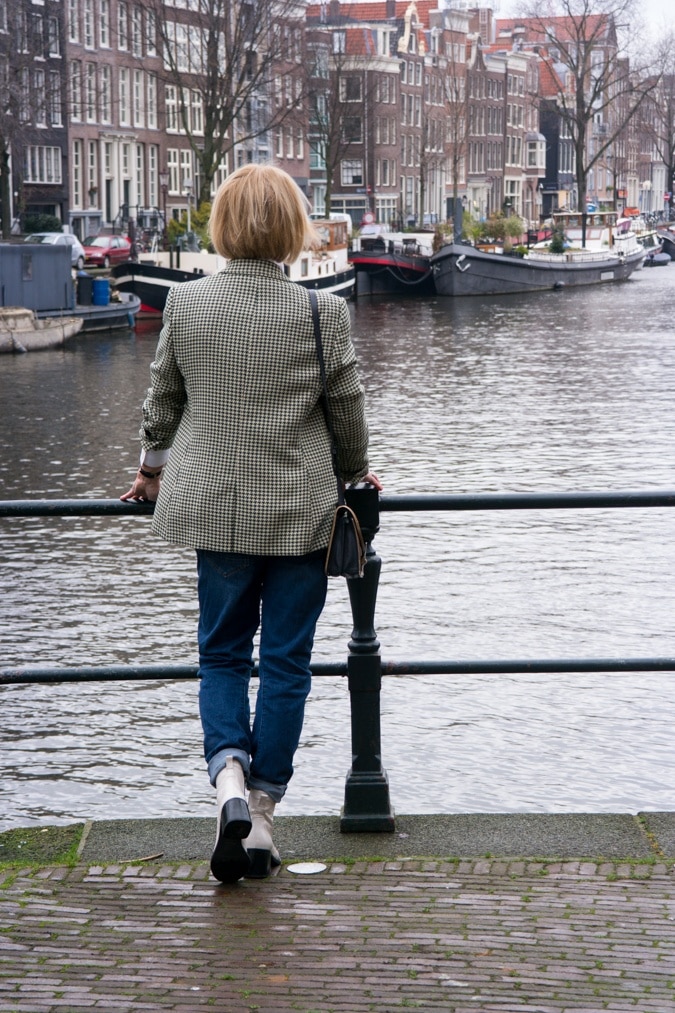 Below: Ron tried his hand at a “bird’s eye view” photo. No need to explain, the word phrase says it all. The boat you see behind me, is a houseboat. 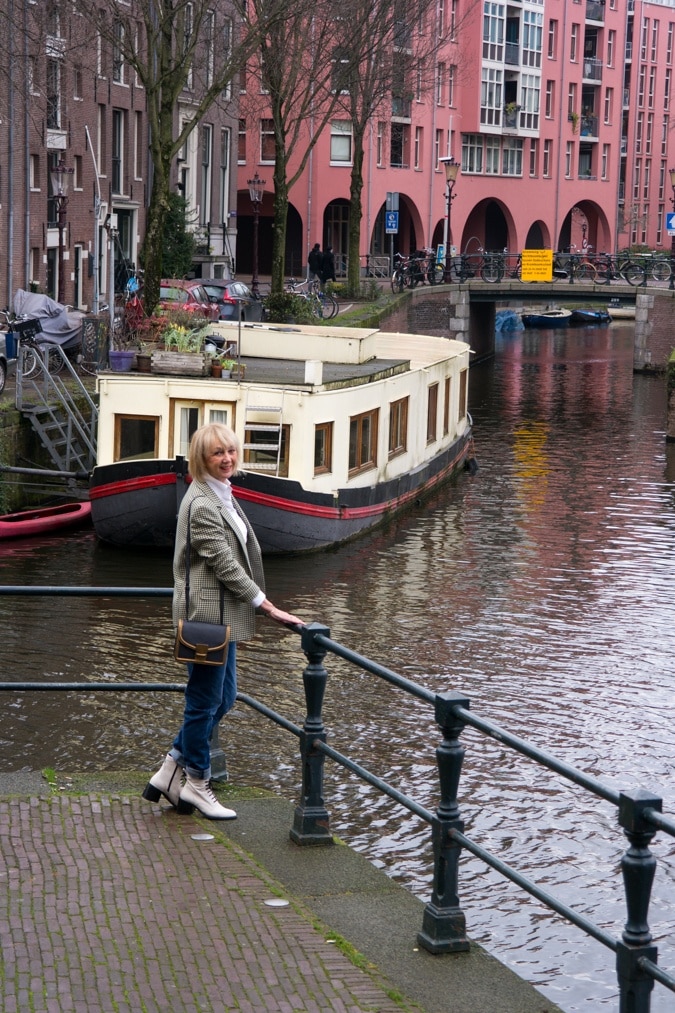 Below: Another “bird’s eye view” photo. Quite a good photo, Ron didn’t even give me short legs, which is the danger with such a shot. 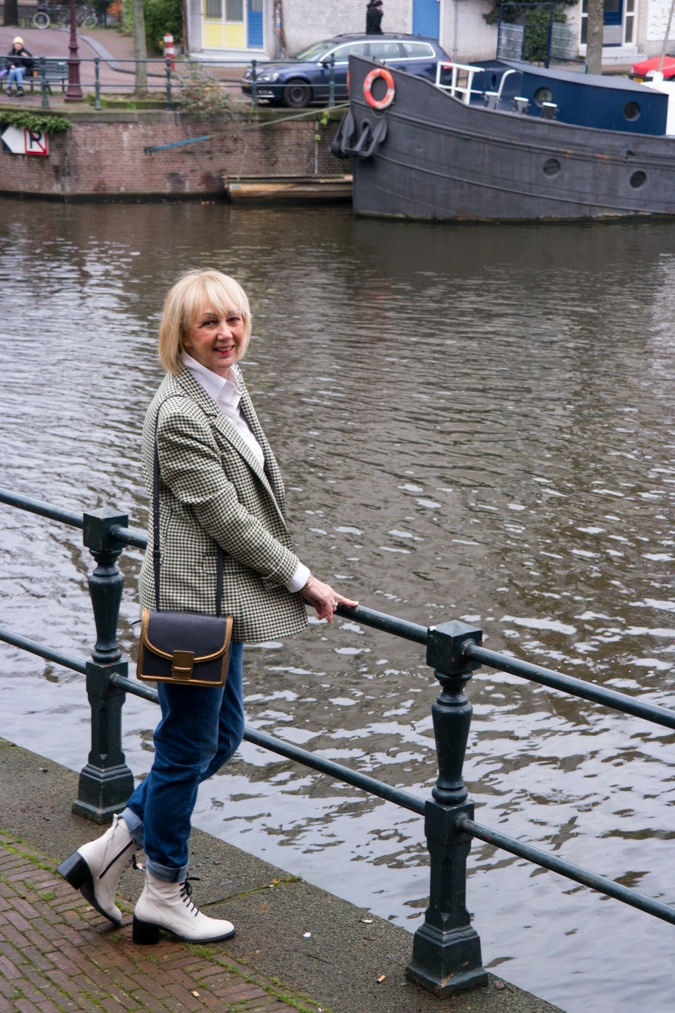 Below: We crossed the bridge over the canal to do a shot in the entrance of an alley with great ornaments. As I look stupid in these photos I didn’t include them. Call me vain. 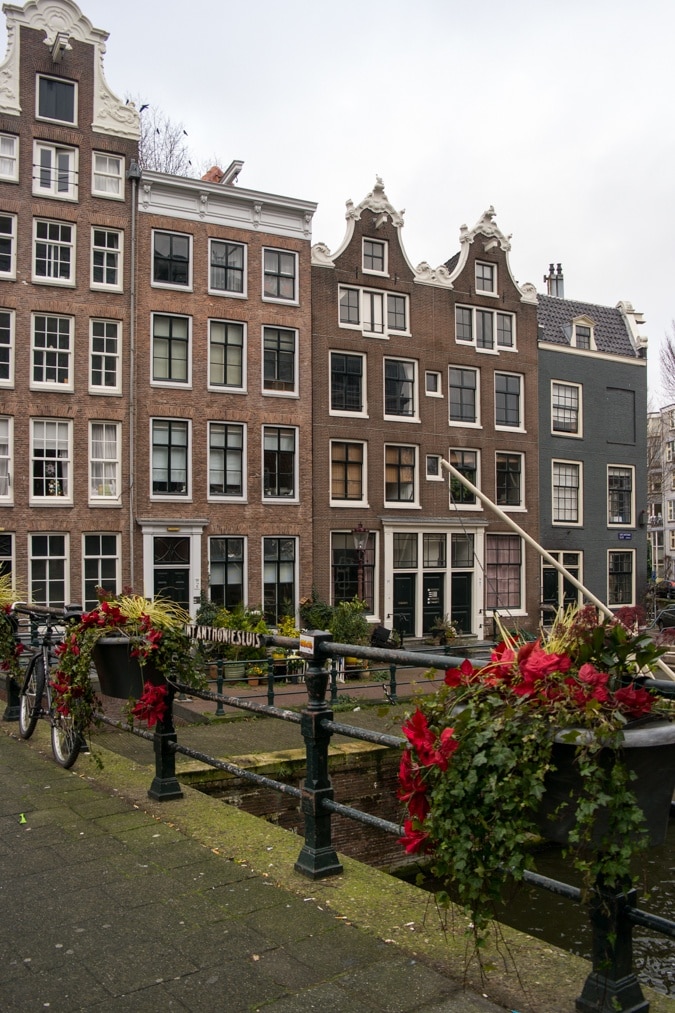 Below: Ron spotted these mannequins behind a window. Humour. 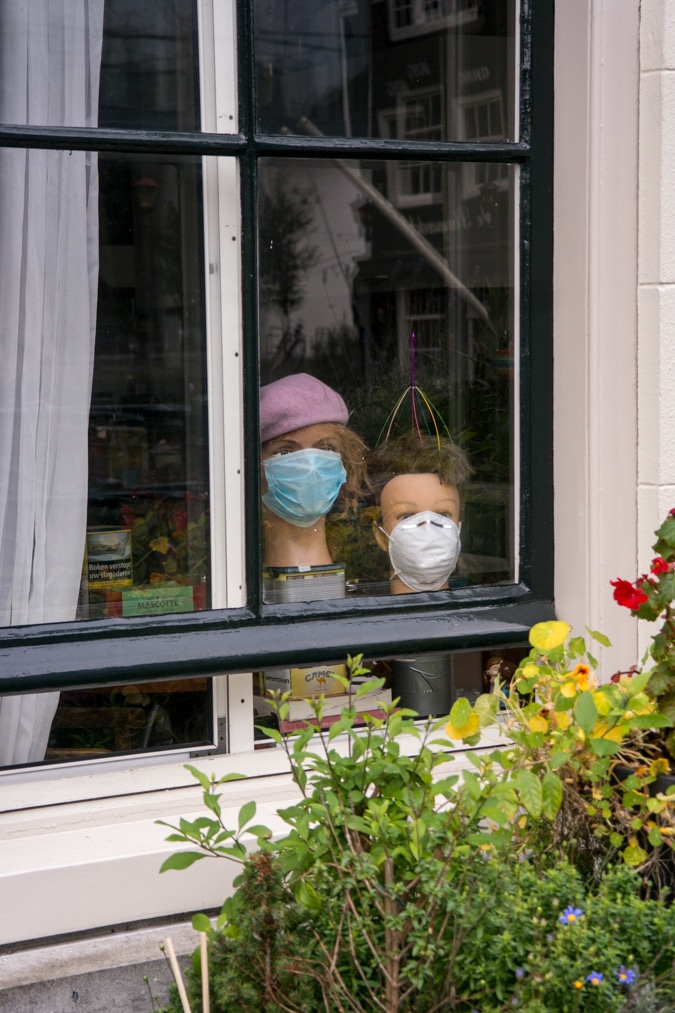 Not an awful lot. Life is getting duller and duller. Ron tried to spice things up and invited me to do a black and white shoot in a Second World War bunker. Not really my cup of tea. As a child I lived near the coast so bunkers were everywhere. We were warned never to go into them as the sand around them might shift and block the entrance. This happened once to a kid. So, the fear of bunkers was installed in my brain at a very early age.

We didn’t really know how to use the equipment as we are amateurs. After 20 minutes we decided to practice more at home before we try this again.

Below: The grainy and spooky result. 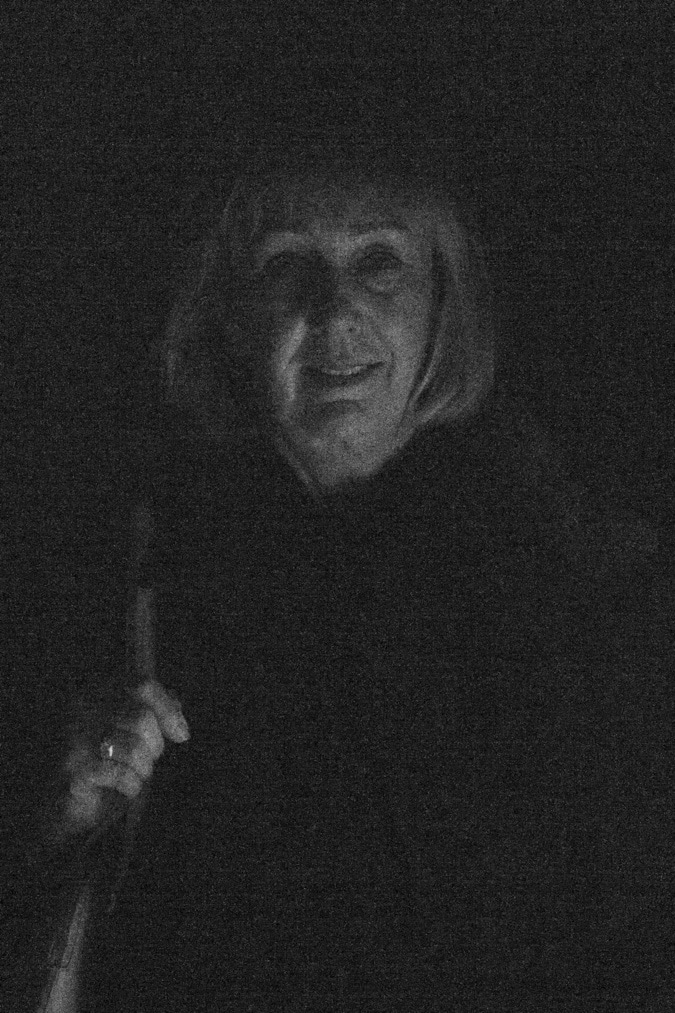 Below: Wore this outfit again. (Link to original post with the story who made this vest, first creating the pattern from a photo and then knitting it. What a monk’s work.) 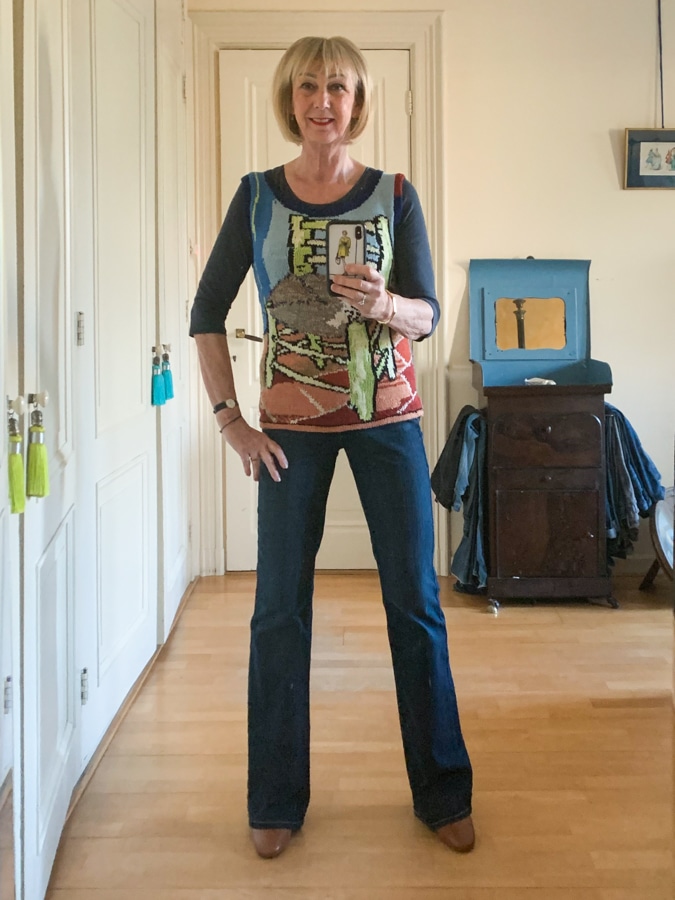 Below: This must have been the photo. 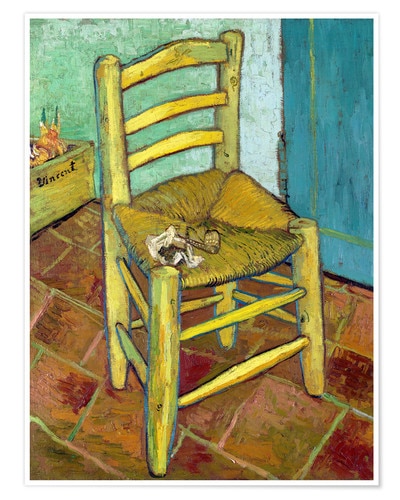 Below: I do rather bend the back of the chair haha. 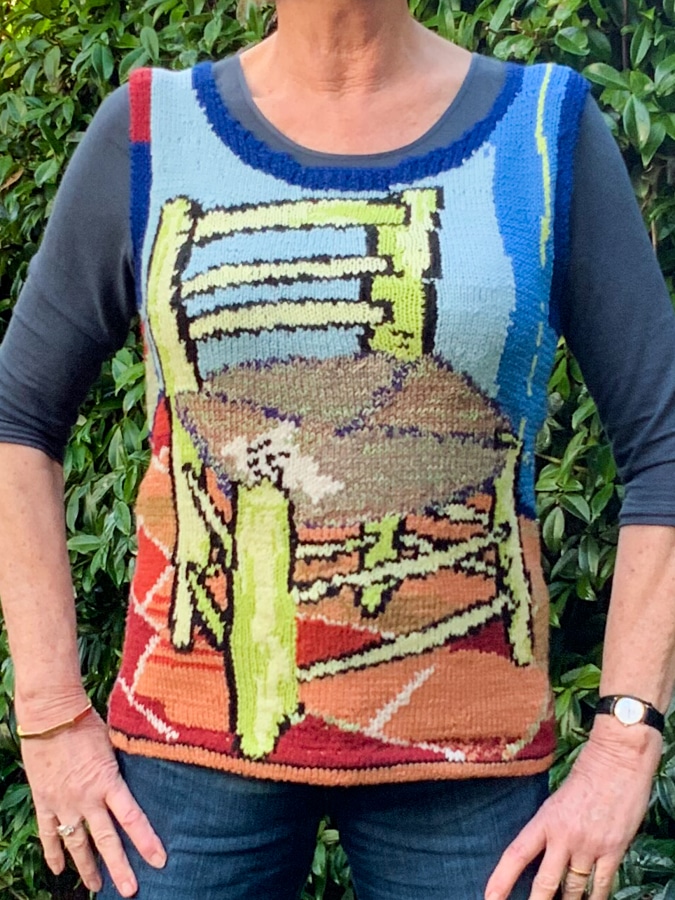 Below: At the back is the text: “How can I be useful. Of what service can I be? There is something inside of me. Whatever, whatever can it be?” Which is a quote by Vincent van Gogh. 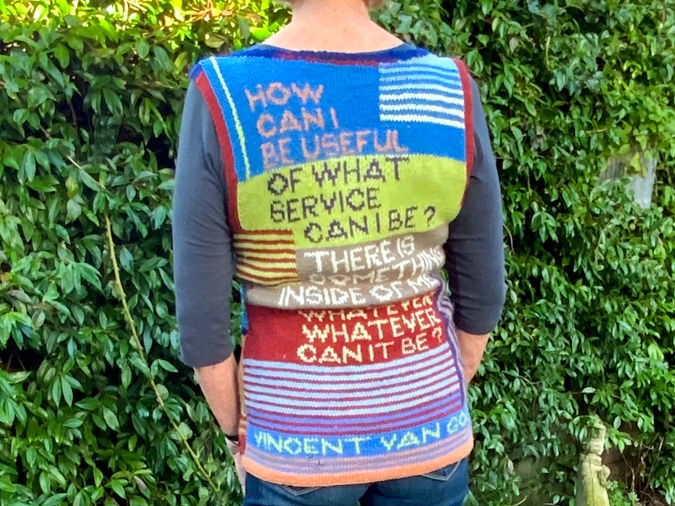 Sylvia of 40+Style came round for tea. It was our last get-together for a while as she is now back in Portugal. I wore my Hope Fashion fuchsia poncho to brighten up the grey days. (Link to original post.) I really like their stuff. 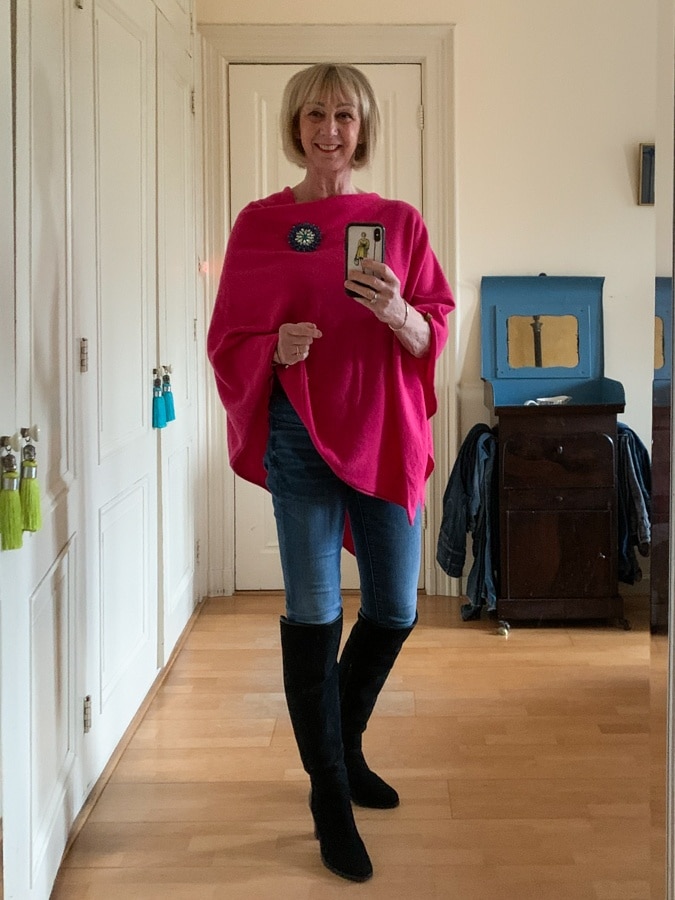 As a few readers suggested to try my gold and black jacket on jeans, I gave it a try. Even got a tip from reader Lauren to wear my golden boots with it. So here it is: 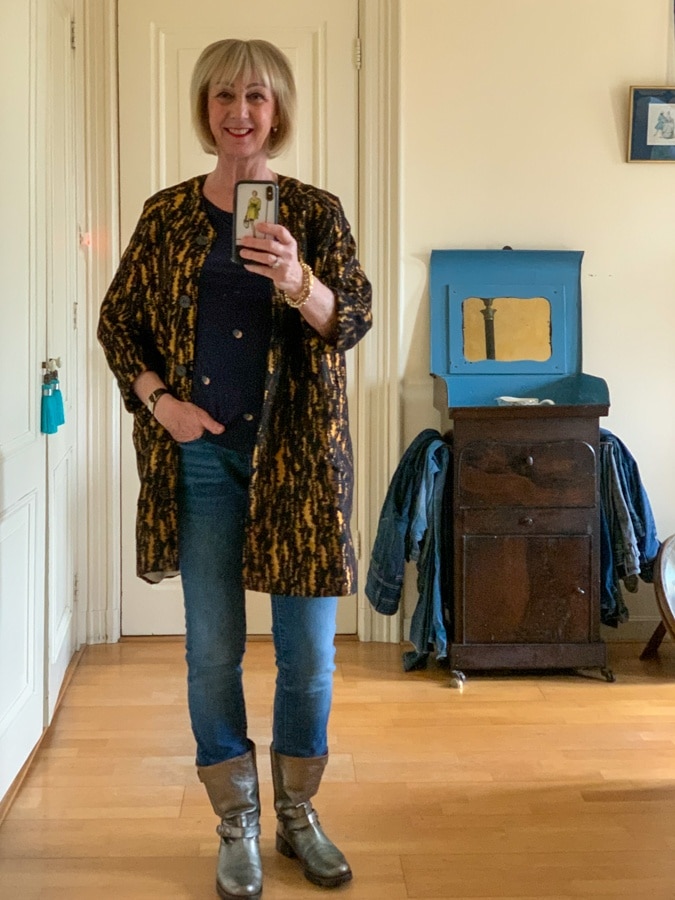 I say, it is better, but I am not convinced yet. Bloody comfortable though.

The Christmas tree is down and all other Christmassy things are put away as well. Took me 1 1/2 hours of hard work. To fill up the void of cheerful colours and lights, I went straight out and bought flowers.

I wore my sequinned jumper that day. Well…I took it off while taking down the decorations and put slippers on, but for the rest of the day I wore this. (Link to original post.) 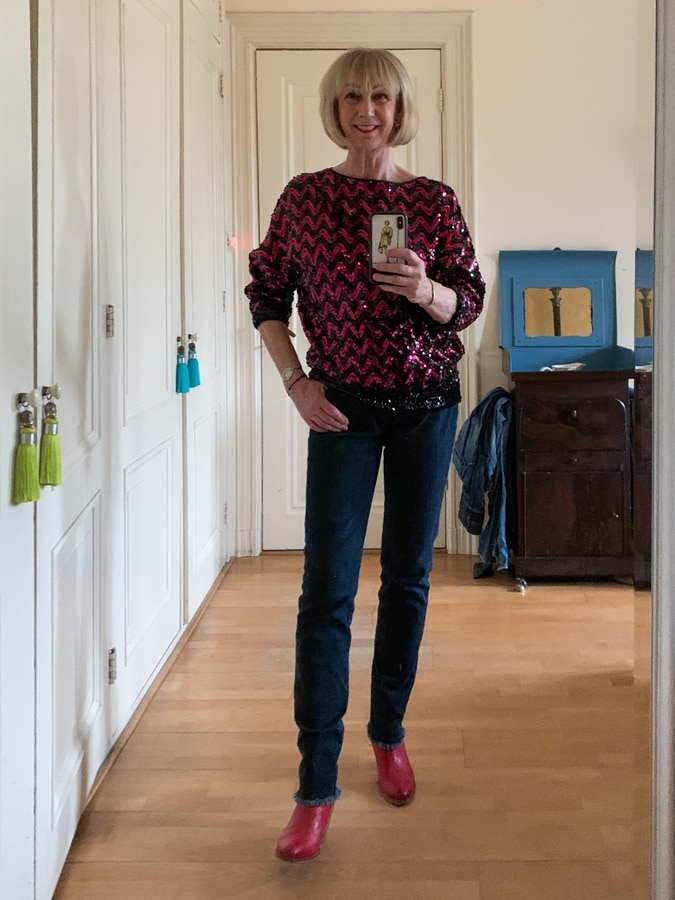 In the morning I cycled and because this jumper has 3/4 sleeves, it is pretty cold on a bike. Even with gloves on, the wind blows right into the sleeves of my coat. I fixed that by putting leg warmers on my arm. Ron burst out laughing and said: “Why don’t you just put another sweater on?” While I thought it was rather nifty. 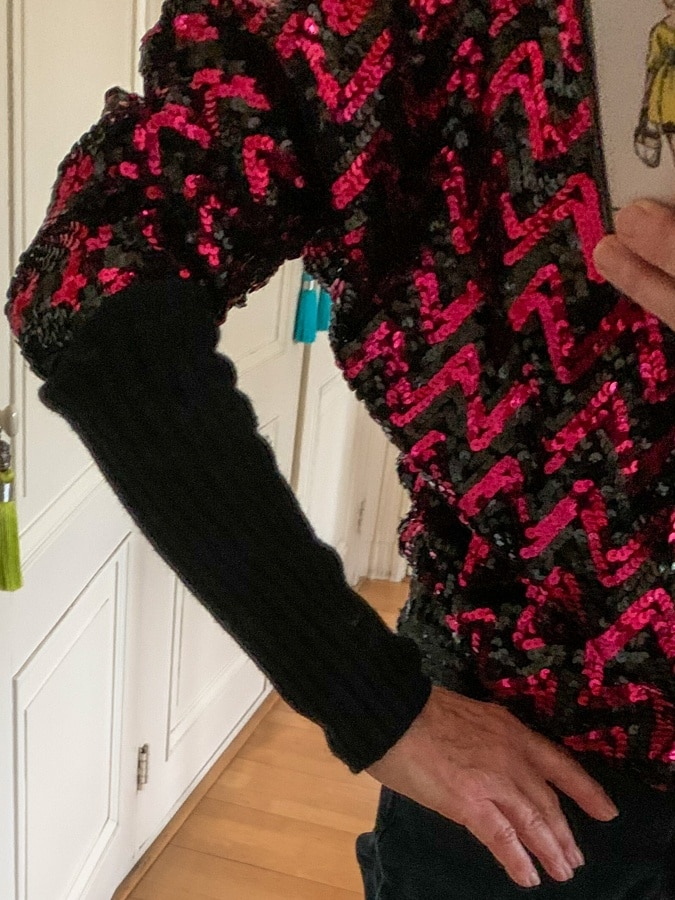 Speaking of Ron, here he is with Watson on his lap. That dog is such a lapdog and he is far too big for that. Look at him, spilling over on both sides haha. He is keeping an eye on me. 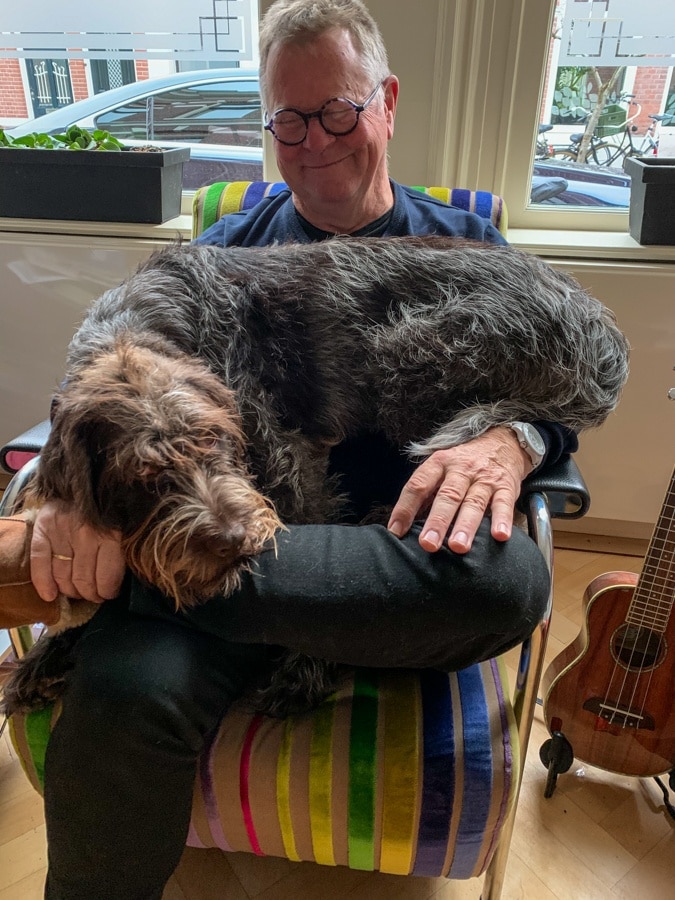 I have been sorting my pre-digital photos, selected the ones I liked most, categorized them and put them in an album. They only need sticking with glue. Although it was quite a fun job to do, I feel very old because of this. If you have anything of a life, you are not sorting out old photos. But alas.. retirement combined with Covid lock-down makes me an old fuddy duddy.

Below: Wore this outfit with my high heeled boots. Here is the link to the original post, which I quite liked. 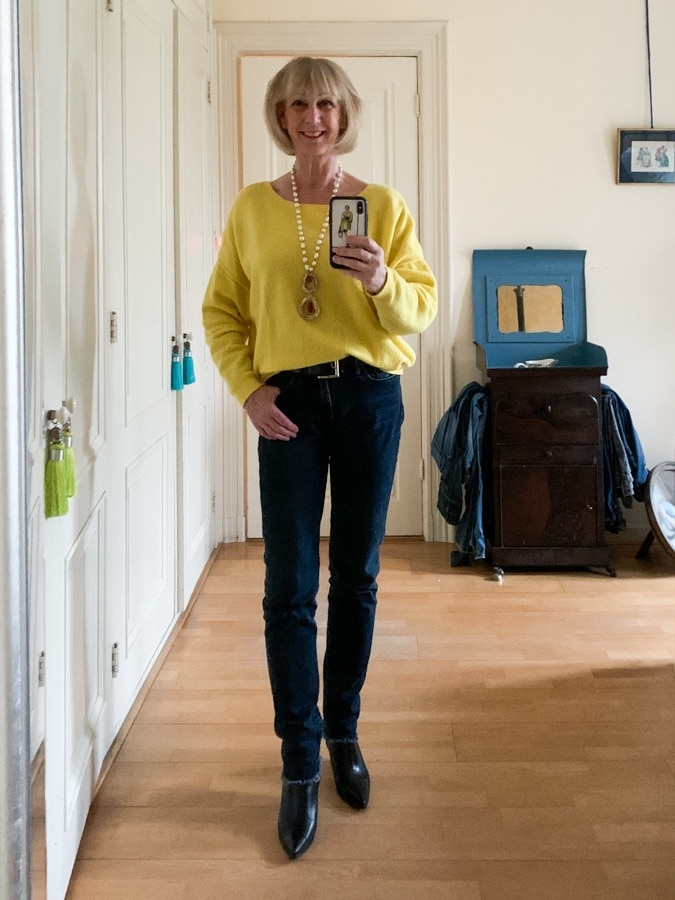 Below: Because I didn’t want to wash the yellow jumper after one day of wearing (I wear a top underneath it as well), I decided for this variation with boyfriend jeans and sneakers the next day. My knee said Thank you for the sneakers. Apparently I had been wearing high heels a bit too often. If you want to see more of the unusual sneakers, hit the link to the original post. 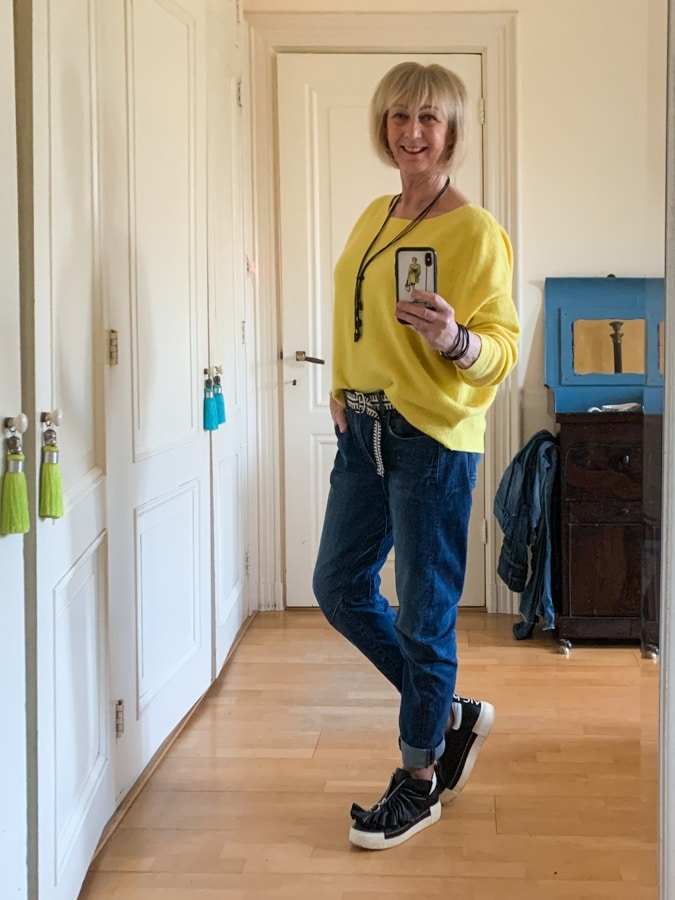 I am currently going through one of Sylvia’s book on photography and fashion poses. See a little difference in the photo above? Not all poses are to my liking. Being hunched with saggy shoulders might be very arty but doesn’t do me any favours. There are a lot of poses left to master though.

I cannot wear rings at the moment as I have to moisturise my hands a couple of times a day and that makes my rings greasy. My hands are like sandpaper now that the temperature is around zero.

Besides that one hour with Sylvia, I haven’t seen any friends this week and it is driving me nuts. So I sent some messages for dates, at the appropriate distance of course. I want to be very careful but at the same time remain my sanity.

Let’s hope the vaccine can be administered to everybody soon.