A flared black midi skirt in the snow 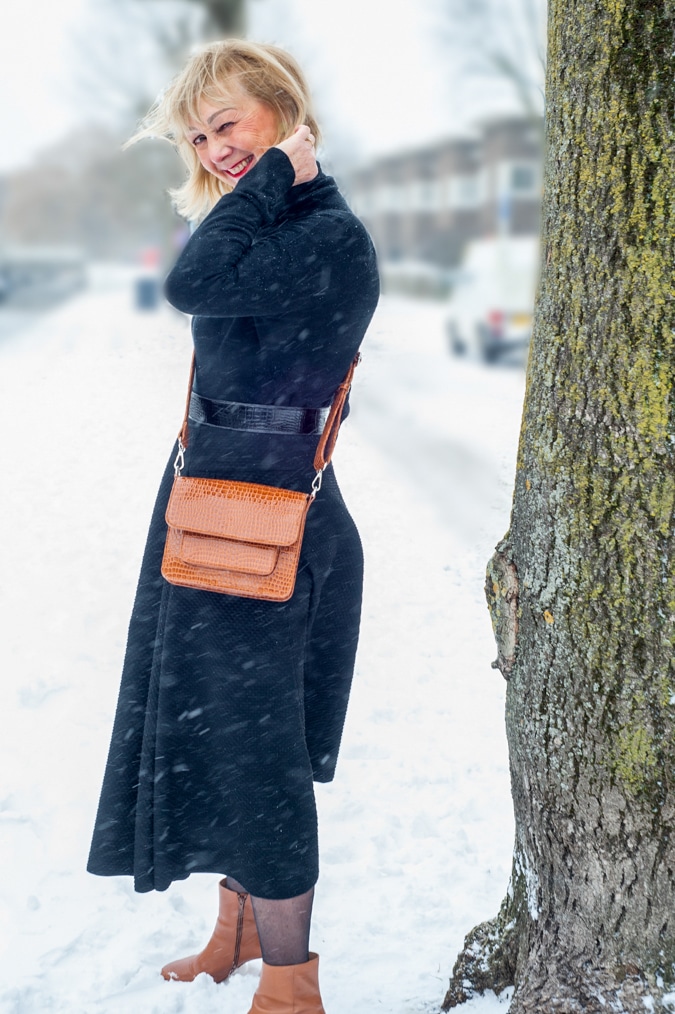 Something entirely unexpected on Valentine’s Day, a flared black midi skirt combined with a black cashmere turtleneck. And you are seeing this correctly, the photos were taken while it was snowing. The lengths I go to for you, my lovely readers…
Was it freezing cold? Yes it was.

We are having snow in the Netherlands and we haven’t had that for a couple of years. It will probably be gone in a week but it is still special to us. Kitty (my photographer) wanted to seize the moment and do a shoot with my all-black outfit. All-black on all-white is a challenge to photograph as it is difficult to get good contrast in as well the black as the white. Hurray for Kitty’s skills.

Below: Four photos of the snow taken by husband Ron. The first two are taken through our back door window into the garden. The third one is next to our shed and the fourth is my trusted bicycle in front of the house. 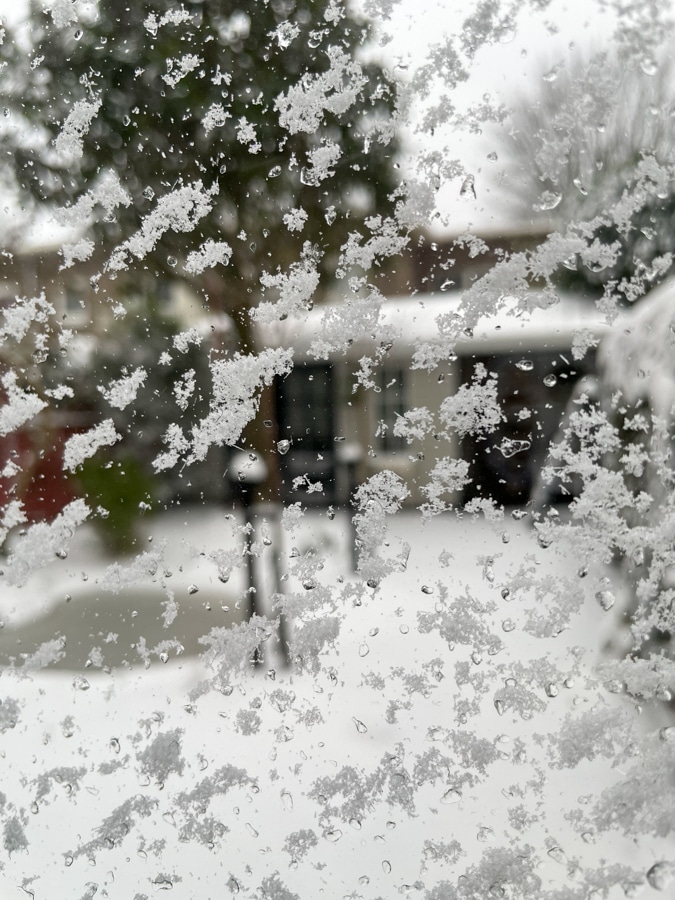 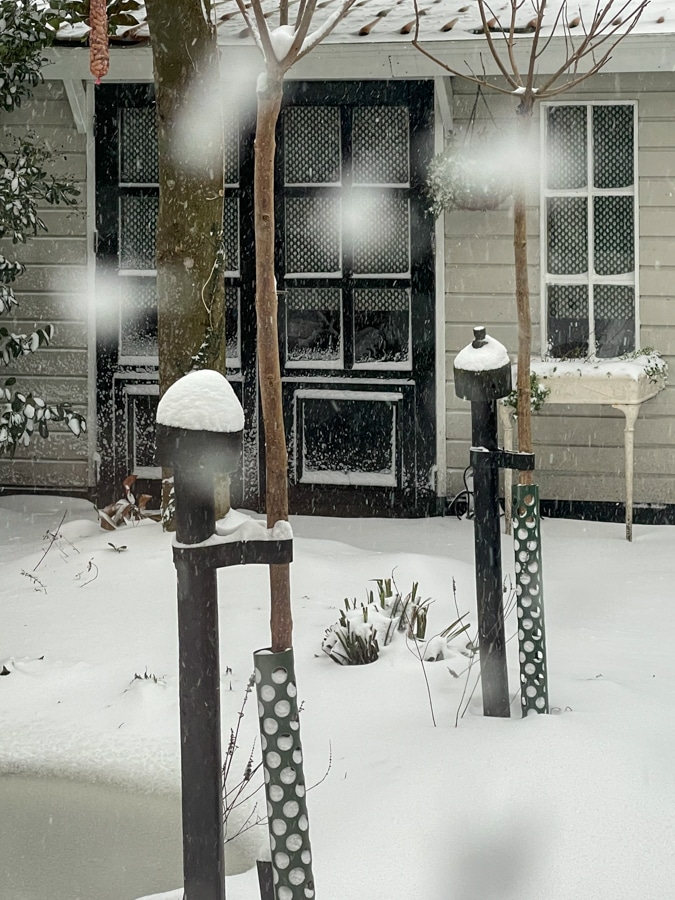 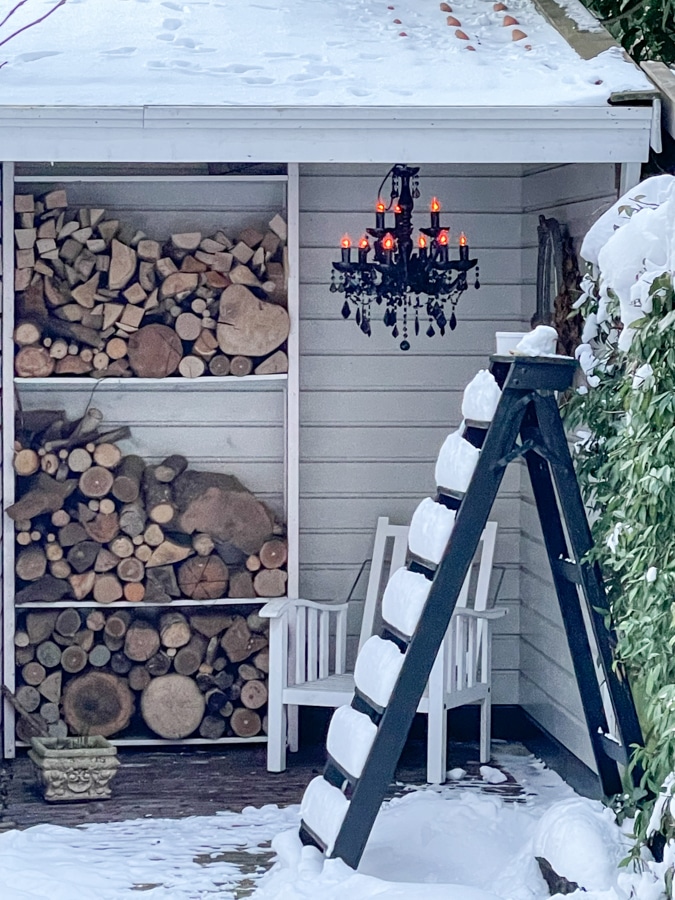 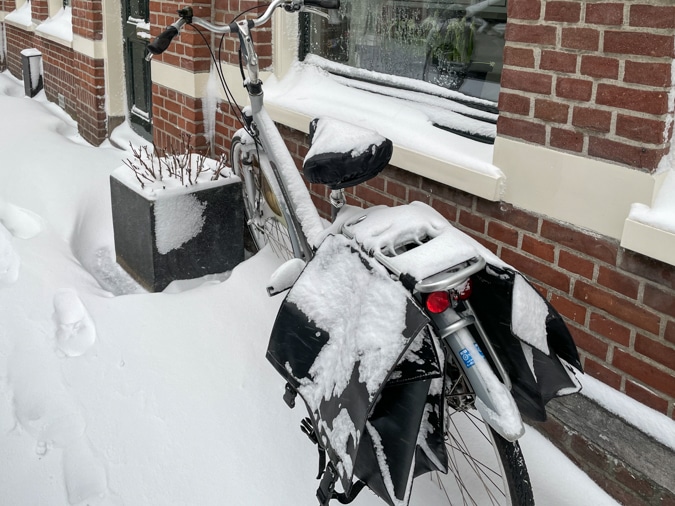 You get the picture. And this was only the beginning as it kept on snowing. With all that wet stuff falling down, I texted Kitty and cancelled our shoot as I didn’t think my hair would survive. And, as I said, it was bloody freezing. Then the feeling of guilt got the better of me. I thought to myself, if she wants to make the effort, so should I.

Kitty came to my house and as I stepped out the door, she asked: “Don’t you need a coat?” Hahaha… yes I certainly needed that, but the point was to photograph the outfit and there was no place where I could lay my coat. So very carefully I walked through our street on Kitty’s arm as my ankle boots are quite slippery (very new). Add to that the snow and a broken hip is only one slither away.

Below: First photo after having taken five steps. I think Kitty did a great job. The tan ankle boots and the tan bag are from kpa.haarlem and you saw them two weeks ago in my parking garage post. For this outfit I replaced the small chain strap of the bag for a crossbody strap. 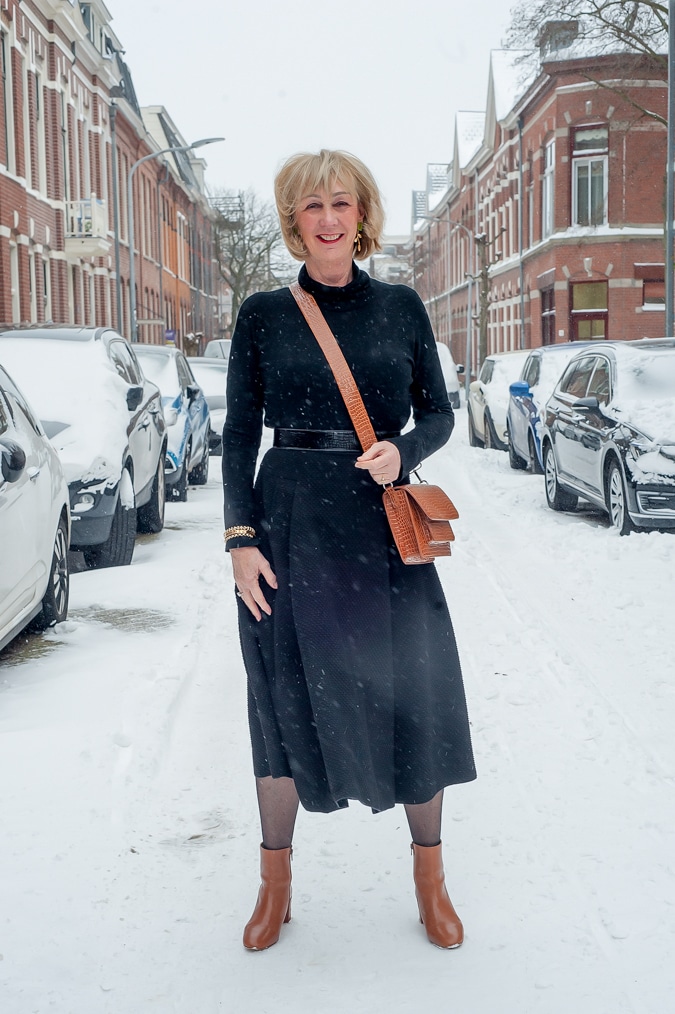 You might have spotted the earrings in the above photo. They are by (you guessed it) Lara Design. Marcella (the owner of Lara Design) and I both love these earrings. The button is made from green glass; the little branch of non-allergic metal is gilded with 16 carat gold.

Below: A close-up. As the outfit was pretty simple in the sense of no patterns, no colour, no frills or anything, I thought that these earrings would be THE thing to add. They also bring colour to my face. 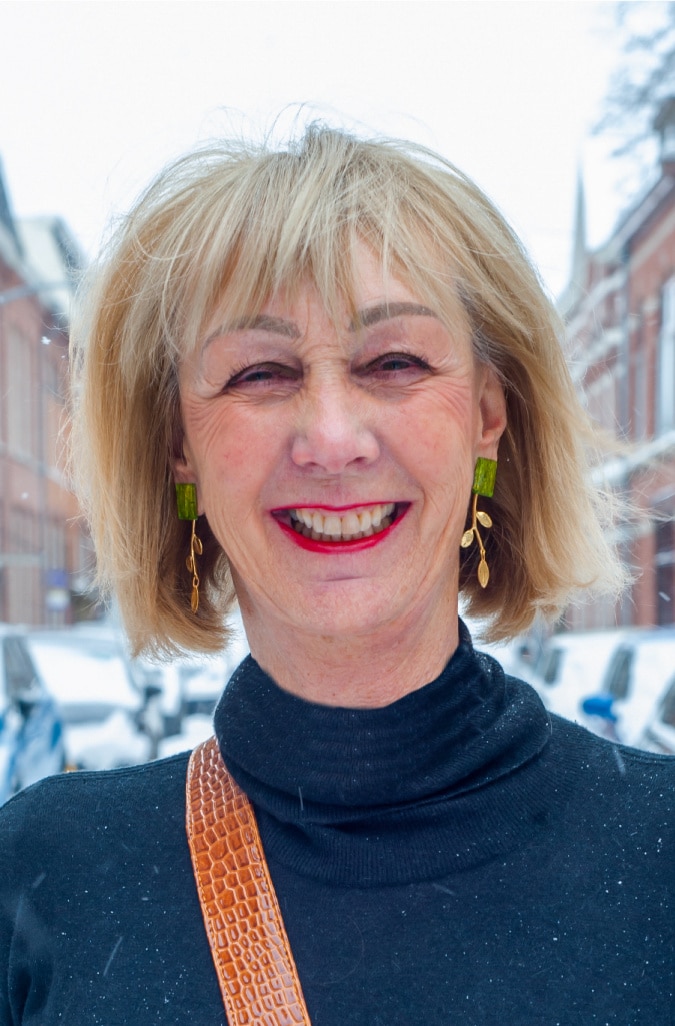 Below: A bit of a scary very close-up shot, but it shows the earring in detail. I was pleased that Kitty took the ‘head shots’ first, before my hair would fall to pieces. 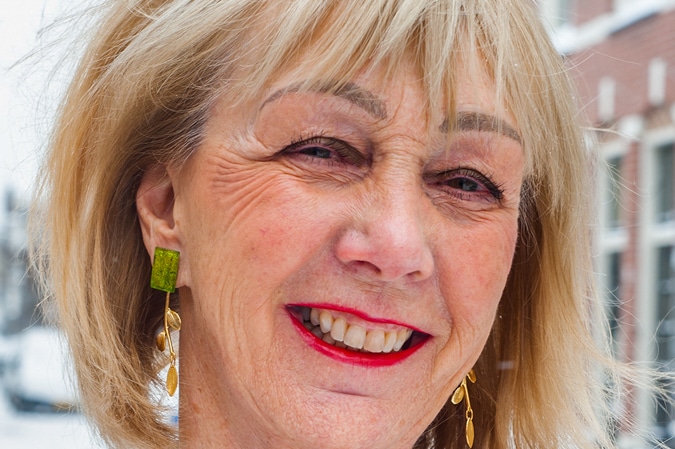 Below: I am following Kitty’s instructions to stand near the tree, trying to be creative with my poses. 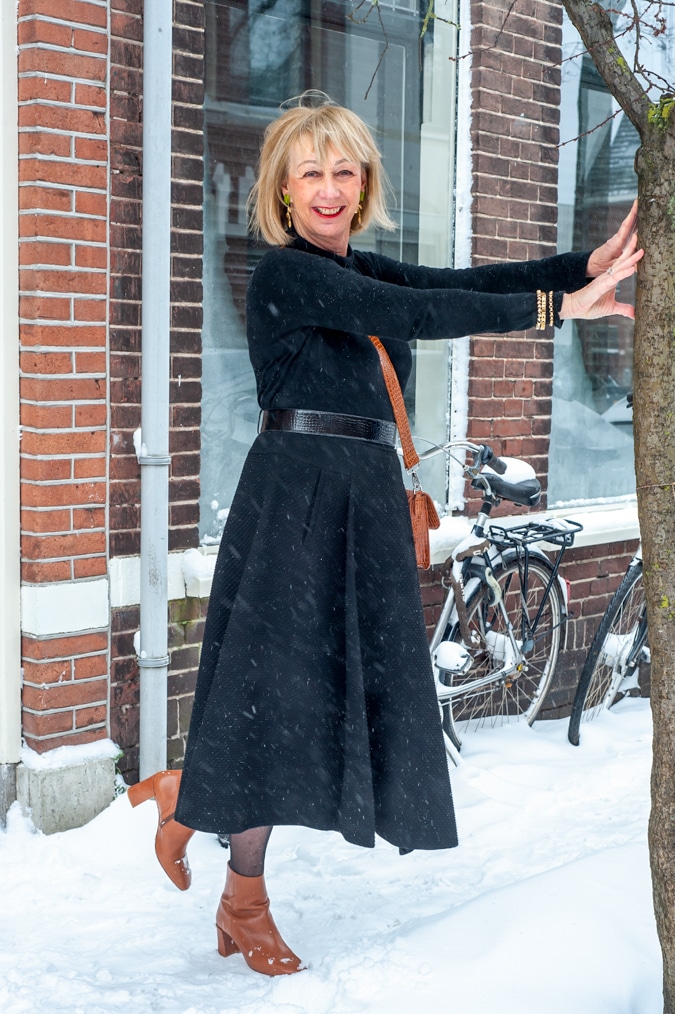 Below: I turned the clasp of the belt to the back as it was getting tangled with the bag strap at the front. It also created something to see at the back as it is quite plain there. The clasp should have been exactly in the middle of course, but we didn’t have time to fuss over such details. 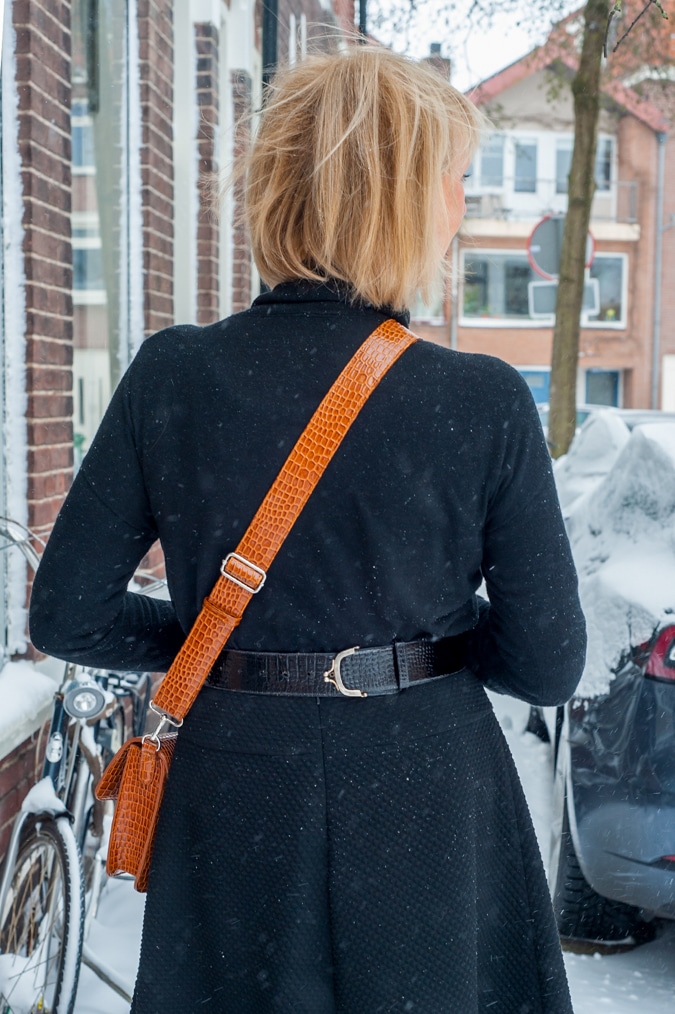 Below: Around the corner of the street on to the next street. The boots fortunately didn’t suffer from the snow. I had treated them with water-repellent spray. If you want to see this skirt styled in three more ways, here is the link to that post. 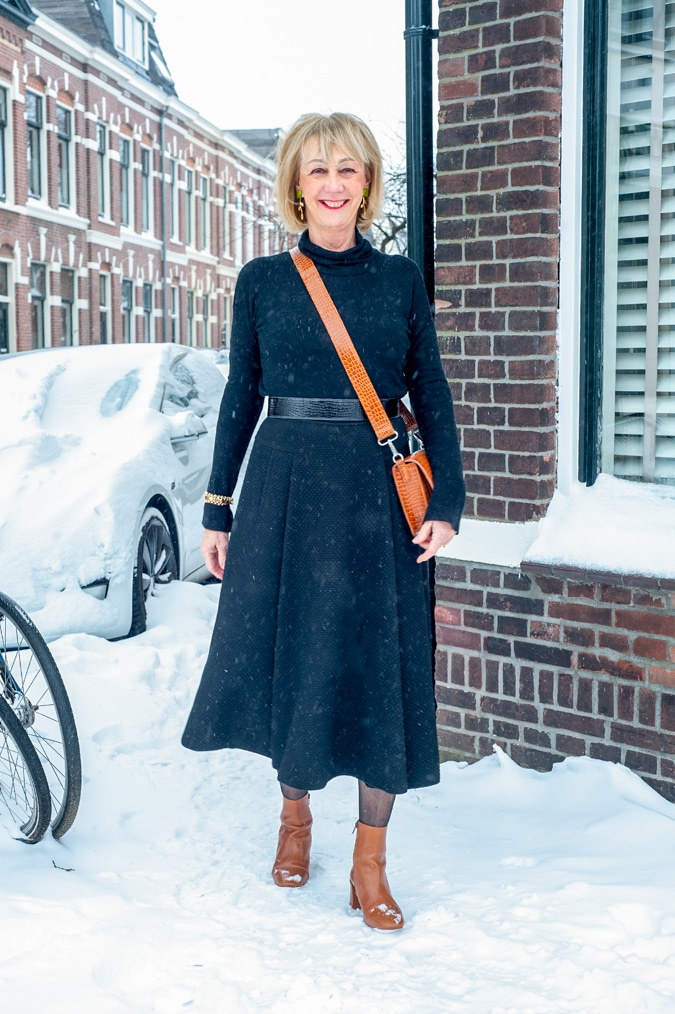 Below: At this stage, people were passing us, wearing thick coats, snow boots and woolly hats. We got quite a lot of cheerful comments like: “Life of a photographer isn’t easy”, to which Kitty replied: “Neither is that of a model” haha. The strange thing was that Kitty was freezing; her fingers were so numb she could hardly operate the camera and I was quite fine, not cold at all. So strange. I will admit that I was wearing a heat-tech shirt from Uniqlo underneath my cashmere turtleneck. (I haven’t put on extra weight, just an extra layer of warmth.) 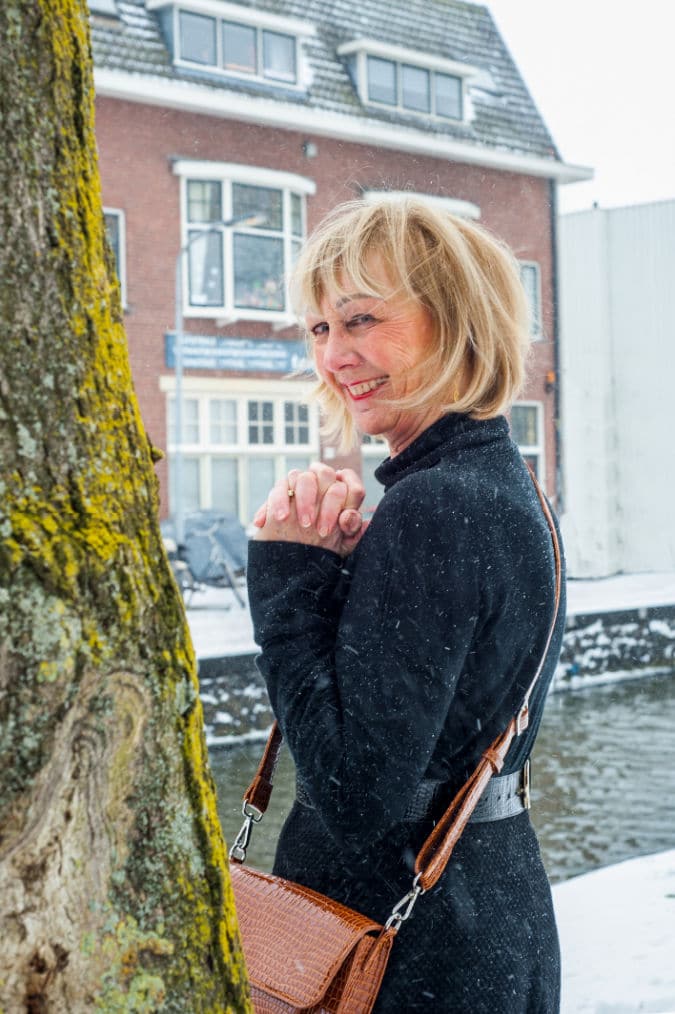 The whole shoot took 6 minutes, the fastest shoot we have ever done. We scooted back to my house, chatted and had some lovely cappuccinos. As we Dutch say: gezellig (= cosy, warm, nice, pleasing… there is no translation for this word).

On Saturday morning Kitty and I had agreed to do a photo shoot at the beach. Not near the seaside but inside a beach pavilion. It wasn’t snowing yet and we had the wind in our back as we walked from the car park through the dunes to the beach. You will see the shoot next week. It was a lot of fun. I am sure you will like it. We had coffee and lunch at the beach and returned feeling happy.

In the afternoon Loes came over for a cup of tea and a chat, always nice. See her below. 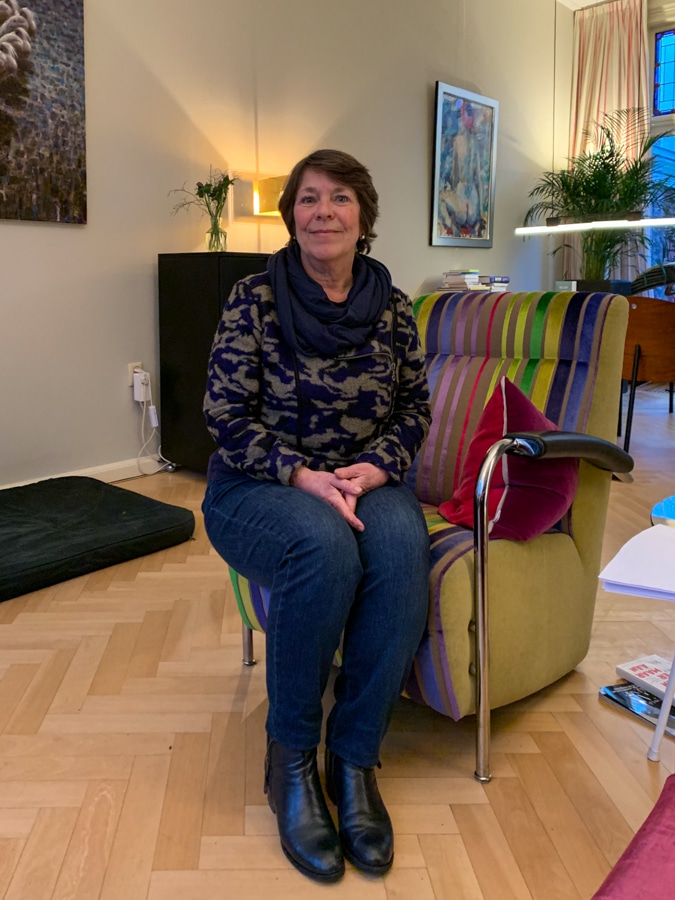 Sunday the storm and snow arrived. We looked outside and decided to dress warmly and curl up on the sofa.

Monday morning Ron’s view was me with a towel on my head and he couldn’t resist documenting it. This is reality for you, the naked truth. Luckily it is a bit of a blurry photo. What on earth possessed me to buy a grey morning gown, I don’t know. I think it had to do with the structure of the material. When the cat is on my lap, she cannot damage it, like she could with terry cloth. Still, I should have looked further as it is awful. 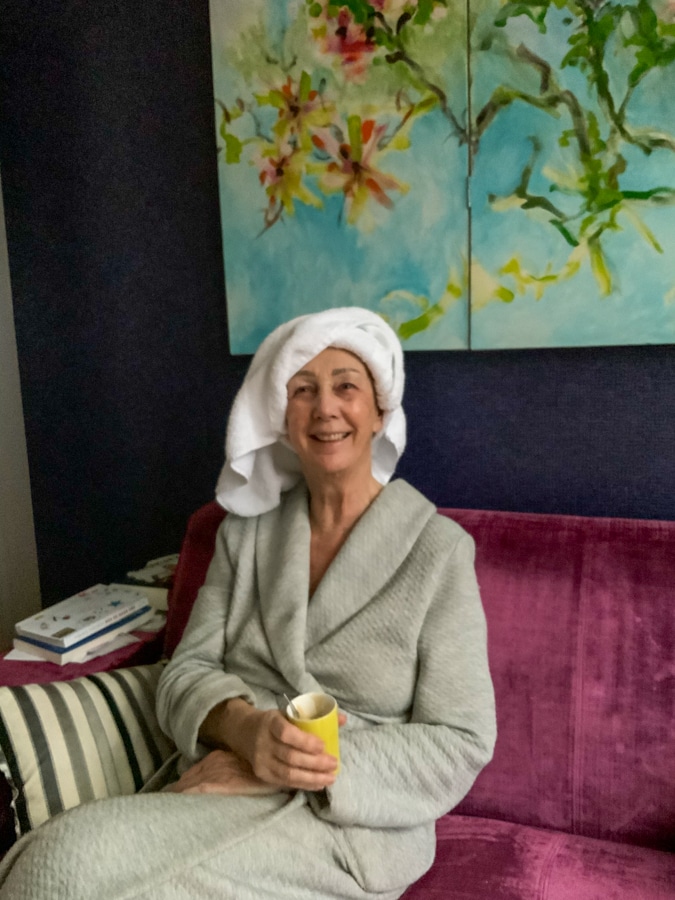 After “putting on my face” and blow drying my hair, Kitty came for the shoot of this post and for coffee.

In the afternoon Karlijn of kpa.haarlem dropped by to deliver a beautiful shirt which I had seen on her Instagram account. It fitted perfectly and I kept it. We chatted for half an hour or so before she went on to the next delivery. Tough job in the snow. She came by foot as the roads were too icy to drive or to ride a bike. Talk about service eh?

I could afford it, even though I splashed out on the earrings as I am saving money these days. I missed two appointments with my (expensive) hairdresser, I don’t need diesel (not going anywhere) and I don’t spend any money on lunches, restaurants or instore shopping.

Because I cannot ride my bike with the snow, I have taken up walking with Ron and the dog. Another way of keeping keeping lithe and fit. We wore our snow boots and took good care of how we walked. Old people and falling is not a good combination.
Otherwise I did nothing else but phoning with friends, social media, working on my blog and reading books.

And…(drum roll)…I have been putting up shelves into a shallow closet. When it is finished it will be my jewellery cabinet. For all my necklaces, brooches etc. YAY. The shelves even have a raised edge so nothing can fall off.
I found out that the last three shelves were not wide enough as the closet appeared to be wider at the bottom. Ron measured again and said: “You have to add 7, 8 and 9 to the width of the shelves for the last three.” So I ordered three new ones, mistaking the millimetres figures for centimetres haha. Came home and they were too wide! On my return in the shop, we had a good laugh and they sawed them to the right size. Pfff… I always had trouble with this. And to think I worked at a bank for 20 years. No worries, I was in advertising. The only mistake I made there was to give the figures of a newspapers’ circulation instead of the cost of running an advertisement in it. Never even dawned on me when I saw the figures.
Below the work in progress: 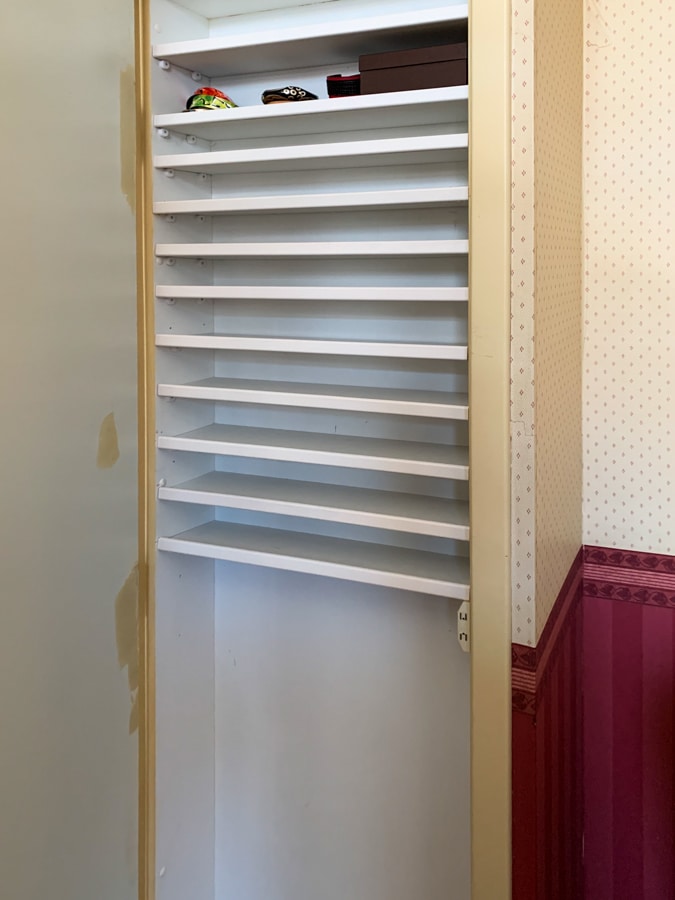 Below: This is an old outfit with a double-breasted jacket. Originally I wore it with a blue/black striped turtleneck. In this week’s outfit I changed it to a simple black top so I could wear yet another pair of new earrings. Silver square buttons with a bright yellow pendant. The bracelet is an old one, which combines beautifully. This is my kinda style. 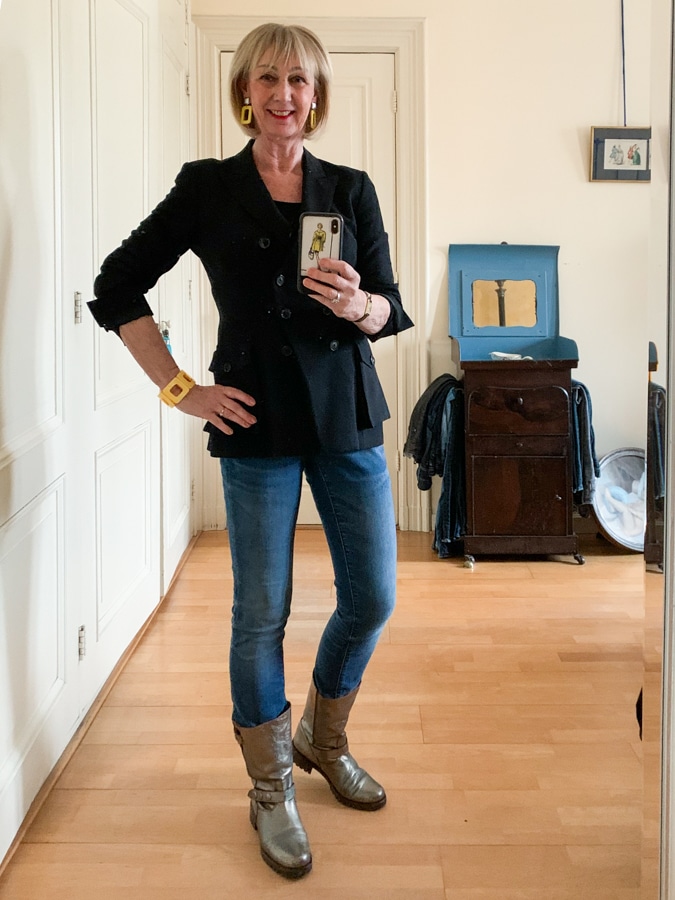 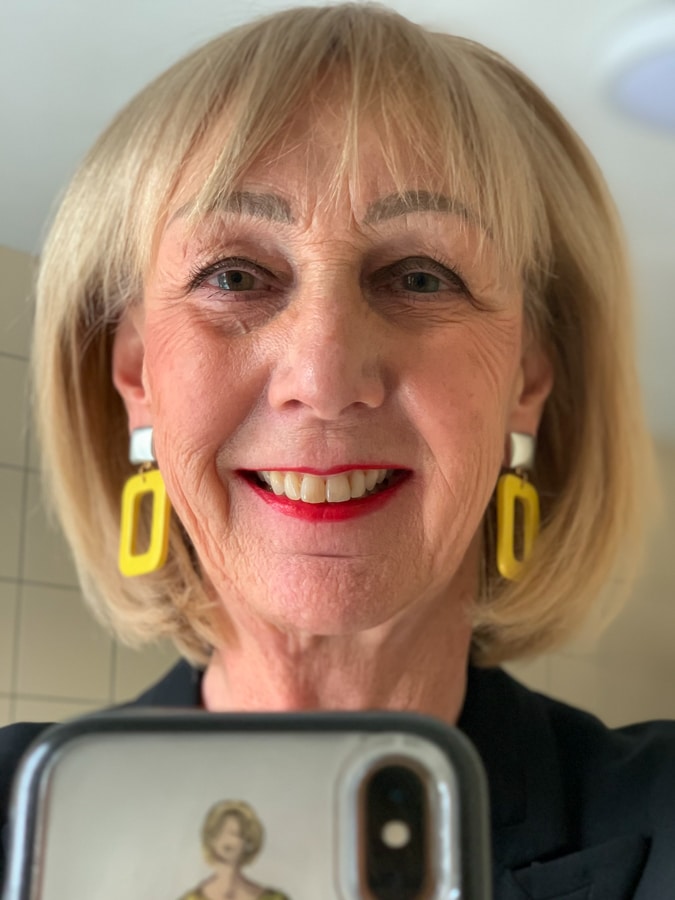 Below: Even closer. The earrings are by Lara Design.nl 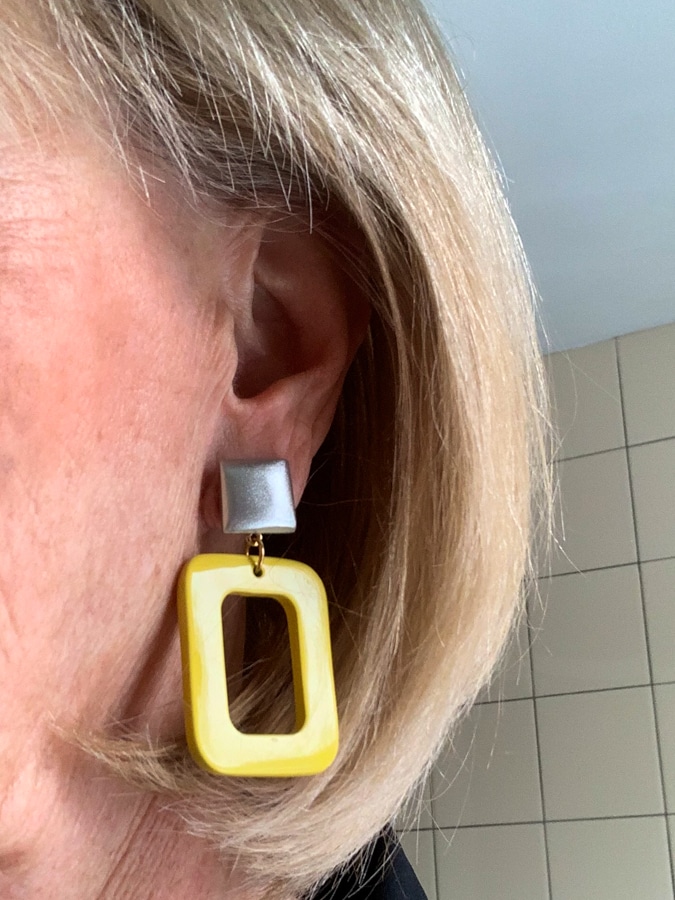 Below: The skirt is green and is a Dries van Noten. You can see it much better in the original post where I wore it with a V-shaped necklace. As a comment on that post, one of my readers (Lauren) said the necklace wasn’t right; that I needed one with a more modern vibe and I think she is right. Only I haven’t found a replacement yet. The one I used below isn’t right either. 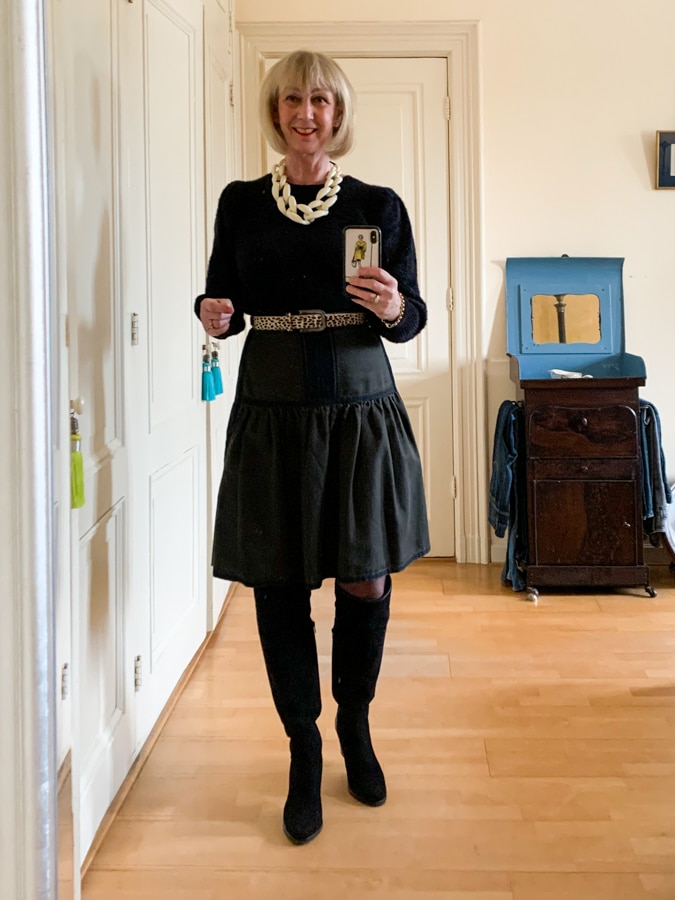 Below: Ah…good…some colour. Here is the link to the original post. 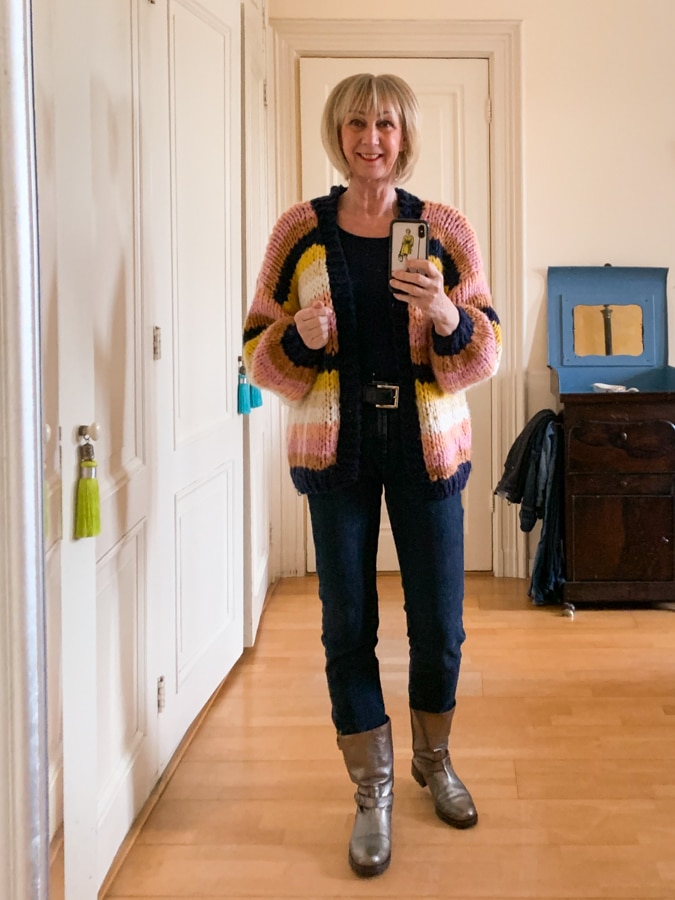 Below: I tried to brighten up the black with an orange chain necklace. I liked the original version better; it is in the post with 12 variations on grey skinnies with these leopard boots. The original version had a black and cream chain necklace (very little colour) and no turtleneck underneath the jumper. The jumper with its wide boat neck on its own was too cold. After wearing two black turtlenecks this week I am done with them. They seem to emphasize the wrinkles and my long neck. Not my cup of tea, no matter how much you would disagree. 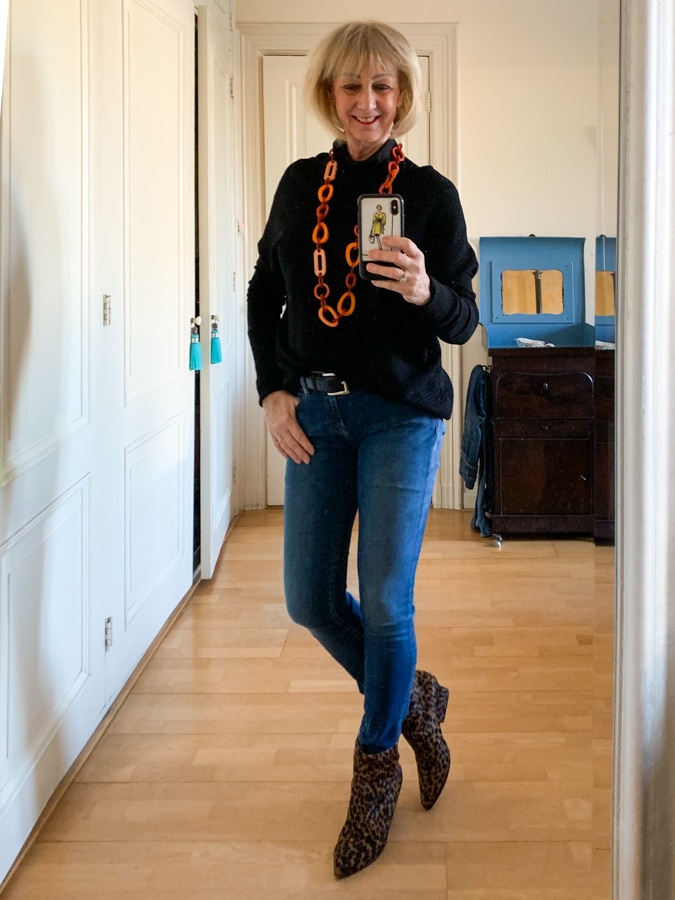 Below: Instead of the arrow shaped brooch on this khaki jumper as in the original post, I wore the orange brooch. 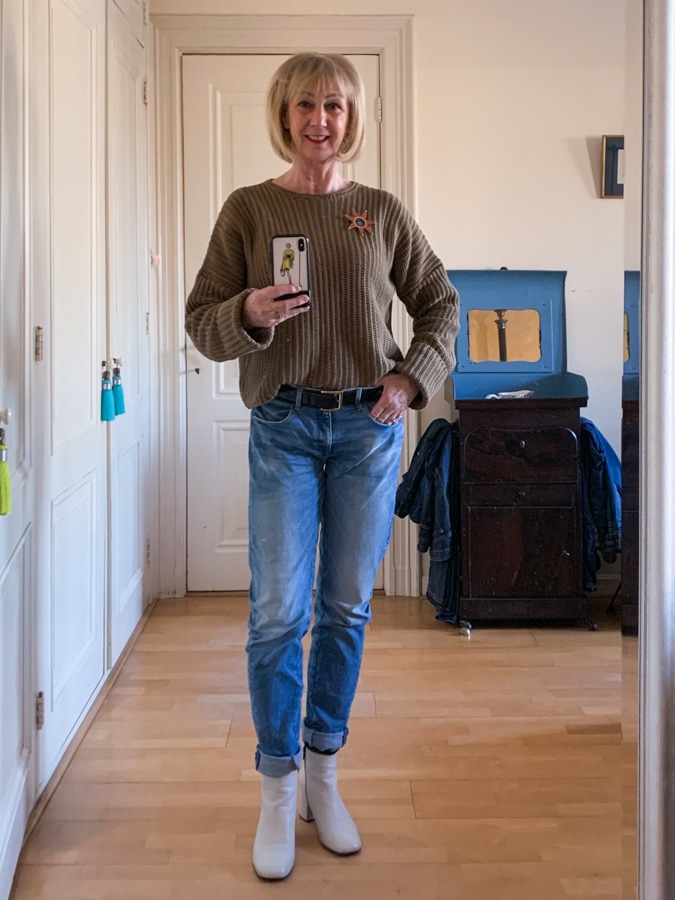 The jewellery cabinet is now finished and I am pretty proud of myself. It contains a lot of my jewellery but not all of it, I am ashamed to say. There are still brooches and necklaces on the mannequin in the bedroom and necklaces in boxes. But at least I have everything that was scattered all over the place in my own little room, in one place now and on display.
Next week I will have tidied up everything and I will show you a photo of the result.