In fall you were all very enthousiastic about this orange leather skirt worn with peeptoe shoes. It is not difficult to combine it with winter clothes. Just throw on a black sweater, black tights and black boots or shoes and Bob’s your uncle. I did that at Christmas, but it was a bit too easy. Together with friend and neighbour Anja (Curly Traveller), we came up with this outfit.

Just in time. As Saturday morning there was no outfit chosen, no photos shot and no blogpost made. Which is unusually late for me. I like to go over a post at least three times on different dates to edit the text. Which requires me to have a post ready ultimately on the Wednesday before publishing it on Sunday. Luckily husband Ron had found a spot with a lot of interesting graffiti, which would make a nice background. Knowing the background, I opted for an outfit with no prints as there would be many patterns behind me. After all, it is not very likely that a graffiti artist would spray paint a wall in a solid colour, right? He or she would be a house painter.

Below: I looks as if this wall was screaming Aghh when I approached. Which according to the Urban dictionary is “the sound one makes when they see or hear something disgusting or scary”. 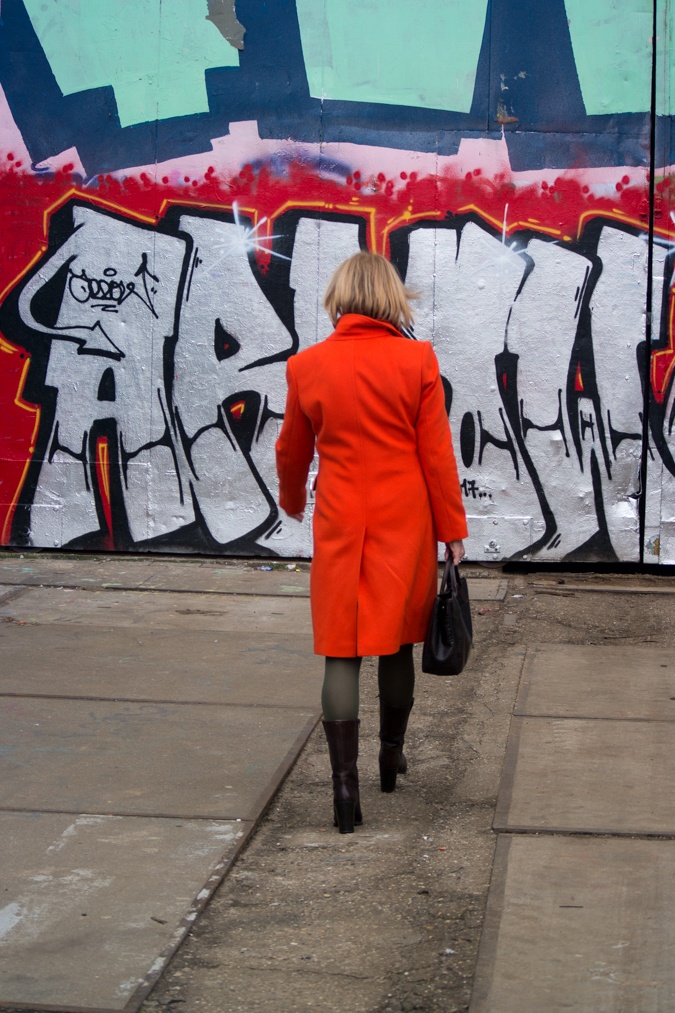 Below: But it said something different. Don’t know what exactly, as of course during the shoot I was too preoccupied to pay any attention. This orange coat made its premiere on the blog two years ago. It looked better in that post as it is just a little too short for this longer skirt. As my bosom has to fit in it as well, the front of the coat rises more than the back. Should have looked in the mirror before leaving the house instead of just grabbing this coat. 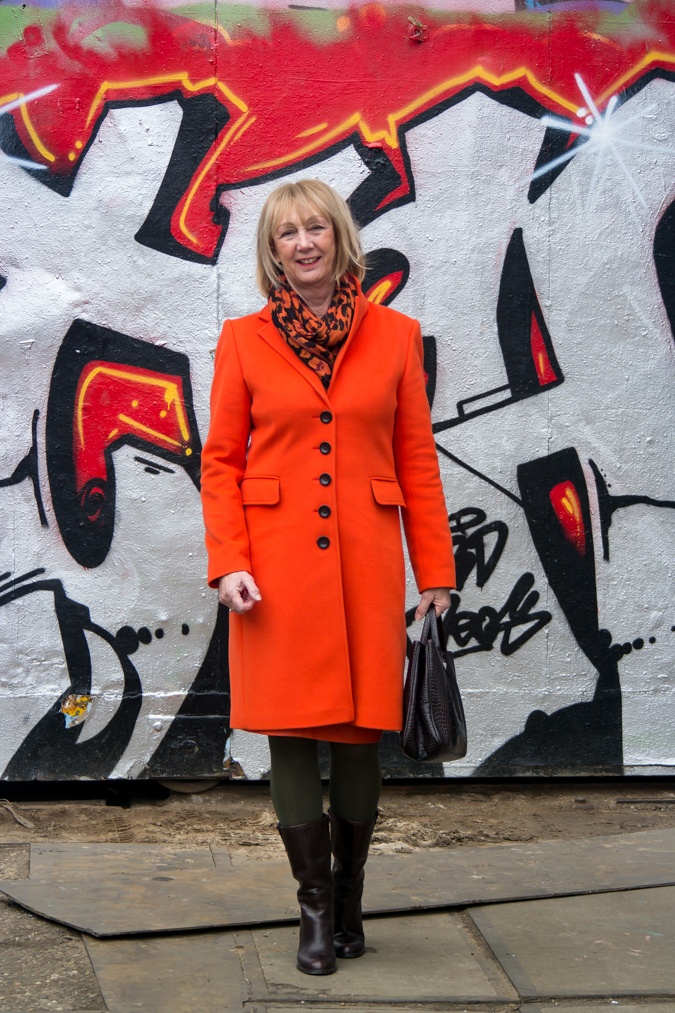 Below: The graffiti was fun. There were stacks of containers on an industrial site and all of them were spray painted. Even the ones high up. There were artist spraying as we arrived. Ron asked them but they didn’t want to feature in our photos haha. I thought as much when Ron suggested that. “You’d better ask them first…” 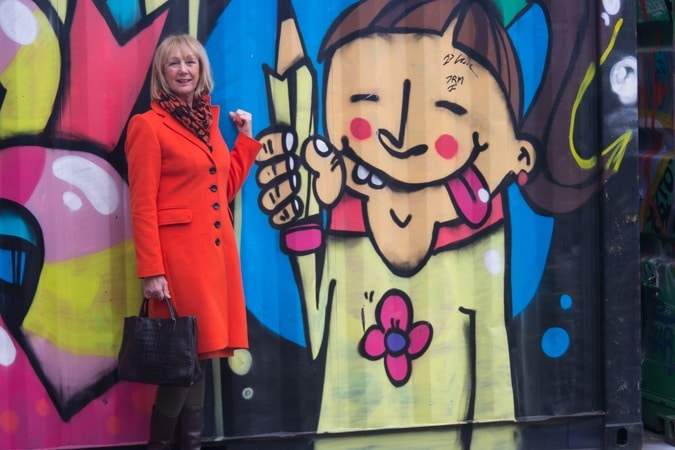 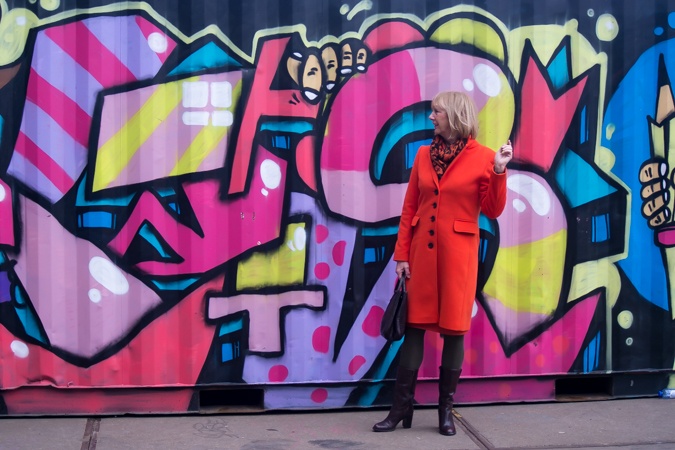 Below: Ahh.. yes. Applies to many things. 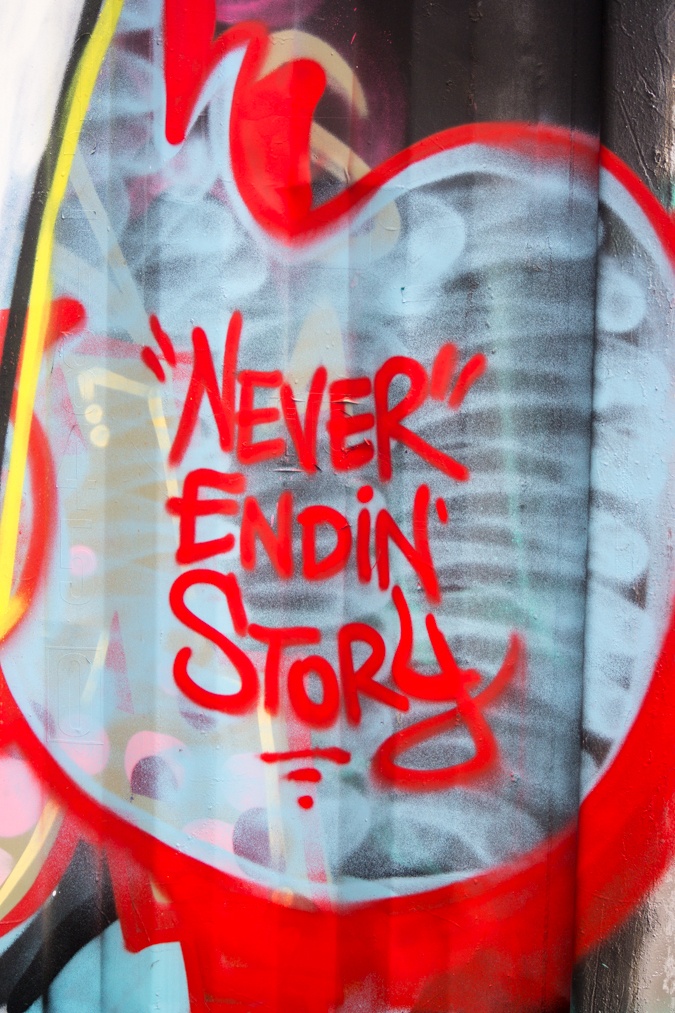 Below: On one side of a big building, the whole wall was covered with the work of many graffiti artists. 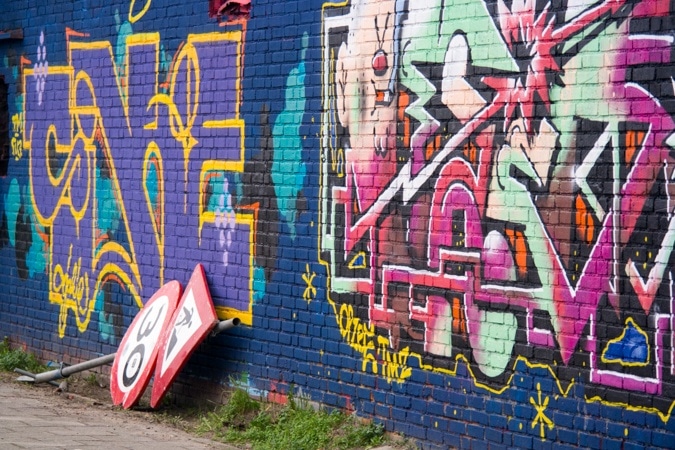 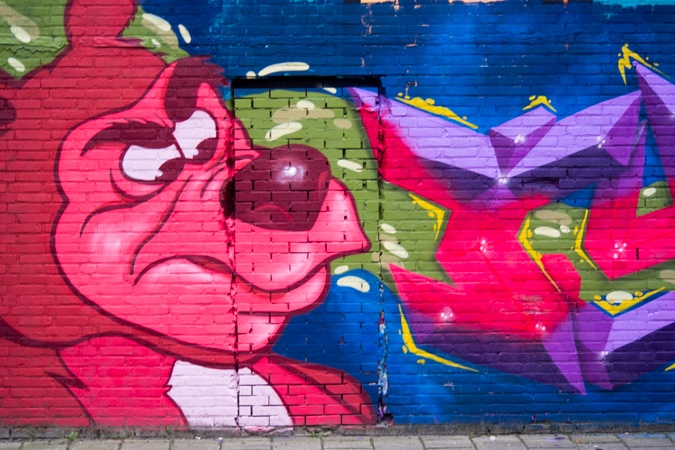 Below: Graffiti is not really “my thing”, but I can appreciate some of it. Not everything, but then again, not every painting in a museum is my taste either.

The site was pretty crowded (90% youngsters), considering it was a Saturday afternoon in the middle of an industrial area. Graffiti has its own fans. 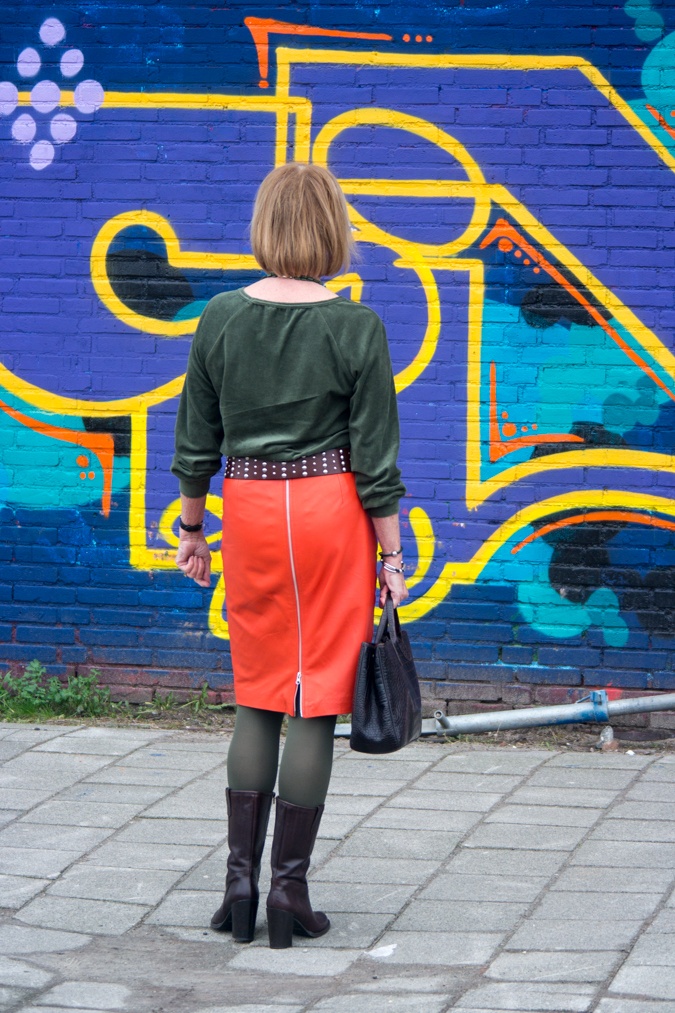 Below: The background is so colourful, you hardly see me walking past. 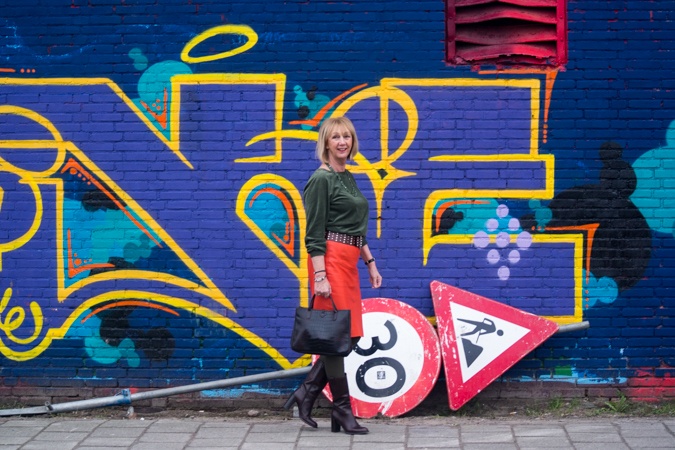 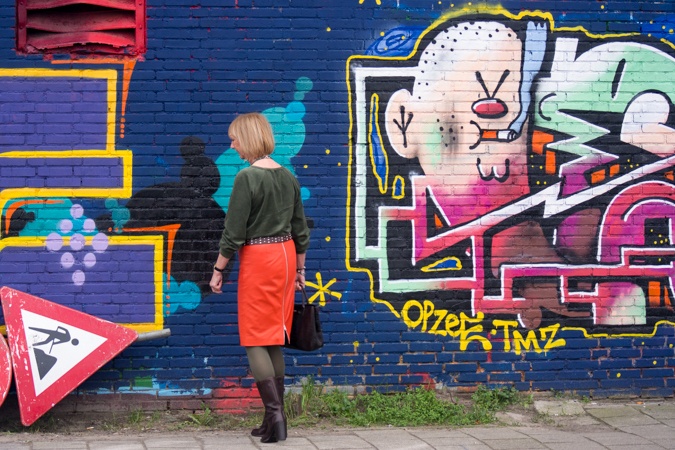 Below: Here is another photo where I almost fade into the background haha. And I should have kept my tummy in. Can you do that? I am forever trying to sit, stand and walk straight and keep my tummy in. I succeeded quite nicely for 6 weeks… well, succeeded.. there were a lot of moments I remembered to do so. But my brain has moved on to other things again. How do you do that? I know there are women who succeed in this. It makes such a huge difference in how you look. 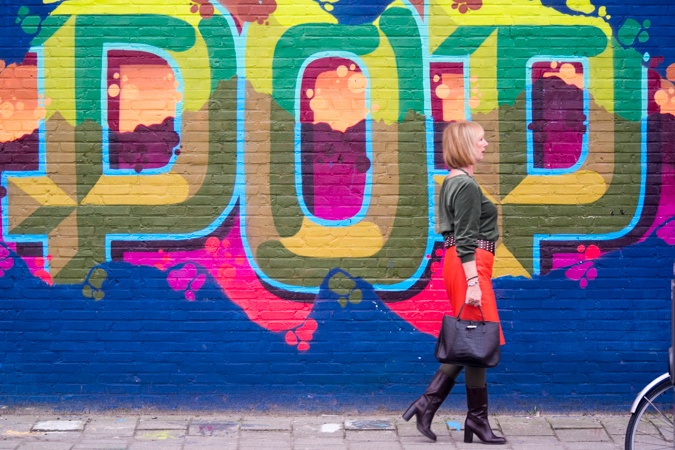 Below: Necklace: bought at an “antique” market, cost next to nothing. Bracelet: bought from a local designer at the beach in Spain, also very inexpensive. 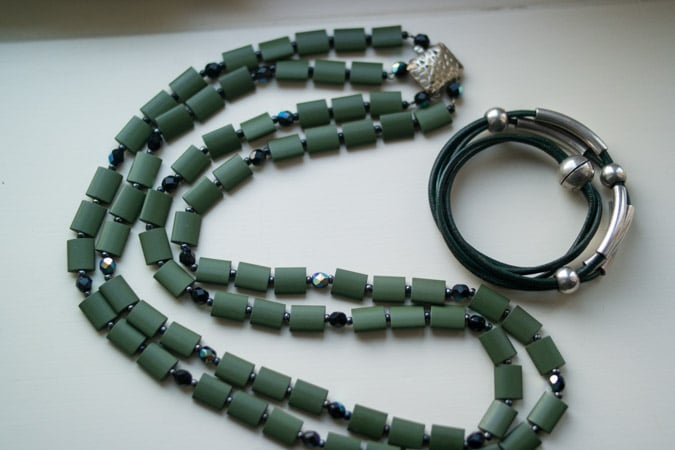 Below: And the details of the rest of the outfit. Sweater, bought at YDU, seen before in the post of Susan and me in Paris. Orange leather skirt. Brown boots, seen before with cream pleated skirt, with cream A-line skirt and here with a black pencil skirt. The belt is ancient, last worn with a cream pencil skirt and brown top. The bag is Longchamps from years ago. 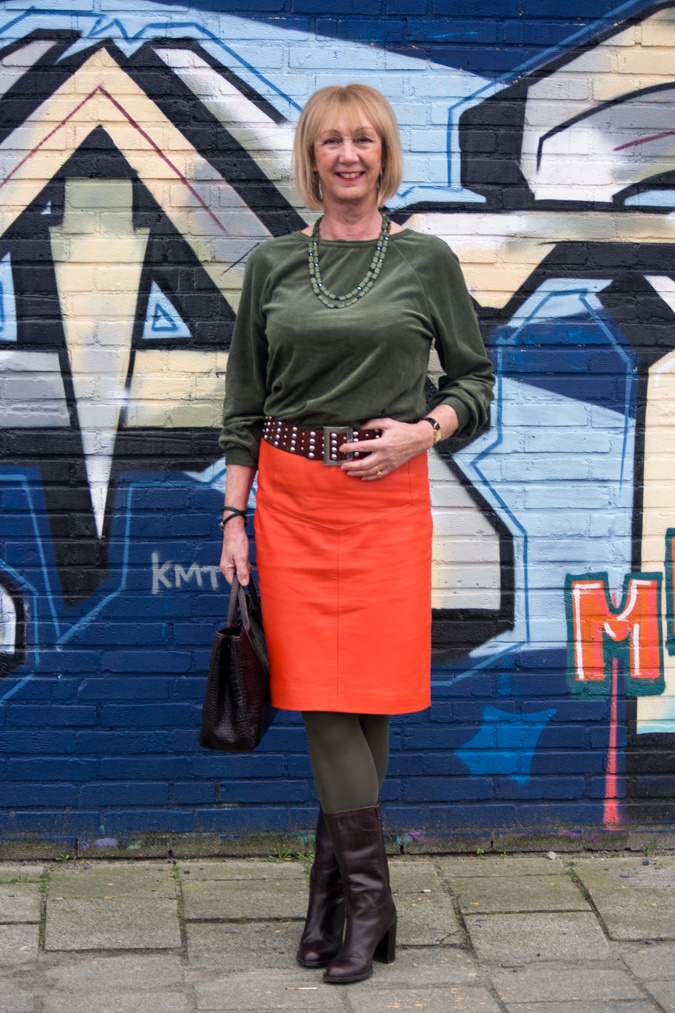 That was it for today. Not much to laugh about, but at least I am wearing a skirt for a change.